The auction, which is scheduled to place in Zurich and online on May 28, will also mark the first time a major watch auction house will drop the buyer’s premium and register its shares on the Blockchain.

The Audemars Piguet Royal Oak was among the first high-end sports watches made with a steel case. And, presaging the upcoming auction, a Royal Oak was also the first collectible watch that Ineichen CEO Artemy Lechbinskiy added to his own collection.

The Ineichen auction joins other 50th anniversary celebrations underway in auction houses and exhibitions across the globe. For example, the Royal Oak design is the subject of an exhibition at Harrods in London while Audemars Piguet itself is debuting a 39mm steel Extra-Thin 50th anniversary Royal Oak with a flying tourbillon, with a 37mm version set for release in late 2022.

Here are the top lots listed for the Royal 50 auction, slated for May 28.

This model boasts Audemars Piguet’s signature Tapisserie design transformed into a sunburst pattern (called Evolutive). More of the sunburst pattern can be revealed behind the sapphire caseback. From the back you’ll see a beautifully finished in-house Caliber 2950 with 65 hours of power reserve and Geneva stripes, emulating the pattern on the dial. This stainless steel version comes with a smoked blue gradient dial design.

This model, called Supersonnerie, produces loud and clear sound and is a result of eight years of research. Unlike most others repeaters, the Supersonnerie’s gongs are attached to a titanium membrane on the back of the movement. This membrane acts the same way as guitar’s soundboard, dramatically amplifying the sound and providing it with the most clear, pleasing tone. Apertures in the caseback allow the sound to escape freely.

The 42mm case crafted from grade 5 titanium is complemented with a titanium bracelet. Inside lies in-house Caliber 2953, a hand-wound movement made of 362 parts and beating at 3Hz. Made as a five-piece limited edition with a smoked blue Grande Tapisserie dial, the watch is among the most collectible minute repeaters.

Launched in 1999, only ten pieces were produced. Inside is the automatic tourbillon caliber 2875SQ, which was seldom used in the Audemars Piguet collection. Now discontinued, this artistic skeleton execution appears only in this reference. The 41mm case is made of platinum 950.

A transparent dial showcases the chiseled and engraved skeletonized caliber 2875SQ. The power reserve is up to 54 hours and visible via the sub-dial at 9 o’clock. Hours and minutes are indicated with an off-center main dial. The flying tourbillon is at 6 o’clock, and the date sub-dial at 3 o’clock.

This open-worked mechanical watch features outstanding technical and decorative characteristics of the skeletonized caliber 5122, one of the best traditionally skeletonized self-winding movements with art-deco aesthetics.

A refined open-worked perpetual calendar wristwatch in rose gold; this Royal Oak perpetual calendar watch communicates a certain era in the development of the Royal Oak collection – from 1997 to 2014. At this point, the dial incorporated the classic leap year indicator, but was still without the central hand to indicate the week of the year. 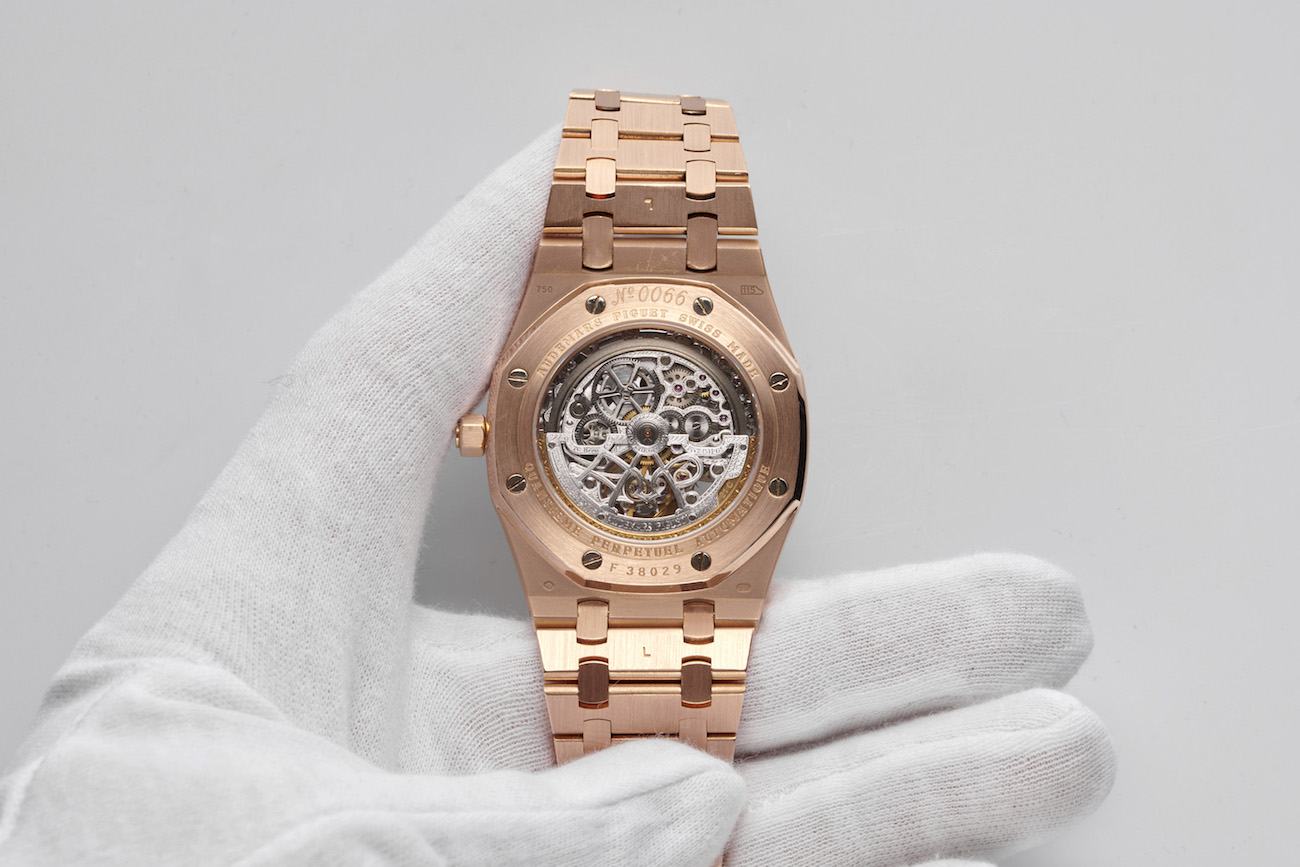 The latter is a customary feature of modern models cloned from caliber 2120/2800. The transparent dial with blackened-gold, leaf-shaped hour and minute hands on Royal Oak models is also rare, as is the all-rose-gold execution of the watch. The piece is no longer in production. It was succeeded in 2015 by the latest generation of 41mm perpetual calendars, featuring the number of the week indication via a special pointed hand.

The first open-worked perpetual calendar in the Royal Oak collection, produced from 1983 to 1993. At this stage in the development of the Royal Oak perpetual calendar the classic leap year indicator was absent from the dial. Ref. 25636BA is seldom seen on auction. The number of pieces produced was limited, with production discontinued in 1993. The case of this wristwatch is 18k yellow gold. It has a diameter of 39mm, and thickness of 8.3mm. The early Royal Oak Perpetual Calendar “stick” hands are noteworthy on the transparent sapphire (or skeleton) dial.

This platinum Ref. 25829PT is another rarity. It features a rare full-platinum case, bezel and bracelet. A collector’s item from the 1997 to 2014 era, its dial features the classic leap year indicator sans central hand for the week of the year. The transparent dial with leaf- shaped hands, which is unique to the Royal Oak collection, as well as the ultra-rare platinum execution makes it a priority for collectors.

The case in platinum 950, with a 39mm diameter, 9.3mm thickness, and transparent sapphire (skeleton) dial encloses the caliber 2120/2800SQ, and a self-winding, open-worked rotor with ultra-thin inertial segment in 21k yellow gold. The power reserve is up to 40 hours. This piece is mounted on a platinum Royal Oak bracelet with Audemars Piguet platinum double folding clasp.

The Arc, designed by De Giuli & Portier Architects, will measure a full 17,000 square meters divided between three floors and a basement where the technical rooms are located.

Construction work for the Arc started in the spring of 2021 and is planned to finish in 2025. The building allows long-term flexibility thanks to its modular layout and anticipates the company’s future needs. The two buildings also highlight the brand’s dedication to and respect for their environment.

The project has been developed from an ecological standpoint and incorporates a partial land use plan. A green roof will recreate an ideal biotope for insects and birds, while offering a panoramic view from of the Vallée de Joux’s meadows. The project will also benefit from a cutting-edge energy management plan. In addition to using industrial waste heat, the Arc will be connected to the remote fossil-free wood-based heating system, Le Brassus Bois, situated next to the train station. Photovoltaic panels will provide the Manufacture with an additional source of renewable energy.

Art Deco numerals enhance the vintage aspect, as do the pink gold hour, minute and seconds hands, blue chronograph hands and a blue transferred tachymetric scale. For 2020, Audemars Piguet has rearranged the chronograph counters, but retains the original watch’s 4/5 indication above the 15 minutes mark inside the 30-minutes counter at 9 o’clock to allow the wearer to record up to 45 minutes.