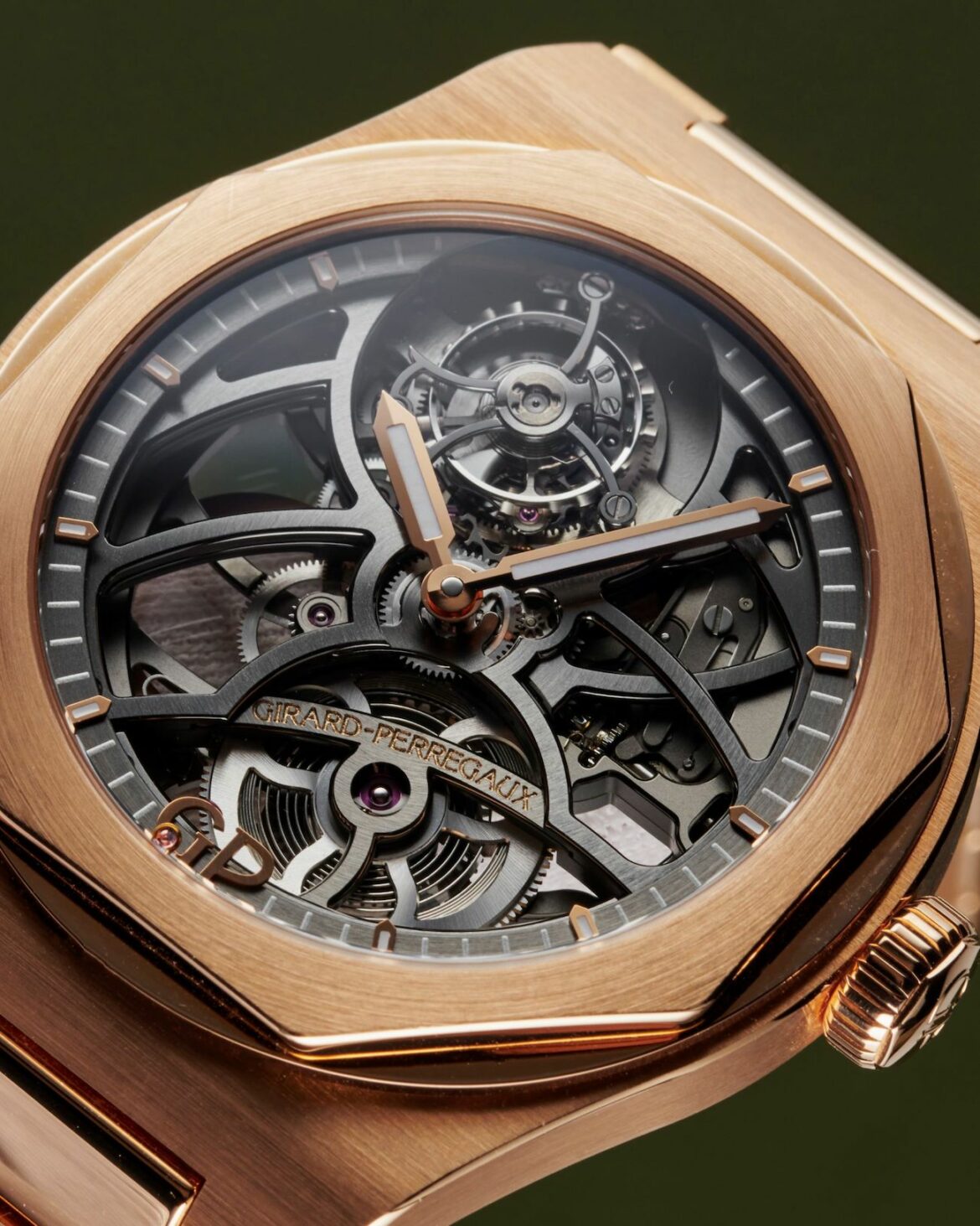 Zurich-based auction house Ineichen Auctioneers will offer an enticing series of auctions featuring complicated watches during the final quarter of 2022.

First up is an auction on October 29 that features more than thirty watches and will showcase tourbillons and open-worked (skeletonizied) watches. Part two of the series, slated for December 3, will focus on watches with chronograph and date functions.

“Despite their mechanical complexity, I think tourbillon watches and skeletonized pieces are the most visually pleasing. This auction is purely about joy-inducing aesthetics for me,” says Ineichen Auctioneers CEO Artemy Lechbinsky.

Here’s a peek at a few of the top lots for the October 29 auction. 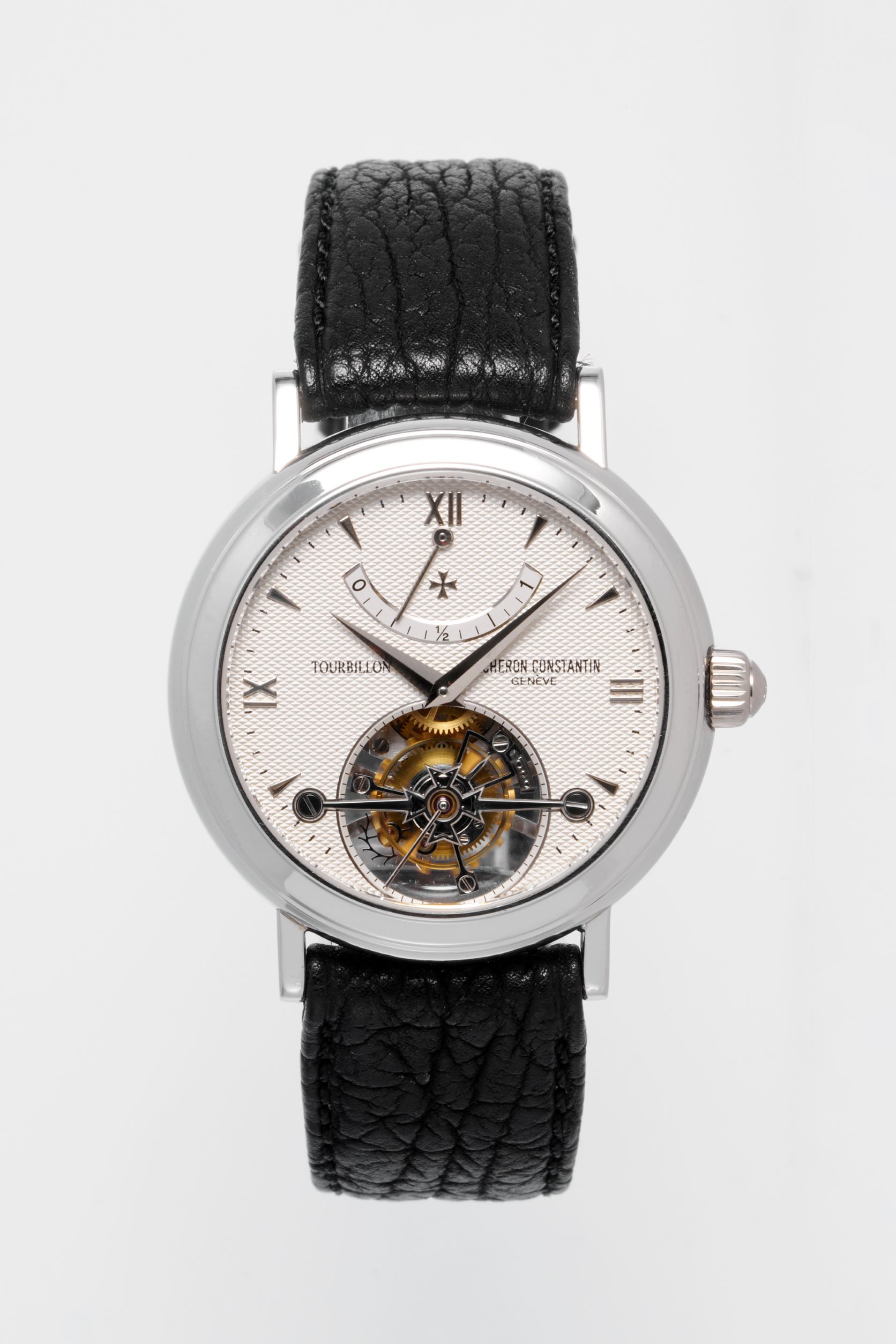 This early and rare tourbillon (dated 1990-2000) from Vacheron Constantin is cased in platinum 950 with a diameter of 38mm, a thickness of 11.5mm and a sapphire caseback. 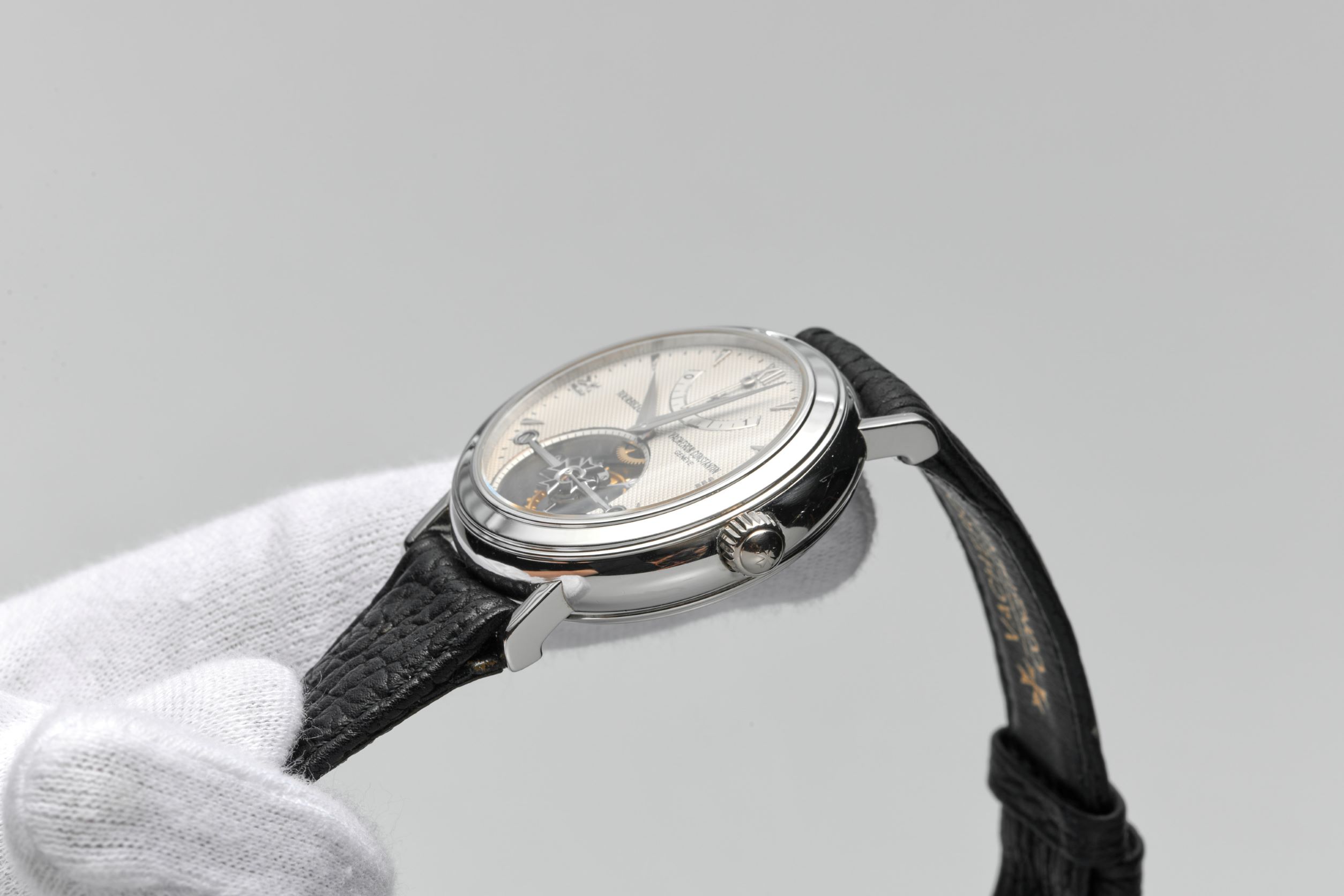 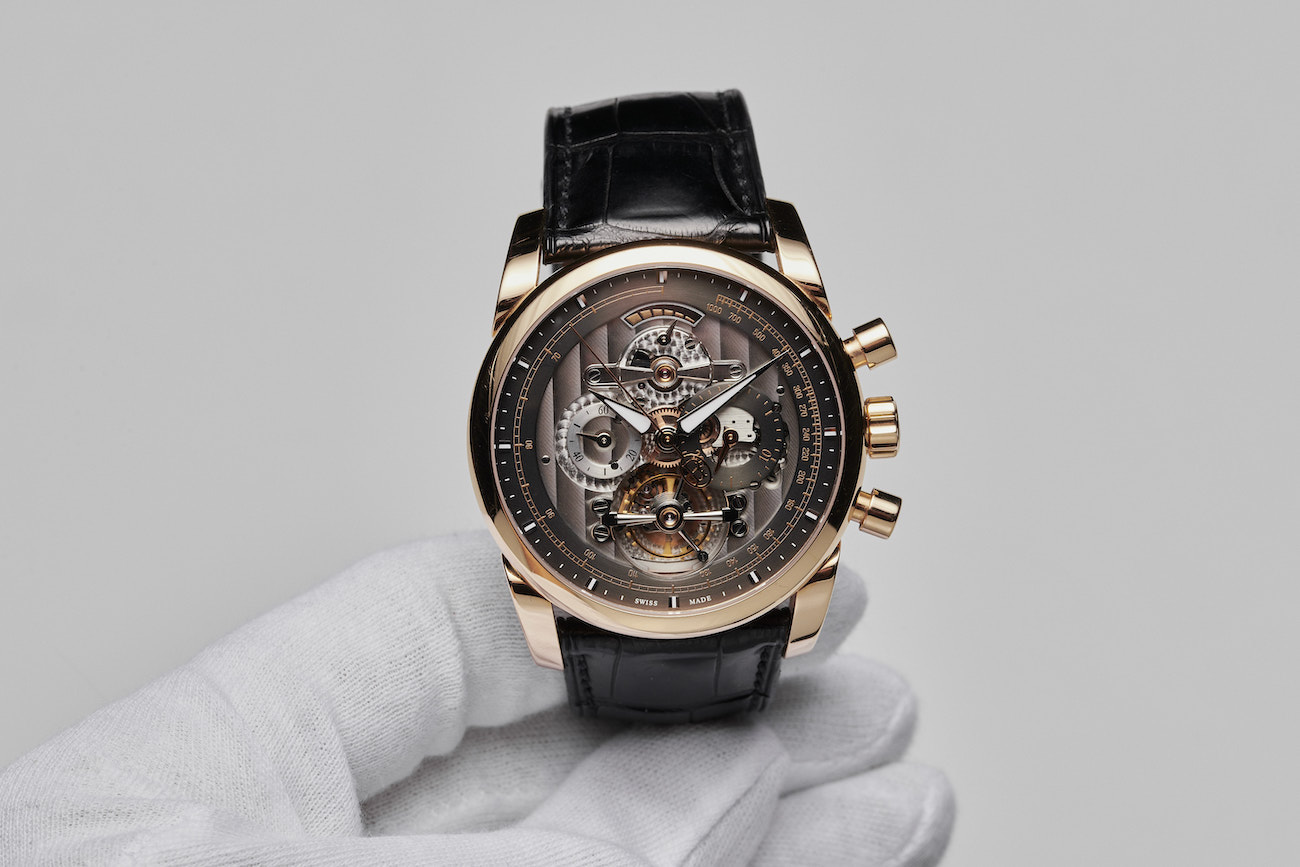 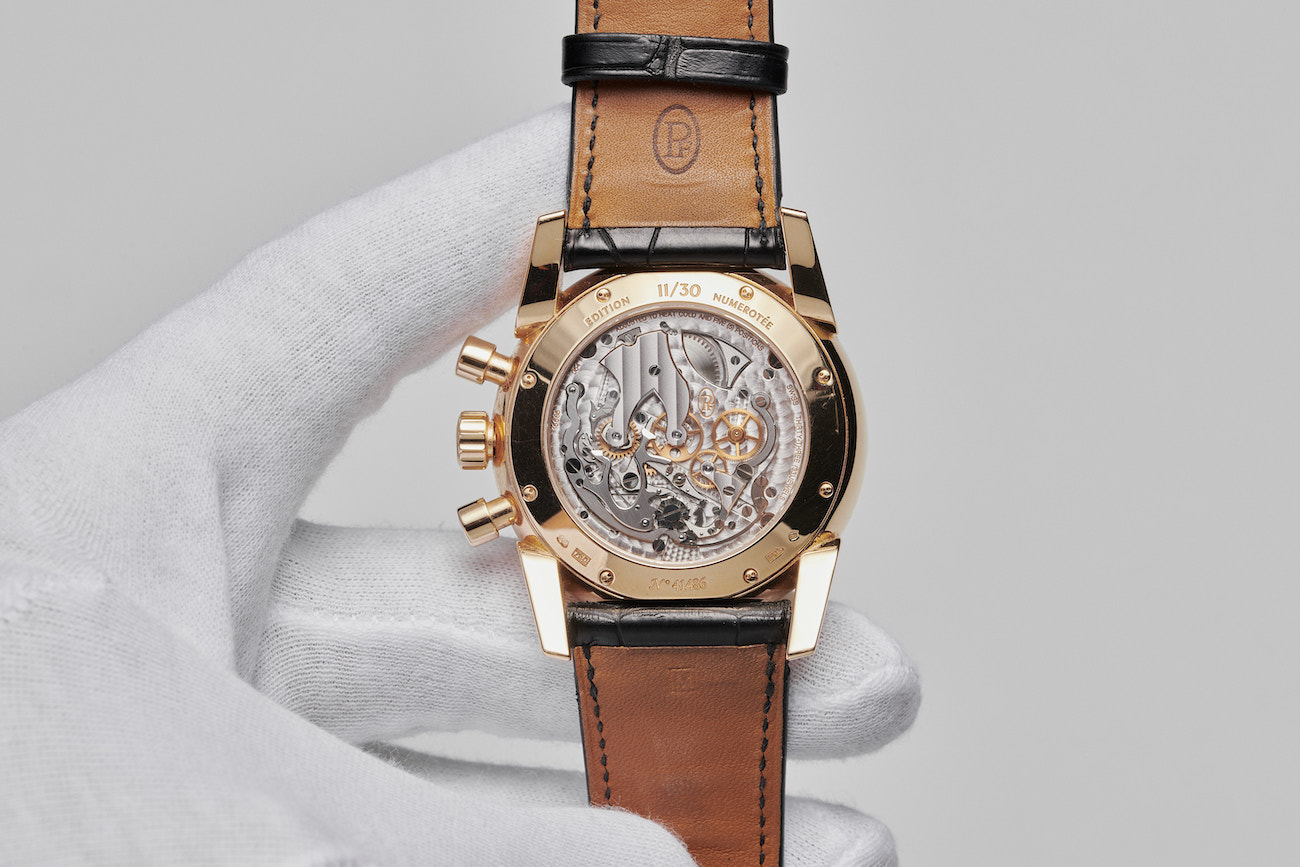 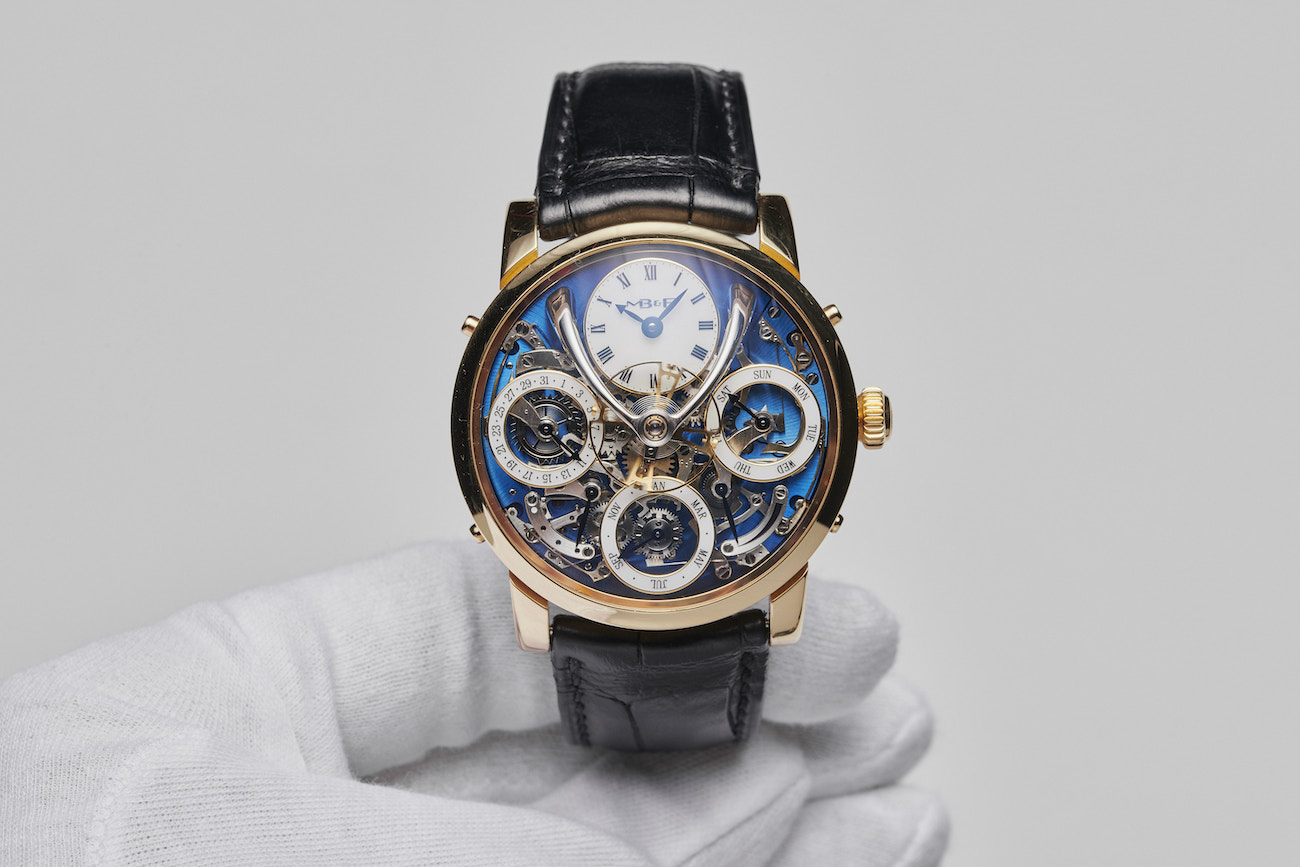 The complexity of this fully integrated perpetual calendar developed by MB&F and Stephen McDonnell limits the production. The 581-component in-house movement was developed to eliminate the drawbacks of conventional perpetual calendars. It is designed to be user-friendly, ensuring that dates are not skipped or gears jammed. Adjuster pushers automatically deactivate when the calendar changes. 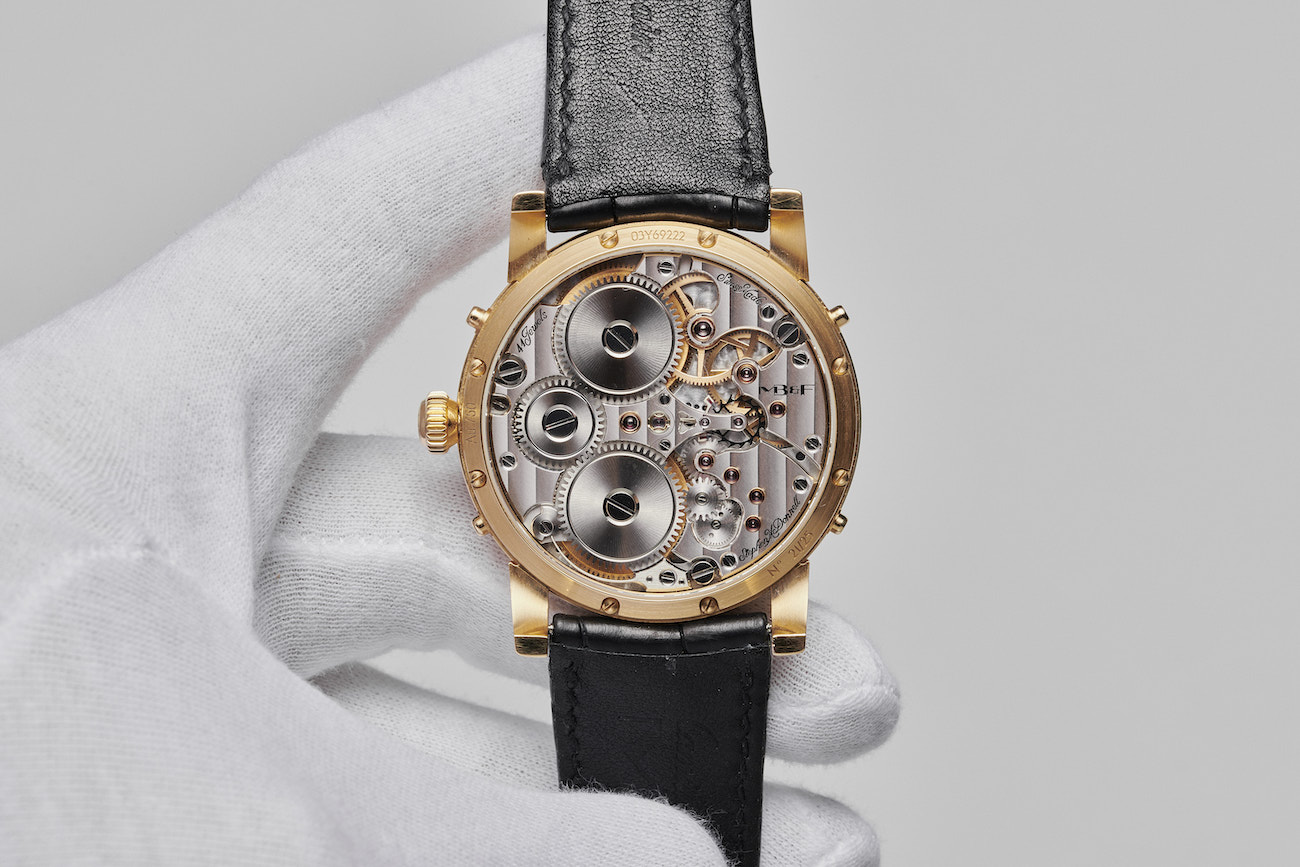 This watch forms part of a collection limited to twenty-five pieces that was launched in 2020. It is presented in a yellow gold case, which contrasts beautifully with the blue detail on the dial. High-end hand finishes that respect the 19th-century style can be admired throughout. The watch is fastened with a black leather strap with 18-karat yellow and white gold MB&F triple folding clasp produced by G&F Chatelain. 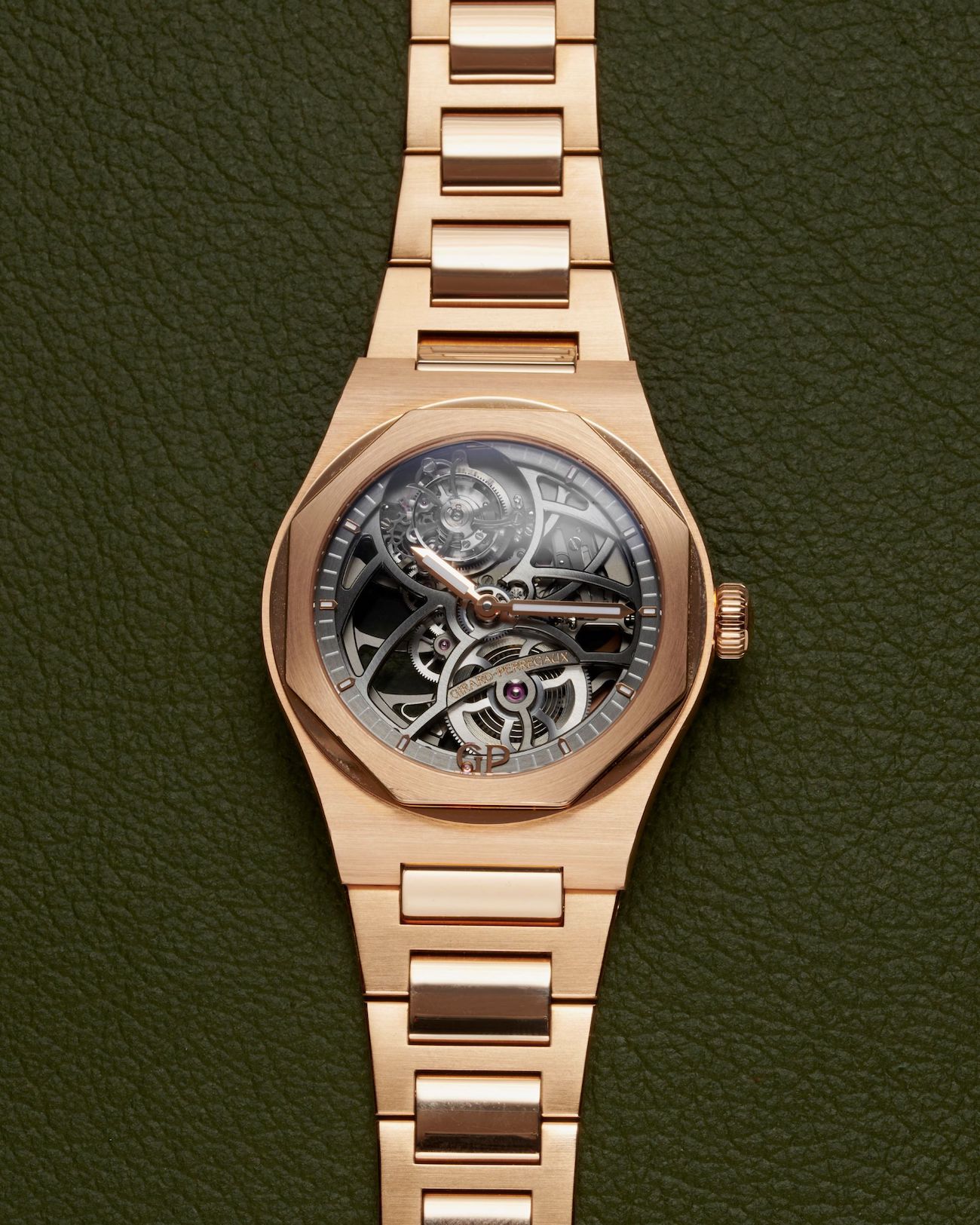 The numbered edition 42mm Laureato Flying Tourbillon Skeleton, first introduced in 2017, is produced exclusively in 18-karat gold. It is arguably one of the finest complicated luxury sports watches presented on an integrated bracelet. 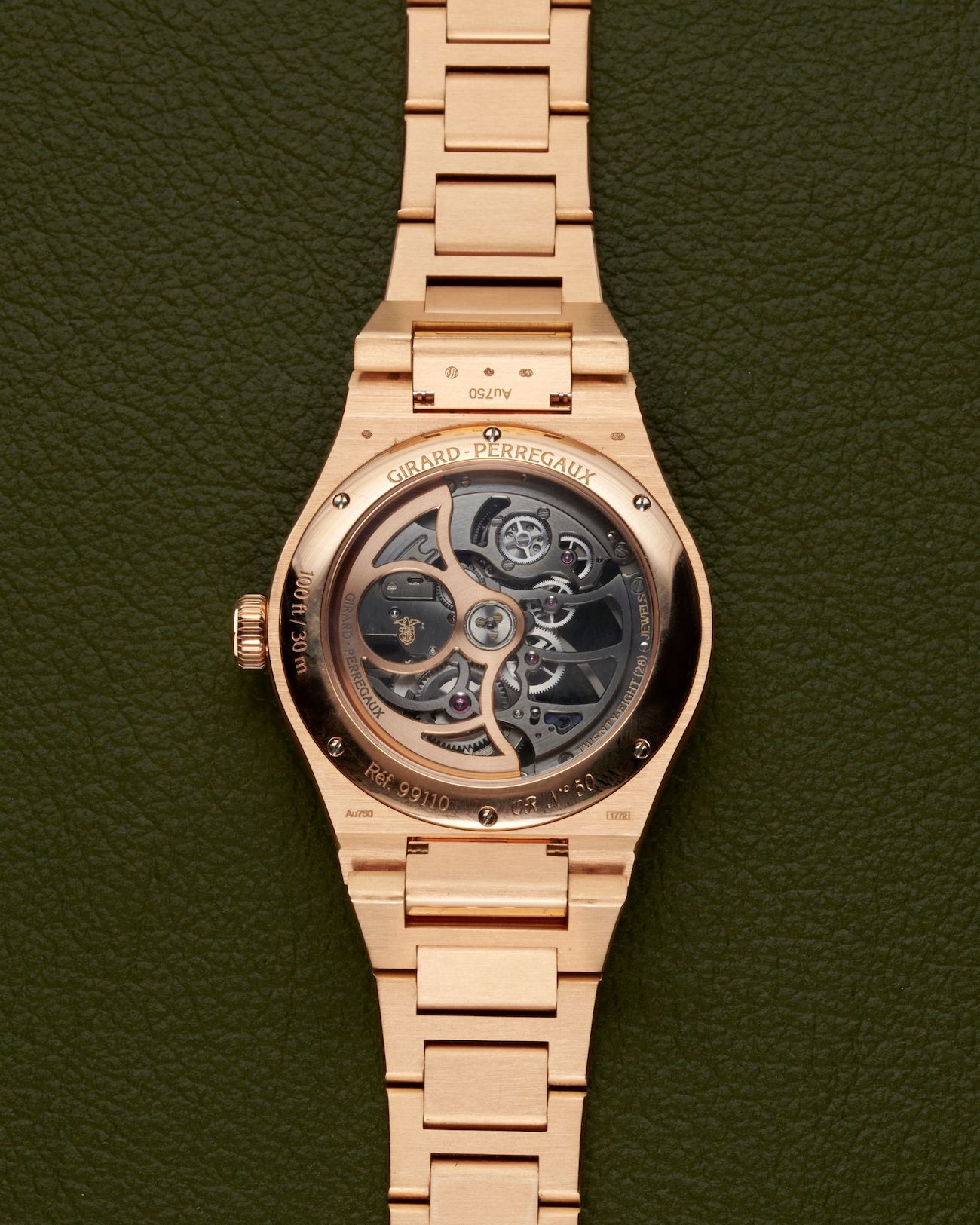 Caliber GP09520-0001, which powers this model, is an extremely rare movement for Girard-Perregaux. It is equipped with a flying tourbillon, devoid of a bridge on the dial side, and features a proprietary design normally with three gold bridges. The GP09520-0001 is produced exclusively in the skeletonized version and was the brand’s first self-winding flying tourbillon movement. Estimate: CHF 60,000 to 80,000. 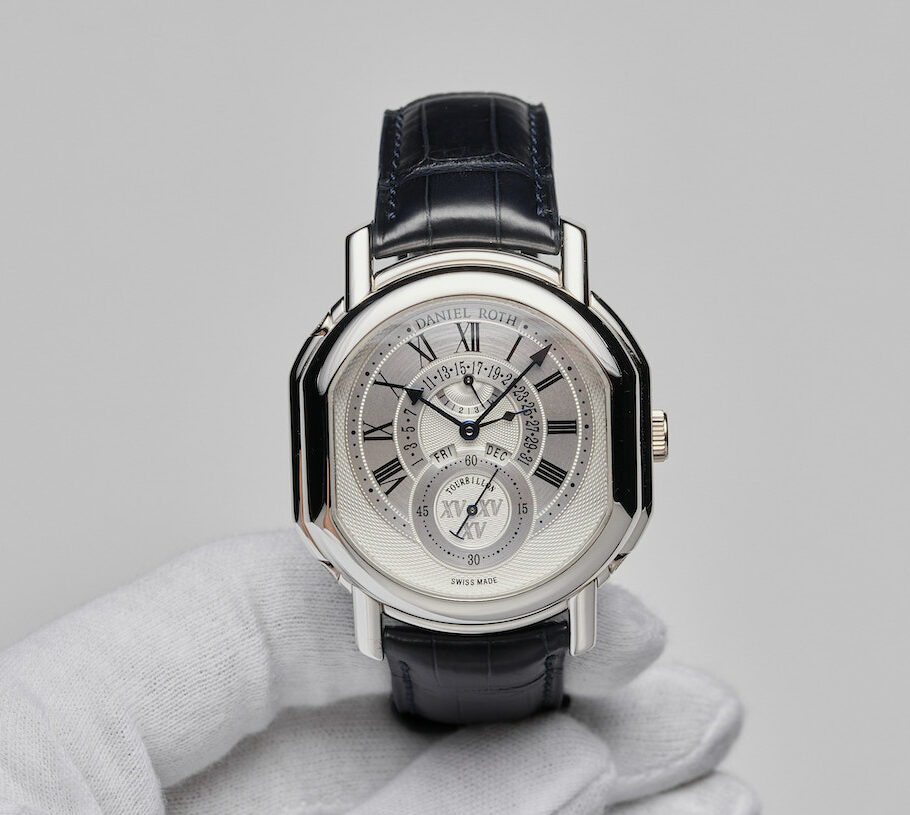 This watch showcases a rare combination of complications: a perpetual calendar with two retrograde indicators (date and leap year), tourbillon and automatic winding functionality, which are powered by the DR740 caliber. All Ref. 199 sub-references were produced in very limited quantities and precious metals including platinum as seen in the current lot. It was launched in 2004 as a jubilee limited edition to commemorate the brand’s 15th anniversary. 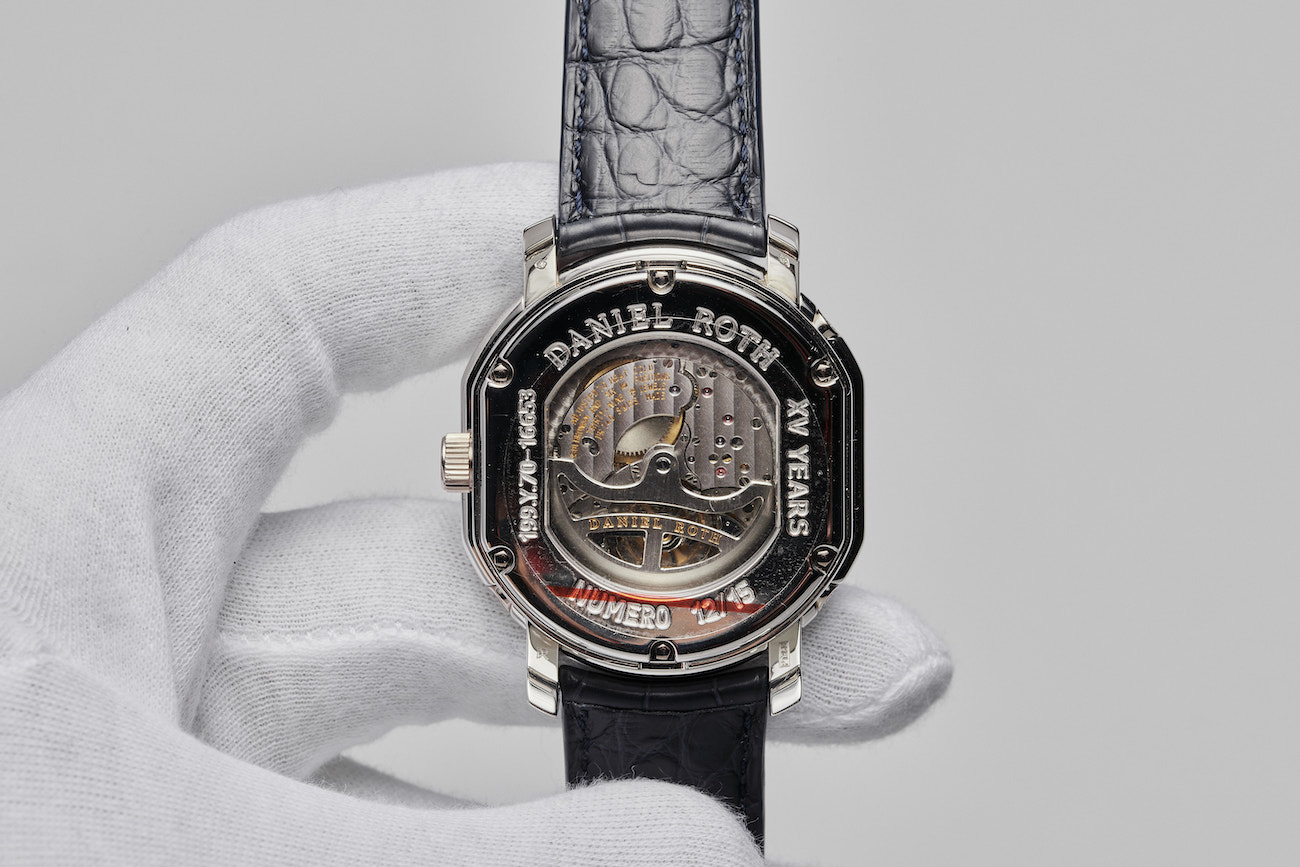 This piece is one of the first generation (Mk1) releases of the Ref. 199 design. It features a solid dial as well as a guilloché small seconds subdial with three “XV” embossed inscriptions woven into the pattern. Such decoration is atypical of the Daniel Roth style. The presence of a tourbillon is indicated only by the inscription “Tourbillon” on the subdial because it is only visible through the sapphire caseback. There is also an engraved inscription “XV years” on the rim of the caseback. Estimate: CHF 30,000 to 40,000. 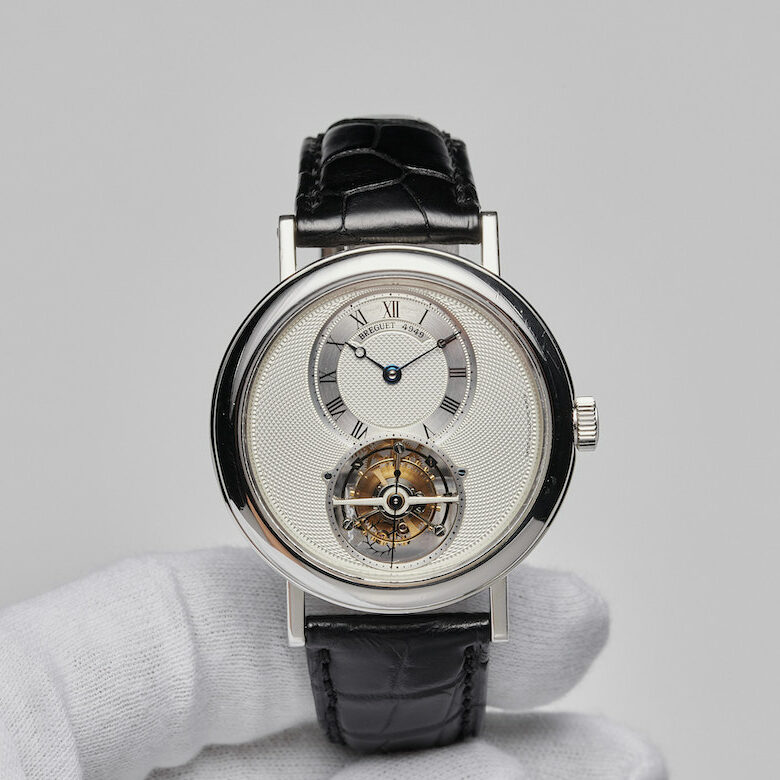 This rare and fine platinum tourbillon wristwatch was most probably produced in 2012. Case made of platinum 950, it measures 39mm by 8.9mm, with a signed crown, sapphire caseback, 18k gold silver-plated dial with hand-made guilloché decoration, recessed hours and minutes sub-dial, Breguet double secret signature between XI and XII and XII and I. The hand-wound caliber 558.1 is hand-engraved with Breguet hairspring. Functions – hours, minutes, tourbillon, small seconds hand on the tourbillon shaft. Black leather strap with Breguet platinum 950 double folding clasp. 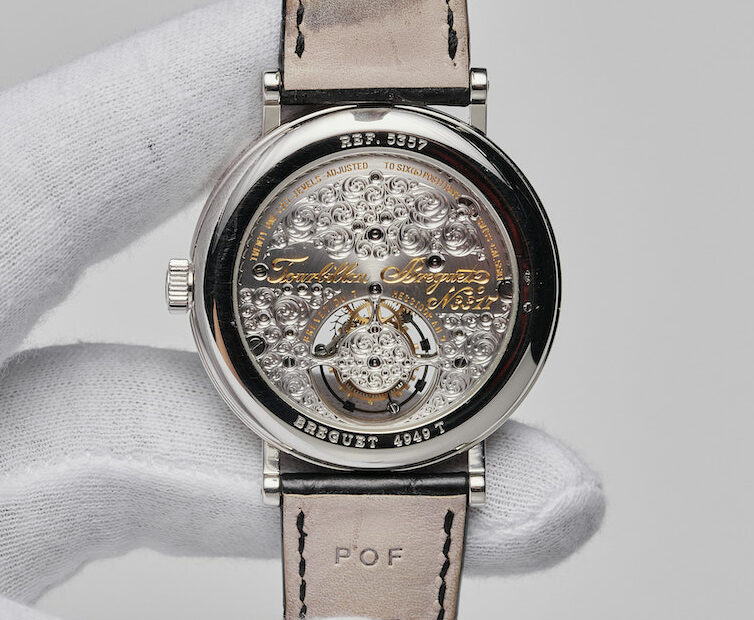 This Classique Grande Complication Tourbillon Ref. 5357 was introduced in 2002 as a larger 39mm alternative to the original 35mm Tourbillon Ref. 3357 (initially 3350). Unlike reference 3357, Ref. 5357 featured a new single-layer solid-gold and silvered dial, decorated by hand-made guilloché pattern, with a recessed hours and minutes sub-dial and a round tourbillon aperture, but the same original Breguet’s hand-wound tourbillon caliber 558 (version 558.1).

The reverse side of the movement deserves special attention – it is exquisitely and lavishly engraved by hand, and, moreover, there exists at least five basic engraving generations. The engraving of caliber 558 is done by hand and although it follows one of the 5 basic designs, the engraving is different each time in small details, and therefore any watch is essentially a unique piece. Estimate: CHF 30,000 – 40,000.