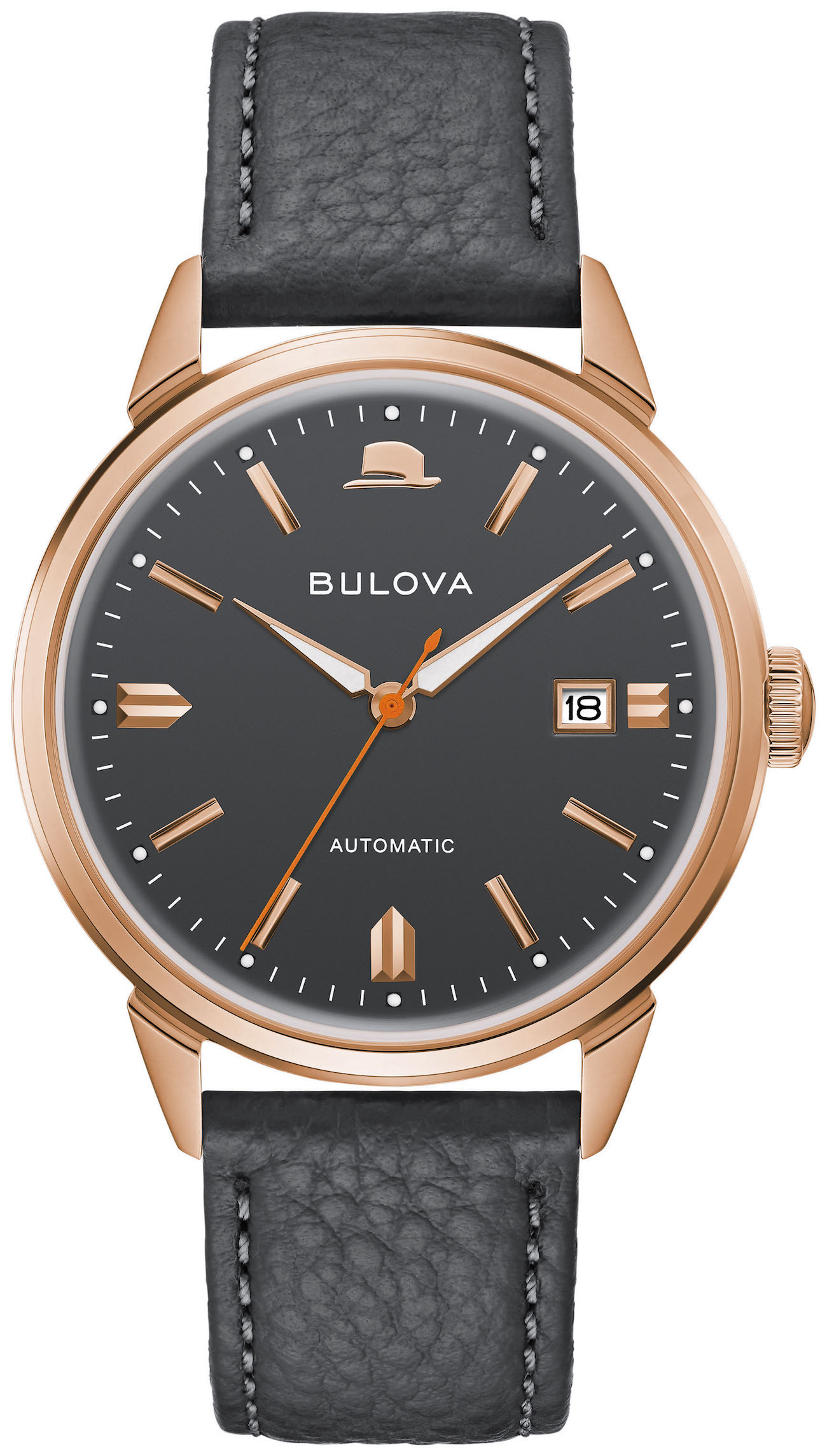 Most notably, Bulova places a fedora, the Frank Sinatra collection’s trademark, in relief at the top of the dial. The orange seconds hand and orange hour markers (on the steel-cased model) are an ode to Sinatra’s favorite color. 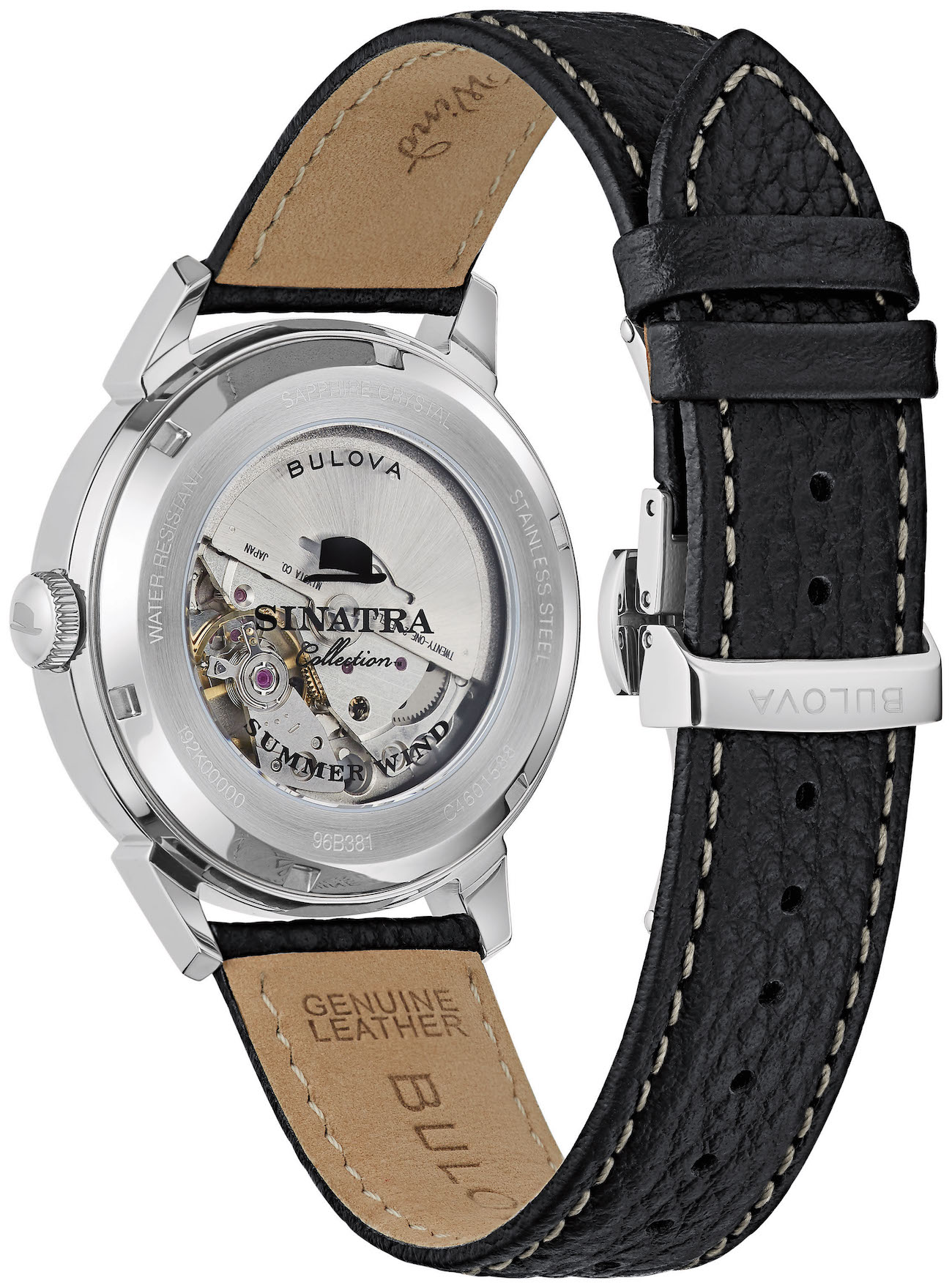 Inside Bulova fits an 8215 Miyota Automatic 3H Calendar movement, visible through an exhibition caseback. Bulova packages each watch in packaging inspired by a vinyl album box set with lyrics from five Sinatra songs. 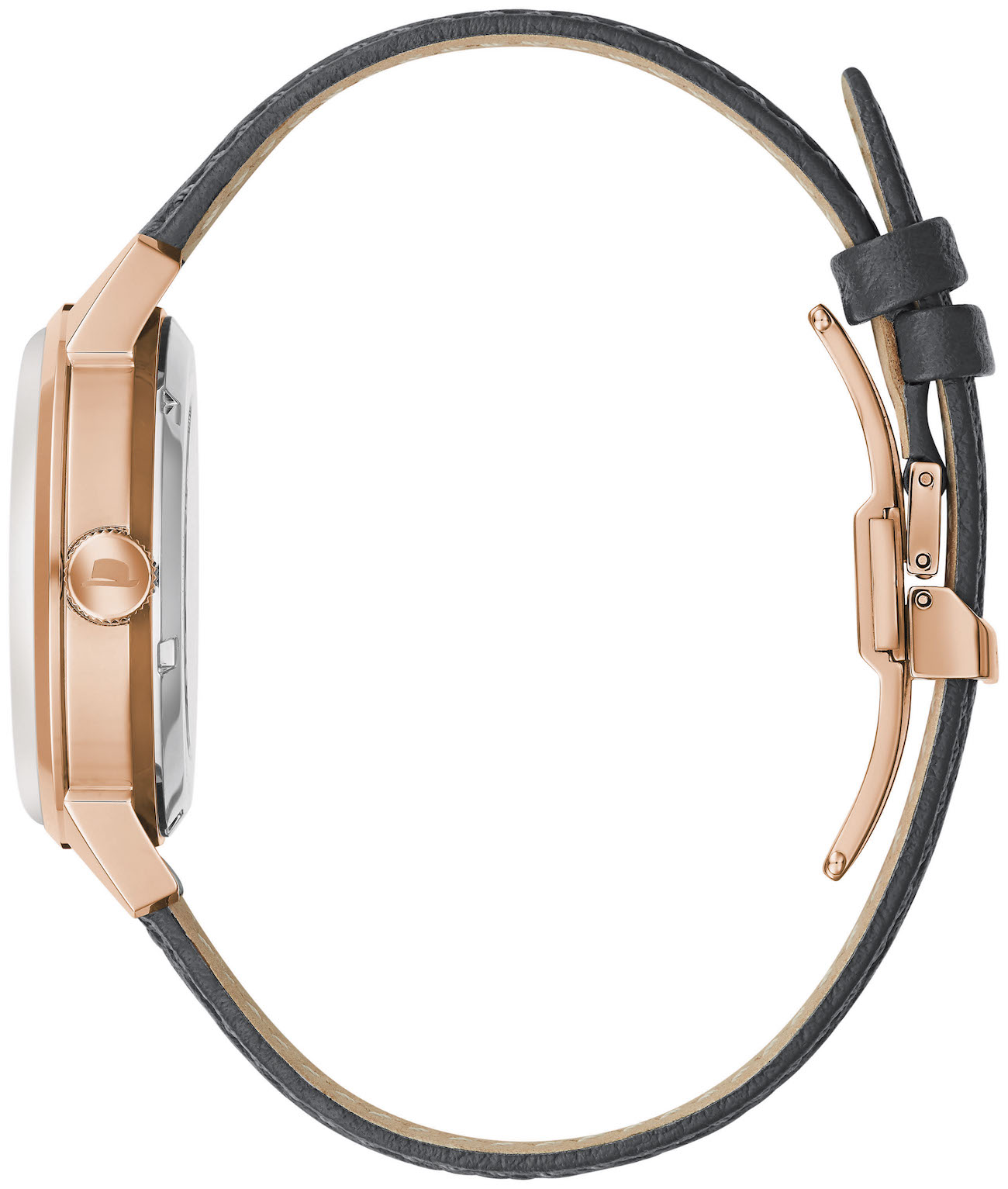 Bulova’s Frank Sinatra collection features a series of watches named after songs made famous by the singer. It underscores the relationship between the singer and Bulova that started in the 1950s with the Frank Sinatra Show television program, also known as Bulova Watch Time, which the Bulova sponsored.

“We are proud to carry on our relationship with Frank Sinatra, including at the Frank Sinatra School of the Arts, which happens to be a New York school,” says Michael Benavente, U.S. Managing Director of Bulova. “Bulova has made a longstanding commitment to the support of music through various partnerships that help spotlight and encourage young musical talent to discover American music heritage and culture.”

The famed late singer is the star of a new series of ten Bulova watches named after well-known Frank Sinatra songs. The brand’s new Frank Sinatra Collection is dedicated to Sinatra – who was known for wearing Bulova watches – and features watches with cases and dials inspired by designs from the 1950s and 1960s.

Bulova’s connection to Frank Sinatra began in the 1950s during The Frank Sinatra Show television program for which the brand was the sponsor.

A pioneering advertiser known for extensive early radio and television campaigns, Bulova has in recent years renewed its connection to the music industry with partnerships with the Recording Academy, the Latin Recording Academy as well as through initiatives like Tune of Time or with non-profit partner, Windows of Hip Hop. Bulova has also teamed with the GRAMMY Awards to create a series of watches. Frank Sinatra took home nine GRAMMY awards during his long career.

“Our commitment to music includes many talents, many genres, many voices. Who better than ‘The Voice’ himself, Frank Sinatra, to continue to showcase our dedication and appreciation for the art of music and its ability to transcend time,” says Jeffrey Cohen, President of Citizen Watch America, which includes Bulova within its corporate umbrella.

“No one respected time more than my father, he never liked to keep an audience waiting, adds Frank Sinatra’s daughter Tina Sinatra. “He often said, ‘If you’re not early, you’re late.’ Dad’s association with Bulova spans over six decades and we are proud to continue the relationship into the 21st Century.”

The new Bulova Frank Sinatra Collection includes manual-wind, automatic or quartz timepieces made in a square, rectangular, round and tonneau case shapes and named for some of the best-known Sinatra songs, including “My Way,” “The Best is Yet to Come” and “Fly Me to the Moon.”

The watches are cased in either stainless steel or gold-toned steel and are powered by a Sellita or Miyota automatic or manual-wind caliber, or by a Miyota quartz caliber. Many feature gold-toned hands and indexes and are offered in steel or leather straps. Prices range from $495 to $1,350.

In addition, Bulova pays tribute to Sinatra by placing an image of the singer’s Fedora hat on the crown and by imprinting song titles on the inside of the straps and on the caseback of each watch. Frank Sinatra’s signature is also seen on each dial.

My Way is a tank-style stainless steel or gold-tone steel watch with a silvery white or black dial and a Miyota quartz movement. Prices: $495 and $525.

The Best is Yet To Come is an assortment of 40mm round case watches in either stainless steel or gold-toned steel with an exhibition caseback showcasing a manual-wind Sellita SW215 movement. Prices: $1,150 to $1,350.

Three pieces under the name Fly Me To The Moon feature 39mm round steel or gold-tone steel cases and powered by a Miyota Caliber 8215 automatic movement seen through an exhibition caseback. Prices: $750 to $825.

The Young At Heart includes a selection of timepieces in a gold-tone stainless steel tonneau-shaped case. One of the novelties is presented with a brown sunray brush dial inspired by Sinatra’s Whiskey partnership complete with a brown calf strap.

The other is seen with a silver white sunray dial with a black calf strap. A Miyota Caliber 8215 automatic movement powers both pieces. Price: $695.

Bulova will sell each watch with a package that mimics a vinyl album box set. It will also include lyrics from Sinatra songs and incorporate various vintage images. 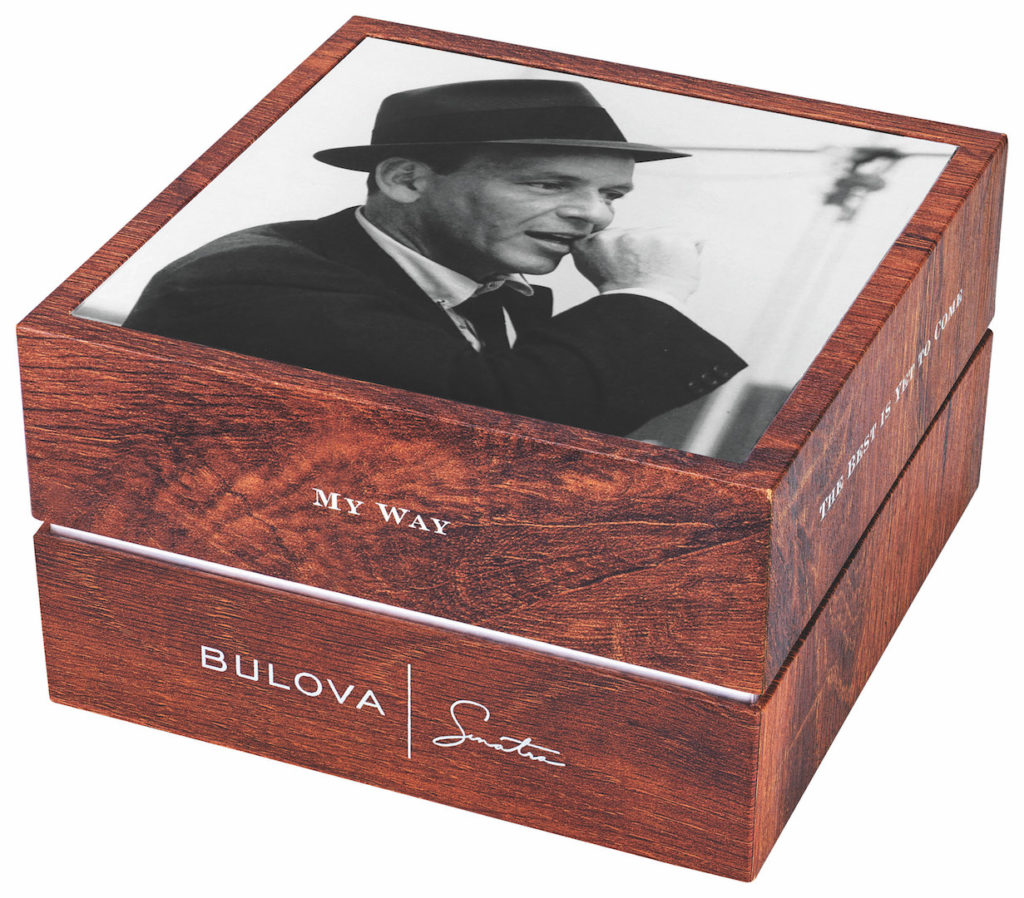 The Frank Sinatra collection will be available later this year on Bulova.com and at other Bulova official retailers. 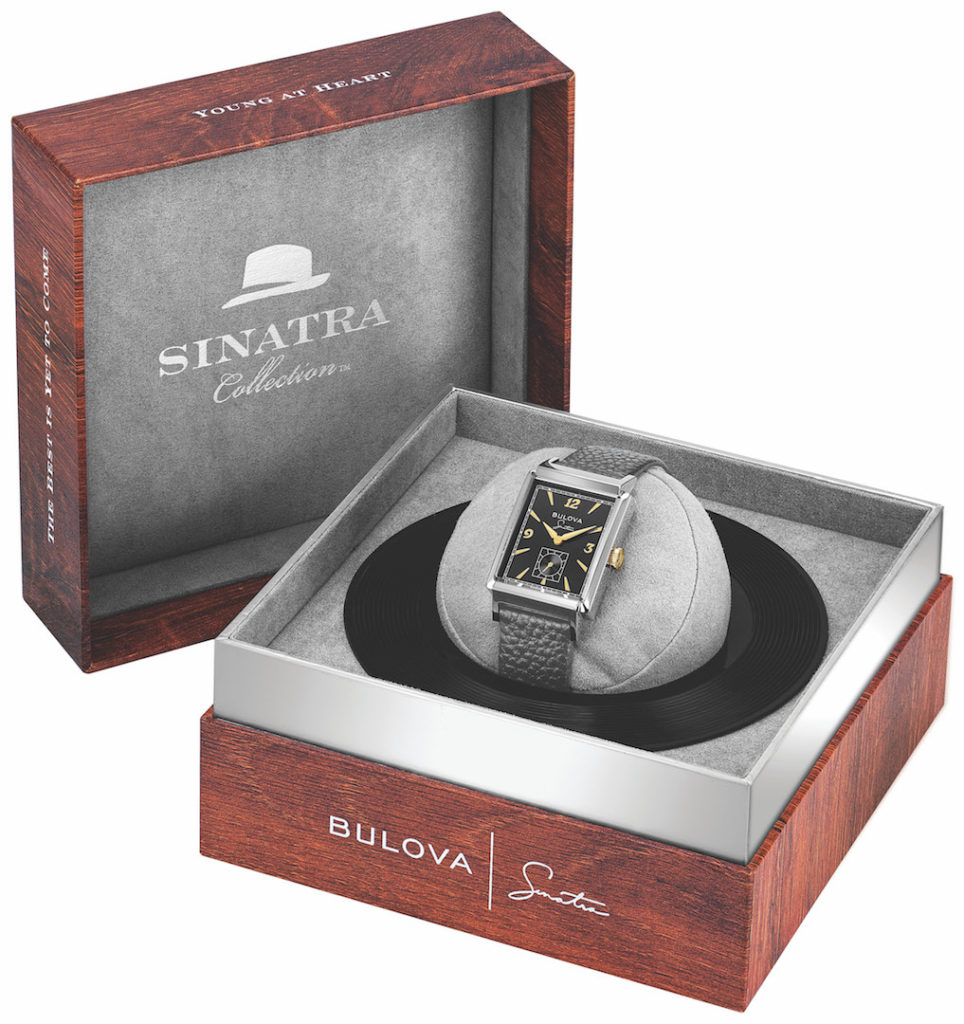