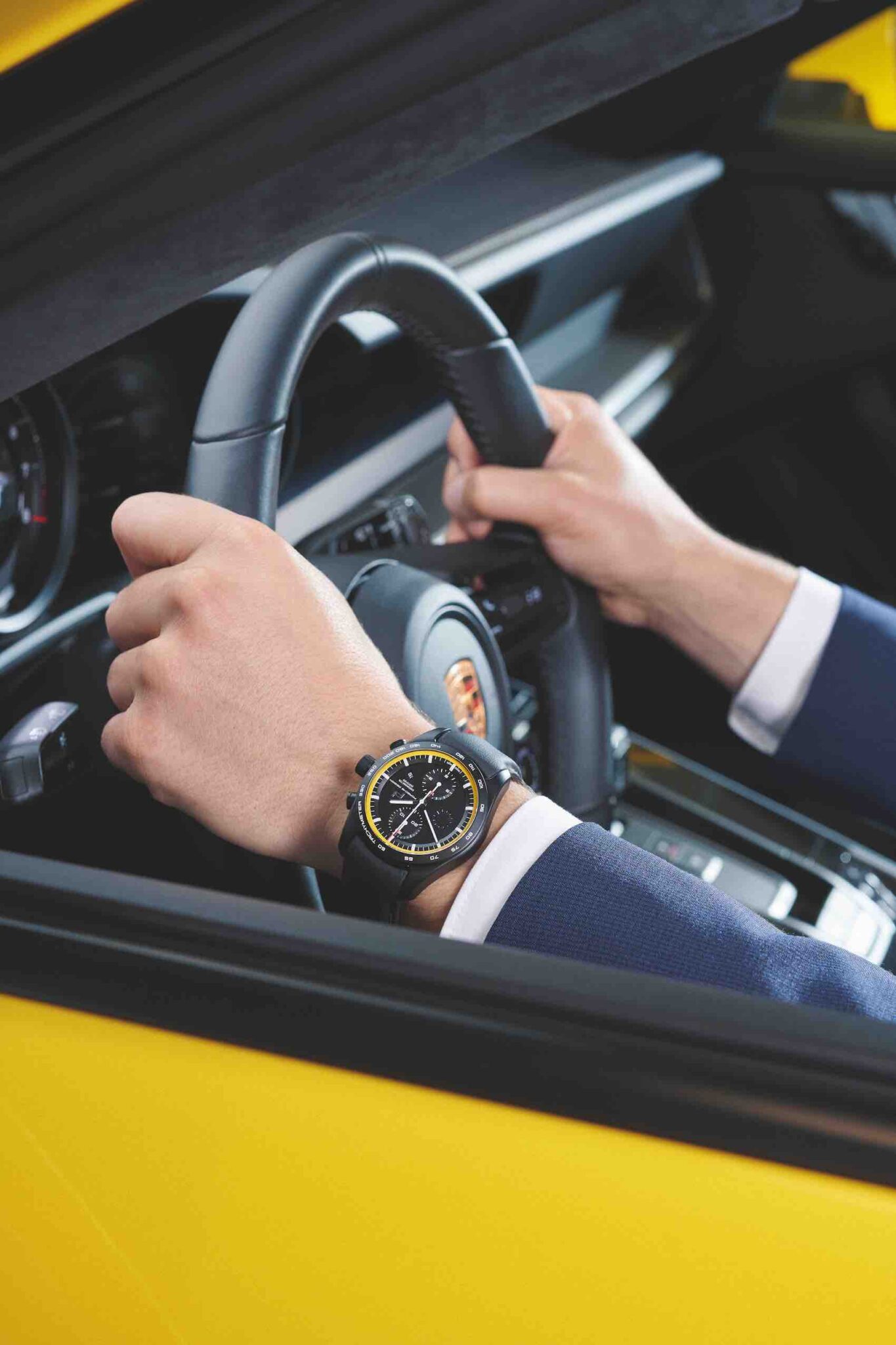 A Porsche on Your Wrist

Porsche Design applies the principles behind the Porsche car configurator to its wristwatches.

Few topics rev up collectors as much as watches and automobiles. Porsche Design has known this ever since Ferdinand Alexander Porsche designed the first Porsche Chronograph 1 in 1972. It was the first-ever all-matte-black watch, and it set the stage for five decades of cutting-edge wristwatch creativity from his then-new studio, Porsche Design.

This year, Porsche Design has launched a program meant to inspire budding F. A. Porsches who, like Professor Porsche, want to design and wear a wristwatch inspired by –and infused with – Porsche’s automotive legacy.

Watch collectors and Porsche owners can now create a customized Porsche Design chronograph that perfectly matches the Porsche 992 or Porsche 911 of their dreams – or the one in their garage.

Porsche Design released the streamlined online configurator this September after six years of development. The process itself echoes the customization process that Porsche has offered buyers of its famed 911 for years, but expands the type and breadth of options from which a buyer can choose when creating a dream chronograph.

For more than thirty years, Porsche customers have been able to enhance their personal dream car with many individual details through Porsche Exclusive Manufaktur, even to the point of designing a one-off vehicle.

This experience has now been expanded with the ability to design a Porsche Design chronograph based on an individual’s personal taste or Porsche 992 vehicle configurations. It’s an experience that ultimately ends with the customer taking ownership of a Porsche they designed themselves.

“As with the online car-design process, the watch is digitally visualized down to the smallest details and customizations are shown to the customer in real time. The customer begins by selecting the case of the watch and then continues choosing from more than 1.5 million configuration possibilities,” explains Gerhard J. Novak, General Manager Timepieces, Porsche Design Group.

“Once the customer has finished designing the chronograph, an individualized configuration code is created, and from there it is sent, or brought in, to any authorized U.S. Porsche dealer where the order is placed. Delivery takes between eight to twelve weeks.”

The rendering of the watch is based on CAD data from the designers at Studio F. A. Porsche in Zell am See, Austria, and the Porsche Design engineers in Solothurn, Switzerland.

“It quickly became clear that these custom components had to be interchangeable without the need to develop a new watch each time,” explains Rolf Bergmann, Managing Director, Porsche Design Timepieces AG. “Offering a wide range of options while manufacturing small quantities of custom-built timepieces is possible thanks to the sequential production process transferred from Porsche sports car production. The principle of zero-defect tolerance was a necessary prerequisite for the implementation of a watch concept like this.”

Key among the components of the customer-designed watch is an entirely new engine.

Porsche Design developed a new movement to serve as the engine for the online-designed timepiece. The new Caliber WERK 01.100 is a COSC- certified chronograph movement that now enters serial production for the program.

But the WERK 01.100 offers Porsche Design customers more than simply its novelty.

“For the first time customers can individualize a part of a Porsche Design COSC-certified movement by choosing the winding rotor that features the various wheel designs of the latest-generation Porsche 911,” Bergmann says. “The color on the rotor edge can also be customized to match the color on the outer edge of the wheels of the 992,” he adds.

Customers select their choice of rotor design after choosing which case to place it into. Porsche Design offers a 42mm case based on the one it used in Chronotimer Series 1. The user can opt for a glass-bead blasted natural titanium or a black titanium case coated in titanium carbide via a PVD-process.

Next, the customer chooses his or her strap.

Bands can be titanium or leather and are offered in three sizes with up to 300 different configurations. All leather straps (with butterfly clasp) are crafted from the same hides Porsche uses for its car interiors and come in the fourteen official interior colors of the current Porsche 911 series. Leather wristband stitching is offered in the nineteen different colors of genuine Porsche yarn. 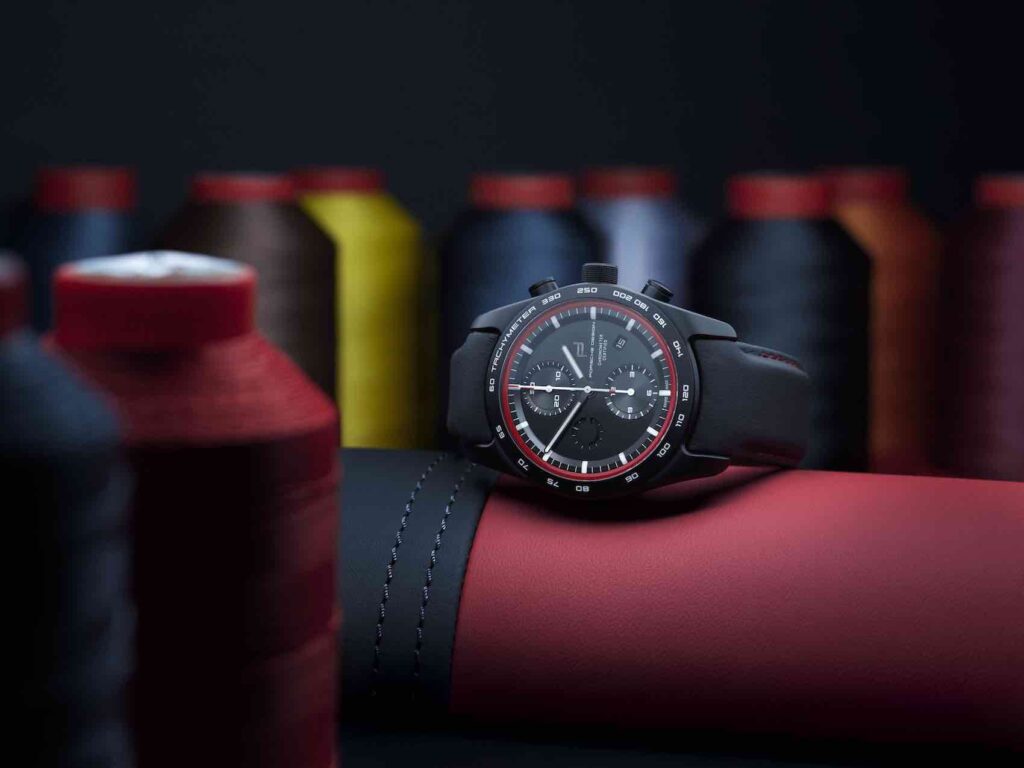 Porsche Design has created dial options for the program that start with the matte black look of the current Chronotimer Series 1, with its minutes counter at the top of the dial, hour counter at the 6 o’clock position and running seconds at 9 o’clock.

But the user can add color using one of many colorful inlaid ring options, with colors based on those used on the current Porsche 911, to frame  the black dial to either complement or contrast the choice of strap.

More dramatically, the watch collector then opts for either a brushed bezel or a black tachymeter bezel set with minute markers in the style of the design-defining classic speedometer developed by F. A. Porsche.

Each custom-built timepiece can be further individualized with a laser engraving on the back of the case as well as on the exclusive watch box, according to Bergmann.

“If desired, the corresponding car visuals, a graphic logo or the fonts and lettering featured on the rear of the customer’s car can also be applied to the watch box,” he adds.

While watch collectors have long heard about buying “a racecar for the wrist,” from makers of auto-influenced watches, Porsche Design is confident that its new online configurator comes closest to the truth of that metaphor.

“Customers who order their own custom-built Porsche Design chronograph will take a piece of the Porsche sports car lifestyle with them when not behind the wheel,” notes Novak.

The direct relationship between the watch and the car is undeniable, he adds. 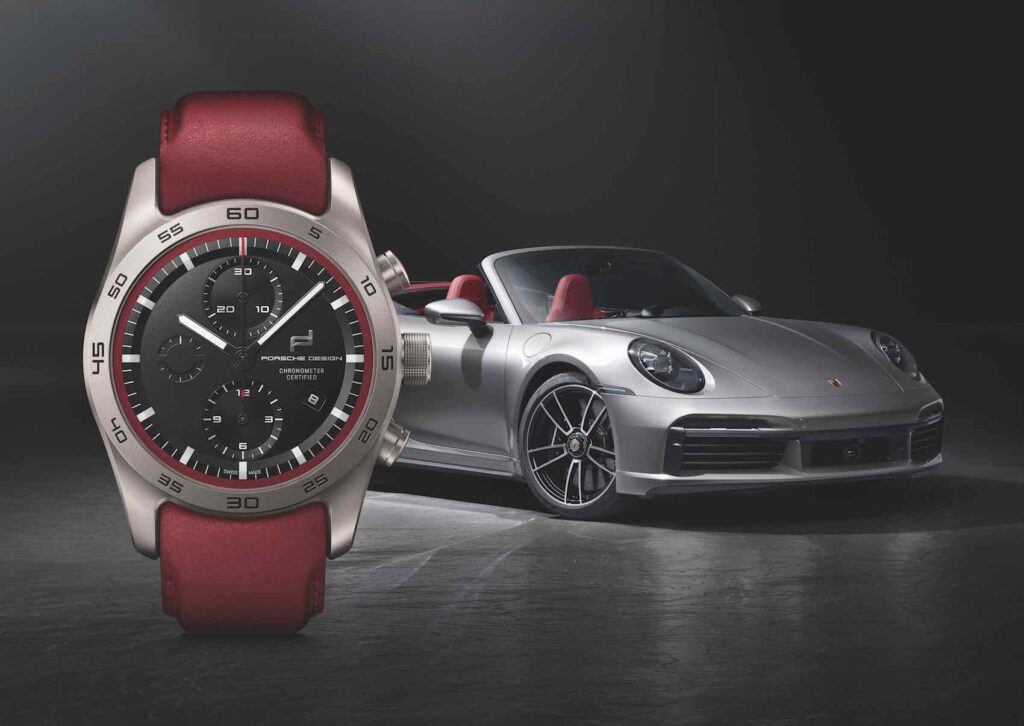 “The experience of designing a Porsche Design masterpiece based on the current 992 generation is one-of-a-kind – from the rotor and bezel to the genuine Porsche leather straps,” he adds. The program will be expanded to include additional Porsche models in the near future.

The six-year project required a deep restructuring of Porsche Design watchmaking and development, he explains.

“The greatest challenges certainly were in regards to the order and production processes; after all, this had never been done before. The idea of a “sports car on the wrist” was different for every customer, and it required us to rethink our entire process. Everything from engineering, sourcing and production had to be adjusted. To do so we tapped into the brand’s heritage and pulled key learnings from Porsche’s unique automotive production expertise.” 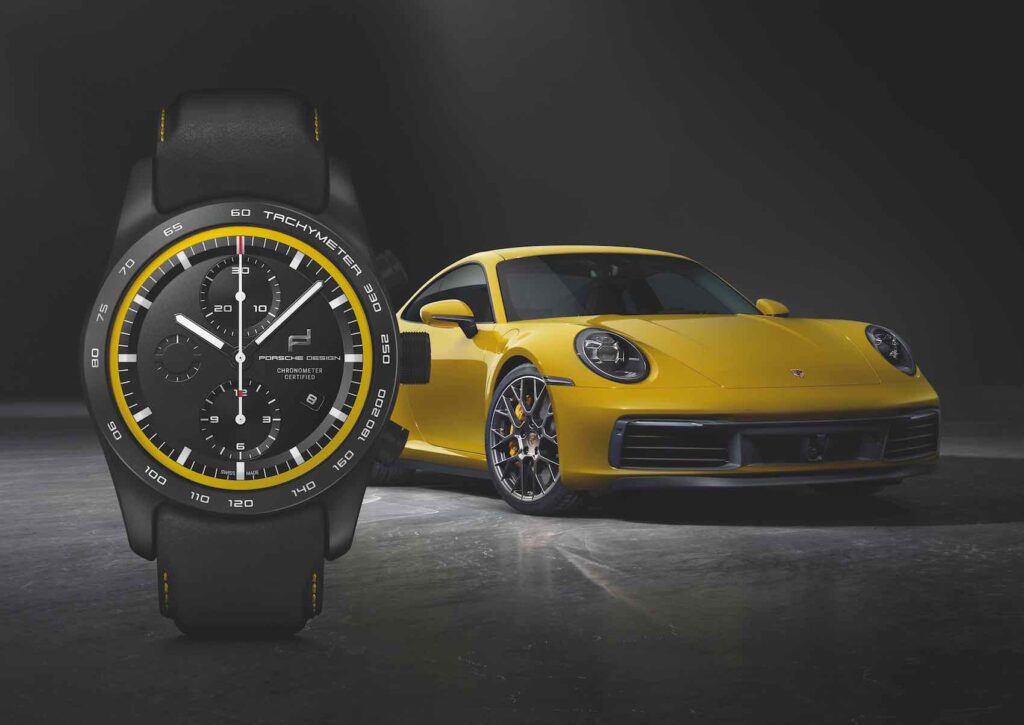 Thus far, with only a few months of processing orders, Porsche Design says reactions to the program have been very positive.

“The very first order we received after the program launched in the United States was actually from a Canadian customer,” Novak reports. “He had heard about the custom-built timepieces program and reached out to see if he could design a watch to match his 992 and place an order in the U.S. He will actually be picking up his “sports car for the wrist” at an East Coast dealership in the coming days.”

“We are looking forward to continuing to introduce the program to new Porsche Design and Porsche customers alike,” says Novak.

Indeed, customization has been a buzzword among high-end watchmaking for the past few years, and several watchmakers have embraced the possibilities of made-to-order watches, mostly with very limited color or material options.

Novak points out that as Porsche itself has enjoyed a positive customer experience with personalized automobiles, Porsche Design’s careful development of the process with timepieces makes perfect sense. “Introducing this unprecedented level of personalization in the luxury watch segment was a natural next step for us,” he says.

“The timepieces business unit is extremely important for Porsche Design globally and in the United States, and we believe we are keeping pace with the general desire for more individualization in watches.”

For Porsche, that customization perfectly unites its automotive realm with the burgeoning watch division of Porsche Design, as supported by its German engineering and Swiss manufacturing facilities.

“Not only does the program highlight the connection between Porsche sports cars and Porsche Design timepieces,” says Novak, “it embodies the premium aesthetic, attention to detail and optimal performance expected of all things associated with the name Porsche.”

Porsche Design Custom-built timepieces are priced starting at $5,150 and, depending on the selections made, can range up to $11,600.