Zenith invites collectors and enthusiasts to stop by its “Master of Chronographs” exhibition and workshop on June 15 through June 17 to learn all about the Zenith El Primero direct from Zenith’s own experts.

Visitors can expect a slate of chrono-centric activities starting at 10 a.m. each day of the event, which takes place at  Phillips Auction House,  432 Park Avenue at (at 56 Street), New York, NY 10022.

In the 30-40-minute hands-on clinic a master watchmaker will discuss the inner intricacies of the chronograph complication, with focus in the El Primero movement.

Zenith’s Product Development and Heritage Director Romain Marietta will guide guests through a series of historically significant archival timepieces. These rare timepieces, the legacy of the watchmakers that propelled the brand into the future, take visitors on an ‘unforgettable journey through time.’

Zenith’s first round of 2022 debuts expands its Defy family, a series encompassing Zenith’s most eclectic designs. While the collection debuted more than fifty years ago, most current Defy models are decidedly contemporary, with the exception of the recently debuted Revival homage to the first Defy, the limited edition Defy “Bank Vault.”

We showed you the new Defy Skyline last week just as Zenith introduced it during LVMH Watch Week. While the Skyline was the brand’s highlight Defy debut, with a fully new design and mechanical display, Zenith also added extensions to several models in the Defy series. These debuts include the Defy 21 Chroma and the Defy Extreme Carbon (each with dual high-frequency escapements), and two new 36mm Defy Midnight watches with colorful dials and diamond-set bezels.

The Defy 21 Chroma’s 44mm matte white ceramic case provides the perfect frame for a colorful show on and underneath its dial. Even the watch’s strap and crown contribute to the watch’s rainbow theme.

The color show starts around the dial where, starting with red at 12 o’clock, Zenith represents the full spectrum along the markers and on the 1/100-of-a-second scale. Under the dial Zenith constructs its movement with the same colors (in the same order) in a metallic sheen, with each highlighting a different movement component. Even the chronograph counter hands are tipped in colors. 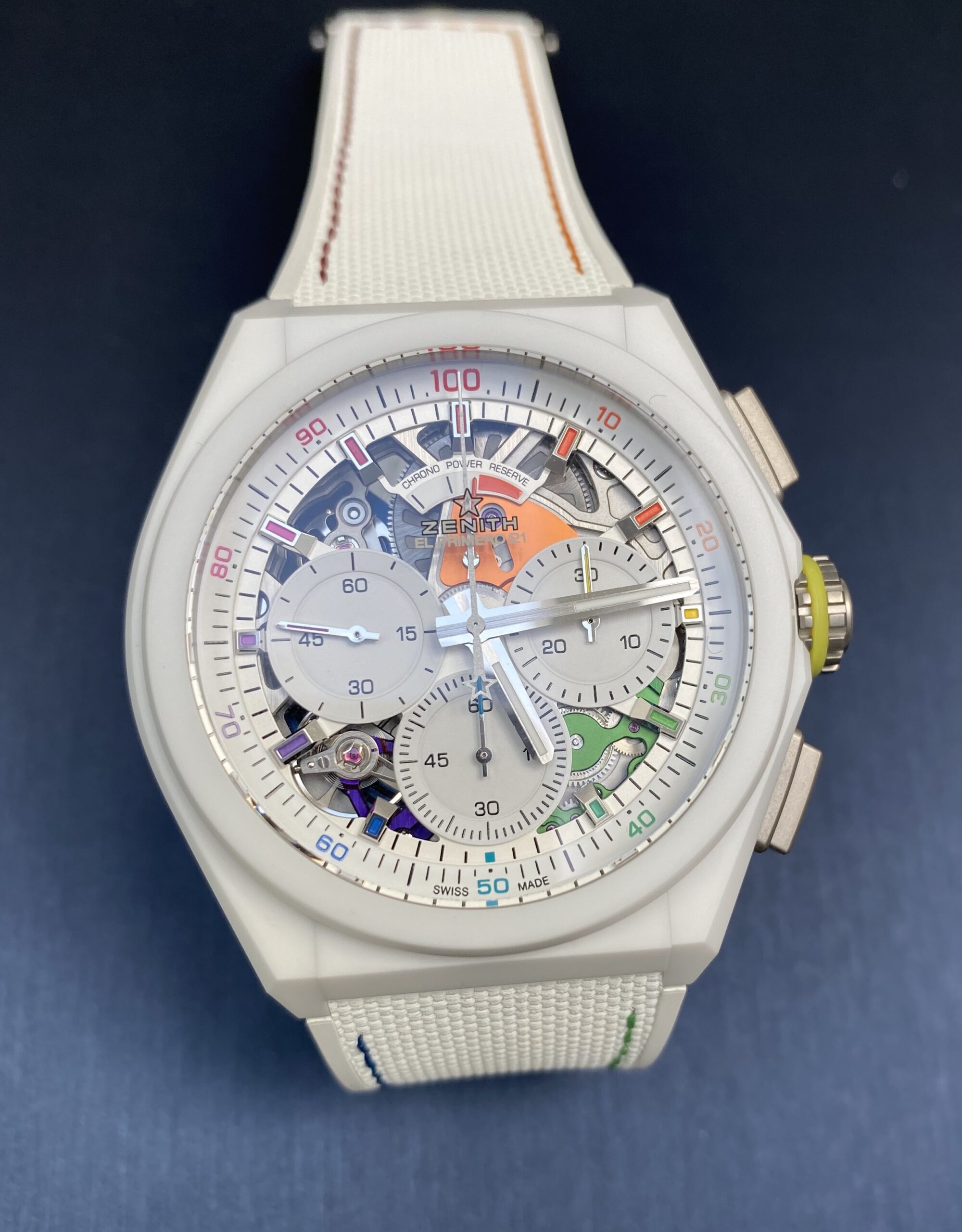 The movement here is the Zenith’s 1/100th of a second chronograph movement, the El Primero 9004 automatic (aka, the El Primero 21), which features two independent regulators and gear trains for the timekeeping and chronograph functions, operating at frequencies of 5Hz (36,000 VpH) and 50Hz (360,000 VpH), respectively. 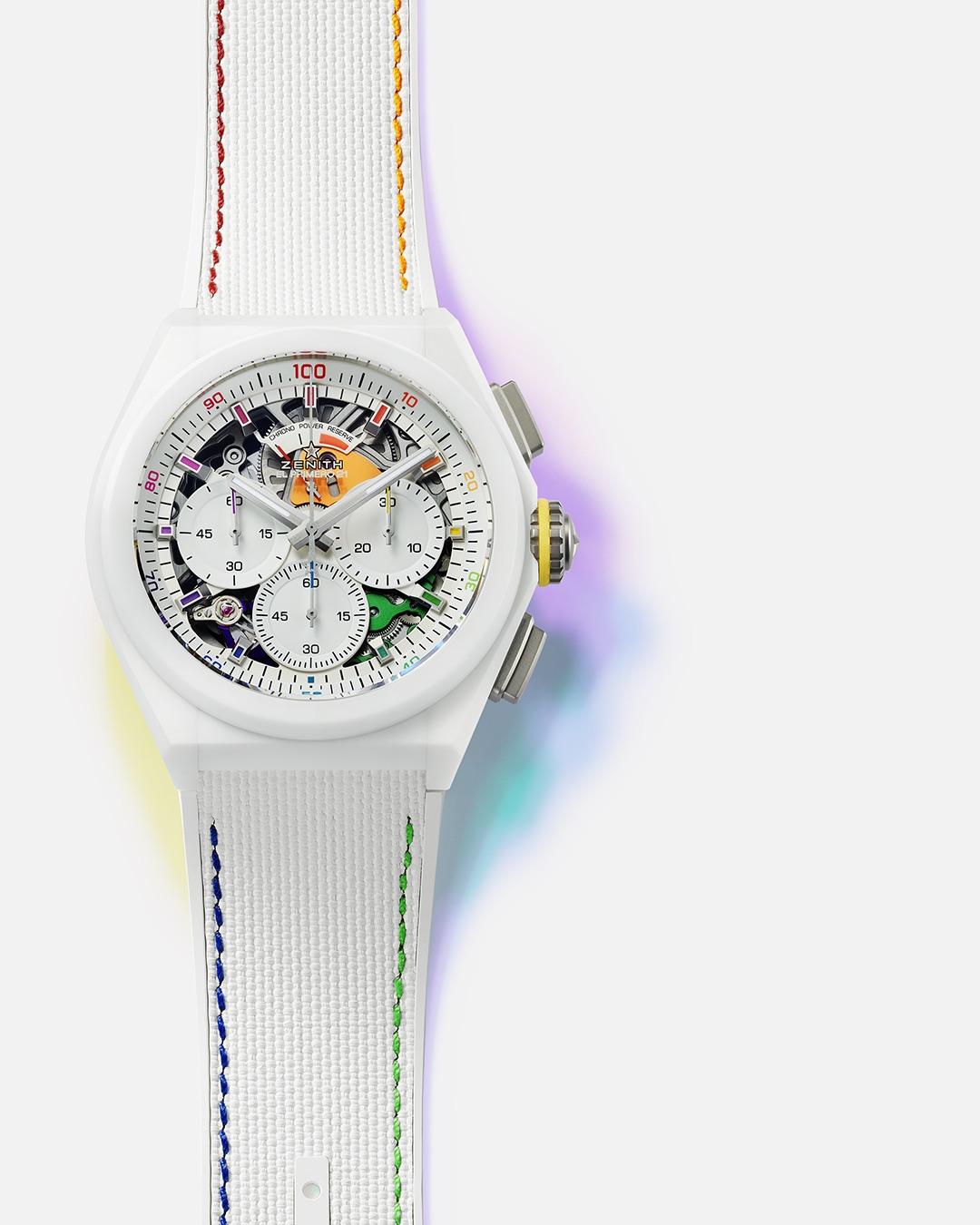 Seen first last year, the Defy Extreme is Zenith’s most indestructible model. With this latest example, Zenith finally adds the Defy Extreme to its growing list of Defy models constructed using some form of carbon in either its case, bracelet, or both. 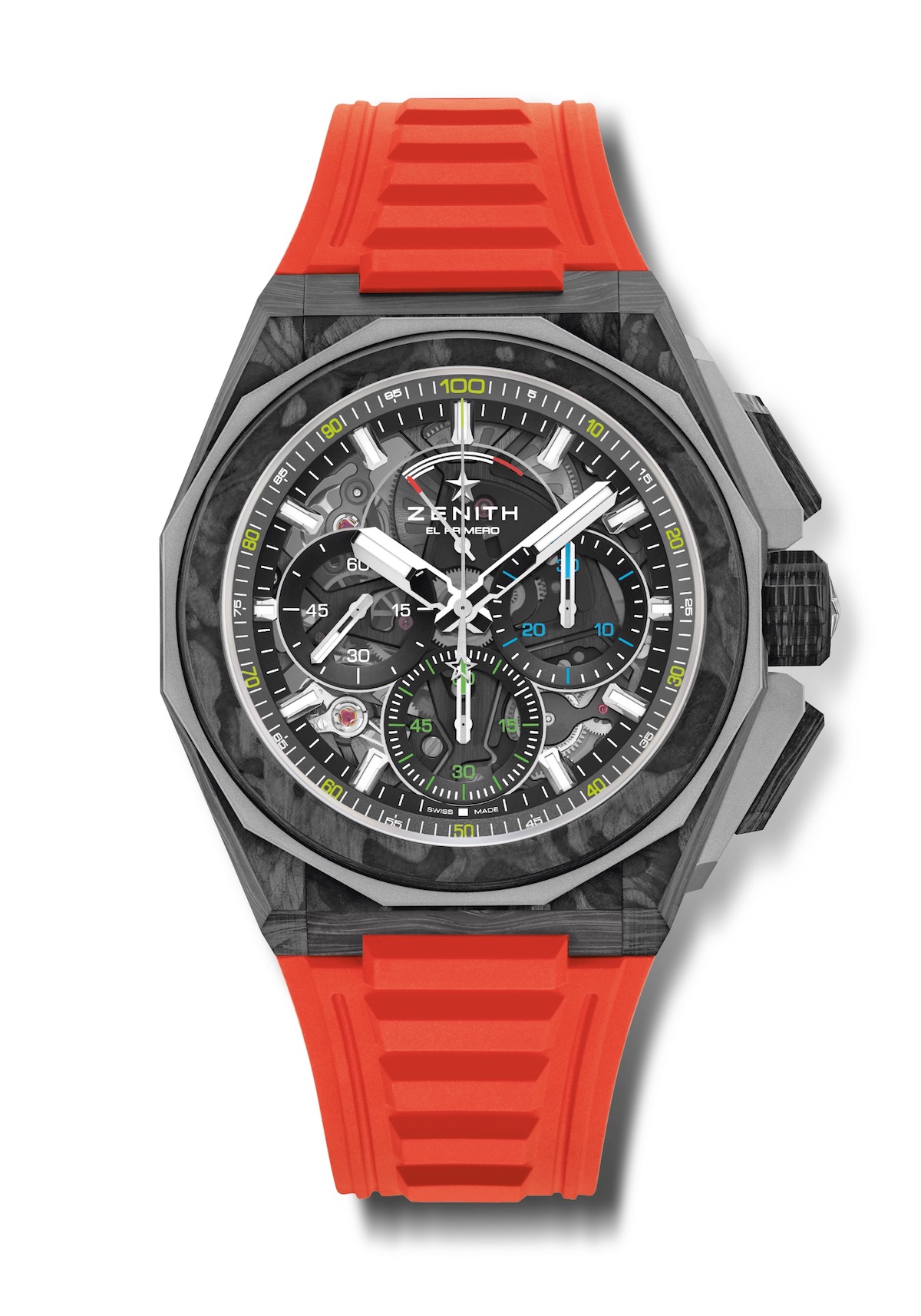 The watch catches your eye in part because, despite its generally dark profile, Zenith displays hints of color on the dial. The livery is inspired by Extreme E, the world’s first off-road electric rally racing championship, which Zenith officially times as a Founding Partner. 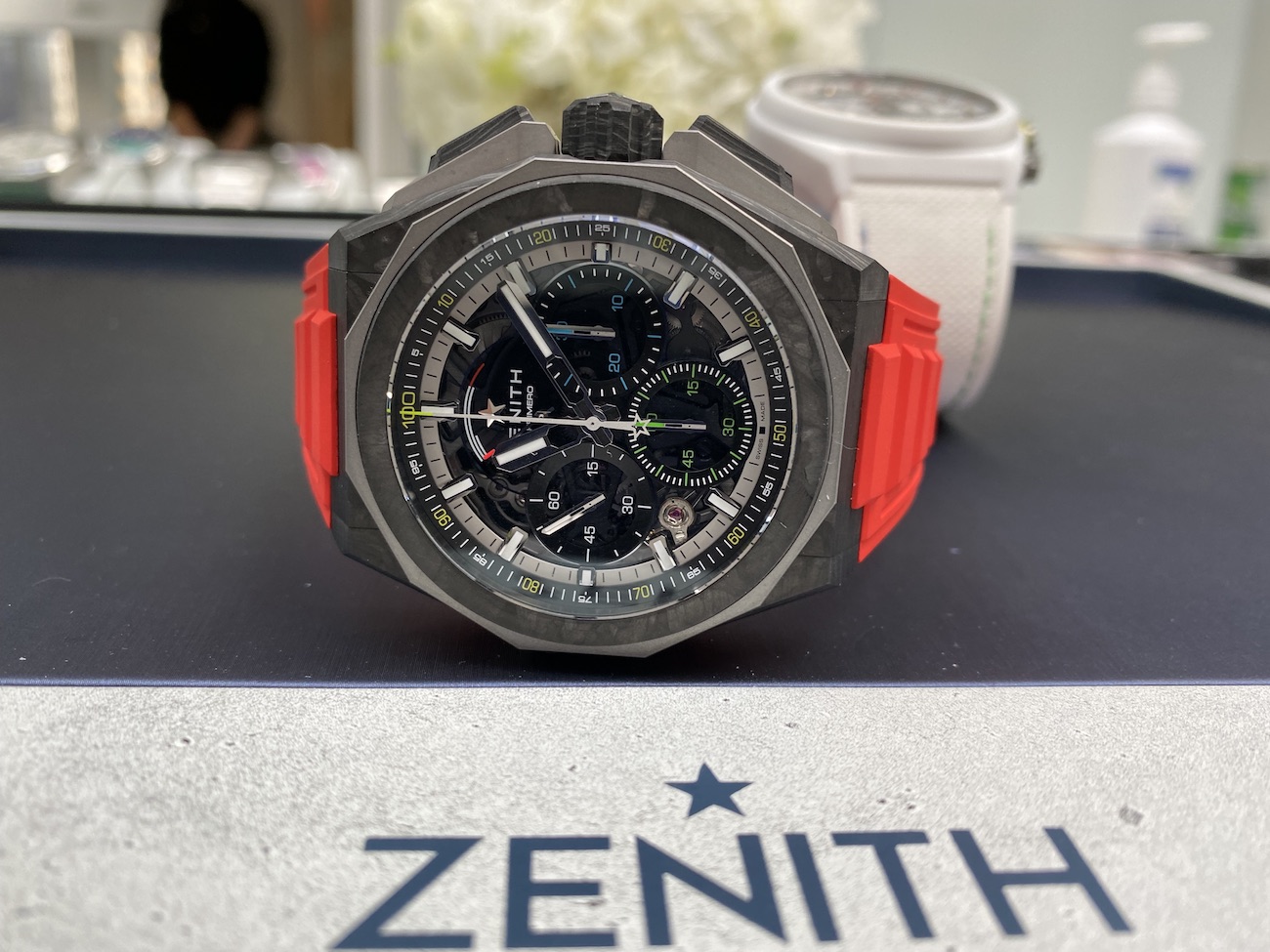 In addition to the above debuts, Zenith adds two new Defy Midnight watches to this collection’s roster of automatic 36mm steel watches with starry dials and diamond-bezels. The new watches continue to enhance Zenith’s apparent focus on adding touches of color to the year’s wristwear. 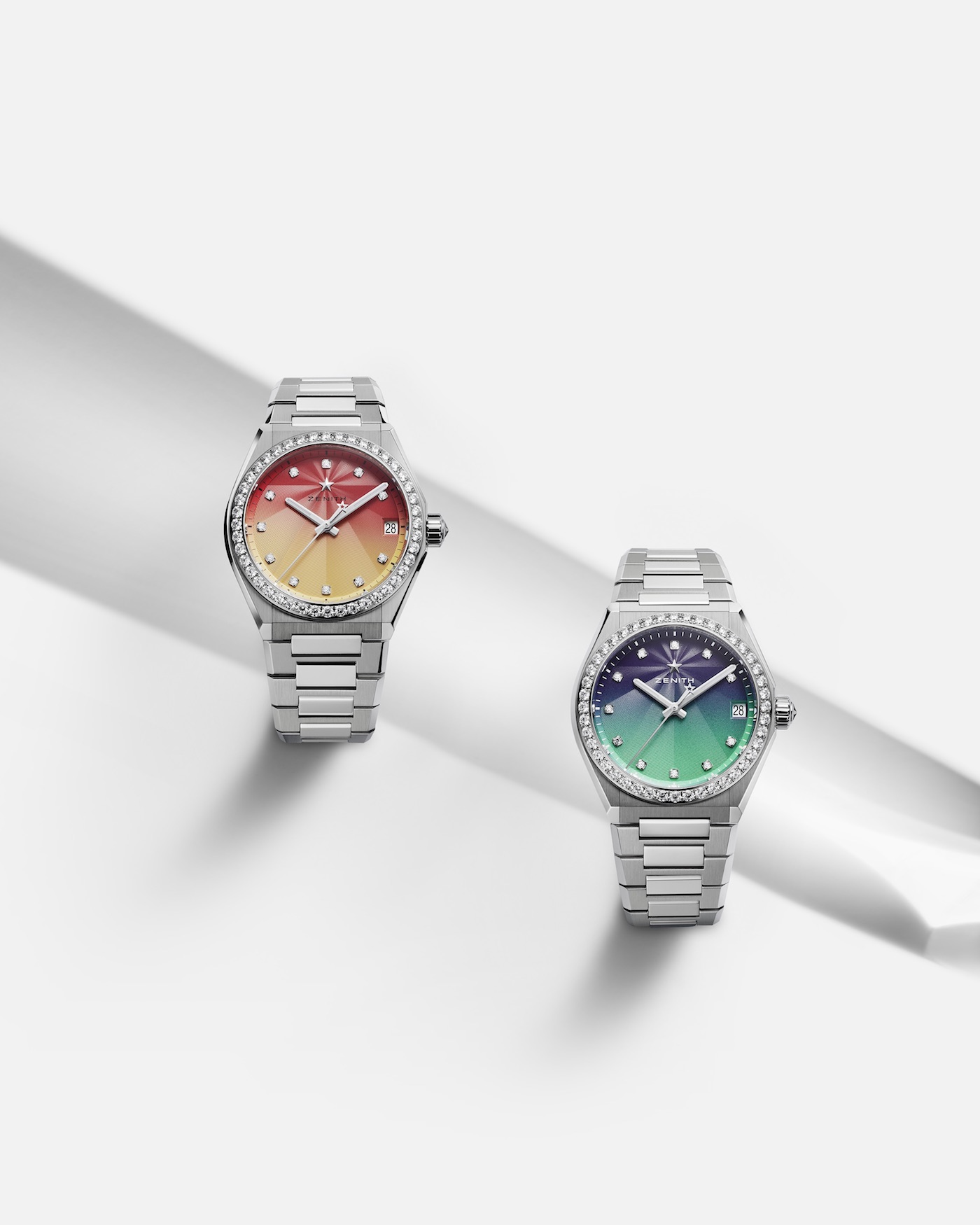 While not rainbow-flecked like the larger Defy debuts noted above, each Defy Midnight debut references a colorful natural nightime phenomenon. Both feature a guilloché engraved dial with a pleasing radiant wave pattern.

One, the Defy Midnight Sunset, offers a dial that nicely transitions from warm red to deep yellow, a gradiant scheme meant to recall the evening’’s final rays of light. 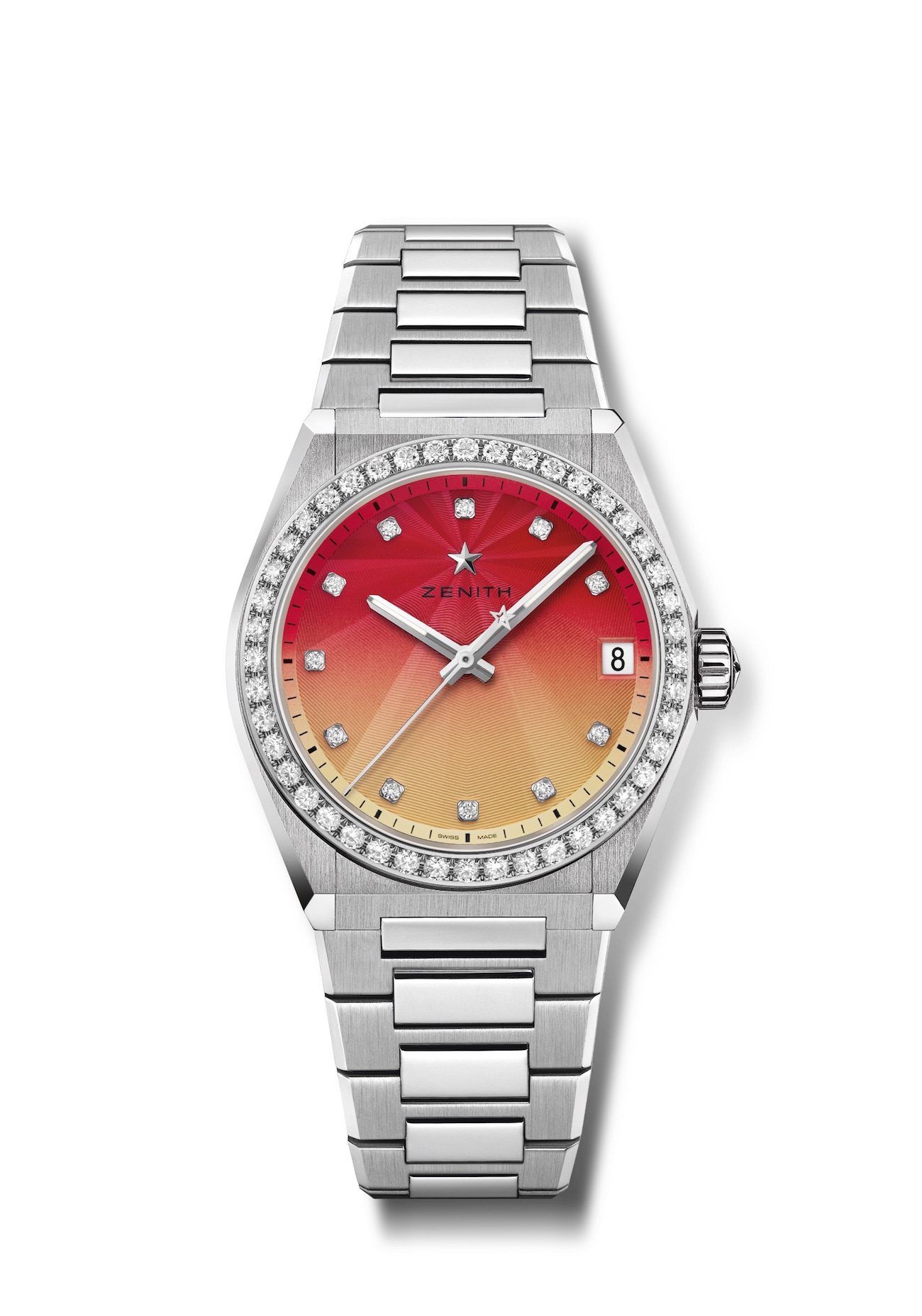 The Defy Midnight Borealis, as its name implies, evokes the aurora borealis or northern lights phenomenon. Its midnight blue dial gradually shifts to emerald green towards to bottom. Zenith applies diamonds on every hour marker except at 3 o’clock, where we see the date window. 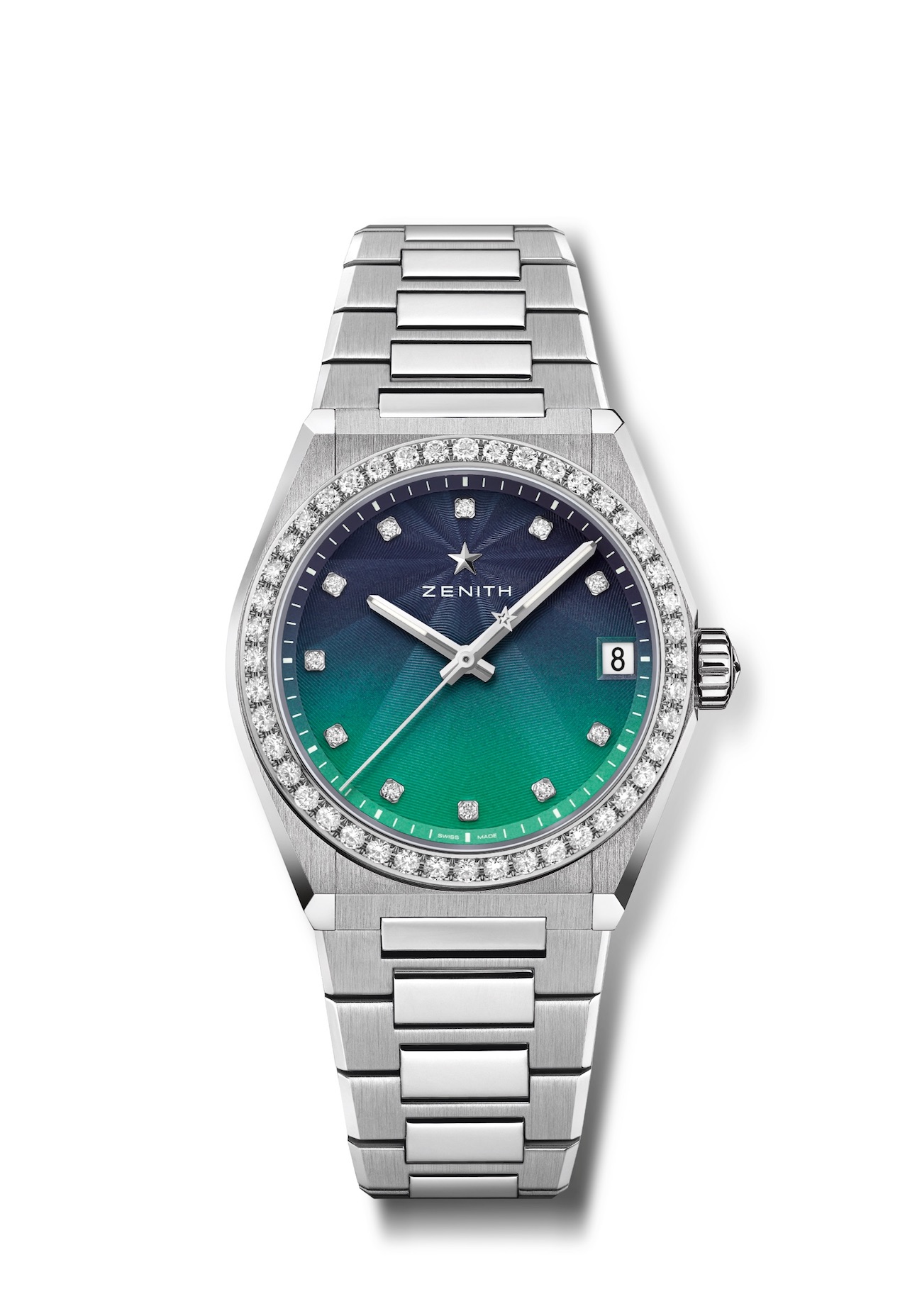 As seen through a sapphire case back, each Defy Midnight is powered with Zenith’s automatic Elite 670 caliber, which provides a power reserve of fifty hours. And, as with all Defy Midnight steel bracelet models, Zenith includes three additional straps made of leather, textile and rubber, all of which can be easily changed without requiring any tools.

For the new Defy Skyline, Zenith starts with the original collection’s octagonal case and twelve-side faceted bezel. But then Zenith adds extra edginess with a larger case size (41mm) and a technical dial display close to Zenith’s heart: a constantly running 1/10-of-a-second indicator. 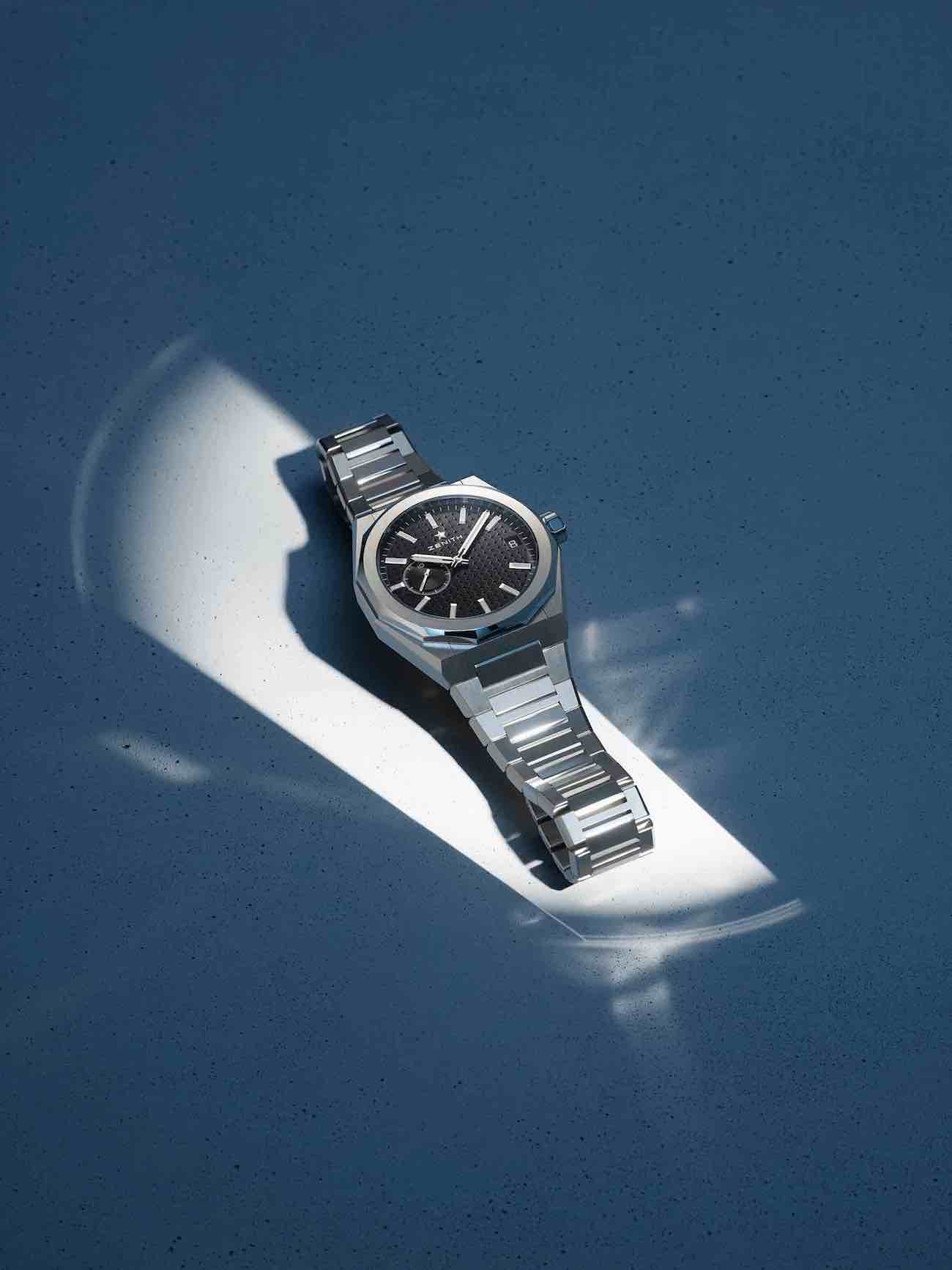 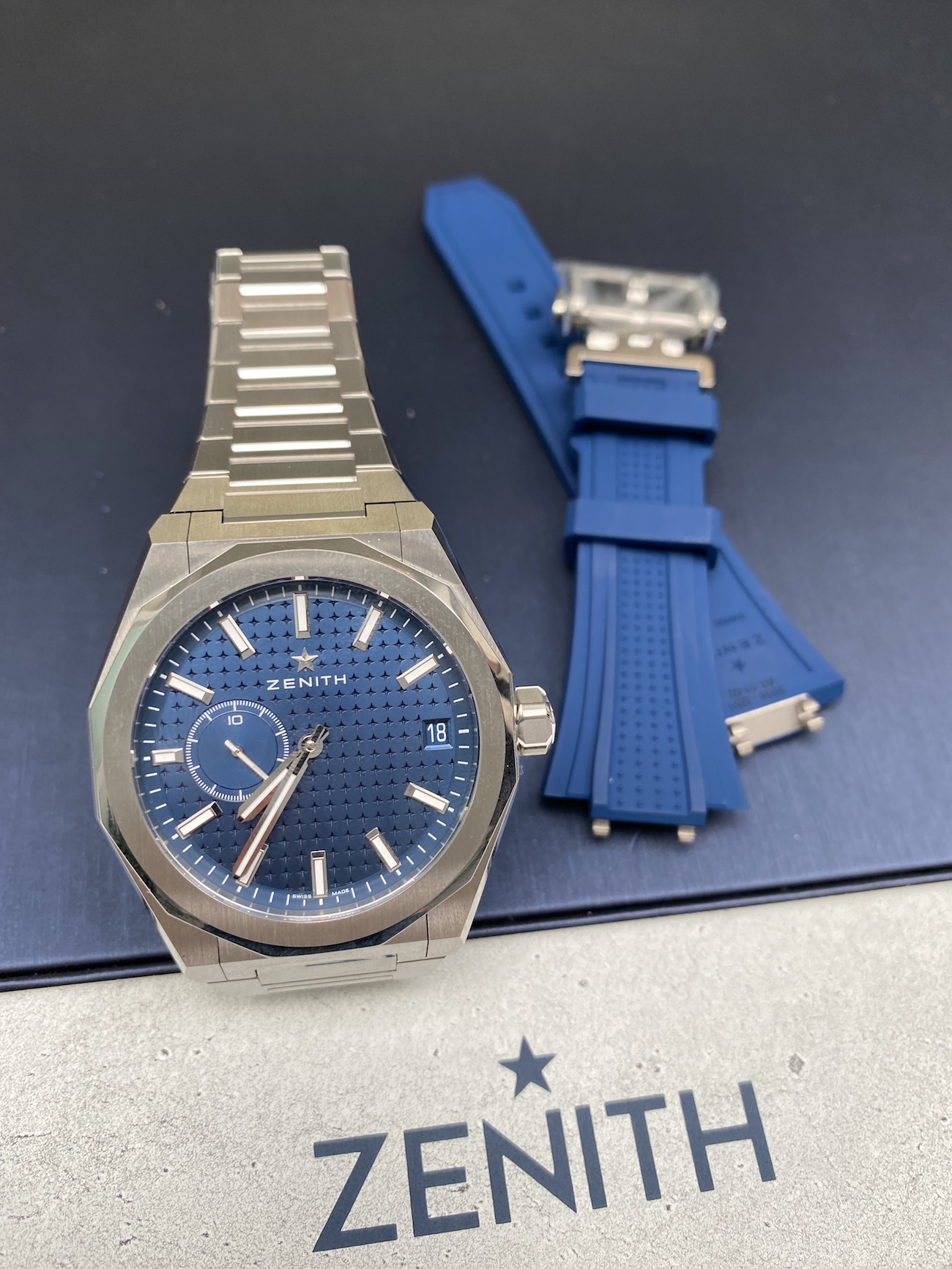 As the hand is connected directly to the escapement, Zenith refers to as a “natural” fraction-of-a-second indication. And to best utilize the 1/10-second display when setting the time, Zenith provides a stop-second mechanism built directly into the crown. 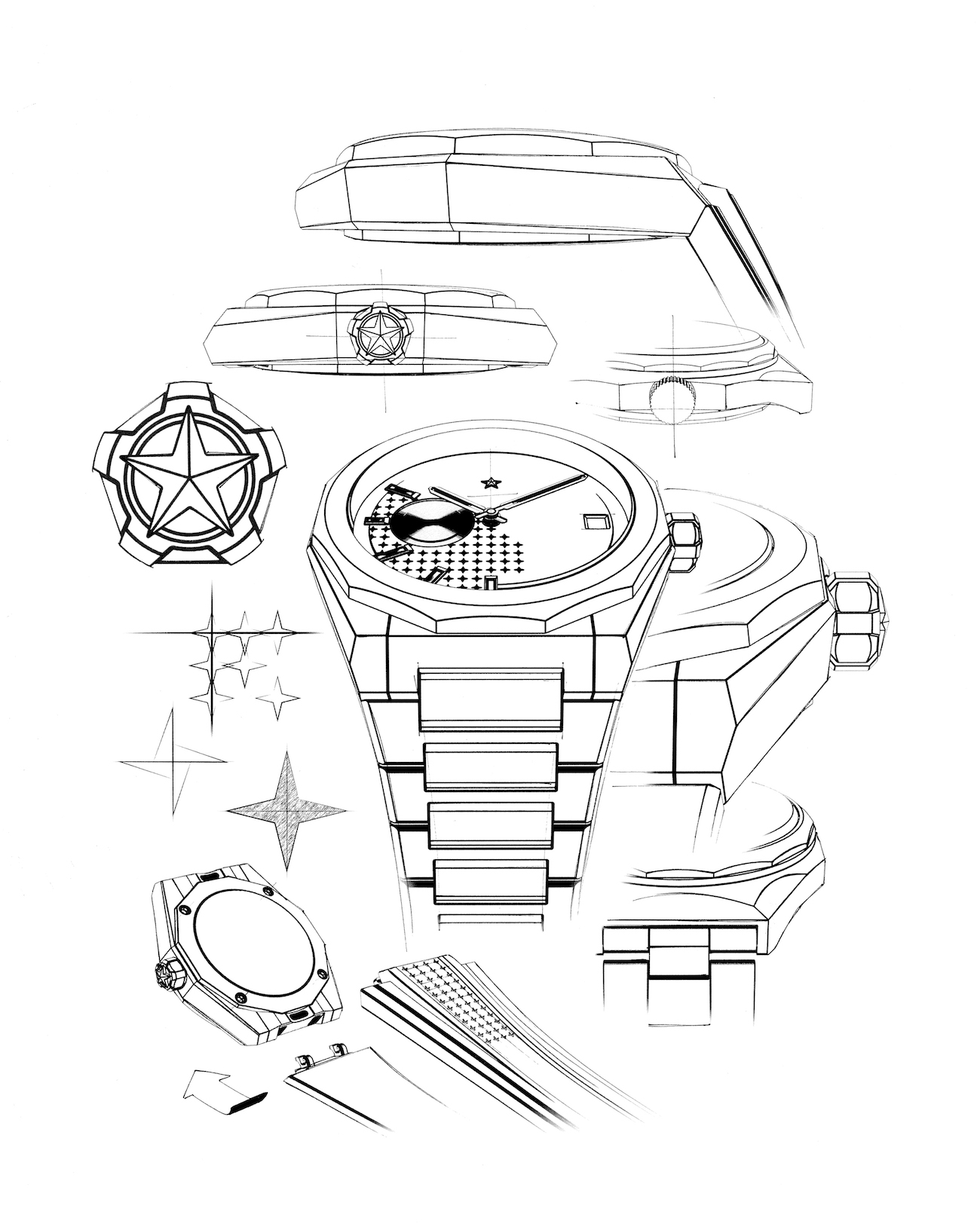 The new Zenith Defy Skyline is a fairly spare time-only watch (with date) interchangeable steel bracelet/rubber strap watch that offers contemporary styling with clear references to its Defy antecedents, especially with its embrace of that collection’s twelve-sided bezel. 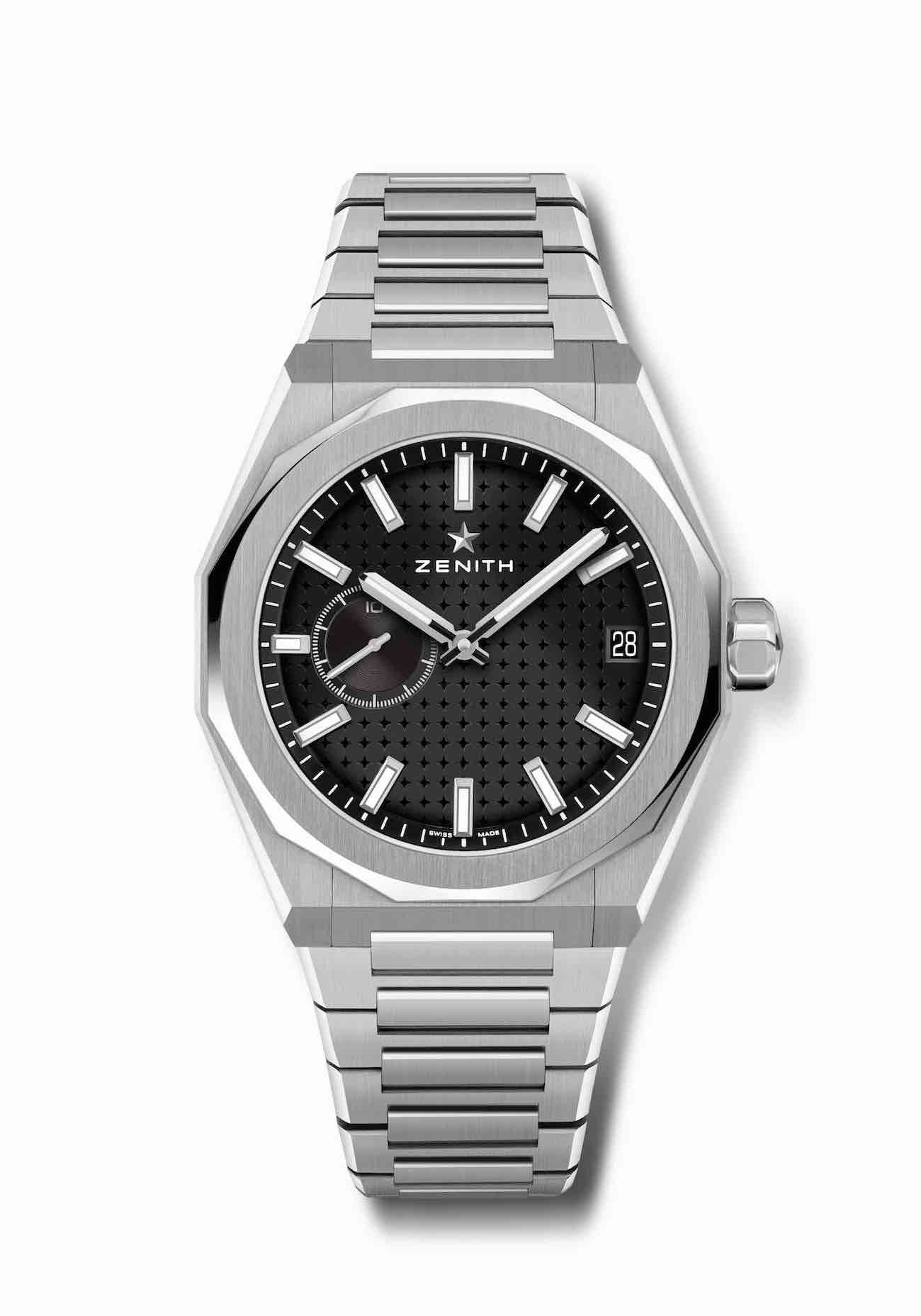 Zenith is offering three debut star-patterned dials for the new collection in metallic blue, black or silver with (included) matching rubber straps. The color scheme carries into the movement itself as Zenith finishes the caliber in tones of grey and silver, with elements in blued metal. 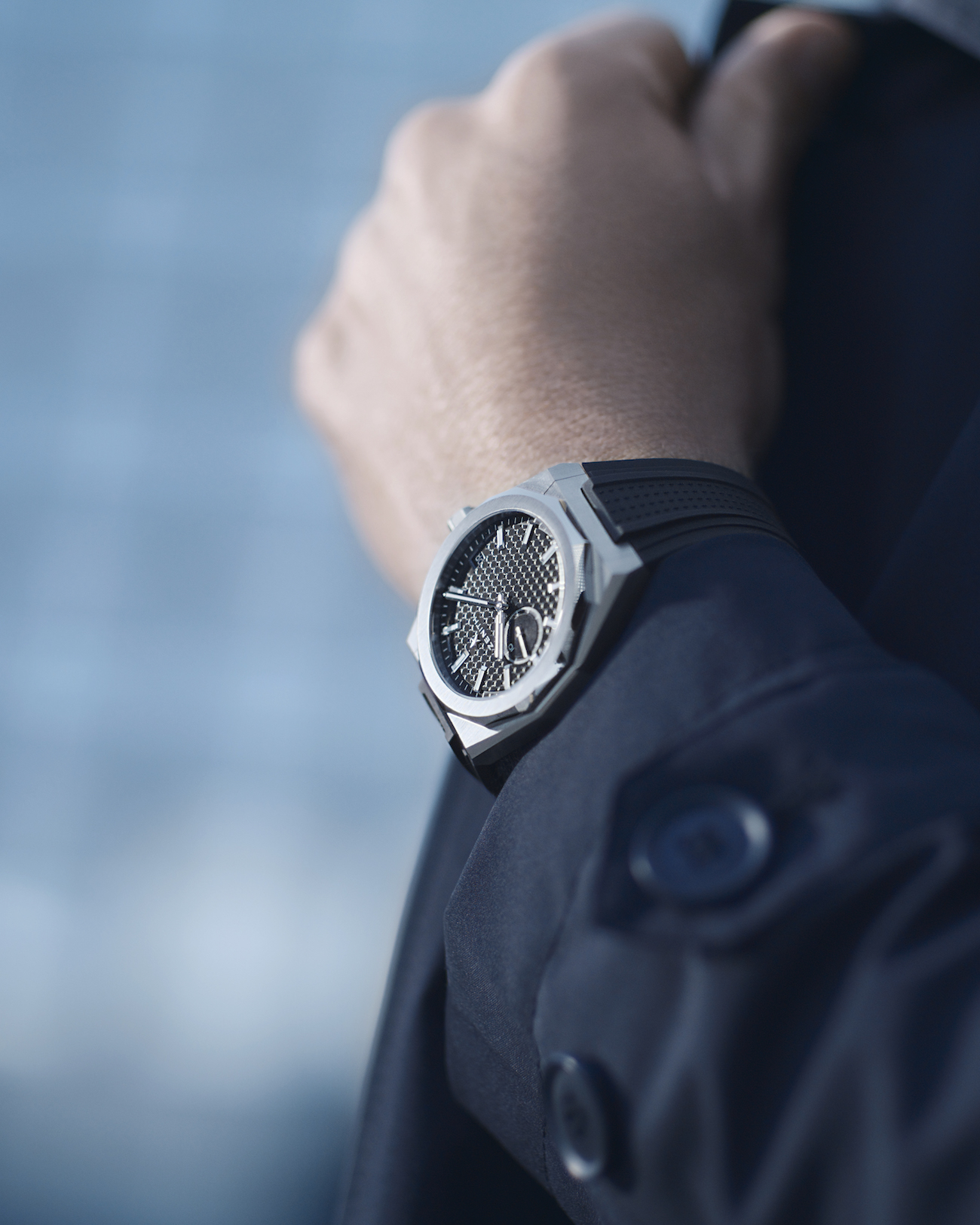 Functions : Hours and minutes in the center, 1/10th of a second counter at 9 o’clock. Date.

Hour markers and hands are rhodium-plated, faceted and coated with SuperLuminova.

Zenith releases the third and final watch in a special series that debuted in the metal in 2019, but had its origins fifty years ago.

That original watch, depicted with a (then non-existent) black, grey and gilt dial, was seen on the wrist of a character in the Japanese anime series starring Arsene Lupin III. The same character, Daisuke Jigen, wears another Zenith A384 later in the series, again with a dial Zenith had not yet designed.

Zenith finally created a genuine Chronomaster Revival Lupin The Third watch in 2019, followed by a second edition in 2020, with each model depicting the ‘panda’ style dials seen in the animated series. 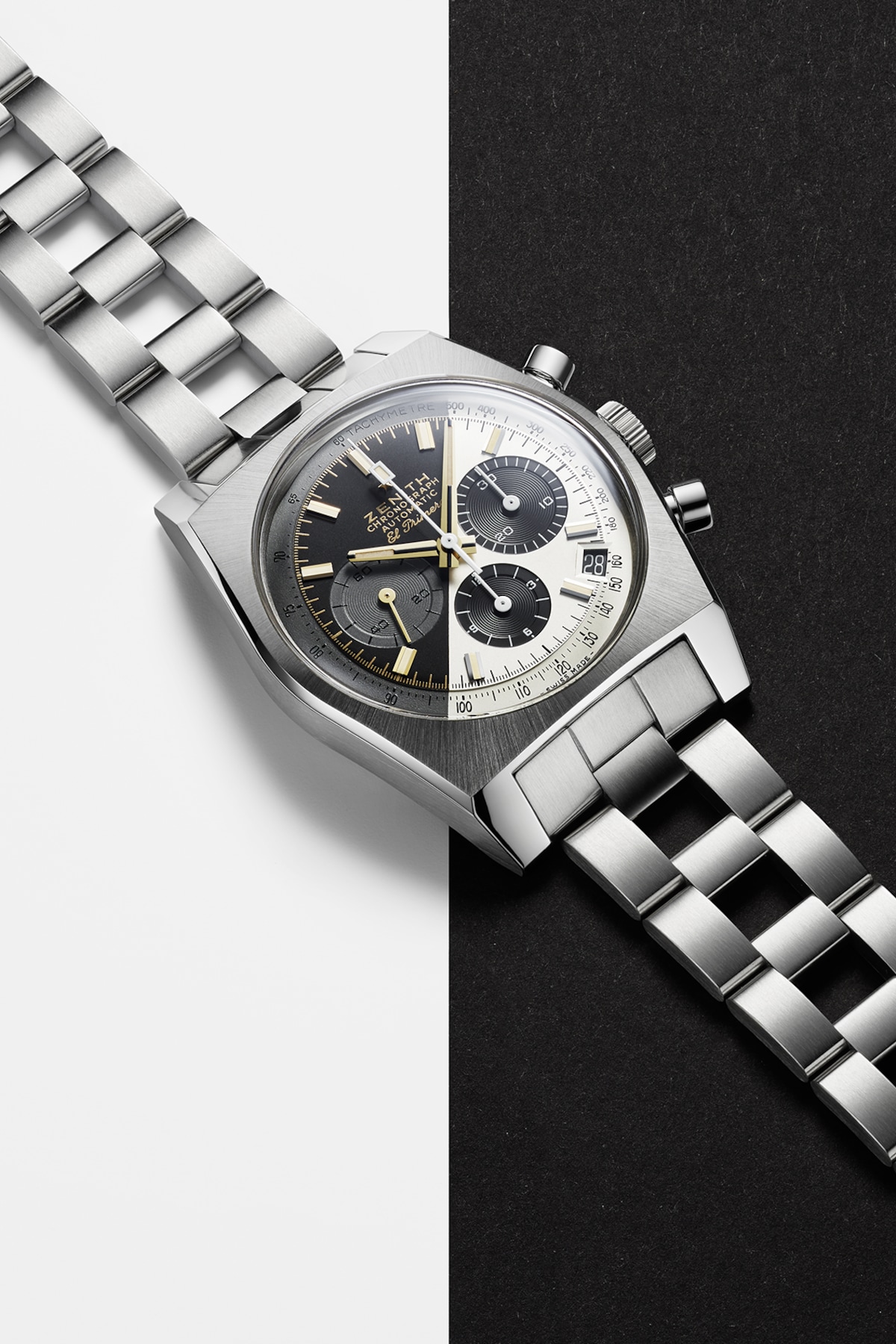 This year the watchmaker finalizes the series with this appropriately named debut—and the design is both unexpected and exhilarating.

The new watch, a limited edition of 250, combines the two previous Zenith dials in this Lupin III series. On the left, the watch features a semi-glossy black dial, grey counters and golden markers and hands from the first edition. On the right side Zenith places a white dial with contrasting black counters in the “panda” layout inspired by the second Lupin the Third edition. 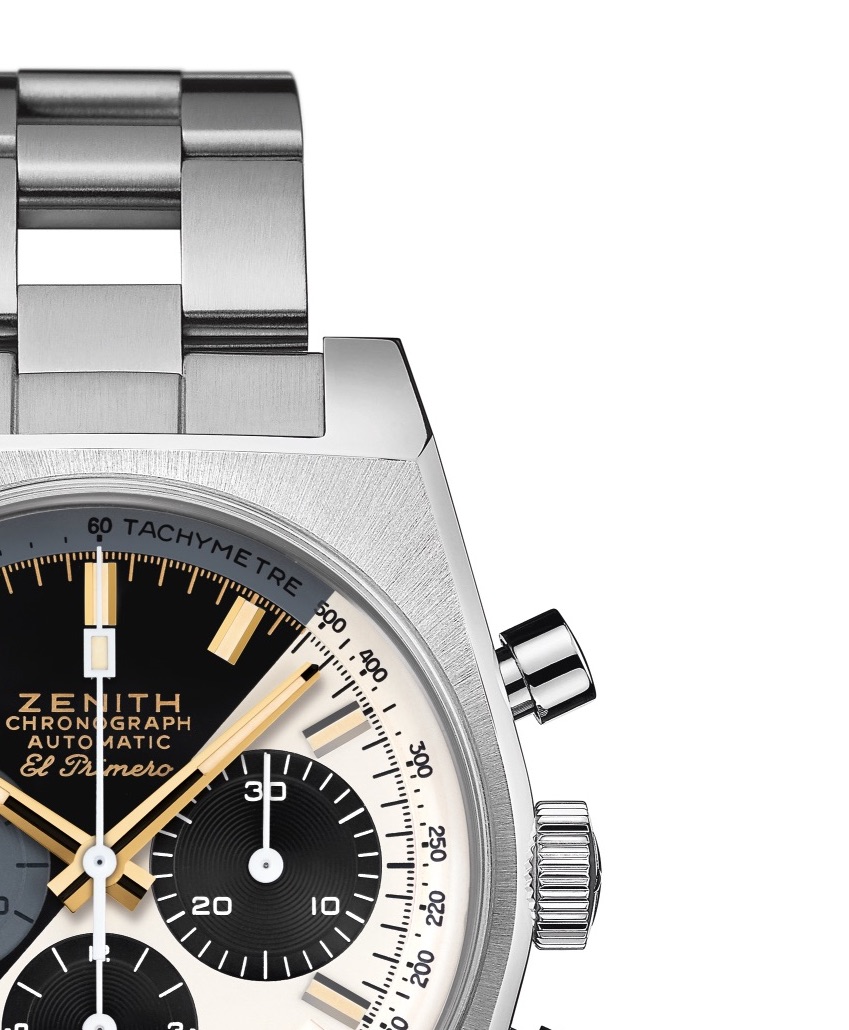 The new Zenith Chronomaster Revival Lupin The Third – Final Edition features a 37mm titanium case in the proportions of the original A384. Inside Zenith fits its superb El Primero 400 automatic integrated column-wheel chronograph (see specifications below). The rotor, according to Zenith displays an engraving of Daisuke Jigen through its sapphire caseback. We’ll show you the back of the watch as soon as we obtain images from Zenith.

Movement: El Primero 400 Automatic column-wheel chronograph with a frequency of 36,000 Vph (5 Hz) and a power reserve of 50 hours.

Zenith transforms two of its most complex watches into cosmic messengers with a new galactic theme, eye-catching blue PVD components and clear sapphire cases.   The Le Locle watchmaker has re-finished and re-configured components within the existing Defy Zero G and the Defy 21 Double Tourbillon, to create a stunning contemporary limited edition version of each watch.

For this update, Zenith brings space travel to the wrist with a miniature mosaic depicting Mars on the dial. Made by hand using meteorite, aventurine glass and miniature painting, the red planet is seen on the small seconds, partially eclipsed by the hour and minute dial.

Zenith finishes the mainplate and the bridges in a blue tone with contrasting metallic-grey chamfers, dotted with white stars. The wearer can also see this space-inspired finish on the movement’s cylindrical container, visible through the sides of the case. Zenith has also rebuilt the movement with a more contemporary architectural profile that occupies thirty percent less space than the original movement.

You might recall that the Defy Zero G features Zenith’s El Primero 8812 S manual movement with a gimbal that maintains the balance and spring in a flat position, overcoming gravity’s effects on the watch’s chronometric precision (See complete specifications list below).

Zenith engraves stars on the dial of the new Defy 21 Double Tourbillon Sapphire and exposes a newly blued mainplate (a first for Zenith) through its skeleton dial. This watch still turns heads with two independent tourbillons. One rotates in sixty seconds at 36,000 vph (for time-keeping) while the second rotates once in five seconds at 360,000 vph to regulate the chronograph timer.

The twenty owners of these two new watches can enhance their galactic experience by taking advantage of a special offer from Zenith. The watchmaker has teamed with Novespace, a subsidiary of the French National Space Center, to offer each owner a parabolic zero-gravity flight, slated for next February at the Novespace facility in Bordeaux.

Functions : Hours and minutes in the center. Double Tourbillon: 1 escapement for the Watch (36,000 vph / 5 Hz – cage makes a turn in 60 second) 1 escapement for the Chronograph (360,000 vph / 50 Hz – cage makes a turn in 5 seconds). 1/100th of a second Chronograph: Central chronograph hand that makes one turn each second, 30-minute counter at 3 o’clock, 60-second counter at 6 o’clock, chronograph power-reserve indication at 12 o’clock. New bicolor signature on plates and bridges + milled Starry Sky.