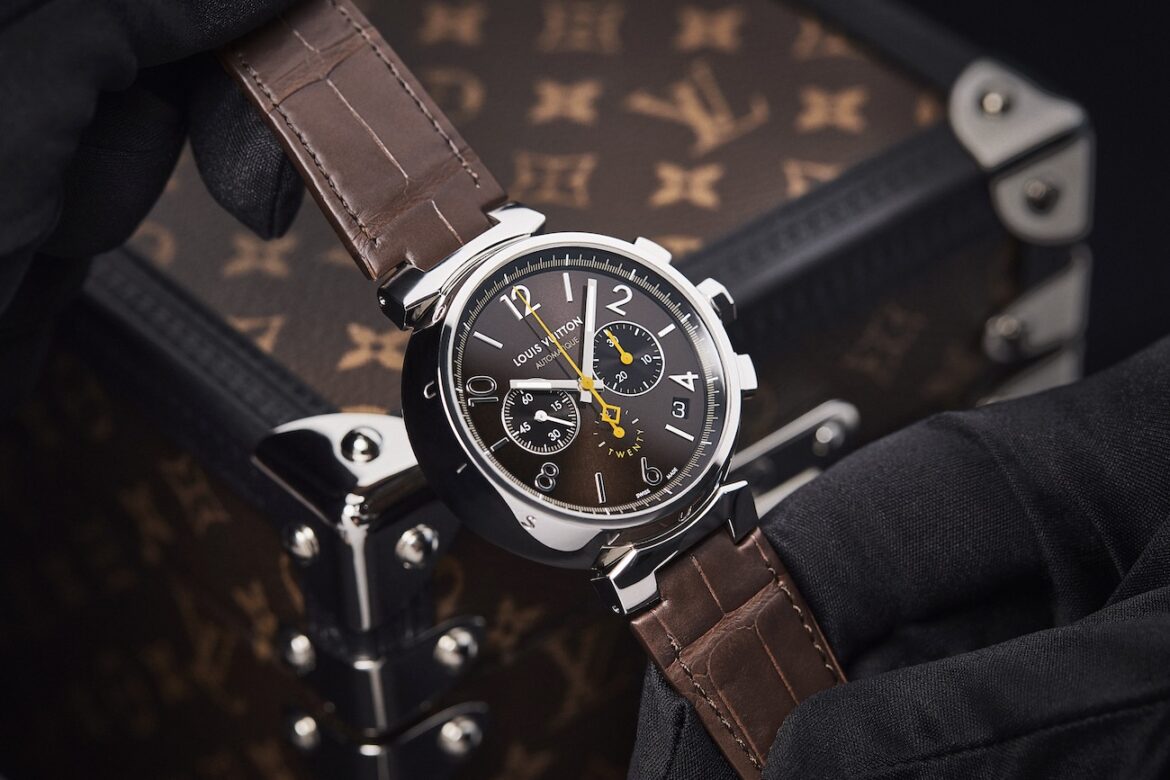 When Louis Vuitton debuted its Tambour collection twenty years go, watches made by international fashion houses were primarily quartz-powered and mass-produced. With a few exceptions, notably Cartier, Chopard, Hermès, Gucci and Dior, global clothing and accessories makers have historically found the high-end watchmaking market too challenging to enter and succeed, beyond launching a few novelty pieces or as a partner with an existing Swiss maker.

But with Tambour, Louis Vuitton entered into high-end watchmaking with serious intent and long-term goals that, twenty years later, have successfully steered the fashion house to be recognized as a peer among the world’s leading makers of high-end watches.

To celebrate the importance of the Tambour collection to its success as a high-end watchmaker, Louis Vuitton this year launches the Tambour Twenty, a limited edition chronograph of 200 pieces that pays tribute to the original Tambour. 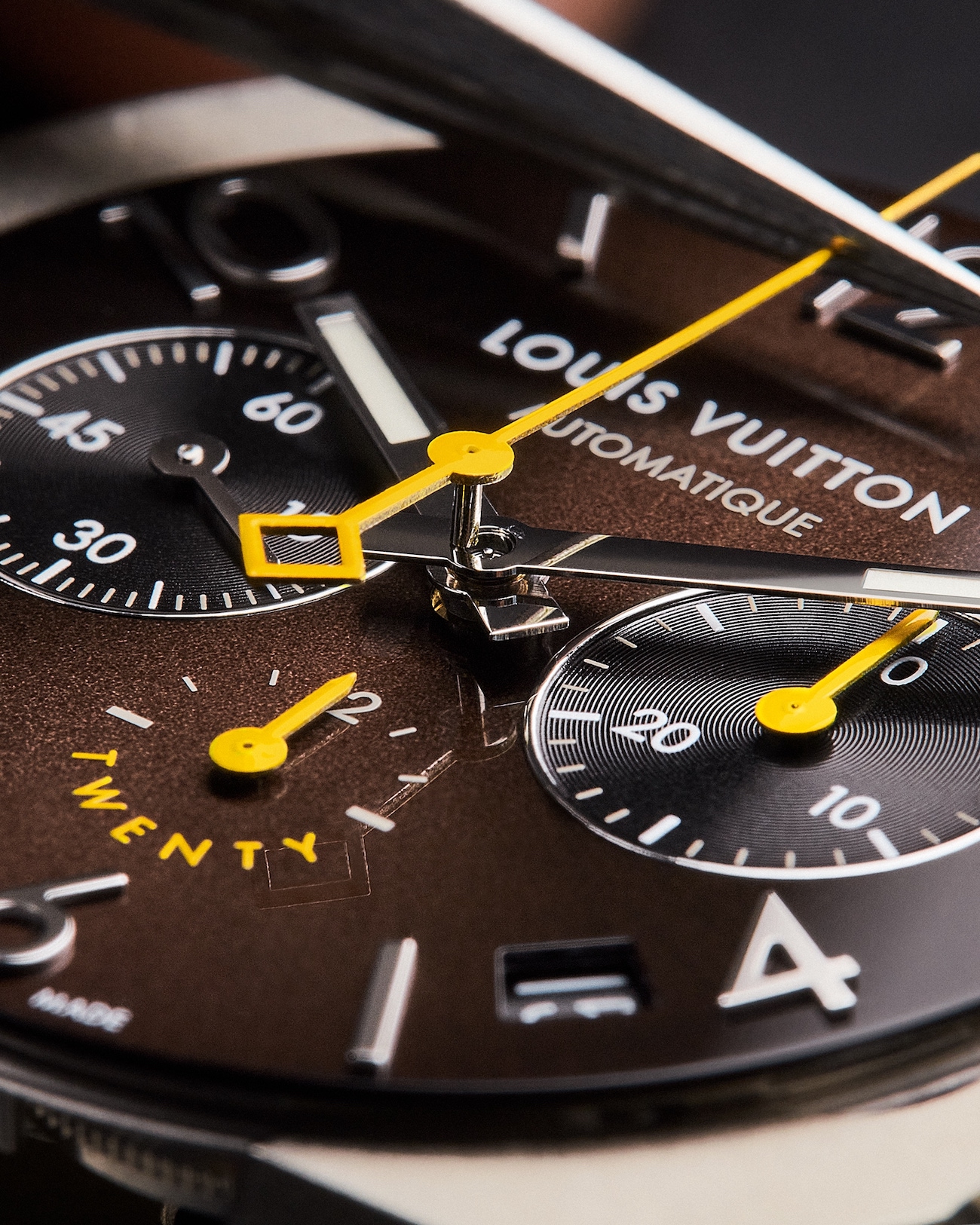 For the limited edition, Louis Vuitton revives the original Tambour’s deep, flared steel case that widens at its base (tambour is French for drum).  The celebratory watch is again engraved around its 41.5mm case with the twelve-letter Louis Vuitton name, with each letter corresponding to each hour marker.

And as on the original series, the new limited edition model features a sun-ray brushed brown dial that displays seconds with a long yellow hand colored to echo the threads Louis Vuitton utilizes in much of its leatherwork. 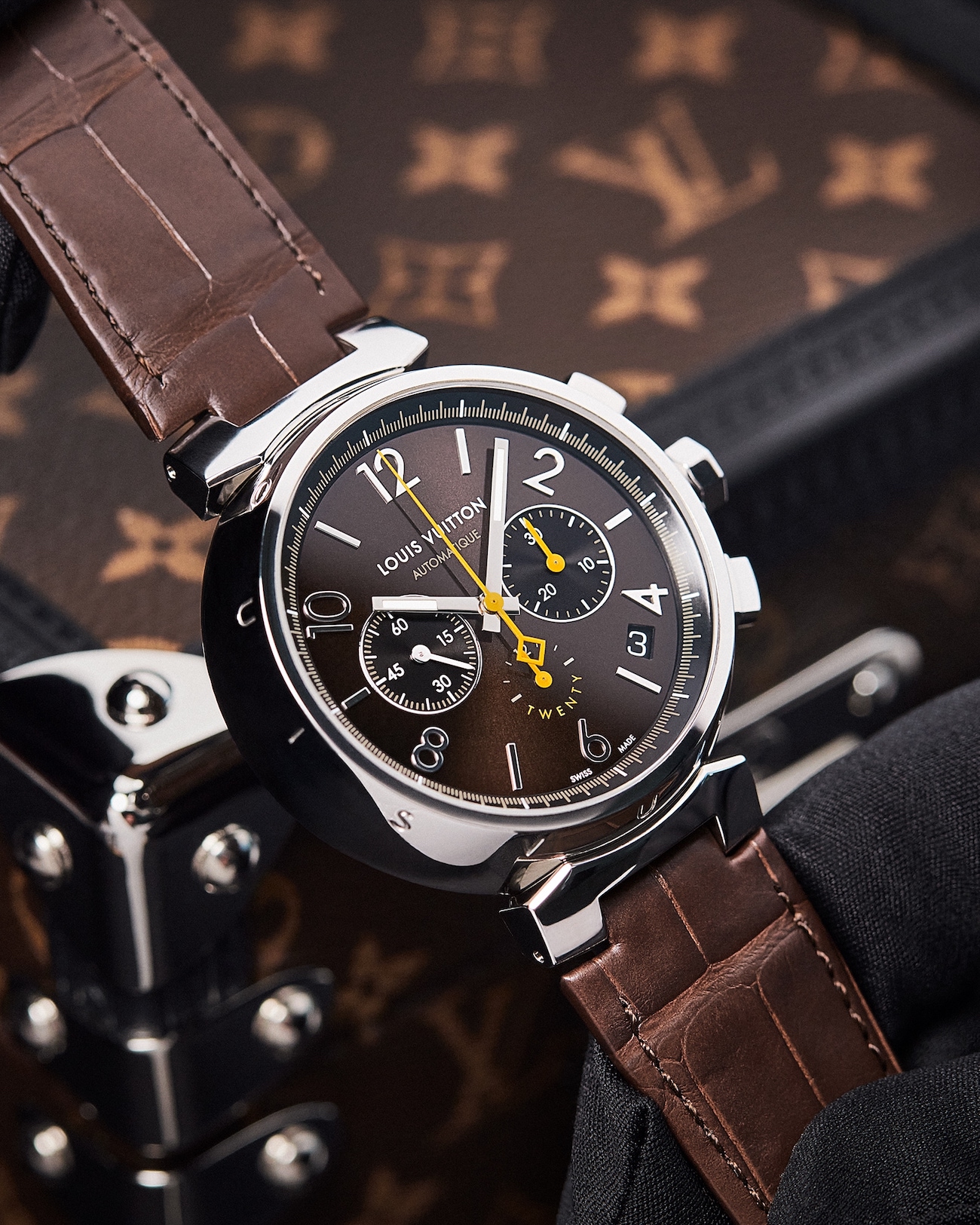 While ETA-based movements powered the original Tambour time-only and GMT models in the premiere series twenty years ago, Louis Vuitton strategically teamed with its sister company Zenith to supply the base movement for the first Tambour chronograph. 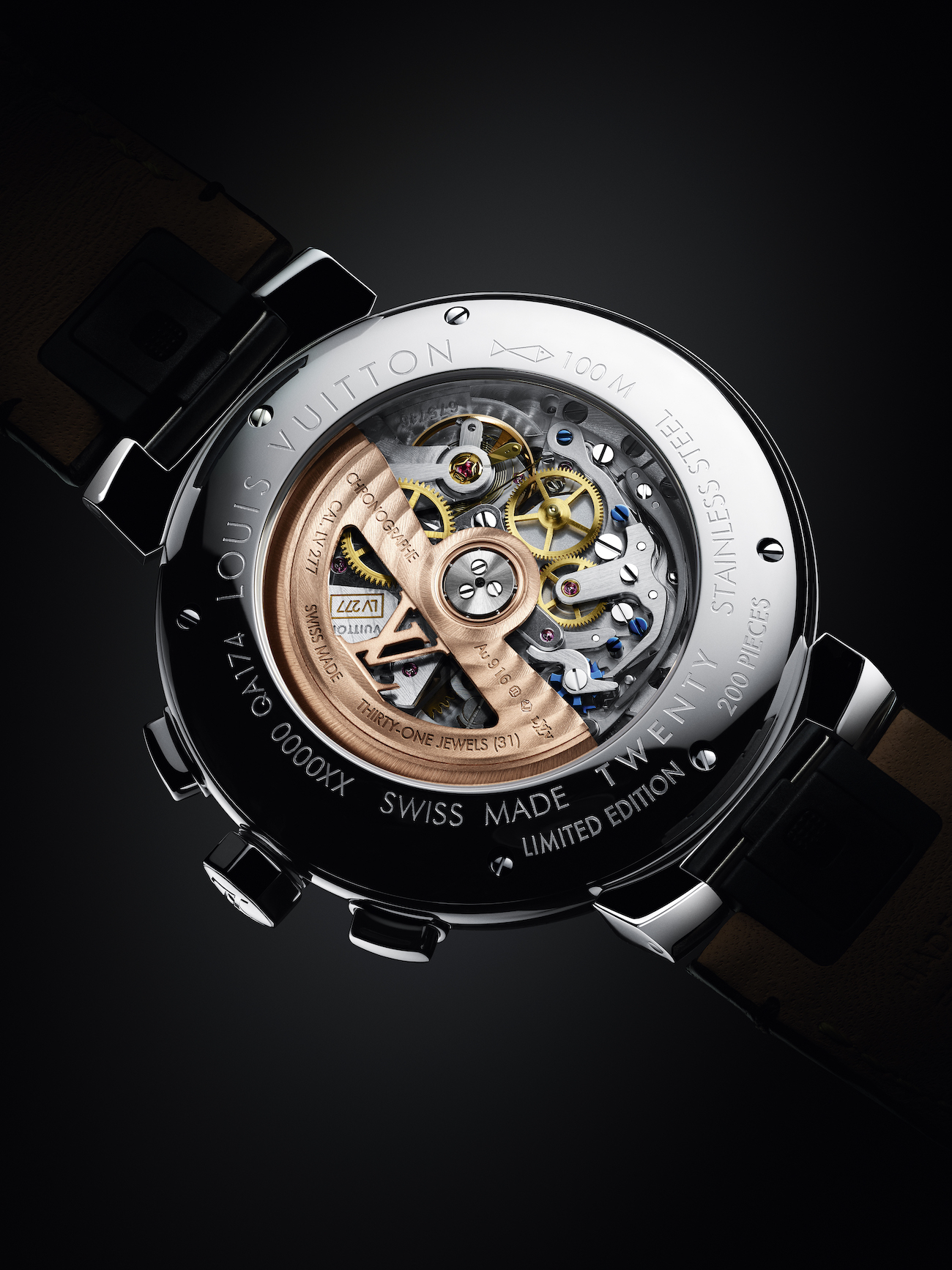 That movement, the LV277, based on a Zenith El Primero caliber, again powers the new watch, offering the high-frequency, tenth-of-a-second precision built-in to Zenith’s famed series. Louis Vuitton has placed a 22-karat-gold rotor on the movement, which offers fifty hours of power reserve. 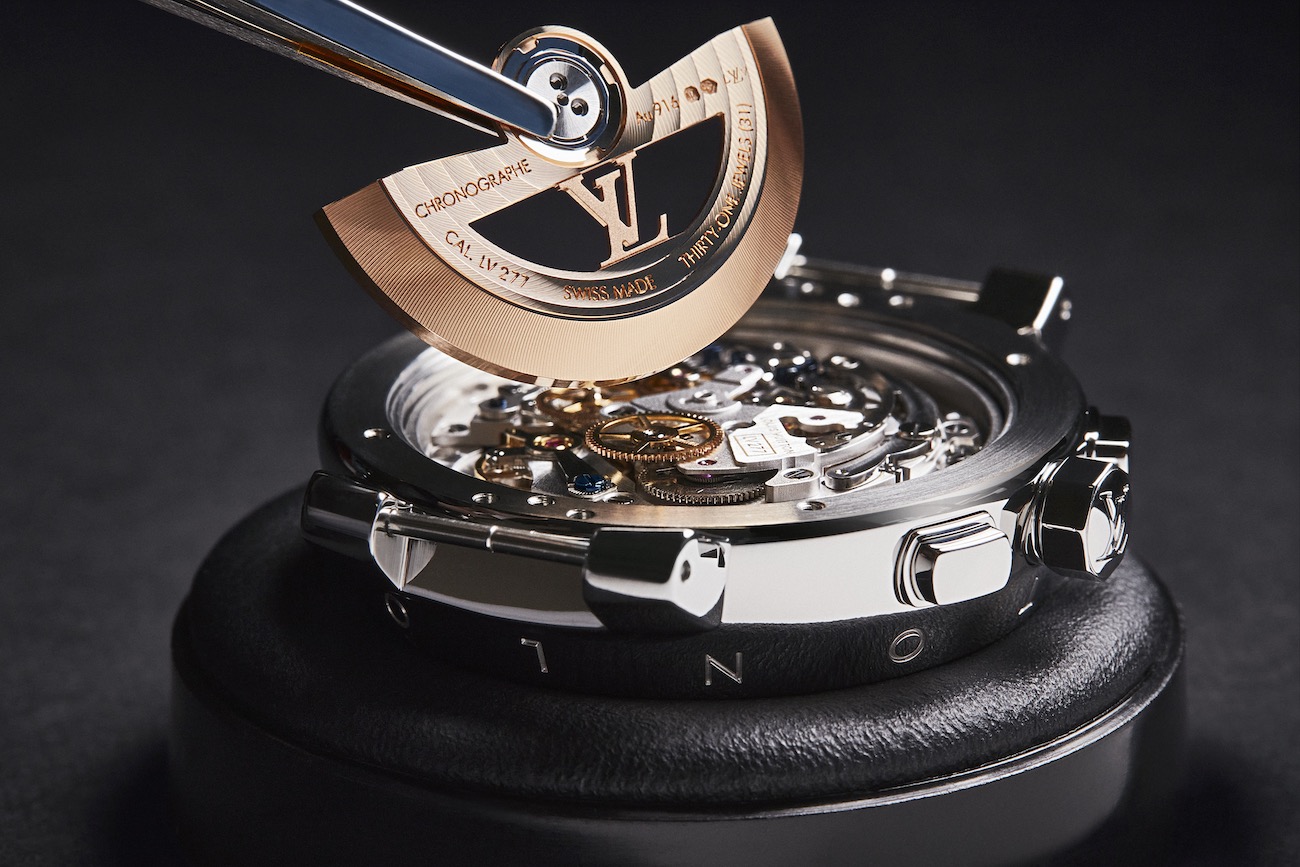 “Watch enthusiasts will recognize all the features that made the Tambour’s design so unique,” says Jean Arnault, marketing and development director for Louis Vuitton watches. “While this limited edition is a true concentrate of everything that made this watch stand out, it also boasts brand new features that will set it apart for collectors.” 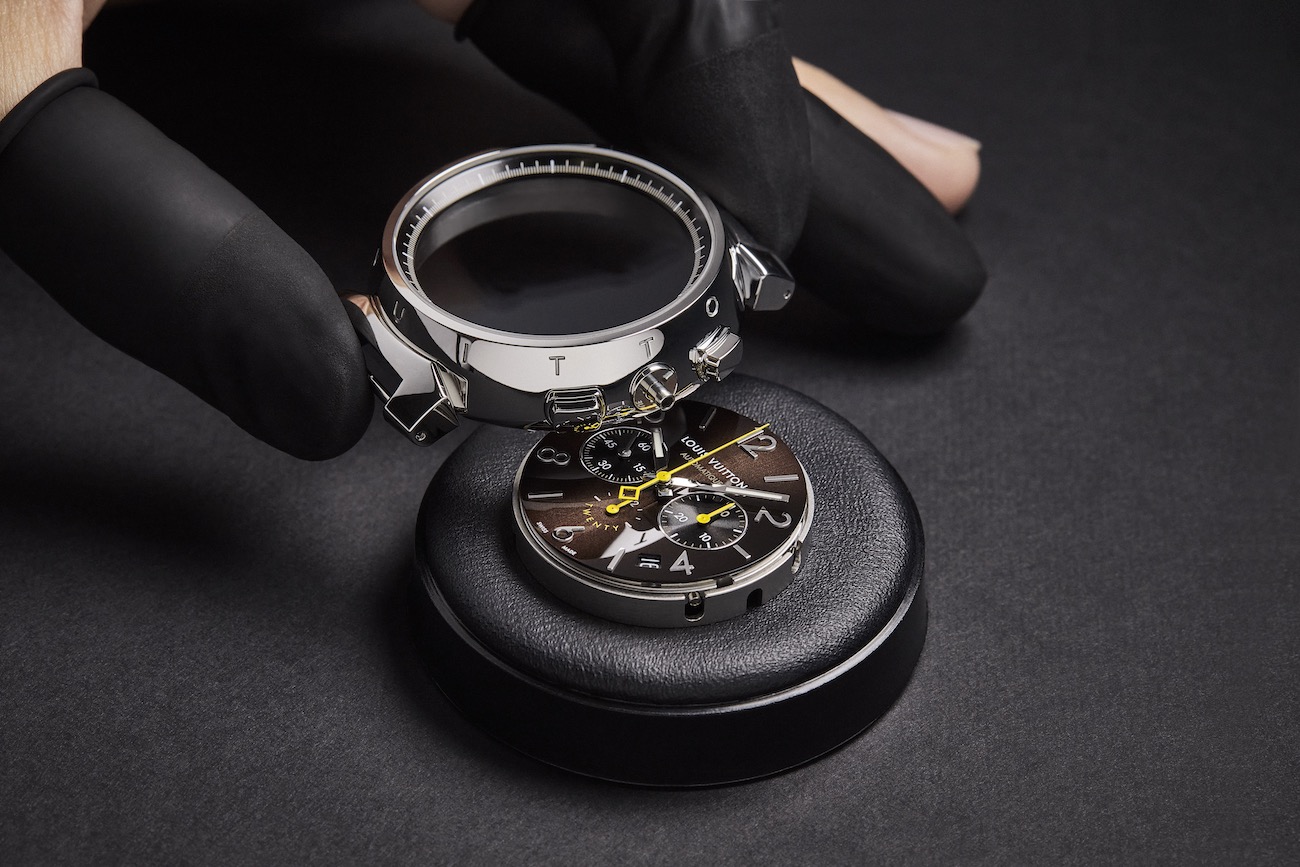 Louis Vuitton has utilized its Tambour case as a base for various models during the past two decades. Most Louis Vuitton sports watches were built within the Tambour case, notably the many nautically themed models that were made to accompany the Louis Vuitton Cup yacht races.

In a more complicated realm, you might also recall the Tambour Spin Time (2009) which displayed time using rotating cubes instead of clock hands and indexes, or the Tambour Mystérieuse (2010), the result of La Fabrique du Temps and Renaud et Papi teaming to devise a full ‘floating’ movement with no apparent links to the case or winder.

Since then, the watchmaker has continued to offer an impressive series of creative and often very complicated timepieces, most of which are fit within a Tambour case. Even Louis Vuitton’s acclaimed entry into the smart watch market, the Tambour Horizon Light Up, is built within a Tambour frame.

The Tambour case, however, has not remained static throughout its tenure. In 2014, Louis Vuitton launched the Tambour Evolution with a more traditional 45mm round case. Two years later a thin Tambour case framed the Tambour Slim, which also featured the watchmaker’s first watch with an in-house tourbillon.

In what was perhaps the most unusual iteration of the Tambour shape, Louis Vuitton’s Tambour Moon (2017) retained the signature Tambour round case but reversed its arc. The new concave case essentially created a second Tambour shape, which Louis Vuitton capitalized on in 2020 with the Tambour Curve. That watch features a titanium and carbon case that Louis Vuitton then fit with a phenomenal Geneva-Seal-certified flying tourbillon caliber.

Louis Vuitton offers the Tambour Twenty as a limited edition of 200 watches, each priced at $17,800. 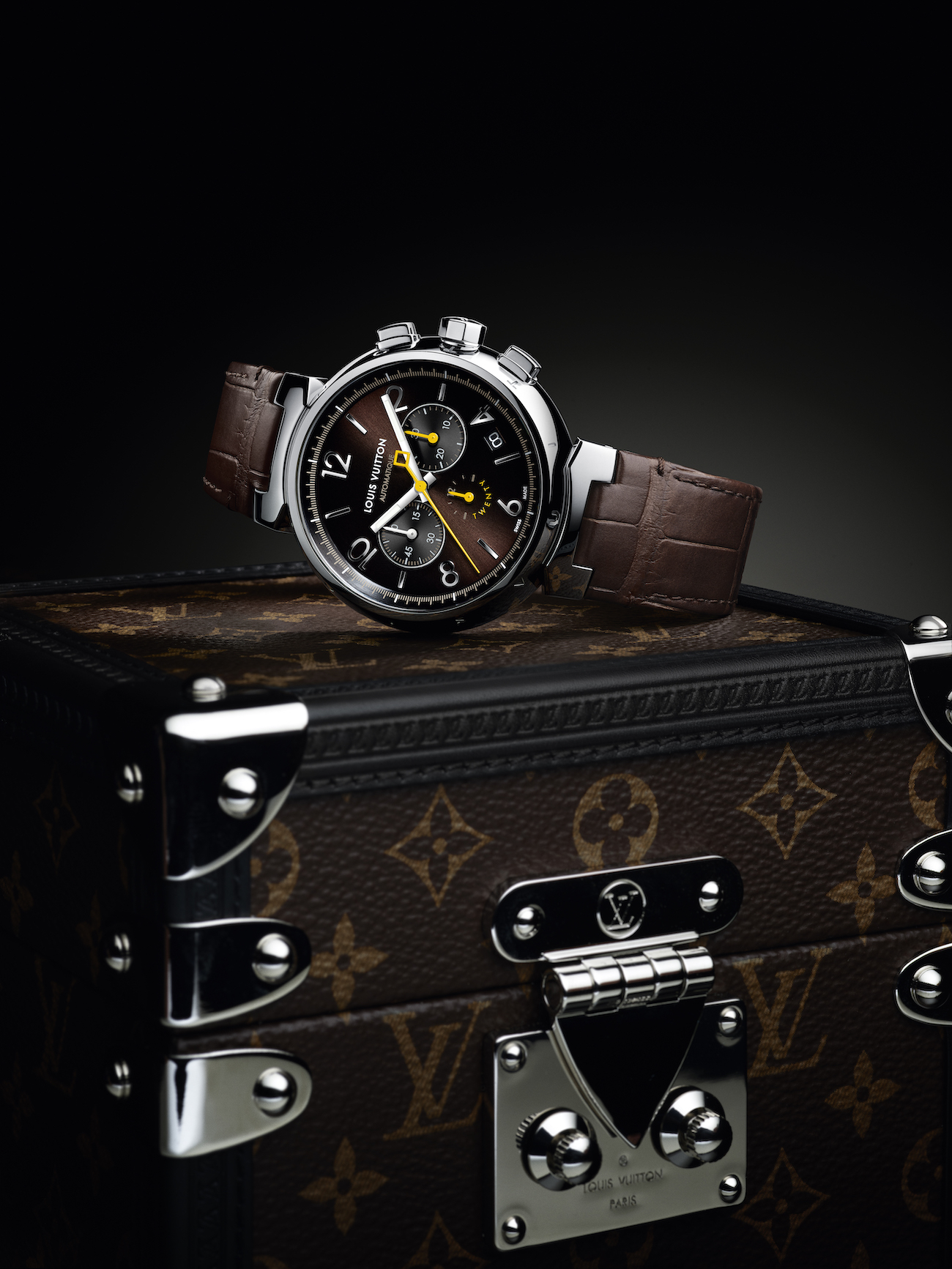 What level of watch manufacturing is being done at La Fabrique Du Temps?

Louis Vuitton purchased La Fabrique du Temps in 2011, and now we are in Geneva in the cradle of watchmaking. We have all the tools and skills to create magnificent pieces. From amazing, complicated watches to simple watches.

We have watchmakers, enamelers and most recently enamelers for dials. As you may know LVMH and Louis Vuitton both love artisans. So many other brands don’t have this kind of operation.

We are a company of 125 people, we have twenty watchmakers, eight engineers, four casing engineers, two designers and ten dial makers. We have a workshop for electroplating so we can make rose gold, yellow gold, rhodium.

Do you also do work for outside brands?

We cannot. We work strictly with Louis Vuitton and we certainly have plenty of work to do. Within the LVMH group we also have TAG Heuer, Hublot and Zenith and sometimes we will meet. But we concentrate our spirit and our minds on Louis Vuitton. 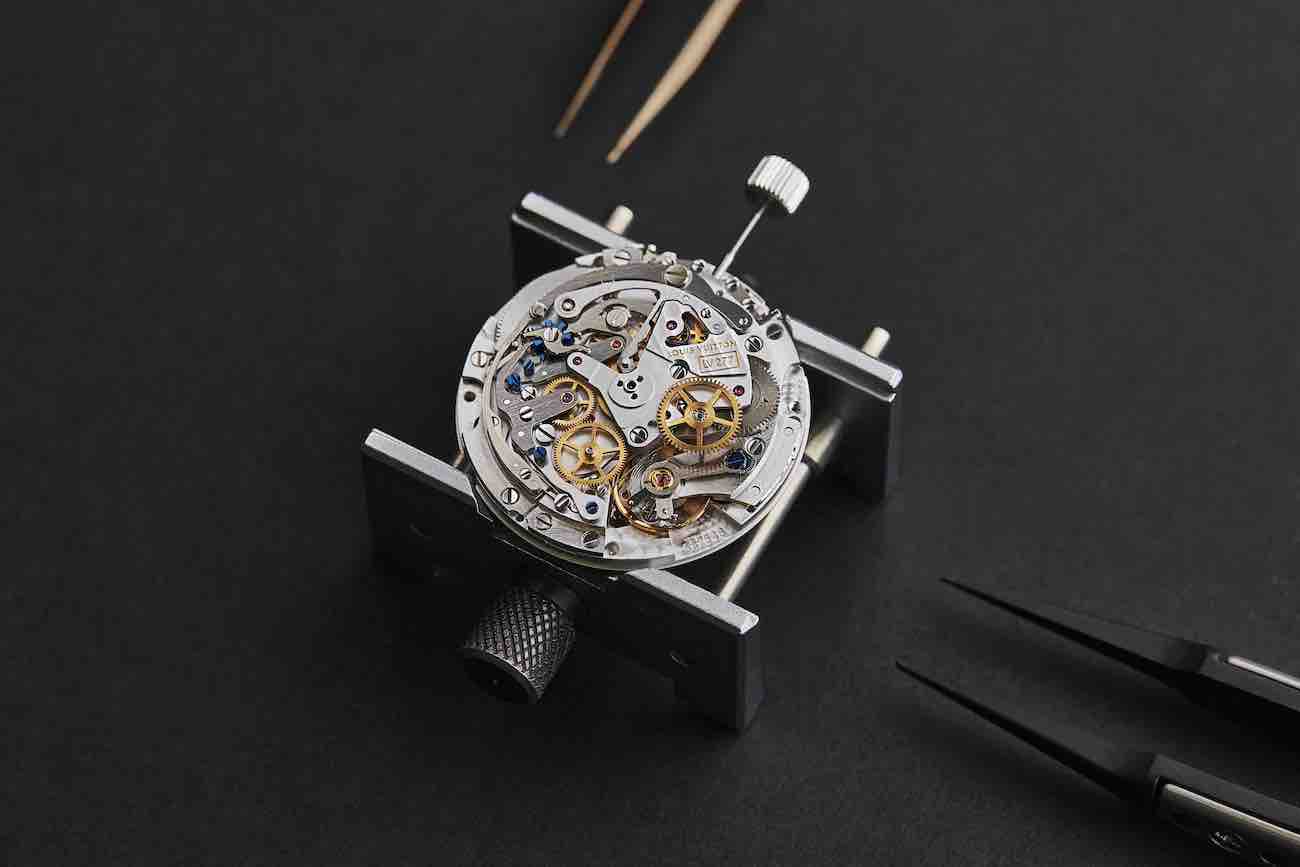 What are some recent additions to the factory?

We recently worked with in enameler Anita Porchet. And if there are some other artisans that we need we will try to add them to our capabilities. Very soon we will add an expert engraver in the house.

One of the reasons we are in Geneva is to obtain the Geneva Seal. We received that Seal in 2016 and we are very proud of it. It is difficult to obtain and it is difficult to keep. And we have to finish all of our components by hands, even the screws. Everything must be polished, angled and finished by hand. In addition, each watch has to go to the Geneva Seal offices for two weeks. 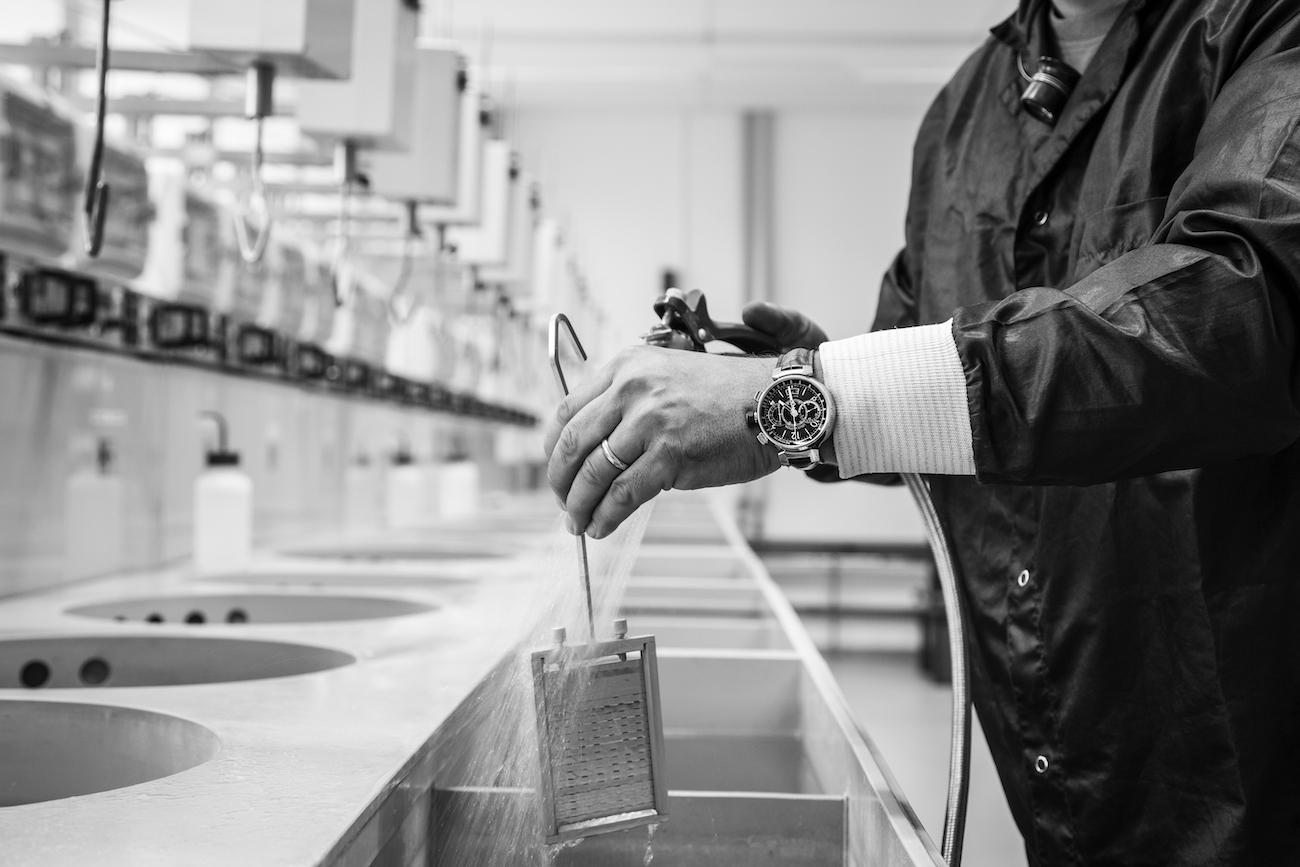 Do you see expanding other collections beyond Tambour?

Now we celebrate the twentieth anniversary of our Tambour watch, but we do have the Voyager collection, the Escale, and various Tambour variations. Tambour is our iconic case, it is pure and elegant. It looks simple, like a drum, but it is quite complicated. The shape is a perfect ambassador for Louis Vuitton.

My first project with Louis Vuitton was with the Spin Time. When we finished the first prototype, we realized again the importance of the Tambour case shape. The three dimensional Spin Time fits perfectly with the Tambour shape. And today we have different models of the Spin Time, including with the Escale shape case. 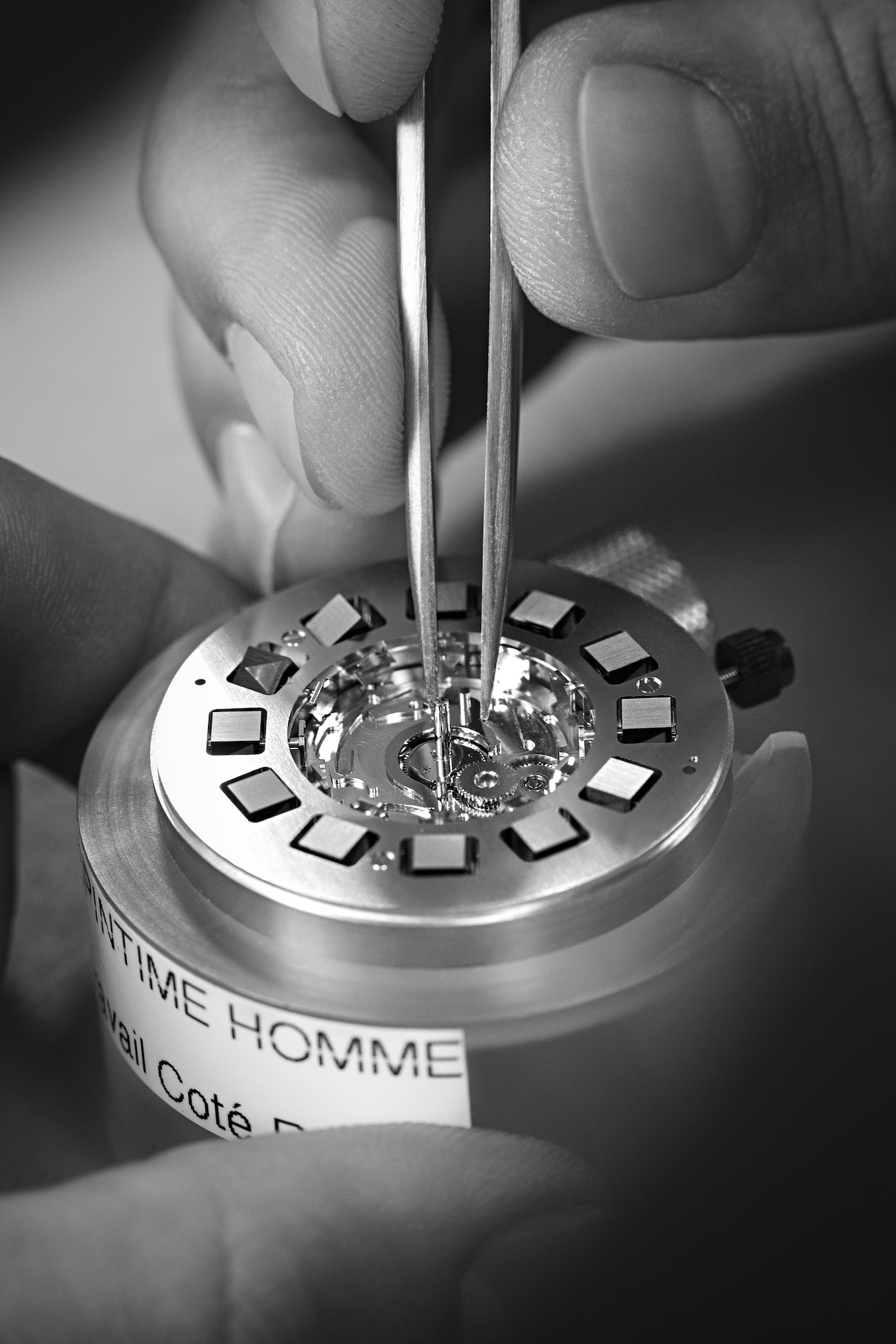 We try to offer our clients a different type of watchmaking that includes the best traditions inside the watch but also has the Louis Vuitton touch on the outside.

For me the Tambour case shape is the Louis Vuitton archetype. It will always remain in our collection.

Will you re-create the original Monterey case from Louis Vuitton?

I love this case. I like how it is smooth on the wrist so maybe I will speak to my designer about that.

What would you like our readers to know about Louis Vuitton watches?

Louis Vuitton is quality and craftsmanship, audacity and high quality, and you cannot find this combination elsewhere. For example when we developed the minute repeater in our Tambour case, this was a premiere because you have a second time zone, just managed by the crown, which you put in the second position. Our World Time is a world time watch without hands, and in the Spin Time, showing the time using cubes is also a world premiere.

Are you already planning for the next anniversary?