We know Jeff Stein as a leading collector of vintage Heuer chronographs, who occasionally dabbles in the newer TAG Heuer models.  It caught our eye when, twelve hours after he received his Fragment Design Heuer 02 chronograph in July, Jeff posted on Instagram that this watch was his “favorite TAG Heuer chronograph, ever . . . and even though you won’t see the name on the watch, the best looking Autavia-inspired chronograph, ever.”

Below,  Jeff tells us more about his infatuation with this very interesting watch.

Can you give us the “elevator version” of the Fragment Design Heuer 02 chronograph?

The watch was designed by Hiroshi Fujiwara, a god in the world of streetwear and the creator of Fragment Design. Fujiwara has designed all sorts of interesting things such as guitars for Eric Clapton, sneakers for Nike and Converse, and headphones for Beats. In the watch world, he has designed watches for Rolex and Zenith, as well as a Carrera for TAG Heuer, in November 2018.

On the Heuer 02 chronograph, Fujiwara incorporated the design language of a 1970s Heuer Autavia into a TAG Heuer Formula 1 chronograph case, with the watch powered by the Heuer 02 movement.

Why has the Fragment Design Formula 1 chronograph been controversial among the vintage Heuer enthusiasts?

Much of the controversy probably arises from the fact that the watch was inspired by the 1970s Autavias, but resides in the modern case that TAG Heuer uses for its Formula 1 chronographs.  There is no model name on the dial, neither “Autavia” nor “Formula 1,” so some traditionalists might see the watch as something of a Franken, which may be lacking the pure pedigree of either model.

So how do you come to terms with these issues?

For years, I have listened to the debates about what is and is not properly identified as an Autavia, a Carrera or a Formula 1.  Some traditionalists say that an Autavia has to be a chronograph, rather than a three-handed watch, or that a Carrera cannot have an outer bezel, because these were the rules when the models were launched in the 1960s.

I have pretty well gotten over these hard-and-fast rules.  If Jack Heuer had felt constrained by such rules in the 1960s, the Autavia would have never made it from a dashboard timer to a chronograph and we might never have seen Heuer’s automatic chronographs.  Right now, I am more impressed with a brand making great looking, high quality watches and less concerned about the model name on the dial.

Perhaps there is no requirement for watch models to be binary, so that the brands can incorporate elements of one model into another one.  We saw this recently when TAG Heuer incorporated the colors and style of the 1970s Montreal chronograph into a 1960s-based Carrera, and people liked the result.

As a physical object, what are your favorite elements of the Fragment Formula 1 chronograph?

I am a big fan of minimalist design, in general, and like the matte black and charcoal gray tones.  This is a great look in cars and Fujiwara has followed a similar approach with the new Formula 1, using a matte black dial.

The hands and bezel are taken directly from the 1970s Autavias, but Fujiwara has deleted the elements that made those watches busier — the contrasting white registers, the concentric ridges in the registers and the frame around the date window.

This is like deleting the chrome on a blacked-out car, and it makes the expanses of black more dramatic.  The red and white accents on the dial are the final touches that give the watch its pop. For several years, the Formula 1 chronographs have been housed in a case with geometry that is very close to the c-shape cases of the 1970s Autavias, so this Autavia color scheme from the 1970s looks right in the Formula 1 case. 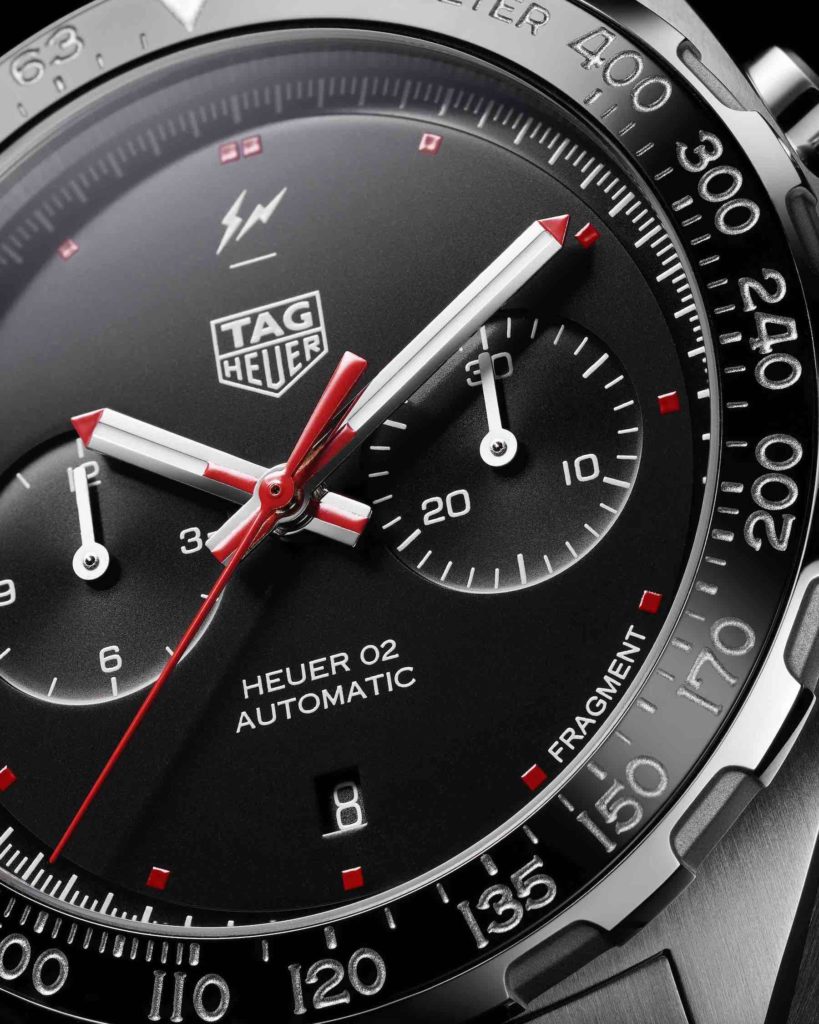 And what are the intangibles that you enjoy with the new Fragment Design Formula 1 chronograph?

The Autavias of the 1960s and 1970s were the chronographs worn by the top drivers in motorsports.  We see them on the wrists of Mario Andretti, Jo Siffert, Graham Hill, Derek Bell and many other racers.  Beyond the top professionals, Autavias were popular among the amateurs and club racers, particularly with the Viceroy promotion, which offered a $200 Autavia for $88 with proof of purchase of ten packs of Viceroy cigarettes.

The tachymeter bezel is the symbol of a racing watch, whether on the Autavia, or the Rolex Daytona or the Omega Speedmaster.  TAG Heuer is positioning the Formula 1 collection as the brand’s racing watches, and there is no better flagship for that collection than a watch that incorporates the design elements of the Autavia, the ultimate racing watch of the 1960s and 1970s.

People in the watch world may think of the Formula 1 as TAG Heuer’s “entry level” model.  How do you reconcile that with the $6,150 price tag on this model?

Essentially, this watch, and a couple of other Formula 1 models recently released by TAG Heuer, serve as a clear statement that the TAG Heuer collections will no longer follow a price hierarchy.  There is no entry-level collection or high-end collection.  Instead, the collections are defined by their aesthetics and purposes.

The Formula 1 is TAG Heuer’s racing watch and the Autavia will be positioned as the watch for adventure.  To me, this is a much more sensible way to position the collections than just based on their price ranges.  TAG Heuer now offers its in-house Heuer 02 movement in four of its six collections, confirming that no model is relegated to “entry-level” status.

How do you compare the new Fragment Formula 1 with the other Autavias that have been re-issued by TAG Heuer?

With the arrival of this Fragment Design chronograph, there are basically three series of Autavia re-issues.

In 2003, TAG Heuer offered two versions of a cushion-cased Autavia, one with the black / orange colors and the other with the white / black / blue Siffert colors.

In 2017, TAG Heuer offered a new Autavia, modeled after the Rindt model from the late 1960s.  After the initial model with the black dial and white registers, we have seen several limited editions, incorporating other color schemes into this same case.

Every collector will have their own favorite, but to my eye, the Fragment Formula 1 captures the spirit of the 1970s Autavias, with the color scheme, the hands and bezel, and the case geometry. There’s no “Autavia” on the dial, but there’s no doubt about the origins of this watch. 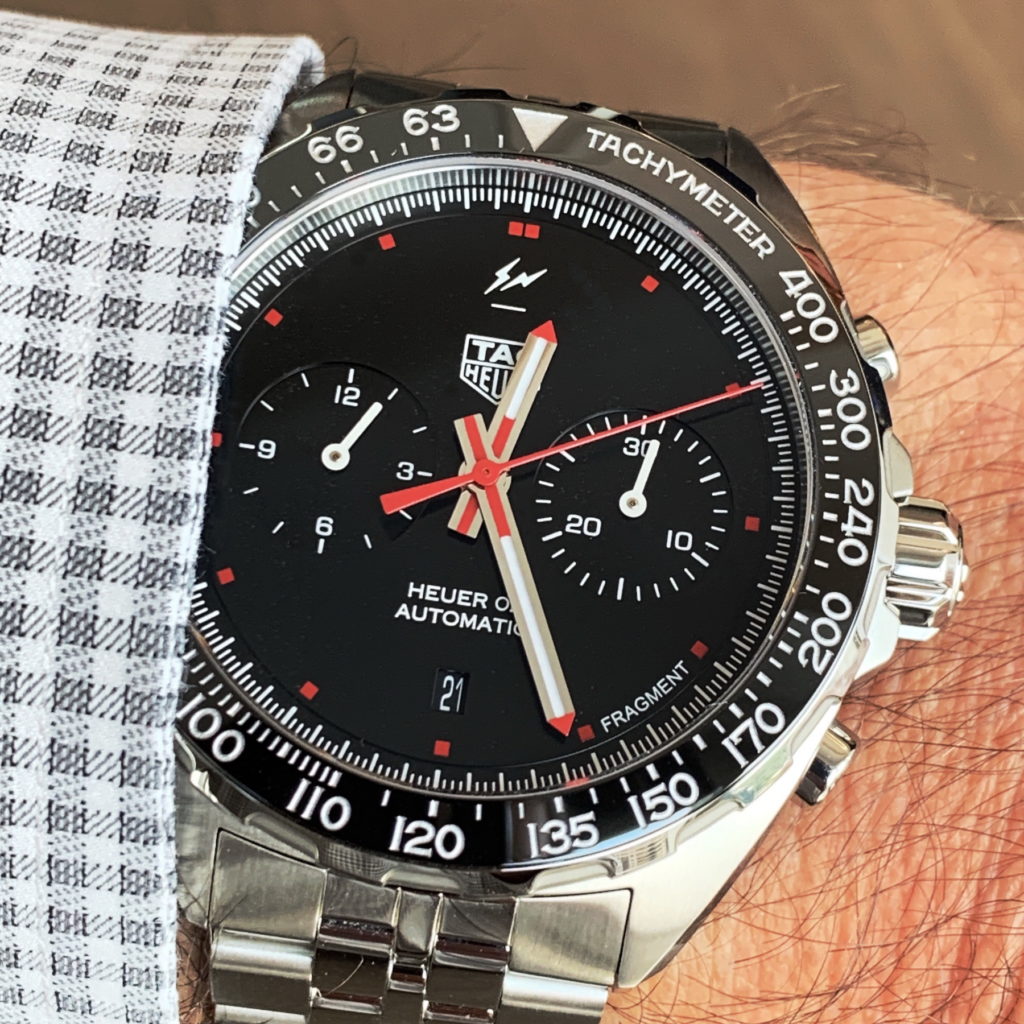 How is the watch on your wrist?

It’s a big watch at 44 millimeters, and I have a small wrist, but it’s a great fit.  The more important measurement might be the thickness, and TAG Heuer has shaved the case to 14.4 millimeters.  That’s not exactly thin, but it makes the 44 millimeter case very wearable.  The bracelet is entirely new, and is relatively thin with a butterfly clasp, which also makes the watch wear smaller.

Why does this watch have the TAG Heuer logo on the dial rather than the Heuer shield?

I believe that TAG Heuer is reserving the “Heuer” shield for re-issues of the heritage models, like the Carrera 160 Years models that we saw earlier in the year.  This Formula 1 is not a re-issue of a heritage model, but a new creation for TAG Heuer.  So it gets the TAG Heuer shield rather than the Heuer shield. 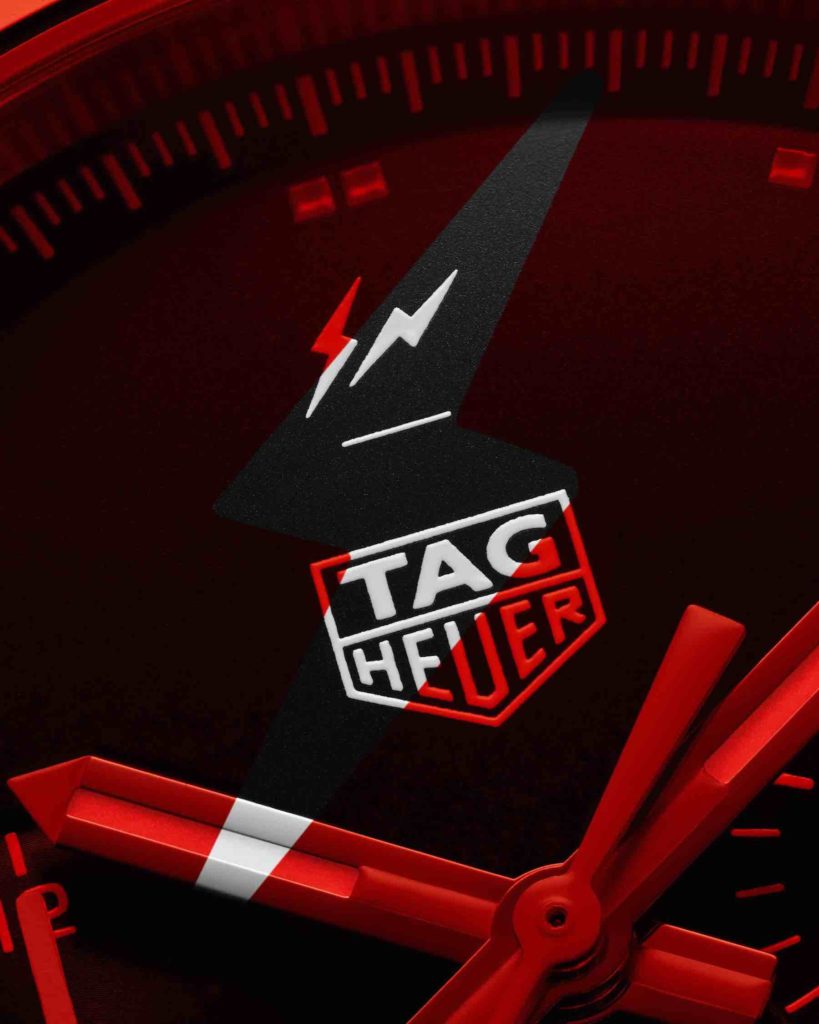 What are your personal preferences, as far as the re-issues that so many brands seem to be offering in the year 2020?

In recent years, there has probably been more hand-to-hand combat in the vintage community on the subject of re-issues, re-editions, homages, tributes and the like than on any other single topic.  We see everything from one-to-one recreations of some of the classics, like Breitling and Omega have done with great success, to watches that carry the name, but bear no resemblance to the original models.

I really like the approach of the two Fragment Design models: take an iconic model, boil it down to find the essence of the design, then punch up the elements that provide the style and feel of the original period.

On the Fragment Carrera, we see the power of the oversized registers; on the Fragment Formula 1, we see the dramatic black paint and the red accents, with the distinctive hands and bezel.  These elements defined the racers chronograph in 1970 and, fifty years later they continue to capture the excitement of racing.  To me, capturing this timelessness is the ultimate success of a re-edition. 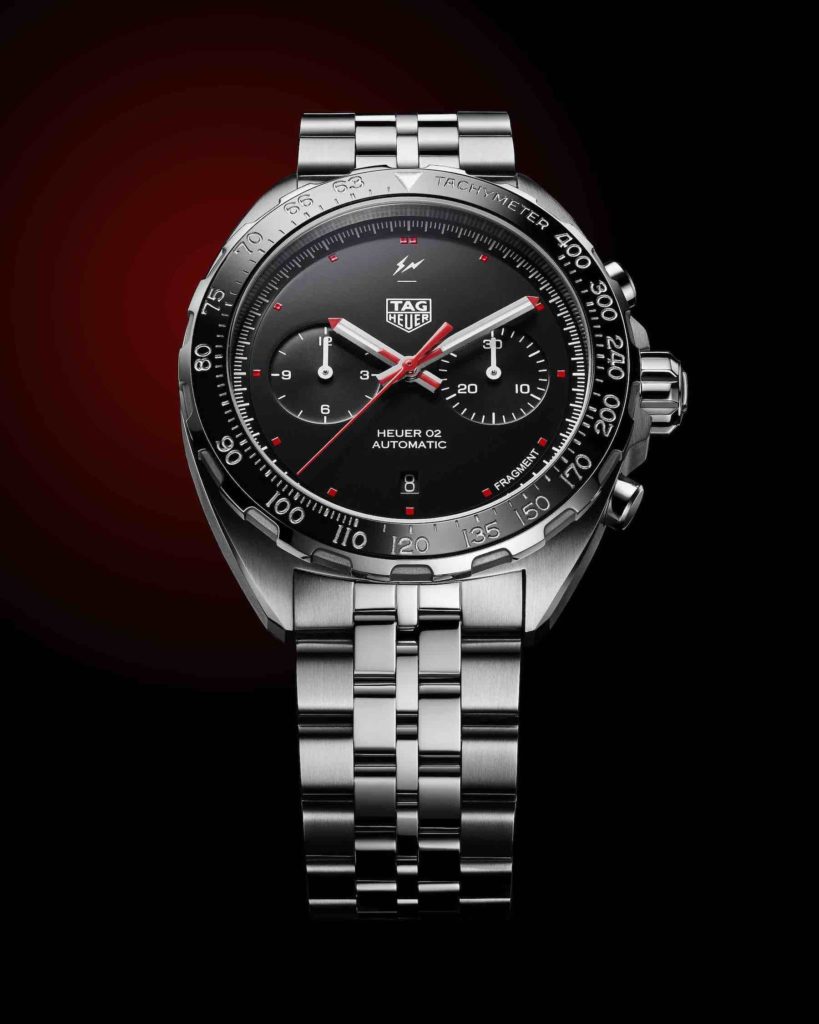 Other than the Fragment Design models, which are your favorite of TAG Heuer’s heritage-inspired models?

The Skipper captured the colors and spirit of one of the Heuer grails, the original Skipper from 1967, but took some liberties (for example, having a 30-minute register rather than the 15-minute count-down register).

The Carrera Montreal took even more liberties, incorporating the colors and vibe of a wild-looking 1972 Montreal chronograph into a Carrera case. Once again, the traditionalists may frown, but if you like the look of these watches and enjoy the connection with the Heuer heritage, these are fun watches.

If you could only have one of the Fragment models, the Carrera or the Formula 1, which would it be?

My first instinct is to dodge the question. The same way that the 1960s Carreras were different from the 1970s Autavias, the choice between the two Fragment models comes down to a matter of the mood and look that you want on a given day.

The quiet elegance of the Carrera is very different from the loud excitement of the 1970s Autavias.  Looking at my collection of vintage Heuers, I probably have four times as many 1970s Autavias as 1960s Carreras, so the Fragment probably gets the nod.

If there will be a third Fragment Design chronograph for TAG Heuer, what are you hoping for?

Fujiwara has done a Carrera and an Autavia, so his third model will have to be a Monaco.  It would be fantastic to see what he would do with the extra-large canvas of the Monaco.