The new models add two new case sizes to the collection with two 32mm models and two 28mm models. Both are offered in sterling silver or rose gold cases. The collection had previously only offered 35mm square-cased steel models. 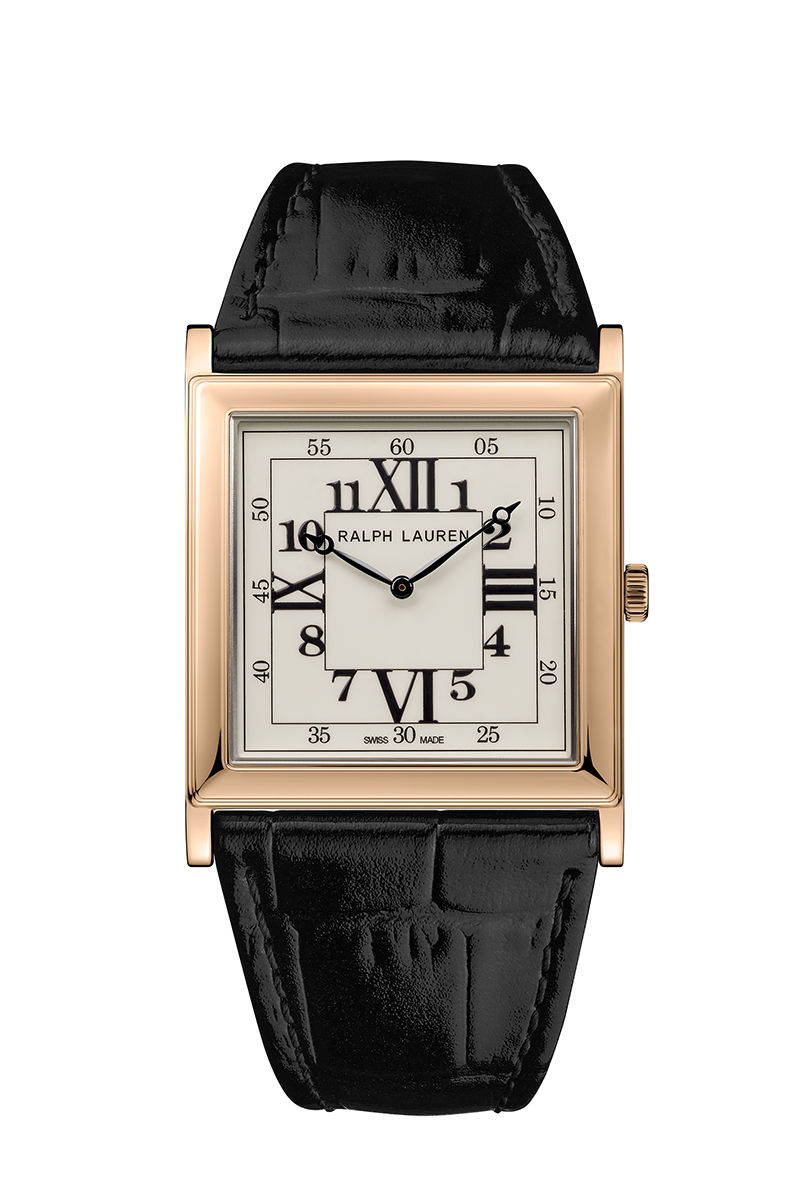 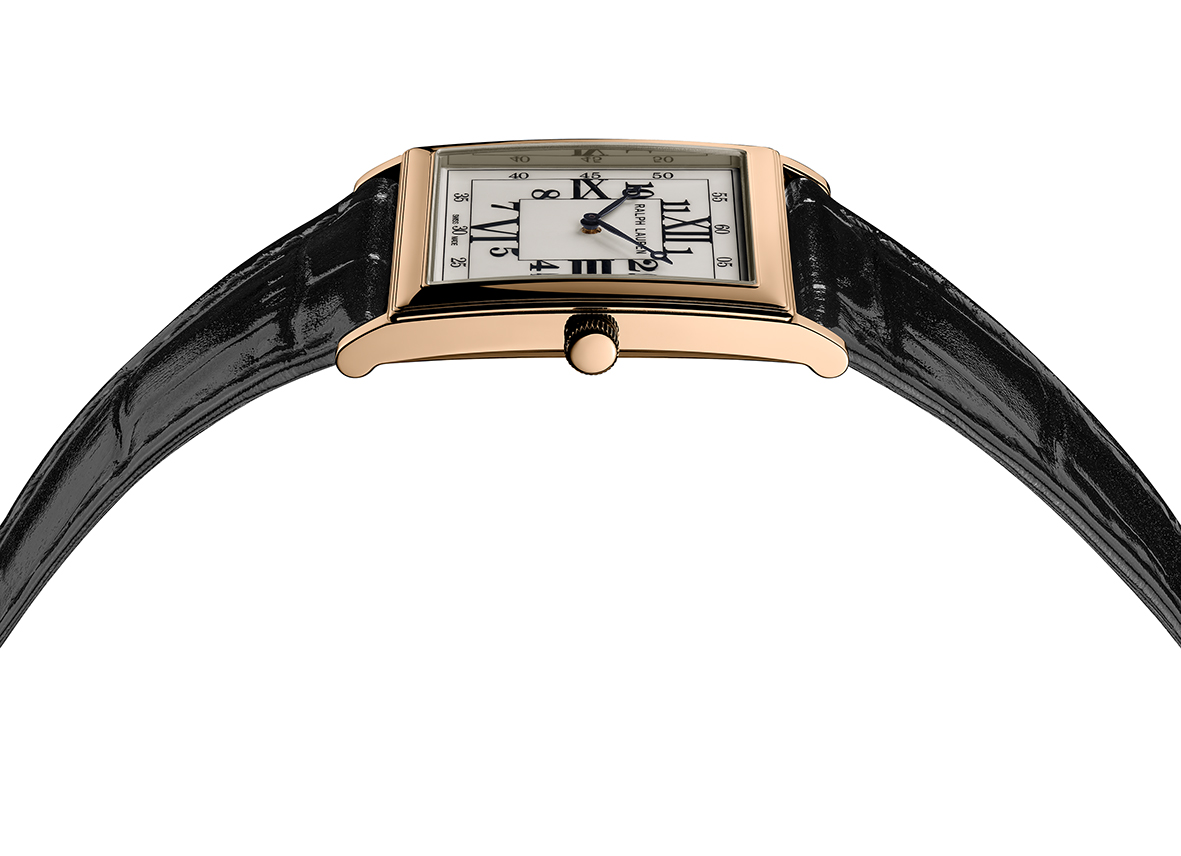 All the new models are powered by an extra-flat mechanical manual winding Swiss movement made for Ralph Lauren by Piaget and based on the watchmaker’s legendary Caliber 430. The movements are hand finished with vertical Côtes de Genève stripes and circular graining (perlage). 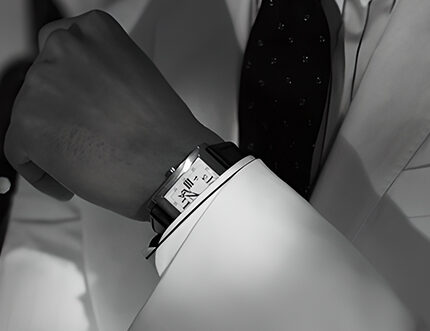 You may recall that a year ago the luxury watchmaker celebrated its twenty-fifth anniversary with the release of the La Rose Carrée pocket watch, a unique minute repeater based on a Louis-Elysée Piguet caliber that had been restored in Parmigiani Fleurier’s workshops. 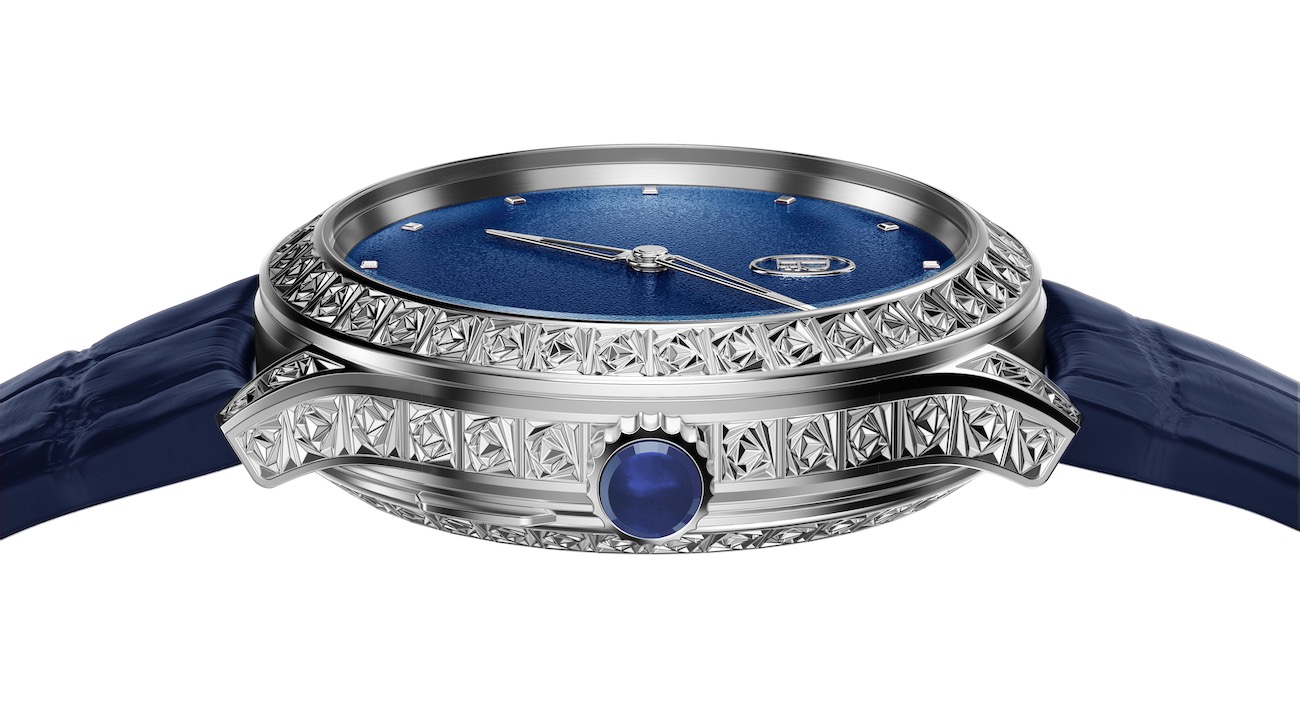 The new Rosa Celeste offers a 42mm white gold case that is hand-engraved with the same motif found on the 2021 pocket watch, and also includes a hunter’s caseback. The  back and the chiseled dial of the new watch are finished with richly detailed blue grand feu enamel, a painstaking artisanal process that requires multiple high-temperature firings.

For the repeater, Parmigiani Fleurier chose to create cathedral gongs. Here, the chime has been optimized by a suspended movement and with the heel of the gongs physically connected to the case. In addition, watchmakers have redesigned the case to create resonance pockets and to lighten the white gold mass.

Unusually, Parmigiani Fleurier watchmakers have also devised a ringing sequence automatically skips dead time. For example, at 3:19, the three chimes for the hour are immediately followed by a double chime for the quarter-hour and again, without silence, by up to four chimes for the minute. 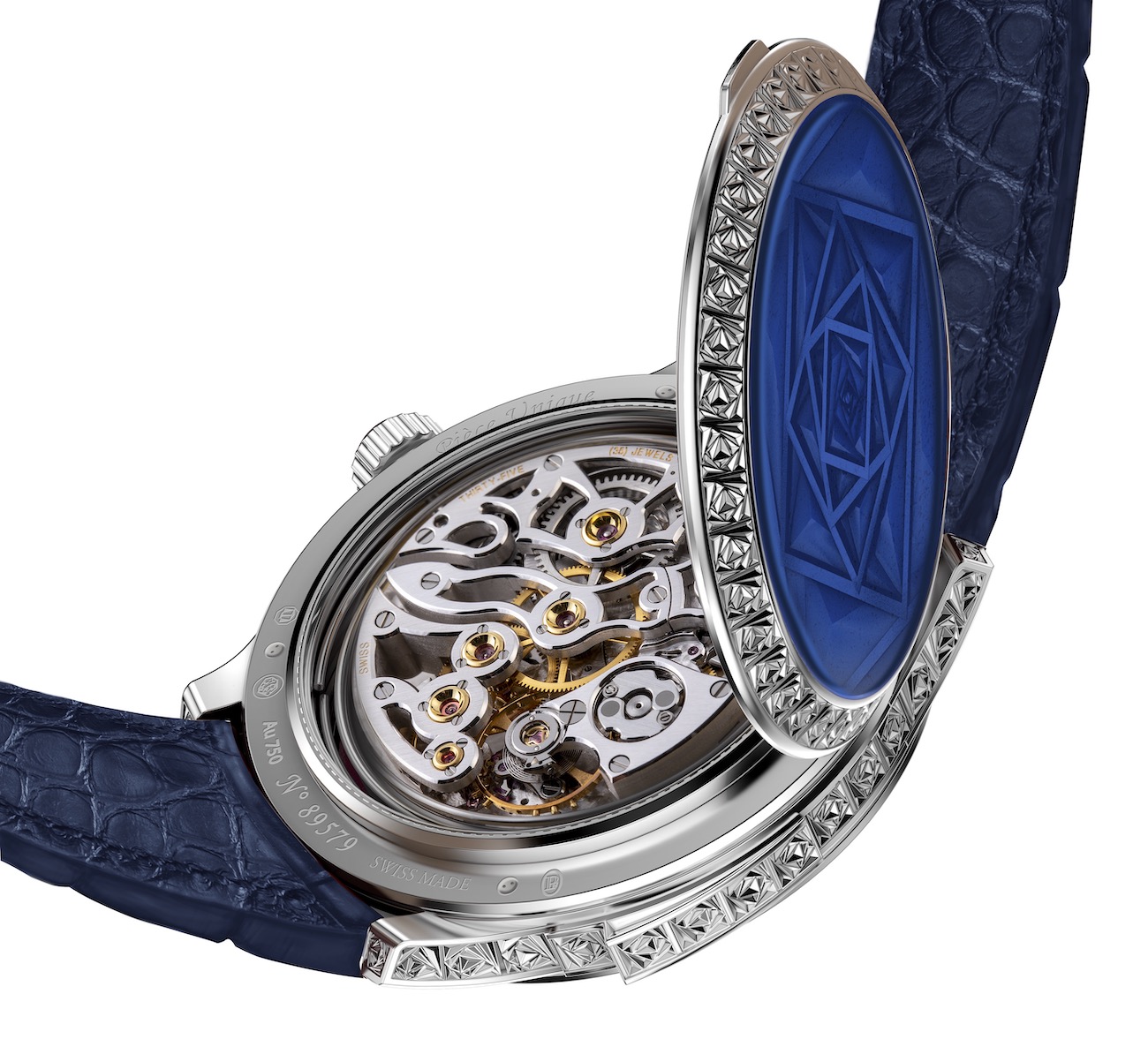 New York-based Massena LAB has teamed with independent Swiss watchmaker Raúl Pagès to develop its first proprietary movement, the M660, which will be placed into a new limited edition watch called the Magraph.

The Bauhaus-inspired manual-wind watch features a geometric-patterned, off-white dial with bright blued hour, minute and seconds hands. Massena LAB frames the dial with a 38.5mm stainless steel case made to echo designs from the 1940s and 1950s. 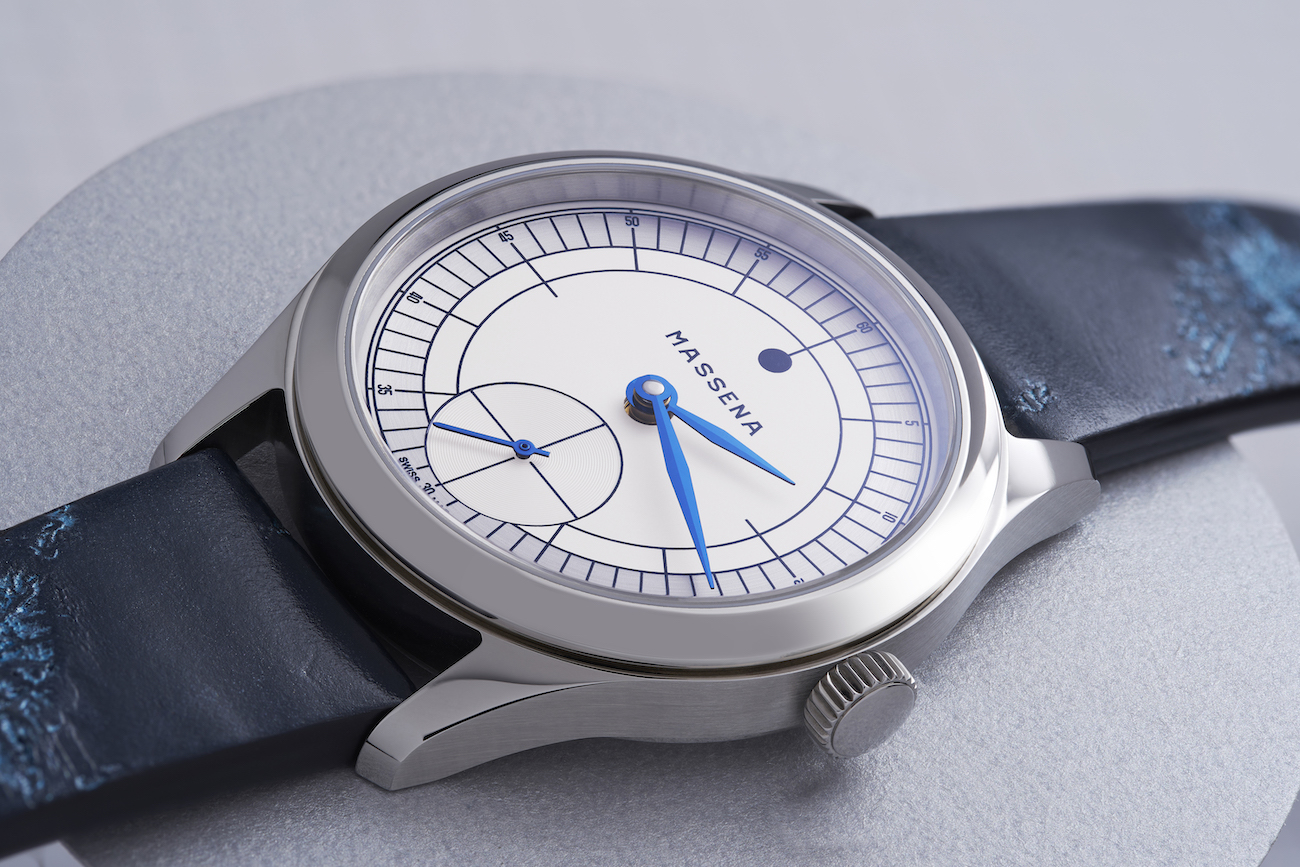 The M660 movement is a manual-winding 4Hz movement with a power reserve of 48 hours. 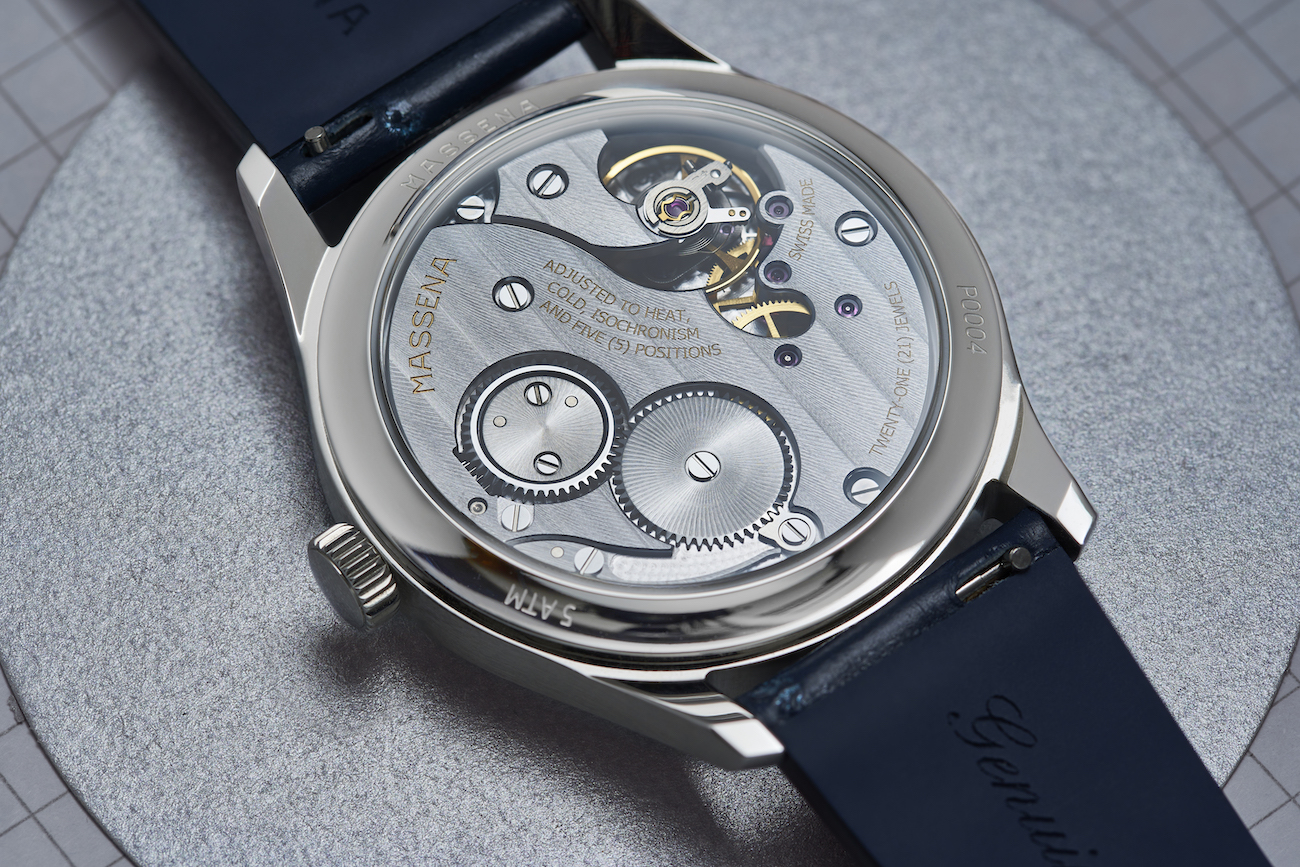 Pagès has finished the caliber with Côtes de Genève finishing and hand-chamfered plates and bridges, all of which are visible through its sapphire caseback. 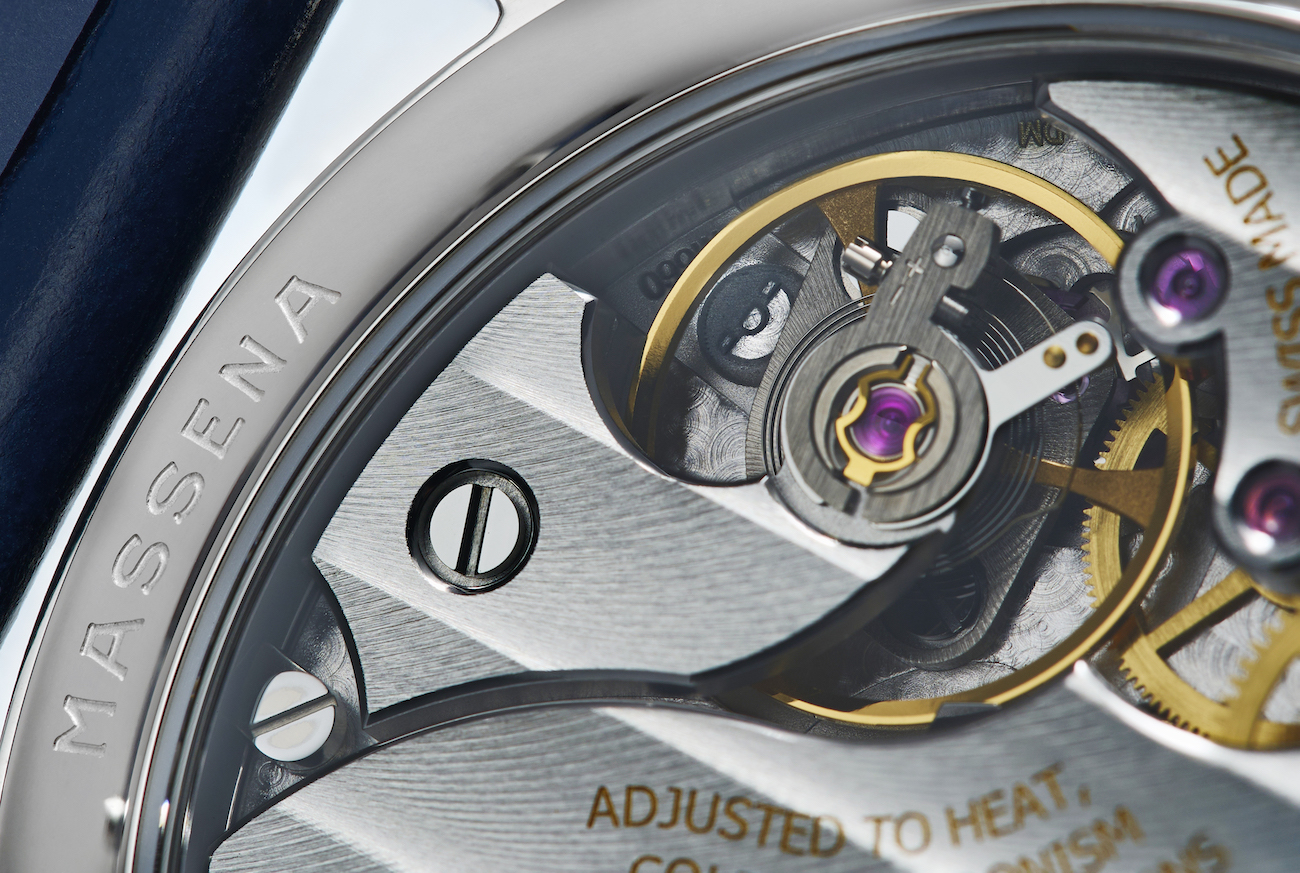 The watchmaker has hidden his signature flourish, a silhouette of a tortoise, under the balance wheel. 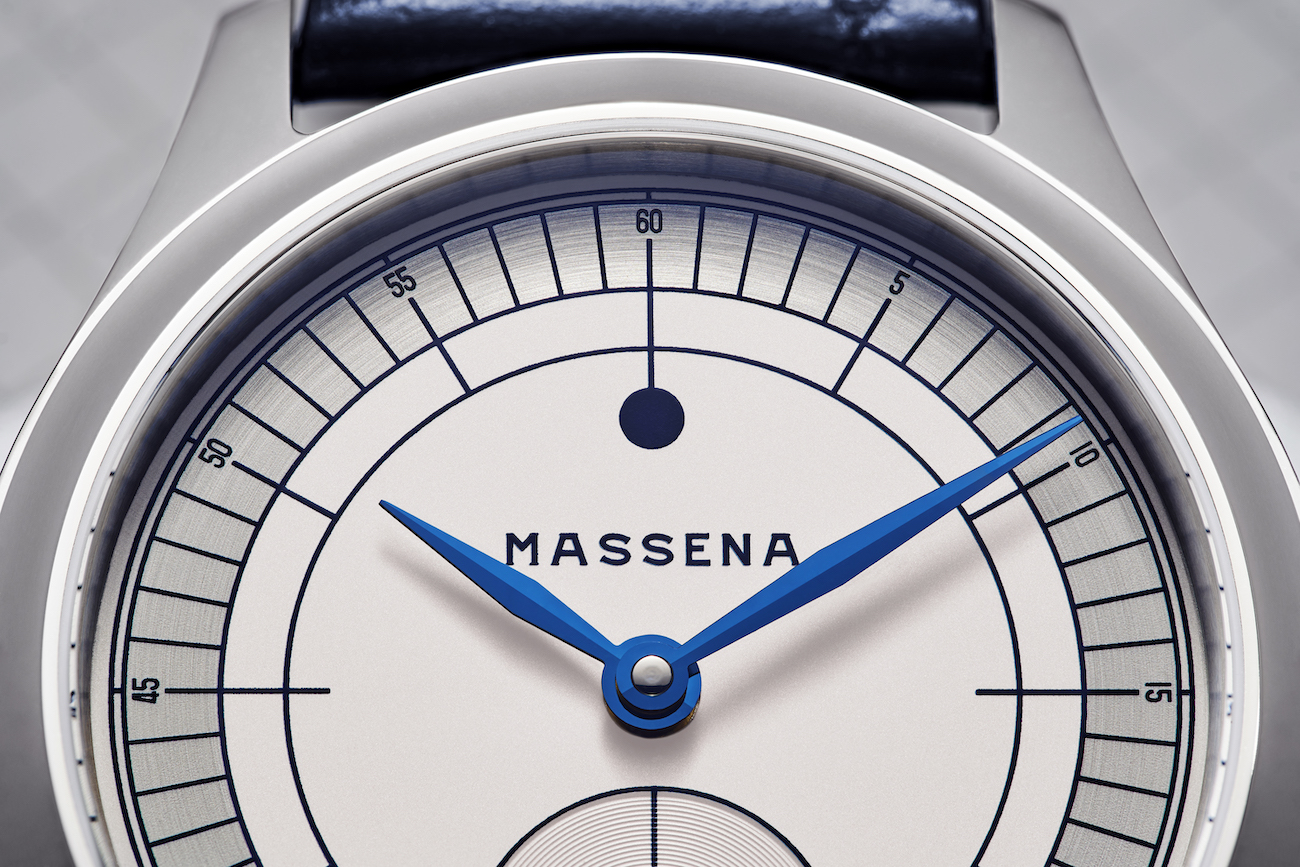 Massena LAB, founded by collector and watch expert William Massena, has attached a special strap to each Magraph. The deep indigo strap is made from sustainably-sourced sturgeon skin and features eye-catching iridescent turquoise accents, designed exclusively for Massena LAB by Jean Rousseau Paris. 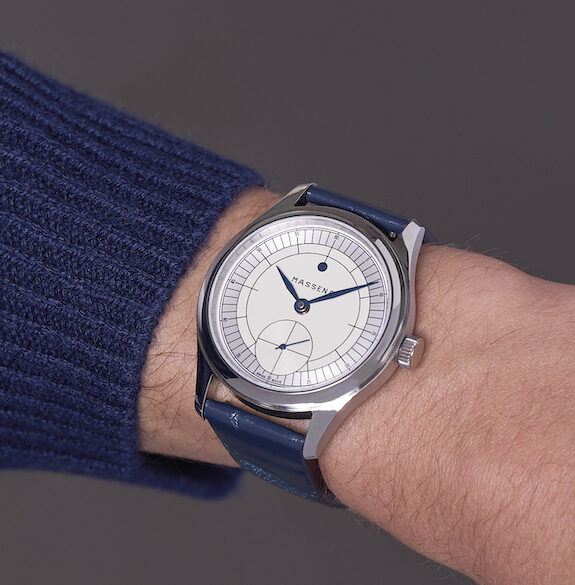 Delivery of the Magraph will be on a first-come, first-served basis, starting in December 2022. Massena LAB will produce approximately fifteen to twenty watches produced per month. Each will include a two-year guarantee, box, deerskin travel pouch, papers, and a Massena LAB NFC card. Limited to only 99 examples, the Massena LAB and Raúl Pagès Magraph will be for sale exclusively on MassenaLAB.com.

Patek Philippe launched three variations to its hot Nautilus (including a white gold successor to its retired Ref. 5711) and extended its collection of complicated chronographs as part of an eight-piece debut this week.

While the new Nautilus debuts garnered much of the initial attention, it’s the new set of chronographs that attract collectors of Patek Philippe’s legendary (and less commodified) complications. (Read all about the trio of new Nautilus models, including the 41mm successor to the Ref. 5711 , on the Patek Philippe site.)

And among those chronograph debuts, look no further than the new Ref. 5373P-001, a split-seconds mono-pusher chronograph with perpetual calendar, for some true novelty. The watch differs from its predecessor (Ref. 5372) with newly inverted displays, pushers and crown.

Made for specifically “for the right-hand wrists of left-handers,” according to the watchmaker, the new 38.3mm platinum-cased watch is a premiere design for the company.

Patek Philippe notes however that a 1927 one-of-a-kind watch inspired the design of the new model. Like the earlier watch, the new watch features its integrated chronograph monopusher at the 9 o’clock position with the split-seconds pusher set, unusually, at 8 o’clock. 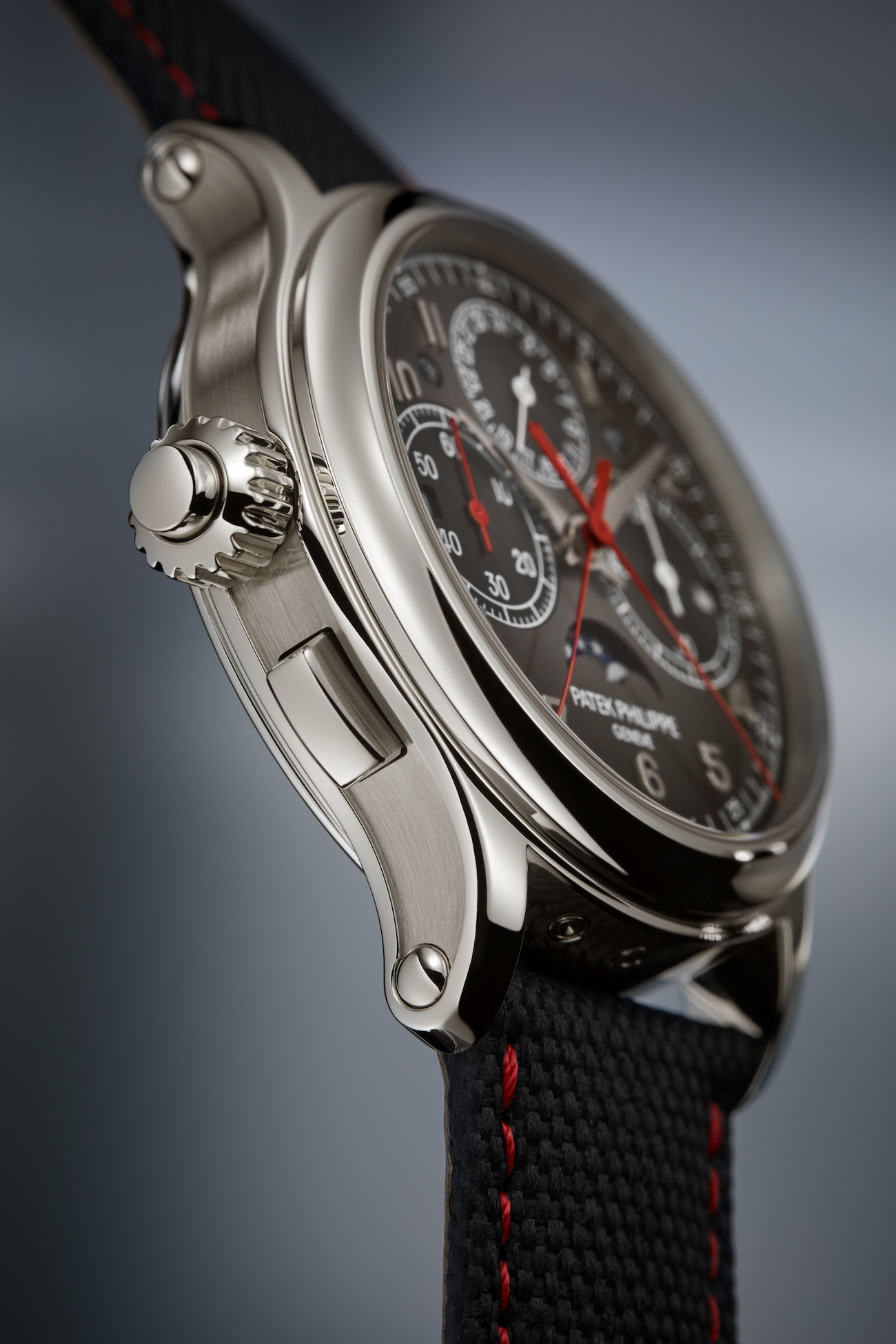 The sporty red, black  and grey dial on the Ref. 5373P-001 is cleverly finished with a black gradation at its edge, framing snailed ebony-black subsidiary dials. 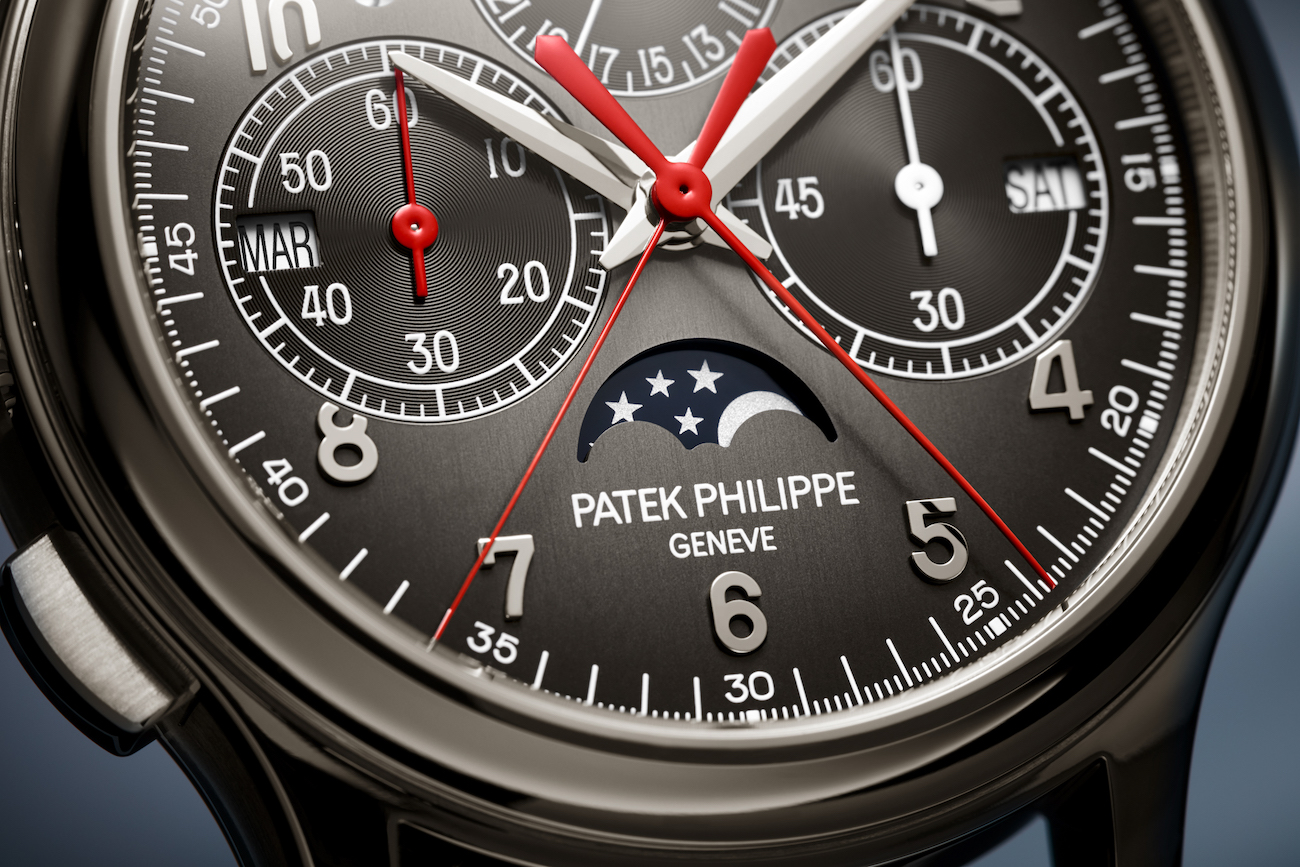 The watch’s beautifully finished caliber CHR 27-525 PS Q, still the thinnest split-seconds chronograph movement with perpetual calendar ever produced by the manufacture, can be admired through the sapphire-crystal display back, which is interchangeable with the solid-platinum back delivered with the watch. 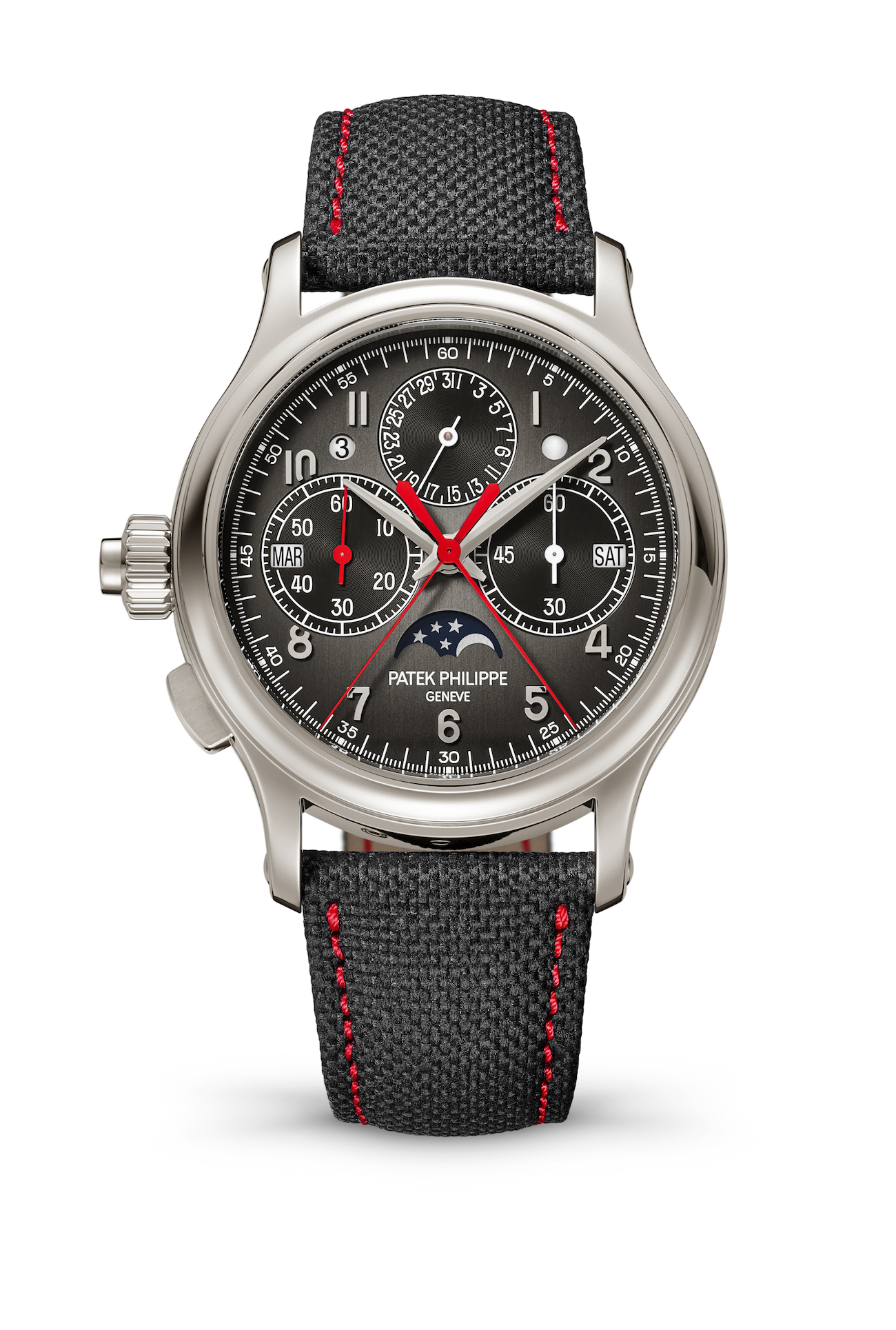 Among the many caseback highlights is a view of the movement’s two column wheels with their two polished caps. 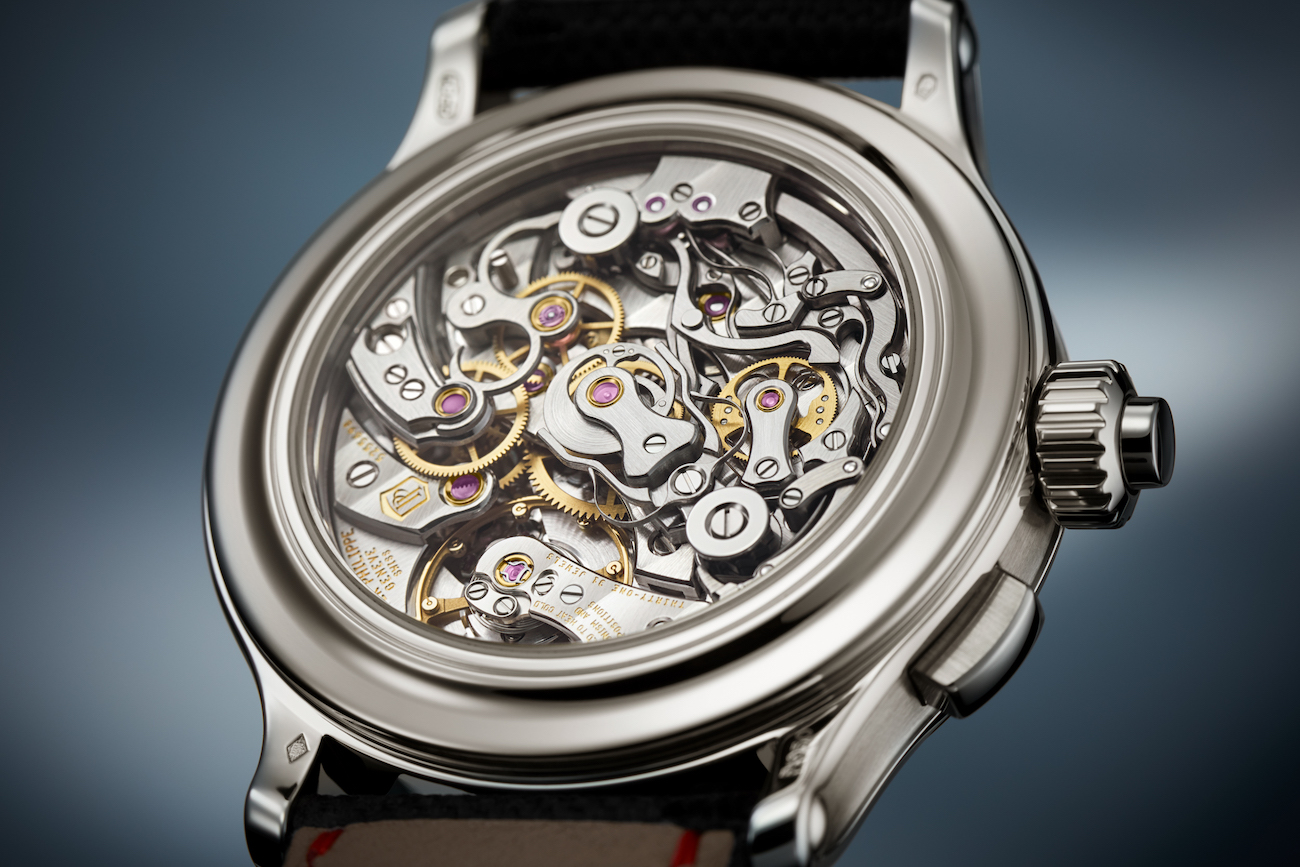 Also with a split-seconds chronograph with perpetual calendar, the new Ref. 5204G-001, with its standard, right-side crown and two pushers,  features a 40mm white gold case and an olive-green sunburst dial. 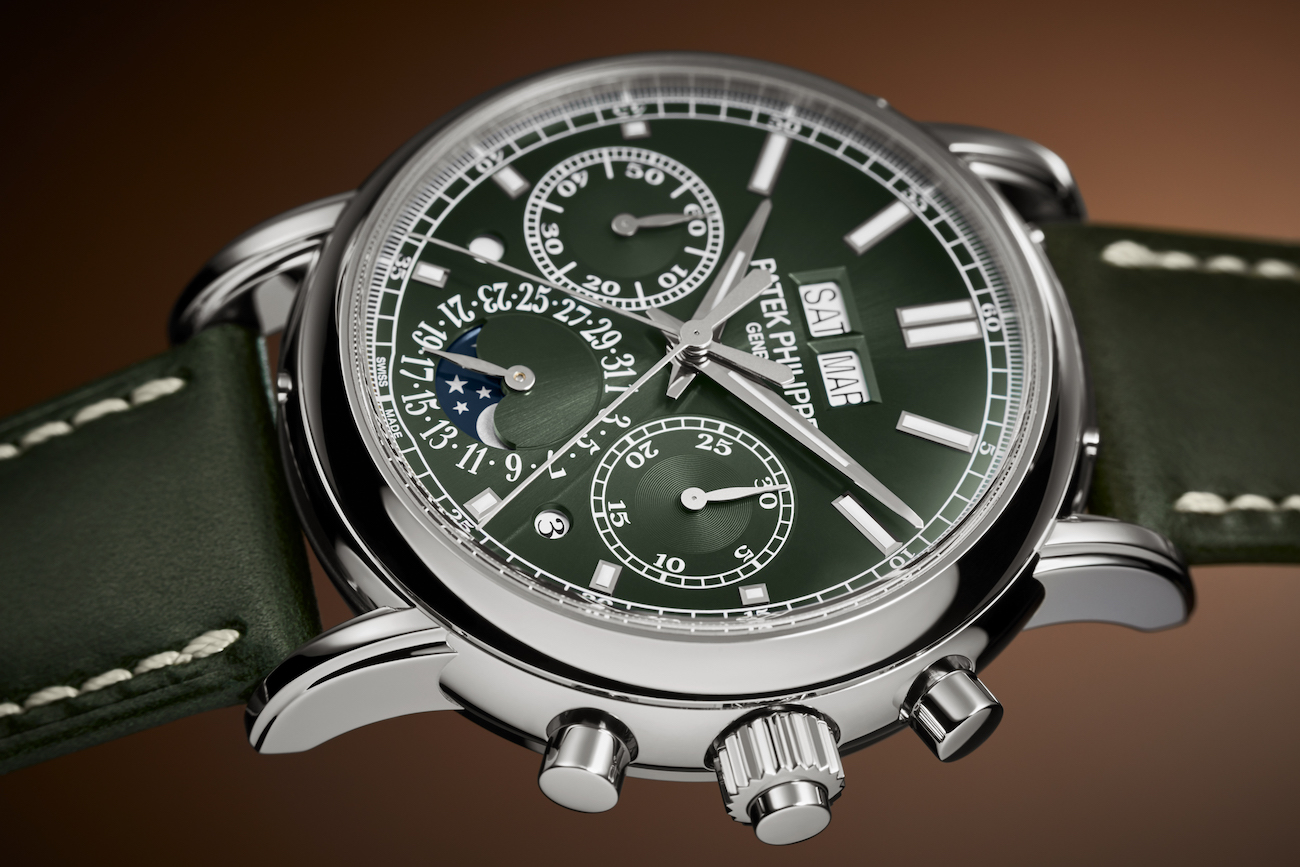 The watch complements a version released last year with a slate-grey dial and a rose-gold case. Price Upon Request.

In a premiere steel case, the Patek Philippe’s new Ref. 5935A-001 World Time flyback chronograph (with automatic caliber CH 28-520 HU) is bound to please collectors in search of steel Patek Philippe watches as well as those who covet its world timers. 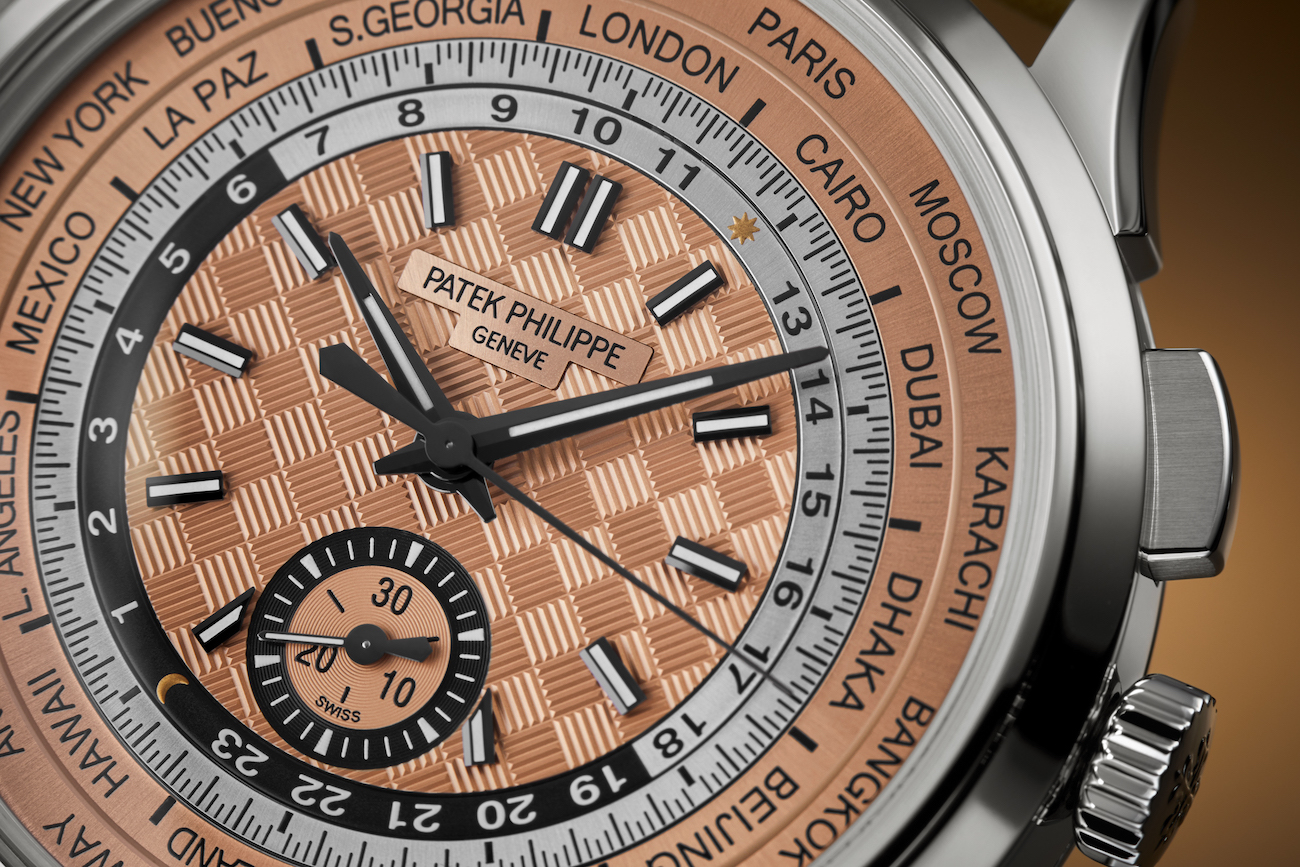 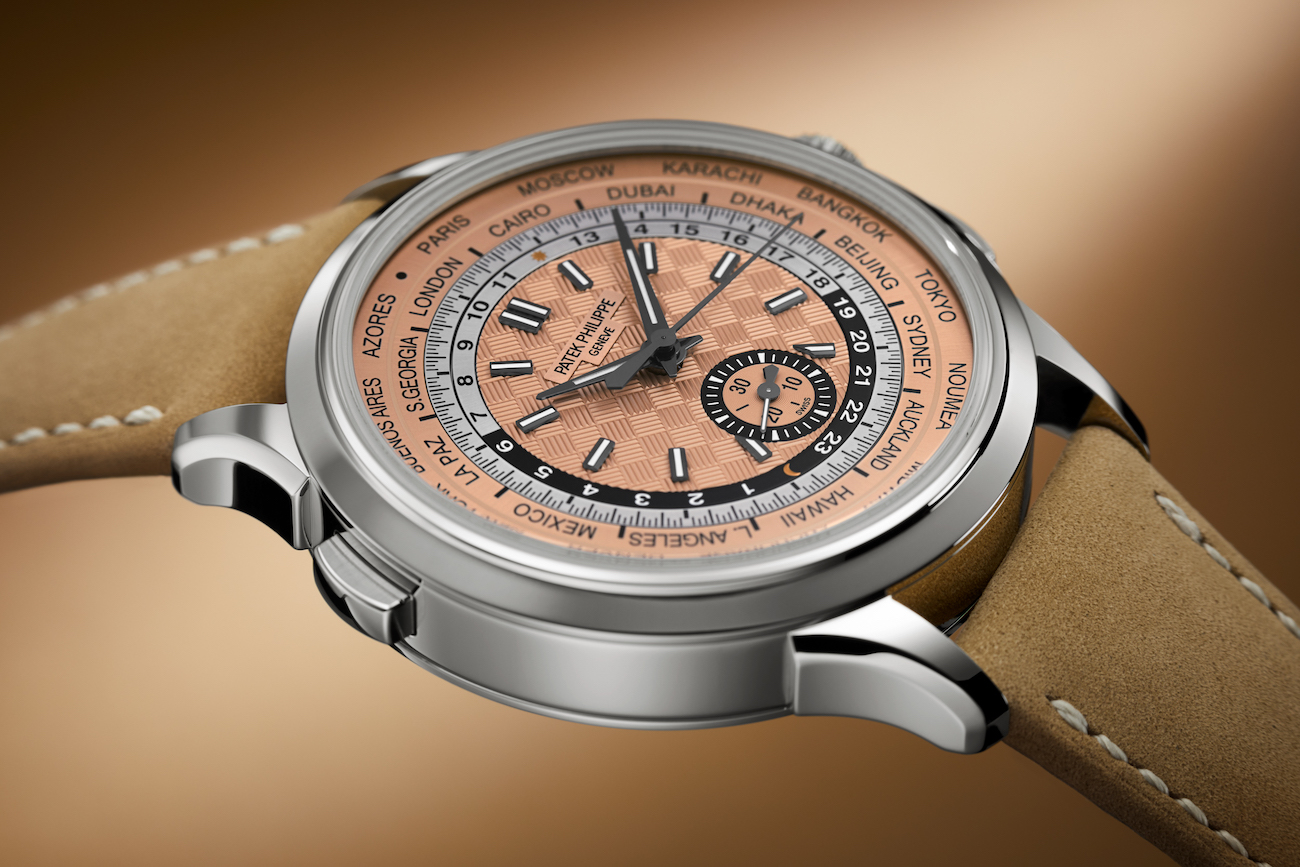 Patek Philippe adds an automatic chronograph to its contemporary Aquanaut Luce collection for the first time, and then decorates the watch (Ref. 7968-300R-001) with a rainbow of sapphires and diamonds. 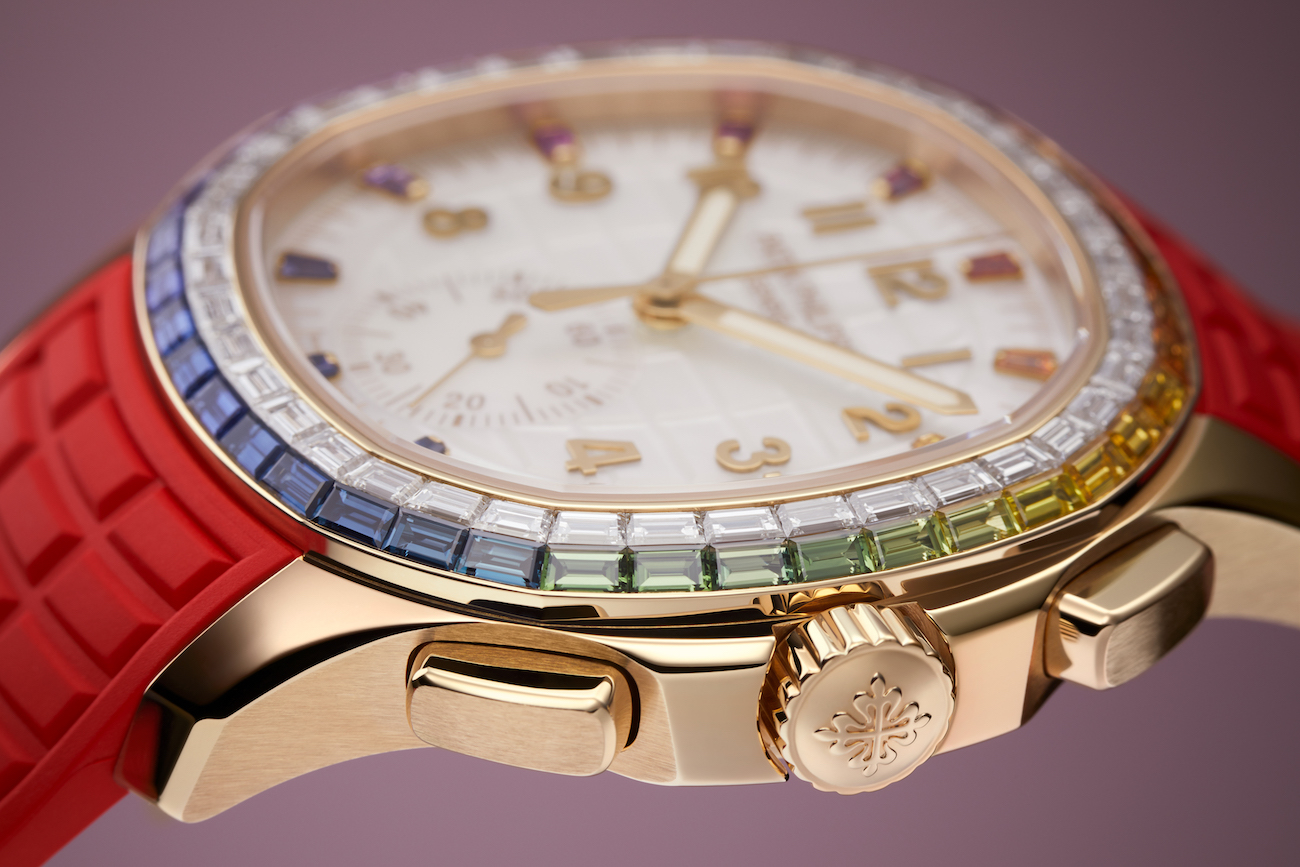 Patek Philippe has debuted a steel-cased Travel Time model with an eye-catching blue dial with a radiant sunburst finish and a subtle black gradation. 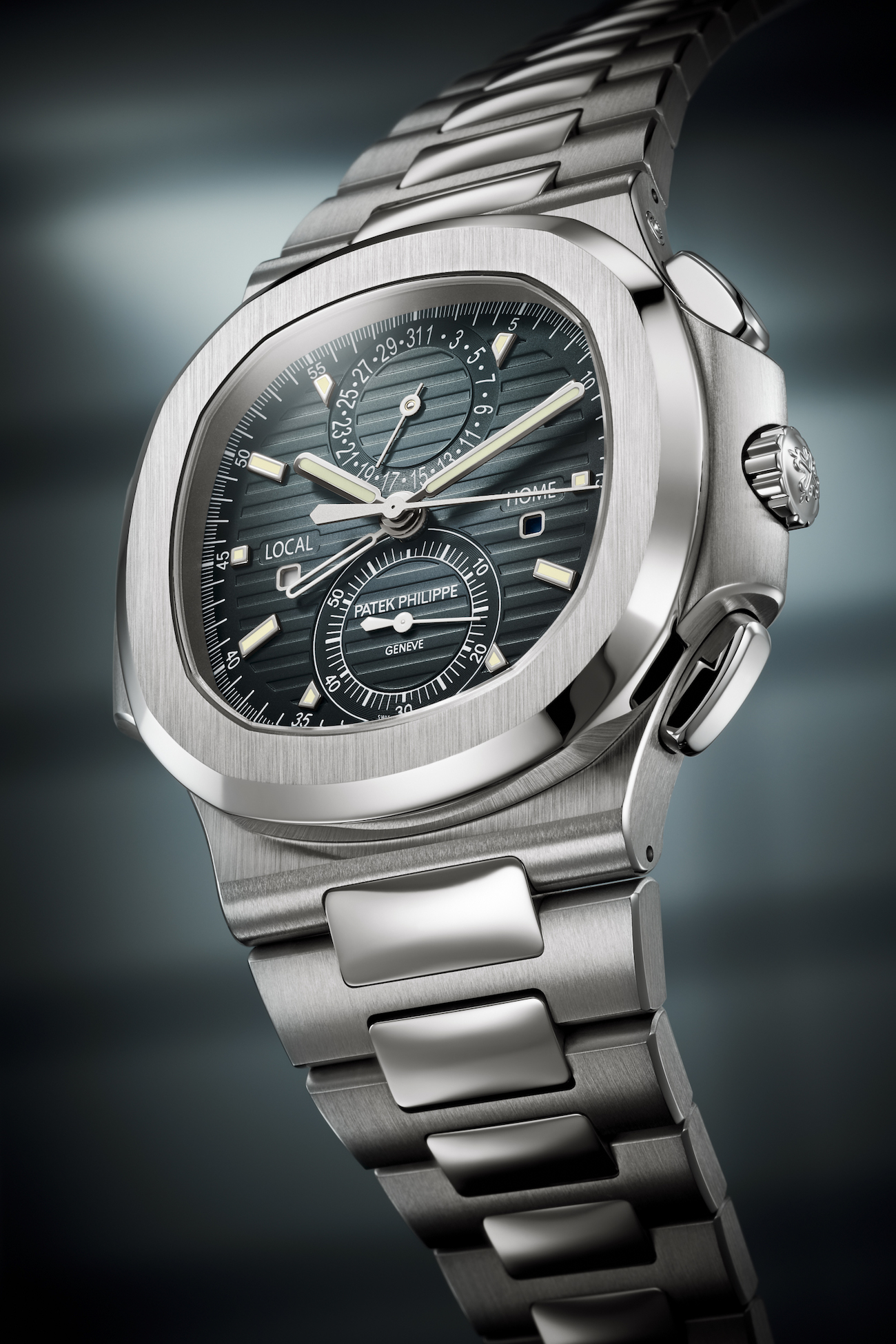 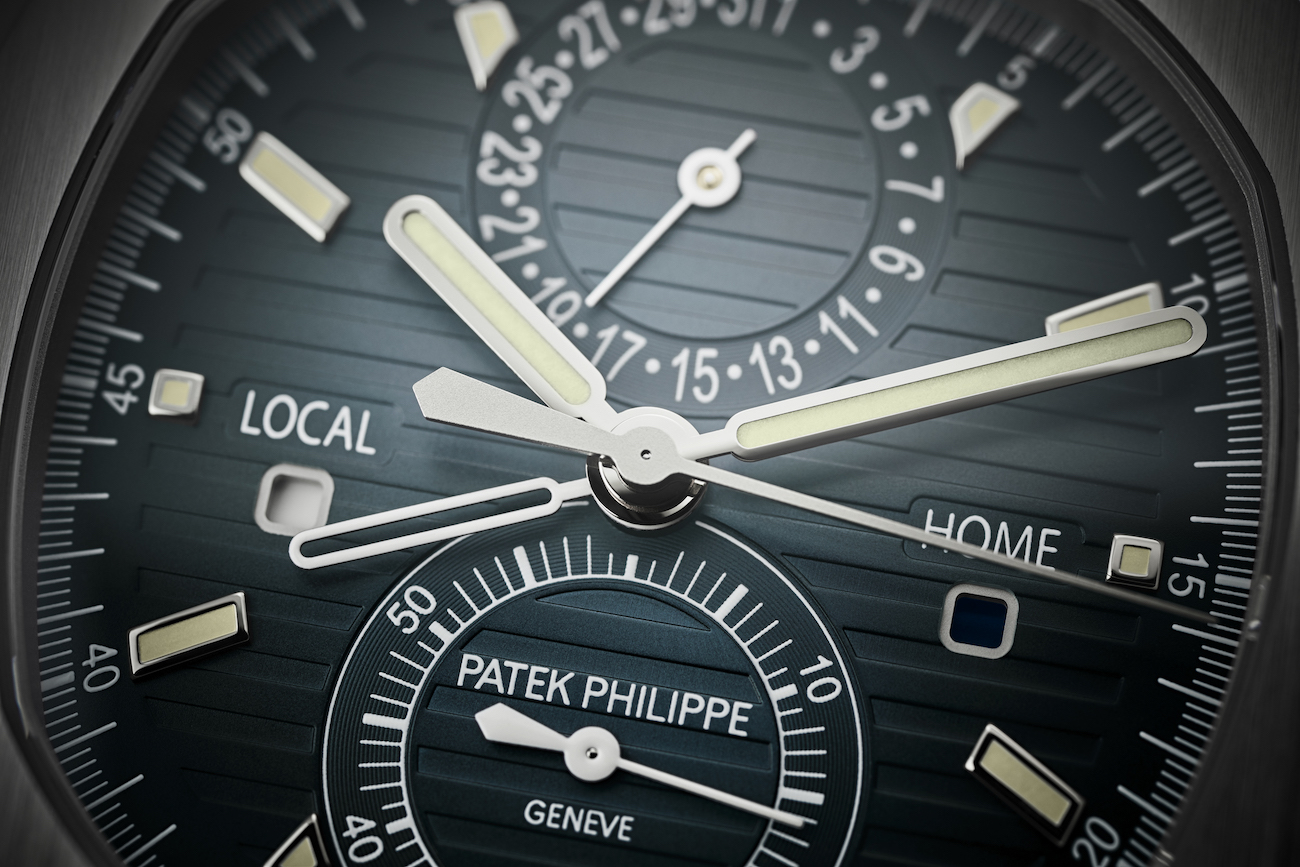 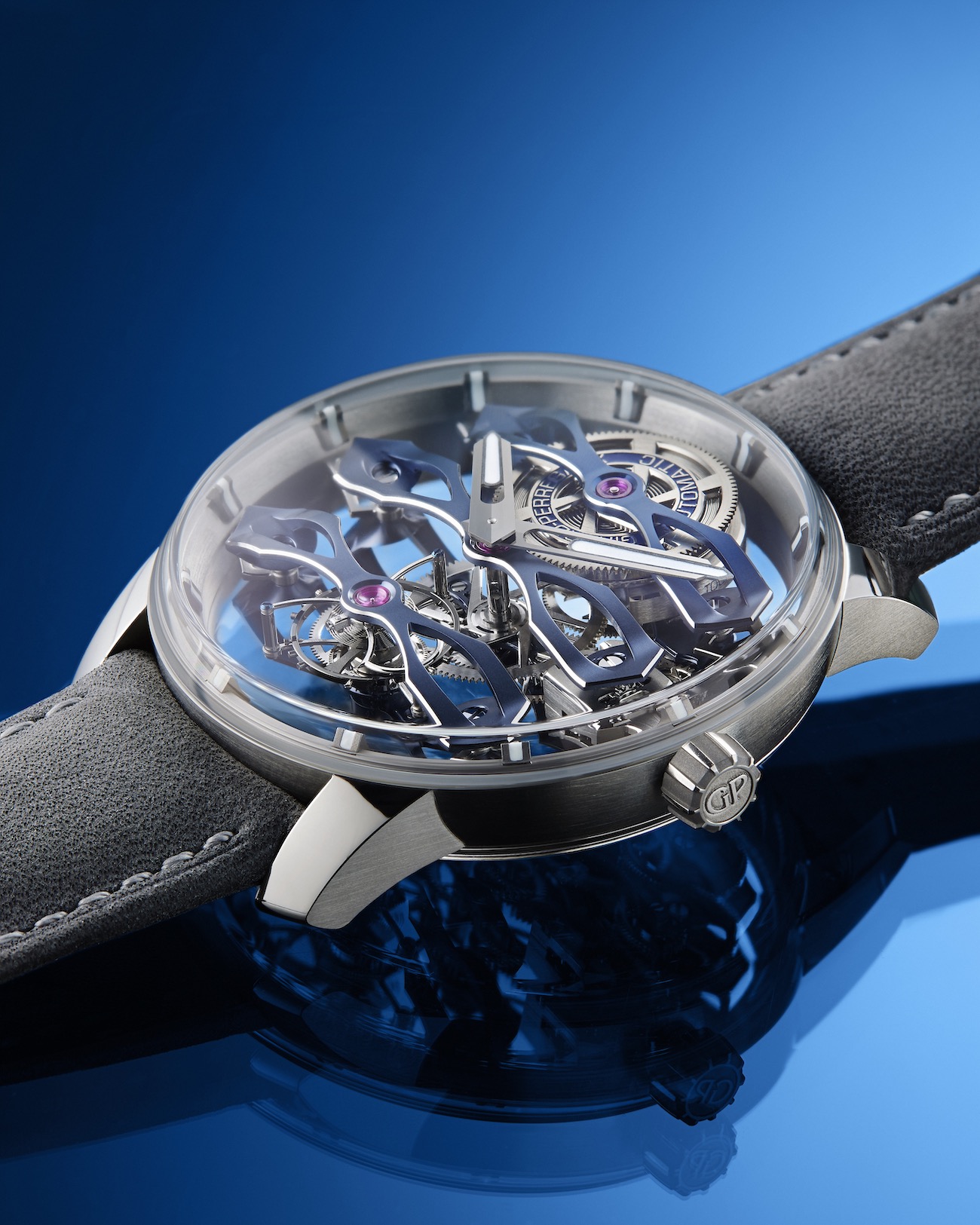 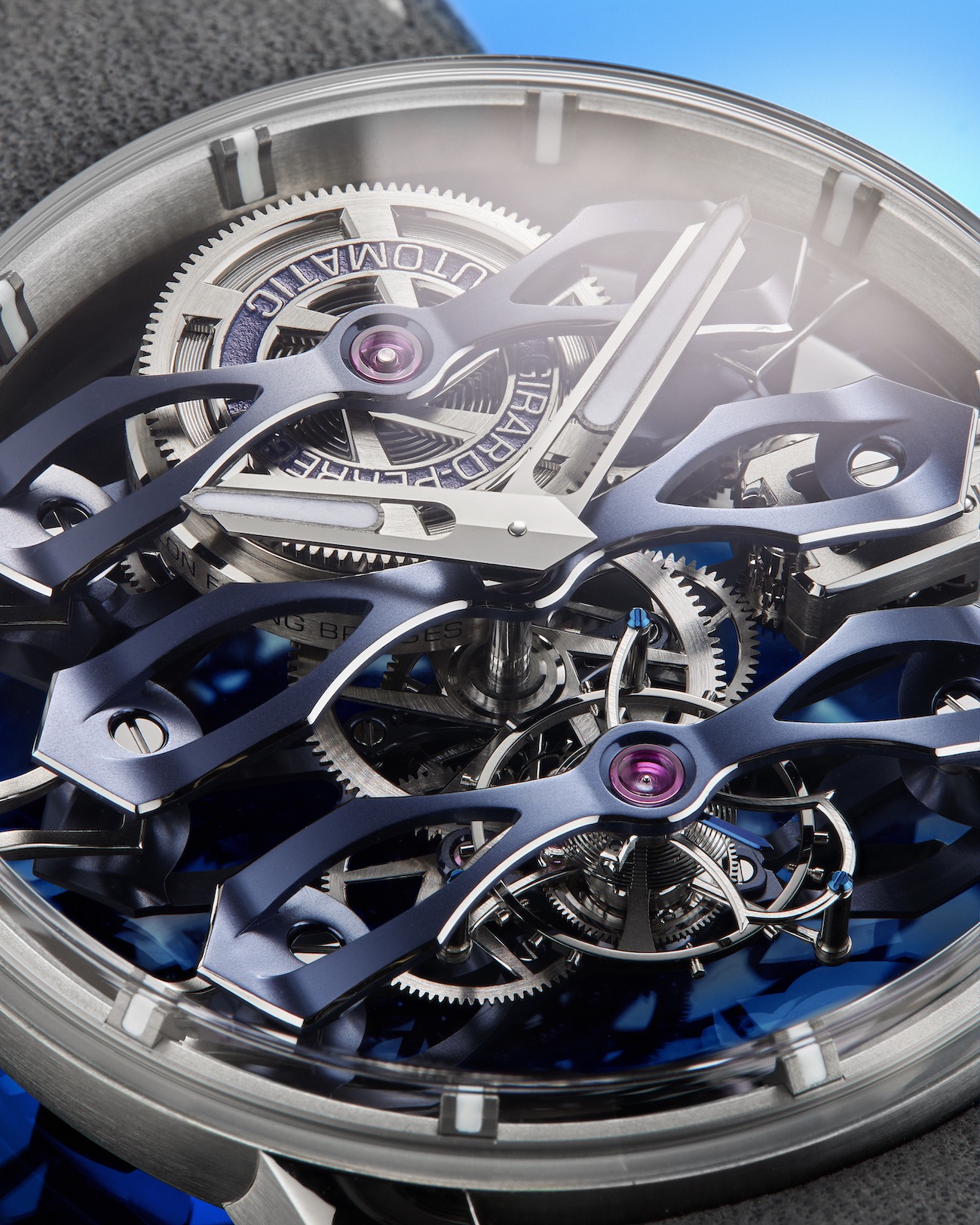 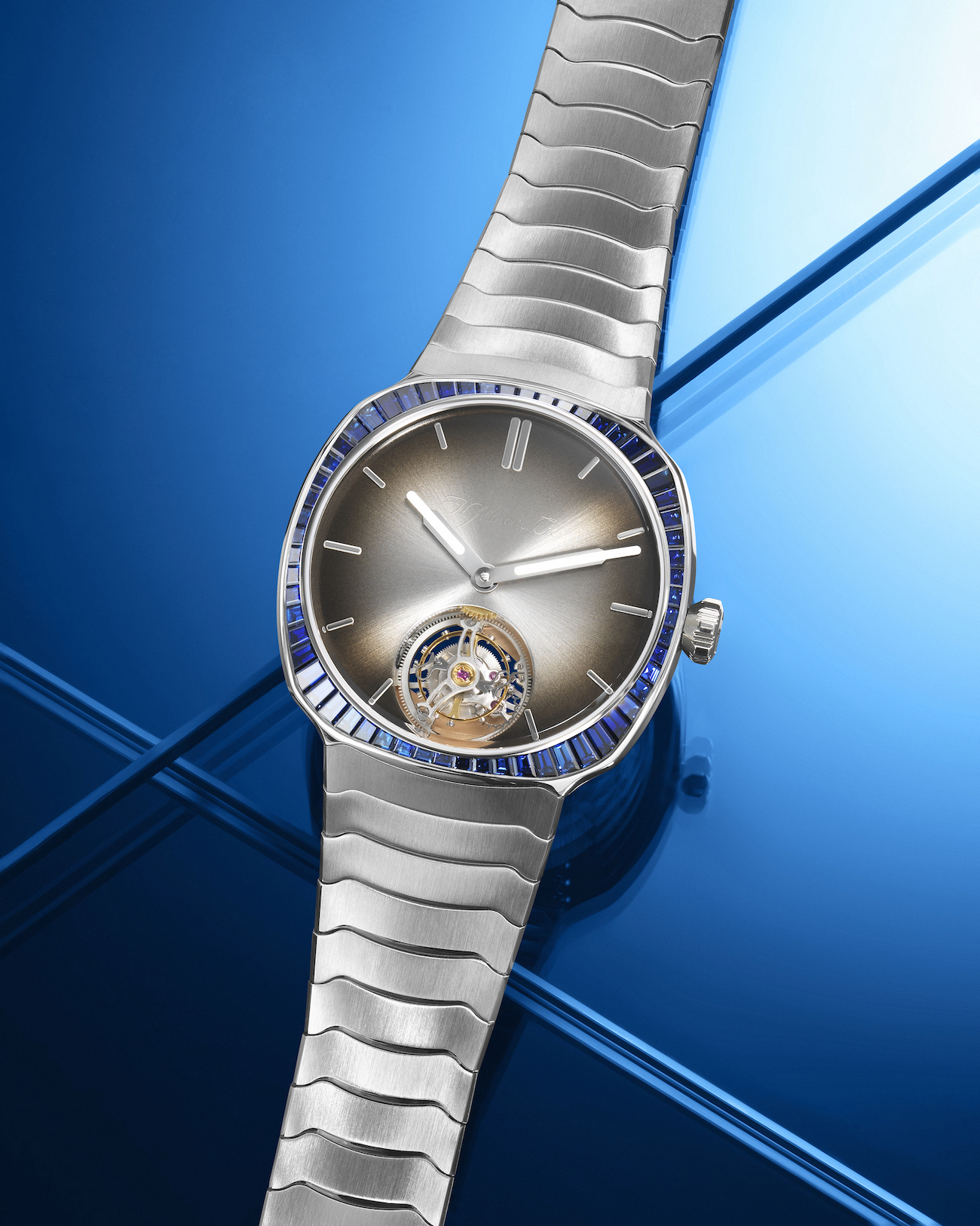 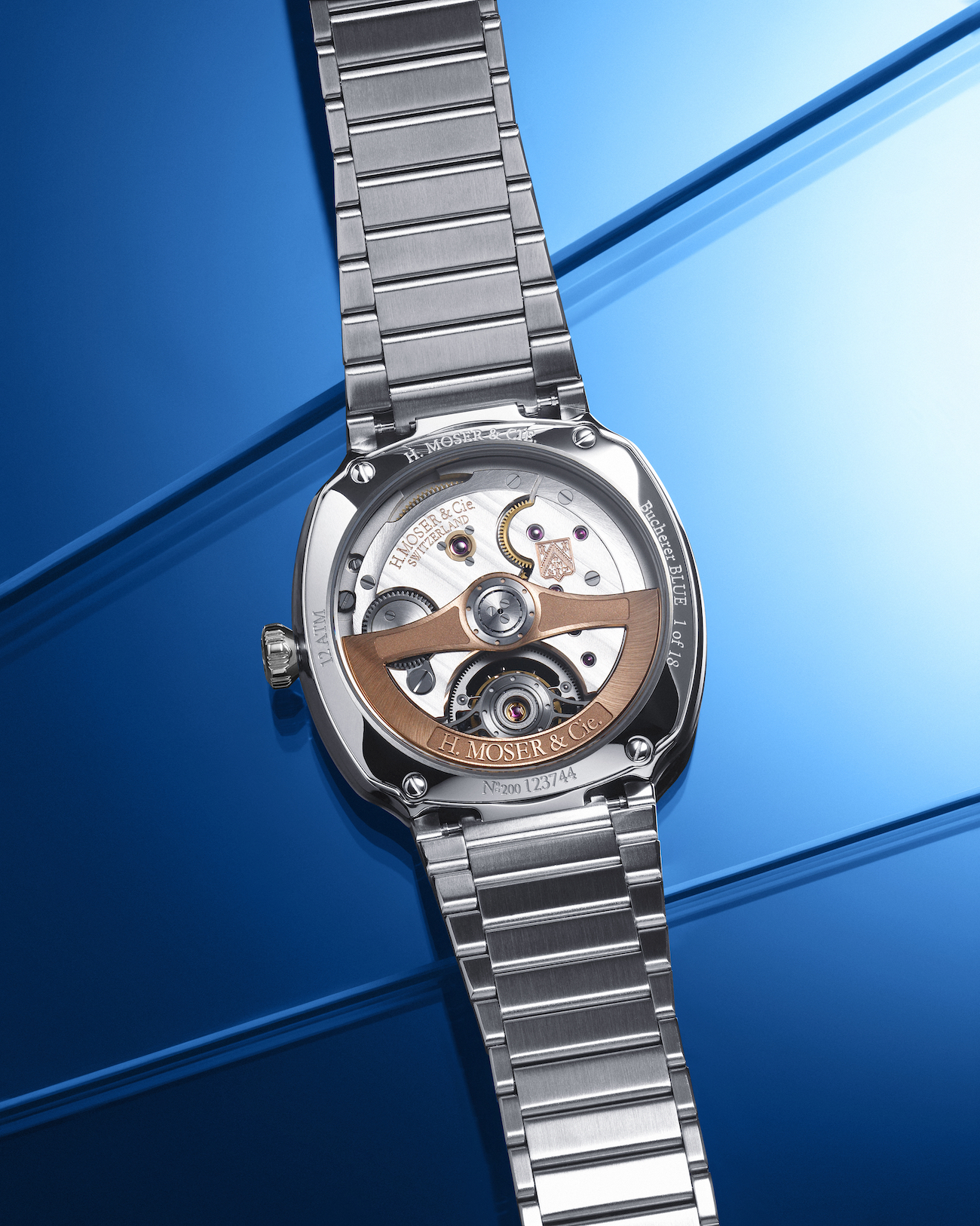 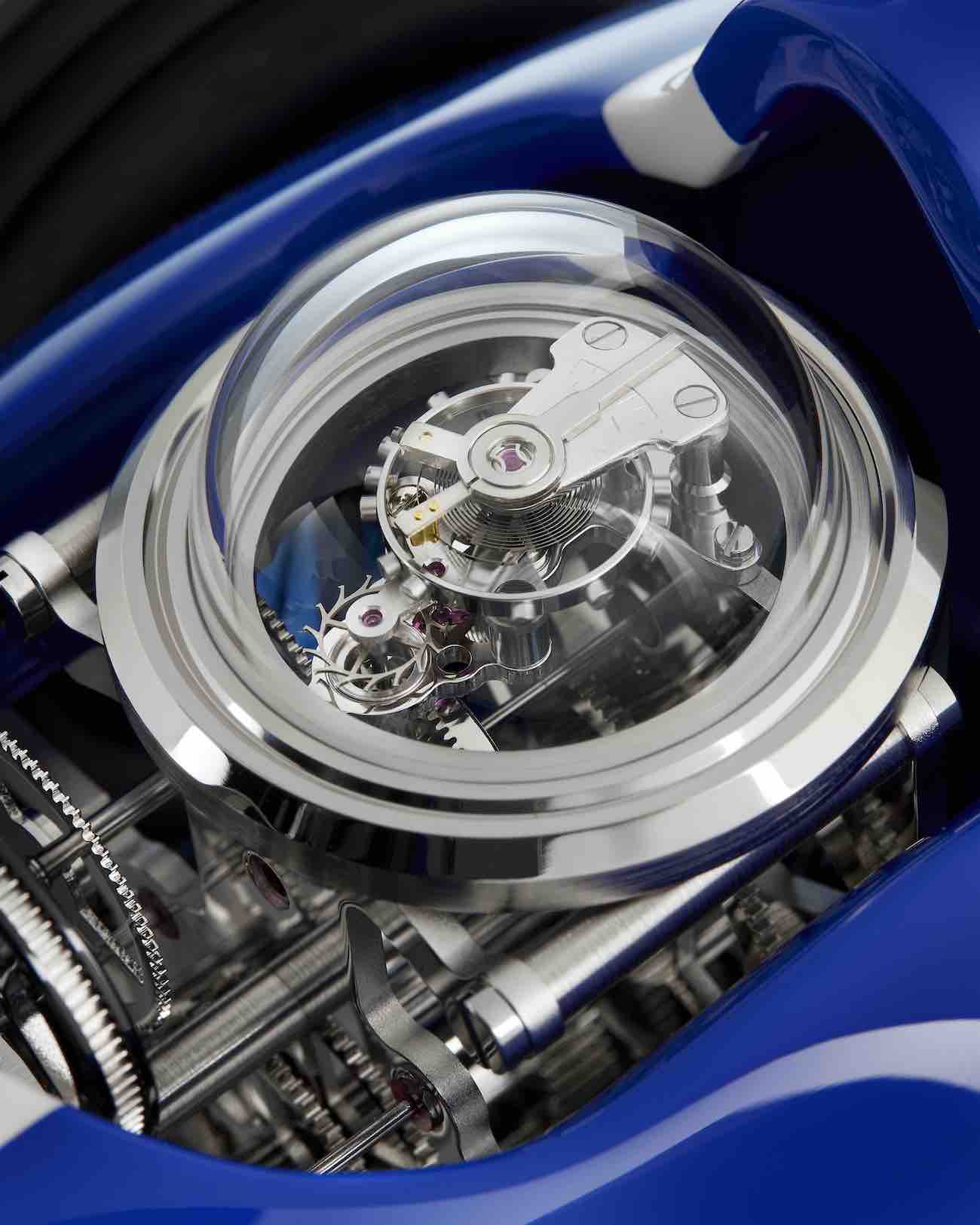 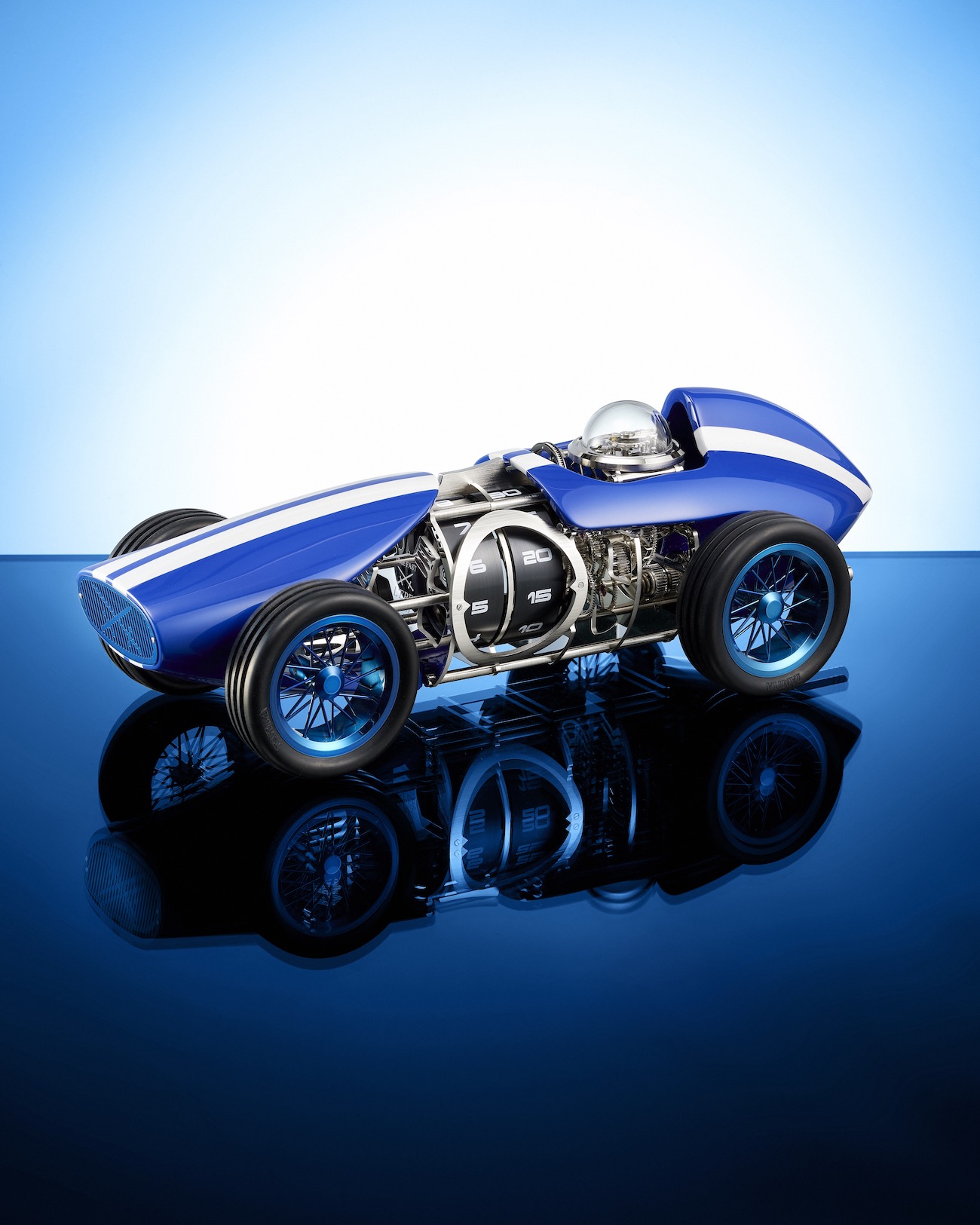