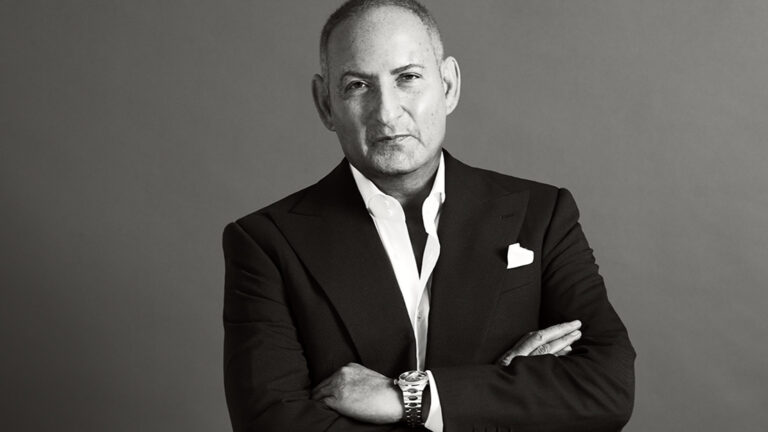 I would like to share with you a recent conversation I had with John Demsey, executive group president at the Estée Lauder Companies.

Demsey is well-versed in beauty, luxury, and creativity, so it may not come as a surprise that John is a watch guy too, with a love of timepieces that stretches back to his childhood.

At six years old, Demsey got his first watch, which was a Timex, and as he recalls it, a big deal. He came into possession of his second watch as a teenager during a trip to Japan when he picked up a special edition Seiko watch made for the Osaka Expo 1970 world fair.

As LED became the fashionable watch technology of the decade, John’s father then gave him a futuristic Pulsar timepiece.

However, what came next was Demsey’s “first real watch,” and it’s what most of us will agree is an absolute grail-worthy piece.

On his sixteenth birthday, Demsey’s father gifted him a Royal Oak, the very one that Gerald Genta designed for Audemars Piguet. Not only did John get a first-generation Royal Oak, but his dad bought himself a matching one too.

Hearing John tell the story, you can feel the emotion that surrounds this special occasion. It’s a memory that is as vivid and clear as if it happened yesterday. I love hearing about fathers and sons owning identical watches; I find it to be a beautiful and symbolic expression of tight familial bonds and being connected by time. For John, watches represent a continuation of life when special pieces are handed down from generation to generation.

Watches are, of course, a combination of beautiful art and industrial techniques, which parallels Demsey’s upbringing with a mother who was a painter and a father who ran a steel processing plant. His appreciation for design and beauty goes far beyond timepieces, as John is also an avid collector of art, photography and furniture.

For Demsey, watches are one of the few objects that men can wear to signify personal style. He learned from an early age about the subtle cues a watch could tell another person. It can speak volumes about who the wearer is, what he finds stylish, how he regards time, and what his passions are. On a recent trip to Japan for example, Demsey observed the frequent pairing of designer jeans and Rolex Sea-Dweller watches.

Demsey also associates watches with certain periods of life, especially with milestone events like graduation, career achievements, and so on. Buying a special watch is a way to give added significance to an event and it can also be a meaningful way to memorialize certain places, experiences and people. 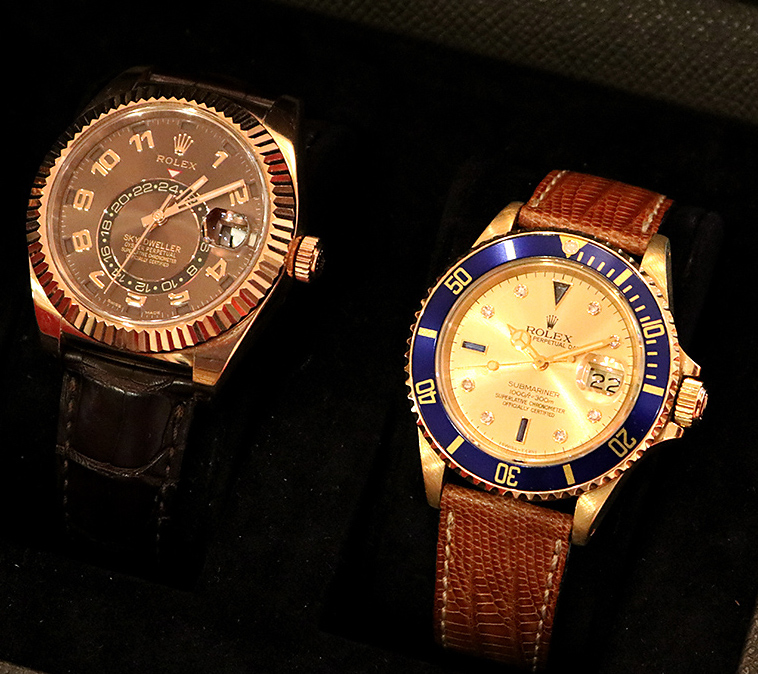 Similar to other collectors, John Demsey’s collecting journey has ebbed and flowed according to changing personal tastes and preferences. His focus has always been on the design of the watch, whether the color, bracelet, or style, rather than movements or timekeeping.

For example, he went through a period of collecting every single rendition of Andy Warhol Piaget watches—in seven colors. He found the design so special that he even custom-ordered dials, which is telling of John’s appreciation for timepieces with unique style.

But that’s not to say he doesn’t appreciate the classic icons either. He’s a big fan of Rolex, especially Daytona “Paul Newman” chronographs, and given his early discovery of Audemars Piguet’s famed sports watch, he’s also a fan of Gerald Genta hits like the Royal Oak and the Nautilus.

He enjoys the hunt of finding a special watch that few have. His decisions are not random but purposeful, as he takes the time to stay up-to-date with the watch market. He follows auction houses, reads Hodinkee and IW Magazine, and his social media feed includes watch brands and watch influencers. A good watch purchase for John is a mix of an emotional connection, a striking aesthetic, and topnotch quality.

While he used to stick to the “one in, one out” rule when collecting watches to ensure that they all got good wrist time. While the guideline has changed slightly to “three in, one out,” Demsey still believes that watches should be worn and not locked away in a safe. He doesn’t buy them for a future return on investment but simply because he loves them. He purchases watches using a variety of sources, including auctions, dealers, boutiques, online platforms, and can sometimes get an insider’s tip on an available piece via a phone call too. However, he says that his best watches were found during trips to Milan and Rome.

When I asked Demsey how he feels about luxury watch brands selling their timepieces online, he doesn’t think anything can replace the experience of an in-boutique purchase. Trying on watches in a store or discovering a hidden timepiece in the back of the shop is all part of the excitement of in-person watch shopping. Yes, you can certainly find and buy watches easier online and the Internet can help you locate a seldom-seen reference, but the sense of discovery and anticipation can also be lost.

However, the online watch world is a great place to get educated about watches. For example, if Demsey finds something he likes, he does his research online first to make sure prices and other details are in order before pulling the trigger.

It’s no secret that watch buying and collecting has flourished over the last fifteen years or so. Demsey believes that this phenomenon is fueled in part by people seeking objects that are timeless in design and built to last. We’re bombarded with so many disposable items today that grounding ourselves with beautiful and long-lasting pieces like art, furniture or watches can give immense pleasure. 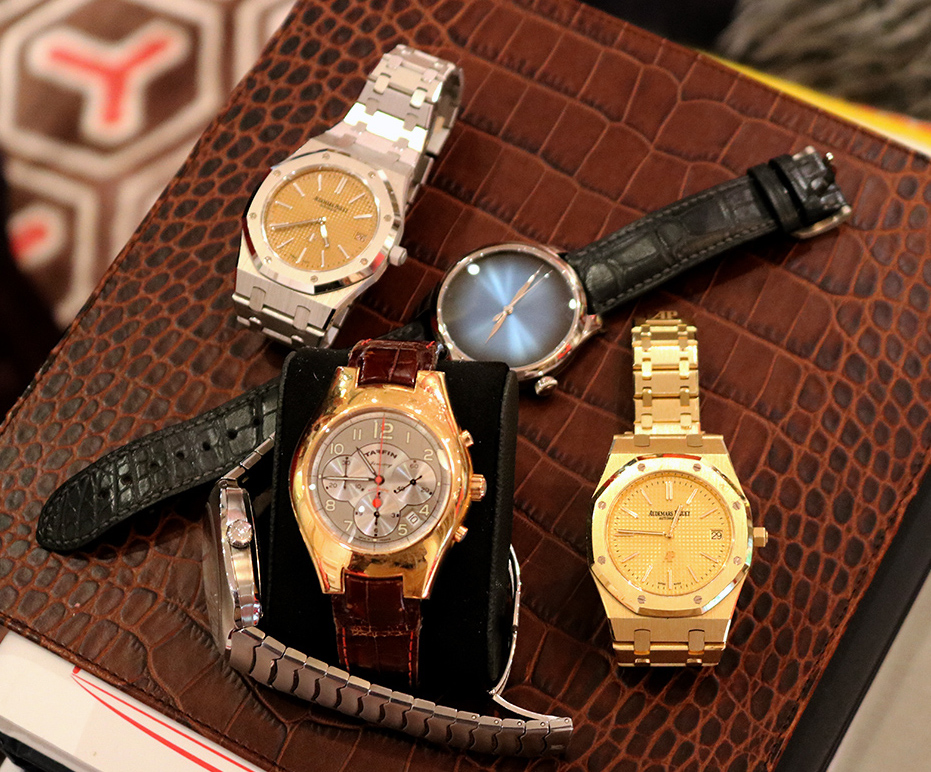 The watch market is certainly not immune to fleeting trends; we’ve witnessed so many watch styles over the decades, from the understated and restrained to the opulent and oversized. Gold metals moved aside for white metals, only to come back again in full force. Demsey believes that there will be a rebirth of the aerodynamic designs that were prevalent in the 1970s joined by the smaller Art Deco-inspired pieces that gained prominence in the 1930s.

Demsey also admires exclusive independent watchmakers like F.P. Journe that find their voice and produce small batches of high-quality timepieces for an enthusiastic following. In fact, during these past eighteen months, Demsey became even more interested in watches. This is despite being tethered to his at-home computer screen where the time is always on display and he has fewer occasions to wear his watches out in the world. Yet, he discovered new watch brands and models, just like the H. Moser & Cie piece strapped around his wrist during our interview. He clicked with the brand, just like he did with Urban Jürgensen and Ressence.

After hearing John speak during our interview, I have a sense that his appreciation of art, love of collecting, and emotional connection to beautiful objects were rooted at a young age and have become an integral part of his life. His enthusiasm for watches is one way in which he expresses his passion for great style and it was a pleasure to learn about his story.