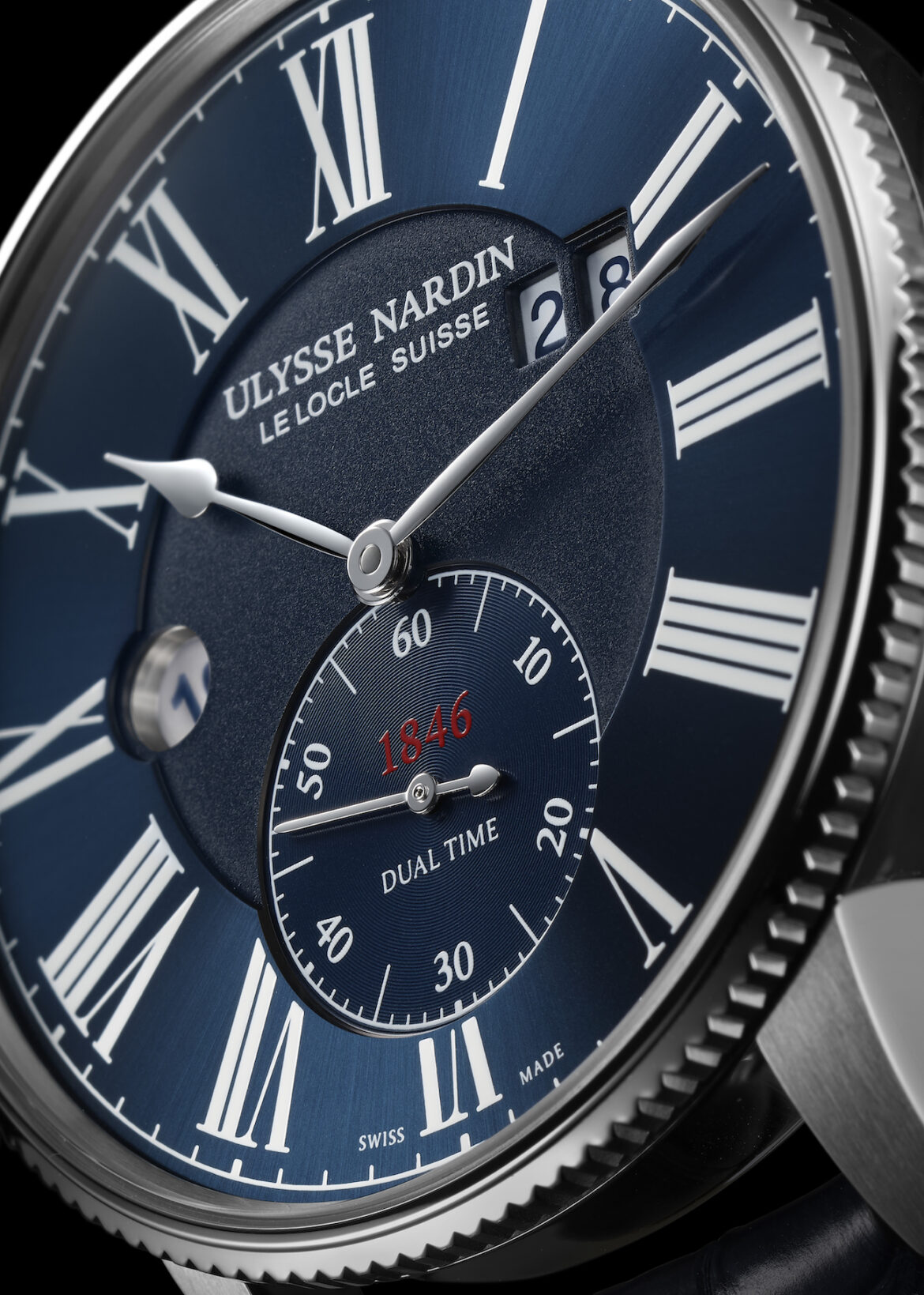 The first model of the new trio adds Ulysse Nardin’s innovative dual-time display to the Marine Torpilleur collection. Fit with in-house caliber UN-334 with a silicon escapement wheel, anchor and balance-spring, the new watch adds an instant-change, dual-pusher GMT function to the series in a 44mm steel-cased model with a sun-ray satin-finished blue dial. 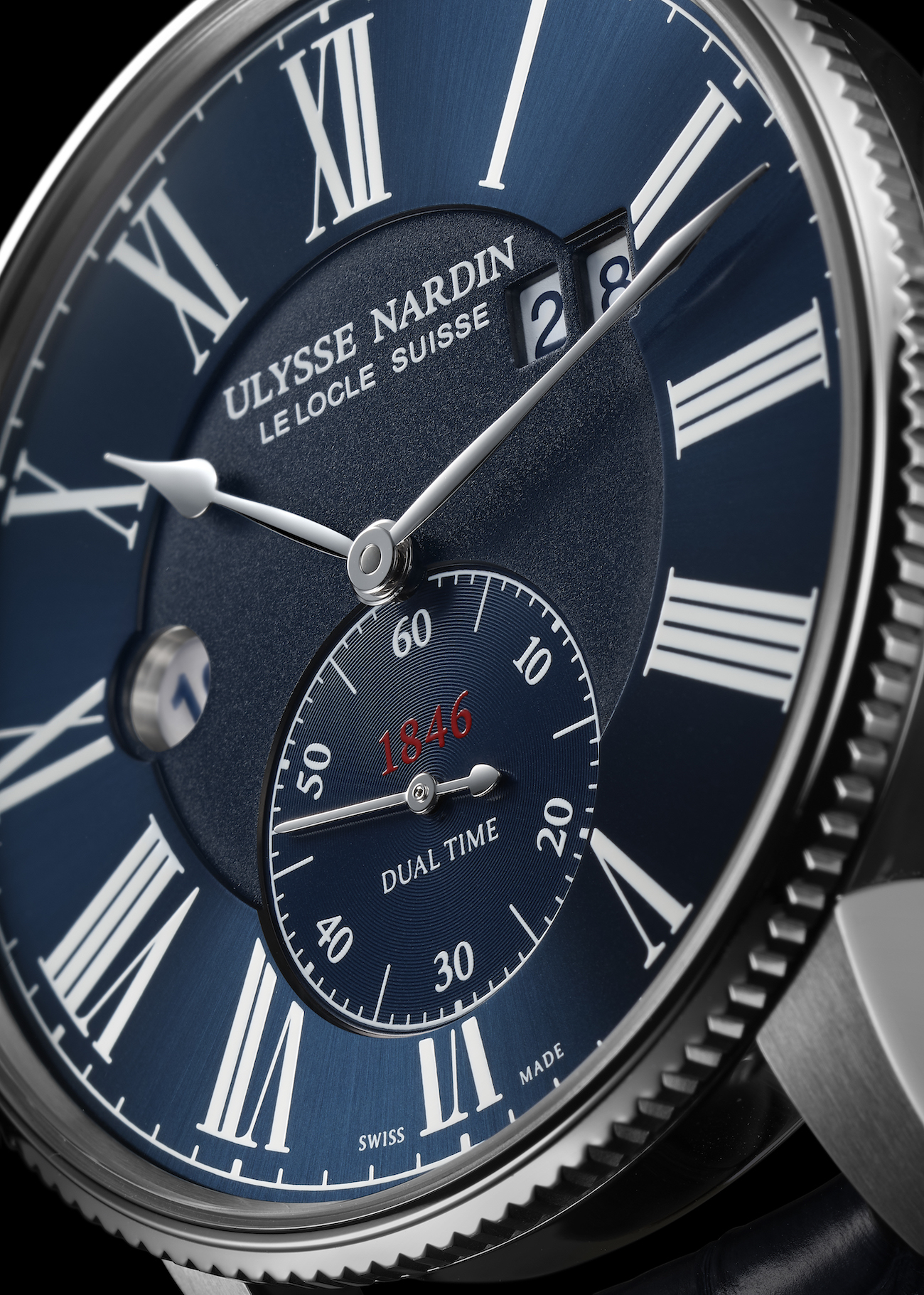 Developed initially by Ludwig Oechslin in 1994, the dual-time function was among the first to allow an instant-change, plus-or-minus GMT hour hand, activated using one of the two push-pieces.  While the home time display on the new Marine Torpilleur Dual Time operates continually in an aperture at 9 o’clock, the wearer can quickly move the hour hand forward or backward to show local time using the “+” and “-” push-pieces at 8 o’clock and 10 o’clock. All calendar functions remain in syncs regardless of the adjustment. Price: $11,500.

The watch highlights the work of artisans at Donzé Cadrans, Ulysse Nardin’s own watch dial facility. The term Grand Feu means ‘big fire’ and refers to the melting the enamel powder in a furnace when creating the dial finish.

On this enamel dial Ulysse Nardin fits the watch’s power reserve indicator at 12 o’clock and the namesake tourbillon aperture directly across the milky white expanse at 6 o’clock.

Ulysse Nardin’s own UN-128 automatic caliber powers the flying tourbillon with constant escapement, which is fitted with a flying silicon anchor. You might recall that in 2015 Ulysse Nardin  won the Tourbillon Watch Prize at the GPHG (Grand Prix d’Horlogerie de Genève) ceremony with this patented system. 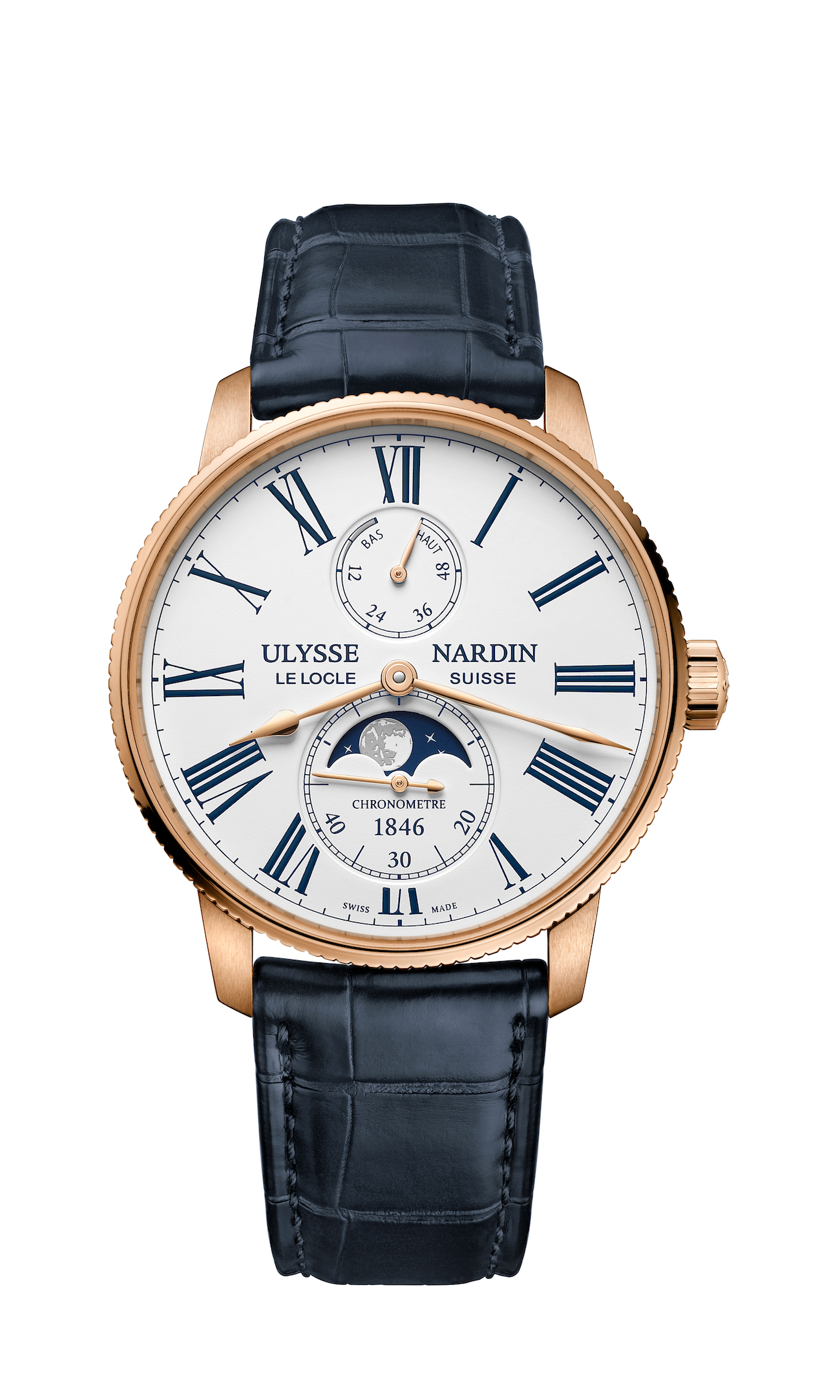 Ulysse Nardin debuted its first Marine Torpilleur Moonphase models in 2021 with a stainless-steel case and a blue or white dial as a limited edition of 300 pieces per model. This year, the watchmaker adds the watch to its permanent collection, but now sporting a more luxurious 42 mm rose gold case.

Again, we see the power reserve display at 12 o’clock balanced on the dial layout with the small seconds and moon phase indicators at 6 o’clock. Note the silvery moon image on the disc elegantly contrasting with the blue PVD sky around it. Ulysse Nardin supplies the watch with a dark blue alligator-skin strap with rose gold folding clasp. Price: $22,600.