Ulysse Nardin this week refreshes its Executive Dual Time with a slightly smaller case, reduced lug size, thinner bezel and a decidedly cleaner dial. This new, dressier version, however, retains the watchmaker’s instant second-time-zone display adjustment, a feature Ulysse Nardin debuted in 1994 well ahead of just about any other manufacturer. 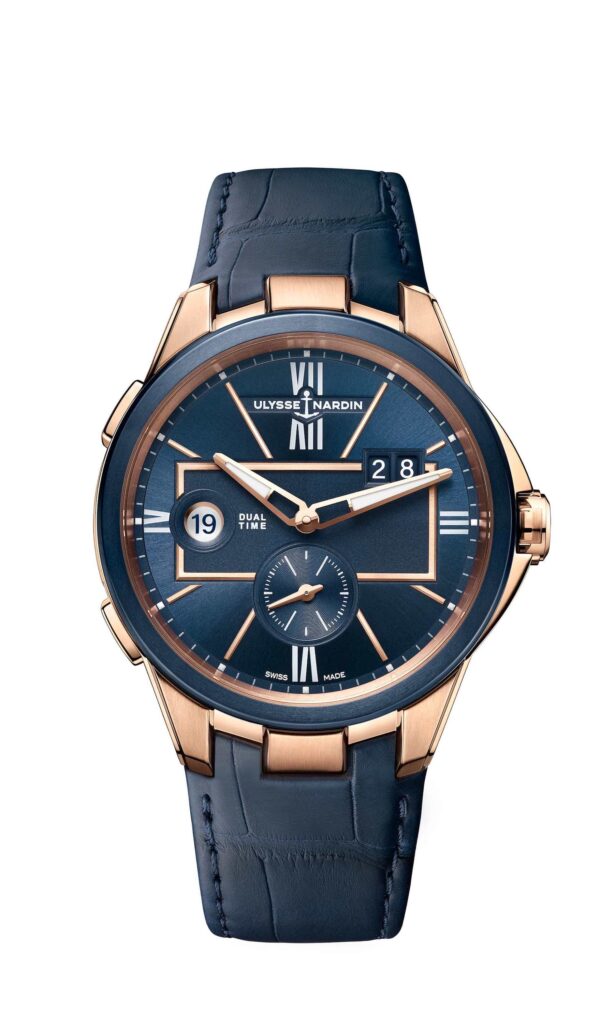 Ulysse Nardin’s system, still among the simplest available, allows the user to adjust the local time hour hand forward or backward (in one-hour increments) with the touch of the “+” and “-” pushers located opposite the crown. The ‘dual time’ window will continue to display the hour at the wearer’s home. The date adjusts automatically with the local time as indicated by the hands, though it can also be adjust manually using the crown. 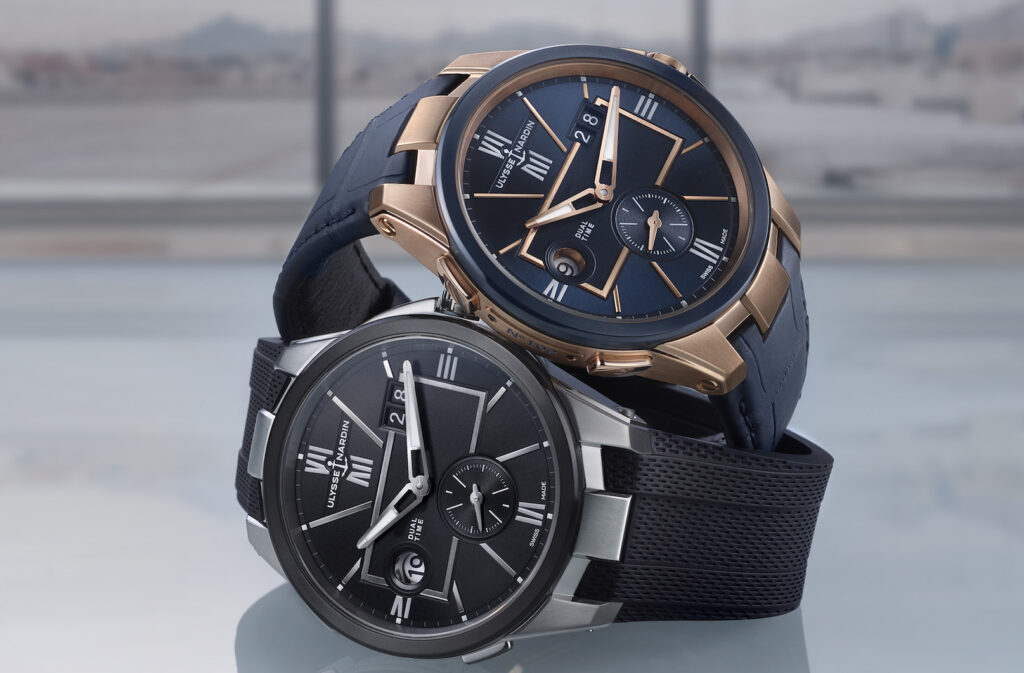 Now in the same case as the newly prominent Skeleton X models, the new Dual Time presents a more subdued dial, with several alterations, when compared with the previous version. The new case also measures 42mm in diameter, a bit smaller when compared to the earlier collection’s 43mm measurement. 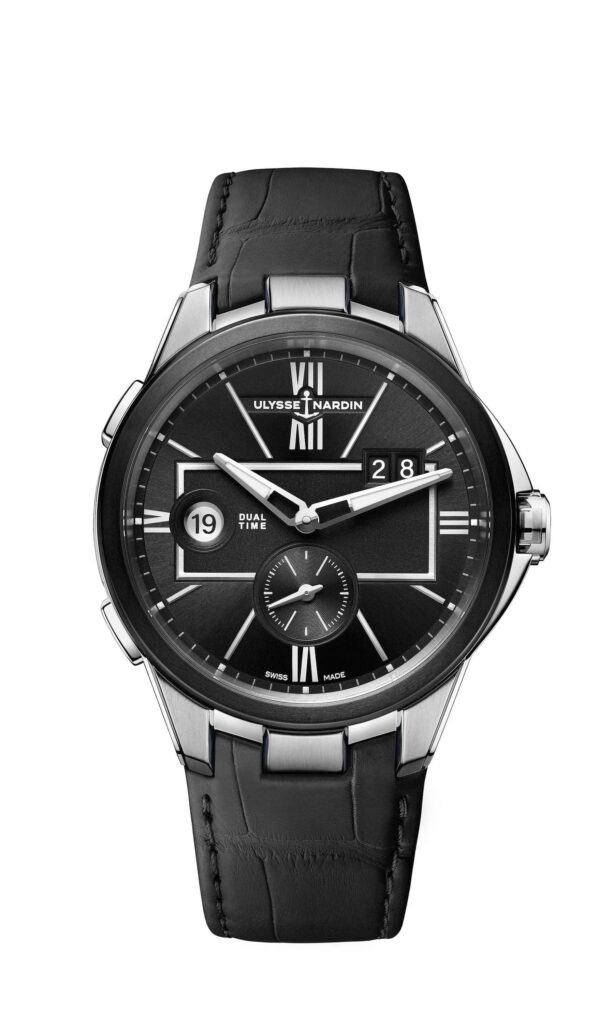 First, smaller Roman numerals at the twelve, three, six and nine o’clock locations no longer dominate the dial as they do on existing models. In addition, Ulysse Nardin has moved the watch’s seconds markers from the rectangular track in the dial’s center to the inner bezel. And finally, the ‘dual time’ text no longer circles the round home time display, but more simply abuts it on two lines. 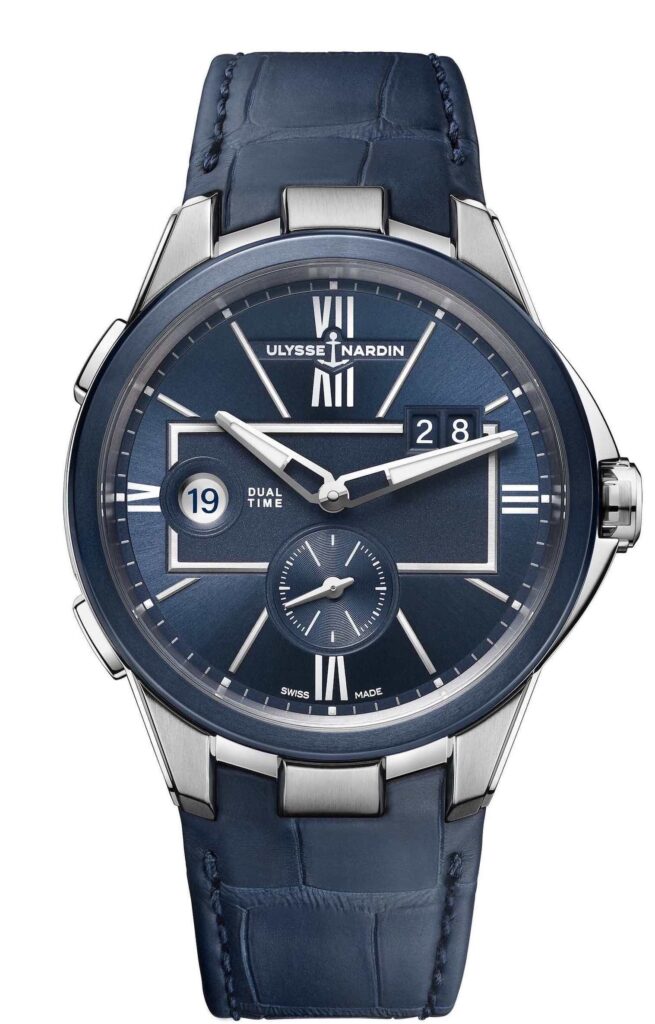 Ulysse Nardin’s Caliber 24, which combines the brand’s superb dual-time module to an upgraded ETA base caliber, is visible through the exhibition case back. Look for a new oscillating weight with a prominent, encircled UN logo Ulysse Nardin through the sapphire back. 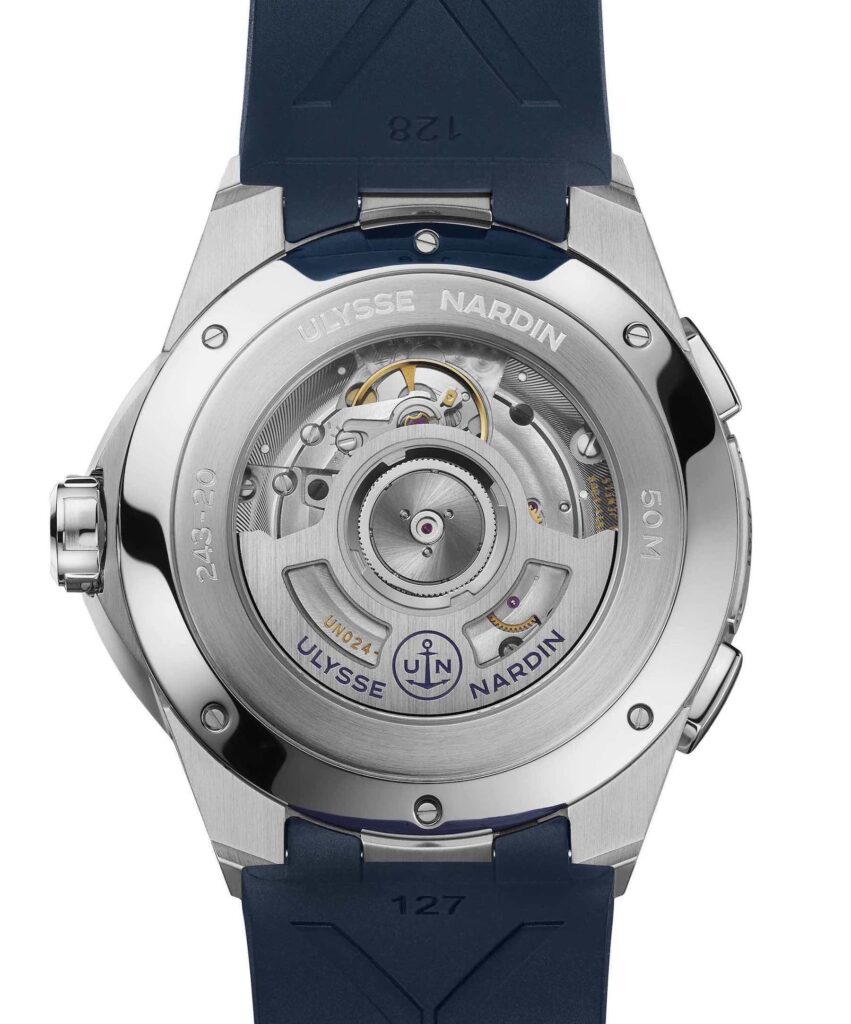 Ulysse Nardin is offering the new Dual Time in either a rose gold case with a blue dial or a stainless steel case with a blue or a black dial. All are water resistant to fifty meters and each piece is individually numbered. Prices: $22,800 (Rose gold), $8,300 (black or blue dial, steel case).

Ulysse Nardin this week launches Blast, the latest of the Le Locle-based watchmaker’s Executive Skeleton X series of open-worked watches that feature distinctive rectangular and X-shaped bridges within a broad, round bezel. The four new 45mm Blast watches accentuate the collection’s see-through X design with a new silicon tourbillon placed within its own X-shaped cage.

With these shape-within-a-shape bridges, the new Blast retains the geometrical focus we’ve seen in recent Ulysse Nardin X models, including the three-horned strap link, a smooth, often colored bezel and the barrel at 12 o’clock.

But the new Blast offers much that differs from previous Skeleton X offerings, especially with its new case architecture and a new tourbillon movement employing Ulysse Nardin’s first-ever micro-rotor.

The new skeletonized UN-172 movement (an evolution of the UN-171), with its silicon escape wheel, anchor and balance spring, powers each of the four Ulysse Nardin Blast watches.

As the first automatic tourbillon within Ulysse Nardin’s Skeleton collection, you’ll find a platinum micro-rotor (visible only from the front of the watch) winding the mainspring, supplying a three-day reserve when fully wound.

Ulysse Nardin has also restyled the lugs, making them more angular and finishing each triangular surface differently. The lug surfaces, polished by laser using a new technique devised by Ulysse Nardin, alternate between polished, satin-finish and sand blasted. The idea, according to Ulysse Nardin, is to mimic “sharp rocks that jut out of a volcano.”

Also new here is a self-deploying, three-blade buckle that releases with a single click. When closing, the system simultaneously pulls both ends of the strap toward the clasp.

Ulysse Nardin is making four distinct Blast models: White, Blue, Black and Rose Gold. Each offers its own set of color or design accents ­– even within the tourbillon itself. The Black Blast, for example, comes with a ceramic upper middle case and bezel, black rectangular bridge, red and black double “X” pattern and a stunning new red balance wheel – the first time Ulysse Nardin has ever colorized its balance wheel.

Several strap options are available for each model, including structured rubber, leather and velvet.

Ulysse Nardin has partnered with Ocearch, a scientific organization that works with researchers and educational institutions to better understand the movement and habits of sharks. 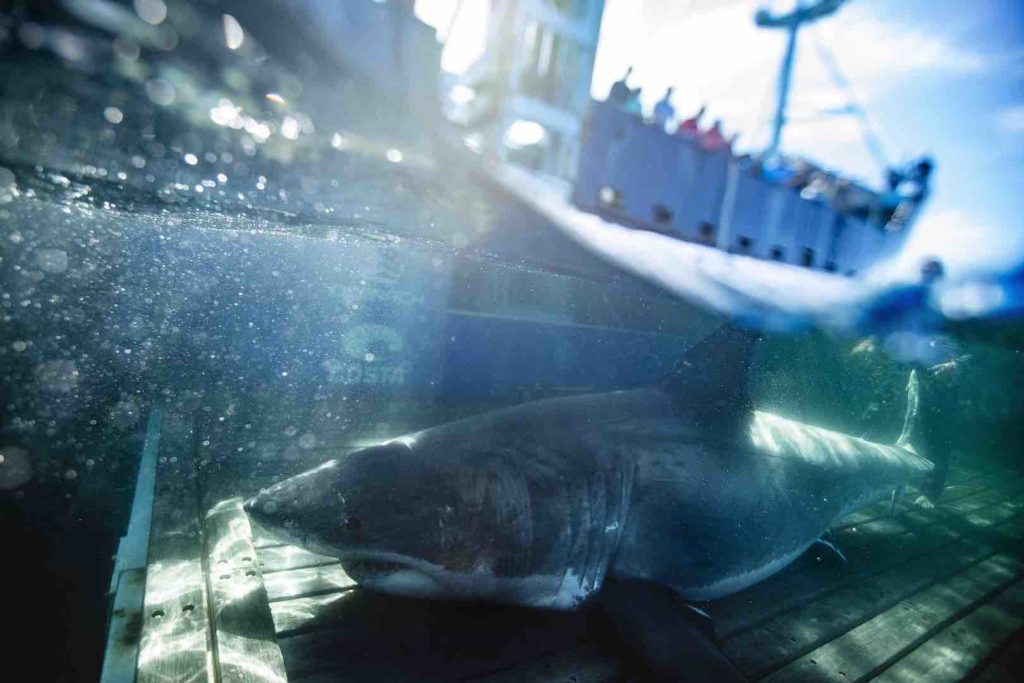 The Le Locle watchmaker has historically manufactured marine chronometers and has even more recently released dive watches symbolized by the shark. The new partnership means Ulysse Nardin will financially back Ocearch’s mission and assist researchers in their work and provide resources to better understand the shark’s role in the ocean’s fragile ecosystem.

Ulysse Nardin U.S. brand president François-Xavier Hotier says he has wanted to align the brand with a nonprofit marine life conservation organization since he started with the watch company in 2018.

“Ocearch’s passion and their commitment to the shark species equaled that of our company’s and I knew Ulysse Nardin could make a positive impact toward their, and truly our, collective mission to save the shark species and therein help balance the ocean’s delicate ecosystem,” he said in a press release.

“In speaking with François-Xavier Hotier we came to realize, not only our shared passion for the impact of shark-based research but of the importance of doing good work for good,” says Chris Fischer, founder of Ocearch. “We rely on companies like Ulysse Nardin to help raise awareness for our mission and look forward to working with the team behind the scenes and on future research expeditions.” 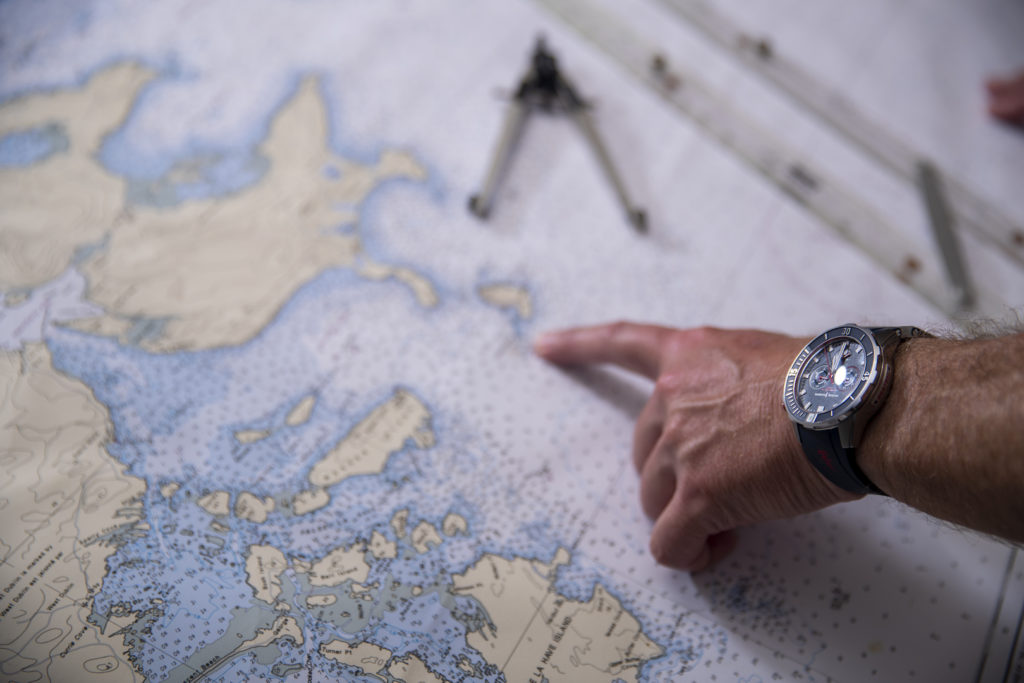 Ulysse Nardin will support Ocearch on its upcoming expeditions and work together to raise awareness around marine research. The organization is currently planning two expeditions for the end of 2020. The first will take place August 5-20 in Massachusetts and the second from September 3-28 in Nova Scotia.

In response to the COVID-19 outbreak in the Americas, Kering has partnered with the CDC Foundation to provide personal protective equipment and other vital supplies to assist in meeting the urgent needs of healthcare workers across the region.

Kering, which includes Gucci, Boucheron, Ulysse Nardin and Girard-Perregaux under its corporate umbrella, will collectively donate $1 million to the CDC Foundation to support the efforts of frontline healthcare workers in the United States, particularly in highly impacted states such as New York, New Jersey, California, Florida, and locations in Latin America.

The CDC Foundation is the independent nonprofit created by Congress to extend the lifesaving work of the Centers for Disease Control and Prevention (CDC) through public-private partnerships. The CDC Foundation’s Emergency Response Fund allows for the deployment of flexible resources to fulfill priority response needs where appropriated funds are not available or cannot be deployed quickly enough.

“Kering’s contribution hopes to create complementary impact alongside government in ways that will protect and provide lifesaving support as together we work to combat this unprecedented pandemic,” the company said in a press release.

In addition, with the stance of aiding the American fashion industry impacted by the pandemic, Kering will support A Common Thread, the CFDA/Vogue Fashion Fund initiative, as well as ‘Your Friends in New York Want to Help,’ an organization launched by Kerby Jean-Raymond with a mission to create rapid local impact within the community.

These contributions follow those already made by Kering in France, Italy, and China in recent weeks and the production of more than million surgical masks and gowns for healthcare personnel.