Grand Seiko adds two new U.S. special edition models with nature-inspired dials to its Elegance collection. As two highlights among the brand’s June debuts, both new manual-wind watches exhibit beautiful handcrafted dials set within 39mm steel cases. Both are also powered by Grand Seiko’s superb Caliber 9S63 with a power reserve of seventy-two hours and an accuracy rate of +5 to -3 seconds per day.

One watch, reference SBGK015 Ryūsendō, is a limited edition of 250 watches and features a dial inspired by the blue and green underground lakes of the Ryūsendō located near Grand Seiko’s Shizukuishi Watch Studio. And while the color is certainly evocative of crystalline underground streams, it’s the dial’s curvy, patterned texture that catches my eye. Note how lines gather along the perimeter of the dial to create a gentle frame for the patchwork dial. 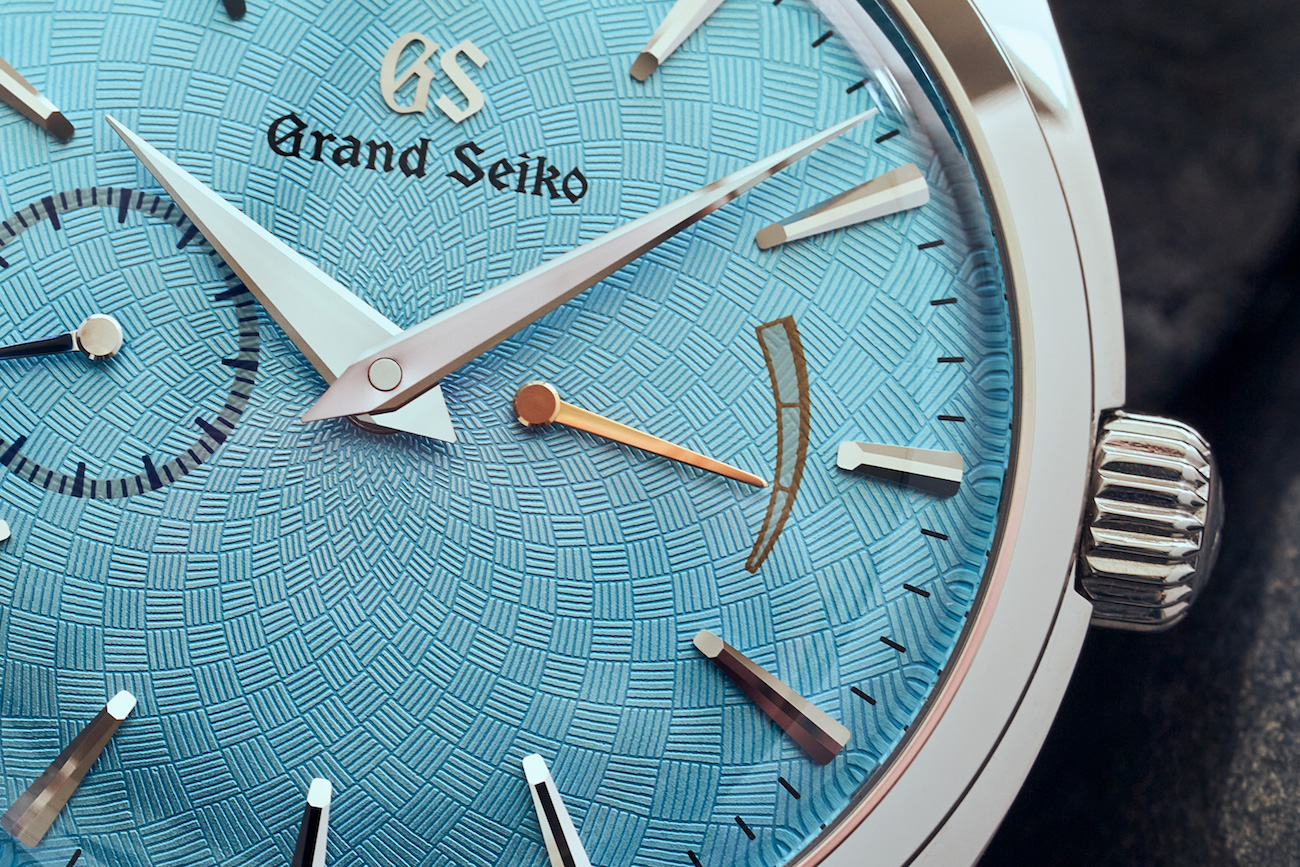 The second debut, Grand Seiko U.S. Special Edition SBGK017, is not a limited edition but will be made available within Grand Seiko’s ongoing Elegance collection in the United States.

Here Grand Seiko says it was inspired by Nanbu tekki ironware, a form of metalwork produced in the city of Morioka in Iwate prefecture. The tableware is prized for its distinctive texture called arare (hailstone) on its exterior. Grand Seiko artisans mimicked that texture on the watch’s dark gray dial. 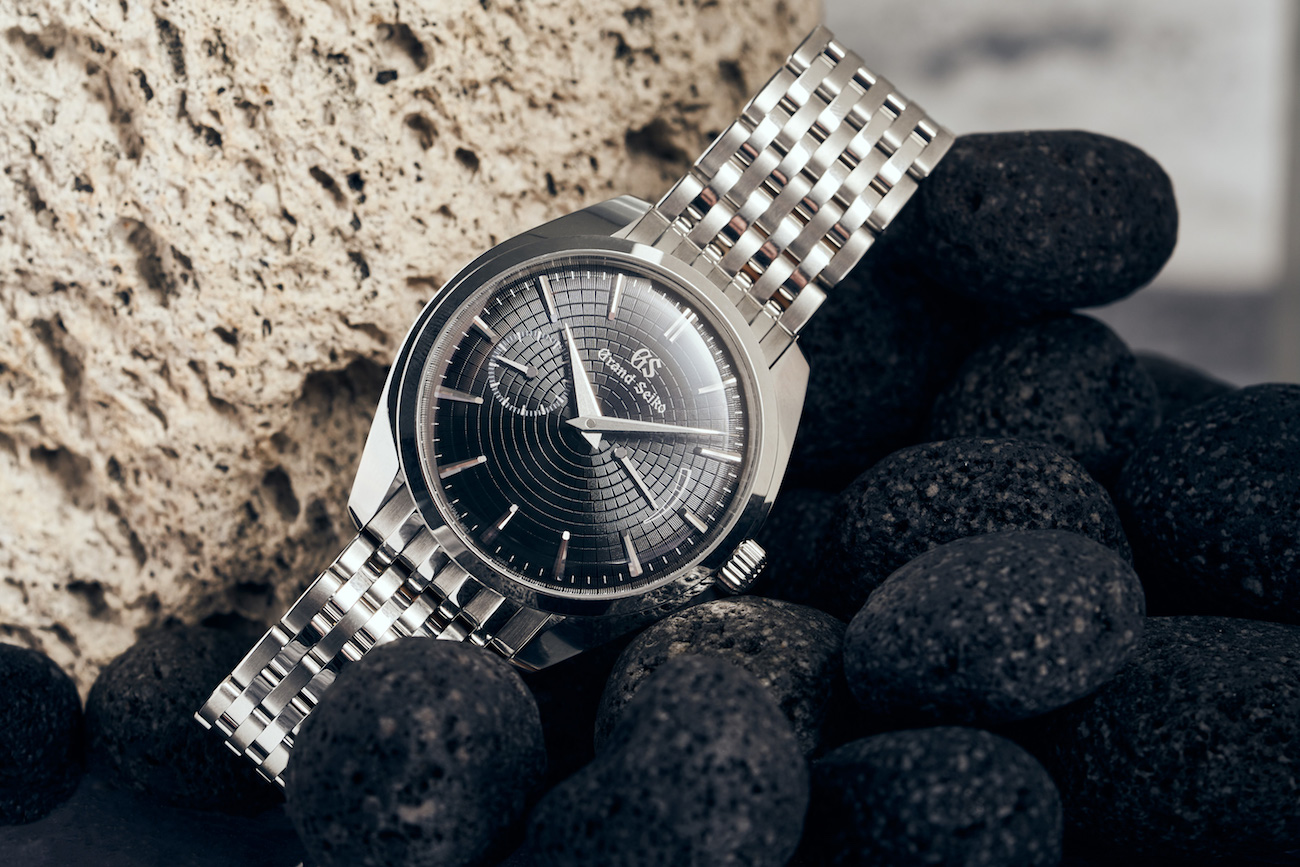 As manual-wind watches, both these debuts are thin and beautifully polished using Grand Seiko’s much-heralded Zaratsu method, which is specially tuned to highlight curved surfaces. Similarly, the dials and their sapphire crystals are also curved, with the minute and power reserve indicator hands shaped to follow the curve of the dial. 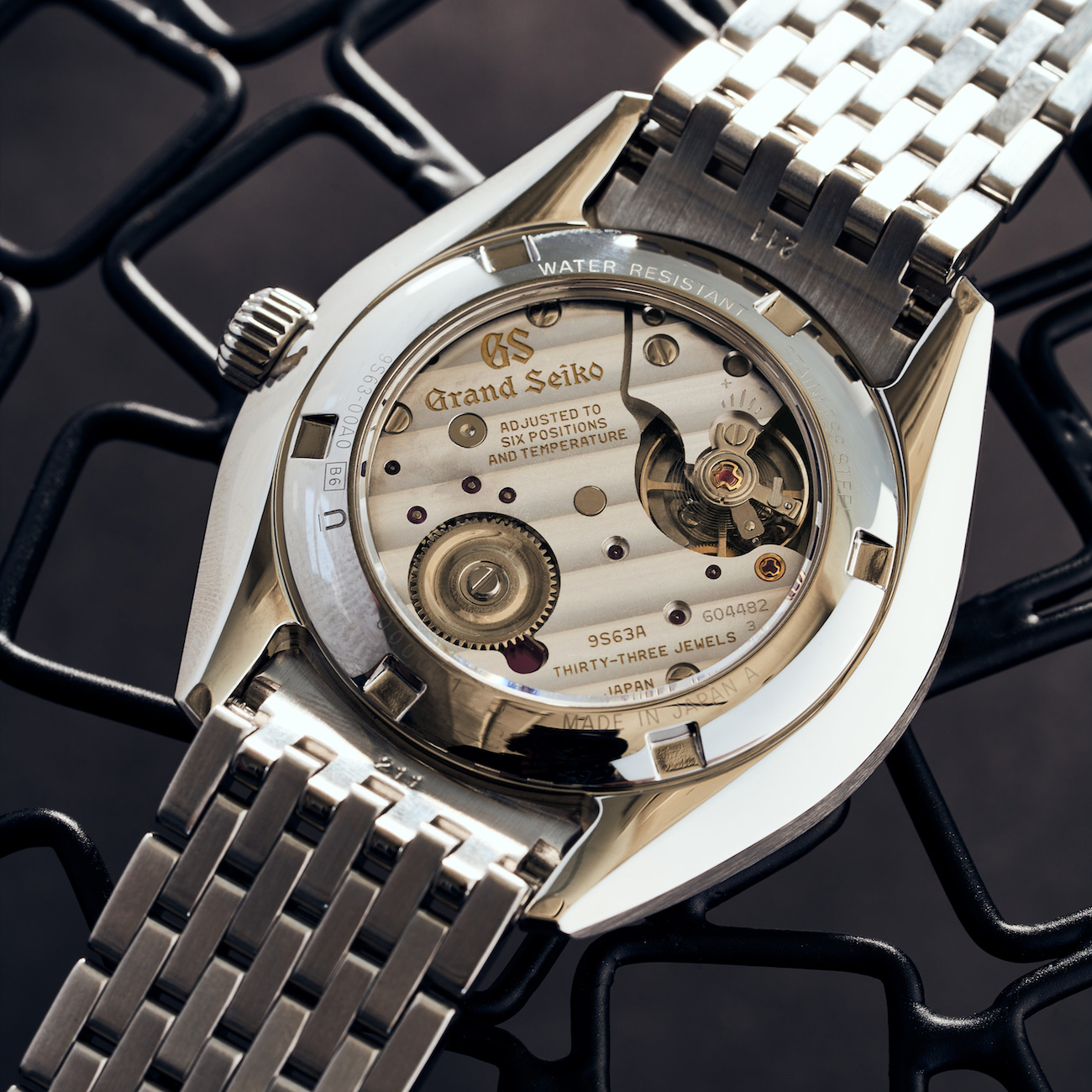 Both watches display a small seconds hand at the nine o’clock position and a power reserve indicator at three o’clock. +5 to -3 seconds per day (when static). The SBGK015 Ryūsendō and the U.S. Special Edition SBGK017 will be available starting in September at Grand Seiko Boutiques and selected retail partners in the United States. 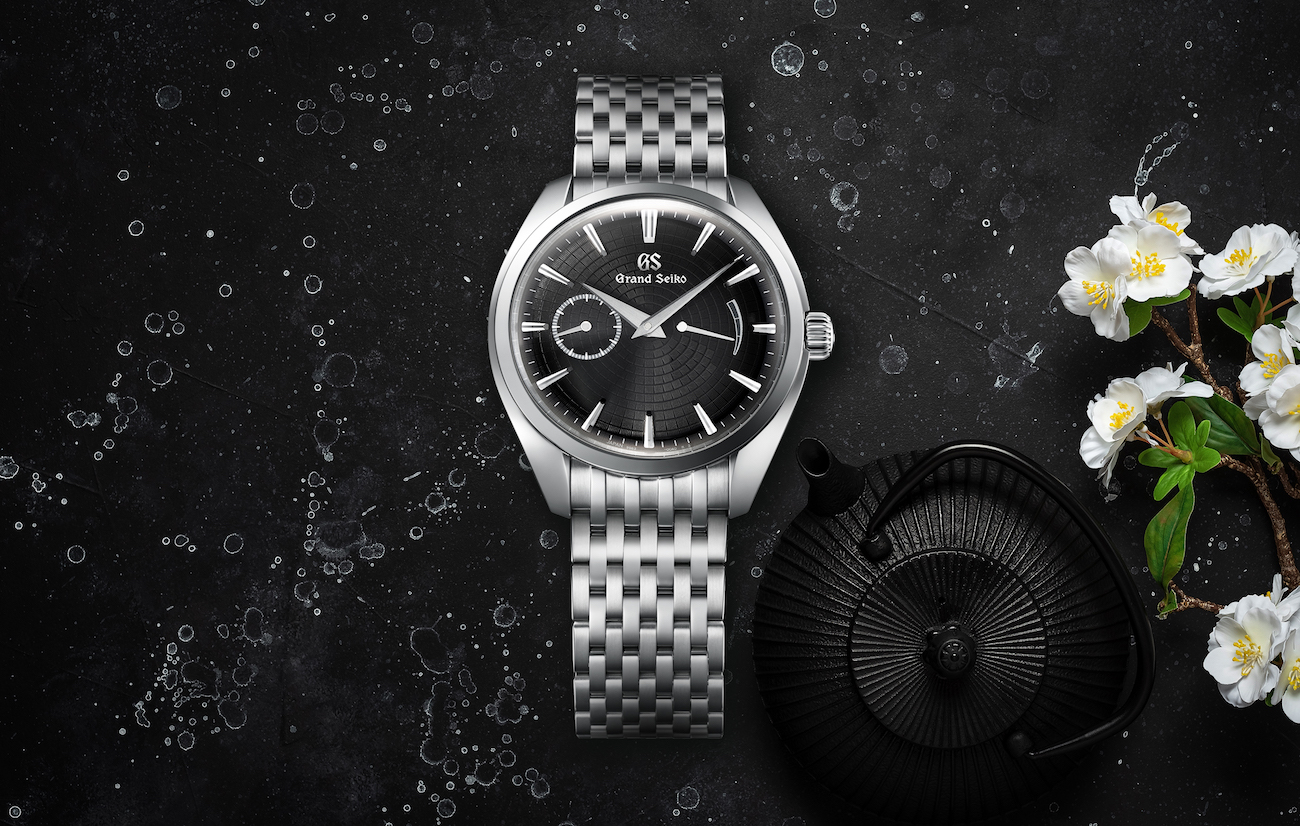 Norqain adds a blue dial limited edition model to its 40mm Freedom 60 GMT collection, one of the independent Swiss watchmaker’s most popular designs.

With its 1960s-style domed dial and an easy-to-read GMT scale in the center of the dial, the watch has serious vintage appeal. Norqain seals the appeal when it applies Old Radium SuperLuminova to the bronze hands, and frames it all with a bronze case. 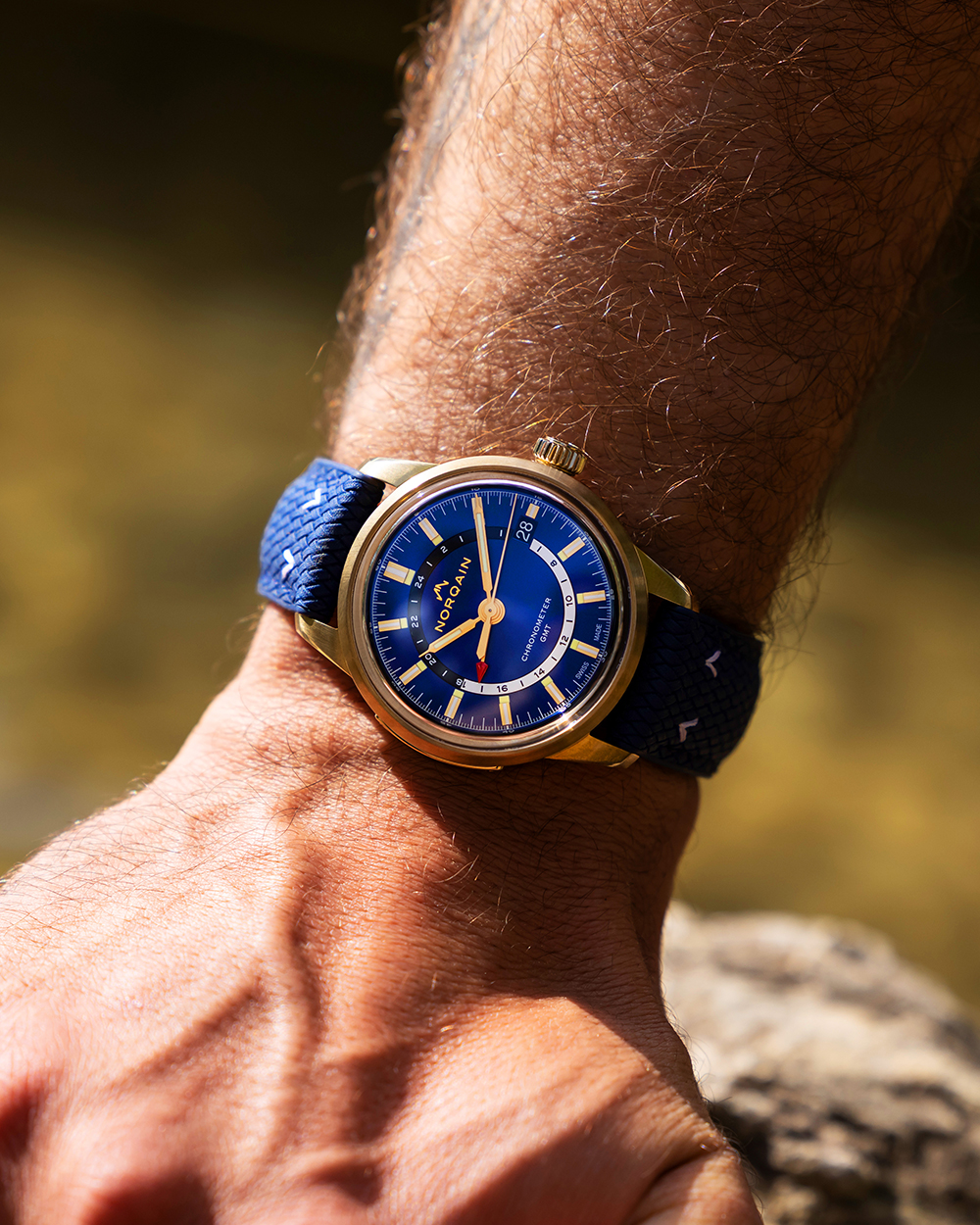 Norqain underscores all this retro eye-candy with appropriately modern technology, most critically the use of its chronometer-precise, in-house-designed Caliber NN20/2, an automatic movement (below) produced together with movement-maker Kenissi. The movement boasts a jumping hour to easily set the time and date forward or backward. Its long power reserve of seventy hours is among the most impressive we’ve seen at this price point. 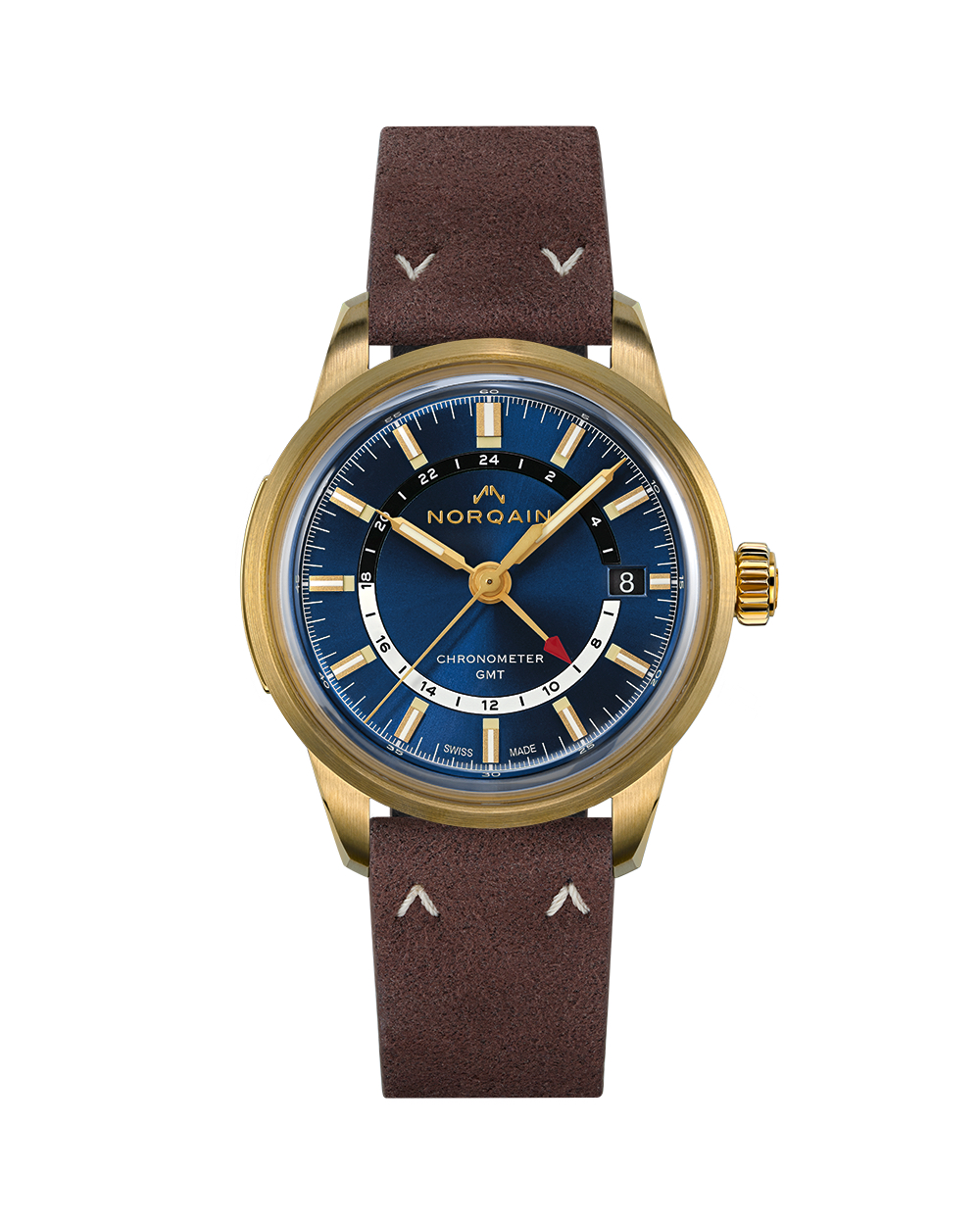 Also very up-to-date is Norqain’s decision to offer only non-leather straps or metal bracelets for all its watches. For this new model Norqain offers three different bracelet options, including a vegan-certified Perlon blue rubber strap with a pin clasp that matches the case. The watch is also available with Norqain’s own Nortide strap and an Alcantara strap, both of which include stitches that resemble mountaintops near the lugs. 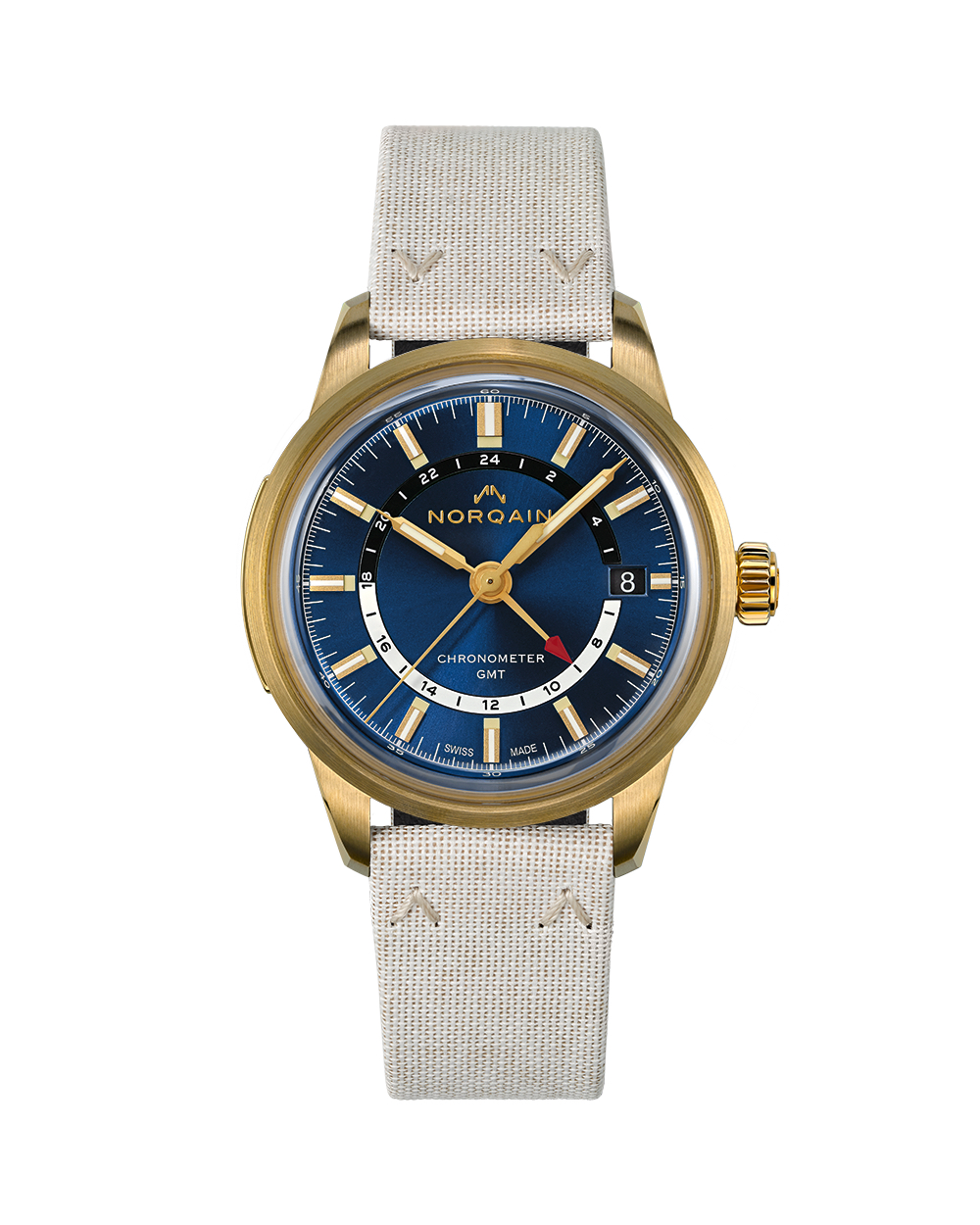 His design for the new watch allows the user to perform the same functions as a split-seconds chronograph. But overall, McDonnell focused the design for everyday use rather than specifically for sporting functions, according to MB&F’s Charris Yadigaroglou. Most of the new timing modes are novel to this design and not available when using a traditional chronograph. 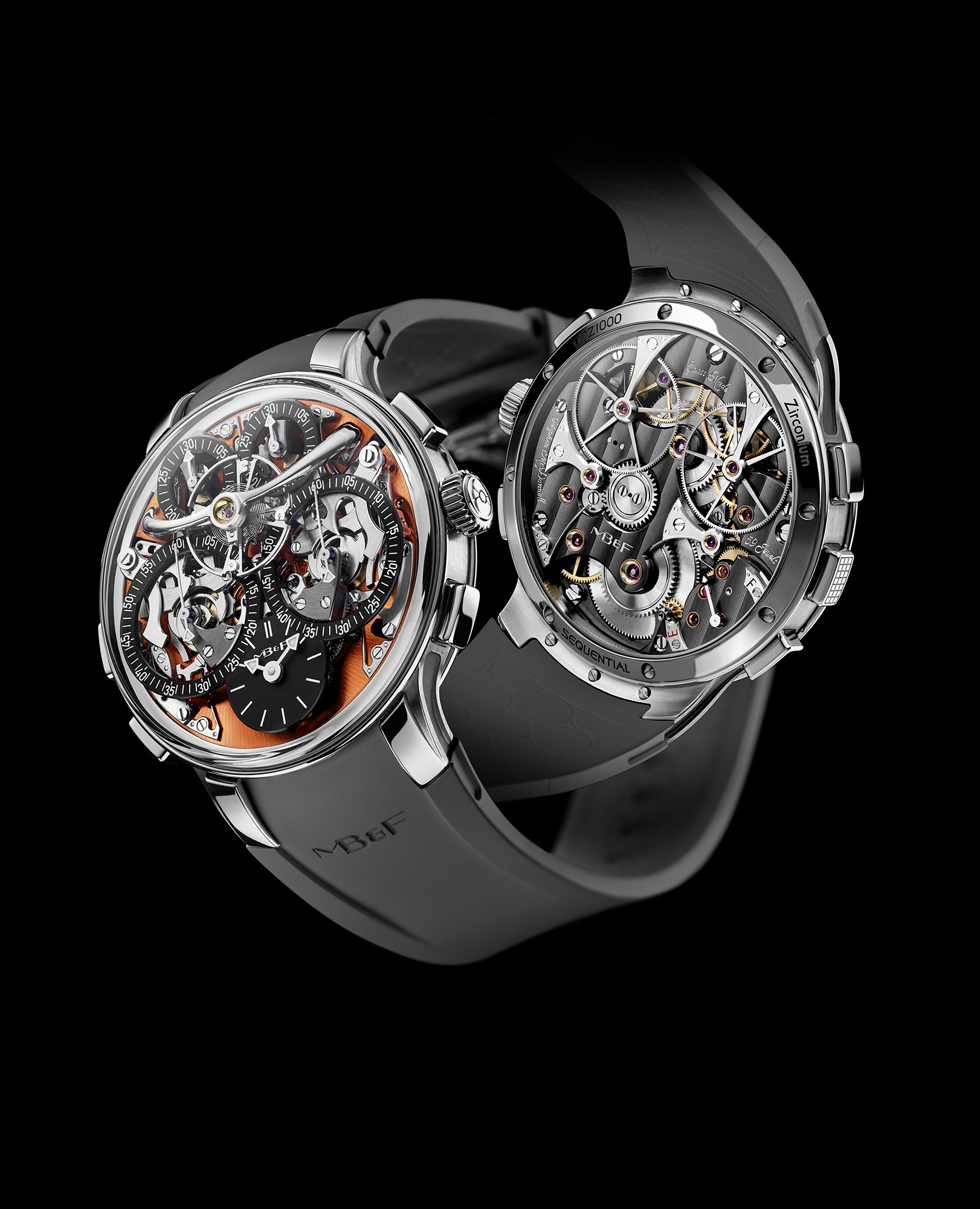 For example, in ‘independent mode’ the wearer can assist with varied cooking times. In this so-called ‘pasta mode” the wearer could operate the two chronographs via their respective pushers. One might start when placing pasta into boiling water and the other can separately time when vegetables go in the oven. Additional modes include Simultaneous mode, Cumulative mode and Sequential mode. MB&F places McDonnell’s caliber into its sporty EVO case much like the case that houses the latest example of the LM Perpetual. This is a 44mm by 18.2mm zirconium structure with no bezel, a domed sapphire crystal, a screw-down crown (offering 80 meters of water resistance) and MB&F’s own anti-shock FlexRing system. MB&F will launch the new watch in two versions. One features an ‘atomic’ orange CVD dial plate and the second features a ‘coal’ black PVD dial plate. Both come with an integrated rubber strap with a folding titanium buckle.   Price: $180,000. 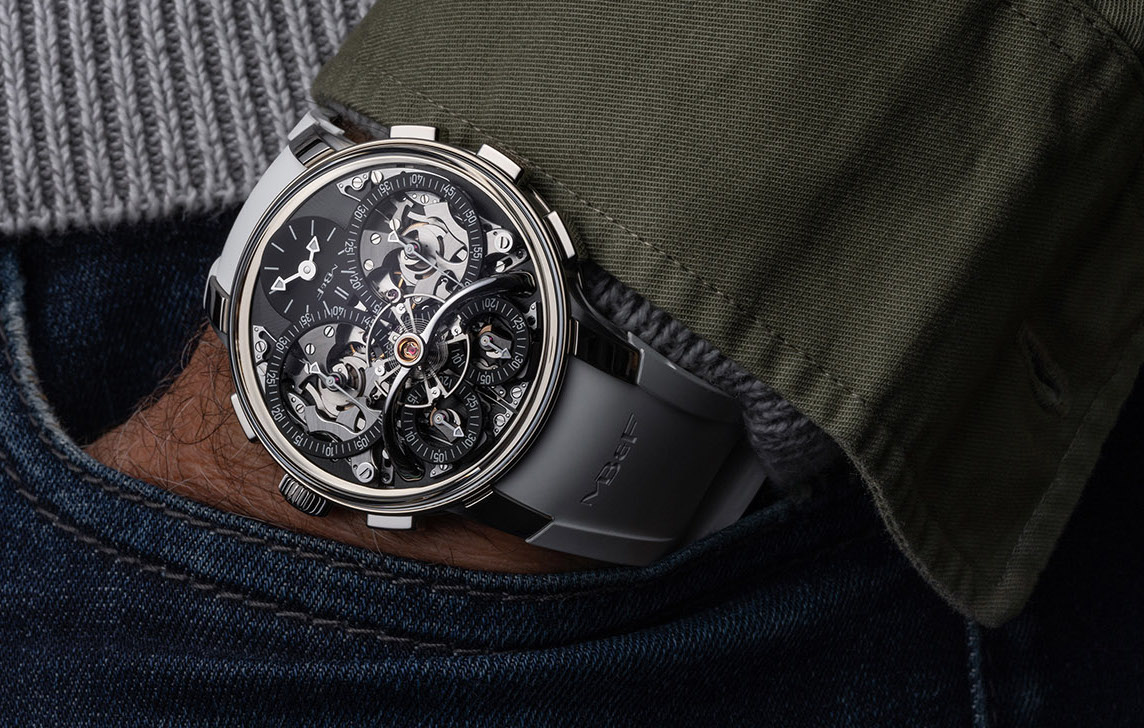 Dial: Galvanic black dials with Super-LumiNova on numerals and hands.

Left chronograph: Seconds displayed at 9 o’clock and minutes at 11 o’clock; start/stop pusher at 10 o’clock and reset at 8 o’clock.

Right chronograph: Seconds displayed at 3 o’clock and minutes at 1 o’clock; start/stop pusher at 2 o’clock and reset at 4 o’clock.

Twinverter pusher at 9 o’clock: binary switch that inverts the current start/stop status of both chronographs.

Case: 44mm by 18.2mm zirconium. Water resistance to 80 meters. Screw down crown. FlexRing annular dampener fitted between case and movement, providing shock protection along the vertical and lateral axes. Sapphire crystals on top and display back treated with anti-reflective coating on both faces.

Chopard builds the watch’s flying tourbillon without an upper bridge, which gives the regulating component its ‘flying’ moniker. That transparency in this L.U.C 96.24-L movement is based on the development of Chopard Manufacture’s first caliber (L.U.C 96.01-L from 1997). Like that caliber, the new movement also thin, measuring 3.3mm.

Thanks to this internal thinness, Chopard also built a thinner case than is typically found within the Alpine Eagle collection. The case on his new model measures 8mm thick, with a thinner bezel and lug set when compared to a classic Alpine Eagle Large model. Chopard also equipped this new movement with a stop-seconds function that is backed up with a chronometer certification by the Official Swiss Chronometer Testing Institute. (Note the “Chronometer” inscription on the dial below the logo.)

This double certification (COSC and Geneva Seal) places the Chopard Alpine Eagle Flying Tourbillon alone on the market (according to Chopard) as the only flying tourbillon watch receive both certifications.

The Chopard L.U.C caliber, like so many of Chopard’s excellent in-house movements, offers a much-welcomed long power reserve of sixty-five hours thanks to its two stacked barrels based on Chopard Twin technology. 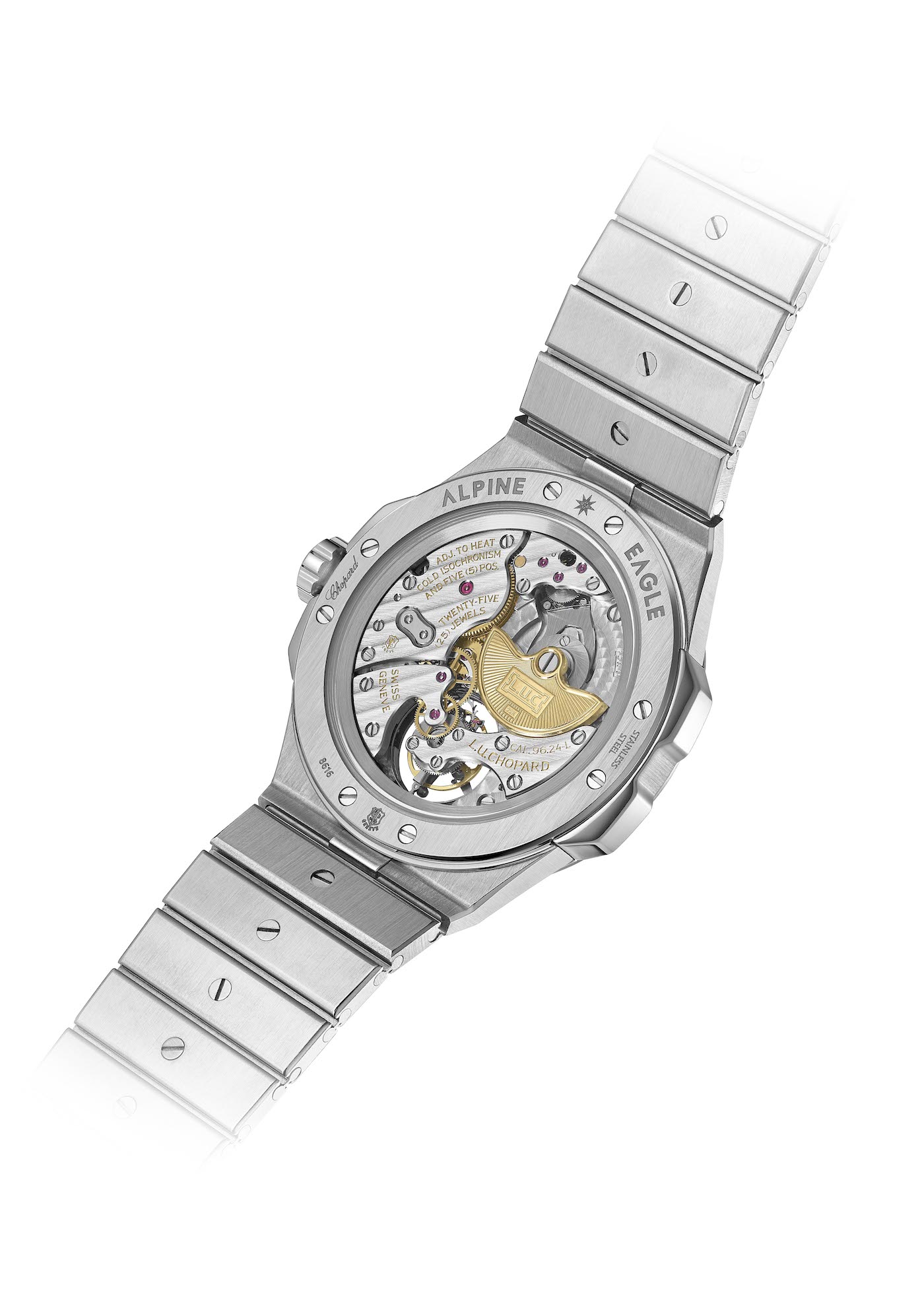 While Chopard has embedded unique characteristics into the new watch, the Alpine Eagle Flying Tourbillon still echoes all the Alpine Eagle collection’s overall profile, including a round case with stylized sides, a crown engraved with the compass rose, a bezel with eight functional screws set at a tangent, a stamped dial featuring a deep color (here textured blue on a gold base), luminescent indications, and a proprietary Lucent Steel A233 bracelet and case. Reservoir adds a new proprietary movement and a new silver-colored dial to its retro-styled Kanister jumping hour collection. The new movement, RSV-240, is made in association with long-time partner Telos, a Swiss motor manufacturer specializing in the tailor-made manufacture of high-end mechanical movements. 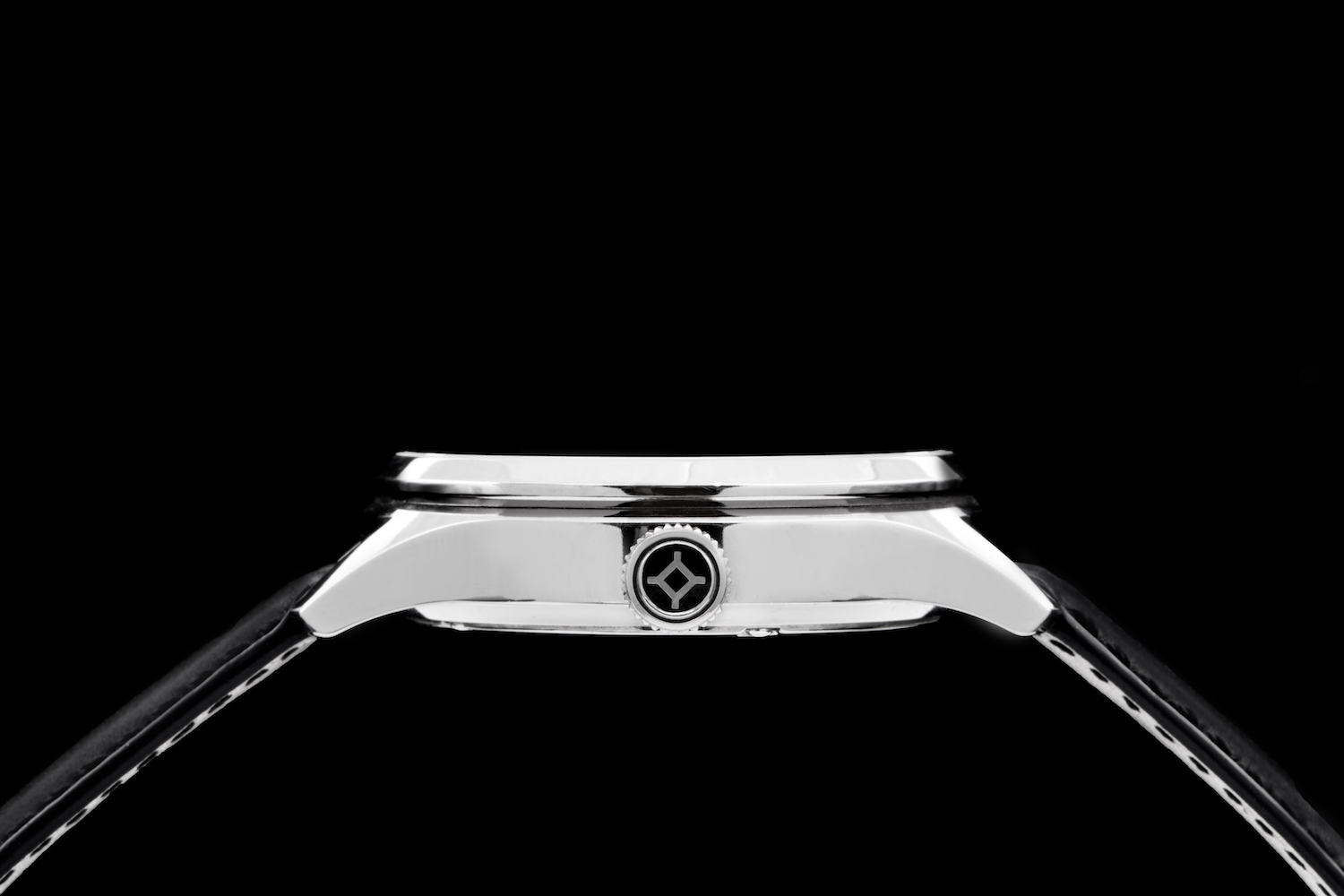 The new caliber updates the use of the Telos-made module (built on an ETA base) that Reservoir has long used to power its jumping hour watches. Reservoir introduces the new caliber in this Kanister Silver model and plans to add the movement to all its watches in the future.

With a dial designed to echo the RPM display of a 356 Speedster from the 1950s, the 41.5mm Reservoir Kanister Silver features silver-colored dial and indicators that display retrograde minutes teamed with a jumping hour aperture at 6 o’clock. Along the lower section of the dial you’ll see the automotive-themed power reserve display.