Swiss watchmaker Norqain expands its sporty Adventure collection with Neverest, three steel-cased 40mm watches equipped with the brand’s own COSC-certified automatic movement. Sales from all three models will benefit the Butterfly Help Project, which helps families of sherpas who have lost their lives in the Himalayan mountains and gives their children access to education.

The first debut, called Adventure Neverest 40mm Glacier, features a silvered dial with a brushed steel case and a grey bezel and dial.

The Glacier’s greys are punctuated with a few red accents on the central seconds hand and the Chronometer inscription. The dial pattern here is meant to resemble “the jagged crevasses of Khumbu Icefall, the most dangerous stage of the climb to Everest’s summit,” according to Norqain. 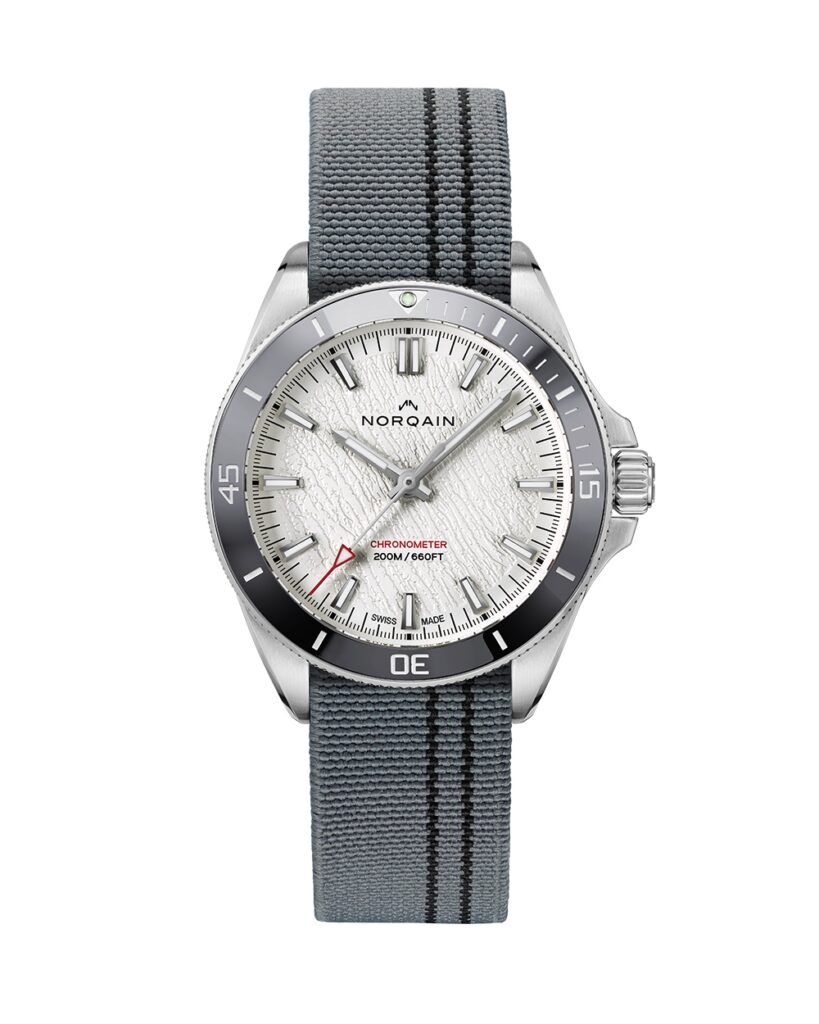 Norqain is quick to note that it has coated all the watch’s markers and hands with a supercharged version of SuperLuminova said to be 60% stronger than the standard stuff.  And appropriate to the watch’s sporty profile, Norqain has also nicely knurled the bezel’s edges to make rotating the unidirectional bezel a simpler chore.

The remaining two debuts sport Norqain’s own block-link pattern dial with different color schemes and framed by a choice of a steel case or a steel case with red gold bezel. 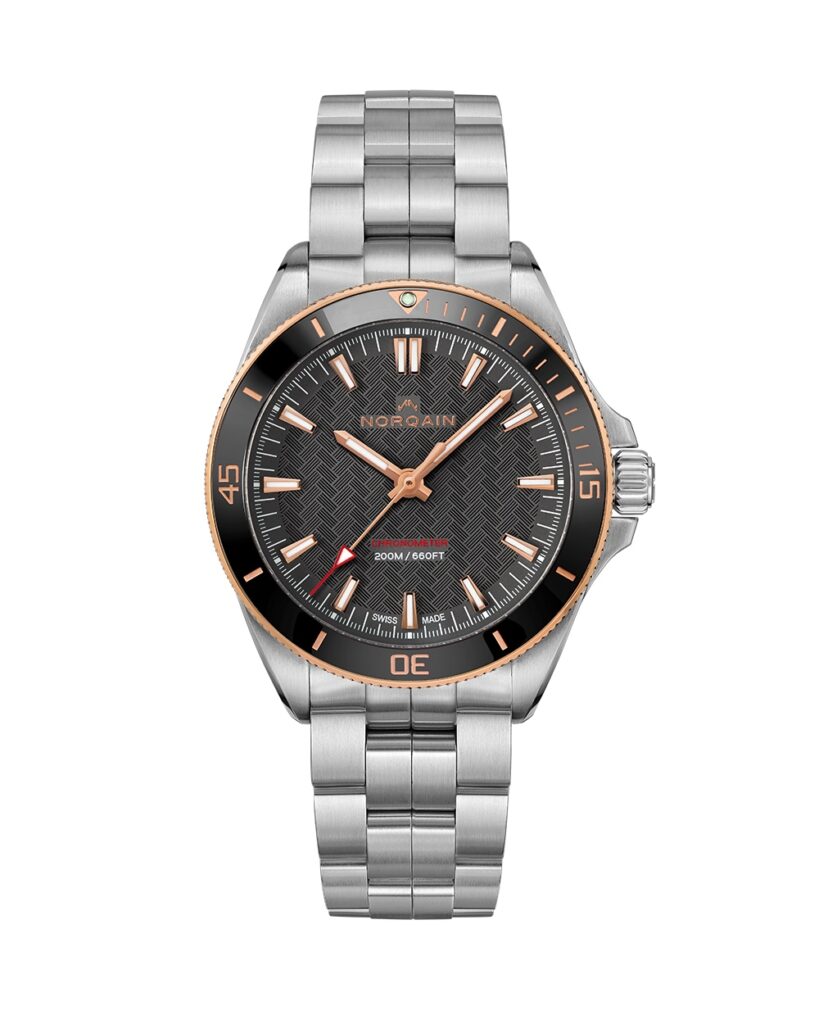 The latter model, with a slightly dressier steel and gold combination, is limited to 100 pieces, which Norqain has engraved on the watch’s caseback. The watch’s red gold bezel is topped with a black ceramic ring. Options here include a textured black rubber strap with the same knurled style as the bezel ($4,380), a steel bracelet with an additional security clasp ($4,580), or a flexible fabric strap ($4,380).

Finally Norqain offers a sportier version of the watch with an outdoor-themed forest green and black patterned dial. 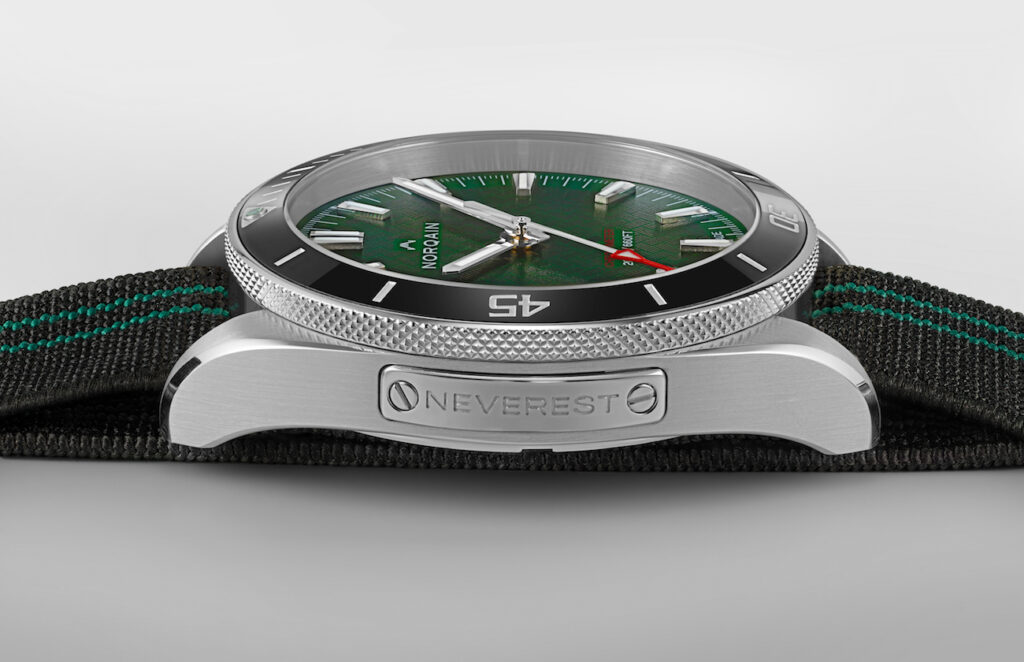 The watch’s steel bezel also offers a black ceramic ring. Like its limited edition counterpart, this model is available with a stainless steel bracelet ($3,190), a black rubber strap ($2,990) or a flexible fabric strap ($2,990). 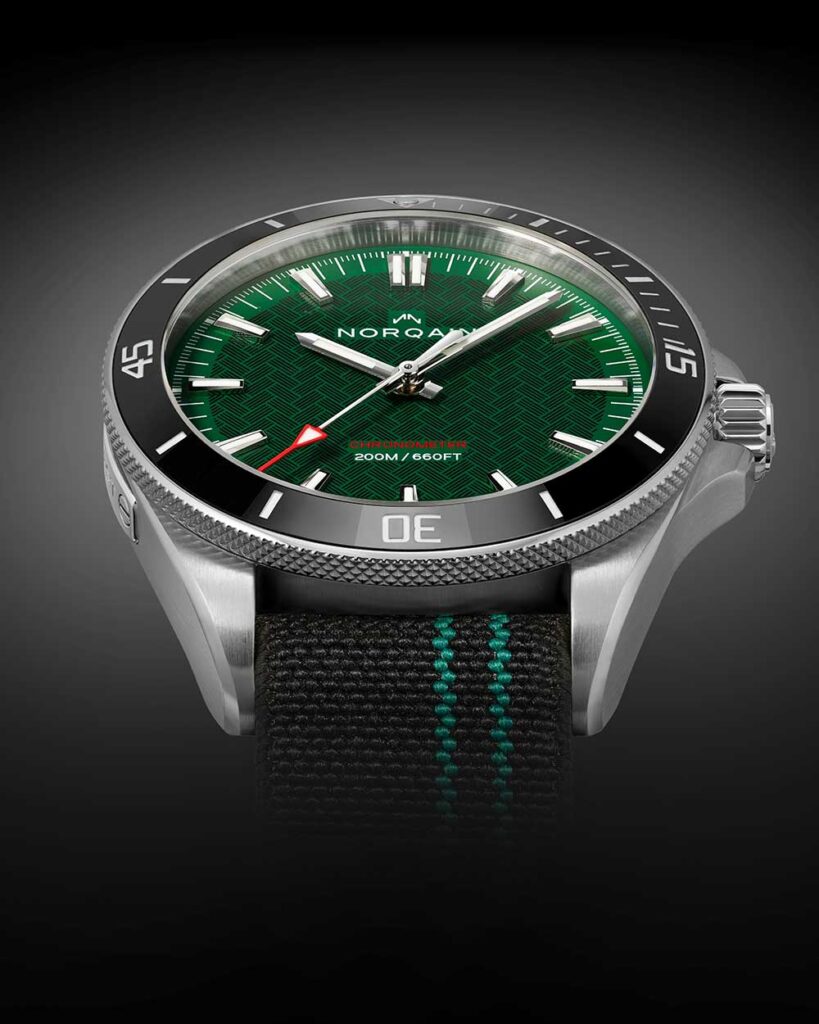 Given this brand’s pedigree, with executive links to both Breitling and Tudor, we’d expect a focus on serious caliber technology, and that’s what Norqain delivered in February 2020 when it launched Calibers NN20/1 and NN20/2. Both calibers are being produced in partnership with Kenissi, a mechanical movement manufacturer founded by Tudor.

The movements are extra shock resistant, COSC-certified and offer a power reserve of seventy hours. All three Neverest models are water resistant to 200 meters.

The retro-styled 39mm Black Bay Fifty-Eight, which quickly became a Tudor best seller after it debuted in 2018, traces its lineage back to Tudor dive models from the early 1950s, with most of its features linked to the Tudor reference 7924 from 1958, known as the Big Crown edition.

Gone are the gilded touches to the markers, bezel and the hands we saw on the Black Bay Fifty-Eight from two years ago. Here Tudor replaces those accents with sportier steel on the dial and silver-colored markers and numerals on the bezel, perfectly matching the case and bracelet. 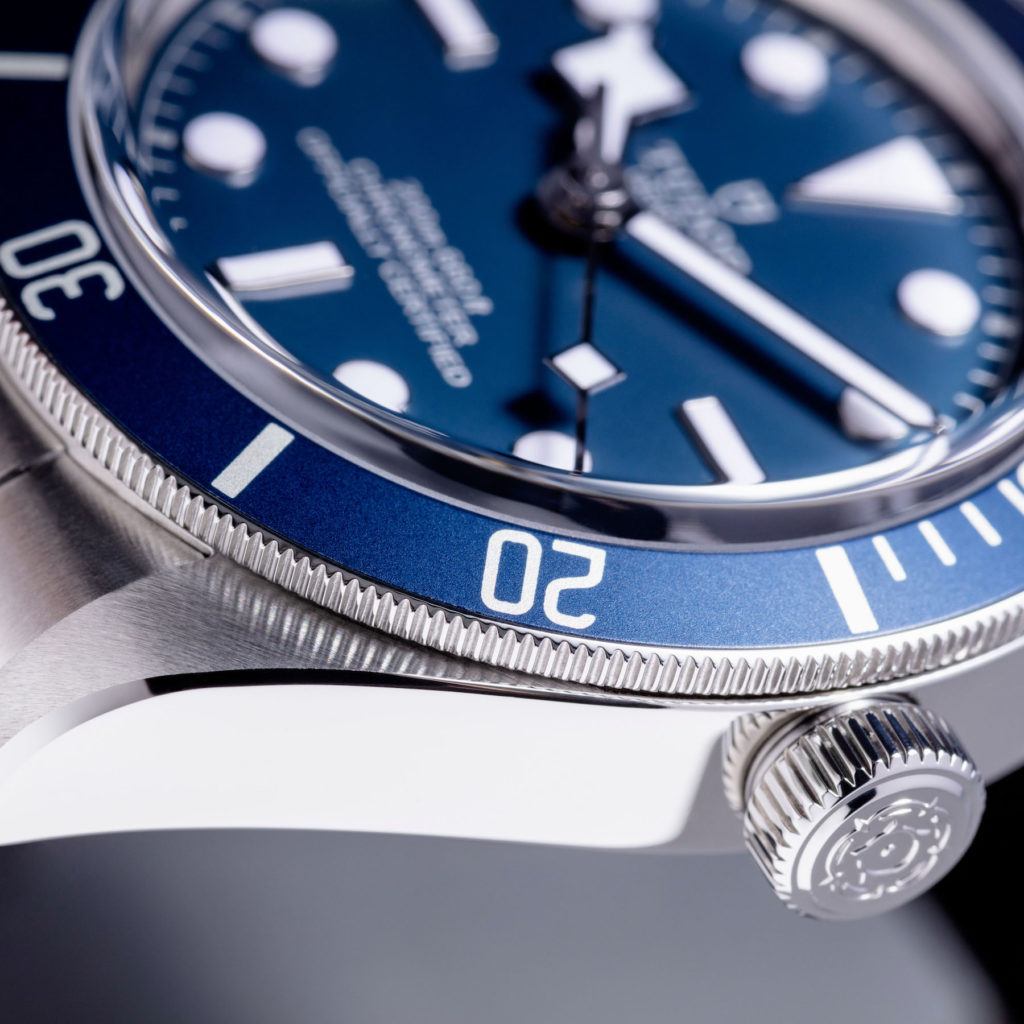 As with the 2018 black-dialed edition, the new Black Bay Fifty-Eight Navy Blue inhabits its retro style while steeped in modern technology, most notably underneath its dial. There you’ll find an in-house Tudor Caliber MT5402, an automatic caliber with a non-magnetic silicon balance spring and an impressive seventy-hour power reserve.

Tudor notes that its caliber, tailor-made by Tudor for the 2018 Black Bay Fifty-Eight, performs with greater precision than its official COSC chronometer certification requires. Where COSC allows for an average variation in the daily running rate of a watch movement of between -4 and +6 seconds in relation to absolute time, Tudor says it applies a tolerance of between -2 and +4 seconds’ variation in its daily rate on the assembled watch. 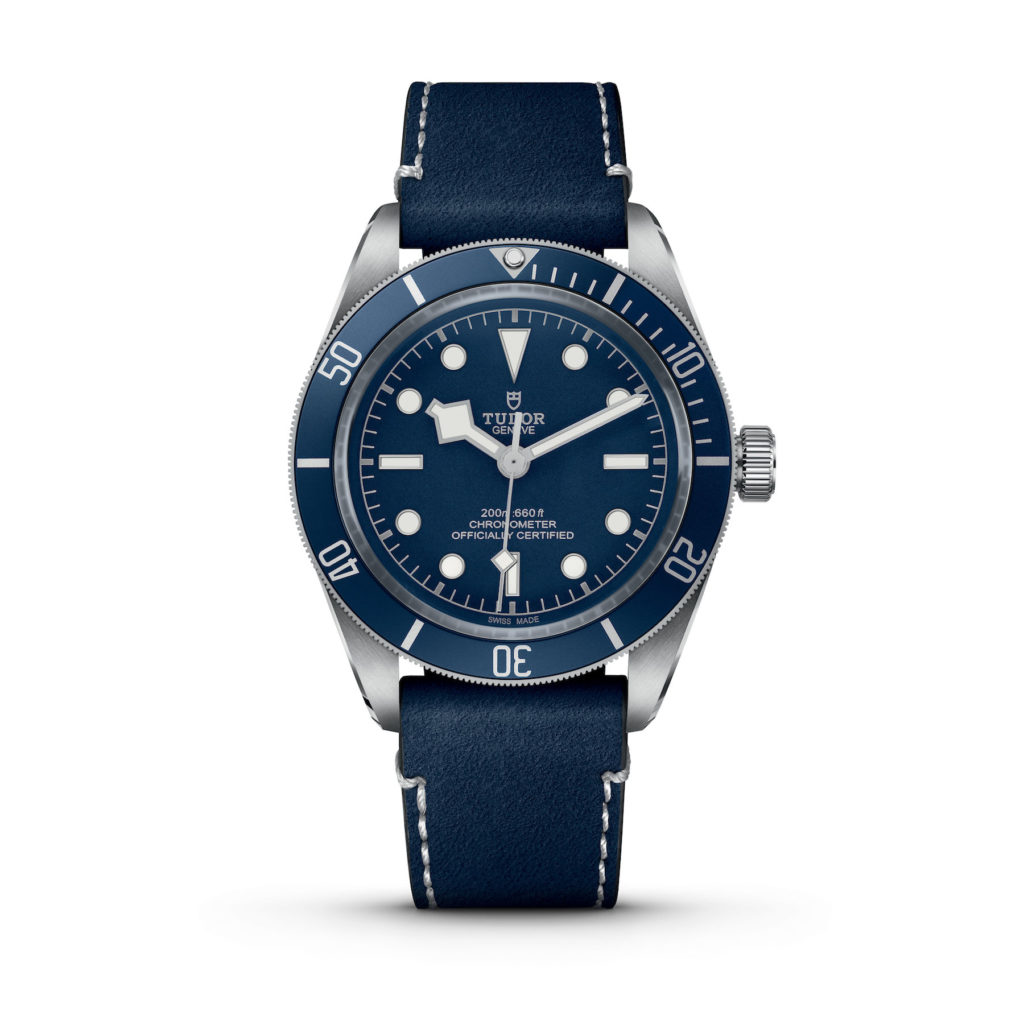 While the front and even the sides of the new watch recall their origins in the 1950s and 1960s (notably regarding the Snowflake hands, seen first in 1969), the closed caseback gives away the game with engraved references to the manufacture caliber within. 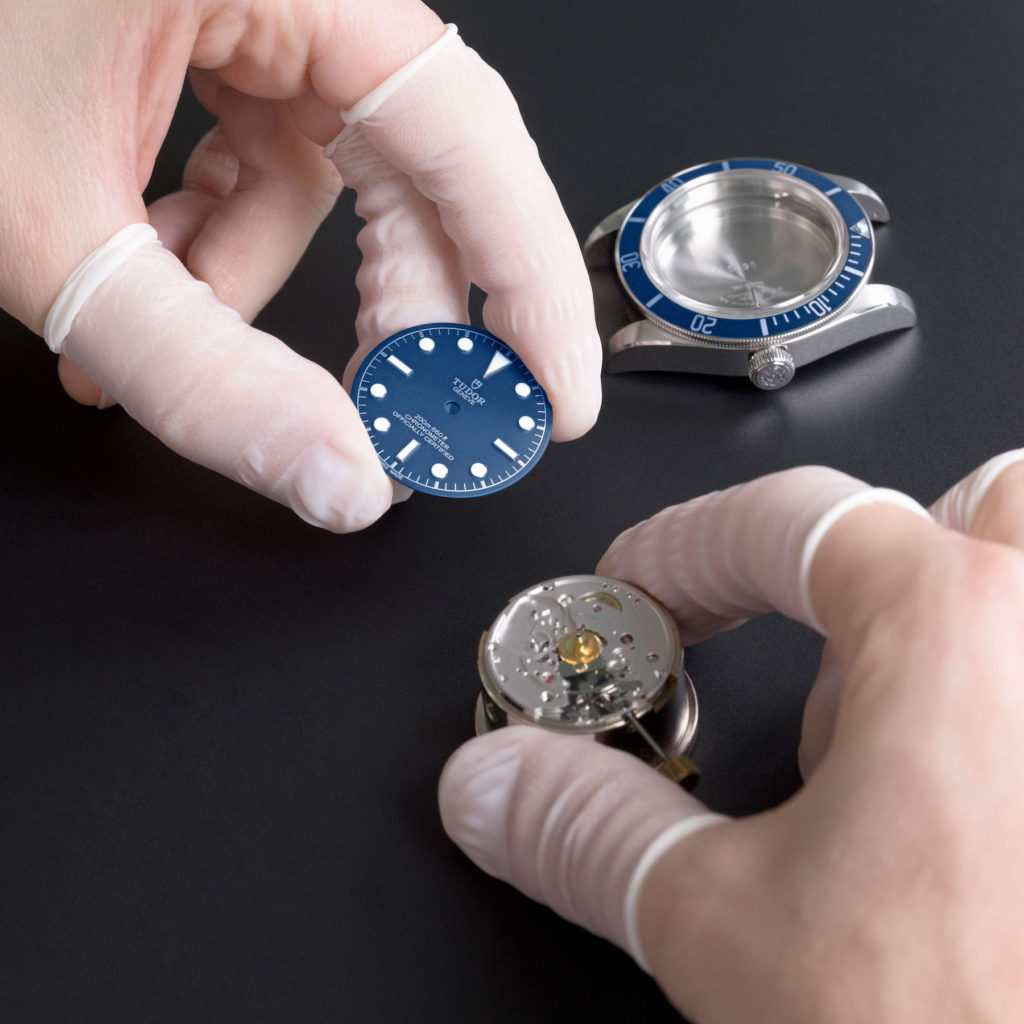 Unscrewing the back, a watchmaker (or intrepid owner) would see a distinctly modern finish on the MT5402 caliber, notably a one-piece tungsten rotor that Tudor has open-worked, satin-brushed and sand-blasted. Tudor also alternates sand-blasted surfaces, polished surfaces and laser decorations on the movement’s bridges and mainplate. 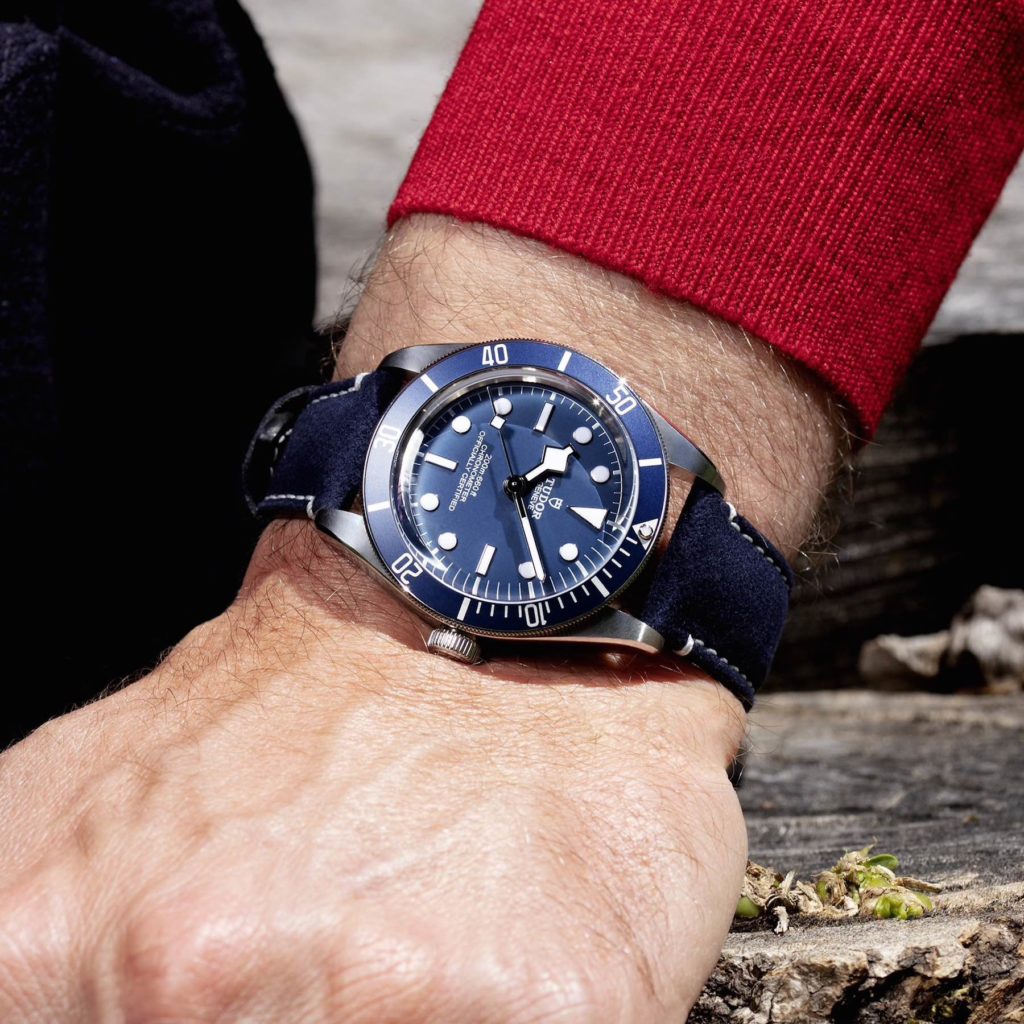 Those familiar with Tudor will know that its modern identity, and its success, is in part due to its unerring facility with fabric NATO-style straps, which the brand has embraced wholeheartedly since at least 2010. 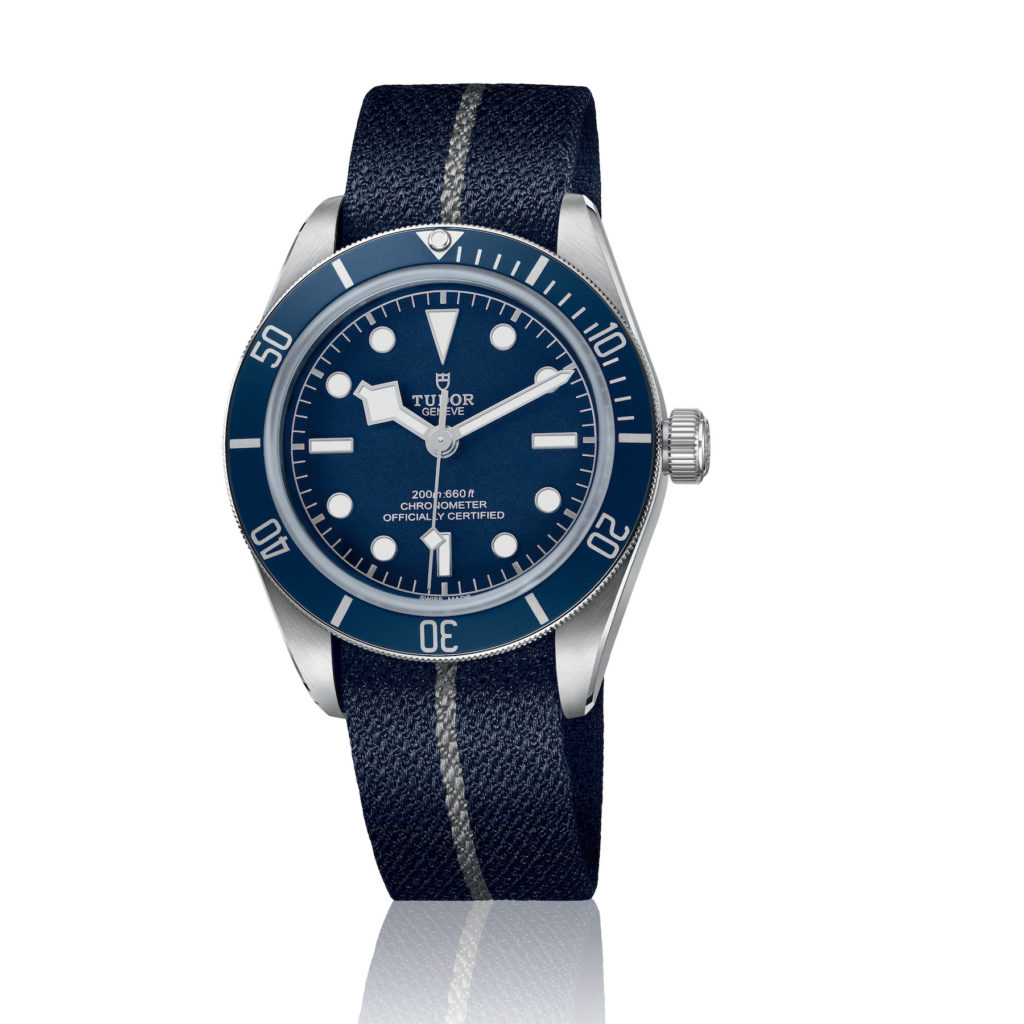 Tudor continues that tradition with the new Black Bay Fifty-Eight Navy Blue, for which Tudor offers a handsome navy blue and silver-striped woven fabric strap (above) made in France by Julien Faure, a 150-year old family company. Tudor also offers a riveted steel bracelet (polished and satin finish) with folding clasp and safety catch and a blue “soft touch” strap with folding buckle and safety clasp.

The remaining Tudor-curious collectors who were not sold on the 2018 Black Bay Fifty-Eight’s slightly luxe black and gold accented dial and bezel back in 2018 have their watch with this new Black Bay Fifty-Eight Navy Blue. It’s sportier, beautifully blue-hued and supplies the same Tudor high-value mechanicals teamed with expert retro dress.

With the same pricing as the earlier model ($3,700 for the bracelet model and $3,375 for fabric strap), the watch serves up no visible obstacles to any motivated fan.