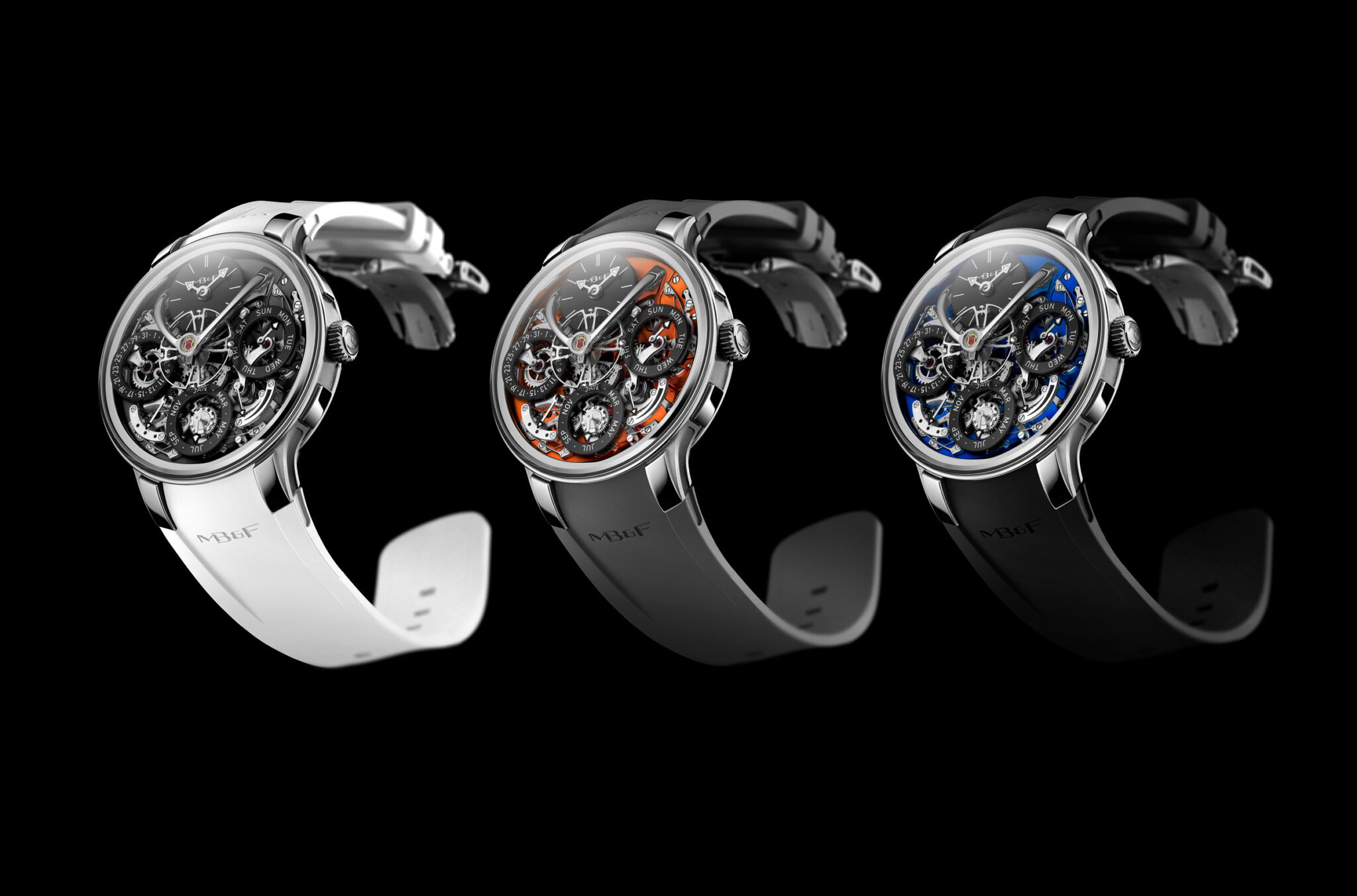 The new watch, which MB&F debuts today, is an exuberant, ultra-tough version of its innovative and GPHG-award-winning Legacy Machine Perpetual (from 2015) that MB&F has now dressed in a new case and outfitted with enhanced shock resistance and increased water resistance.

Cased in lightweight zirconium, an extremely durable silvery-grey metal frequently used by medical instrument makers, the new watch immediately differentiates itself from the earlier LM Perpetual by displaying no bezel. Instead, MB&F has fused the watch’s domed sapphire crystal directly to the 44mm case. 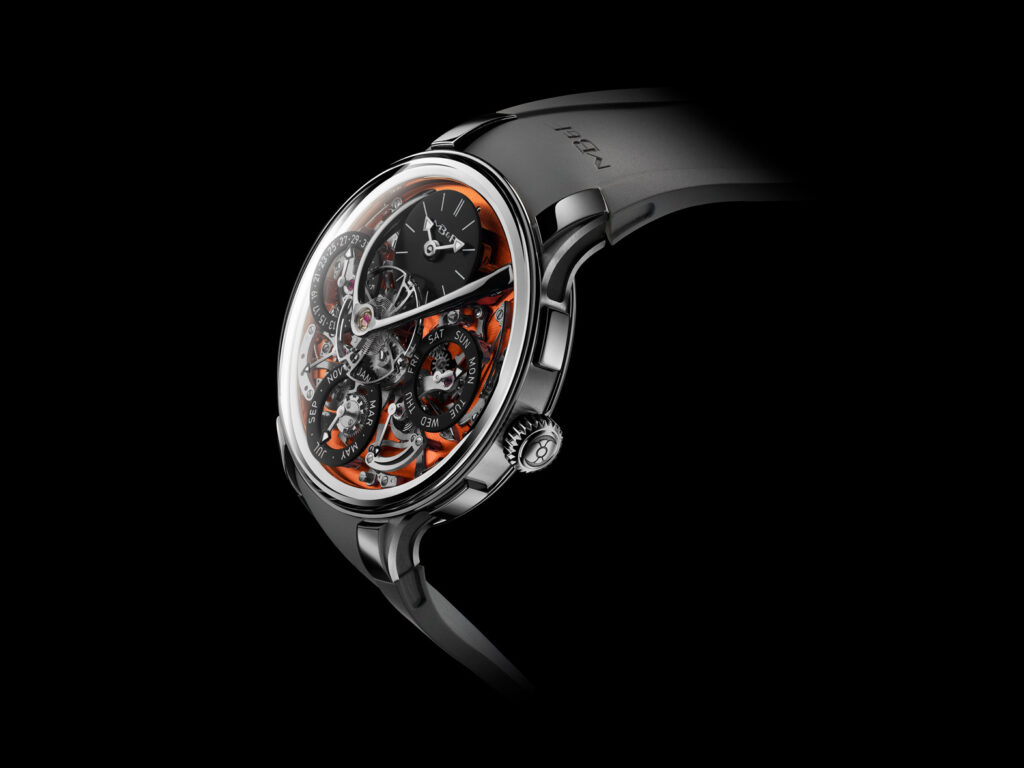 This re-configured case/crystal configuration opens up the wearer’s view of the watch’s eye-catching, hovering balance wheel, a signature MB&F design element. But more than that, the new design also decreases the watch’s overall height-to-diameter ratio, which can reduce the chances of accidental impact to the crystal. 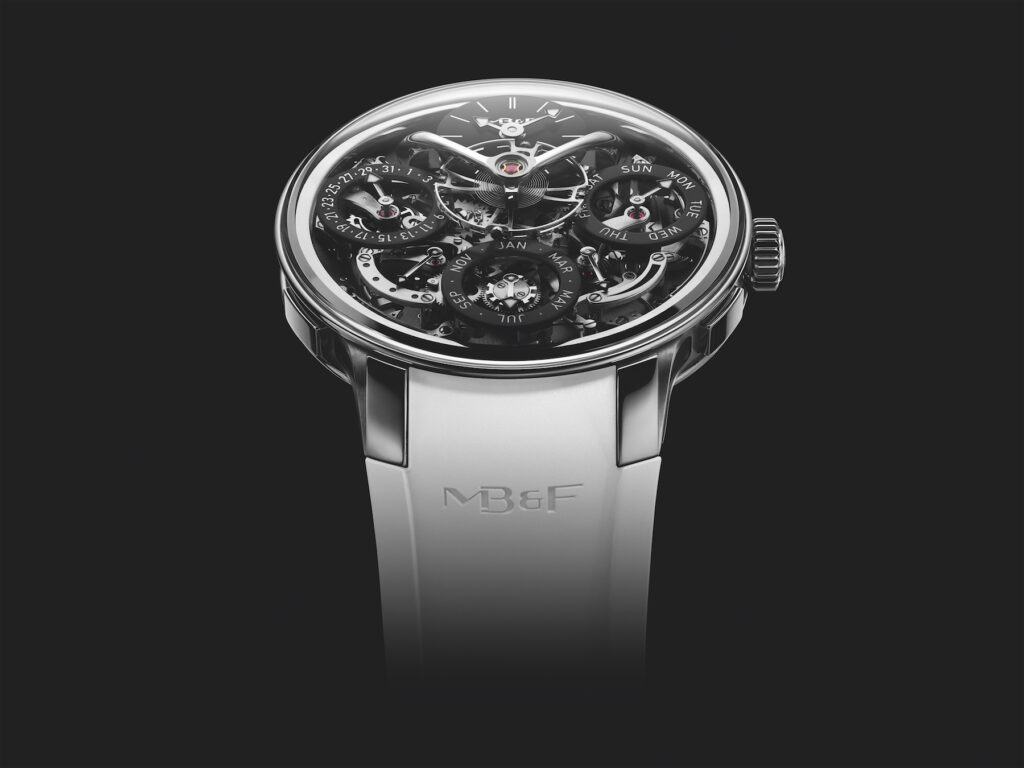 Zirconium, while difficult to machine, makes for a particularly lightweight case; it also features enhanced hypoallergenic and anti-microbial properties.  MB&F has only used zirconium to case two previous watches, the HM3 Frog and HM5. 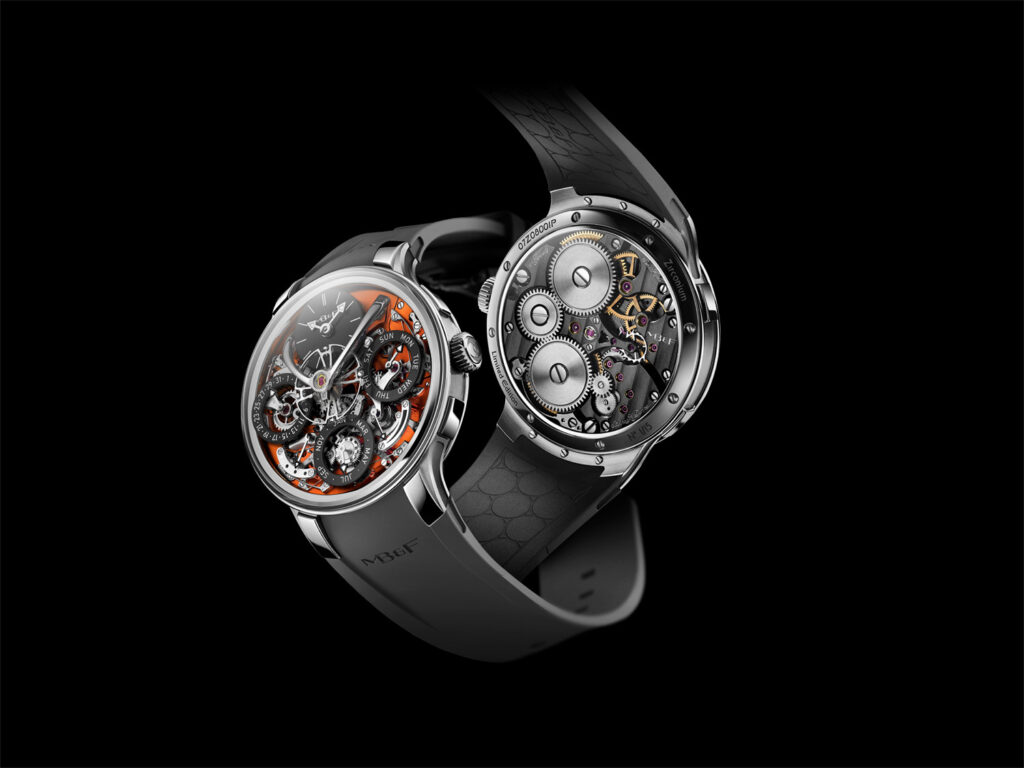 Perhaps the most critical addition to the original perpetual calendar’s movement design is a one-piece stainless steel dampener called the FlexRing. MB&F fits this new round component between the watch’s case and movement to enhance shock protection along the vertical and lateral axes.

According to MB&F, the new component “makes for the most robust Machine ever to emerge from MB&F.” 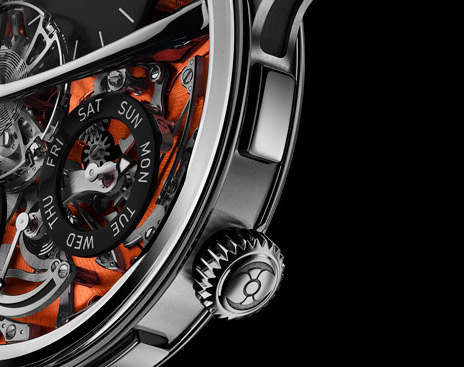 In addition to these adjustments, MB&F has transformed the watch’s pushers, which are larger and oblong instead of small and round, and has enhanced the water resistance of the crown (which is now screw-down) on this updated perpetual calendar. The sleeker pushers in particular signal the EVO’s sportiness. 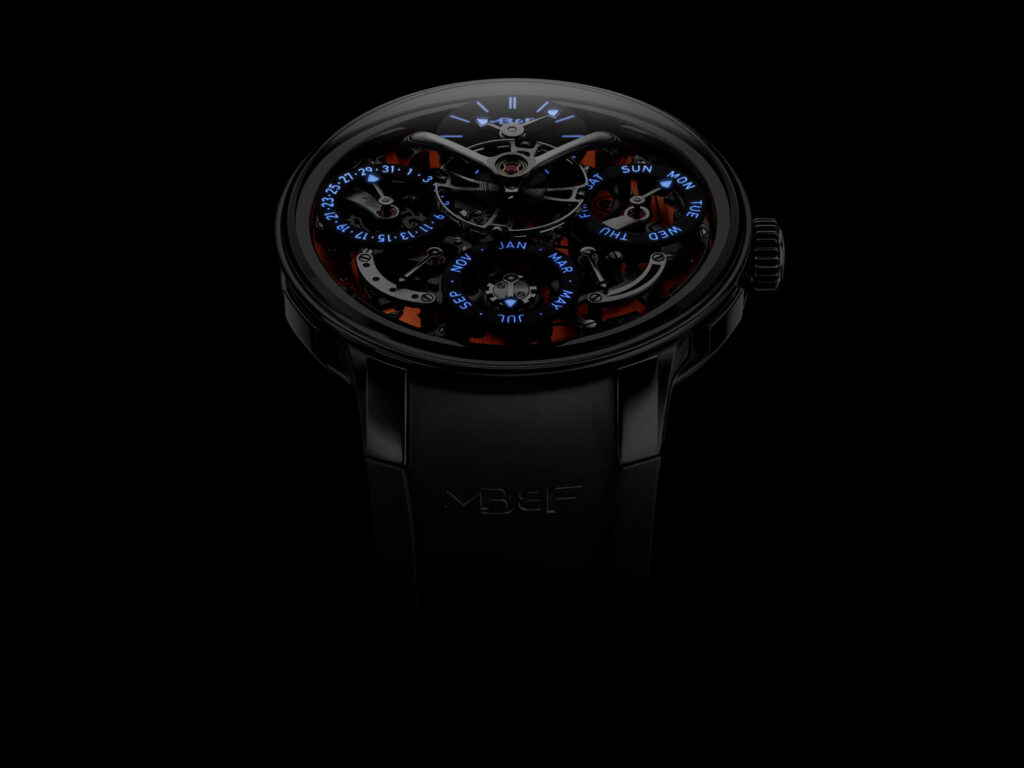 To increase the watch’s water resistance to 80-meters MB&F has connected the crown to a new type of winding stem that disengages the crown from the winding mechanism when it is pushed in and tightened. This also prevents the wearer from over winding the mainspring barrel.

As a reminder, Stephen McDonnell effectively redesigned the traditional perpetual calendar when he first devised the LM Perpetual for MB&F five years ago.

McDonnell built the LM Perpetual with a “mechanical processor” (a series of superimposed disks) that takes the default number of days in the month at 28 and then adds the extra days as required by each individual month. This removes the chance that the date will jump incorrectly. He also built in a safety feature that disconnects the pushers during the date changeover to eliminate any risk of damage to the movement when the date is changed.

In addition to bolstering the shock and water resistance of its perpetual calendar, MB&F is also emphasizing the LM Perpetual’s EVO’s sporty nature with new movement plate PVD or CVD colors and a rubber strap that fits snugly between two polished lugs.

One of three plate color options, dubbed Atomic Orange, is new for MB&F. The watchmaker says it has devised a new coating material and CVD coating technique that allowed it to add this sporty hue to its component color options.

MB&F is offering two other dial-plate colors, PVD black and CVD blue, for the LM Perpetual EVO and is producing each of the three shades in a limited series of fifteen pieces (in celebration of the brand’s 15th anniversary). Strap colors are white, grey and black. Price: $167,000.

Case: 44mm by 17.5 mm zirconium, water resistance to 80 meters, sapphire crystals on top and display back treated with anti-reflective coating on both faces