The new watches are the first additions to the U.S.-based watch company’s collection in 2022. Heritage Sportline is Waldan’s signature sporty series. Each watch is constructed with a double-stepped 40mm by 8.6mm 316L stainless steel case with a domed, anti-glare sapphire crystal and fifty meters of water resistance. (Readers might recall our review of one Waldan watch earlier last year, as well as our look into the company’s history in 2020.) The new Heritage Sportline models feature eye-catching dials executed in Olive Khaki, Royal Blue and Champagne. The oil-pressed, linear style dials feature SuperLuminova above their baton-styled applied markers and show the time with matching baton hands with luminous tips. A sunken sub-seconds register can be found at the 6 o’clock position. 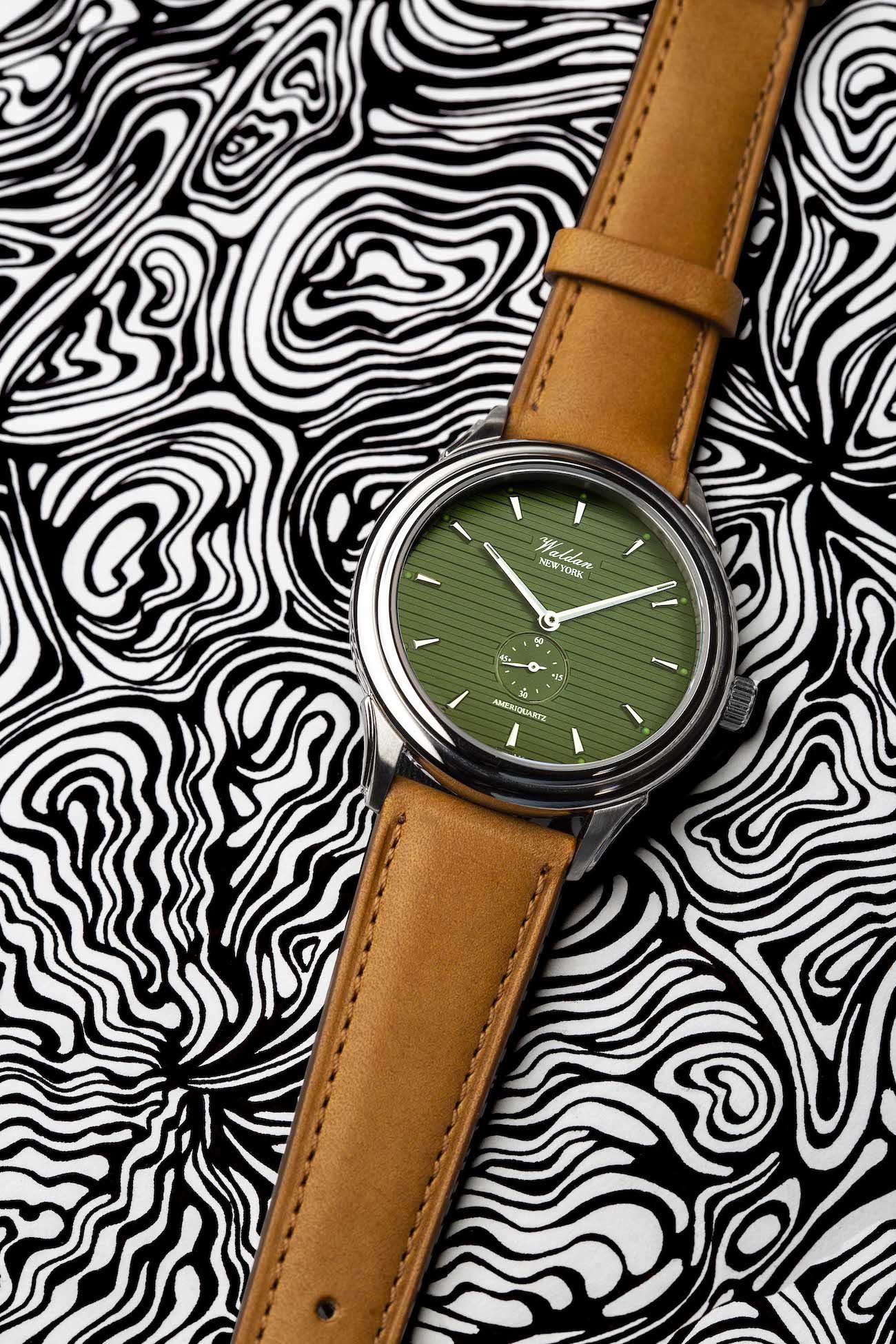 Waldan’s interchangeable straps are made in Italy. While the straps attached to these new models are matched to the dial, Waldan presents the wearer with the option of purchasing additional straps to mix and match as desired. The extra straps are $30 and available from the Waldan website. Waldan continues to power each watch in this series with an all-metal American-made Ameriquartz Caliber 70200 movement. Fine Timepiece Solutions, the Arizona-based manufacturer of the Ameriquartz movements, guarantees that its all-metal calibers are defect-free for a full five years. Price: $299. 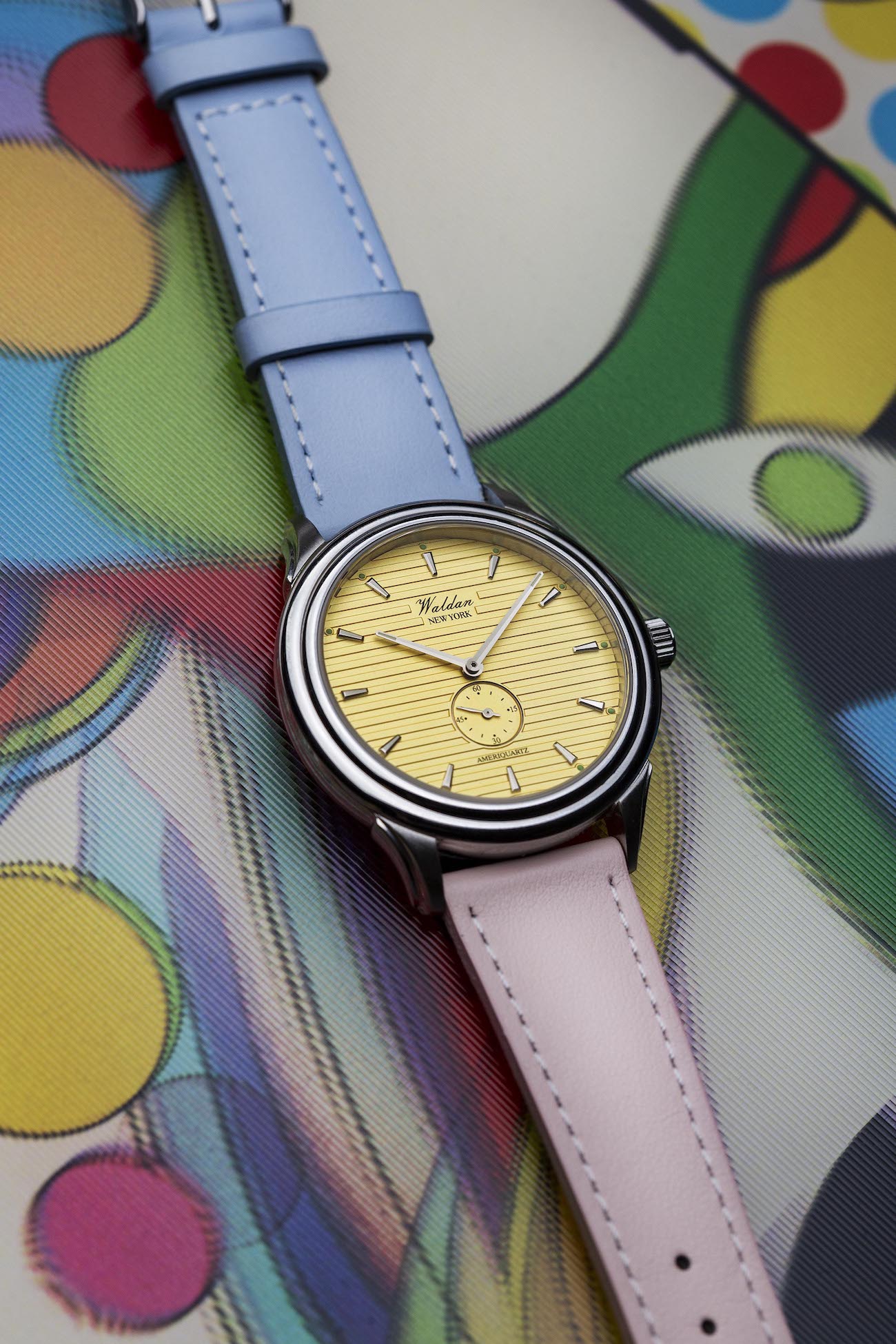 Offered as limited edition of 100 pieces in each of three colors, the new Waldan Bright Pastel series retains the high-value allure of the Heritage Professional line, but now adds a colorful twist with a choice of pink, yellow or light blue dials.

Hand crafted in Italy, these straps add a matching finish to any watch in the series, and present the wearer with the option of purchasing additional straps to mix and match as desired. The straps are $30 and available from the Waldan website. Waldan continues to power each watch in the series with an all-metal American- made Ameriquartz Caliber 70200 movement. Fine Timepiece Solutions, the Arizona-based manufacturer of the Ameriquartz movements, guarantees that its all-metal calibers are defect-free for a full five years. Price: $299. (Three colors, each limited to 100 pieces)

During these past few weeks, eyeing my wrist has been pleasurable – and relaxing. I’ve been wearing a Waldan Heritage Professional watch with an off-white dial, and this 40mm watch’s clean time-only face requests very little from my brain. I’m lulled by its familiar, soft color and plainspoken display, which immediately registers the hour, minutes and seconds…and then seems to back off.

Dress watches typically require only admiration from wearers and observers, and on that front Waldan’s classic design here clearly succeeds. And it’s not simply the open, track-free dial that delivers a clear message. 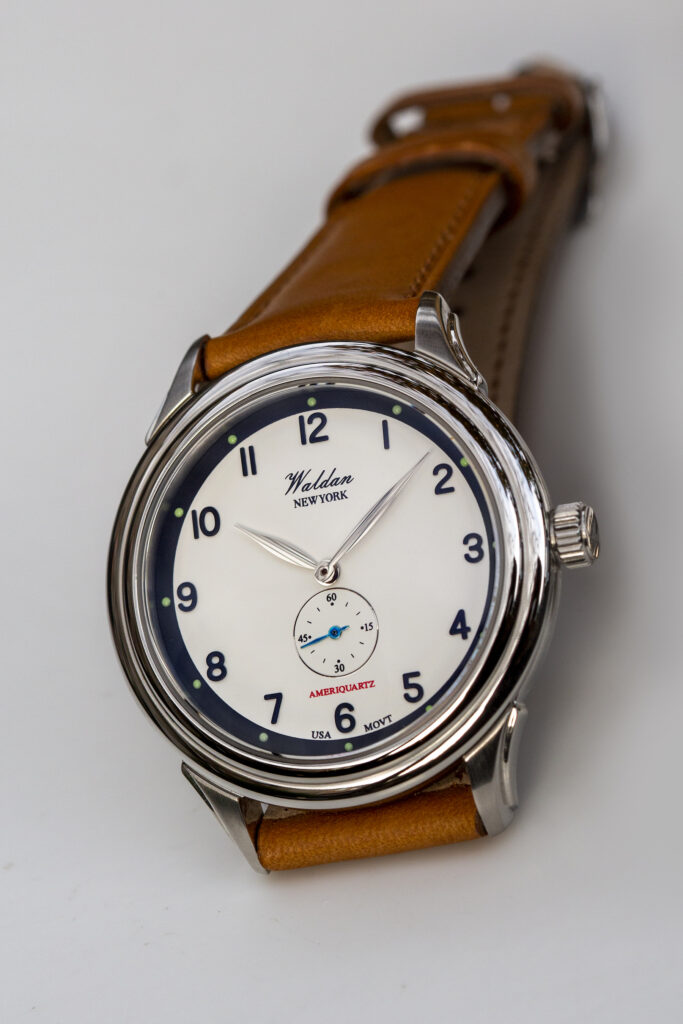 Waldan nicely frames all the Heritage Professional cases with a polished, two-level round bezel. These curves continue onto the relatively small, lightly brushed lugs that only slightly offer contrast to the watch’s polish. 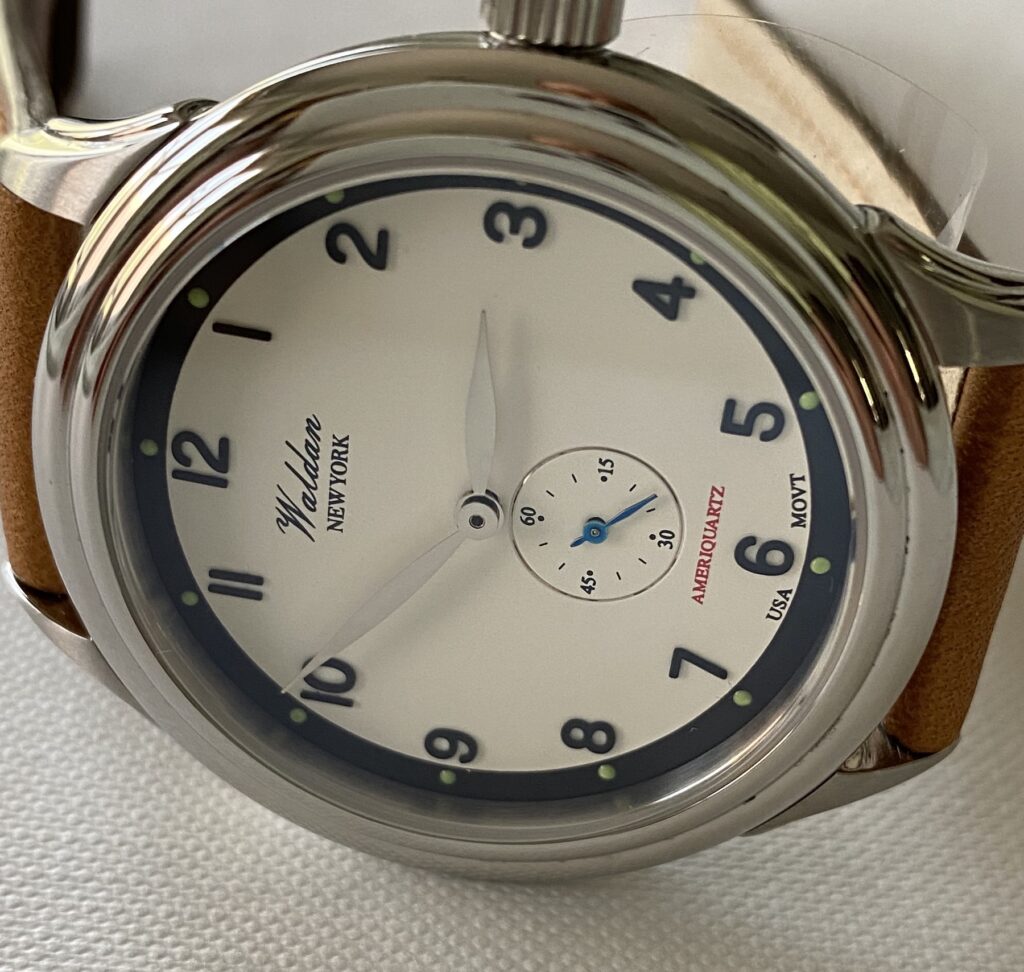 That pleasing contrast, along with the blue seconds hand and the red ‘Ameriquartz’ logo, nicely accent the watch overall, but are careful to not overwhelm the eye. The luxurious Ambra Elbamatt leather strap, on the other hand, betrays Waldan’s strong sense of fashion, which is more blatant on the collection’s green-dial option.

But there’s more to the Waldan Heritage Professional than meets the eye­ – literally.

While you won’t see the Ameriquartz caliber inside the watch’s closed case, you’ll know that it will power the watch’s hands flawlessly for years.

Fine Timepiece Solutions, the Arizona-based manufacturer of the Ameriquartz movements that power all the newest Waldan watches, guarantees that its all-metal calibers are defect-free for a full five years. (In fact, as a founding member of FTS, iW Publisher Gary Girdvainis will attest to the ultra-high manufacturing processes that result in these movements. Just ask him.)

The fairly slim caliber means that Waldan’s entire Heritage Professional collection maintains a dress-watch-thin 8.6mm from top to back. This size means the 40mm case diameter seems a smaller on the wrist, which is preferable for a dress model. My Waldan fit effortlessly onto my small-ish wrist. It was comfortable at all times. 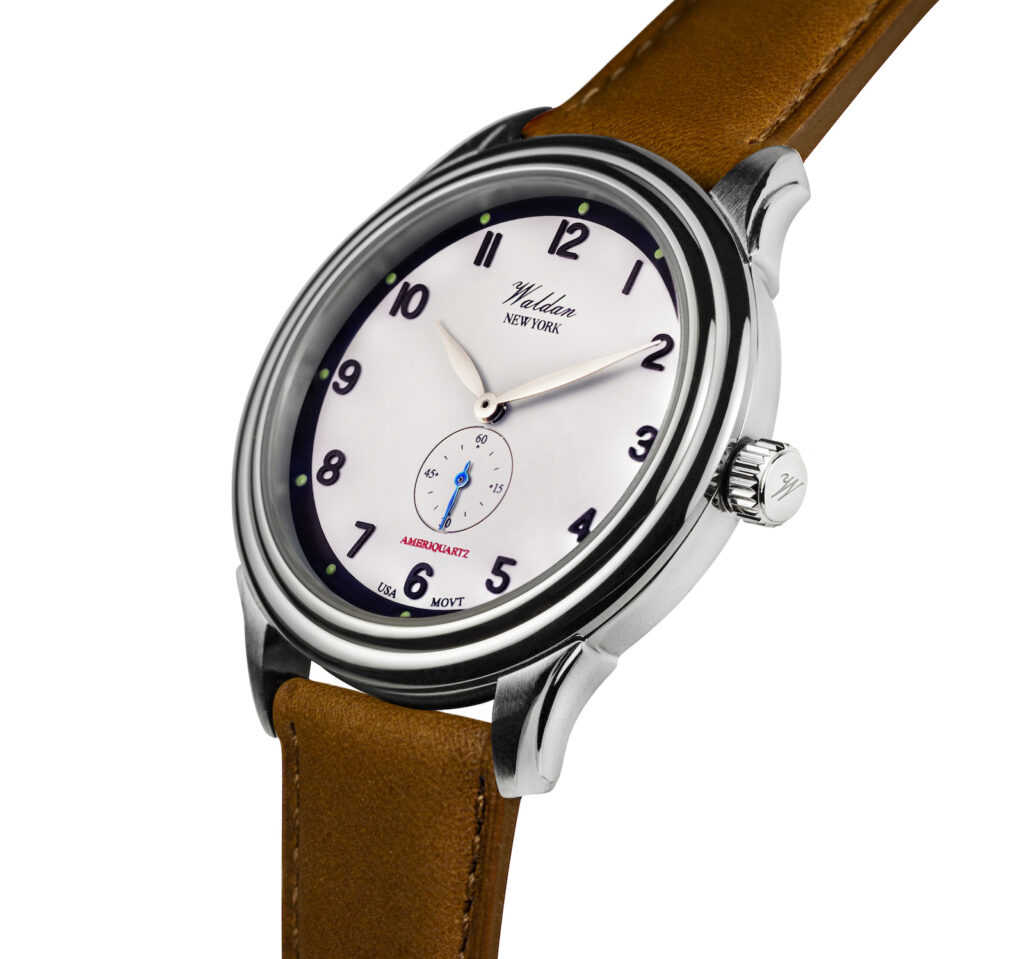 Waldan is introducing its Heritage Professional series with dials in four colors, including black, white, off-white and green. While I look forward to seeing additional dial color options in future debuts, the off-white model nicely fits my wrist, as I’ve noted, while also perfectly enhancing my mood.  With its ability to satisfy both those demands, the Waldan Heritage Professional, priced at $299, is a bargain. 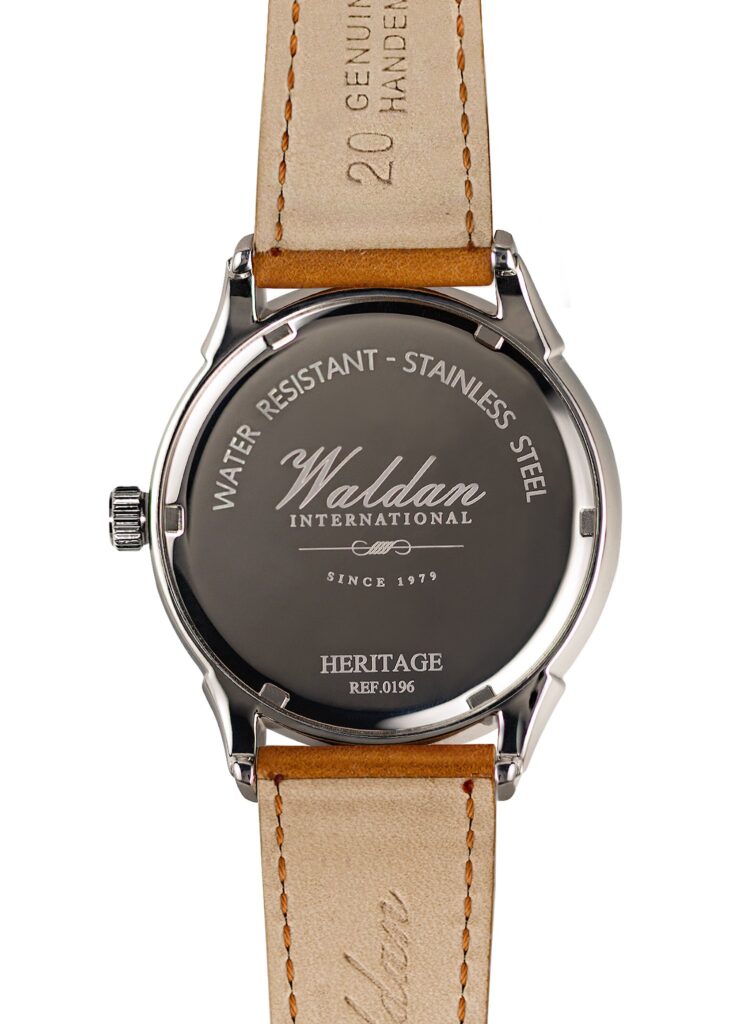 The story of Waldan Watches is an inspiring one.  I’ve followed the progress of the company since the early days of International Watch, and with the re-birth of Waldan Watches underway, led by its new-generation leader Andrew Waldan, it’s time to review the Waldan story and introduce its latest collection.

The groundwork that laid the foundation for the Waldan International watch brand goes back to the late 1970s during a period when founder Oscar Waldan supplied retailers in the United States with in-house-branded timepieces.

A polish immigrant, Waldan arrived in the U.S. in 1946 as a rare survivor of not one, but two separate German concentration camps – thanks in large part to his ability to service and repair wristwatches. The decades between Oscar’s arrival in the U.S. in 1946 and the launch of his own brand in 1979 saw Oscar working in various positions in the U.S. offices of Tissot, Universal Genève, Van Cleef & Arpels, Tiffany & Co., and others.

Three decades after his arrival in the U.S., Oscar took the leap to start his own brand in 1979. He designed his own series of mechanical watches featuring exquisite dials, including chronographs, chronometers, world timers, alarms, and more.

These were all mechanical watches and all would carry the Waldan trademark on the dial.

Bear in-mind that this was in an era long before the cookie-cutter options that make it simpler for anyone to buy an off-the-shelf “made in China” watch. Back then, you really had to know what you were doing to have any chance to bring a watch brand together – especially when you were one of the few members of the industry that still believed the mechanical watch had a future in the newly minted quartz era. These early Waldan watches remain collector’s favorites and embody what a fine luxury wristwatch should be; mechanical complications with top-quality components inside and out, and a design that will never go out of style.

That said, these were, and are, out of the reach of most consumers. They were crafted exclusively in precious gold and platinum with mechanical Swiss Made chronographs and other complicated movements within, and their prices reflected those components.

But while Oscar’s early Waldans were worth more than he charged, they still called for a substantial investment in the thousands of dollars to acquire.

It’s no surprise that the founding father of Waldan Watches would bring his son Andrew into the family business.

At a very young age, Andrew was often found at the New York headquarters of Waldan International. There, with his father and the staff of assistants and watchmakers, Andrew grew into a young man surrounded by all things watches. All the while Andrew was developing an insider’s perspective on an industry about to experience a renaissance that his father had never actually abandoned.

Guided by his father’s indelible principles, Andrew combined an understanding of current market trends with his own experiences when he was called on to take over the company due to his father’s failing health in 2017. Having actively worked with his father at Waldan International since 2013, Andrew was well prepared to take the lead as the CEO of the Waldan brand when his father passed away in January 2018.

Andrew had decided it was time to evolve the brand. During this rebirth process he came to the conclusion that making the classic Waldan design available to a much wider audience might make sense.

So in a daring departure from the established path, he decided to build a watch in the United States, not in Switzerland, using the newly minted Ameriquartz movement inside.

Crafted in steel, the watches are targeting a retail price of under $500 each with a goal of expanding the potential reach for his father’s design(s) by an order of magnitude.

Working with his team, Andrew has now brought to life a watch collection that embraces the design cues of a Waldan watch, including the Waldan font, hands, color palette, fine leather straps, and, most critically, the iconic curves of the stepped case and lugs, all at a retail price will appeal to anyone at a modest $299.99.

In making watches, the devil really is in the details. It’s easy to make a cheap handsome (or pretty) watch that won’t last until the first battery dies. Making one that will last a lifetime and beyond calls for a different approach.

Here’s where Andrew and his team – including his chief technical advisor – came together over the course of more than a year to examine and approve every component and every detail to finally put together a watch that passed muster for both esthetics and durability. 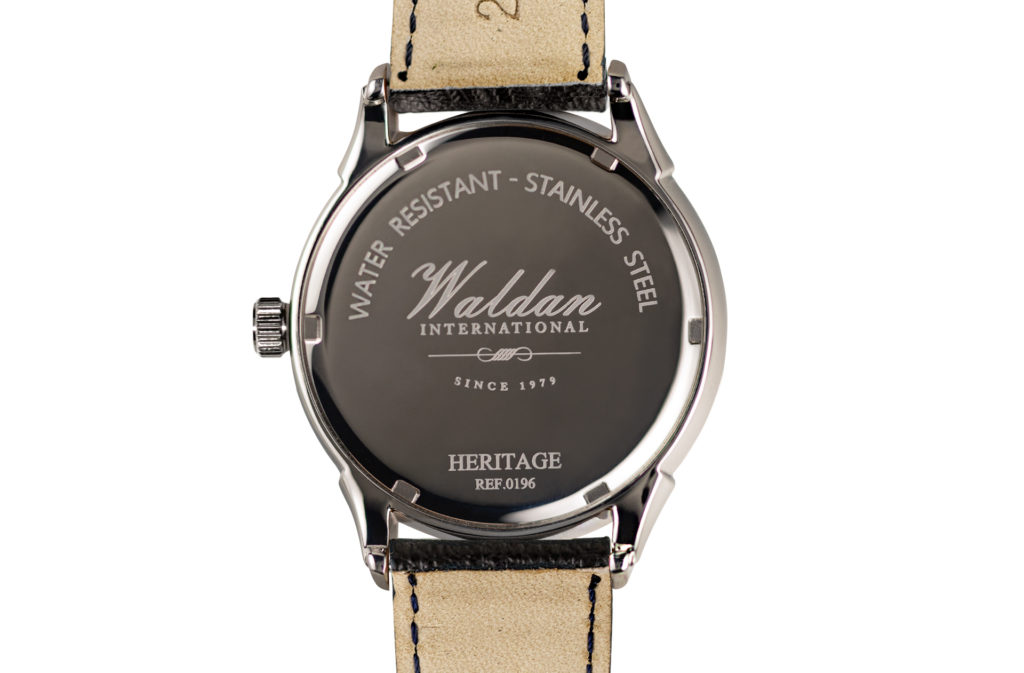 Andrew also chose to source American suppliers where possible to continue his father’s own goal in building a legitimate watch brand in the U.S.  Waldan is currently the only brand authorized to use the Ameriquartz trademark on the dial of their watches.

Those unfamiliar with Ameriquartz movements should note that they are jeweled all-metal movements built in at a state-of-the-art facility in Fountain Hills, Arizona, to the highest standards.

As both a founding advisor to the company and as its sales manager, I can tell you that each movement is built using a combination of modern and traditional engineering to bring the quartz movement to its zenith with regards to accuracy and reliability, and each one is individually tested and certified when manufactured.

Waldan’s new collection is presented in an easy-to-wear 40mm diameter case with a slim 8.6mm profile.  Crafted in 316L stainless steel, they are water resistant to 50 meters with a flat sapphire crystal protecting each of six variations on the theme. These join two Waldan Heritage Sportline versions with oil-pressed linear-patterned dials in black and silver, which rounds out the initial launch of the Waldan Heritage collection.

Although not limited to a specific numbered series, each Waldan Heritage is hand built in the U.S. using a proprietary ATAC (assess, test, assemble, certify) Zero-Defect protocol and will be limited by production capacity and likely to be a hot commodity when it releases in mid July.

To stay up to speed with new releases and details check in at the Waldan web-site (www.waldanwatches.com) which is currently being updated and modernized to better meet the preferences of today’s consumers.