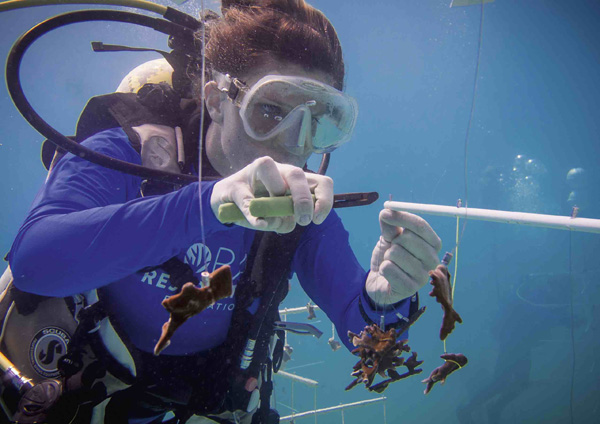 Oris has introduced an impressive series of limited edition dive watches over the years, many of which incorporate a philanthropic cause into their finely engineered designs. The just-introduced Lake Baikal Limited Edition, for example, was created in partnership with the Lake Baikal Foundation to help raise funds to conserve the world’s deepest freshwater lake.

Oris last week carried on its environmental fund-raising by introducing the Carysfort Reef Limited Edition, a significant new watch on two fronts: in its composition—it is the company’s first Aquis model in solid gold—and in its mission to help support the Coral Restoration Foundation, with which Oris has been working since 2014.

Based on the Oris Aquis GMT, the Carysfort Reef Limited Edition comprises just fifty pieces, each with a blue dial and SuperLuminova-filled hour markers and hands. The self-winding Oris 798 (base SW 330-1) movement that powers the watch offers hours, minutes, seconds, 24 hours and date, with a power reserve of forty-two hours.

The watch’s 43.5mm yellow gold case provides water resistance to 300 meters and features an 18-karat security crown and a bi-color rotating bezel. The caseback has a sapphire crystal inlay decorated with a Carysfort Reef motif and the number of the watch within the edition.

The watch’s namesake, Carysfort Reef, is in the Florida Keys National Marine Sanctuary near Key Largo, and it is part of the Florida Reef Tract—the third largest barrier reef in the world and the only barrier reef in the U.S. Since 2014 the Coral Restoration Foundation has been working to restore the reef, which has severely degraded over recent decades. The foundation has made great strides, this year aiming to return 30,000 corals to the reef—up from 25,000 last year.

And this is where the Oris Carysfort Reef Limited edition steps in. Oris is donating three watches to the cause, slated for auction over the next few months, and the funds raised will go directly to supporting the foundation’s work.

The watch, available in April, is fitted on a blue rubber-coated leather strap with an 18-karat gold pin buckle. Price: $19,000.