International Watch recently spoke with Omega CEO Raynald Aeschlimann, a watch industry veteran who first joined Omega in 1996 and who has led the watchmaking giant as CEO since 2016. He discussed Omega’s focus on innovation and precision, especially regarding the Master Chronometer certification process. In addition, we learn more about Omega’s celebrity sponsorships as well as its development of pre-owned Omega sales.

Read the full interview below.

iW Magazine: Having been at Omega for more than two decades, how do you see your brand’s evolution to date?

Raynald Aeschlimann: When I first joined Omega in 1996, the brand was beginning to really make some important moves. It was around that time that we signed our first ambassador, Cindy Crawford, as well as forming new partnerships such as James Bond and Team New Zealand. It was a really critical era for growing our brand around the world.

Since then, I have been a part of so many fantastic changes and evolutions within the company. Especially in terms of Master Chronometer precision and the development of new materials and digital sales, we are constantly seeking to improve and lead the industry. I am very proud of the company we are today.

Omega invested quite heavily on in-house movement production and creativity. How important is that for the future direction of the product development and the Omega philosophy?

Precision has always been at the heart of Omega. It has always been our ambition to research, innovative and invest in better accuracy. To me, it shows the customer how much we care.  It proves that we give everything possible to improve even the smallest margins of quality. For that reason, exceptional movements are a symbol of Omega’s identity and we will continue to maintain that philosophy into the future.

Tell us about the essence of the Master Chronometer certification at Omega.

To gain a chronometer rating, most watches in the Swiss industry are certified once by COSC (The Official Swiss Chronometer Testing Institute). They have specific criteria that a watch must pass. At Omega, we believed that our standards of precision, performance and magnetic resistance were even better than the COSC criteria.

To prove it, we developed “Master Chronometer” certification with the help of METAS (The Swiss Federal Institute of Metrology). Today, after passing the COSC tests, our Omega watches also face an additional eight METAS tests, which are much more stringent and with even finer criteria.

For the customer, this adds trust and confidence. They can buy an Omega Master Chronometer knowing that it has been double certified and proven at the very highest level of excellence. 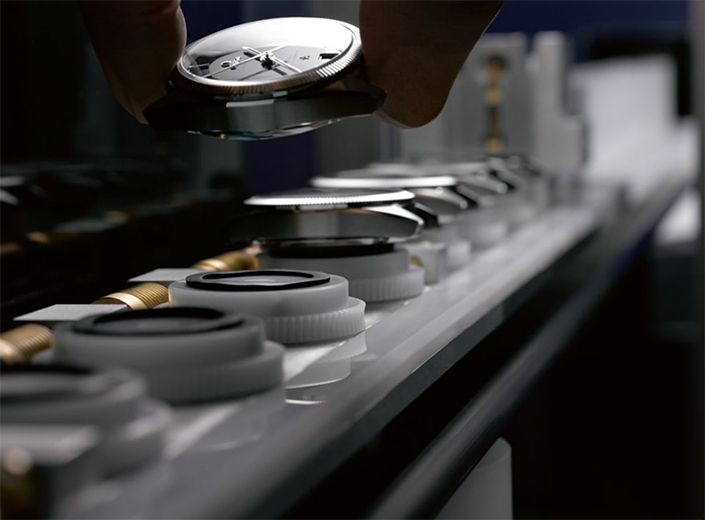 After twenty-two years of the Co-Axial, what have you learned from both a technical and consumer perspective about this movement?

From a technical perspective, Co-Axial has been a massive success. It has showed that Omega is able to revolutionize the watch movement, not only in terms of quality, but also doing it on an industrial scale. That was the challenge that other brands couldn’t overcome. For our customers, it’s yet another improvement on quality.

The Co-Axial system produces less friction, and therefore less wear, so you don’t need to have the watch serviced as often. But it has also been the gateway to achieving more movement innovation, such as the silicon balance spring and other non-magnetic materials. All of these improvements are the main reason that our Omega watches are given a full and impressive five-year warranty.

There seems to be a migration of brands to the sustainable and/or carbon neutral approach. How will Omega engage if at all on these causes?

The environment is an important consideration for our brand. In recent years, we’ve partnered with organizations such as the GoodPlanet Foundation and NEKTON to raise awareness about the planet’s needs.

At a watchmaking level, we’ve also been making changes to the way we work. Our newest factory is perhaps the most impressive example. The sustainable development was built with an ingenious indoor climate and renewable energy concept, along with other beneficial systems. I think it’s important to adapt to this modern way of working.

Do you believe in the perception of investing in R&D is the way forward for a Swiss watch manufacturing brand? How challenging would that be with the business aspects of the industry?

I believe innovation is the key to any progressive business. Watchmaking is a traditional industry, but we still need to find ways of pushing ourselves forward and keeping our products relevant to the modern consumer. Investment is a big part of that, and the Swiss industry needs to maintain its position as the leader of global watchmaking. Every brand does it differently, but I know that Omega is always seeking to innovate. Having the support and expertise of the Swatch Group is a big part of helping us to do that.

How bad has it been at Omega with the global pandemic?

I wouldn’t use the word “bad”. Certainly, it’s been a challenging time and we’ve all ensured some unexpected months. But Omega is a company that has been going since 1848. We’ve witnessed massive global and economic upheaval during our lifetime, but we’ve always found a way to adapt and progress.

Right now, we’re adapting our strategy to what is going on, but I’m confident we’ll see more positive times ahead.

Are there plans for Omega to be involved in the pre-owned sphere of their own brand? If so, how?

Absolutely. In fact, we are already underway in this area. The interest in the pre-owned and vintage market is increasing rapidly around the world, and we feel we have a duty to help and support its growth.

Just recently, we launched the Certificate of Authenticity, which enables pre-owned Omegas to be checked and verified by our experts in Switzerland. It helps to create trust and confidence for those buying and selling, and provides a bit more transparency in the market.

Omega celebrity-ambassadors and sponsorships are a huge segment of Omega commitments. Do they add a lot of pressure to constantly perform year in and year out?

It’s not pressure, it’s enjoyment! The heritage and passions of Omega are unlike any other brand and they give us so much to celebrate every year. We have teams and experts dedicated to every area, so we’re always on top of each project. And with so much diversity, comes a lot of creativity. Things like James Bond, the Olympic Games and golf allow us to craft some very special timepieces that people around the world really love. If you plan well and use your time wisely, there shouldn’t be any pressure.

How committed is Omega to Swiss Made?

Omega is proudly Swiss Made, and it’s an important part of our identity. We see it as a mark of quality and a world-renowned symbol of excellence. Omega goes beyond the required Swiss Made standard, with almost every single part of our watches being made and assembled right here in Switzerland.

What challenges await the Swiss watchmaking industry and its future development?

Perhaps the most obvious challenge is keeping watches attractive to a new and younger generation of wearers. They have access to so much information, videos, blogs, reviews and opinions, so you have to be able to cut through. A big part of that is being authentic and having quality products they can believe in. It’s also important to build a digital presence, not only through social media and websites, but also the development of online sales and communication. I’m pleased to say that Omega is already well ahead in this regard.