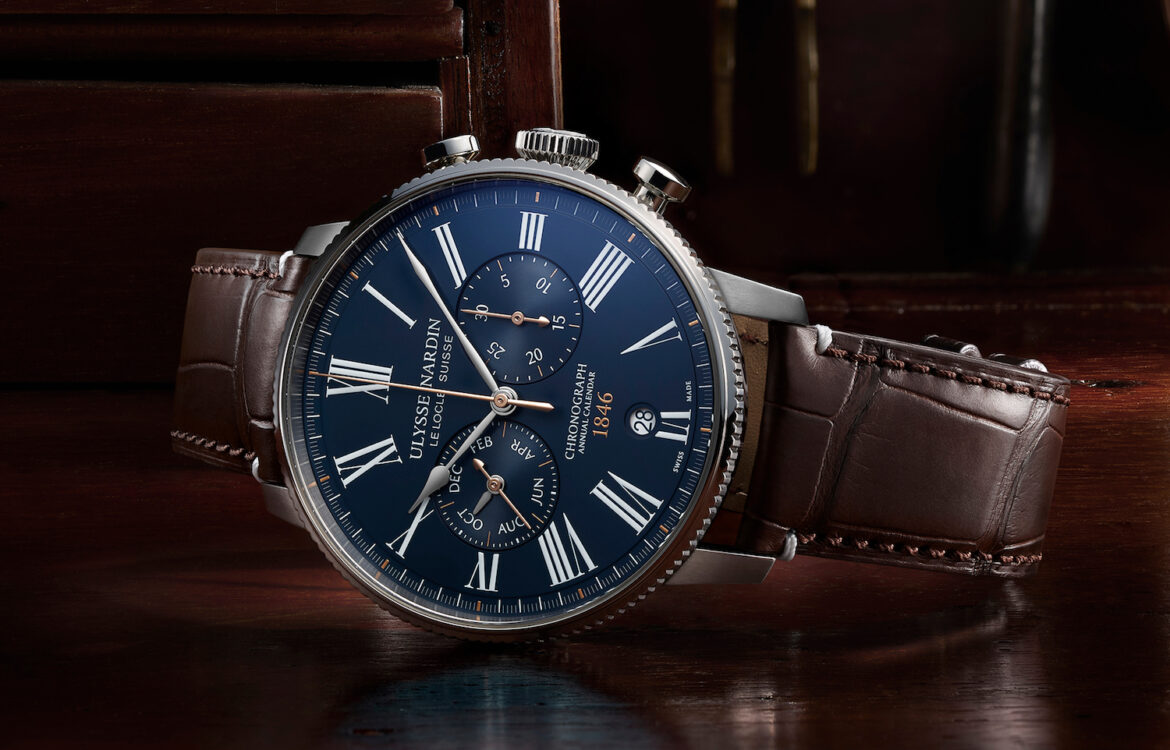 Ulysse Nardin focuses on its rich history as a premier manufacturer of marine chronometers as it debuts seven new models within its Marine Torpilleur chronometer collection.

All of the debuts feature in-house calibers with silicon balance spring, and most also feature the brand’s Diamonsil (a silicon and diamond mix) escapement wheel and anchor. Among the offerings are two new movements, and all seven models are offered as numbered and limited editions.

To signify the LeLocle watchmaker’s 175th anniversary, each model will feature “Chronometry since 1846” printed at 6 o’clock on the small seconds counter.

For Panda dial enthusiasts Ulysse Nardin adds this variation of its Marine Torpilleur sporting two small dark blue dials. One at the top of the dial displays the power reserve indicator and the other shows the second hand and date. ) The watch is Ulysse Nardin’s first panda-style display.

So-called ‘panda’ displays, which feature solid-colored subdials placed amid a light-colored primary dial, were given their moniker decades ago when early dials with the design were said to recall the face of a panda bear.

Inside Ulysse Nardin fits its own UN-118 movement, a solid caliber made even more precise and efficient with silicon and Diamonsil components. Limited to 300 pieces, the 42mm diameter steel-cased Marine Torpilleur Panda comes with a choice of either a brown or blue leather alligator strap, metal bracelet, a rubber strap or a R-Strap. Price: $8,200.

Ulysse Nardin is widely known for its mastery of the annual calendar, a function Ludwig Oechslin brought to the brand’s wristwatches within his perpetual calendar from 1996. With all settings adjustable both forward and backward by using the crown, the Ulysse Nardin annual calendar offered easy time-setting capability. This feature, initially found on very few wristwatches, remains a strong selling point throughout Ulysse Nardin’s collections.

The newest inclusion of that function in this Torpilleur Annual Chronograph finds the date at 6 o’clock with months indicated at 9 o’clock. Powered by the UN-153, an evolution of the earlier UN-150 movement, the debut offers a varnished white or a matte blue dial. Three hundred pieces will be made. Price: $12,100.

As critical to sailors as a precise chronometer, a moonphase indicator can be found on late 19th century Ulysse Nardin timepieces. When used together with a sextant, the lunar indication allowed sailors to devise more detailed navigation. In more recent years, the watchmaker has launched numerous high-profile astronomic-centered watches, notably the Ludwig Oechslin-devised Trilogy of Time series in the 1990s. 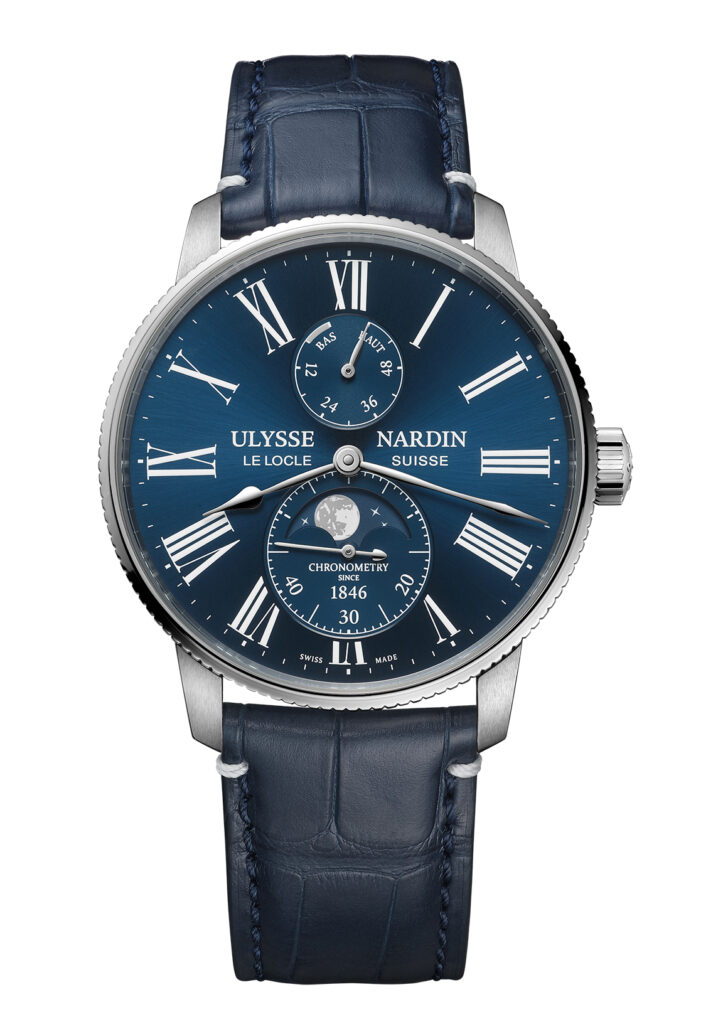 While the new Marine Torpilleur Moonphase is hardly as complex as any of those specialty items, the moonphase display reminds collectors of this brand’s deep history of creating astronomical displays, which likely spurred the inclusion of a moonphase model within this 175th anniversary collection. When adding the moonphase function to this watch, Ulysse Nardin creates UN-119, a variation of its UN-118 movement. 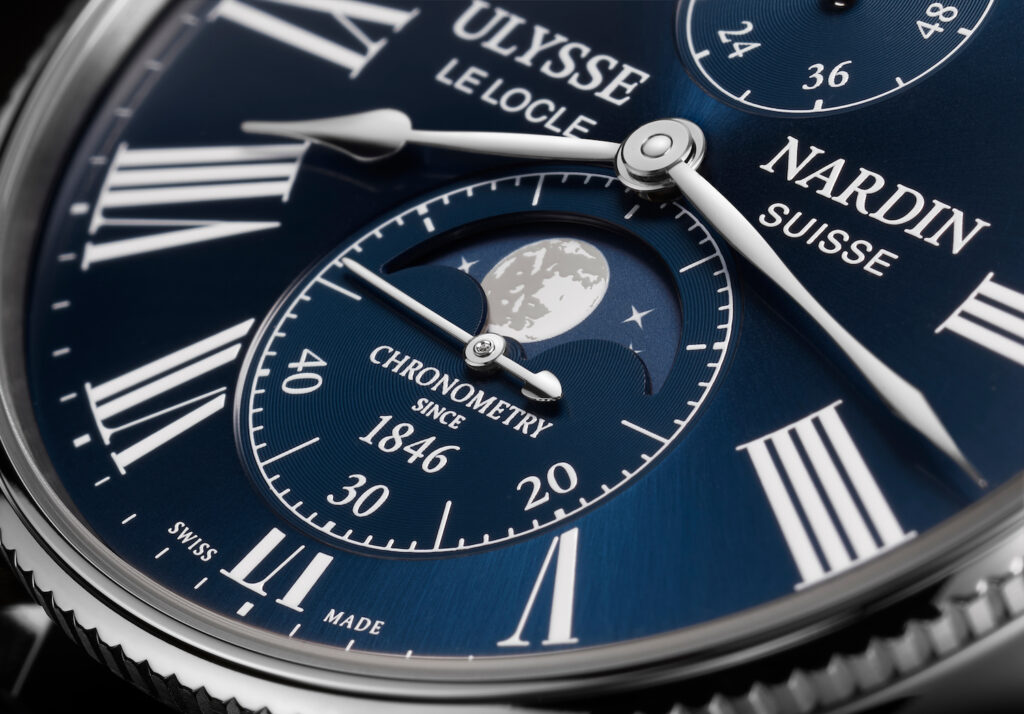 This new 42mm steel-cased watch comes with either a blue or white dial and will be offered as a limited edition of 300. Price: $9,900.

The two models each feature an enamel dial. One is a stunning blue-enamel-dial edition of the power reserve model with the panda dial (noted above) and the Marine Torpilleur Tourbillon Grand Feu. The latter, a rose-gold watch with a black enamel dial, is powered by caliber UN-128 Constant Manufacture with a flying tourbillon that features the technically advanced and patented Ulysse Nardin Escapement.