Not only are the new watches larger in size than the initial set of 42mm Iron Walker chronographs (which debuted in 2020), the new collection also offers customers the option of buying a model with a rubber strap. Wempe carries this enhanced sportiness to the watch’s crown, bezel and pushers, all of which are coated with matching rubber. 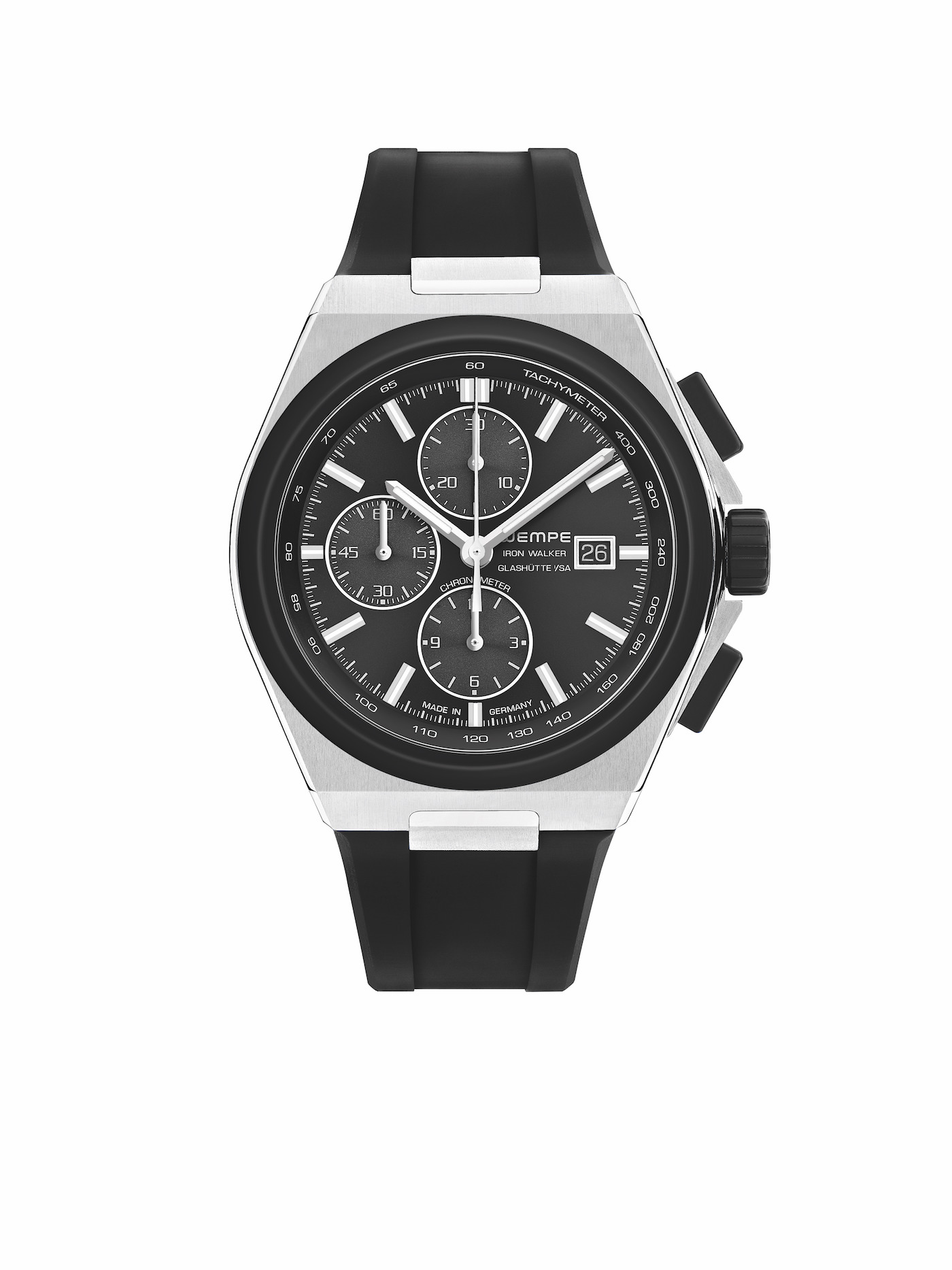 The new collection is also distinct from its forebear inside its newly rubber-accented case. Wempe fits a Sellita SW500 automatic caliber inside each of the four debut Iron Walker Chronograph XL models. This differs from the ETA 7753 Valjoux chronograph inside the Iron Walker Automatic Chronograph collection.

Like the earlier models, all the new watches are chronometer-certified by stringent German chronometric testing according to the ISO 3159 standard. This means each watch is certified to a maximum average rate variation of only two seconds per day when mounted in the case. 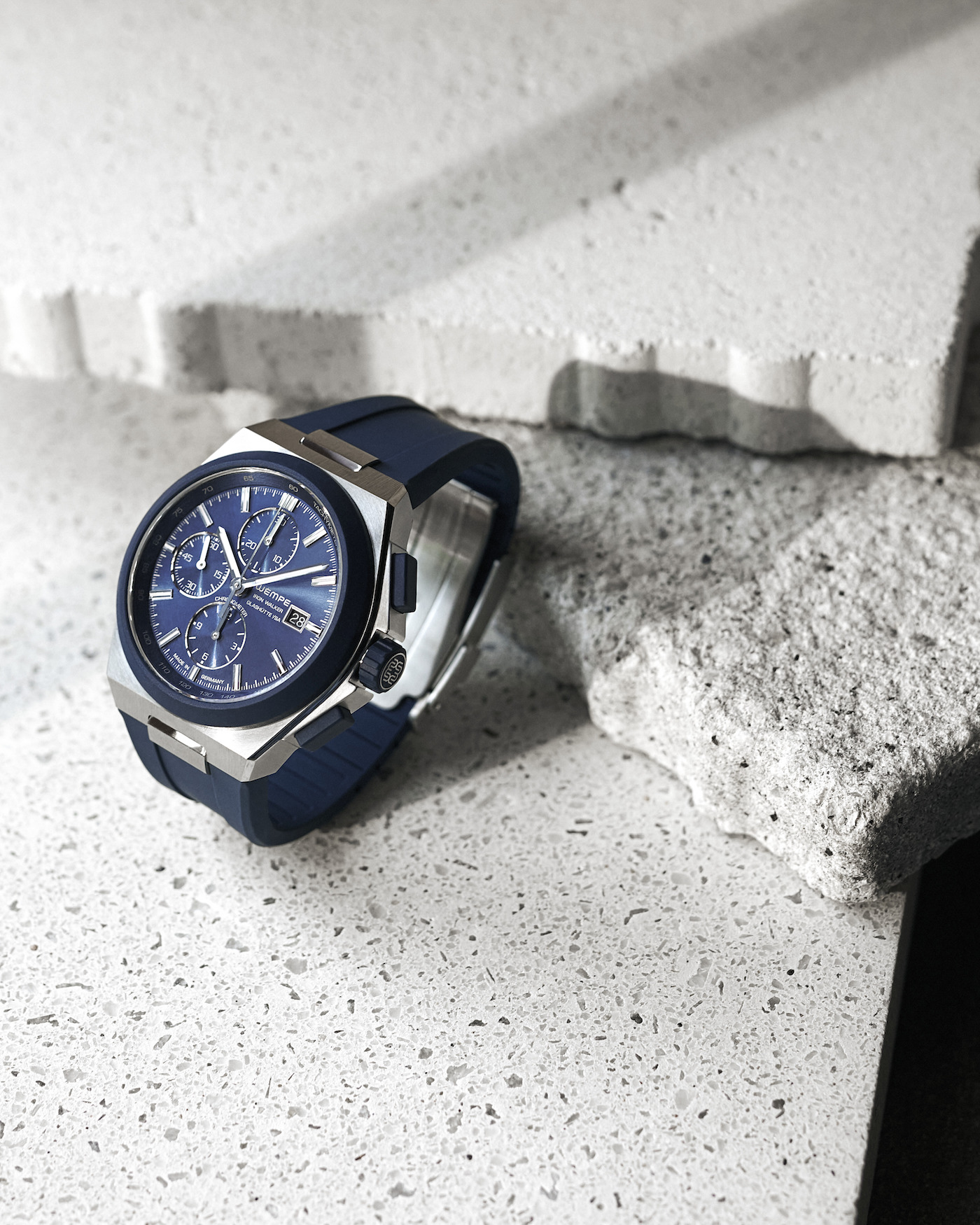 Wempe added Iron Walker in 2020, and at the time the company noted the collection was designed to create moderately priced watches with high-end specifications. (See the full list of Iron Walker Chronograph XL specifications below.) 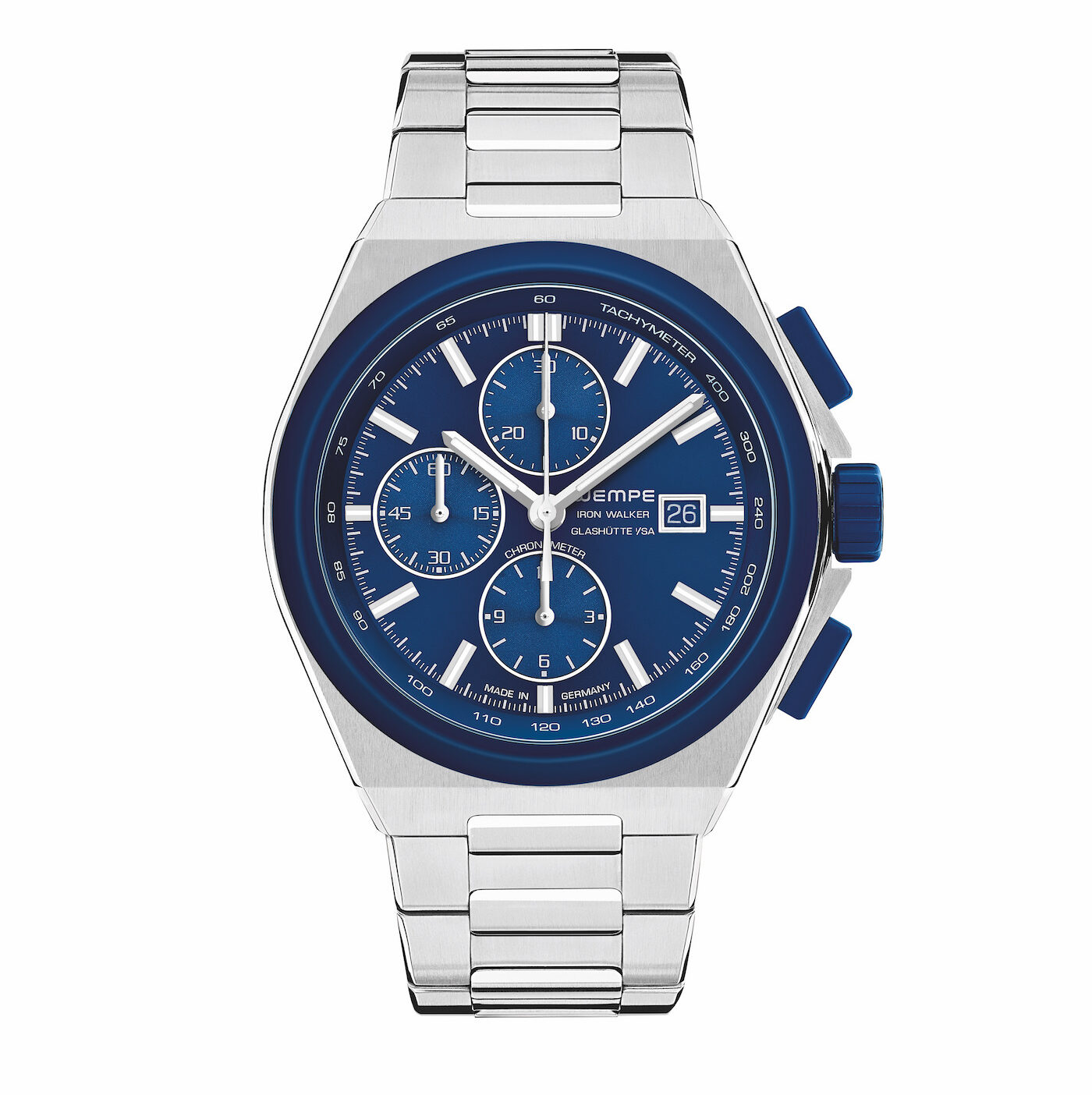 “We are making our own watches for daily use because many brands have withdrawn from the medium price range and only make luxury watches,” explains company director Kim-Eva Wempe. “Our strategy of making high-quality watches for smaller budgets as well has paid off.” 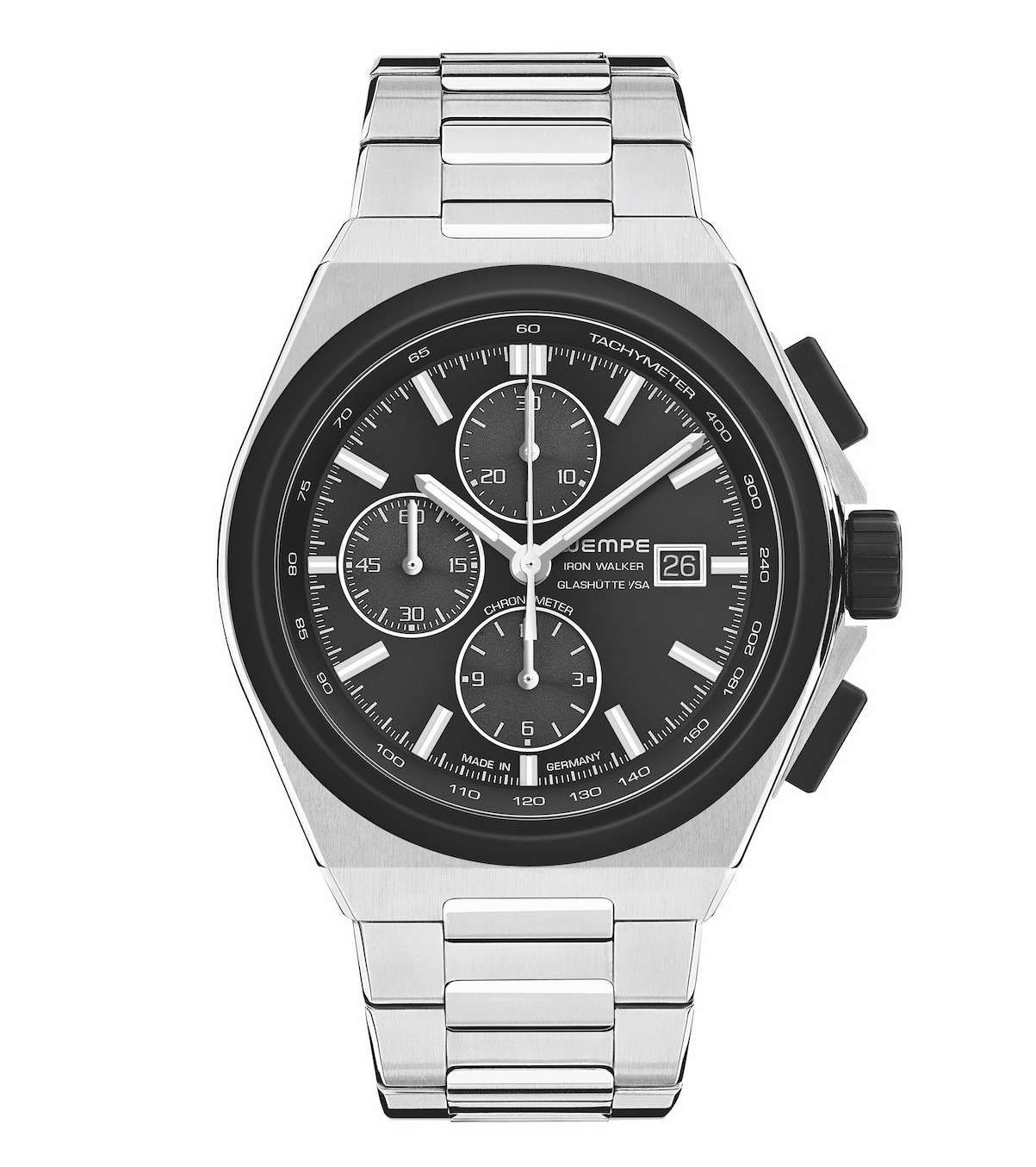 Case: 44mm stainless steel, water-resistant to 100 meters, crown, button, and bezel with a rubber coating, sapphire crystal with an anti-reflective coating on both sides, screw-in crown.

Wempe Glashütte I/SA, the watchmaking division of German-based watch and jewelry retailer Wempe, this week adds a third watch collection to its roster with Iron Walker, a set of four steel sport-leisure watches for men and women.

Named in reference to steel girders used to build skyscrapers, the new Wempe Iron Walker is the latest of many high-profile collections industry-wide featuring integrated stainless-steel cases and bracelets. Of the recent integrated steel-cased watch debuts we’ve seen, Wempe’s Iron Walker is among the most comprehensive (and affordable) with a chronograph, a diver’s watch and two dressy unisex models. All together, Wempe is launching sixteen models (including a few with quartz movements).

At the top of the line is an ETA 7753 (Valjoux)- powered automatic chronograph offered with two dial treatments: steel blue or black-silver in a ‘reverse panda’ layout. The 42mm watch features a date, tachymeter and three totalizers in a tri-compax arrangement; all hands and markers are coated with SuperLuminova. Two protected rectangular pushbuttons control the chronograph.

As is the case with all Wempe chronographs, the caliber here is adjusted in the company’s own workshops in Glashütte so that it passes the more stringent German chronometric testing standards. These require the movement’s maximum average rate variation at only two seconds per day when mounted in the case. Price: $4,250.

Water resistant to 300 meters, the dive model in the new collection is also a certified chronometer that adds a folding safety clasp with an extension element to the Iron Walker’s signature integrated three-row stainless-steel bracelet. With the extension element, the watch’s length can be increased by as much as 17mm.

This dive model utilizes an internal bezel dive-time ring, mounted behind the sapphire crystal, to meet all DIN and ISO standards for dive watches. To satisfy all underwater visibility requirements, Wempe has marked the watch’s triangular zero mark and its hands and markers with SuperLuminova. Both crowns are screw-in for added water resistance.

Despite its dive-ready technical design, the Wempe Iron Walker Automatic Diver’s Watch is sleeker than most dive watches. The watch is only 11.7mm thick – a moderate size that means it will fit nicely under any sleeve.

Inside Wempe places an ETA 2892 automatic movement that it watchmakers have adjusted to meet German chronometer and ISO 3159 dive watch standards. Price: $3,450.

As a moderately sized (40mm) or smaller sized (36mm) three-hand dress watch, Wempe’s remaining Iron Walker option is a simpler model offered with a choice of automatic or quartz movement.

All four models are certified chronometers with central hour, minute, and seconds hands and a date, and each features raised, luminous markers.

Available with a black, blue or white dial, the automatic models are powered by an ETA 2892-A2 (power reserve of 50 hours) while and ETA E64.111 powers the quartz models (constant running time 41 months).

To impress as a dress watch, Wempe has made the both the larger ‘Men’s’ size and the smaller ‘Women’s’ size with a sleek 9.75mm-thick case. Nonetheless, any of these four dress models offers the same solid three-link tapered steel bracelet that marks the entire Iron Walker collection.

I’ve long been impressed with high value Wempe has built into its Chronometerwerke and Zeitmeister collections. With Iron Walker, Wempe appears to again combine well-considered styling with top-level specs.

Since 1878, Wempe has strived to deliver the ultimate customer experience, and during the last 139 years it has developed into one of the world’s leading internationally operating purveyors of exquisite timepieces and fine jewelry. The German-based company today owns and operates 25 stores located at the best addresses in Germany, London, Paris, Vienna and Madrid, and it also maintains offices in Beijing. Wempe can also be found on the five-star luxury cruise liners, the MS Europa and MS Europa II.

The company’s five mono-brand boutiques include a Rolex boutique in Berlin and on New York’s Fifth Avenue in the Rolex Building, an A. Lange & Söhne boutique in Munich, a Jaeger-LeCoultre boutique in Frankfurt, and a Patek Philippe boutique in Hamburg, with more planned for the future. Wempe is also a proud producer of its very own watch lines, the Wempe Zeitmeister and Wempe Chronometerwerke, whose production site is located in the fully restored, historic Observatory, high above the city of Glashütte. There, Wempe operates Germany’s only official chronometer testing facility.

Wempe continues to be family owned. Hellmut Wempe and daughter Kim-Eva Wempe are both determined and committed to keep it that way. Their entrepreneurial spirit and democratic leader- ship style have empowered their store managers to give each Wempe branch its very own personal space within the Wempe philosophy.

“We have close ties with the company headquarters in Hamburg,” says Rüdiger (Rudy) Albers, President of American Wempe Corps. “We’ve taken the values we were taught there and brought them with us across the sea.” Albers, 53, has been at the helm of the New York Wempe store since 1990, and his staff of 34 professionals follow his lead, projecting a welcoming atmosphere that offers a pleasant break from the hectic pace of Manhattan.

This New York flagship location has been on the ground floor of the Peninsula Hotel since 1990, a landmark building on the corner of Fifth Avenue at 55th Street. In 2016, Wempe seized the opportunity to double its footprint to 5,500-square-feet after the expiration of the leases of its two neighbors, Swarovski and Lindt Chocolatier.

The architecture of the new store pays tribute to the rich history of the building, which was the first steel-construction skyscraper hotel in the city, built in 1905. The interior concept was motivated by the desire to provide more open space for Wempe customers, while maintaining its elegant atmosphere. Thus, rich materials, including hand-selected granite from the quarries around Verona and fine smoked oak, give the store a completely new, contemporary appearance. The ceilings were raised, and the numerous display cases and presentation areas are now directly accessible to clients. The Patek Philippe and Rolex shop-in-shops are harmoniously integrated into the open floor plan, flanking the store on the left and on the right.

The central entrance area is devoted to the luxurious jewelry collection from Wempe’s very own goldsmith atelier, and timepiece enthusiasts are greeted by a John Harrison-inspired H1 Sea Clock manufactured by Sinclair & Harding in Yorkshire England. This fully functioning clock is modeled after the historic marine chronometer that made it possible to calculate longitude while at sea. Eight exterior display windows, up from five, stretch along the half-block façade, inviting passersby to explore the treasures within.

The state-of-the-art service department was relocated and expanded, and customers have the opportunity to admire the skills of the highly trained watchmakers who are visible behind a large glass pane. With service as one of its highest priorities, Wempe has spared no expense in its equipment and the training of its staff to receive authorization from brands to work on many of their most sophisticated timepieces.

“Our ultimate goal is to achieve customer enthusiasm, not just satisfaction,” shares Albers, borrowing a term from one of his idols, “Danny” Meyer, CEO of the Union Square Hospitality Group.

Wempe made its leap across the Atlantic in 1980, and ever since then it has been writing a German-American success story in the center of Manhattan. This recent $8 million investment in the renovation and expansion of the New York store demonstrates, once again, Wempe’s commitment to its role as purveyor of an unparalleled selection of fine timepieces and jewelry.