Even though I’ve never met Torsten Nagengast in person we have been friends for several years. It started back in 2013 when I featured his ‘Unique Repeater Watch 18k Diamonds’ on my website. That particular model is a unique 1/1 piece that is powered by a LeCoultre caliber from 1908.

I was massively impressed to discover Torsten is a black belt master, fourteen times regional and four times German Champion in Kickboxing. He has also won the bronze medal at the World Championships.

This competitive spirit was the catalyst for a really exciting project called Extreme, which he conceived around 2016. After years of fastidious research and development, the timepieces are now ready to hit the market.

At this stage, I should give context and explain Torsten has also worked in the automotive industry for years. Within this period he has collaborated with prestigious clients such as BMW, Mercedes and Porsche. Ultimately this experience was the catalyst for the Extreme project. Torsten’s vision for this watch was to create something special constructed from cutting edge lightweight materials.

For example, he uses a case constructed from forged carbon and a multi-layered dial from carbon fiber. However, the most ambitious part of the project was to create an in house mechanical hand-winding movement from anodized aluminum. 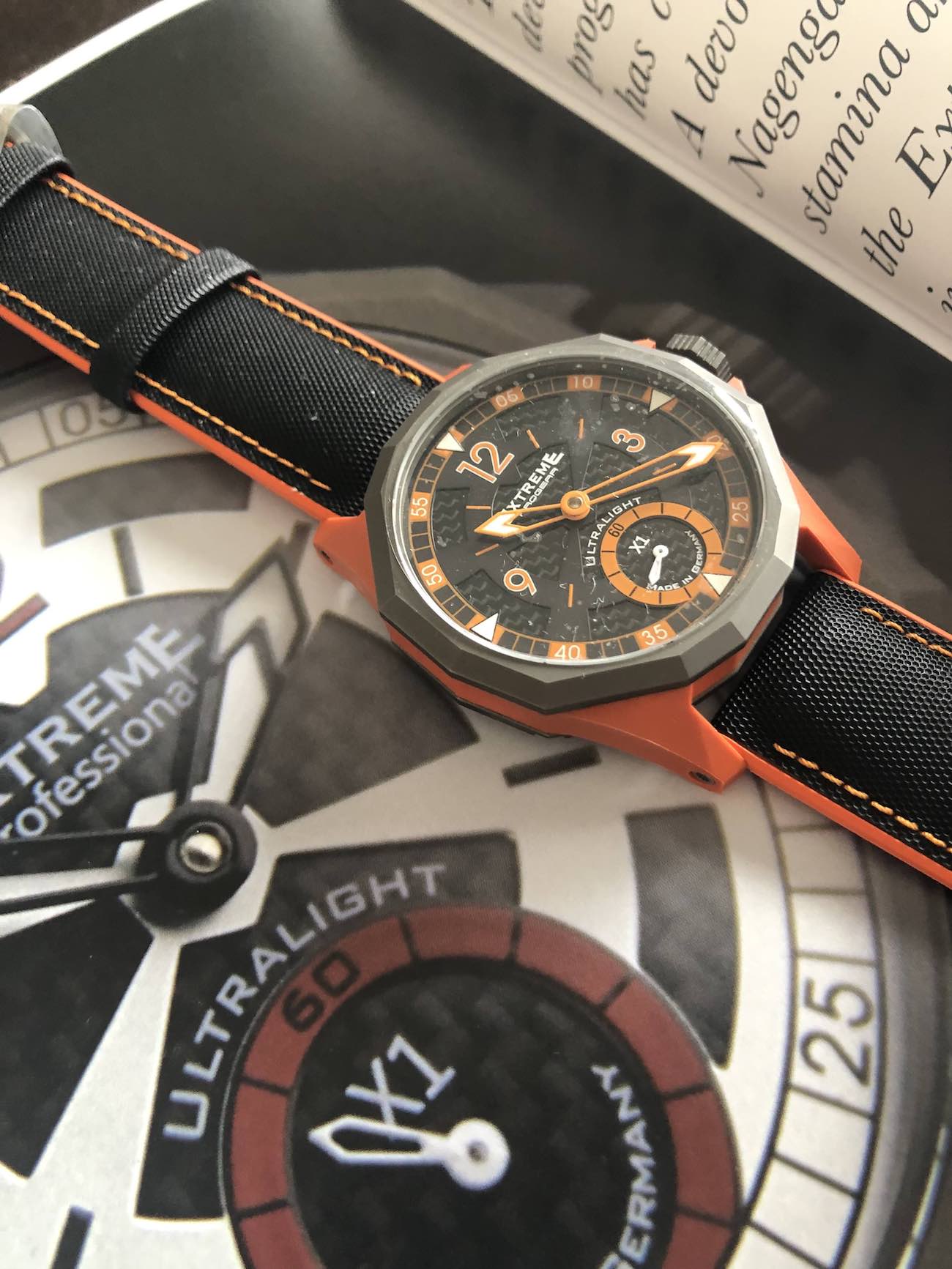 Richard Mille has been creating these types of timepieces for several years. Most notably their collaborative series with tennis legend Rafael Nadal. Unfortunately (due to price point) most people would have to sell their homes and live in the car to afford them. Torsten was very keen to make a similar style watch that is also highly accessible. While this Firefly example is a one-off watch, Extreme watches like it are priced at around $2,300.

Early on in the process Torsten and I realized there was a certain symmetry and our respective paths were aligned. As well as being a multi-published award-winning author, I’m also an industrial designer. I’ve created numerous watches from different carbon composites that have previously not been used in the industry. 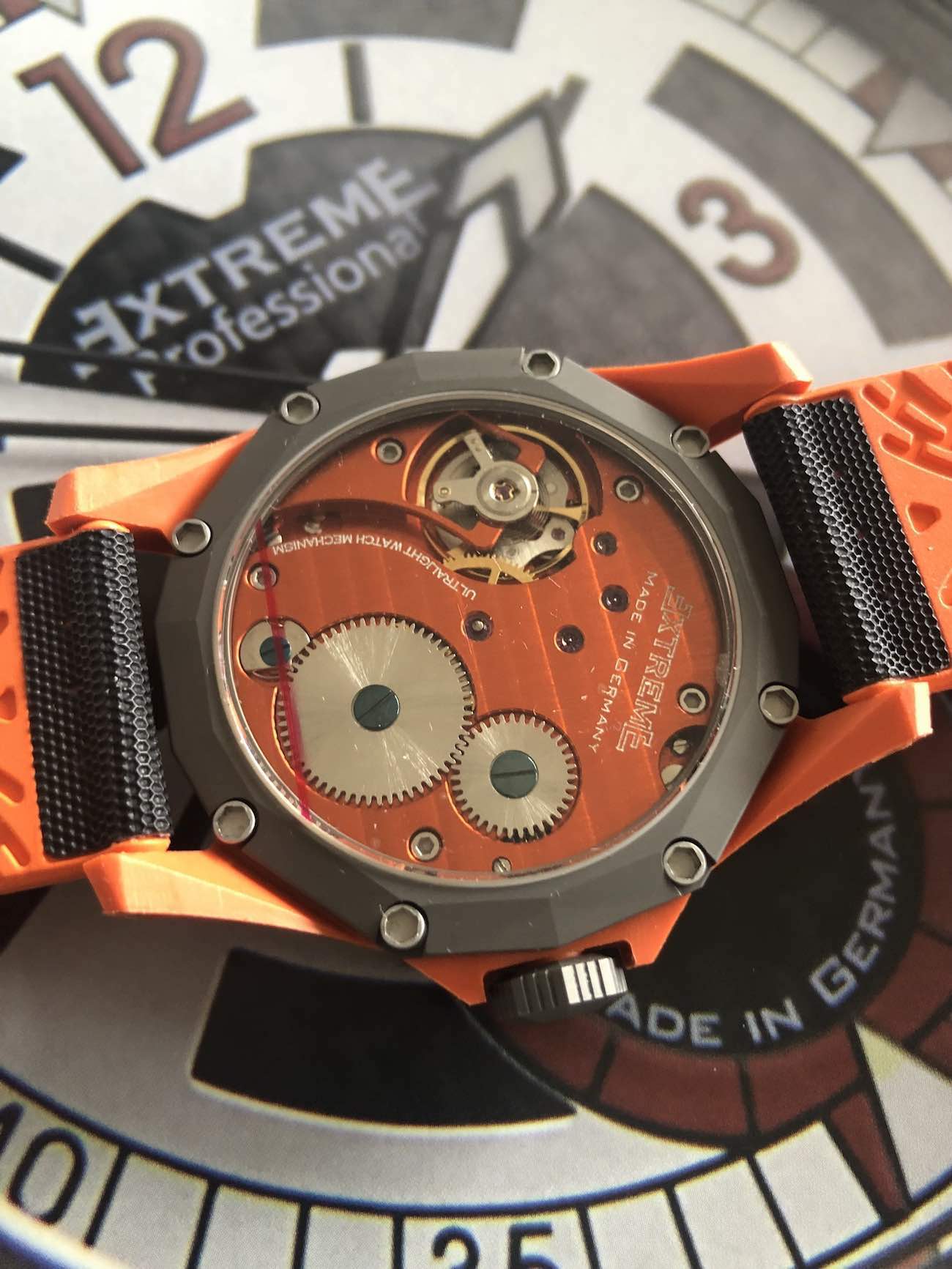 I spoke in detail to Torsten about these creations and we agreed it would be mutually beneficial to co-create a watch. The result is a unique version of the Extreme called the Firefly.

What makes this timepiece so special is the vibrant orange carbon composite case. This complements the orange chapter ring and small second counter showcased on the multi-layered carbon fiber dial. 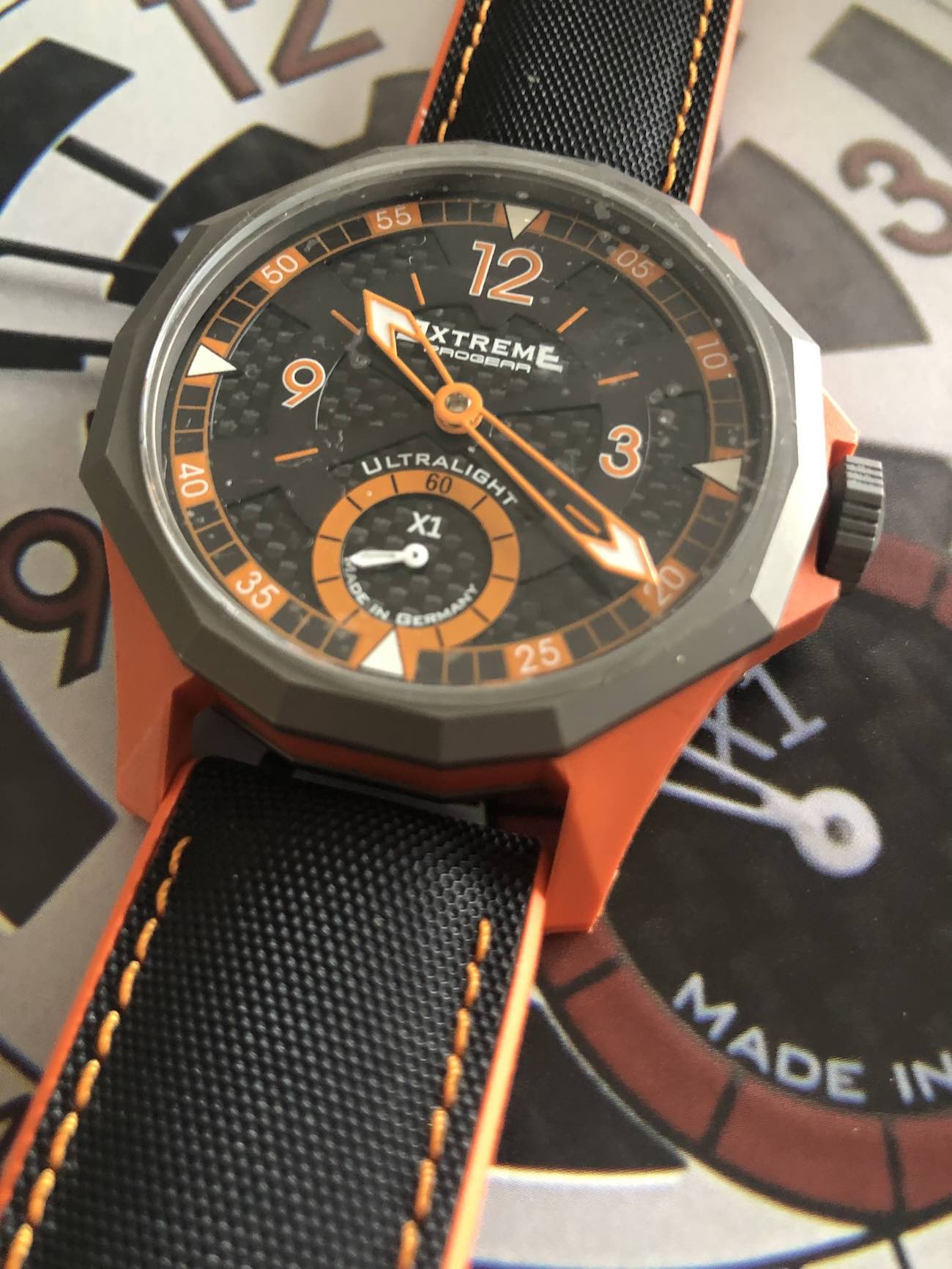 For Torsten Nagengast, Extreme is far more than just a watch brand. It combines three of his passions, which are automotive technology, exercise and horology. A few years ago Torsten (by his own admission) was approaching middle age as an unfit, workaholic. Extreme symbolizes a renewed lust for life. 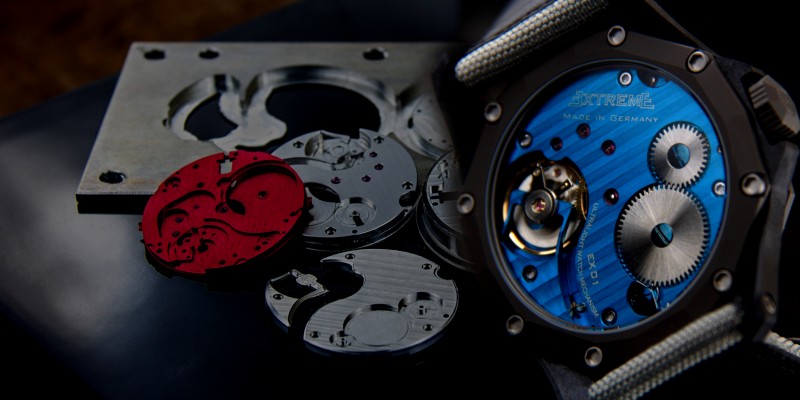 From a consumer perspective, it’s also a win-win scenario because they can get a really cool watch, which utilizes state of the art lightweight materials. From an aesthetic point of view, it also is very successful and will appeal to a broad demographic.

Over the last few years, I have developed a great working relationship with watchmaker Ben Birkett’s workshop, which is located in the Adelaide CBD (Central Business District) in South Australia.

Ben and I have collaborated on several projects. When I told him of a new concept called the ‘Inferno’ he was very excited to make it a reality.

One of the most exciting developments in modern watchmaking is the introduction of experimental materials. In my opinion forged carbon composites are at the forefront and have dominated the masculine market. Certainly, Hublot, Richard Mille and Roger Dubuis are the highest-profile brands using this material. However, there are also numerous small independents that have achieved very successful results.

In the last year, I created two watches, called the Kaleidoscopic and Volcanic, from multi-colored carbon. For the Inferno I wanted to fabricate the case from something even more unusual. The solution was a forged carbon composite interweaved with gold foil.

Due to the complicated manufacturing procedure, including molding and CNC (computer numerical control) machinery, it took several attempts to create the desired aesthetic. The final result was a subtle marbling type patterning that sparkles in the light. 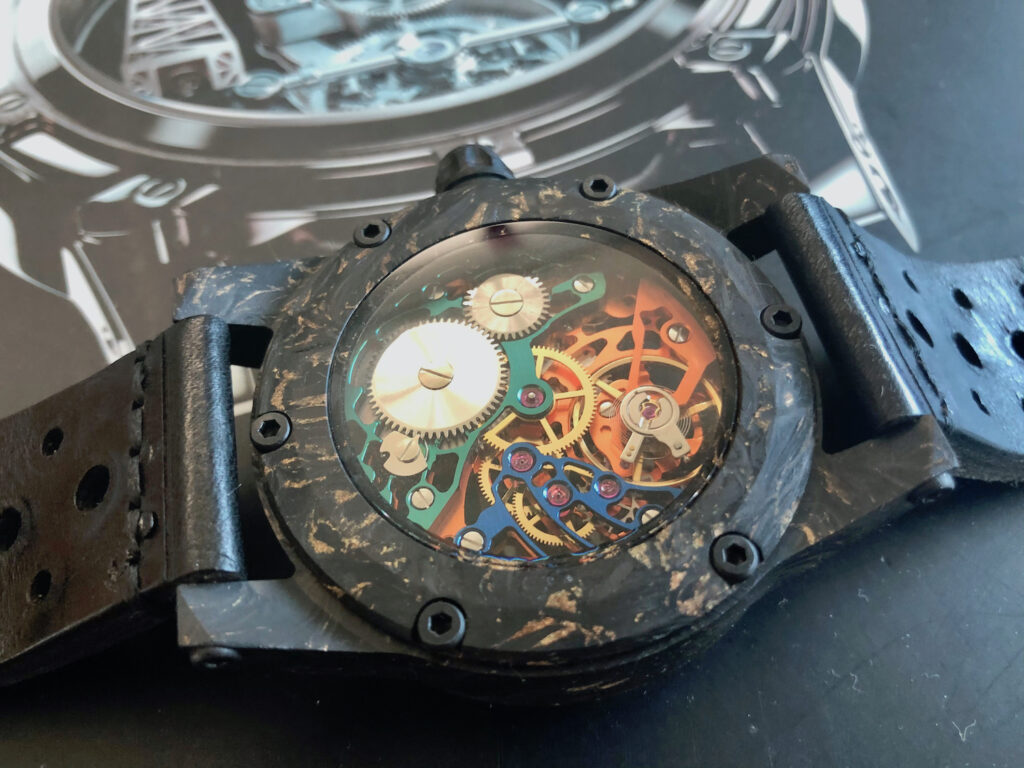 This is the first time this unique and exciting material has ever been used in watchmaking. The crown cover, open-worked hands, dial and case back are also fabricated from this composite. Ultimately, this makes the timepiece exceptionally lightweight, especially considering the size. This watch has an extra-large diameter measuring 52mm (excluding the crown). 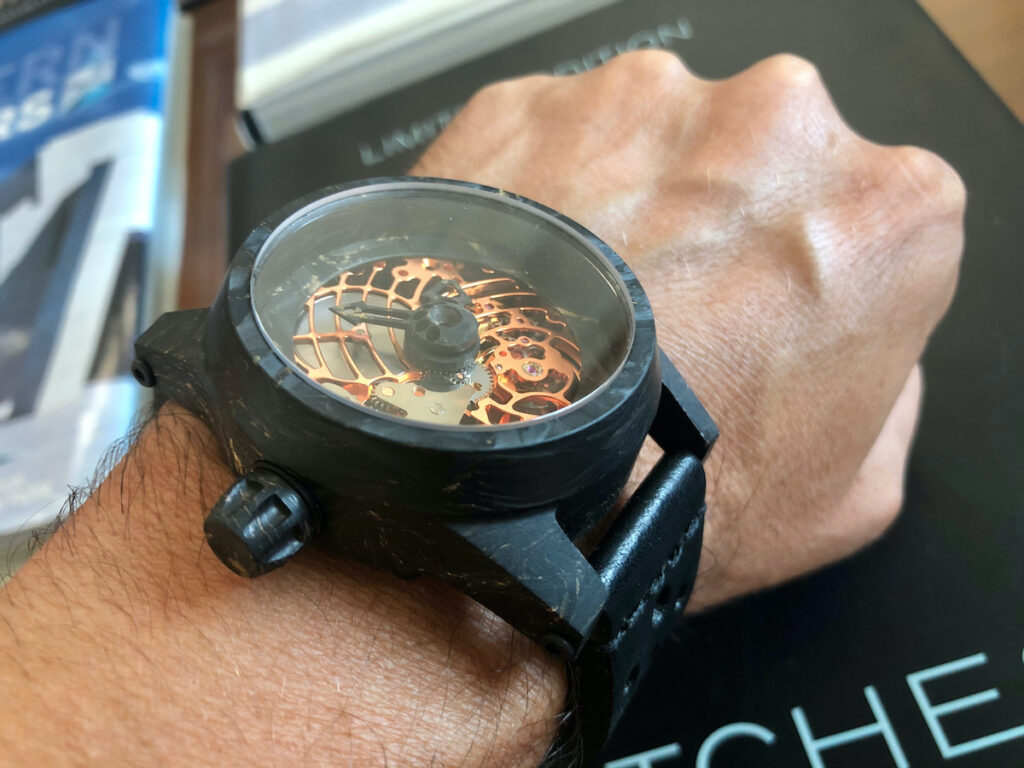 Originally, when I visualized the design of the Inferno it featured an unusual skeleton movement. Ultimately, I wanted a bright orange mechanism to create the aesthetic of fire. Fortunately, Frédéric Leuba offered to assist me in my plight. Frédéric is an industry veteran and has worked with many famous brands for a decade. Most people might be familiar with his micro brand called Muse Swiss Art Watches.