In this final installment of our series outlining automotive-wristwatch partnerships, we highlight Girard-Perregaux and Richard Mille.

Girard-Perregaux has signed a multi-year agreement as the official watch partner of British automotive manufacturer Aston Martin Lagonda and the Aston Martin Cognizant Formula 1 team. Both brands are commemorating milestones this year: founded in 1791, the Swiss watchmaker is one of the oldest fine watchmaking manufactures still in operation and celebrates its 230th anniversary, while Aston Martin marks its return to Formula 1 after a hiatus of over sixty years. 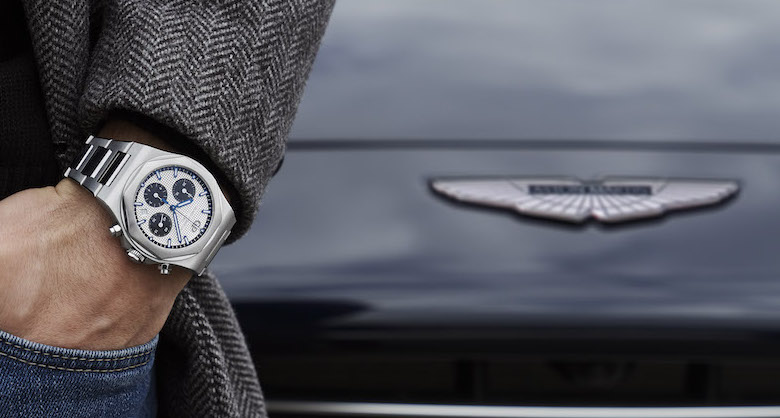 Several limited-edition timepieces will be unveiled, the first of which was released last June.

The lightweight, 79-component tourbillon cage weighs in at only 0.25 grams, thereby reducing energy consumption, while the micro-rotor’s vertical flank is etched with the Aston Martin name filled with white luminescence. 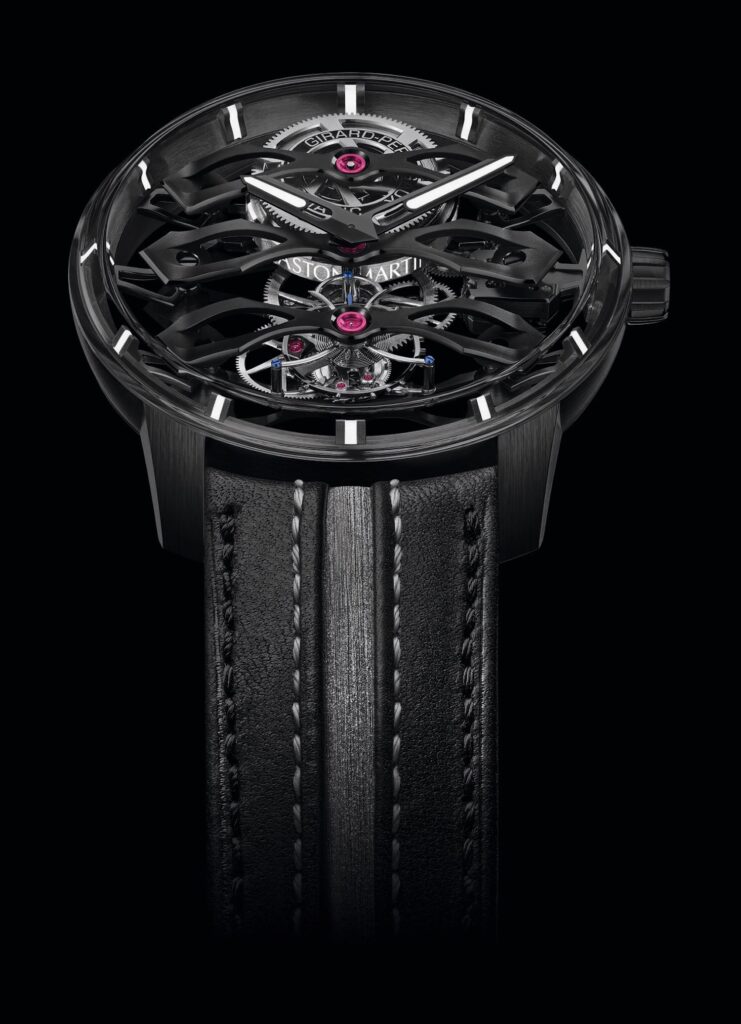 In a world first, Girard-Perregaux introduces an innovative material never used before in watchmaking on its calf leather strap: a central insert in rubber injected with white gold.

“Rarely do we work with others to reinterpret the Three Bridges, explains CEO Patrick Pruniaux. “However, on this occasion, we have made an exception, mindful of Aston Martin’s prowess for design.” 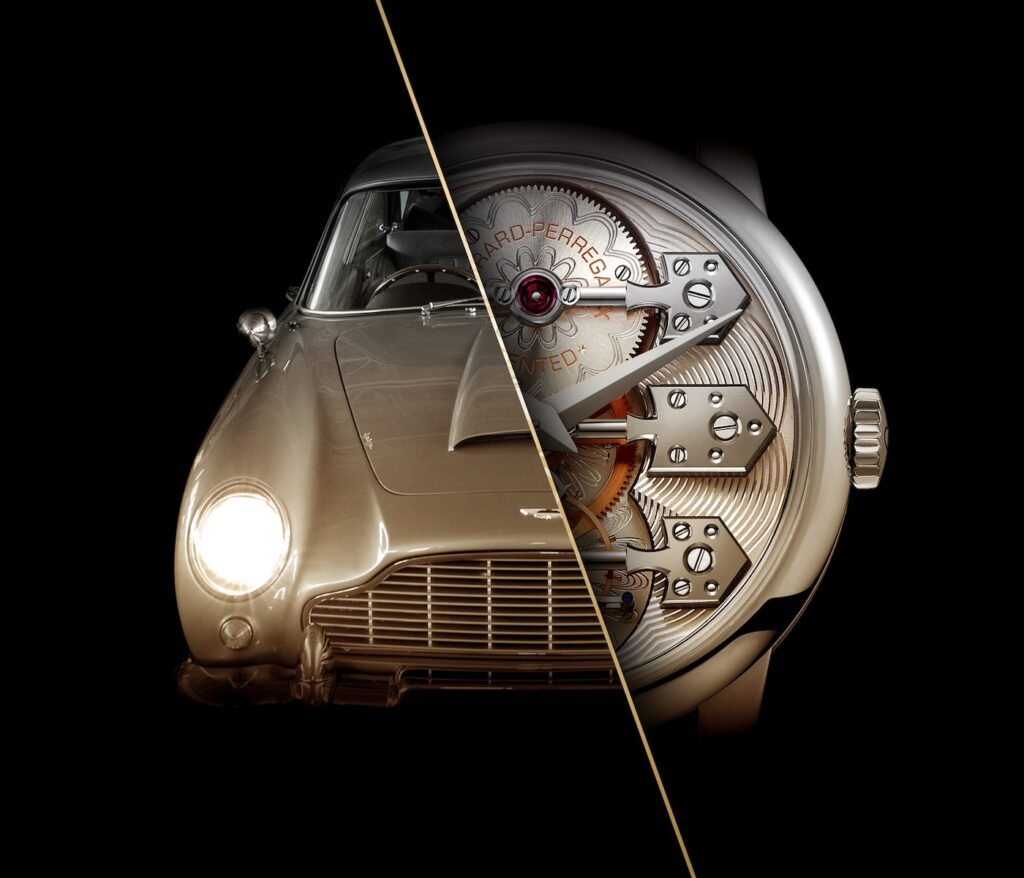 Later in 2021, a second timepiece will be launched, from another of the manufacture’s iconic collections. We can also expect to see Girard-Perregaux clocks in Aston Martin road cars.

Girard-Perregaux has a long history of collaborations with the automotive universe. During the mid-1990s, then owner and car enthusiast Luigi Macaluso began a ten-year partnership with Ferrari, and together they produced the highly-successful Ferrari watches.

“Girard-Perregaux has had strong ties to the automotive world in the past, which we were keen to reactivate in a stronger way,” notes Clémence Dubois, Girard-Perregaux’s chief marketing and product officer.

Calling its timepieces ‘racing machines on the wrist,’ Richard Mille is no stranger to the automotive world, with friends and partners like Jean Todt, Alain Prost, Felipe Massa, Sébastien Loeb and the Venturi Formula E team. The brand even owns an all-women LMP2 racing team.

After discussions for Richard Mille’s collaboration with both Ferrari’s racing and road car divisions were initiated last summer, this year it is partnering two F1 teams – Scuderia Ferrari and McLaren Racing – while continuing personal relationships with F1 drivers Fernando Alonso and Mick Schumacher.

The new multi-year tie-up extends from Formula 1, WEC endurance programs and Competizioni GT to the renowned Ferrari Challenge single-model championship for gentlemen drivers worldwide as well as for the Ferrari Driver Academy. Starting in 2022 Richard Mille will launch a series of watches bearing the famous Ferrari Prancing Horse logo, developed by Richard Mille’s team in Switzerland and Ferrari’s designers and engineers.

“Richard Mille has since its inception been viewed as the Formula 1 of watchmaking,” says Tim Malachard, Richard Mille’s marketing director. “The inspiration of materials and technology found in F1 being applied to produce extremely technical, ergonomic and light timepieces. It is also not a secret that those who like cars and motor racing are also fans of watches. Ferrari and Richard Mille share many common values, and many of our customers are owners of either brand, so another good reason to collaborate over the next few years.”

To mark its fifth year of partnership with McLaren Automotive, Richard Mille launched the RM 40-01 Automatic Tourbillon McLaren Speedtail last May in tribute to the fastest road-going car the British carmaker has ever built, with a top speed of 250 mph. The watch is available in a limited edition of 106 timepieces to match the exclusivity of the 106 Speedtail hypercars.

“There are many similarities between the way that Richard Mille and McLaren approach common design and engineering challenges, such as saving weight, reducing vibrational impact and minimizing resistance,” says Rob Melville, McLaren automotive’s design director.

The watch’s lines mimic the car’s teardrop shape – significantly wider at 12 o’clock than at 6 o’clock – and its bezel indentations evoke bonnet openings while its pushers recall air outlets behind the front wheels. 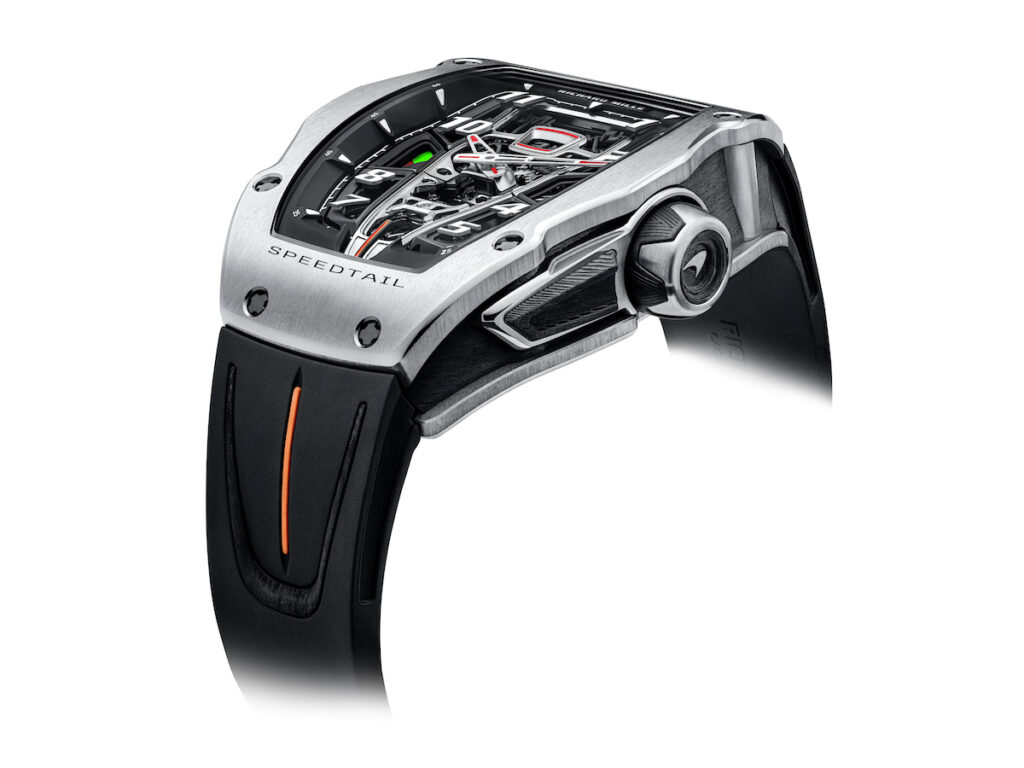 The watch also debuts numerous firsts in a Richard Mille-manufactured automatic tourbillon: in-house power reserve display, oversize date and function selector complications. Richard Mille’s casing department required an unprecedented 2,800 hours over eighteen months to perfect the contours of the titanium and Carbon TPT case, with the conception of five prototypes before the optimum shape was reached. 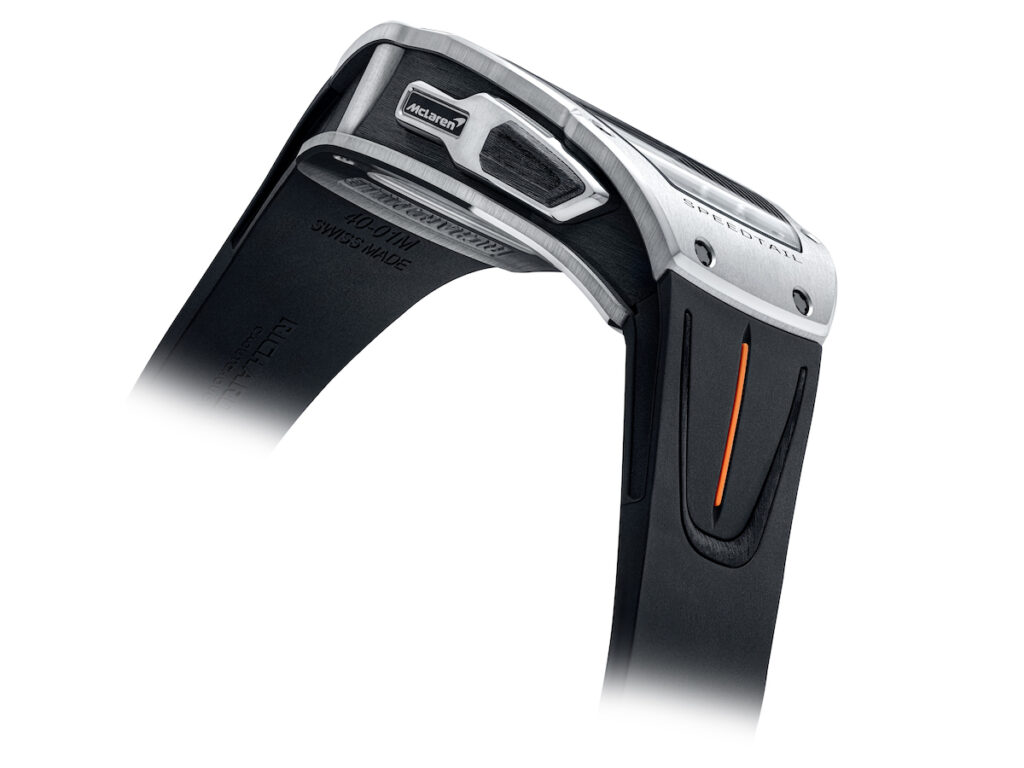 As the case tapers between the bezel and caseback, Richard Mille developed an innovative upper crystal glass featuring a “triple contour” to protect the movement.