Arnold & Son has dressed one of its most impressive watches, the Globetrotter, in red gold, to create the Globetrotter Gold, effectively underscoring the luxury of this model’s world-time functionality.

Previously available cased in steel, the 45mm Globetrotter takes on a new golden glow, especially with its massive openworked bridge now so richly polished in the same gold used to case the watch. 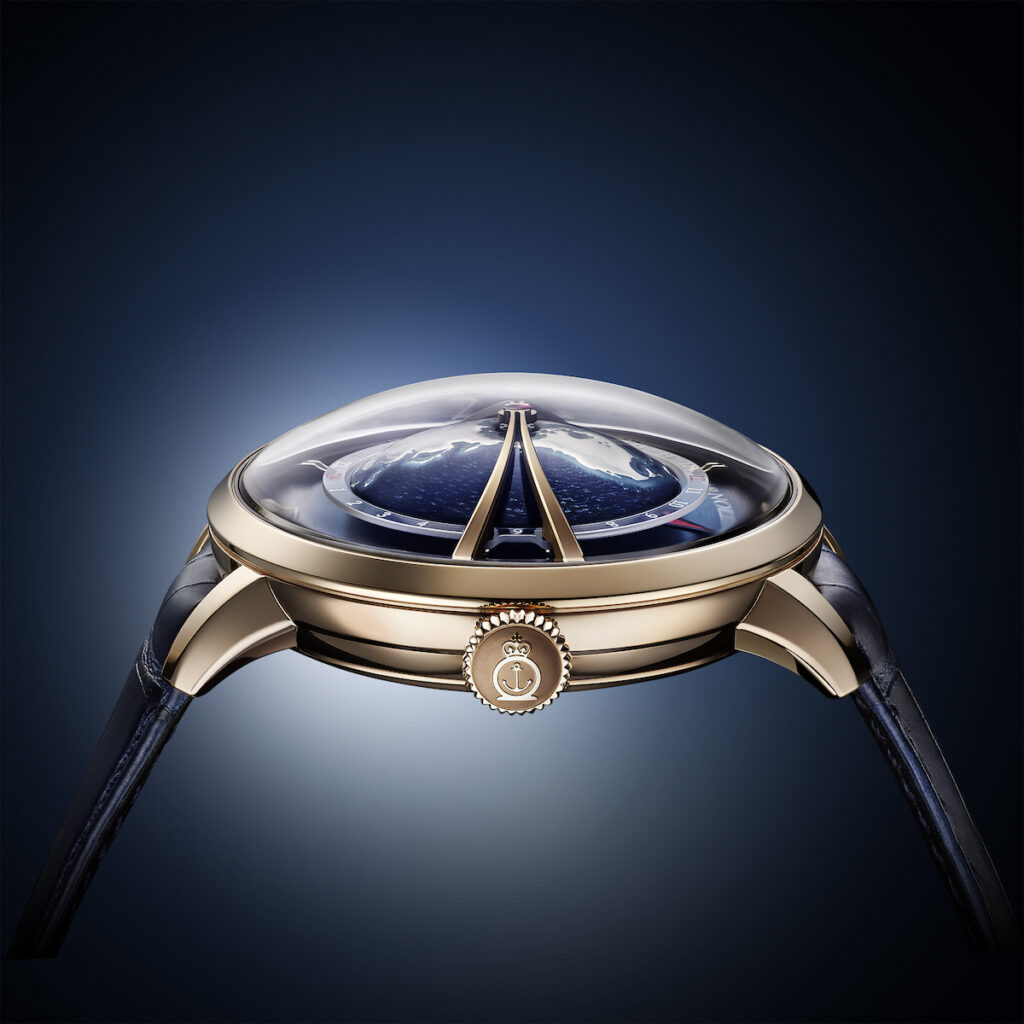 That arched bridge does more that catch the eye. It holds a functional ruby atop the domed Northern Hemisphere dial. Reading world times starts at the ruby, where the eye imagines the start of a longitude line that extends to the 24-hour sapphire ring that surrounds the dial. The wearer identifies local time simply by reading the red hands pointing to the gold indexes. 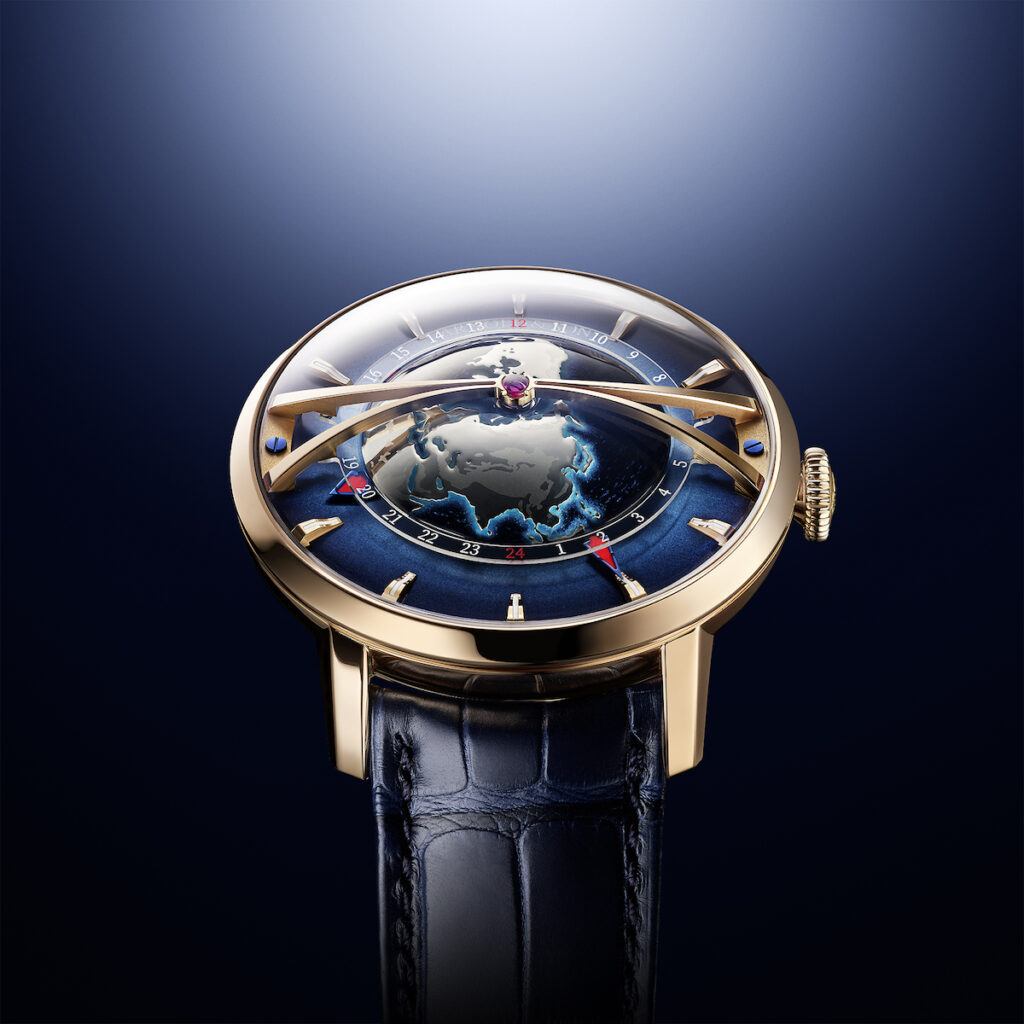 With this Globetrotter Gold, Arnold & Son enhanced the elegance of the Globetrotter with new accents of both gold and deep blue. The dial’s appliqué indexes are faceted in red gold (and also painted in SuperLuminova). Artisans have also painted the oceans with several coats of blue-pigmented lacquer enriched with pearlescent powder, which means their glow is richer than you might expect for such a small detail. Also, note that Arnold & Son has lightened the coastlines, adding more SuperLuminova to enhance their visiblity in the dark. In contrast, all the mountain ranges are matte finished. 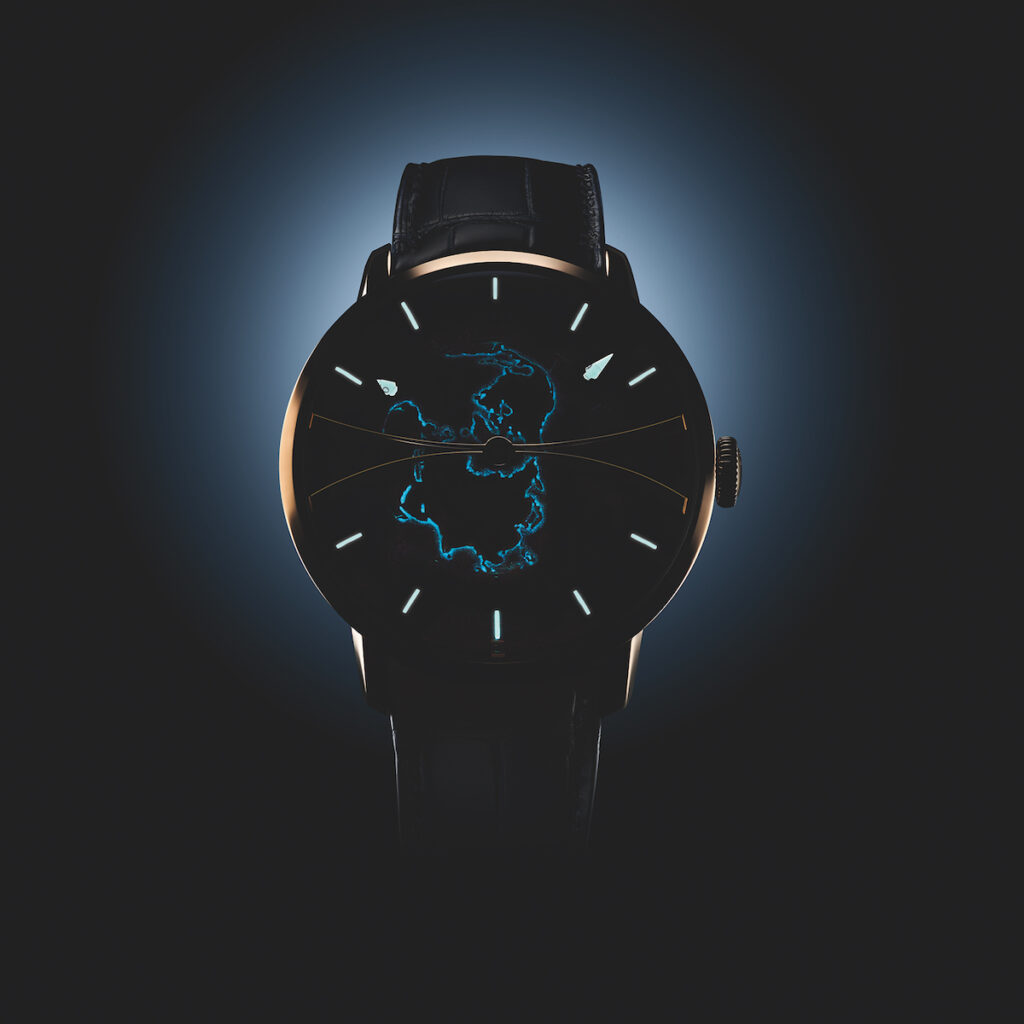 Look for equally fine finishing on the in-house automatic caliber A&S6022, which is visible through the sapphire back. The movement’s 22-karat gold oscillating weight is skeletonized and features the Clou de Paris guilloché pattern. For an added touch of elegance, the brand’s finishers have matched the high-quality anthracite movement plating to the red gold case. 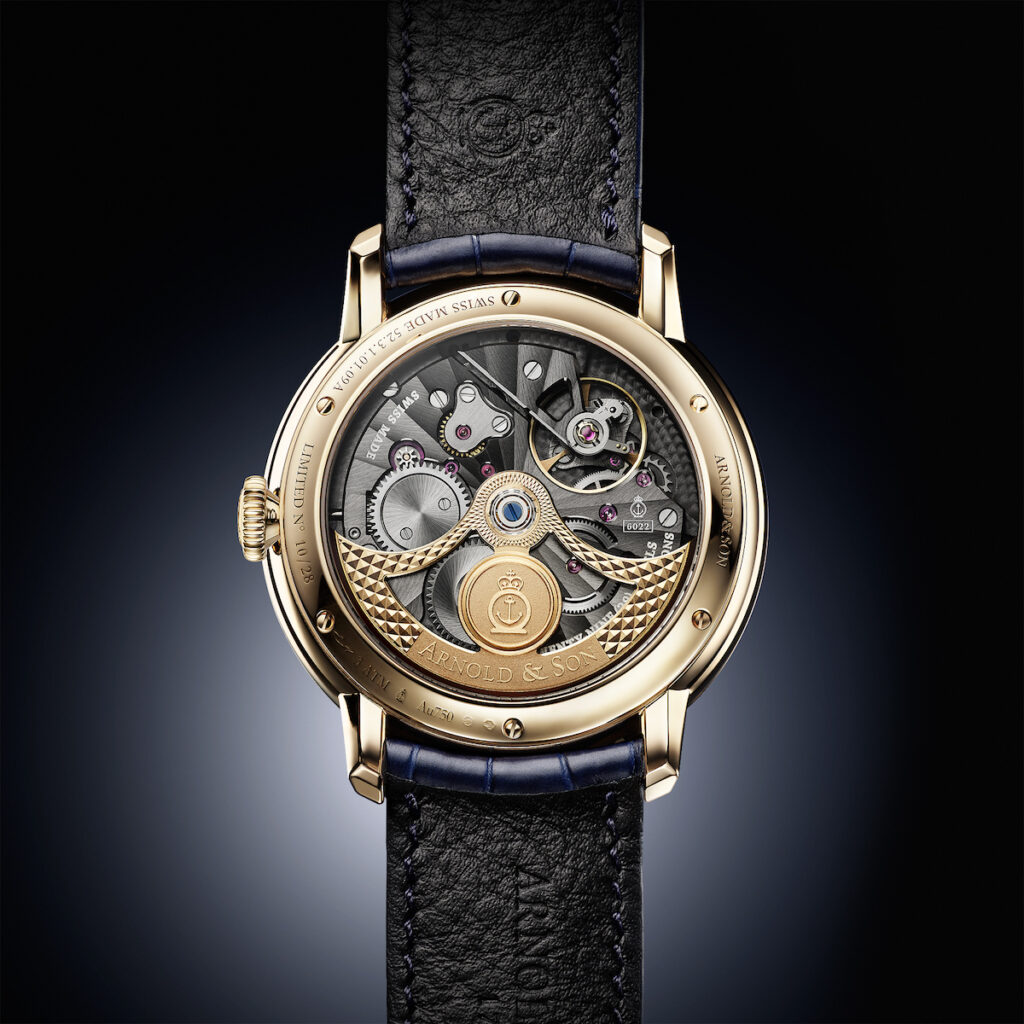 MB&F has expanded and updated its popular Legacy Machine 101 collection, which features one of the independent watchmaker’s most compact (40mm) creations and the first to be powered by a movement entirely designed and built by the watchmaker’s own engineering team.

A dramatic suspended balance wheel still dominates the LM101, but this latest design enhances the dial display with a double hairspring. You might recognize the addition: It’s the same hairspring found in the LM101 MB&F x H. Moser collaboration, which sold out quickly after its debut last year. 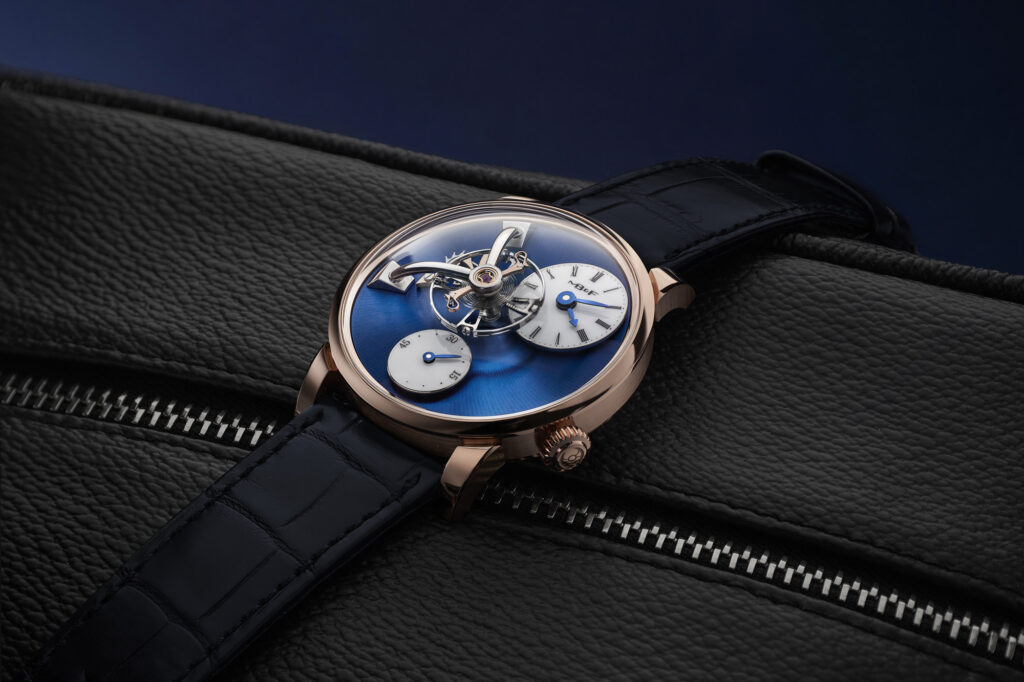 Reading the time and the power reserve on the new LM101 is also made easier thanks to larger subdials and a slimmer bezel than we’ve seen on previous versions of the watch. Underneath the new hairspring and larger subdials MB&F is offering a new dial for this latest LM101. 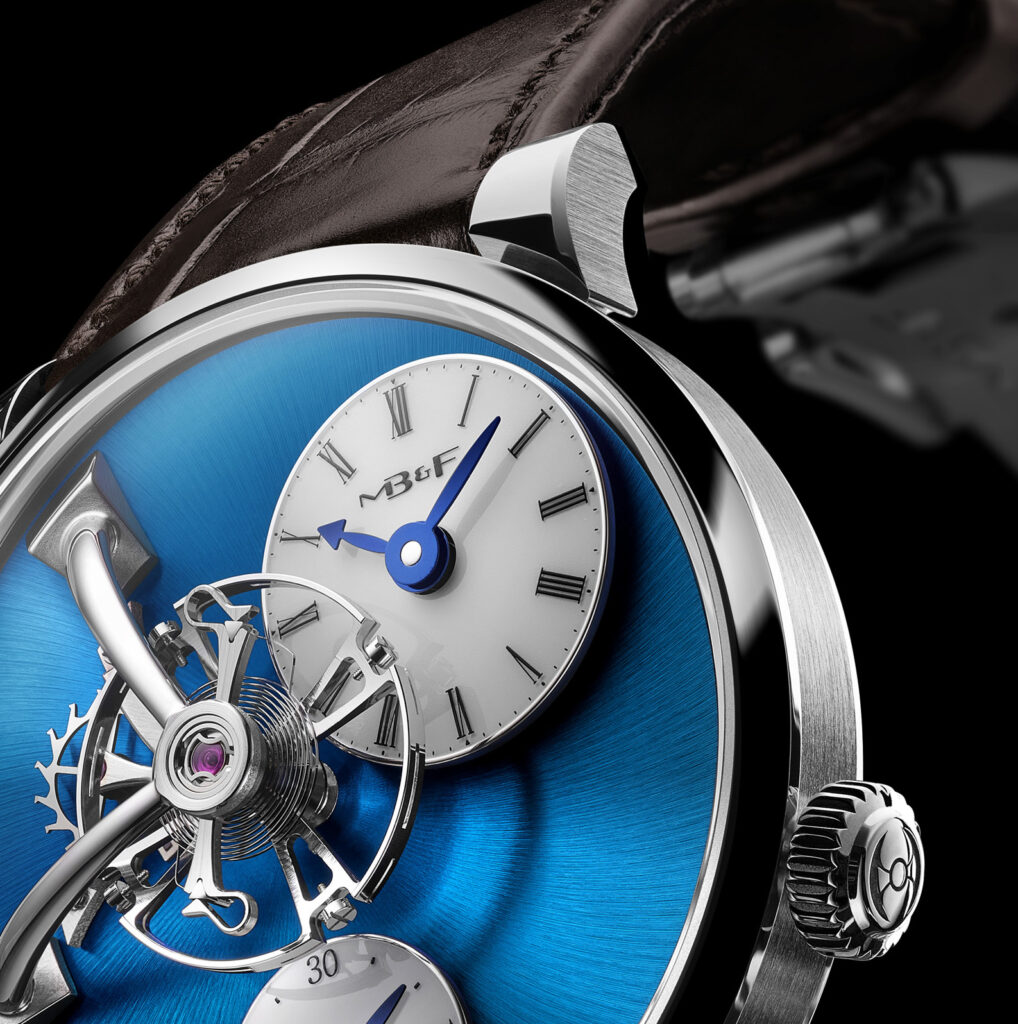 In addition to the three new lacquered dial colors, note the new finely engraved sunray pattern, which MB&F places directly on top of the movement plate. 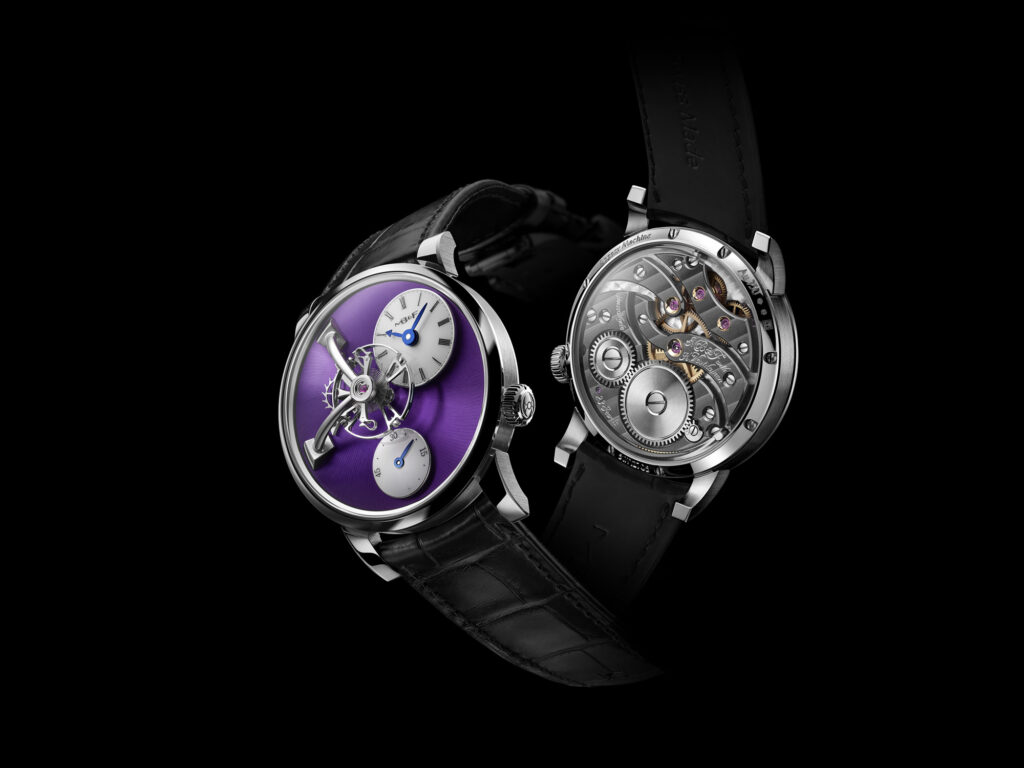 And finally, one of the three LM101 debuts is cased in steel, which MB&F utilizes fairly infrequently as a case material. The debut includes three editions: white gold with a striking purple dial, red gold with a handsome dark blue dial ($68,000) and in a stainless steel case with a light blue dial ($56,000).

Case: 40mm x16mm in white gold, red gold and stainless steel. High domed crystal sapphire on top and box sapphire crystal on back, both with anti-reflective coating on both sides.

Strap: Hand-stitched alligator or veal strap with buckle to match the case.