The latest desk clock to emerge from the collaboration of designers and technicians at MB&F and L’Epée 1839 looks like a polished eyeball. But when opened, the timepiece, an inventive 6.7-inch round desk clock called the Orb, takes the shape of either a blooming flower or a shiny beetle spreading its wings.

The wings, or elytra, which is the technical word for a beetle’s protective wing covers, can be closed or opened. However they are posed, the wings frame and support a new, exposed hour-striking clockwork based on a similar mechanism L’Epée 1839 also fits into its carriage clocks. 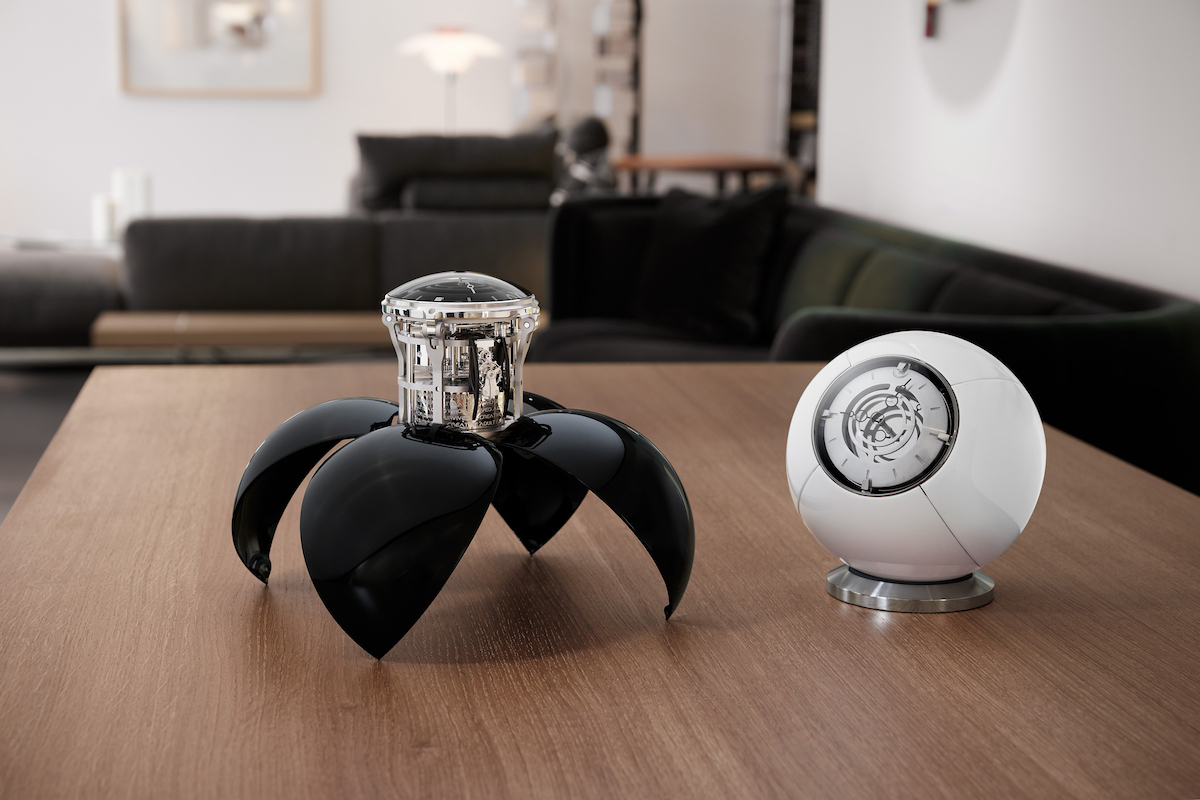 The eight-day clock, which will chime each hour, can morph as desired as it rests on the owner’s desk. Placed on its stand, or ‘saucer’ (so it doesn’t roll away), the Orb can be displayed closed or with any number of its four ‘wings’ opened.

Those wings don’t simply open up however. They can also swivel to display the Orb in one of several other positions. Opening all four wings means the Orb’s gears and dial can perch high atop the wings, as if rising from the center of a black or white flower. 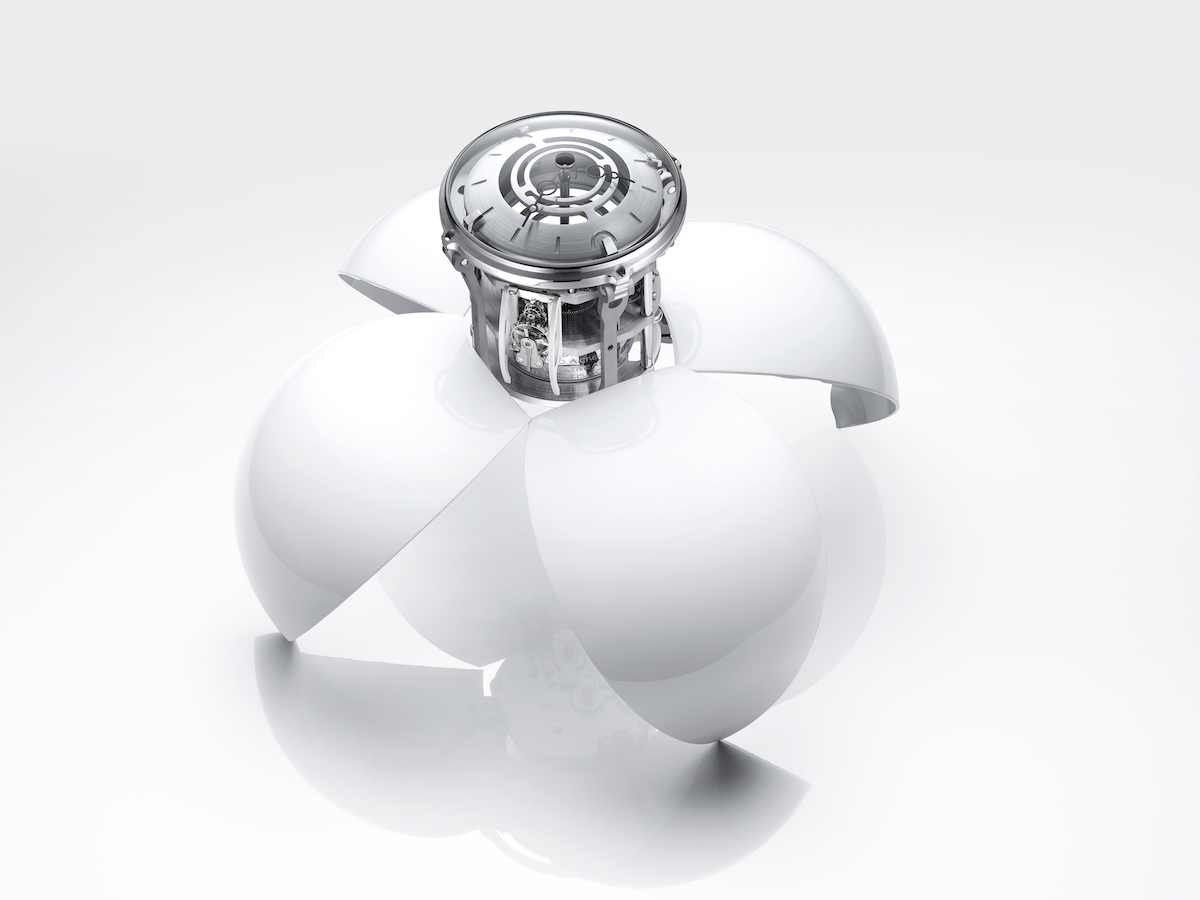 MB&F explains that the Orb begins its manufacturing process as a solid block of aluminum that is then hollowed to create a sphere. “Once cut, the elytra are then coated with several layers of lacquer that are hardened in a kiln to create the brilliant finish,” according to MB&F. Artisans then solder hinges onto the wings and attach small magnets on the interior of each tip to keep the shape of a perfect sphere.

A beautiful L’Epée 1839 hour-striking clock movement can be seen below the Orb’s curved aluminum dial, which is covered by a domed mineral glass. The movement is powered with two barrels, one for the time and the other for the striking of the hours. The hour mechanism indicates the actual hour, mimicking a church clock. This function can also be repeated on demand via a button on the side of the clock, or turned on and off as desired.

The idea for the Orb comes from German designer Maximilian Maertens, who started his artistic career at MB&F as an intern before starting a design studio in Berlin. Maertens also worked with MB&F and L’Epée on the T-Rex clock. 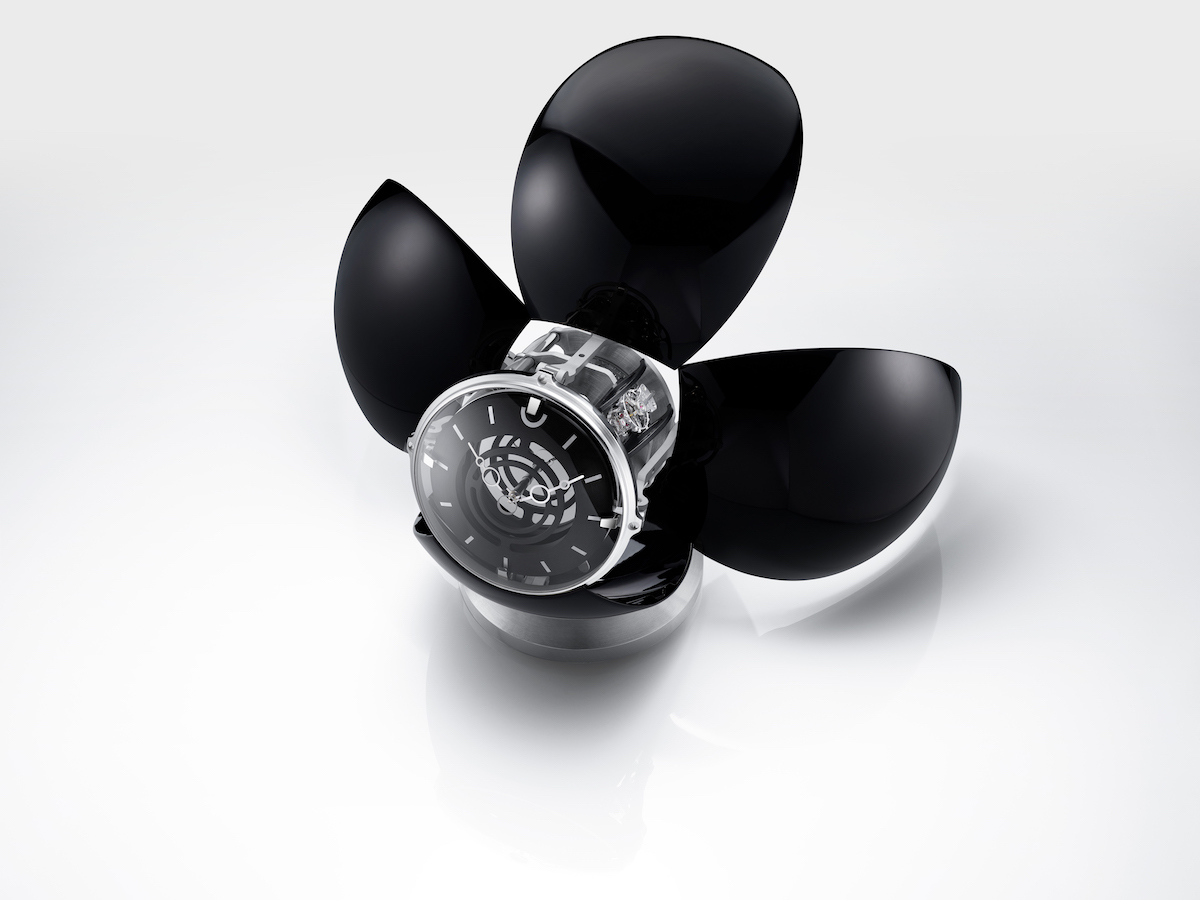 MB&F is making the Orb available in limited editions of fifty pieces each in white or black. Price: CHF 28,000.

(A limited edition of 50 pieces each in white or black.)

Display: Hours and minutes, striking hour, repeated on demand via a button on the side of the clock, or turned on and off if required.

Alongside a new dive watch (Diver X Skeleton) and a new chiming watch (the Blast Hourstriker), Ulysse Nardin just ahead of Watches & Wonders 2021 debuts UFO, a table clock that literally rocks as it displays time on three dials, all under a glass dome.

We’ll provide details about the watches in upcoming posts. Below we help you identify the new Ulysse Nardin UFO.

Teaming with Swiss clockmaker Maison L’Epée, well known in recent years for its whimsical collaborations with pioneering independent watchmaker MB&F, Ulysse Nardin has constructed UFO, a sixteen-pound, 10.3-inch tall aluminum and glass clock built with a rounded base that allows the clock to swing from side to side like mechanical waves around its axis. The UFO swings up to 60° from its axis – an amplitude of 120 degrees, with no affect on its precision. 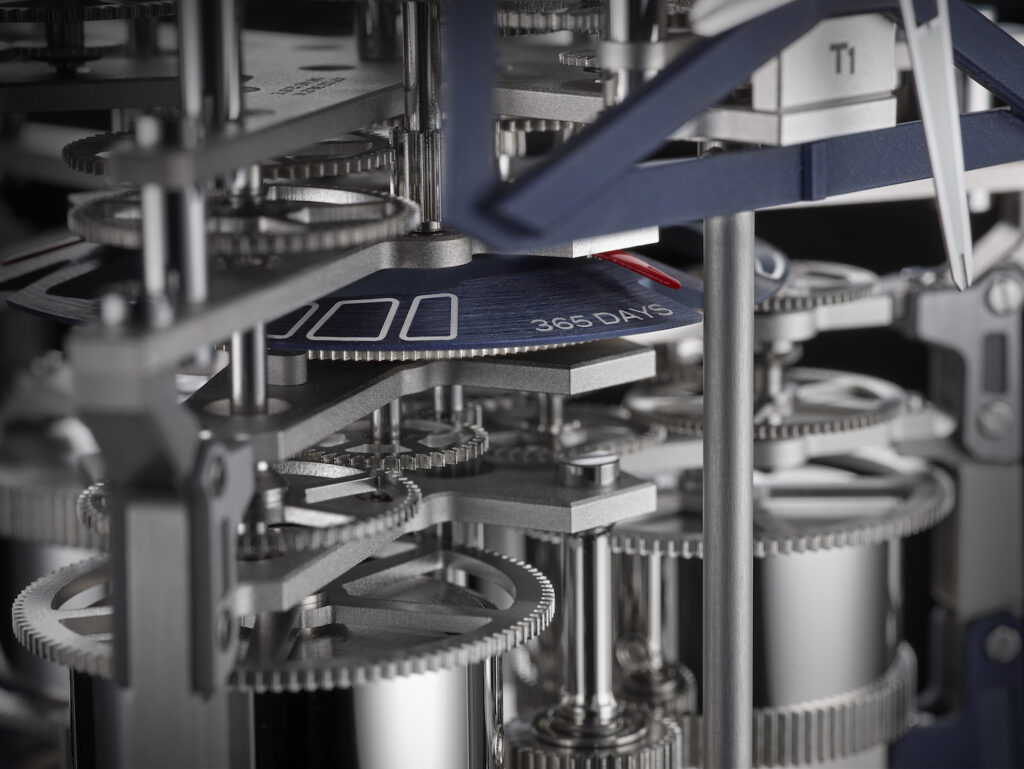 The clock’s imbalance and swinging motion is meant to conjure images of the perpetual movement of the ocean. Ulysse Nardin’s 175-year history, which this clock honors, includes more than a century of making award-winning marine chronometers.

The clock’s ‘imbalance’ starts with a blue half-spherical aluminum base fitted with a tungsten mass. The base and glass bell are connected to a bayonet mounting system, which echoes marine chronometer construction where the top glass could be unscrewed.

Romain Montero, a 26-year-old artisan glass blower who works for the Swiss-based Verre et Quartz, a technical glass-blowing workshop near Lake Neuchâtel, creates each glass cover by hand. The process is labor-intensive, and for each cover finished, two others were attempted without success, according to Ulysse Nardin.

L’Epée requires 663 components, and plenty of time, to build each UFO, with the three trapezoidal dials being among the clock’s most complex components to construct. According to the manufacturer it takes twenty-eight hours to manufacture eight of the dials. Three are placed into the UFO, which allows the owner to display three different time zones at once, each seen from a different angle.

The three blue-hued dials face outward around the top the clockworks, which are fully visible. And among the many spectacular sights within the clock are the six massive barrels that confer an incredible year of power reserve when fully wound with forty turns of a key. Each dial has its wind-up notch, which is also used to the set the time (four notches in total, one for winding up and one for each time zone wound up using a single key).

At the top of the movement L’Epee and Ulysse Nardin have installed a dramatic slow-beat, large-diameter (49mm) brass balance wheel. The size and the leisurely 3,600 bph frequency (one per second) of the balance is meant to both soothe the viewer while also contributing to movement’s ultra-long power reserve. And to put a finer point on the clock’s meditative rate, you’ll find a dead-beat second indicator just below the balance. 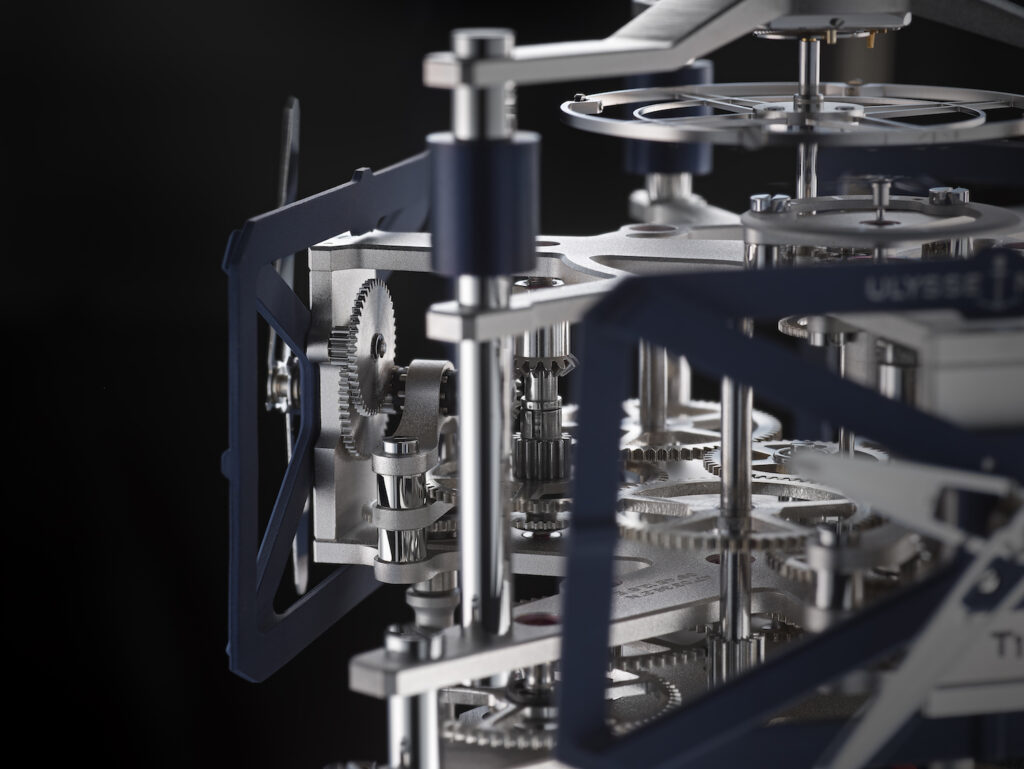 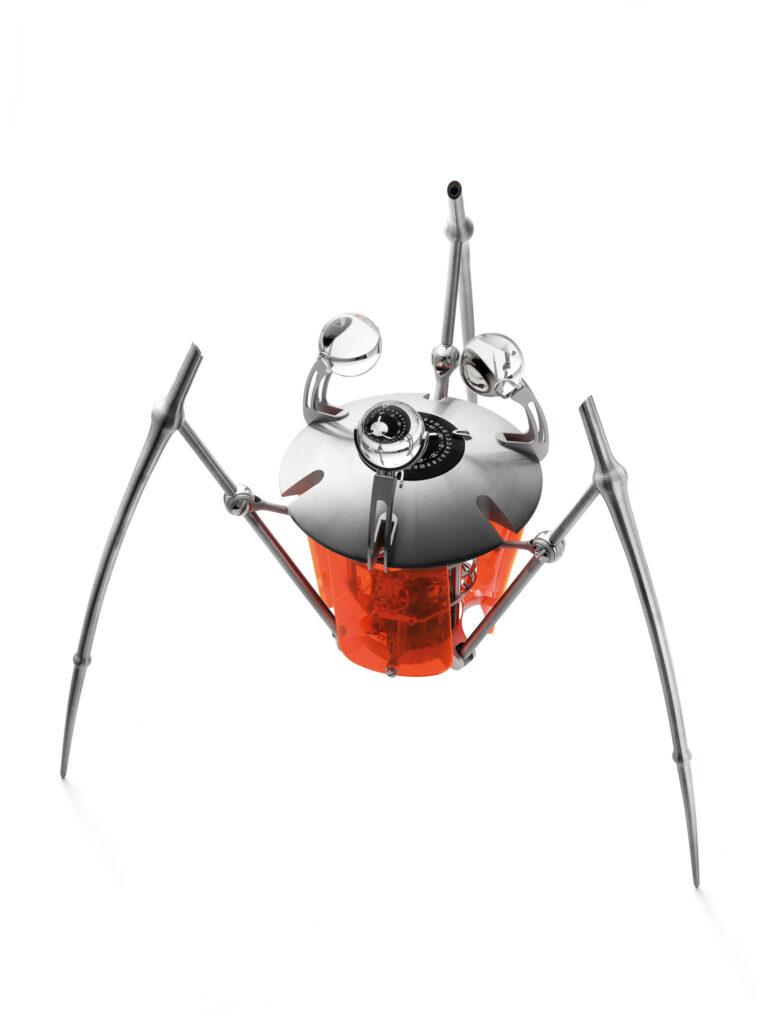 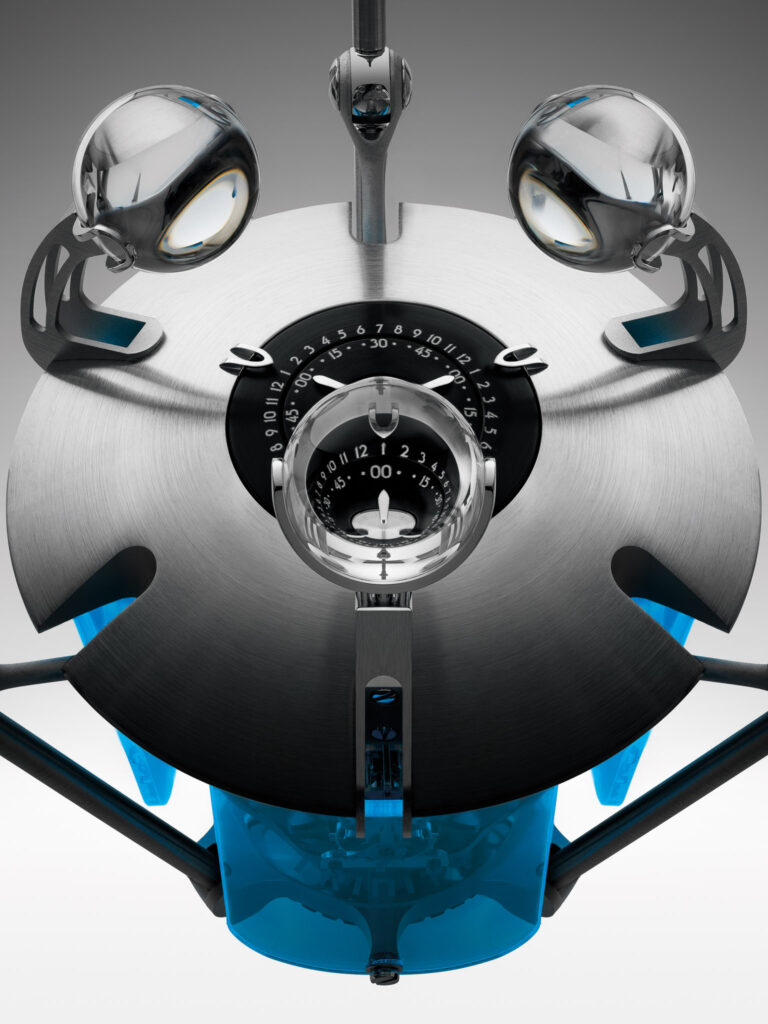 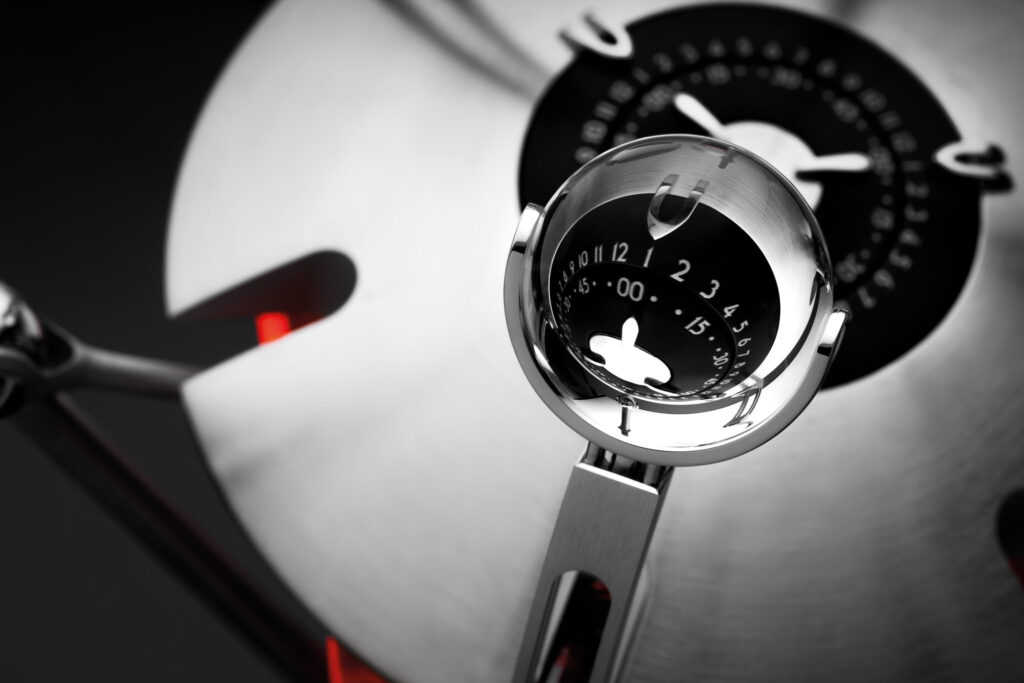 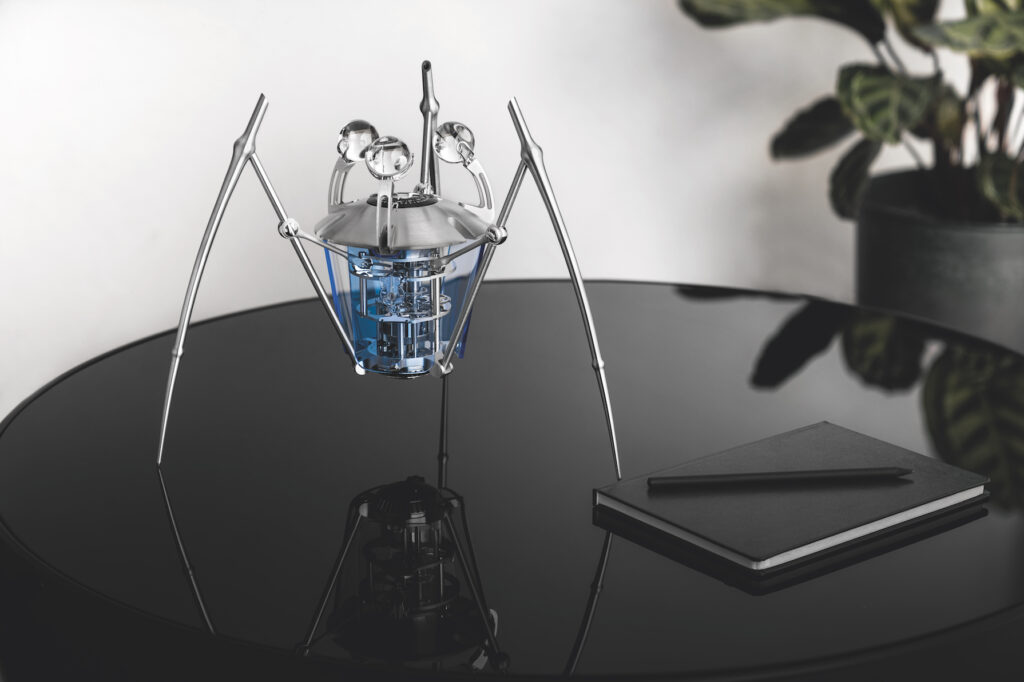 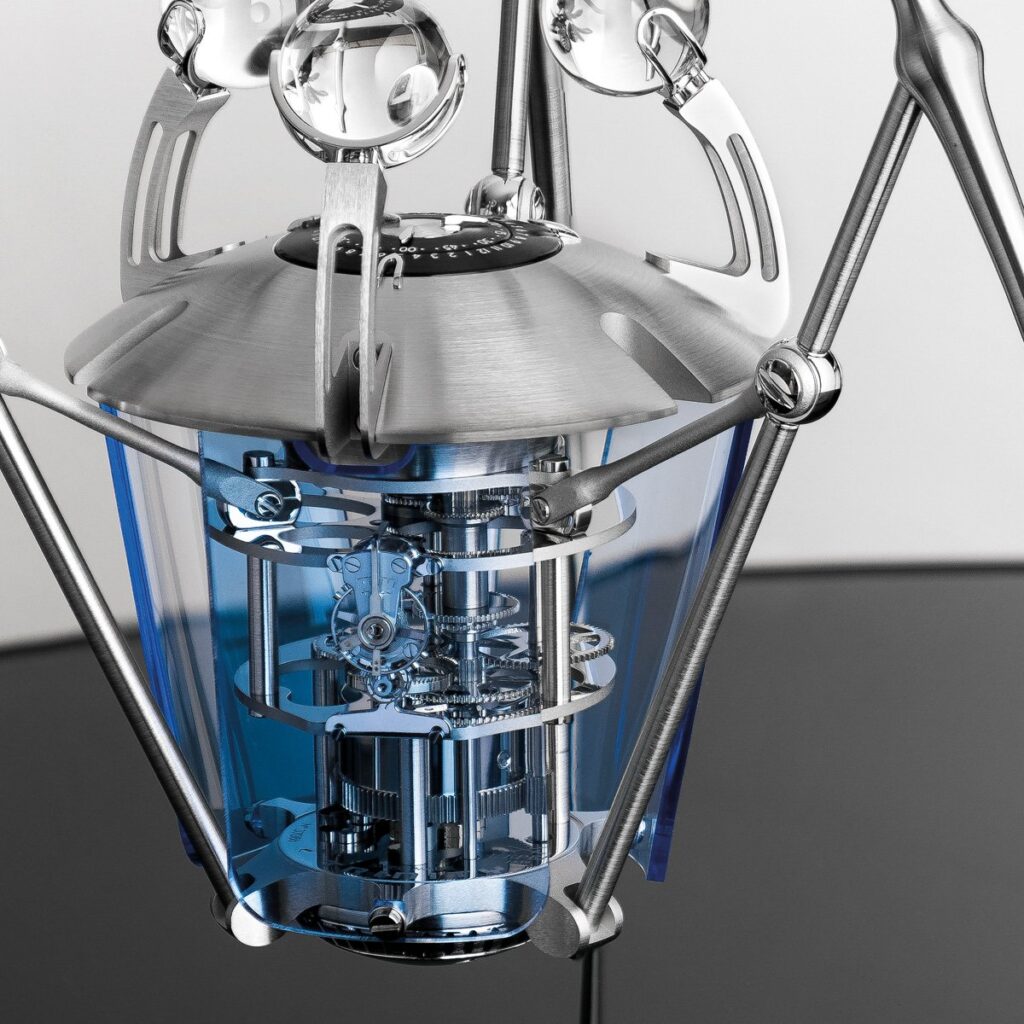 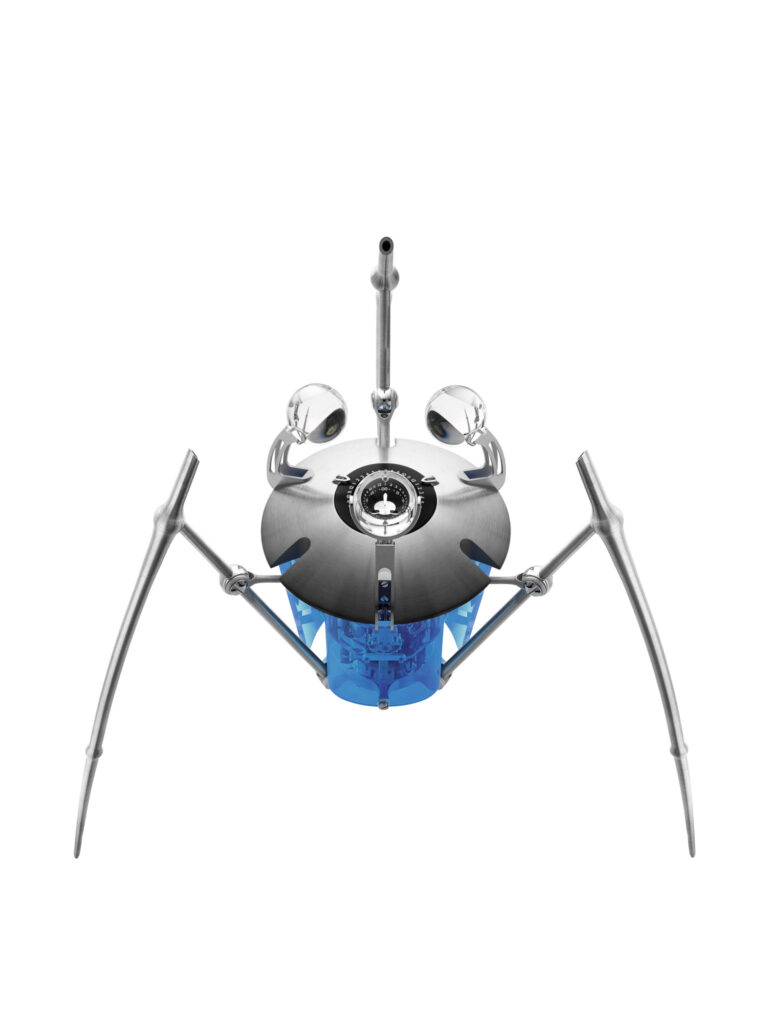 As if ported through a wormhole, MB&F’s Starfleet Explorer arrives to earth just as time itself seems to have stalled. The new desk-sized steel clock displays hours and minutes atop a skeletonized steel frame that supports an engaging, palladium-treated eight-day L’Epée 1839 movement. 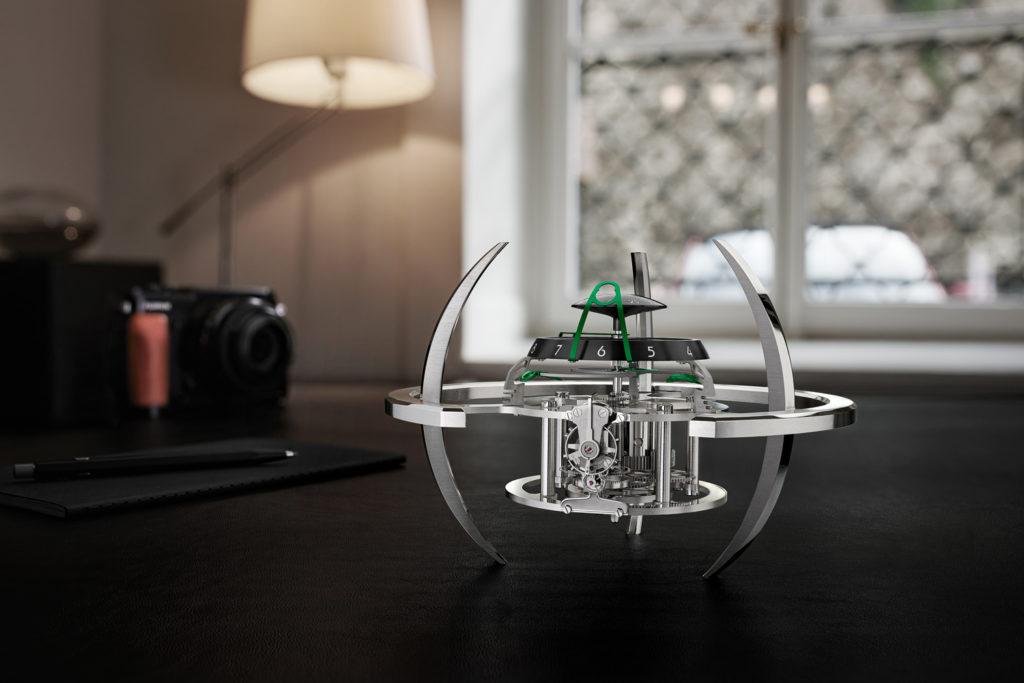 Essentially a compact version of the 2014 Starfleet Machine (the first clock co-created by MB&F and L’Epée 1839), this new co-created skeletonized ‘space station’ utilizes its smaller frame wisely with a topside display showing the hours and minutes. Two darkened rotating discs at the top of the clock perform this task with clarity. 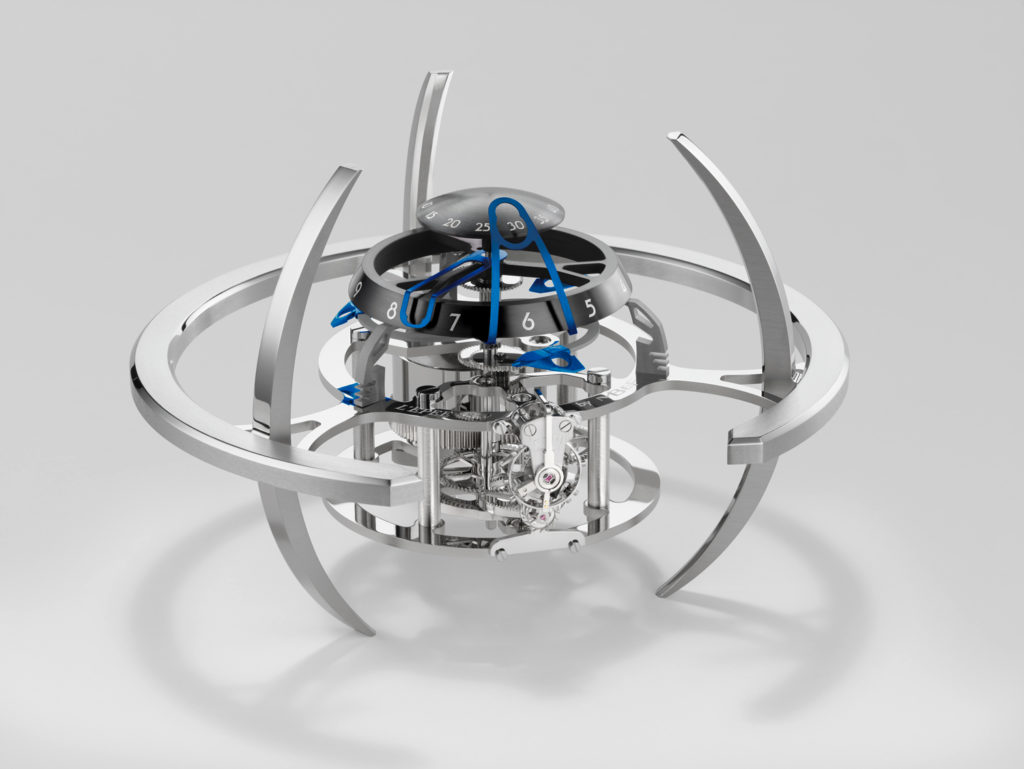 At the very peak you’ll see the minutes, shown digitally in five-minute intervals, as they rotate and appear within a curved, green, blue or red metallic window (or aperture, in tech speak). The Starfleet Explorer indicates the hours using a (matching) colorful hand along a ring just below the minutes.

But, as with so many of its creations, MB&F provides an extra treat within the clock’s steel skeleton. Below the two darkened time-telling discs MB&F has designed (and L’Epée has realized) three colorful ‘spacecraft’ that rotate around the center of the clock in a fanciful table-side five-minute ‘orbit.’

Just below all the time displays and fantastical spacecraft you’ll see that the L’Epée 1839 in-house eight-day movement is placed horizontally despite the vertically positioned escapement. This means viewers can easily eye the to-and-fro of the balance wheel, escape wheel and pallet-lever.

All the gearing (steel or palladium-treated brass) is also quite visible just beyond the regulation mechanism, in large part thanks to the C-shaped steel frame. 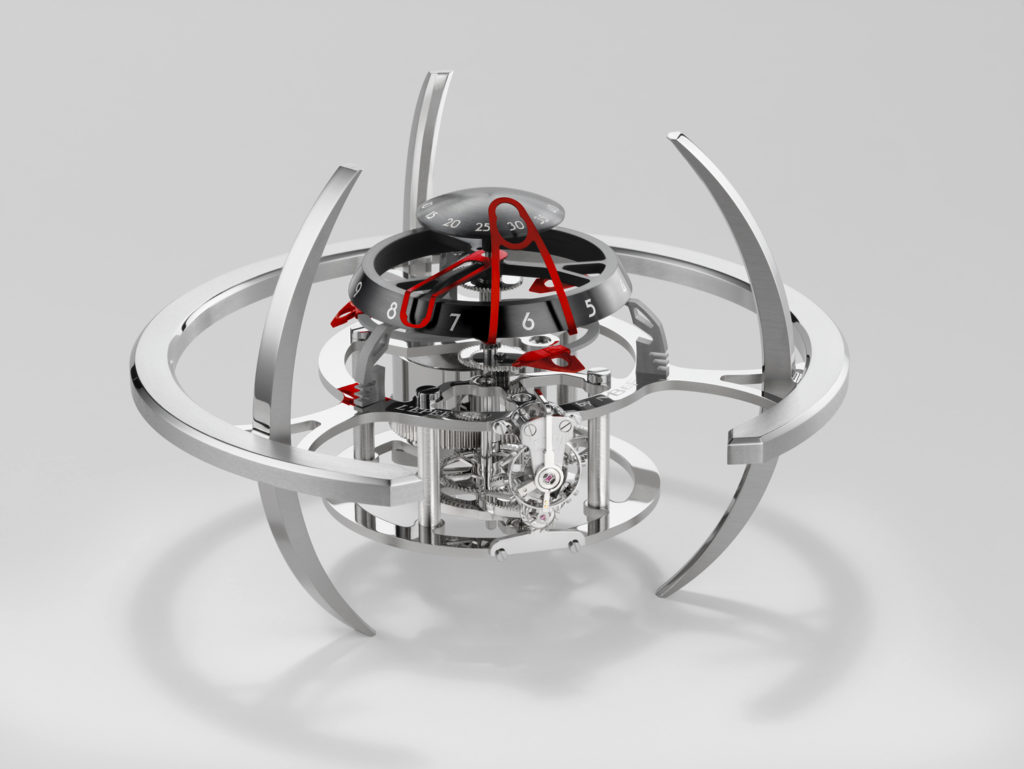 MB&F was kind enough to design the Starfleet Explorer so that it can be displayed in two different poses: on its three massive curved steel legs or turned sideways with its open-end resting on the desk. Of course, the clock can also be turned upside down if desired, a feature that helps when winding or setting time on the clock.

MB&F is launching the Starfleet Explorer as three limited editions of 99 pieces each in blue, green and red.

–Minutes: indicated by a fixed curved aperture on the mobile upper dome, performing a complete rotation every 60 minutes. The minutes aperture and the hour hand are satin-brushed and anodized, in blue, green or red.

–Hours: indicated by a mobile hand, performing a complete rotation every 12 hours on a fixed disc. The hour dome and the minutes disc are satin-brushed and feature MB&F’s signature numerals.

Materials: stainless steel for the main structure, hand-lacquered polymer for the three ‘spacecraft.’