You might recall that when this high-end watchmaker first showed the world the GMT Sport in 2019, the watch’s distinctive ovoid bezel attracted just as much attention as the watch’s new movement featuring such Greubel Forsey specialties as a Tourbillon 24 Seconds and eye-catching three-dimensional GMT globe.

Likewise, the new bracelet here might garner outsized attention given its premiere status for this brand. Greubel Forsey has devised a three-link bracelet finished with many of the same styles we see on the 45mm-by-15.7mm case and bezel, notably straight graining, frosting and top-tier hand-polished beveling. 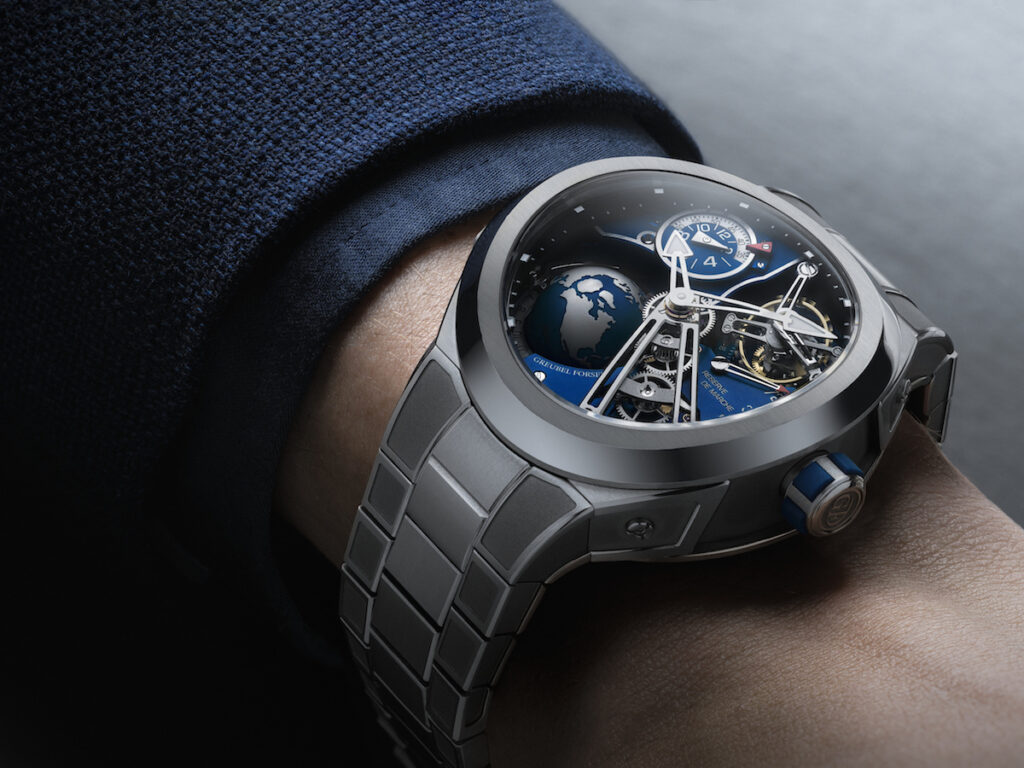 Greubel Forsey notes that it opted to frost-finish the lugs to better emphasize how the case and bracelet link directly along an uninterrupted row. The somewhat darker frosting continues along both edges of the bracelet as well, underscoring the visual unity of the two components.

Functionally, the bracelet features a fine adjustment system that allows the wearer to quickly loosen or tighten the bracelet’s fit. The watch will also arrive with a blue rubber strap with text in relief and a titanium folding clasp with engraved logo.

While adding a bracelet to the GMT Sport, Greubel Forsey has also removed something: The GMT Sport’s wide, undulating bezel is now free of the raised engraved text espousing the brand’s values. Instead, the elliptical bezel, which curves gently at 12 o’clock and 6 o’clock, is cleaner, sporting expert hand-finished horizontal straight graining on top and a hand-polished frame.

Thus, instead of reading words like ‘perfection’ and ‘harmonie’, the wearer can focus on the GMT Sport’s intricate, multi-dimensional dial components and displays amid the bright new blue and titanium color scheme. 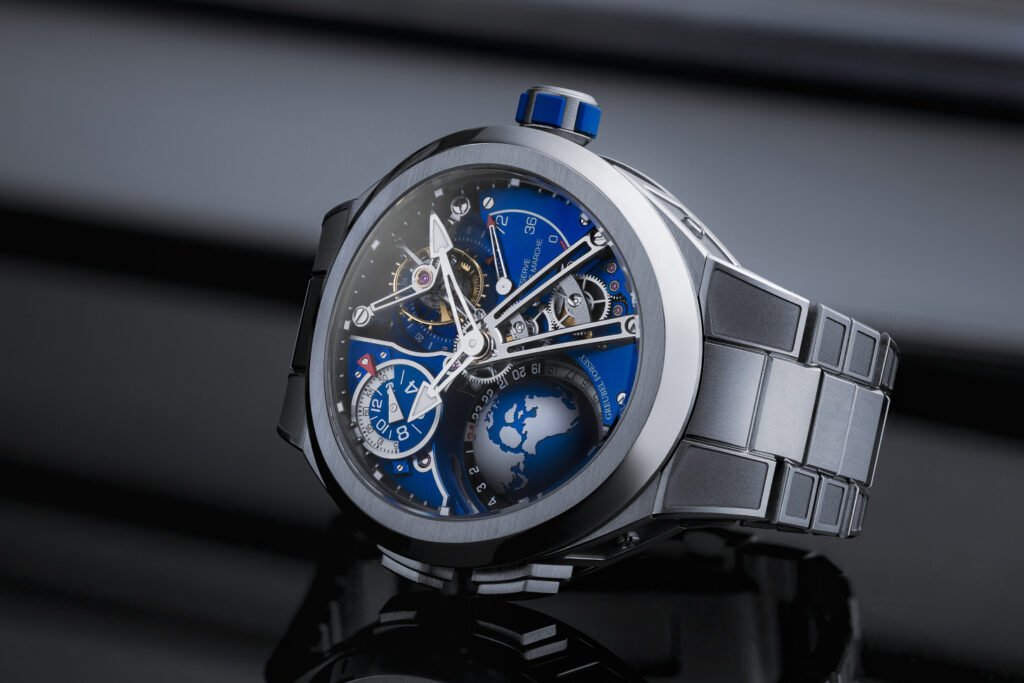 Indeed, the new color scheme of this GMT Sport highlights a matte blue finish on the mainplate, bridges, globe, second time zone dial and 24-second indicator ring of the Tourbillon 24 Seconds. The color nicely contrasts with the polished components of the steel and titanium movement components.

The blue color splashes across the multi-level dial plates, replacing the dark grey hue of the previous GMT Sport. Between the blue plates wearers can check the time via a central hours and minutes display while eyeing a second time zone at 10 o’clock, a power reserve indicator at 3 o’clock and the GMT rotating terrestrial globe at 8 o’clock.

The GMT globe, first seen in 2011 and used within the GMT Black in 2015, displays the second time zone (as seen on the auxiliary dial just above at 10 o’clock). When the wearer combines this with the globe’s universal time display, he or she can read the current time anywhere in the world. And of course a wearer can enjoy the whirling Tourbillon 24 Secondes, positioned between 12 o’clock and 2 o’clock, which contributes to the watch’s high level of precision.

Greubel Forsey will make the new GMT Sport with the new titanium bracelet in a limited edition of thirty-three units. The price has not yet been announced, though the previous GMT Sport was priced at $500,000. 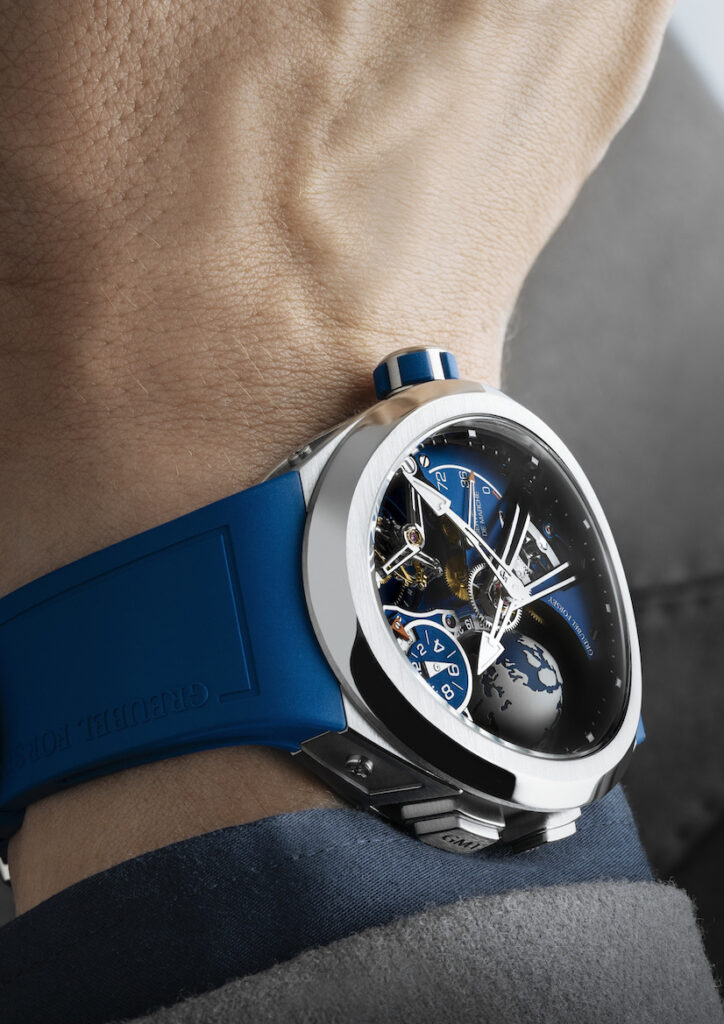 With its new case, the watch is one-third lighter than the original white gold model, which Greubel Forsey debuted in 2019. To complement that lightness, the watchmaker attaches a new rubber strap, which quite effectively enhances the modern profile of the watch, adding a touch of sportiness. (An alligator strap is also available.)

As noted, the new dial treatment maintains that message, with an electric-blue-hued hour ring and power reserve indicator.  Previously all black, the circular-grained hour ring retains its polished bevels, echoing the mainplate, which Greubel Forsey has made more contemporary with its own gray frosted and spotted finishing. The plate boasts a full complement of polished bevels and countersinks. 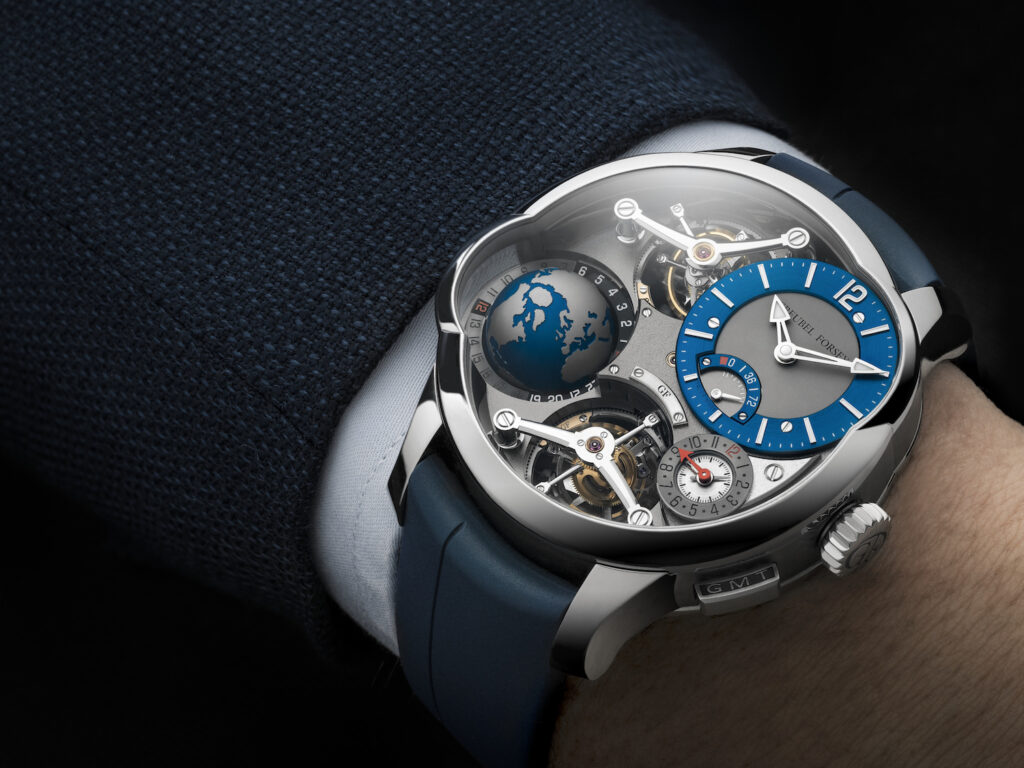 Greubel Forsey has also re-faced one of the watch’s many technical highlights: its titanium GMT globe. This miniature planet Earth, which Greubel Forsey debuted in 2011, now displays the continents amid newly bright blue seas, a livelier depiction than the globe rotating within the white gold GMT Quadruple Tourbillon two years ago.  The new ocean color nicely matches the new blue finish of the power reserve, hour circle and strap. 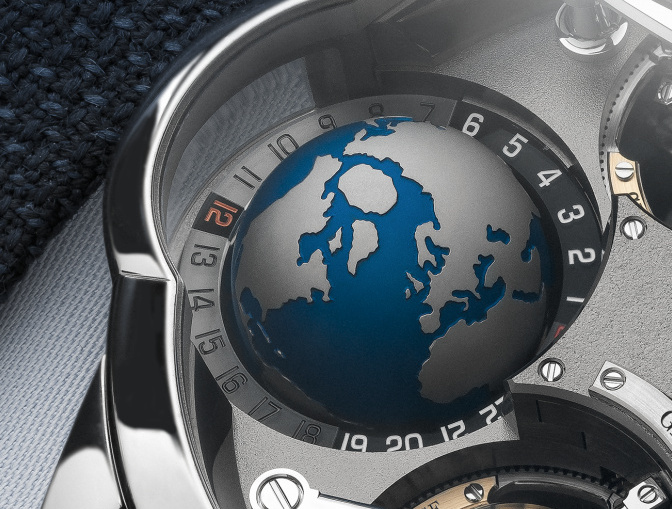 These cosmetic changes haven’t altered the globe’s dramatic time display. The Earth is surrounded by a fixed 24 hours ring around the Equator. This ring displays local time for all the longitudes and takes into account the day/night with an indicator. A peek through the side of the case, through a sapphire window adjacent to the globe, reveals a clear view of the Equator and the southern hemisphere.

Beyond the new livery, the latest Greubel Forsey GMT Quadruple Tourbillon remains a feast for the eyes. The multi-level, three-dimensional dial offers the main hours and minutes subdial at the highest point (between 1 o’clock and 2 o’clock), with the coaxial small seconds and second time zone at 4 o’clock forming the second highest point. 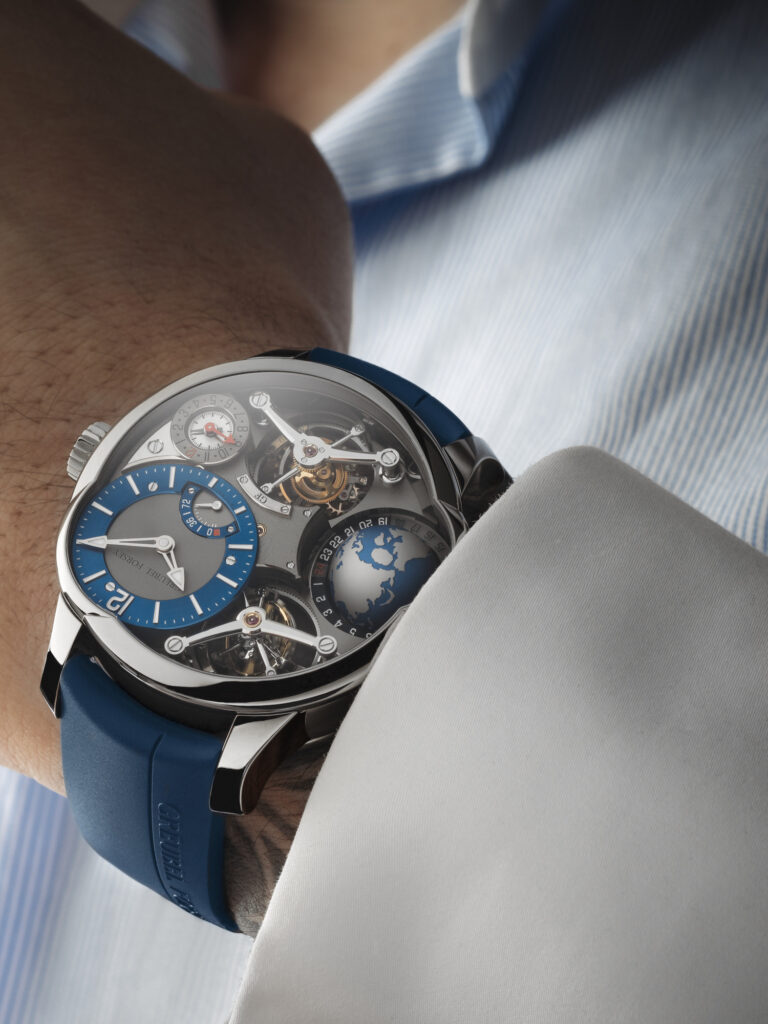 You may recall that each Double Tourbillon 30° features a first cage rotating in one minute and angled at 30°, fitted inside a second upright cage that rotates once in four minutes. Greubel Forsey explains that the combination of the inner cage inclination and the different rotational speeds of the two cages cancel any timing variations. A spherical differential transmits the average timing rate of all four of the tourbillon cages, improving their chronometric performance.

The back of the watch also delivers both awe and information. Universal time can be spied, with a fixed 24-hour scale showing day and night zones and a disk with abbreviations of twenty-four cities. The same disk also distinguishes between the time zones that utilize Daylight Saving Time and those that don’t. 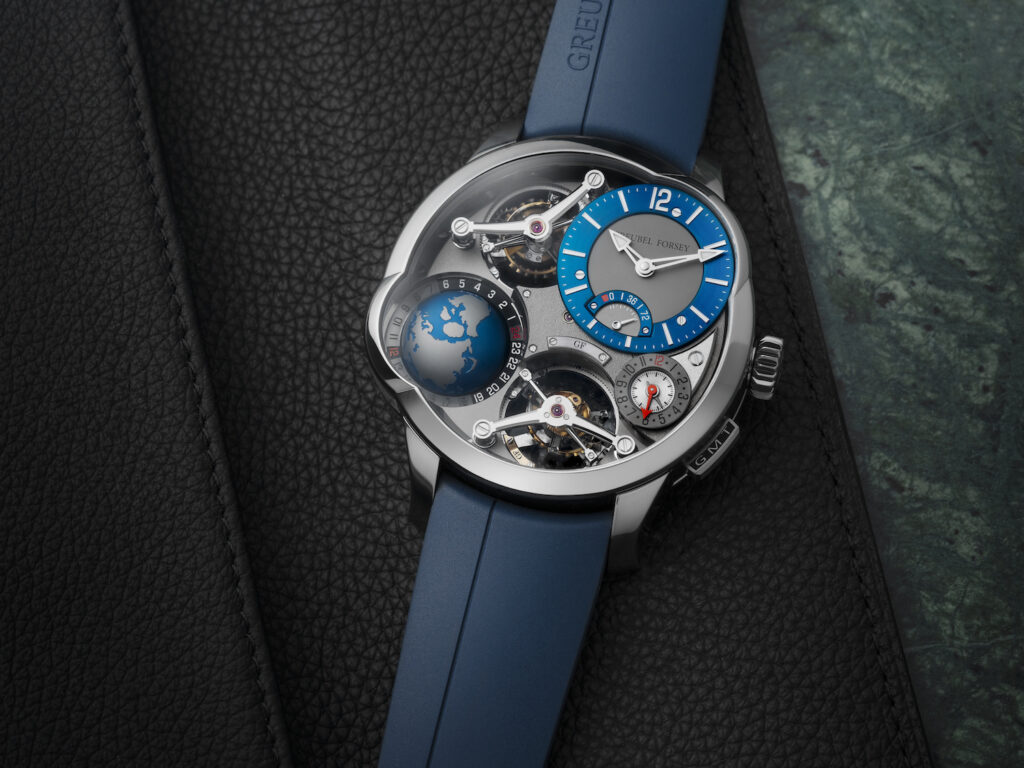 Greubel Forsey plans to make eleven examples of this new titanium-cased GMT Quadruple Tourbillon, each priced at 760,000 Swiss francs. The watch will be made, eventually, as an edition of sixty-six examples.

Greubel Forsey has re-engineered the unusual ovoid case it developed for the 2019 GMT Sport to develop the all-new Balancier S,  showcasing a large, high-precision inclined balance wheel and gear train.

Now fit with a new movement, the new, sleeker version of that ovoid case frames a dramatic double suspended arched bridge holding an inclined gear train, all adjacent to the large (12.6mm) inclined balance wheel that gives the watch its name.

The Balancier S’s balance, which parallels the lower dial portion and sits at a 30-degree angle, provides what Greubel Forsey terms an “outstanding solution for limiting timing errors due to the effects of gravity on the regulating organ (balance wheel, spring and escapement) in stable positions.” 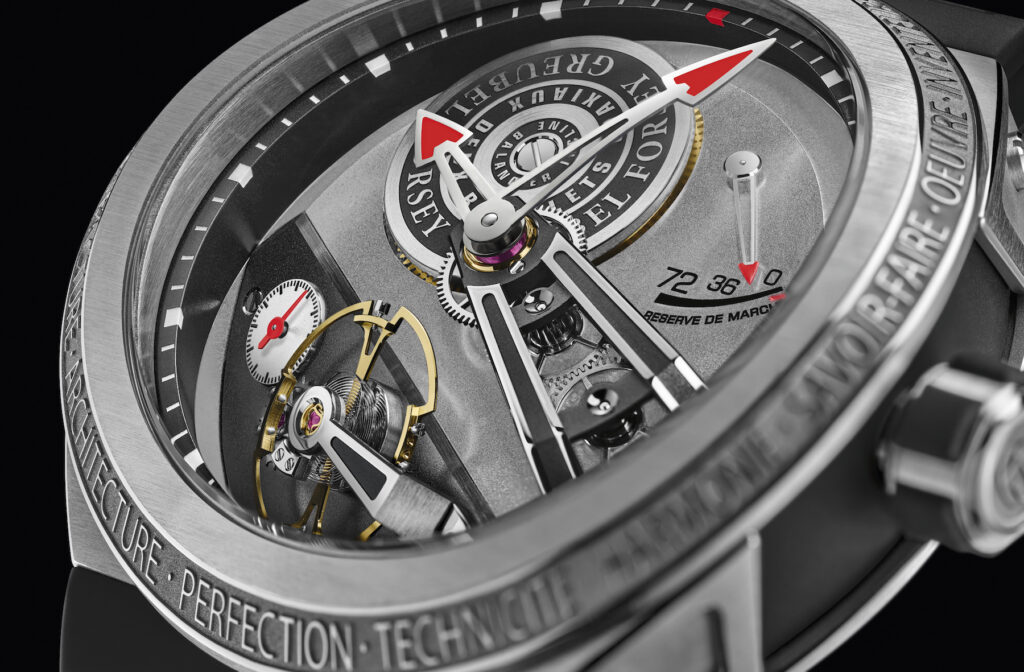 Recall that the watchmaker has utilized this escapement angle with great success within numerous tourbillon debuts in recent years, including the Tourbillon 24 Secondes, Quadruple Tourbillon and the Double Tourbillon 30°. For the first time however, we’re seeing the inclined balance alone rather than as a component within a tourbillon cage.

Like last year’s ovoid debut, the Balancier S appears circular from above, but once seen on the wrist betrays its extensive angular and curved attributes, including an oval, arched sapphire crystal, curved hour and minute hands, integrated lugs and strap and a satin-finished bezel engraved with the familiar script outlining Greubel Forsey’s ‘values.’ 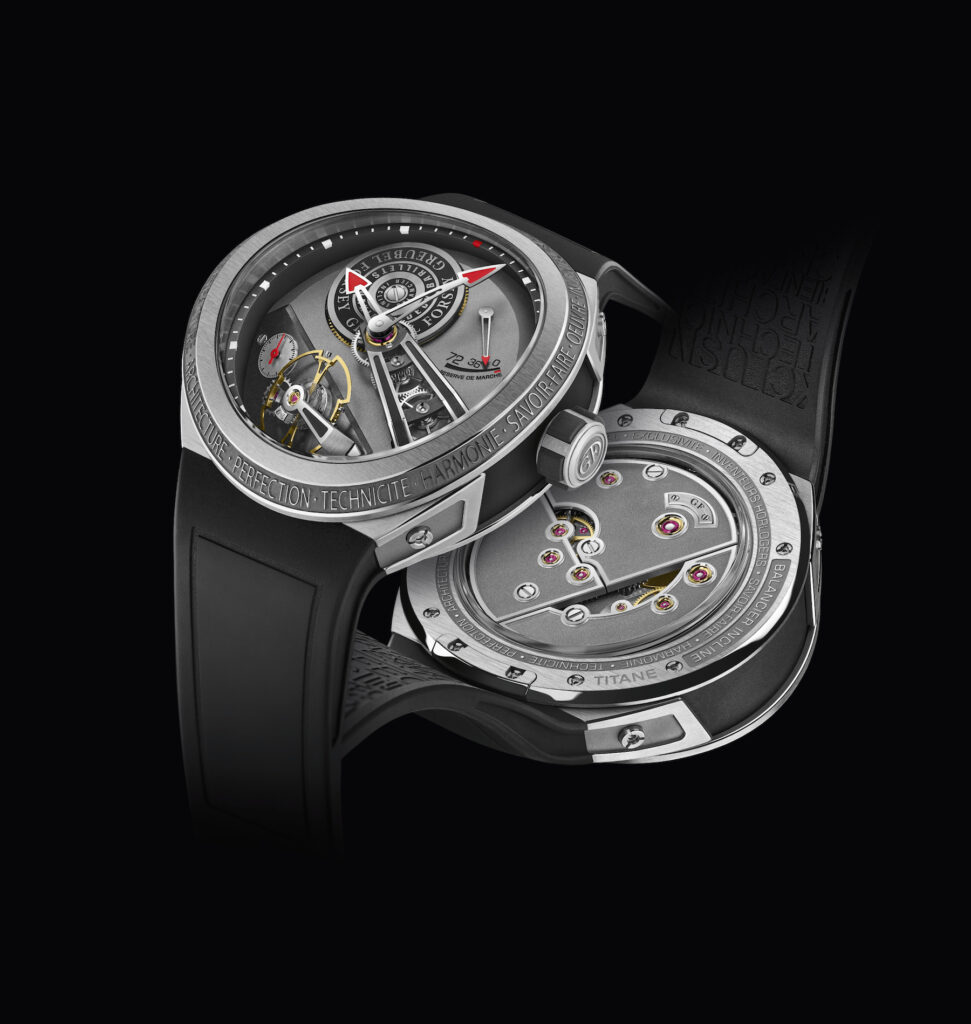 The new movement in the Balancier S operates with two coaxial barrels mounted in series offering a 72-hour power reserve (shown at 2 o’clock via a skeletonized red-tipped hand). A small seconds hand at 8 o’clock, also placed at a 30-degree angle, underscores the impressive depth Greubel Forsey built into this new caliber.

The watch’s unusual titanium case, sealed for 100 meters of water resistance, is echoed in a beautifully finished titanium mainplate and titanium bridges, which the watchmakers here say “proved much more difficult for manual hand-finishing than steel or even nickel silver.” Likewise, Greubel Forsey’s finishing reaches its usual high standards with extensive frosting, polished bevels and countersinks, circular and straight graining. 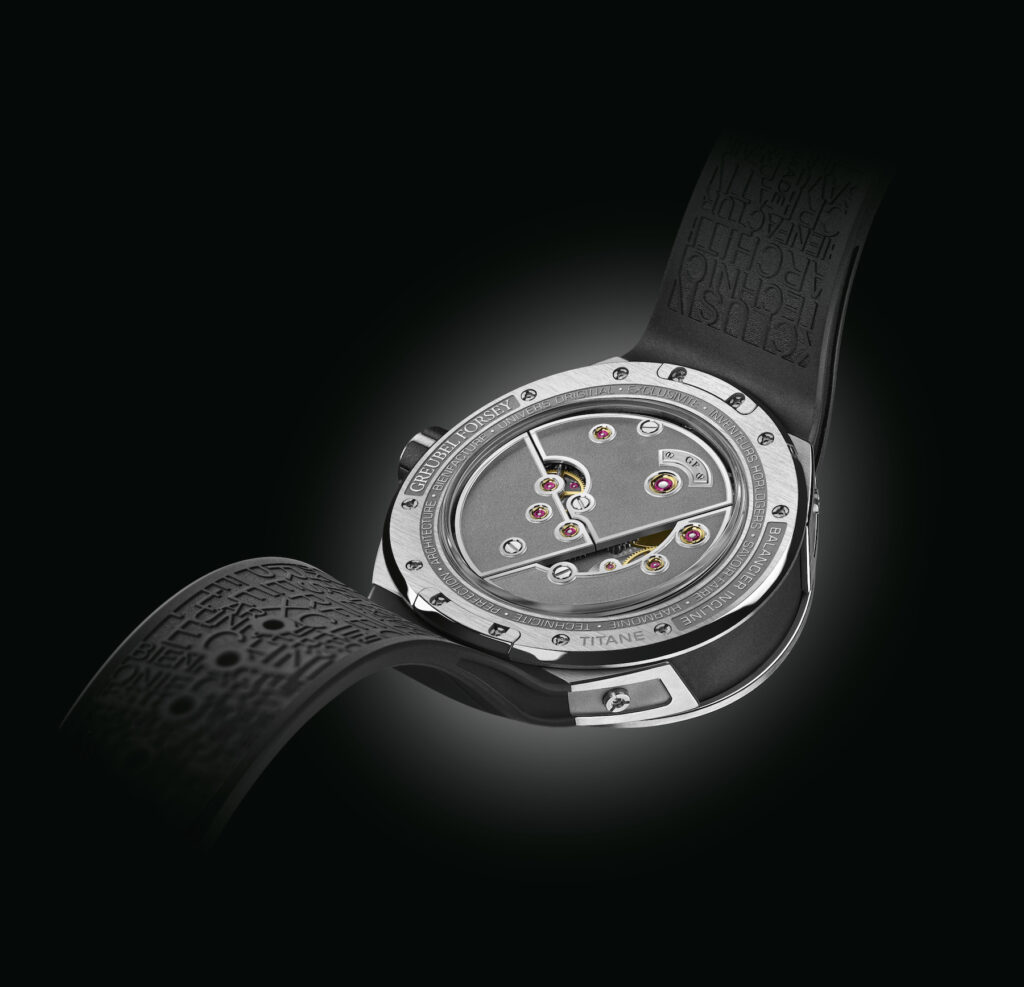 This Balancier S continues Greubel and Forsey’s foray into the sporty frontiers of high-end chronometry. Now that many collectors have made peace with the watch’s unusual ovoid case, expect many to look forward to additional sporty high-horology designs from this highly technical team. I already do.

Greubel Forsey debuts a red gold version of its QP à Équation, an ultra-complicated timepiece with complete perpetual calendar, tourbillon and equation of time function. The watch, which was awarded the Grand Prix d’Horlogerie de Genève award for the best Calendar in 2017, utilizes a type of ‘mechanical computer’ to manage all the changes in the displays.

This ‘computer,’ Greubel Forsey’s seventh invention, is an entirely integrated twenty-five-part component composed of a stack of cams with movable fingers that shift the indications on the dial and caseback. The month’s cam changes the month (seen on the front of the dial) and also moves the Equation of Time disc on the back. The years’ cam controls the leap year indication (front) and also the year and seasons on the back.

In summary, the dial side, now chocolate brown-colored, displays the 24 hours of the day and night, the day of the week, the large date, the month, the hours and the minutes; the movement side shows the equation of time and the seasons and the year. Price: $695,000.