In addition, the watchmaker has designed the bezels on both models to feature markers at every minute position, including the one at three o’clock to the right of the calendar frame, a slight change from existing diver models.

The latter watch provides heightened scratch and corrosion resistance, according to Grand Seiko, as well as a substantial weight reduction (about 30%) when compared to its stainless steel brother. Regardless of metal material, grand Seiko finishes each with contrasting hairline and Zaratsu-polished surfaces.

Both these dive watches are in full compliance with ISO dive watch standards, and even enhance these basic requirements with a magnetic resistance of 4,800 A/m. 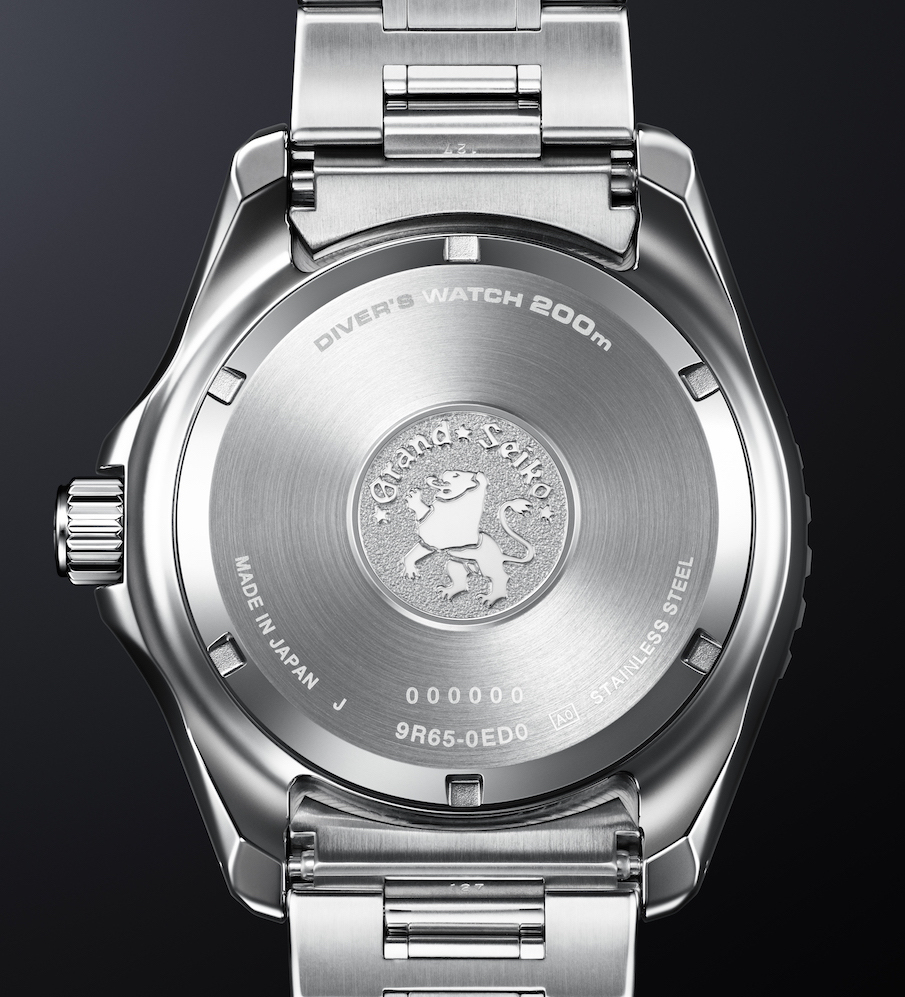 Inside each model Grand Seiko fits its superb Spring Drive 9R65 caliber, which combines a mainspring with quartz precision. 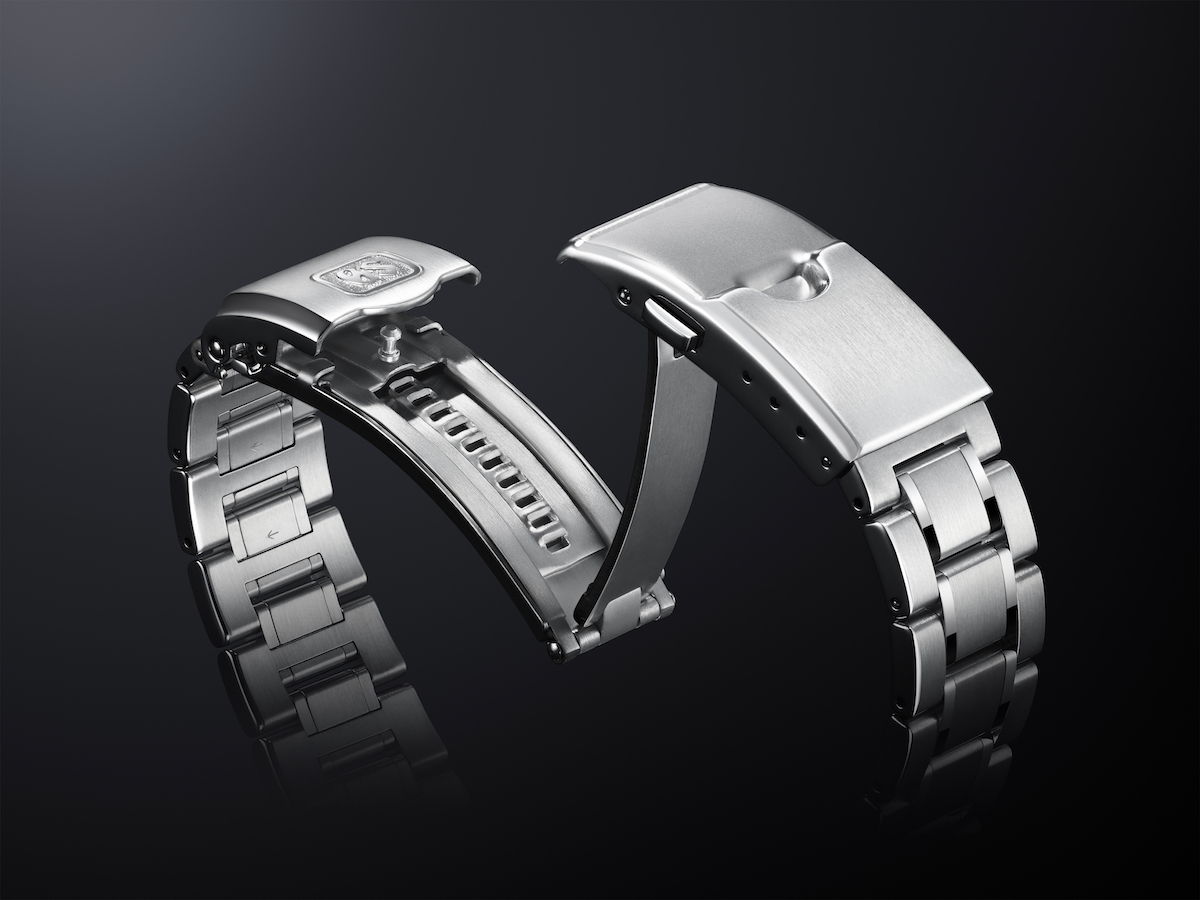 The patterned white dial on the latest model within Grand Seiko’s Elegance Collection is meant to evoke the beauty of freshly fallen winter snow outside its watchmaking studios in the wooded Shinshu region of central Japan. That particular scene is known as Shizuri-yuki, which refers to the moment when snow spills down from the branches of trees to create a shimmering cascade of light.

You might recall the Grand Seiko Spring Drive SBGY007 we showed you earlier this year, with its hammered ice-blue dial that beautifully mimics a nearby frozen lake, a phenomenon called Omiwatari. 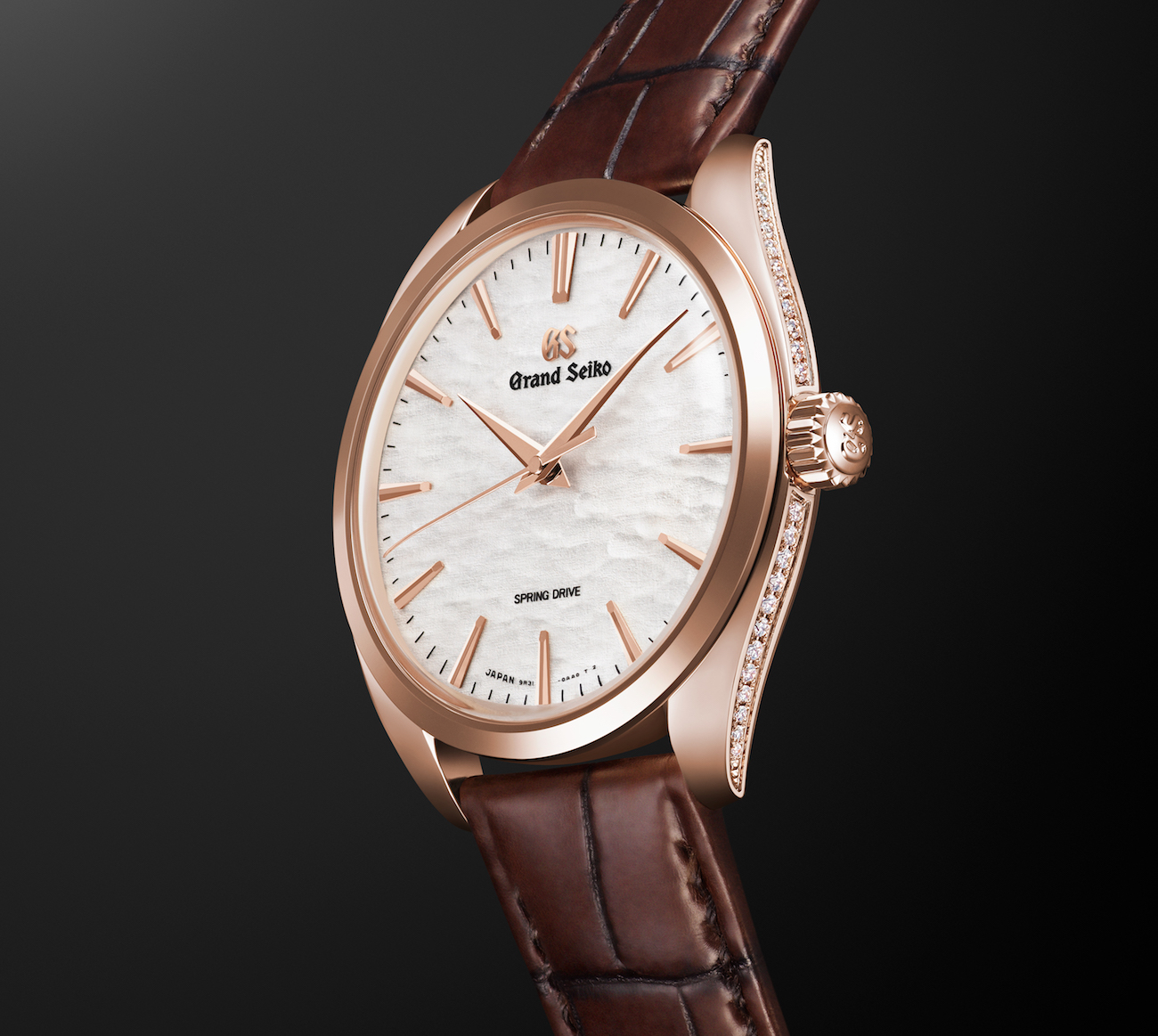 Grand Seiko cases this latest Elegance watch in a 38.5mm rose gold frame dotted along its sides with fifty-three hand set diamonds. Artisans nicely arranged the gems so that they gradually decrease in size from the center of the case to the end of the lugs, which appears to flow along the side of the case. This quite effectively generates the namesake Shizuri-yuki sparkle. 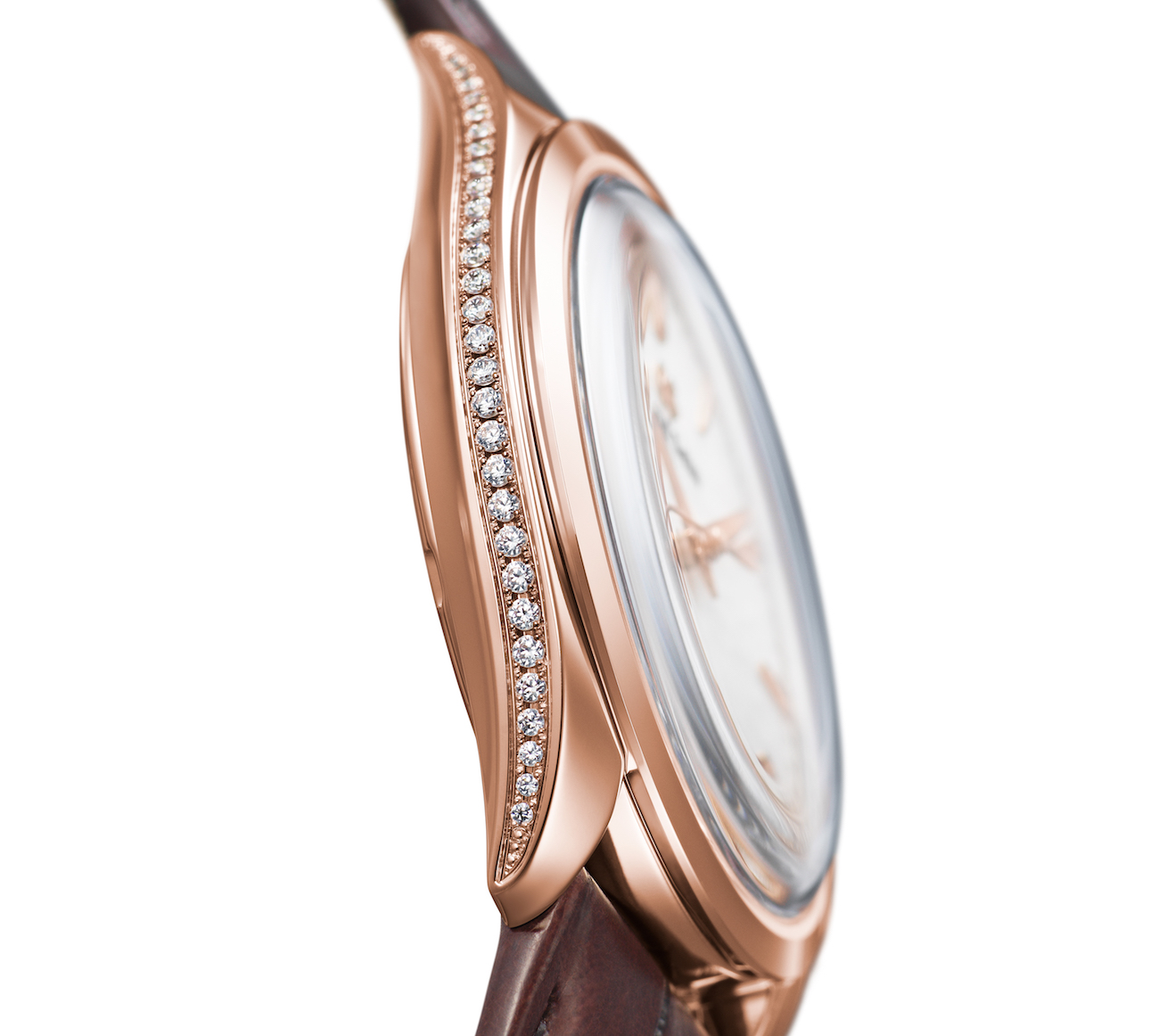 Grand Seiko then continues to evoke the winter scene on the dial with a wind-blown snow pattern. The scene is broken only by the very smooth Spring Drive seconds hand, and much more slowly as hour and minutes pass as indicated by matching, perfectly faceted gold hands.

This is a fairly thin watch, measuring 10.2mm in depth, thank to Grand Seiko’s own Spring Drive manual-wind caliber winding Caliber 9R31, which offers an impressive 72 hours. As a Spring Drive caliber, it also provides incredible precision with accuracy rated to ±1 second per day. 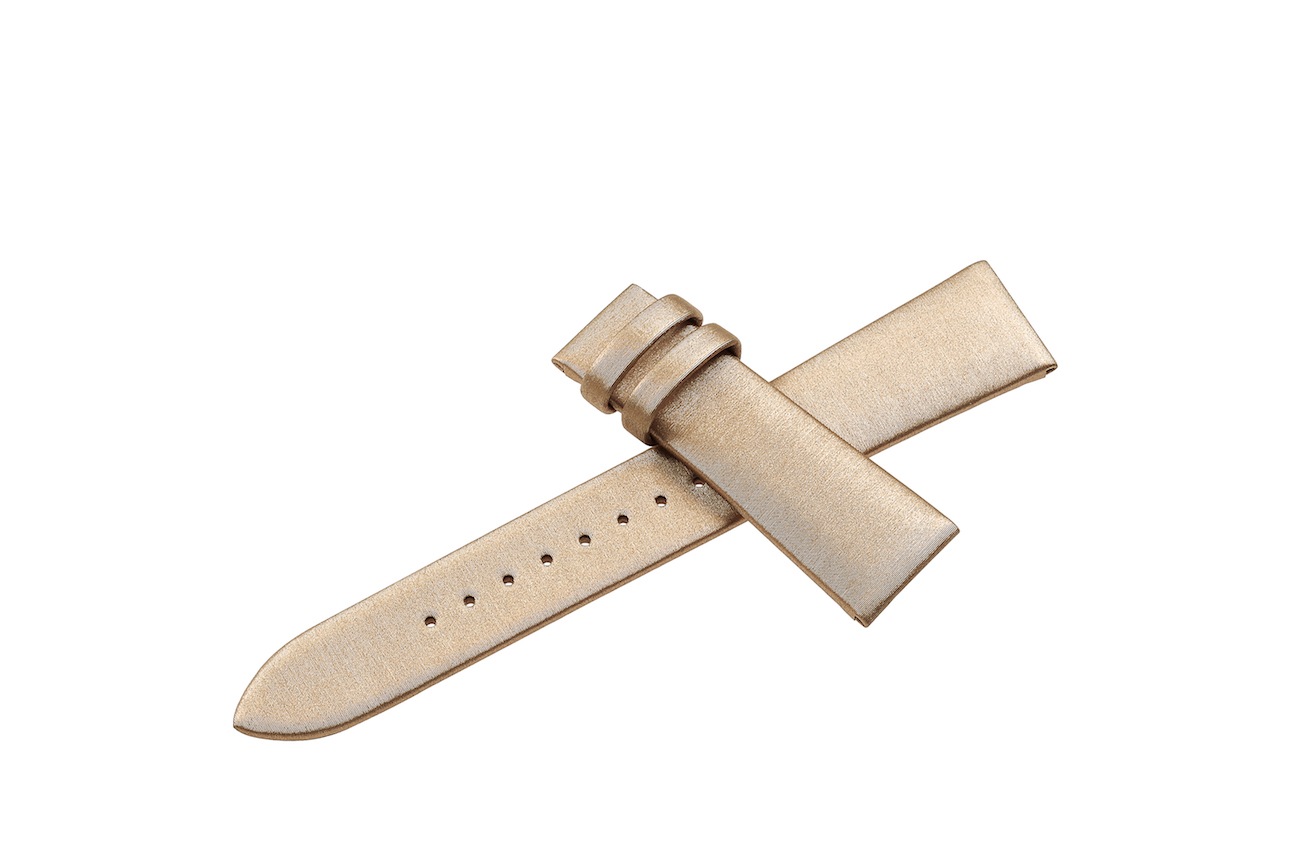 The Grand Seiko Spring Drive SBGY008 is sold on a brown leather strap and comes with an additional satin gold-colored leather strap (above). The watch will be available as a limited edition of sixty at Grand Seiko Boutiques and selected Grand Seiko retailers worldwide in January 2022, just as winter peaks in the northern hemisphere. Price: $38,000.

Grand Seiko’s latest additions to its Elegance Collection include these two unisex 34mm models (SBGX347 and SBGX349). Each watch sports this brand’s characteristic and highly light-reflective diamond-cut markers and hands. Grand Seiko sets a white or a royal blue dial within the slim (10.7mm) steel case with a thin bezel and boxed, retro-inspired sapphire crystal. 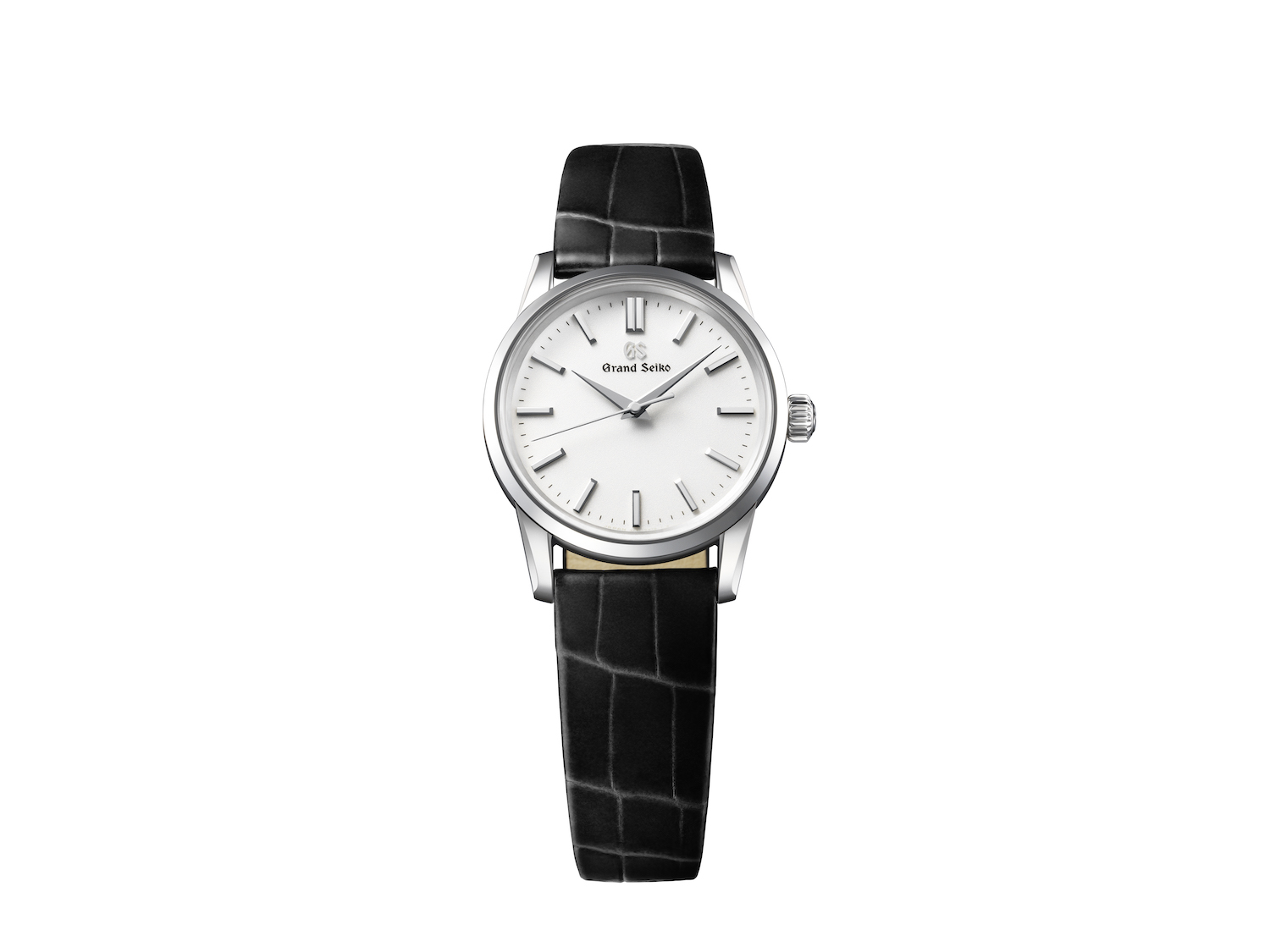 The watch’s straight-forward design belies a great deal of technical detail, including the use of Caliber 9F61, Grand Seiko’s famed high-end (and hand-assembled) quartz caliber with an ultra-precise accuracy of +/-10 seconds a year.

And Grand Seiko protects this movement against potentially destabilizing magnetic influences to an especially strong level of 4,800 A/m, not typical protection among watches in this price range. 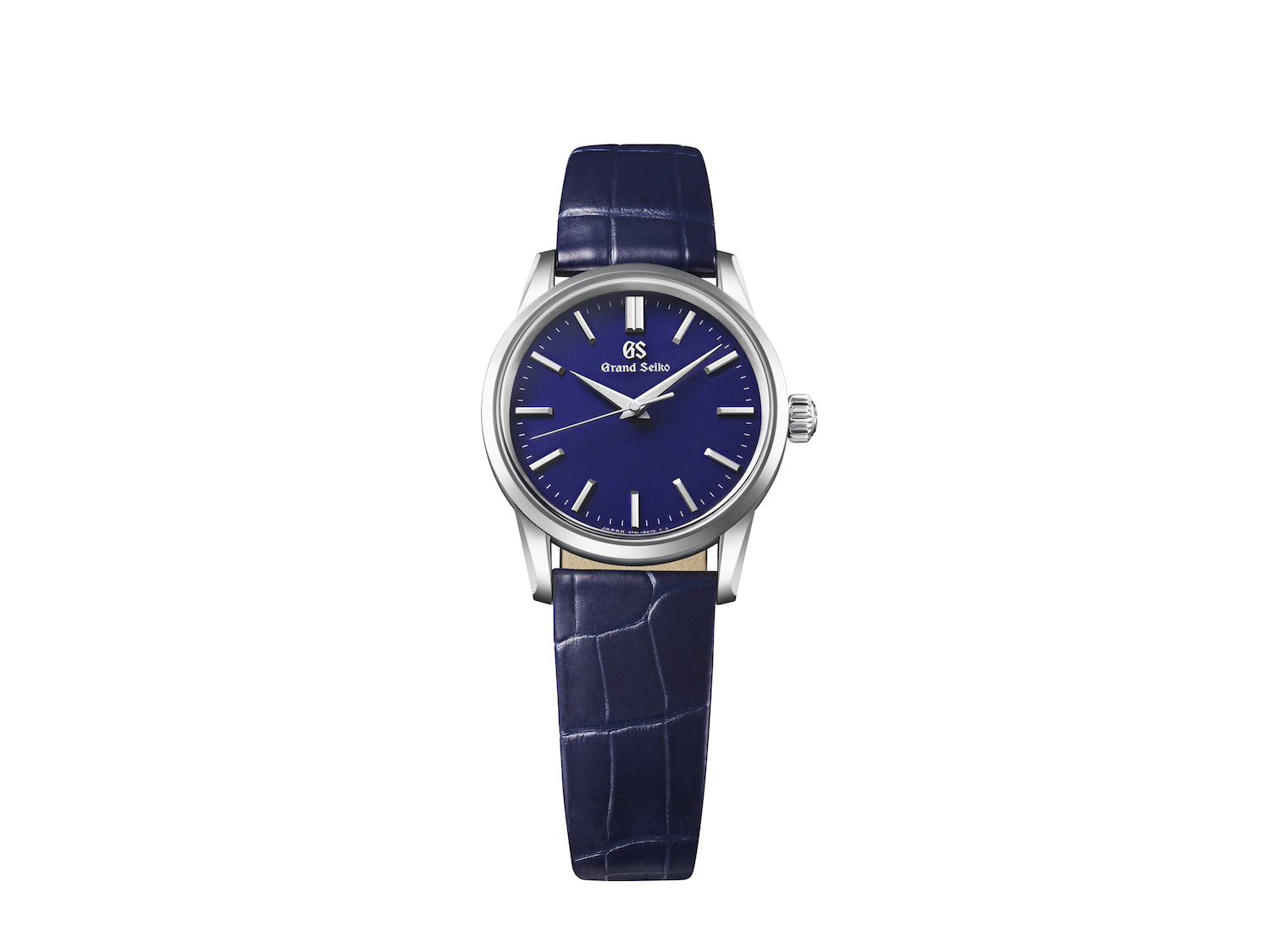 Both Grand Seiko Elegance debuts are priced at $3,300. 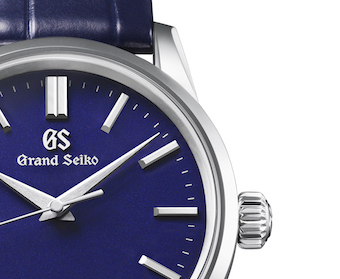 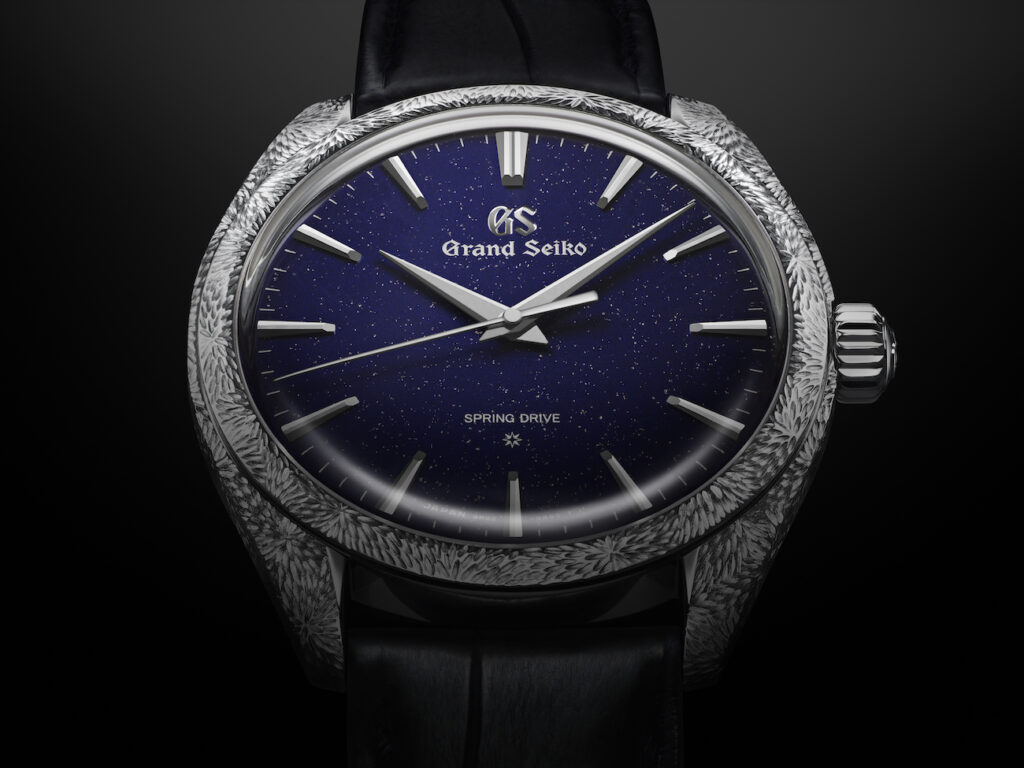 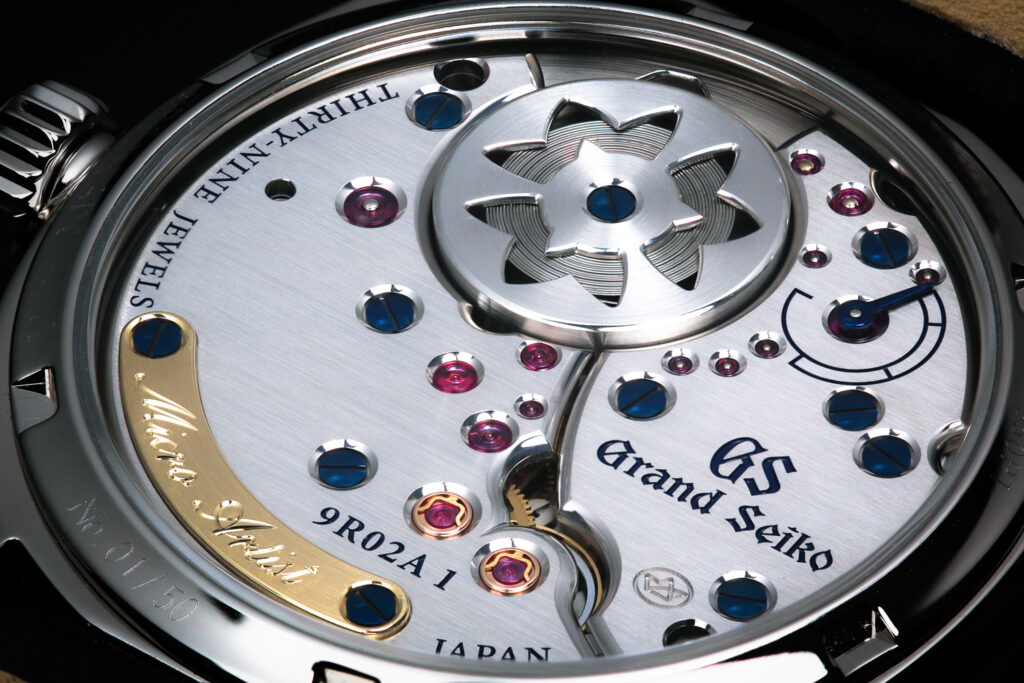 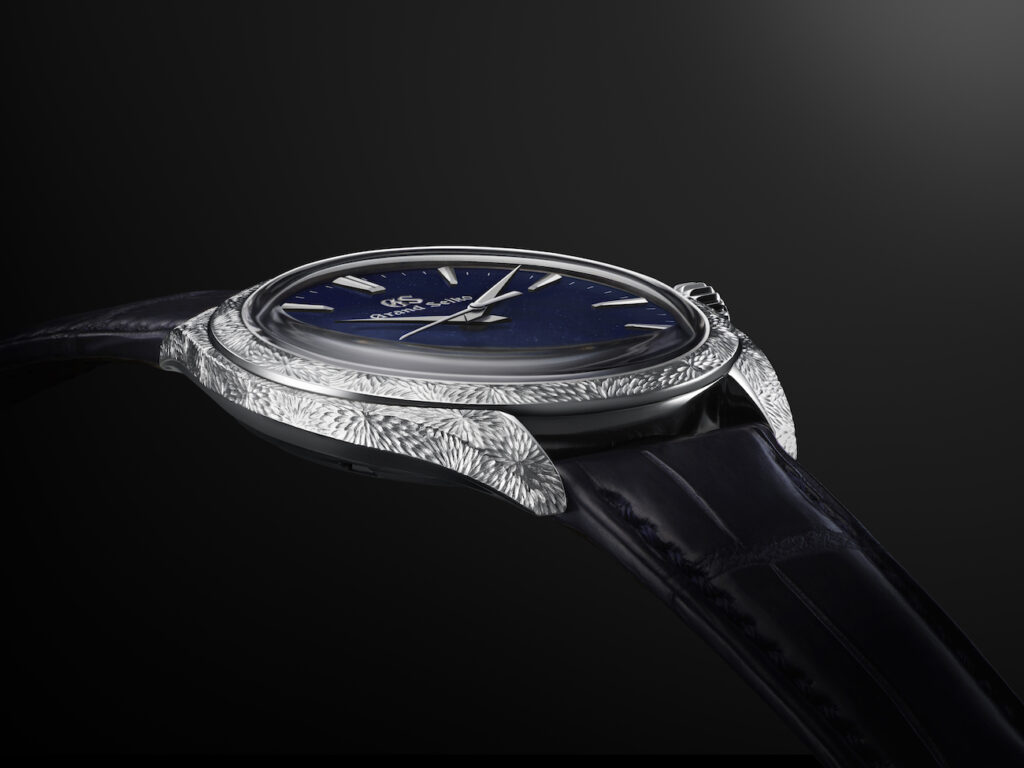 The dial on the latest elegant Grand Seiko Spring Drive watch beautifully mimics the undulations of lake Suwa when its surface is frozen, a natural phenomenon called Omiwatari.

Grand Seiko says its watchmakers and dial designers were inspired by the lake to create the ice-blue dial on the new SBGY007, a 38.5mm steel watch.

To make the dial, Grand Seiko artisans at the Shinshu Watch Studio near Lake Suwa hammered the dial’s mold to create the visible edges and the round shape, then polished the indexes and sharpened the hands. 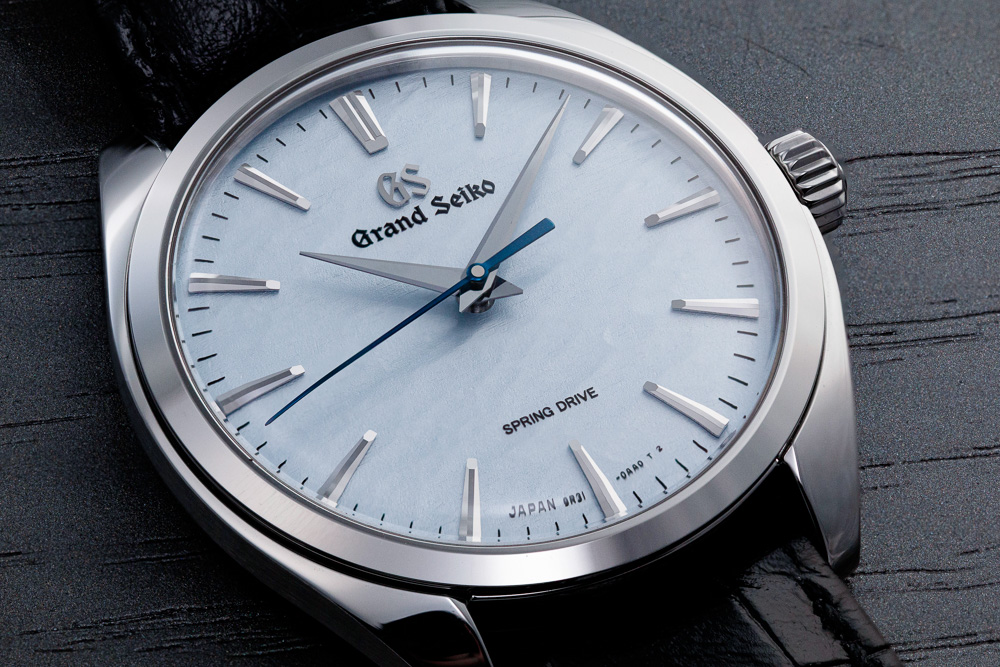 Thanks to these angles and colors, light glimmers across the hands and dial, a result said to reflect Grand Seiko’s Nature of Time design philosophy. 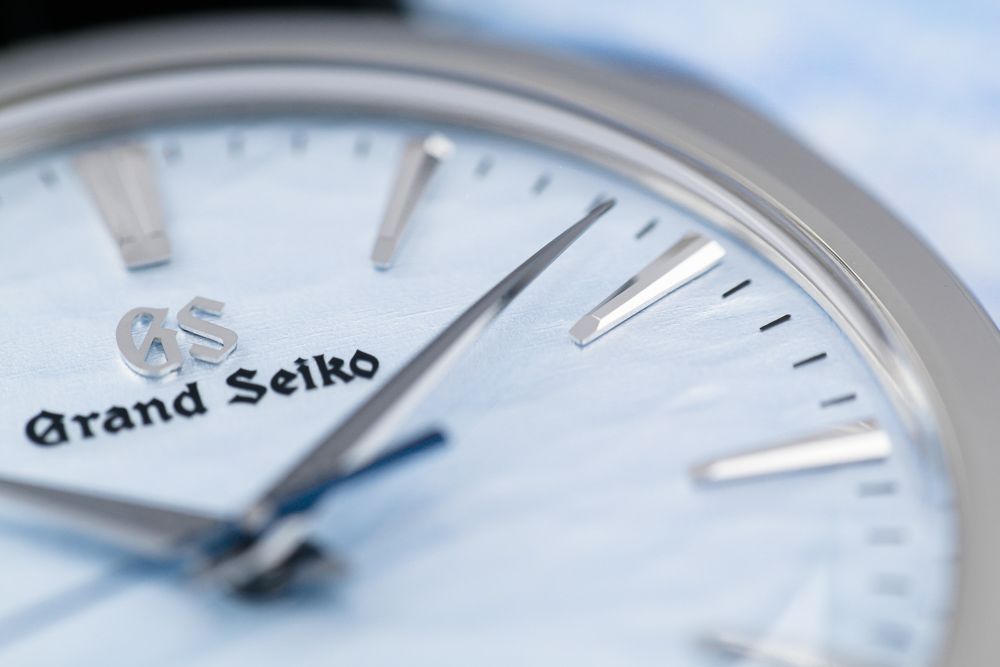 Grand Seiko powers the watch with its own hybrid, super-precise Spring Drive Caliber 9R31, with dual barrels that deliver a power reserve of 72 hours when fully wound. Turning the watch over, viewers can eye the nicely finished Spring Drive movement, beautifully flecked with tempered blue screws and its power reserve indicator.

Grand Seiko expects this new SBGY007 to be made available in early July at Grand Seiko Boutiques and retail partners. Price: $8,300. 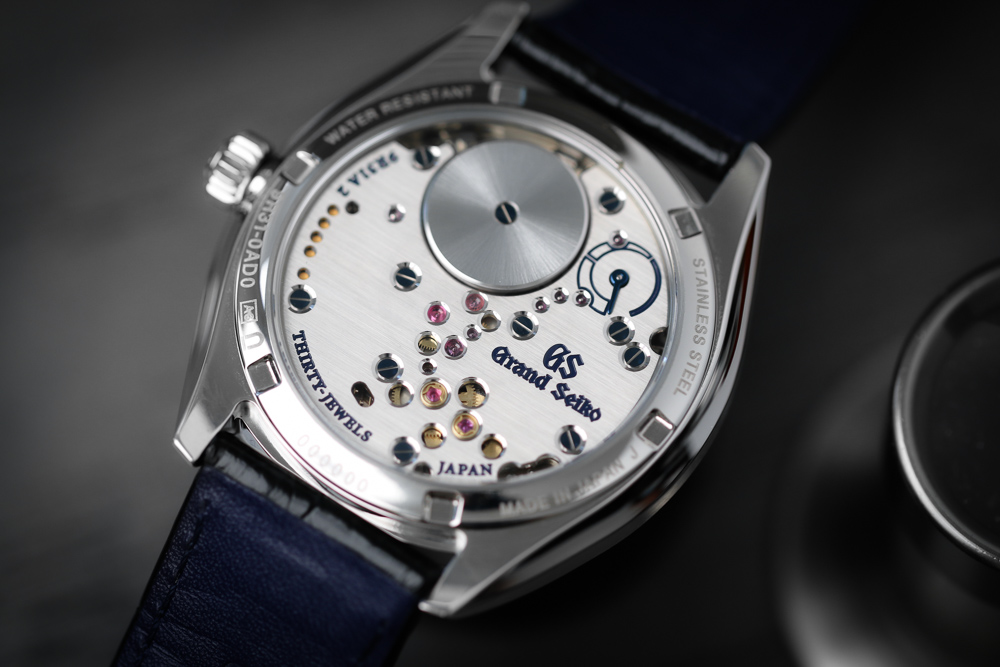