Nomos explains that the red, blue, black and off-white dial colors here are lacquer-coated using a technique similar to that used when making enamel dials. Incoming light is not absorbed by the opaque surfaces but instead reflected, creating depth, according to the watchmaker.

Recognizing the decidedly unsubtle dial hues, Nomos says the new watches “are not for everyone.” The few Existing Tetra Neomatik watches are available in more subdued silver, blue or white dials. 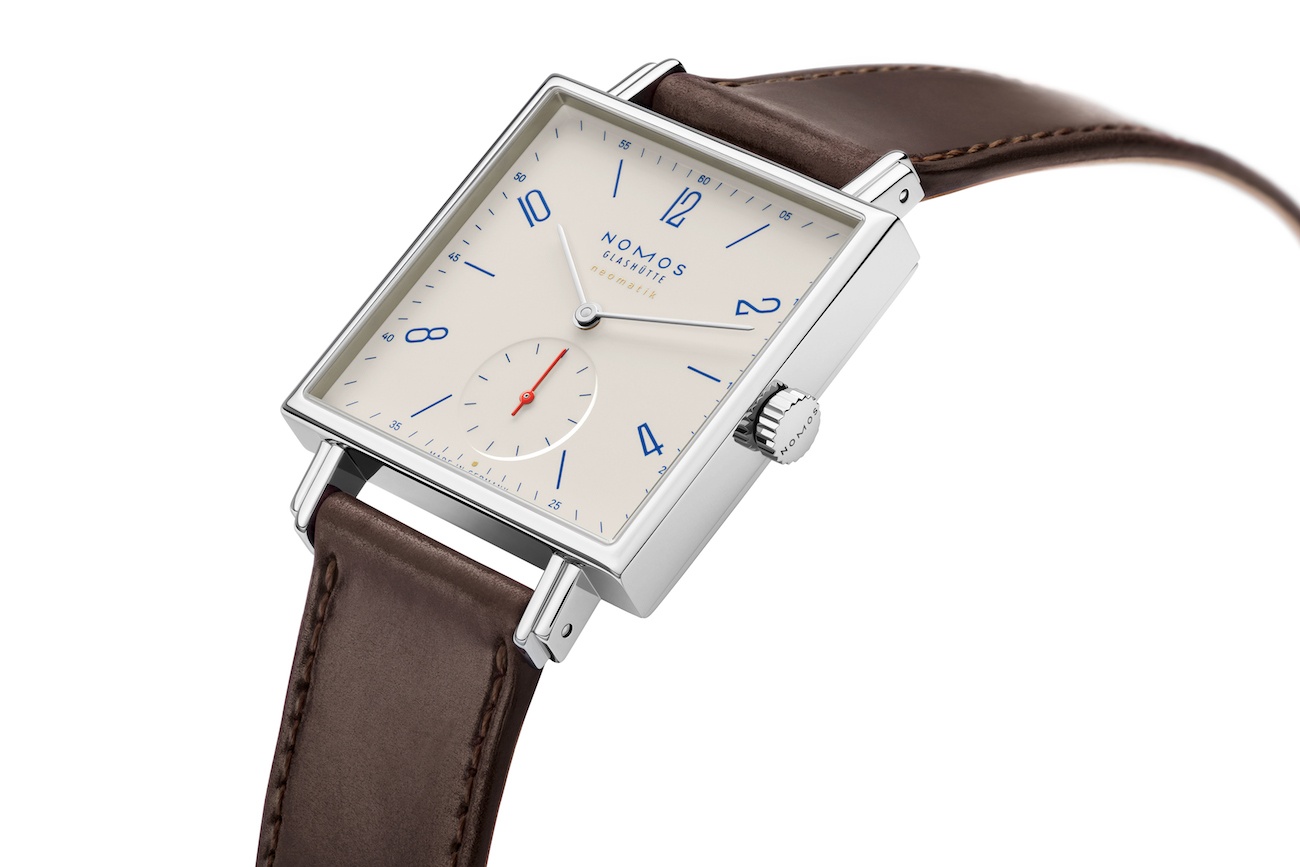 The Tetra is a signature Nomos collection primarily offered only with a manual-wind caliber. 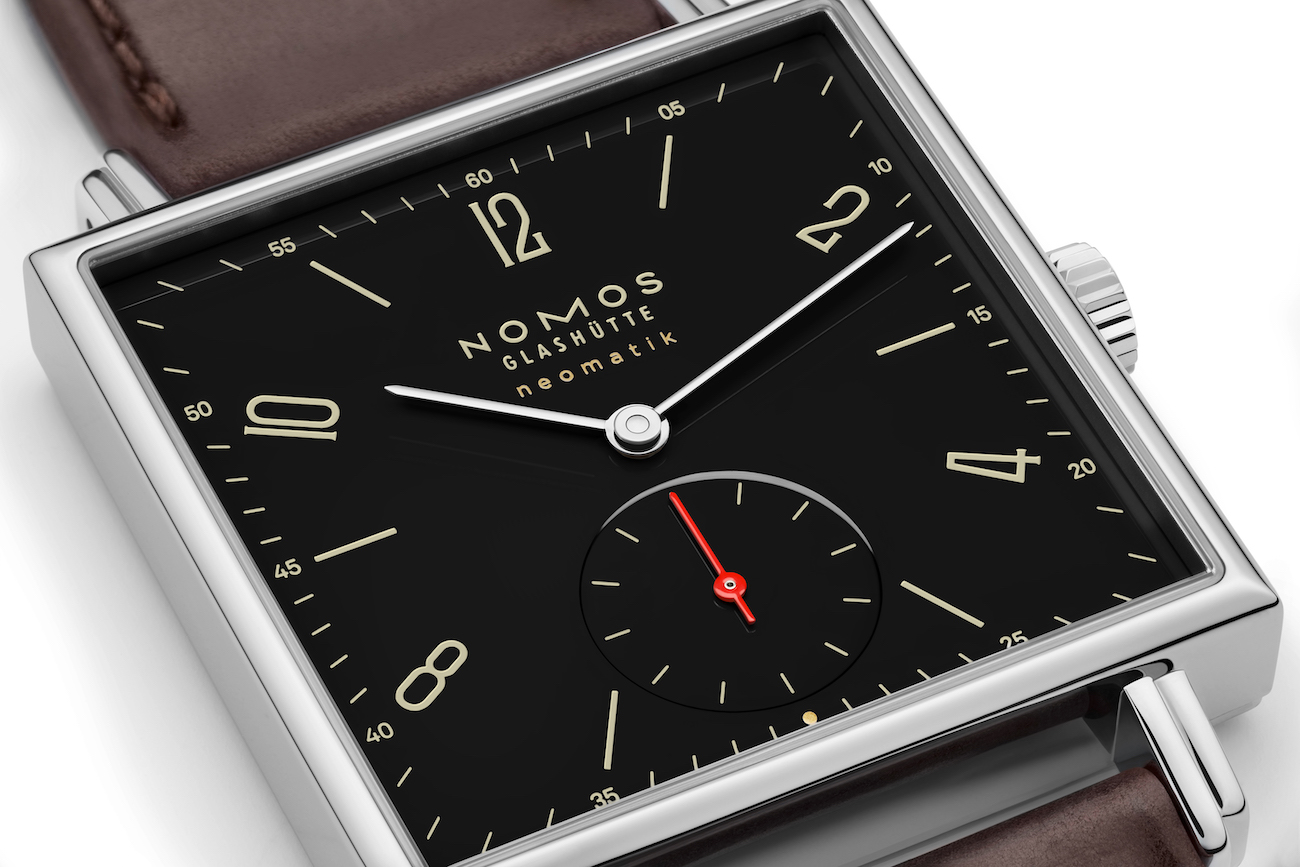 “The watches are bolder than sneakers with a jacket,” according to Nomos product manager Heike Ahrendt.

The chronometer-adjusted Nomos DUW 3001 automatic caliber is visible through a sapphire caseback on each watch, framed by an engraving noting the limited nature of the Tetra Neomatik – 175 Years Watchmaking Glashütte collection. The new series is limited to 175 units of each color. 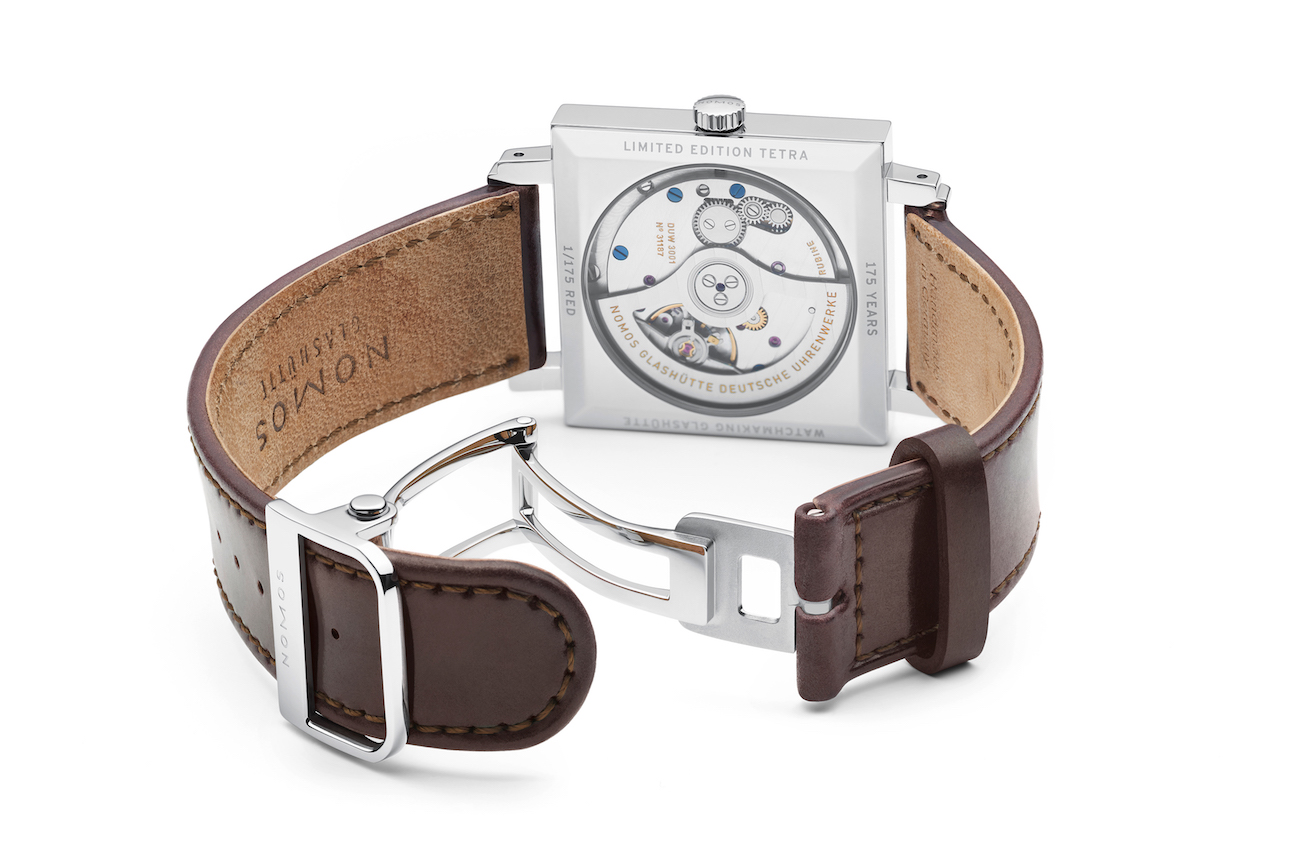 Nomos attaches each case to a remborde strap made of Horween Genuine Shell Cordovan, oiled by hand and struck with glass balls to create a shiny finish. Price: $3,860.

Just in time for the holiday season, Nomos adds new touches of silver and gold to its Orion collection.

Look for the new members of this minimalist Glashütte classic, namely the new Orion 33 Gold and the Orion 38 Silver, to inject a less-than minimal hint of luxury (or seasonal cheer) to the less-is-more collection.

While both Orion models will still be made with a hand-polished dial and applied indexes, the smaller model is now available with a steel case (instead of silver) and a gold-plated dial. The larger model, also cased in steel, will gleam with a silver-plated domed dial and gold-plated indexes and hands. 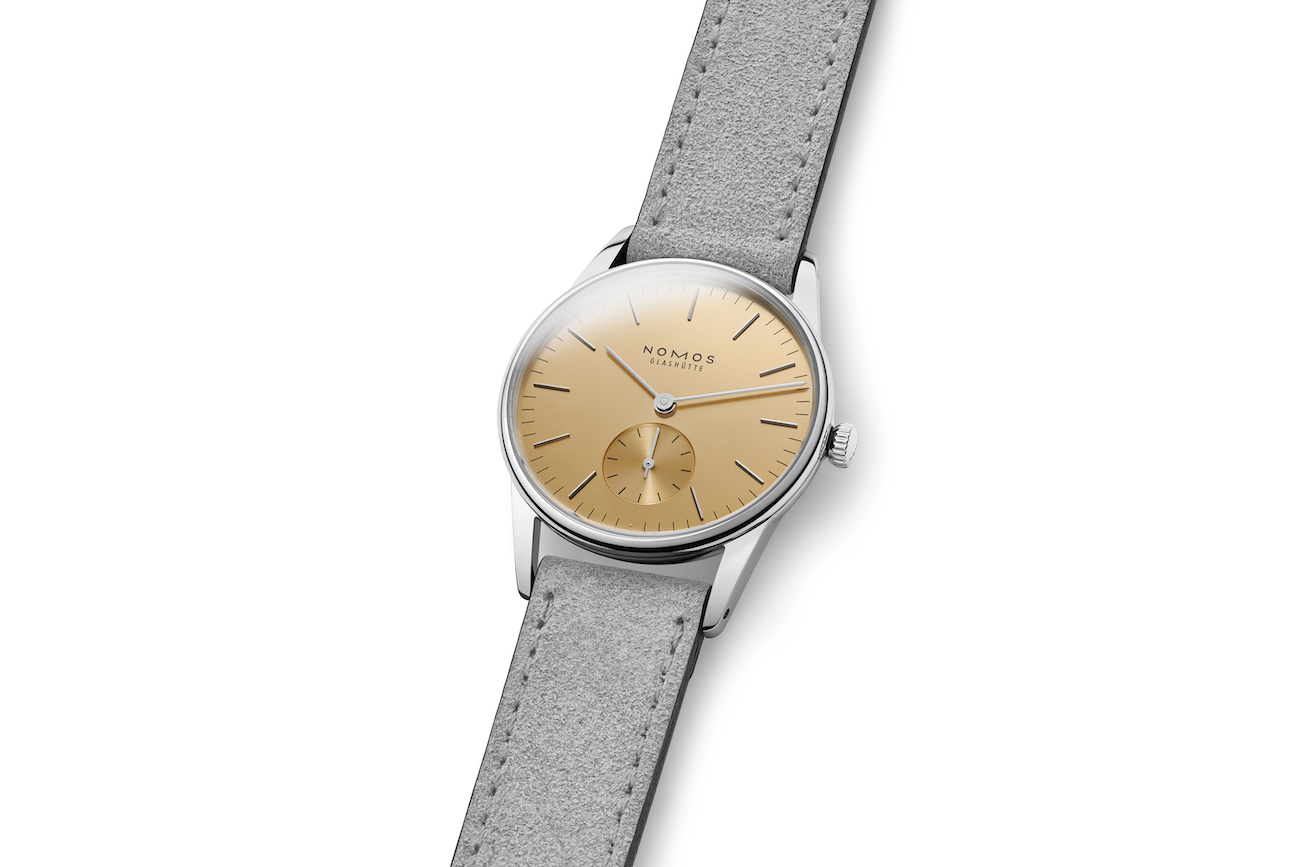 Both new Orion debuts are powered by the excellent Nomos Alpha manual-wind caliber, which boasts a 43-hour power reserve. And either watch can ordered with a custom engraving. Price: SEE WEBSITE 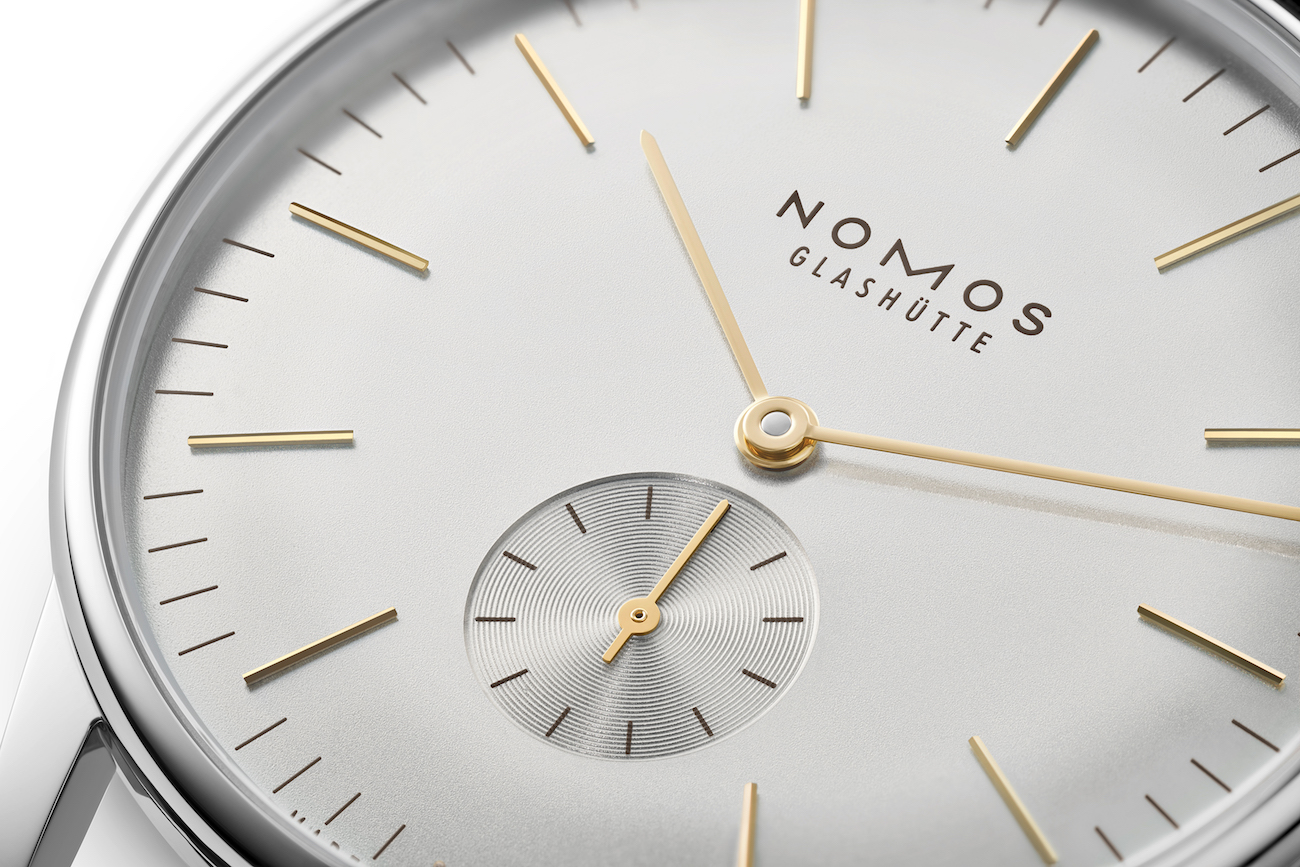 With its long markers and hands framed within a slim bezel, the Meister Fein Automatic differs from the more directly retro Meister Automatic, which features 1950s-style dauphine-shaped hands and somewhat shorter markers.

The newer Meister Fein Automatic model is also somewhat larger at 39.5mm in diameter when compared to the 38mm of the Meister Automatic line, but both wear snug to the wrist with their small, curved lugs, curved crystal and slim cases. 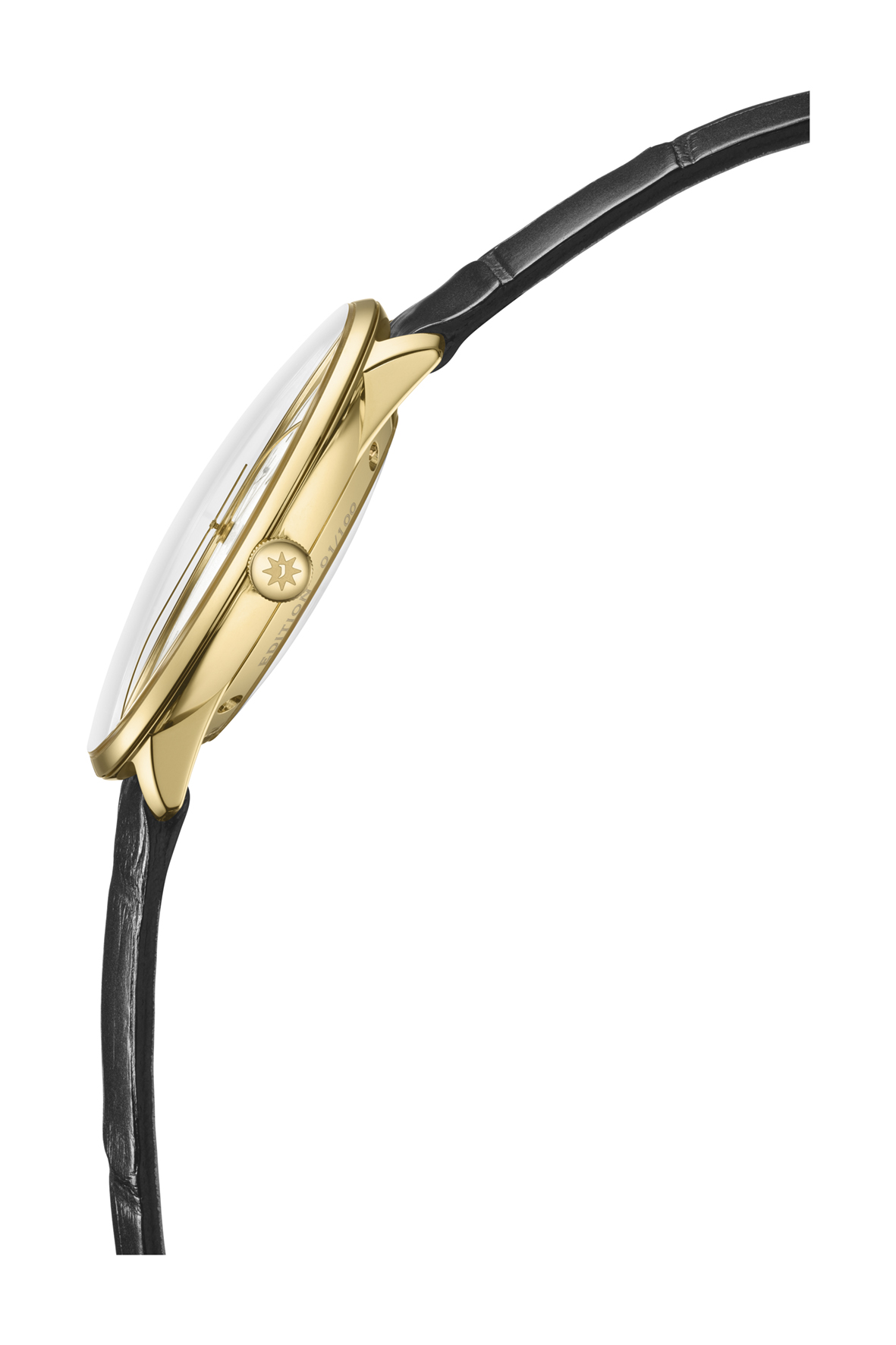 By removing the word ‘Automatic’ from the dial and affixing its traditional logo just below the twelve o’clock position, Junghans underscores its minimalist tendencies, which arise from early 20th century German design philosophies.

Junghans attaches the watch to the wrist with an elegant, seam-free black alligator leather strap. The strap, like the case, is gently curved.

And finally, Junghans rebuilds a base ETA movement to create its J800.1 caliber, which features a spherical, two-arm rotor with a gilded Junghans star. These additions are clearly visible through the sapphire crystal caseback.

Junghans will make 100 pieces of this limited edition.

Movement: Self-winding ETA-based J800.1 with two-arm rotor designed specifically for this model, and a power reserve of up to 38 hours. Rhodium-plated with blue screws, Junghans-designed rotor with sunray brush finish, gilded and polished plate as bearing cover over the rotor bearing.

Case: 39.5mm by 11.0mm gold, 4-screw back, convex and sapphire crystal with anti-reflection coating on both sides. Water resistant to 30 meters.

Collectors welcomed those sports models with open wrists. Nomos had finally combined its clean dial design spirit with a tougher and larger case design that sported a serious 300 meters of water resistance – all with a sleek steel bracelet.

This week Nomos expands its sports offerings with a new Club Sport Neomatik 42 Date Blue. As the name hints, the watch features a new, galvanized blue sunburst dial, which adds a new option to the black-dialed original.

But perhaps more critically, the debut highlights a new integrated steel bracelet that is not only more traditional in style than the first steel bracelet, it also likely enhances its acceptance to sports enthusiasts possibly wary of the original’s open lug design.

Nomos customized the bracelet for this debut, creating a classic brushed and polished three-link design with a folding safety clasp that sits right up against the case. Unlike the earlier bracelet, this one doesn’t allow any wrist to show between the case and the links. 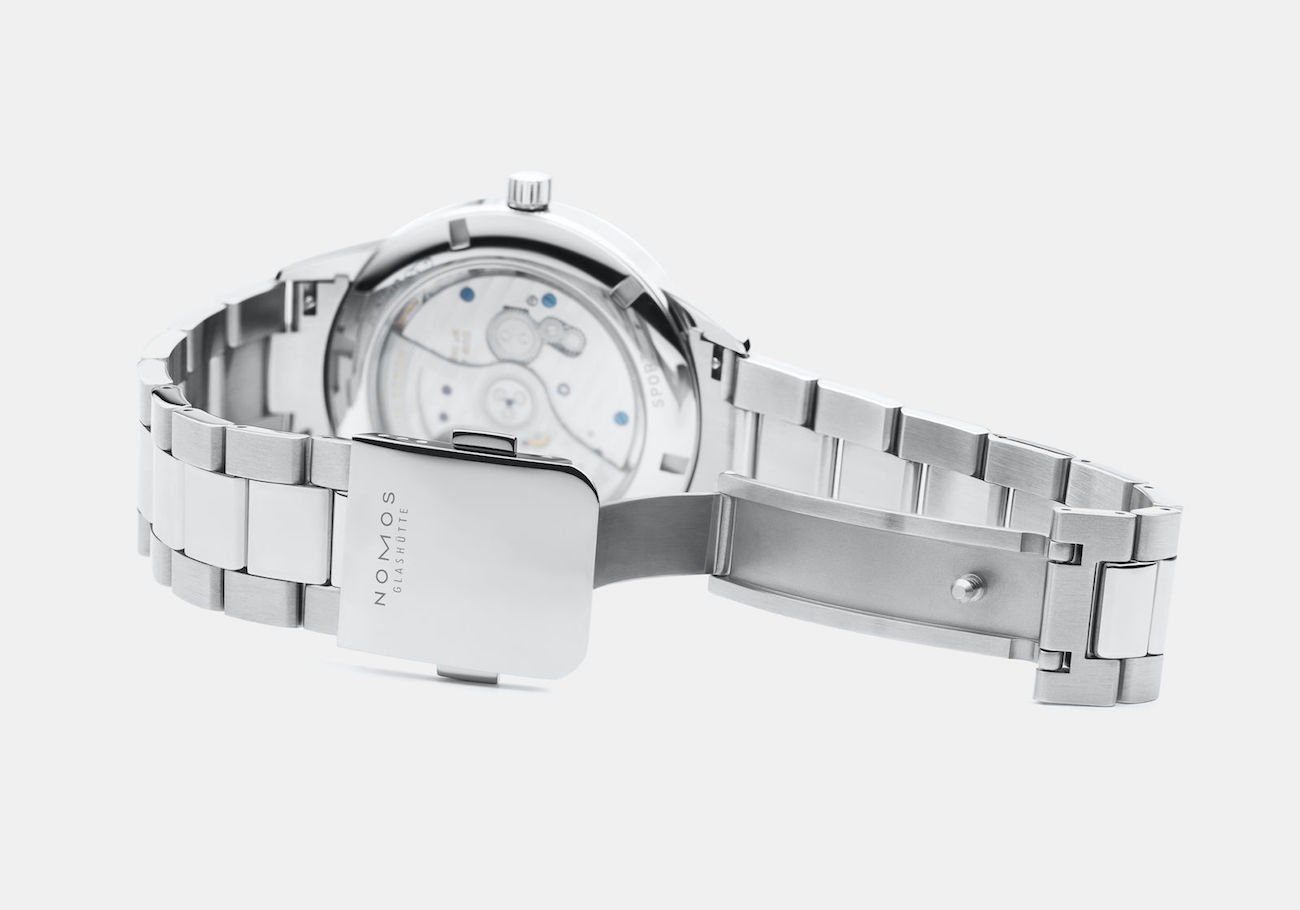 The handsome sunburst dial is set with white hands that glow blue and bold in the dark. As on the earlier models, Nomos equips the stem with a red ring that alerts the wearer if the crown is not tightened. Inside Nomos places its patented DUW 6101 date caliber from the Nomos Glashütte neomatik series. In part due to its thinness (at 3.6mm), it is well protected by the case, even with the clear sapphire caseback. 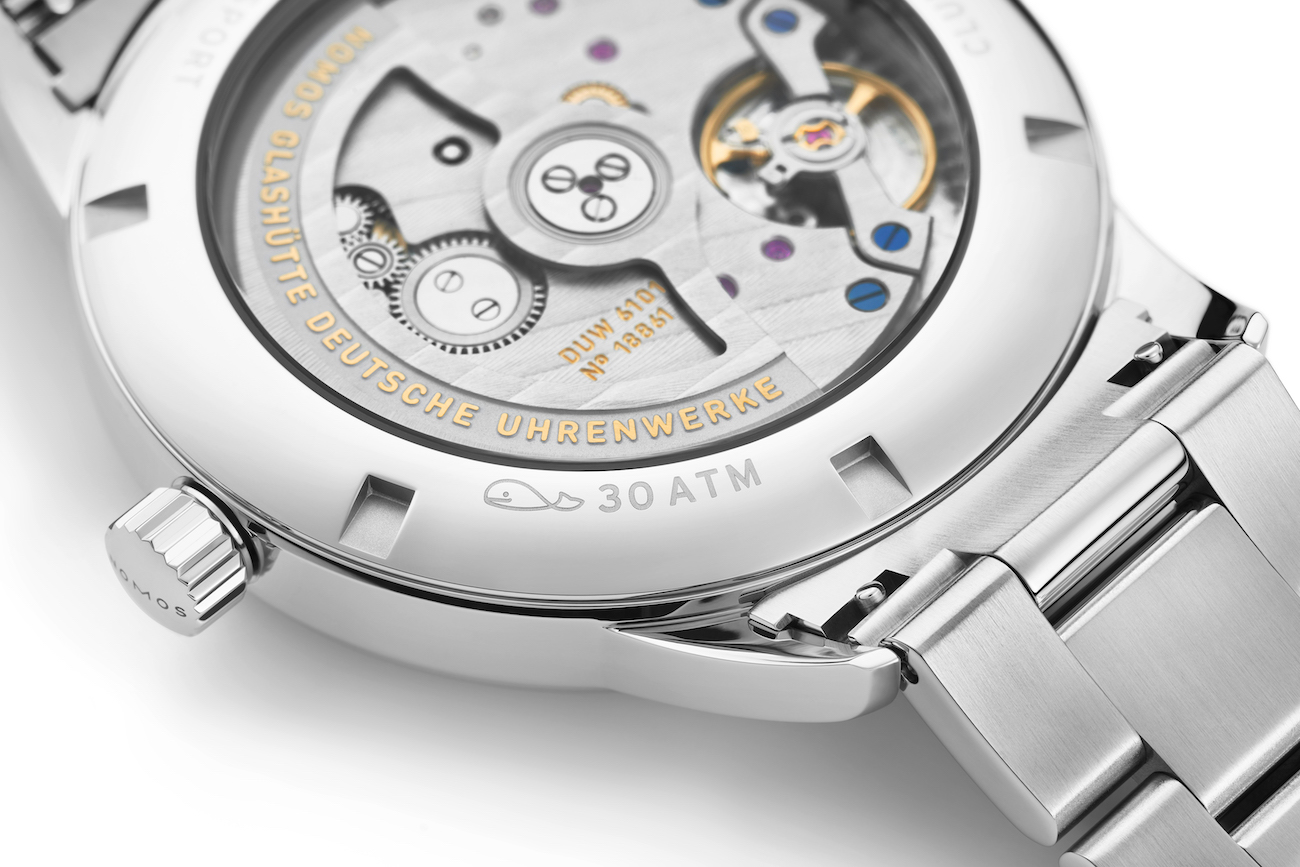 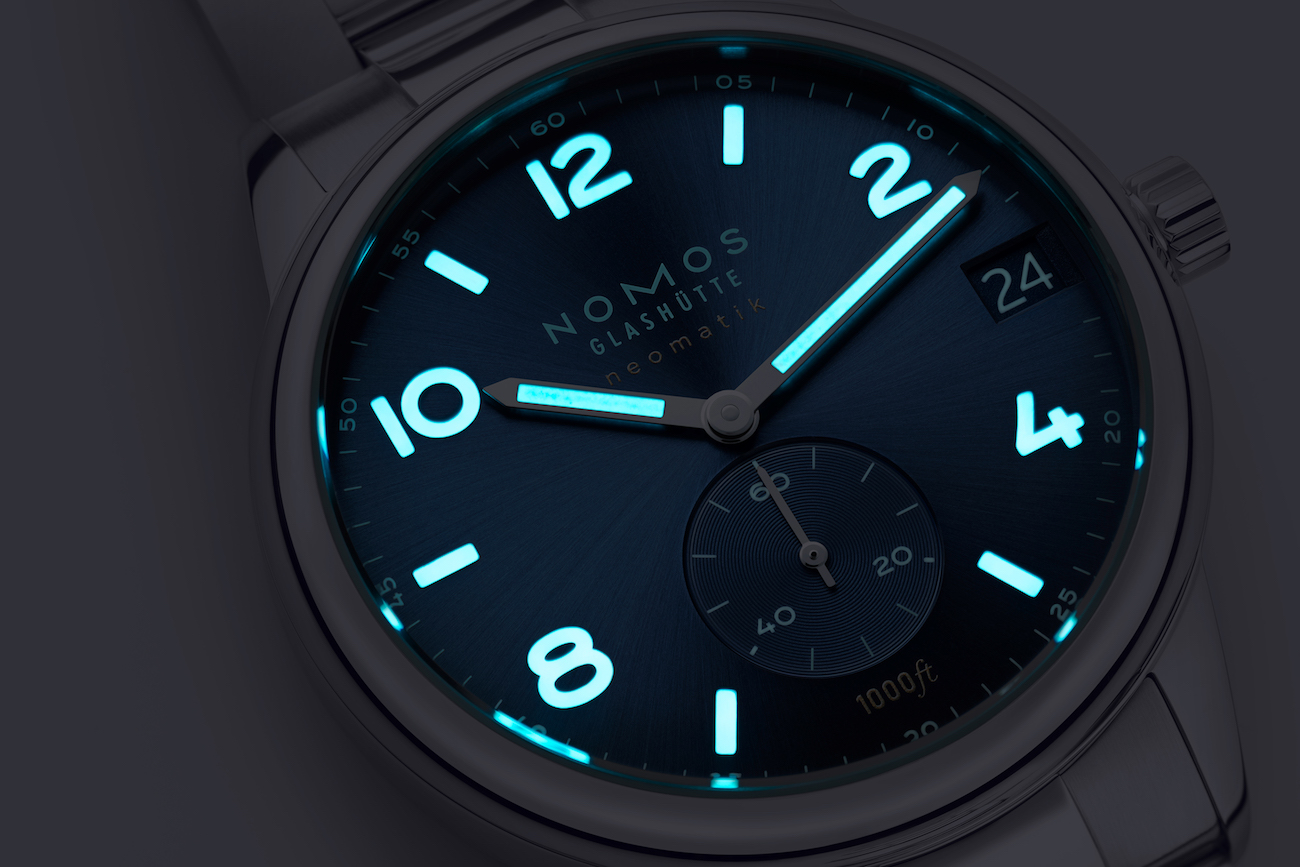 Meistersinger’s watches focus on one-hand time displays. The German-based watchmaker, founded twenty years ago, has become a favorite for those in search of an alternative wristwatch dial.

Meistersinger’s popularly priced collection offers a wide range of watches that feature one hand rotating over combined hour and minute markings around the dial – essentially echoing dials on many pre-eighteenth-century clocks.

Today Meistersinger launches a new version of that chiming model, called Edition Bell Hora, as a limited edition of 100 units to celebrate the watchmaker’s twentieth anniversary. Where the premiere Meistersinger Bell Hora watch offered blue or white dials in an unlimited series, the latest model is designed in the style of many early pocket watches.

The 43mm steel-cased Bell Hora features a ‘Sonnerie au passage’, which is the horological term for a chime heard as time proceeds. On the Bell Hora, the single chime activates at the start of each hour. This effectively, and pleasantly, alerts the wearer to the start of each new hour. 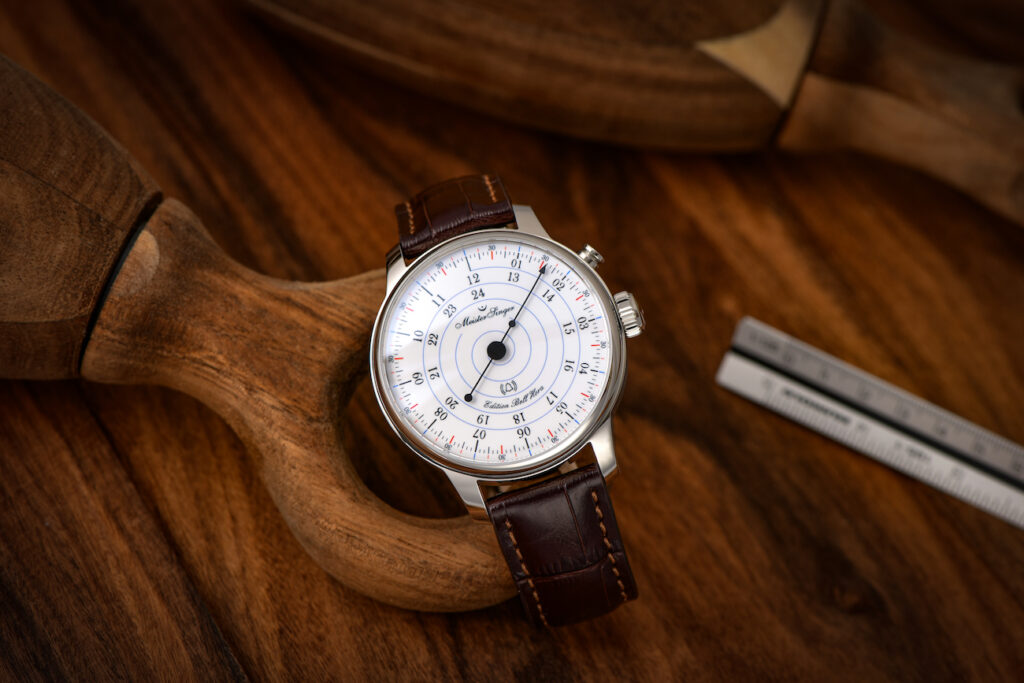 If the wearer opts to turn the automatic chime off, he or she may simply press a pusher just above the crown to turn the function off.

To create the Bell Hora, Meistersinger fits its own chime module (a cleverly revised jump-hour gear configuration with its sound fork directly under the dial) atop a Sellita SW 200 automatic movement. Even with the chime function, the watch’s power reserve remains steady when worn, and will retain power off the wrist for thirty-eight hours.

The new dial is white, like many early clocks, with more distinct minute markers than found on the more contemporary dials on the Bell Hora editions seen earlier this year. A thinner numeral font and an italicized brand name also mark the new limited edition.