Corum broadens its nautically themed Admiral collection with the watchmaker’s new three-dimensional patterned dial, previously found only on the collection’s 38mm and 45mm cases. Corum now places its Grenadier fendu dial, designed in house in La Chaux-de-Fonds in 2019, on new models within the Admiral 42 Automatic collection.

The twelve-sided (dodecagonal) Admiral, with its colorful sailing flags, was first seen in 1980. Originally a square-cased watch when it debuted in 1960, Admiral has since 1980 been offered in myriad versions, including those displaying time-only, as a chronograph and even hosting complications. 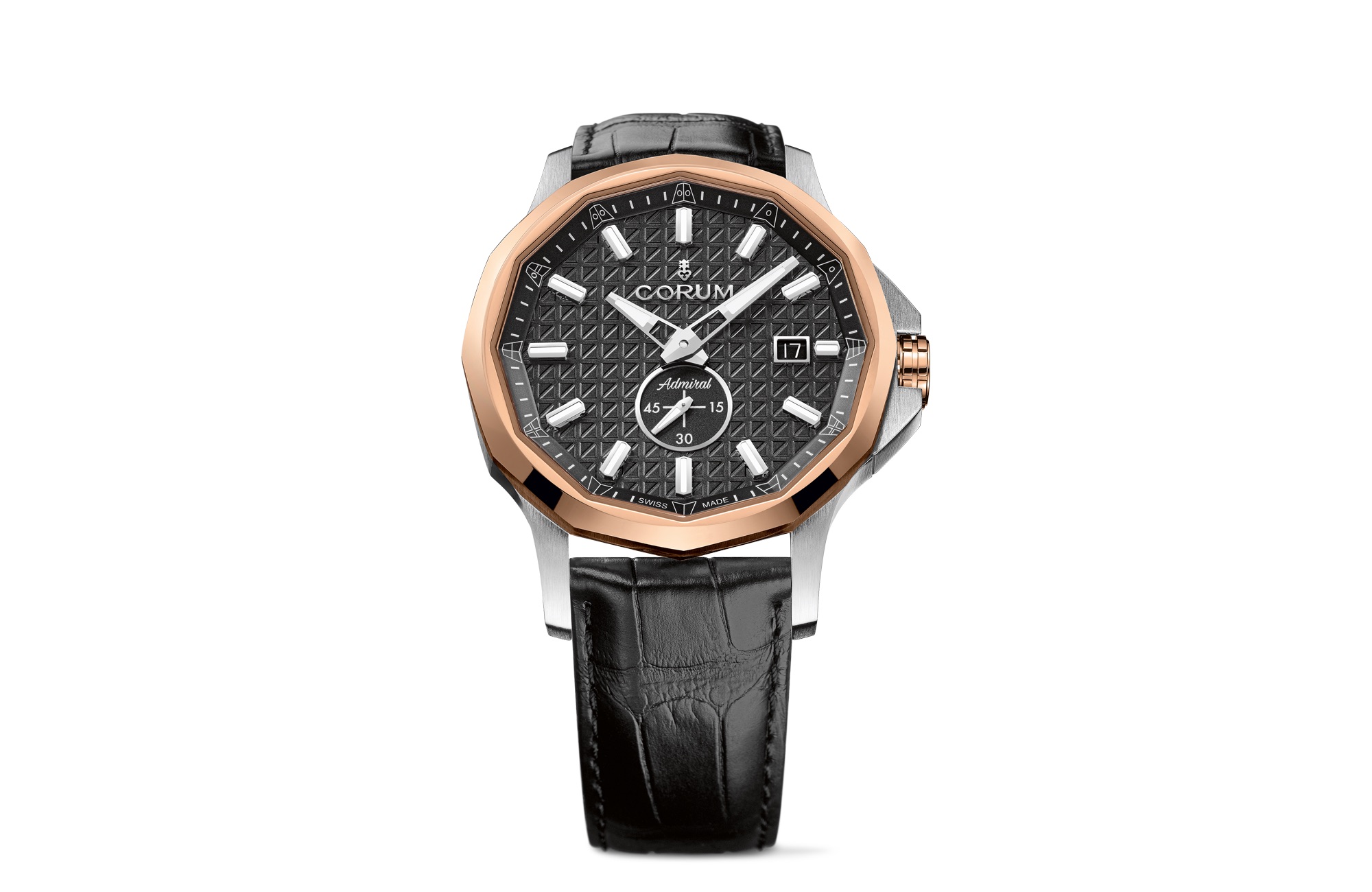 Most recently, Corum has launched numerous contemporary iterations of the Admiral with monochrome dials and sailing pennants. 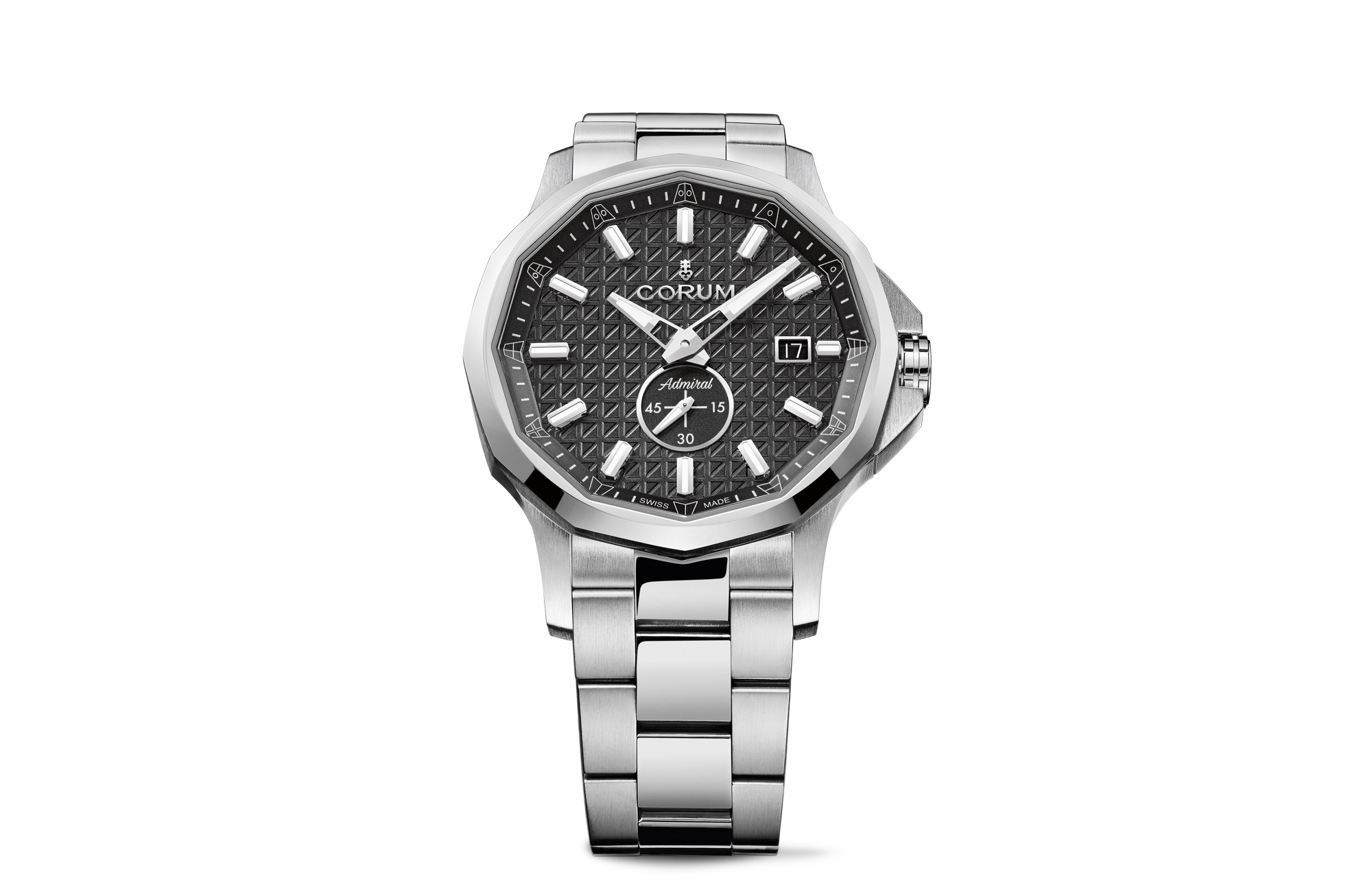 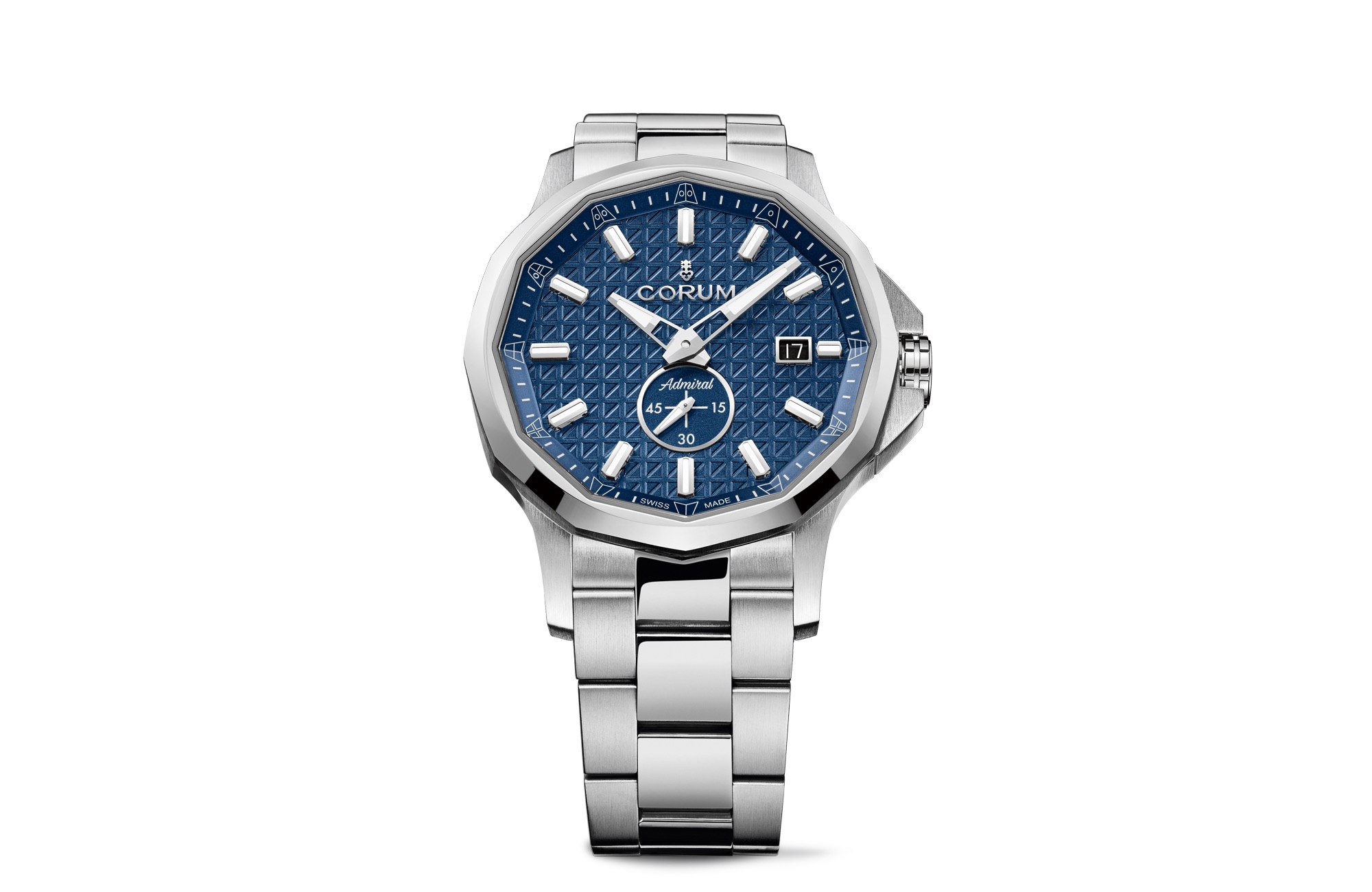 And finally, Corum powers the Admiral 42 Automatic with the CO 395 caliber, visible through a sapphire screwed-in caseback. Prices: $4,600 (steel) and $7,600 (with rose gold bezel). 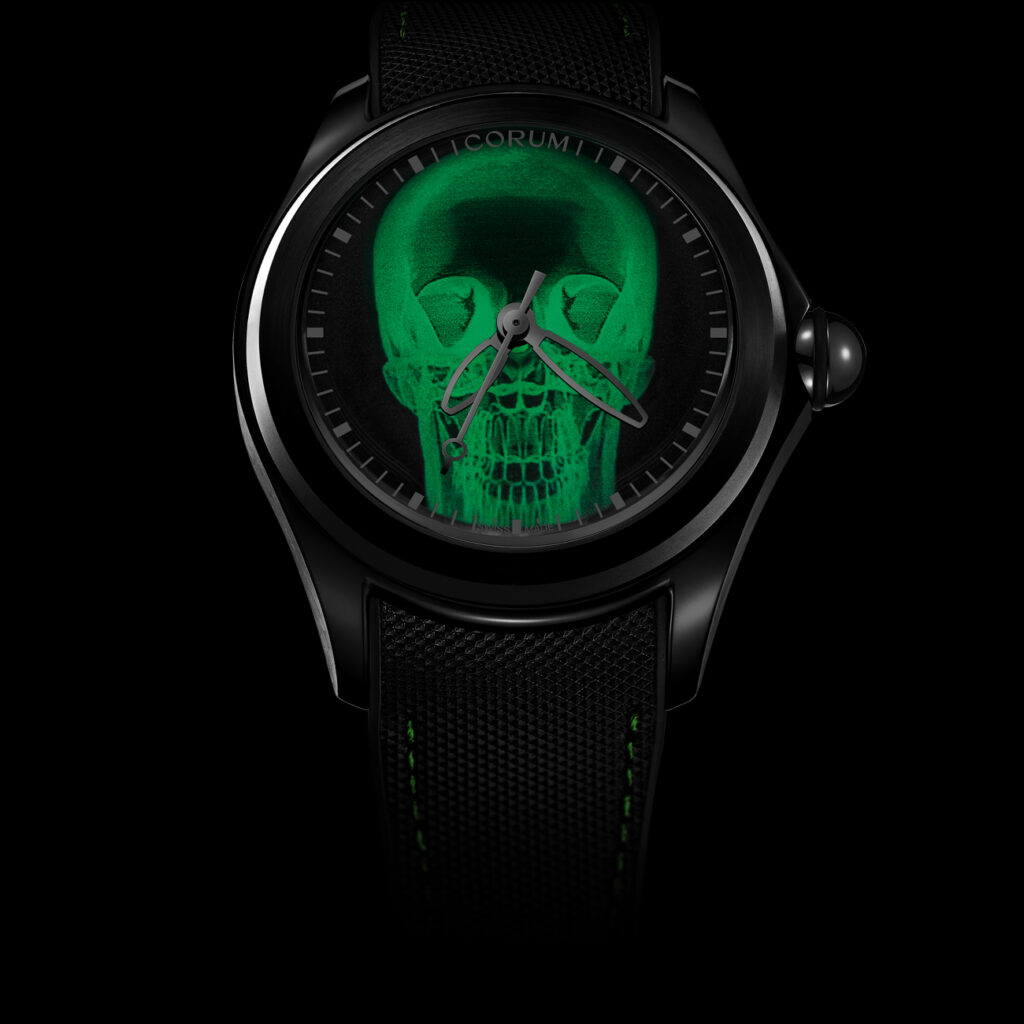 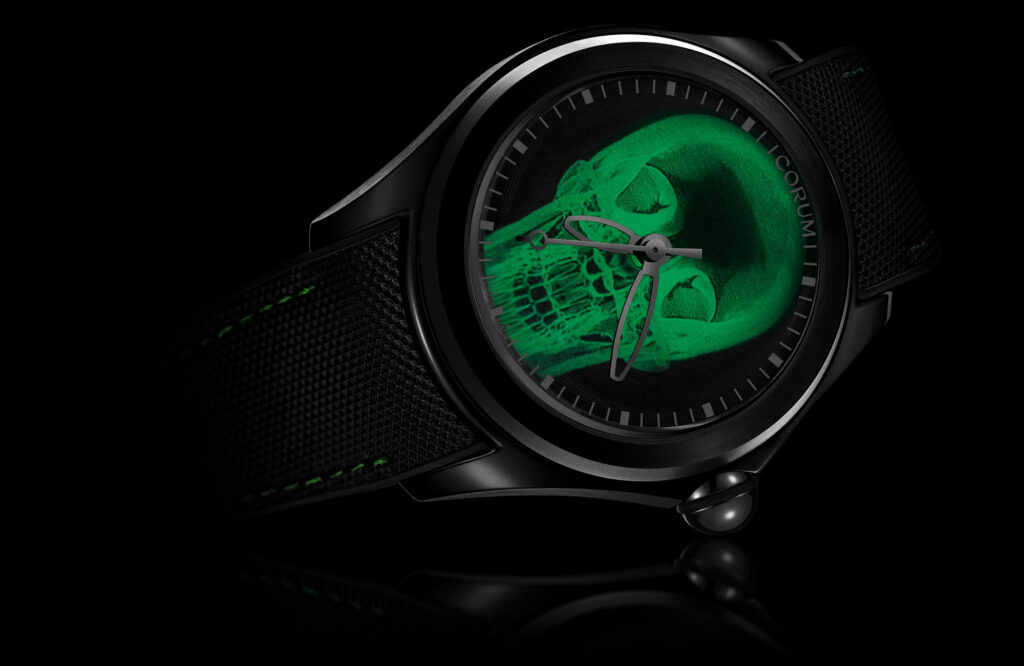 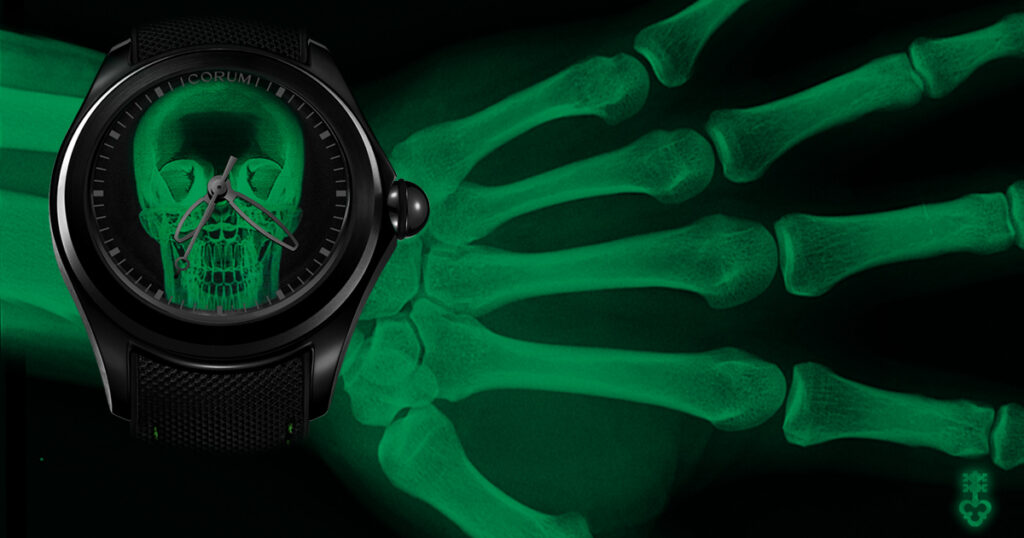 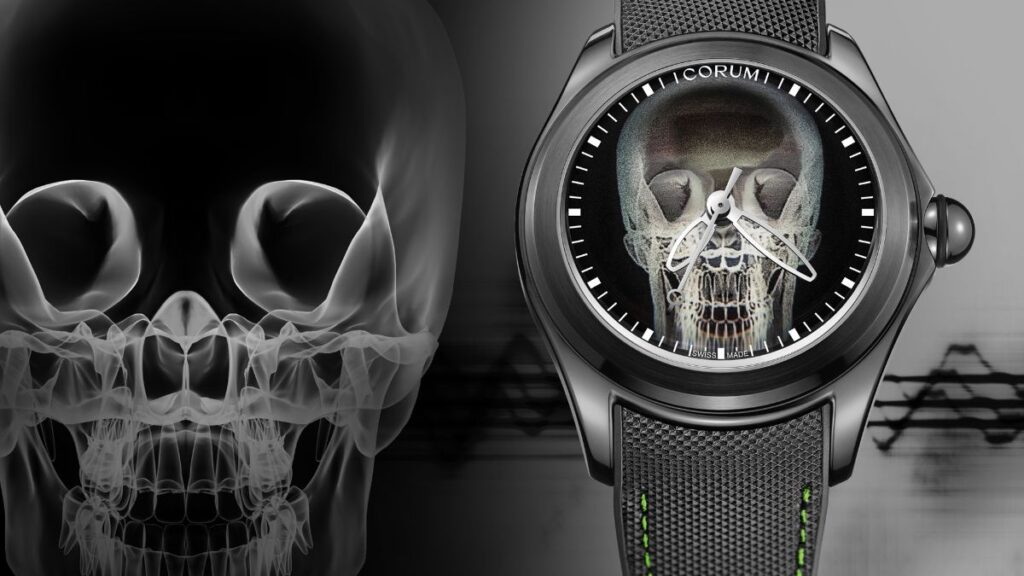 To celebrate the tenth anniversary of its line of Golden Bridge automatic watches, Corum launches the Corum 10th Anniversary Golden Bridge Automatic Collection. And with the new collection, Corum treats the wearer to a more expansive view of the watch’s unusual baguette-shaped in-line movement.

Developed as a manual-wind movement in the 1970s by Vincent Calabrese, who patented the design in 1977, Corum debuted the minimalist caliber within its collection in 1980 as the Golden Bridge, with movement parts made of gold.

The watch was a hit, and Corum created an impressive range of Golden Bridge iterations in the years after 1980. Then, in 2011 and after four years of research, Corum developed an automatic version, wisely showcasing the watch’s floating linear movement by creating an oscillating weight on rails to power the new automatic Golden Bridge. 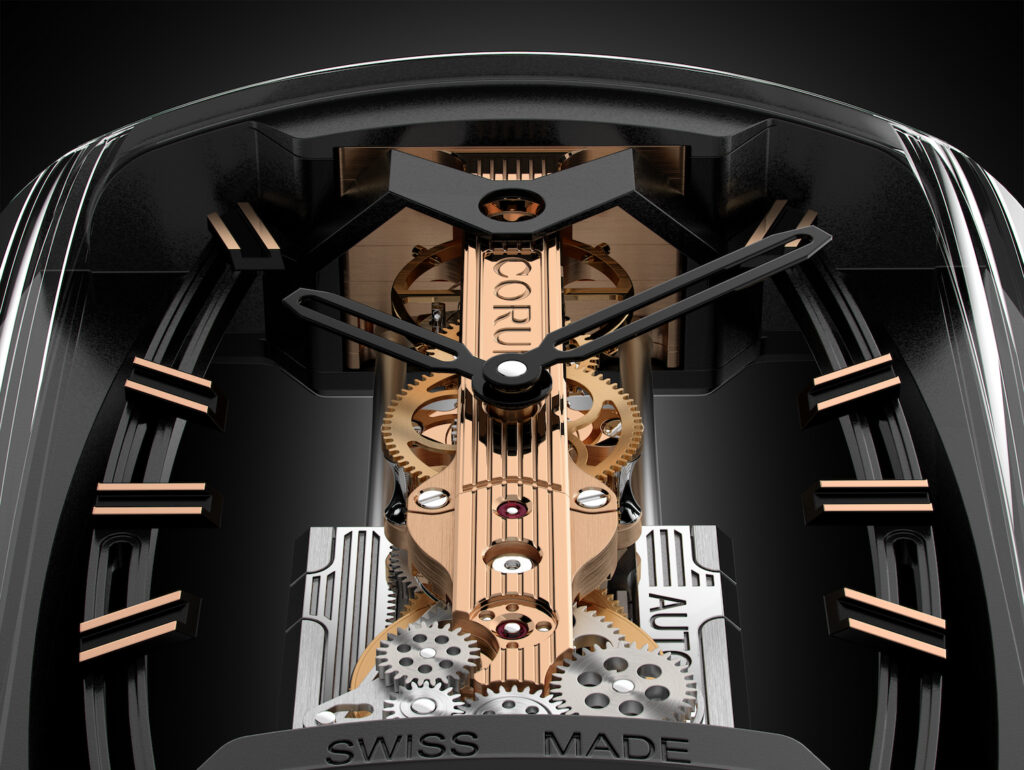 Now, ten years after that debut, Corum celebrates with four new tonneau-shaped Golden Bridge models that frame the movement, which again features main plates and bridges made from 18-karat gold.

This precious-metal caliber is now both protected by and clearly visible through a large panoramic sapphire crystal and caseback.  Corum cut the new crystal from a single piece of sapphire, extending it from the top crystal to the sides of the watch to allow for a 360-degree view of the movement.

Corum sets the sapphire in either a titanium or gold case measuring 37.2mm by 51.8mm, larger than we’ve seen for previous Golden Bridge automatic models. The new case size effectively creates a larger stage for the star of the watch, the movement, which is set vertically from the 12 o’clock position to the 6 o’clock position, where you’ll find the crown.

For the dial, Corum created another unusual visual treat: a ‘floating harness’ system to display its hand-applied indexes. Corum notes that “because there is no dial to affix the indexes to, the harness system links to the movement base so that the markers seem to be floating in space.” 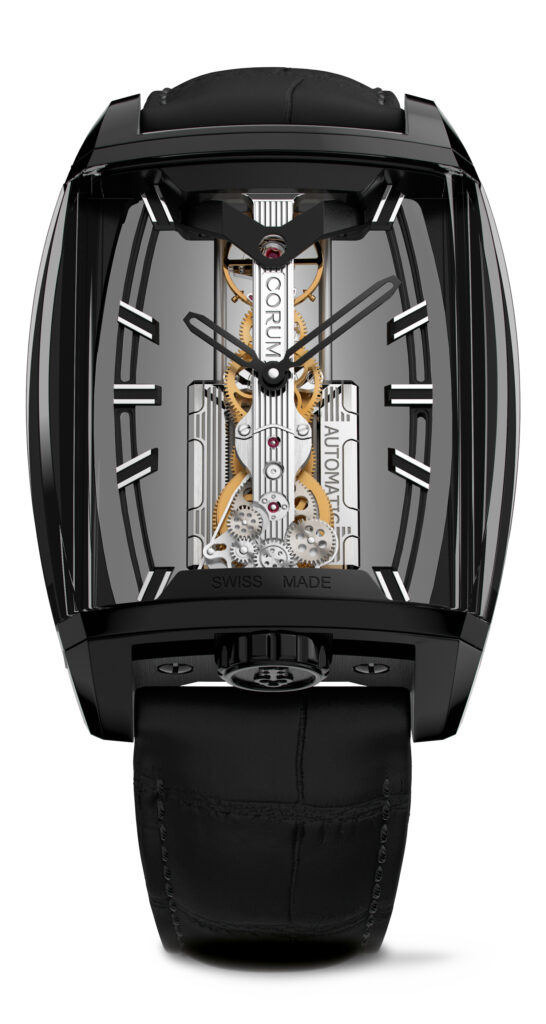 For yet another unusual view, turn the watch over. From the back Corum shows off its Caliber C0313 through a smoke-hued sapphire crystal.  The movement boasts forty hours of power reserve, a variable inertia balance wheel, a miniaturized barrel and main plate and even more precious metal: the linear oscillating weight is made from platinum.

Corum is making its 10th Anniversary Golden Bridge Automatic Collection with four distinct editions: a blackened titanium and 18-karat gold model in a limited edition of 150 pieces, and a full blackened titanium version in an edition of fifty pieces. Two more models echo these cases, but are set with diamonds and are offered in more limited numbers. Corum will make 100 pieces of the diamond-set titanium-and-gold version and only twenty-five of the diamond-set titanium watch. 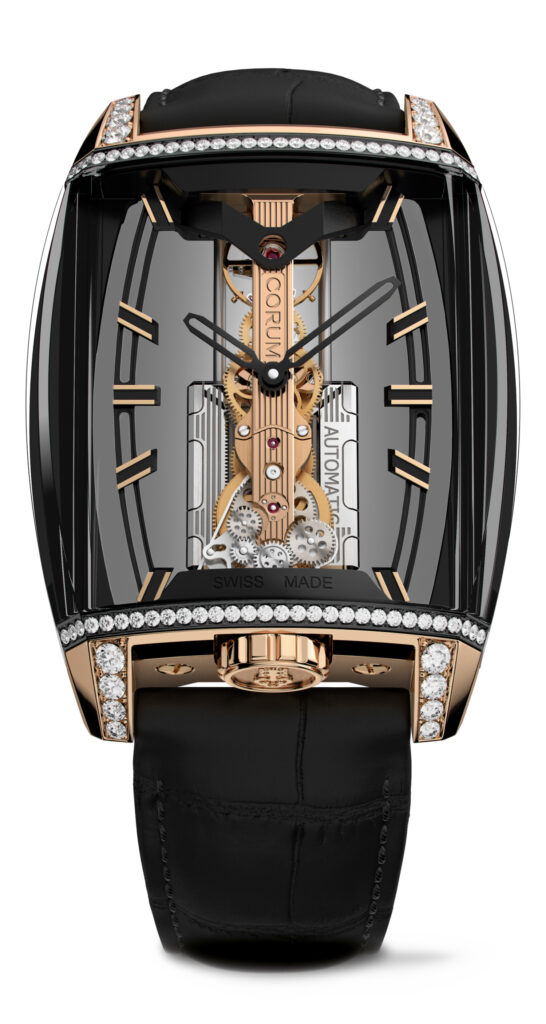 Corum pays tribute to its Golden Bridge with two new limited edition models, each celebrating the watch’s 40th anniversary. Corum has frequently revisited the Golden Bridge in the forty years since the watchmaker debuted its first watch with the linear-gear movement.

The architecturally sublime caliber, initially designed by Vincent Calabrese, was re-engineered by Corum in 2011 and has been variously offered since then with manual winding or automatic winding.  While Corum usually places the in-line movement in a rectangular or tonneau case, Corum began offering the movement within round cases for the first time in 2016 with precious metal and gem-settings.

With these two anniversary Golden Bridge models, Corum returns to the original manual-wind caliber designs. In the Caliber CO113, the viewer’s eyes are drawn along the path following the movement’s energy transfer, starting at the spring barrel at 6 o’clock up to the escapement at 12 o’clock.

With this commemorative offering, Corum emphasizes the Golden Bridge’s original rectangular case. Two 29.5mm by 42.2mm models, one in white gold and one with a rose gold case, celebrate not only the Golden Bridge’s anniversary, but also an aspect of Corum’s own history as a new watchmaking company, founded in 1955.

On the white gold Golden Bridge Rectangle 40th anniversary model, Corum hand-engraves flowers onto the case in reference to its ongoing collection of Haute Horlogerie models. The depictions of the acanthus and fern plants are a nod to a style created in Corum’s home of La Chaux-de-Fonds. These are the same engravings Corum has placed on all Golden Bridge baguette movements since the timepiece was launched in 1980.

With the rose gold edition of the Golden Bridge Rectangle 40th Anniversary watch, Corum is also celebrating its own sixty-fifth birthday. This 18-karat rose gold version will be made as a limited edition of forty pieces, each engraved “Limited Edition 1 0f 40” inside the case at 3 o’clock. In addition, you’ll find the Corum key logo metallized in an eye-catching, light-diffusing pattern on a sapphire crystal caseback. 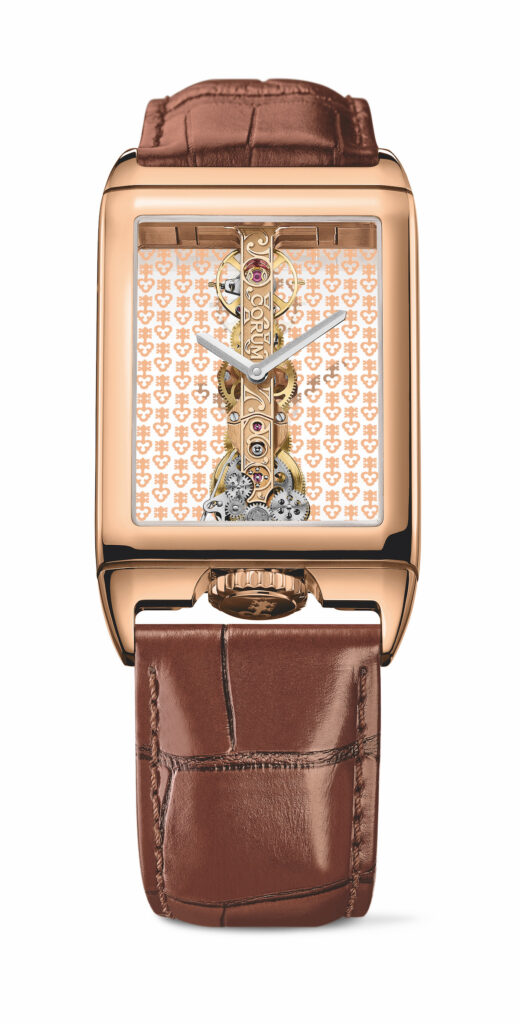 With its pennant-shaped markers and distinctive case shape, Corum’s Admiral Cup is as identifiable on the wrist – even when seen across a room – as the Corum Bubble. This in part explains why the relatively young Swiss watchmaker (founded in 1955) frequently turns to the popular nautical-themed collection when introducing new materials or enhanced functions. 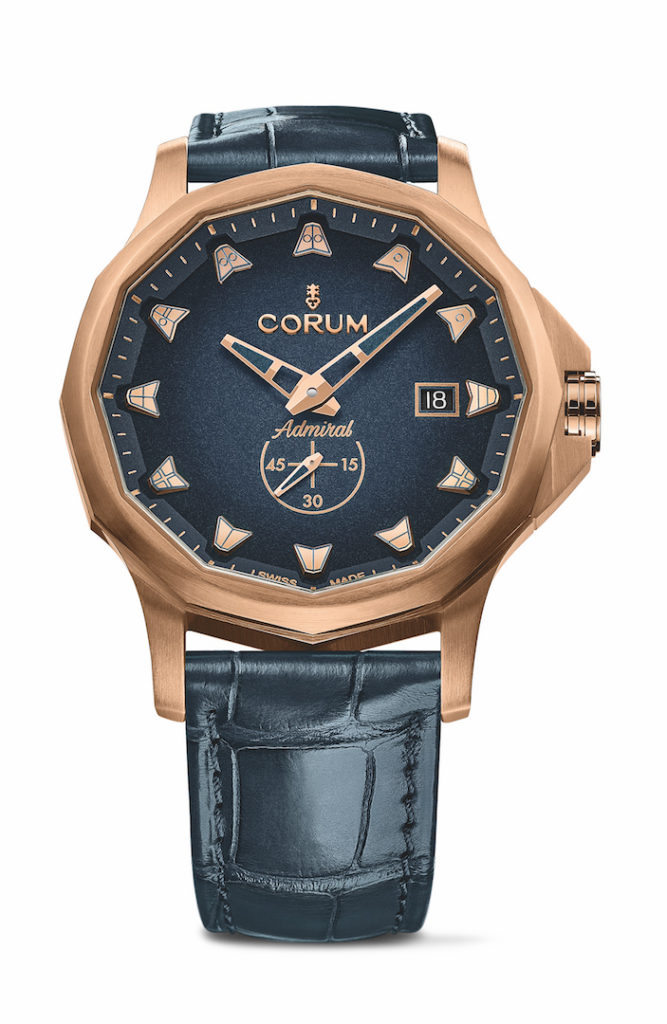 Corum is again tapping the Admiral’s Cup collection (here dubbed the Admiral 42) to sport a relatively rare feature for Corum: a bronze case.  And while the first such model, an Admiral 45 Chronograph seen several years ago, showed us a dark ‘pre-patinated’ bronze alloy, this latest example starts with a brighter satin-finished bronze case. 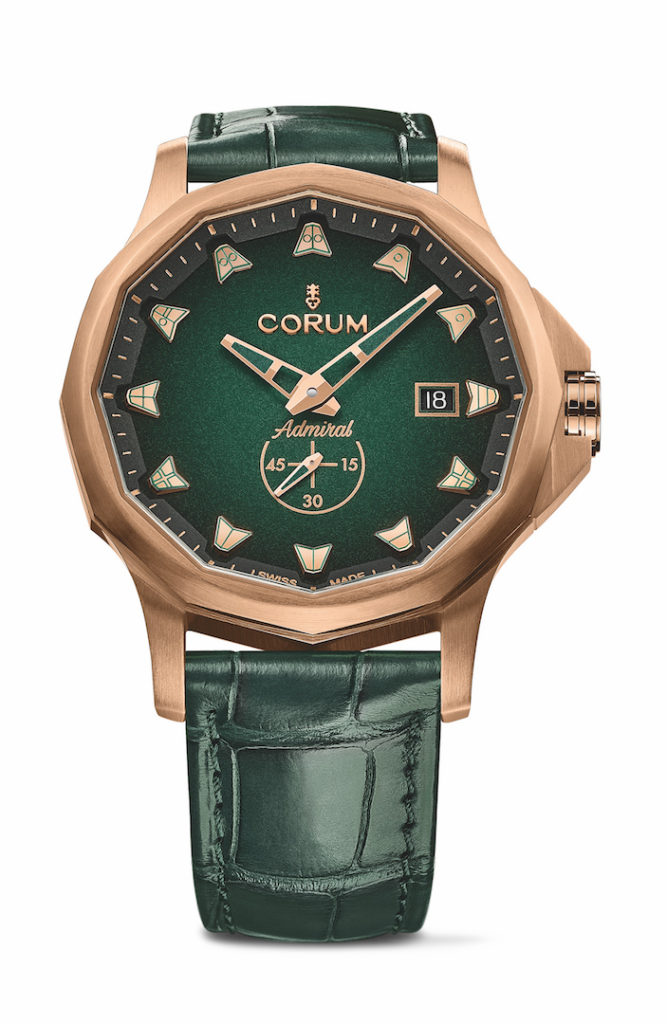 The newer bronze alloy will patina over time evenly, according to Corum, imbuing the entire satin-finished 42mm by 10mm twelve-sided case and bezel with a nautically appropriate vintage look that Corum says will “pay tribute to the beauty and strength of the brass material used in old ships.” 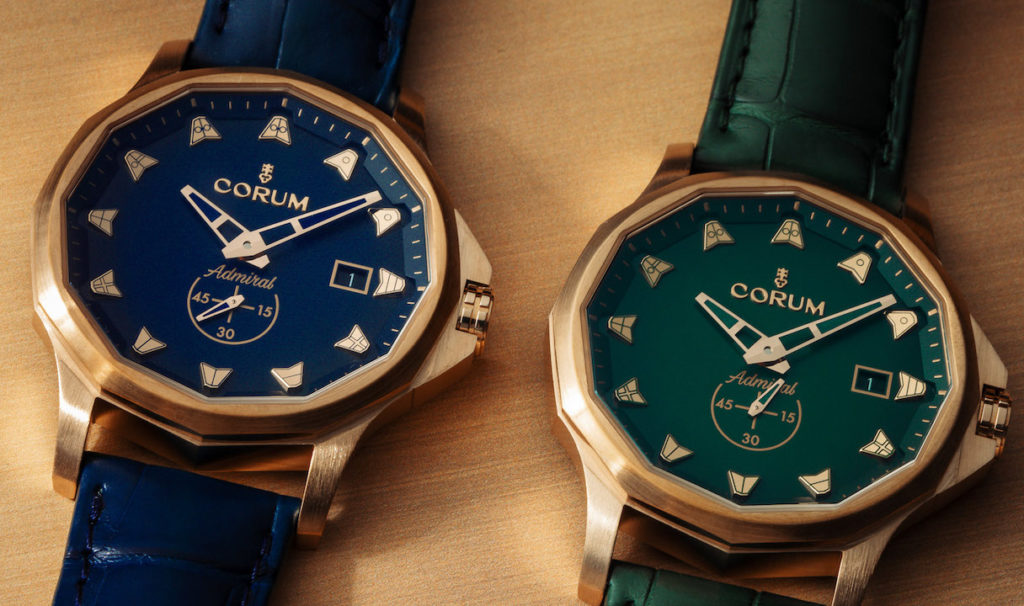 As seen throughout the Admiral collection, the new bronze model features twelve 5N gold-coated, pennant-shaped hour markers on the dial. But unlike many other Admiral’s Cup models, these marker are subtly marked with one color (to match the dial) rather than touched in multiple hues.

Apparently to underscore the watch’s eventual vintage bronze case color, Corum has also added an interesting vintage-looking Admiral logo at the top of the running seconds subdial just above the 6 o’clock position. Nice. 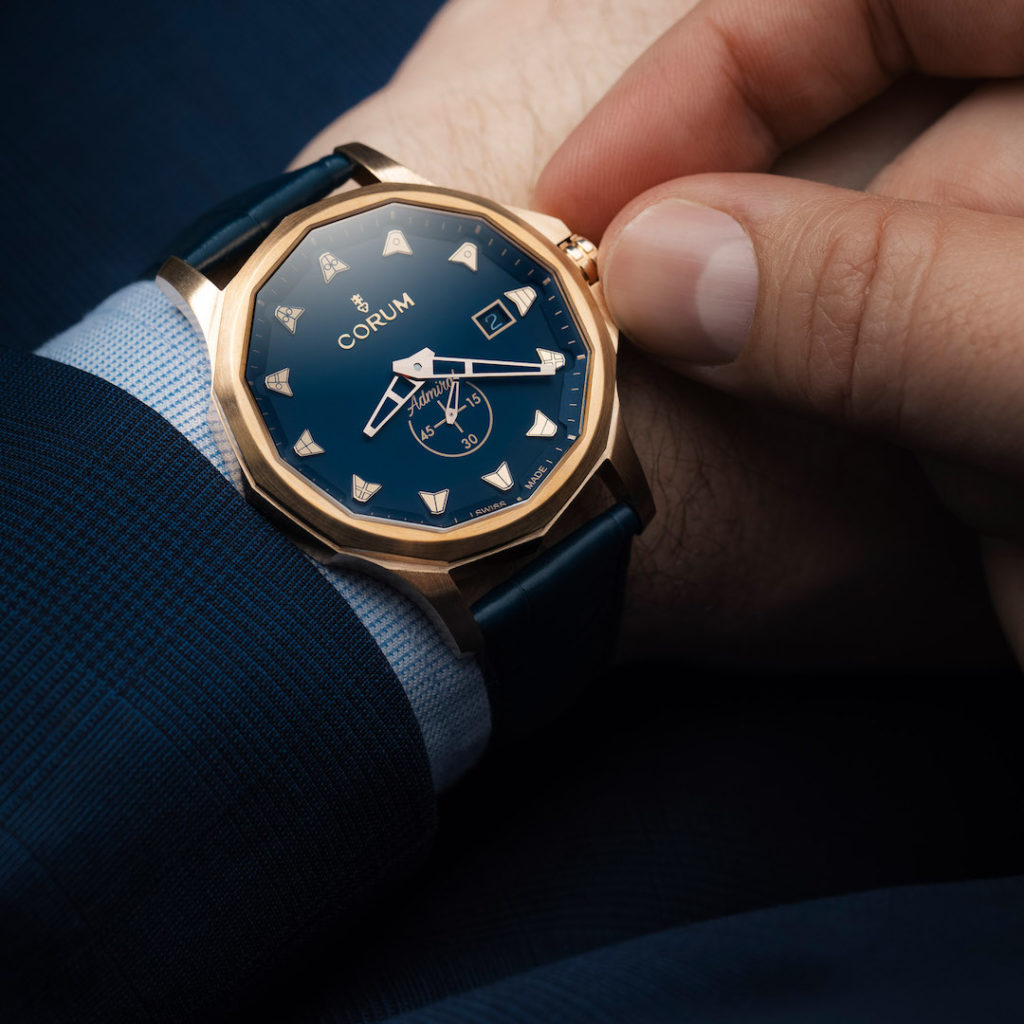 Corum offers the watch in either a navy blue or maritime green dial, each fit with a matching alligator strap. Skeletonized gold Dauphine hands are filled with either green or blue SuperLuminova that will glow to match the dial color. 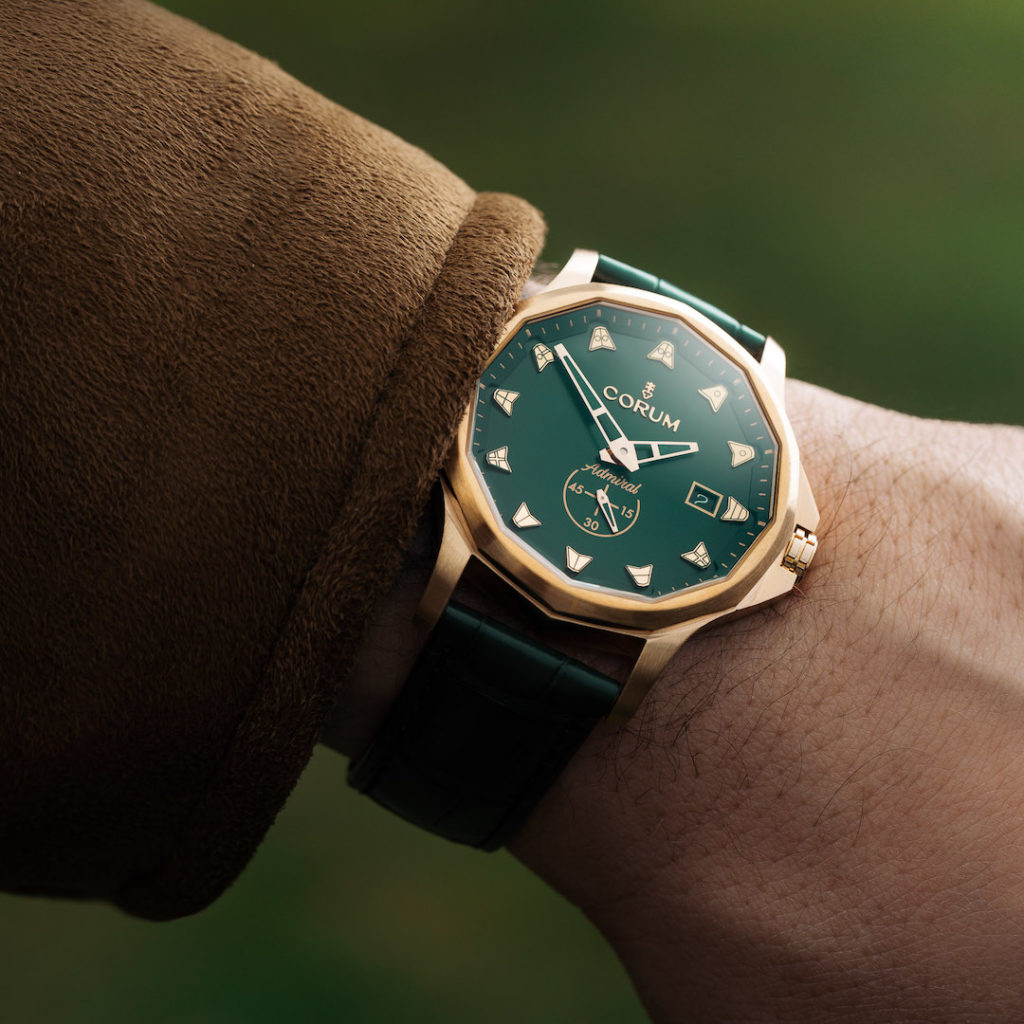 Inside the watch Corum places the ETA-based CO 395  automatic movement, which it makes visible through the sapphire case back. Price to be determined.