A look inside a Claude Meylan skeleton watch.

Skeleton watches can be a polarizing topic, one that elicits strong opinions from all sides. There are those who dislike skeletons for what they consider a lack of legibility. Others prefer the simplicity that a plain dial can offer and look askance at the busyness of a dial-free watch.

Then there are other critics who dismiss a skeleton watch as a frivolous gimmick.

But there are many skeleton enthusiasts who appreciate the watches for their fun and whimsical nature, two elements that can remind us why we initially became enchanted with timepieces in the first place.

The people in this camp understand that in a world flooded with quartz movements and smartwatches, which can perform hundreds of functions better, faster and more reliably, a skeleton display is one thing that a mechanical movement can always do better.

For true fans, these special timepieces offer a rare glimpse into the innermost workings of the magic and the science involved in what makes a watch tick. By exposing all the parts, by cutting away any extraneous piece and distilling everything down to the basics, the curtain of mystery is pulled back, revealing a timeless ballet where every component works together in harmonious balance.

When the movement is exposed, every decision regarding what to remove and what to leave behind becomes critical.

Not only do skeleton movements reveal this mesmerizing piece of performance art every time we breathe life into them by winding the mainspring, they also serve a practical role as tiny timekeeping machines.

It is the blending of these two worlds, one of art, the other of science, that effortlessly combine in a skeleton to form a beautiful and beguiling whole.

That’s not to say that all skeleton watches are worthy of such praise. There is no shortage of examples of the skeletonization process done poorly. When the movement is exposed, every decision regarding what to remove and what to leave behind becomes critical. Too little decoration can leave a movement looking cold, while too much can make it look gaudy.

There are also important decisions to make regarding proper handsets that create enough contrast to enhance legibility.

Clearly, it is no easy task to create a skeleton watch that is beautiful, functional and practical.

Given this era of uncertainty, it is understandable for watch manufacturers to play it safe and perhaps release another dive watch or maybe a vintage-inspired heritage model. In a landscape awash with an ever-increasing number of safe bets, Claude Meylan has opted to instead steer clear of the trends and forge its own path.

The decision to avoid each new trend as it emerges can make for a perilous journey, yet taking the unpredictable, less-traveled road ensures that Claude Meylan’s timepieces stand apart.

The Claude Meylan name itself was aptly chosen as it pays homage to the very same pioneering spirit of the original Meylan family. As a distinguished clan, members of the family have figured prominently throughout Swiss horological history, and it is not uncommon to find individuals bearing the name still occupying key positions within the watch industry today.

Historical records reveal that the Meylans were one of the first four families to bring watchmaking to the Vallée de Joux in the Jura region of Switzerland.

It is in the small village of L’Abbaye, nestled in that same valley within the Jura mountains, that the modern Claude Meylan – surrounded by history – has decided to chart its future.

While others are content to play it safe and tiptoe past the bone yard, Claude Meylan has not. Despite featuring a range of traditionally dialed timepieces, les squelettes have figured prominently in the lineup from the early days of the company’s inception in 1988.

With a retail price of $1,450, the 6045 Skeleton represents the entry-level within the Claude Meylan stable of timepieces.

Other models in the lineup include chronographs in the Legends Line, the popular tonneau-shaped Tortue Series, the truly unique Poya, which sets a small watch movement within a larger case that serve to display tableaus of fantasy dreamscapes. The innovative Fenêtre sur Temps features watches with rotating disks with a window cut out to serve as the hour hand.

The 6045 Skeleton utilizes a Unitas caliber 6497, initially introduced in 1950 as a pocket watch movement. Measuring 16.5 lignes or 36.6mm, the manual-wind movement had been quietly waiting in the wings for decades until being pressed into service to power wristwatches as in recent years as fashion trends pushed case sizes ever larger.

The ETA Unitas 6497 is available in a few different skeletonized options, including a modern, angular design and even with PVD coated offerings.

The type Claude Meylan selected for the 6045 Skeleton is of a more traditional design and features the familiar scroll work that has come to be associated with skeleton movements.

The watch’s 42mm stainless steel case is polished on all surfaces. Although of ample size, the watch wears comfortably owing to its relatively shorter lug length.

The unsigned crown is well proportioned to the case and also is of substantial size, suitable for its role on a manual-wind movement.

The steel case is topped off with a flat sapphire crystal, giving the whole package a sleek modern feel while creating an interesting counterbalance with the traditional mechanical movement.

The spade-style hands are blued and contrast nicely against the steel plates of the movement, giving the watch a high level of legibility for a skeleton.

Because this Unitas was initially created as a pocket watch movement, the sub-seconds hand is found at the nine o’clock position when fitted into a wristwatch.

The silvered (or white or black) rehaut carries Roman numerals and is thin enough to be unobtrusive but substantial enough to adequately perform its function. It features two different finishes, a frosted main section and a polished inner rim that carries the minute marks. 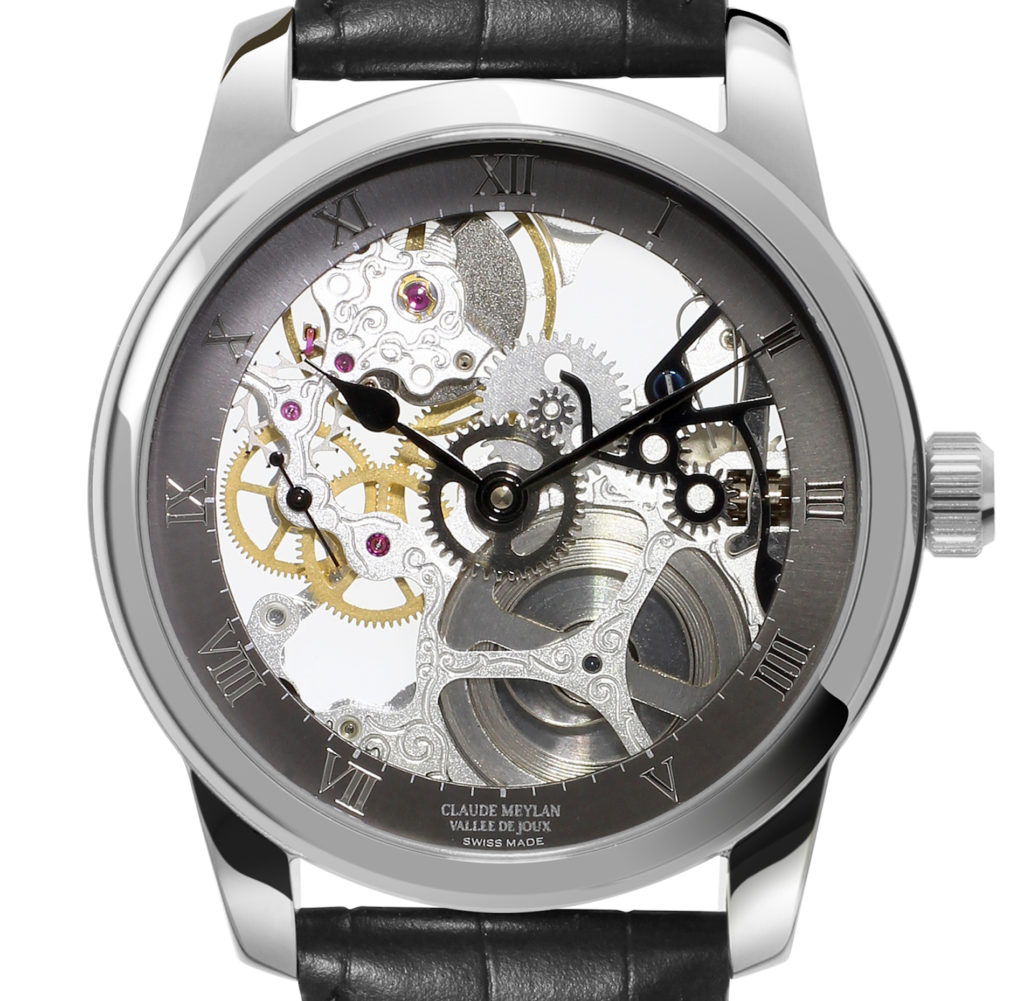 These small touches and attention to detail impart upon the watch a quality that resonates well above its asking price.

Turning the watch over and observing the backside, the eyes are treated to an even more delightful view of the movement. Ruby-red jewels are juxtaposed against blued screw heads, both of which are sprinkled generously throughout, as if the engineers were bakers putting the final glittering touches atop a cake.

The designers at Claude Meylan continue to remind us that it is actually possible to achieve addition through subtraction. There is much for us to learn about how a watch functions simply by observing how all the components interact with one another.

But the most important thing we can learn from a skeleton has nothing to do with the science of timekeeping.

By stripping away everything down to the absolute necessities, we are left with nothing but the essential, and in doing so a skeleton reveals its greatest lesson: that the bare essentials are all we ever need.

Eric Gregoire is a watch collector and writer, who has covered a broad range of topics within the world of horology for more than twenty years. His latest book, “Eternal Springs: An Introduction to the World of Mechanical Watches,” is available for electronic download on Amazon here:  https://www.amazon.com/dp/B082HFCQMJ