I first became aware of Richard Paige approximately nine years ago via various watch forums. We instantly hit it off because we appreciate Art Deco and independent watchmaking. Before establishing his own brand called RPaige Watches, Richard owned a successful high-profile watch boutique in California. The flagship store called, Paris 1925, was located in San Francisco.

However, after several years in the business, Paige became very frustrated dealing with corporate groups. At this stage, he started TimeZone.com, which is considered a template for many new watch blogs.

For several years Paige has resided in Honolulu, where he spends his days creating beautiful timepieces for discerning customers around the globe. The unique selling point of RPaige Watches is the striking Art Deco-inspired aesthetic and the choice of historic movements. Early on, Richard decided to use vintage pocket watch calibers from Elgin (Illinois) and Waltham (Massachusetts) and originally manufactured between 1897 and 1929.

Over the years Richard has created several popular collections like the Aviator, DuoFace, Skyscraper and Speakeasy. A few months ago Paige mentioned to me that he would be unveiling a dress style watch called the JukeBox, inspired by the 1940’s Moderne style of vintage watches.

JukeBox is a departure from the Art Deco style, and is the smallest timepiece RPaige has created, with a brushed steel case measuring 41mm x 12mm. Certainly, the finished result is impressive, and I am sure devotees of the brand will be enticed.

Even though the JukeBox is a limited series (100 pieces) every watch will have a different dial. This means that customers essentially will get the opportunity to own a unique 1/1 piece that is assembled in Paige’s own workshop. 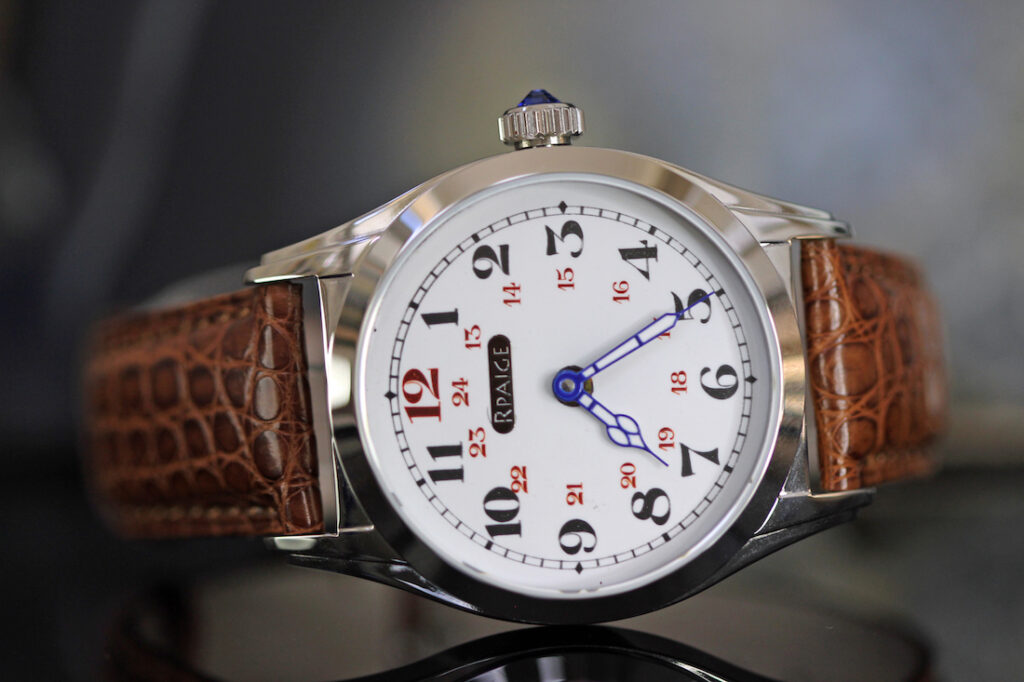 For this review, I’ll focus on the latest JukeBox model (numbered 71/100) with a beautiful white vintage antique fire-enameled dial. It is also priced very competitively at $1,400.  Other features include bold black (12-hour) and red (24-hour) Arabic numerals. This model also has a steel crown with inset blue crystal and blue enameled Cathedral style hour/minute hands with luminous coating.

Powering the watch is a Swiss-made Elabore-grade (higher-end-version) 17-jewel Unitas 6498-1. The manual-wind mechanism oscillates at a frequency of 18,000 vibrations per hour and is visible via the sapphire crystal exhibition case back.

This use of the Unitas caliber represents a different direction for RPaige, which has previously only used vintage U.S. calibers. I suspect it’s an availability issue, but feel this is a great alternative. 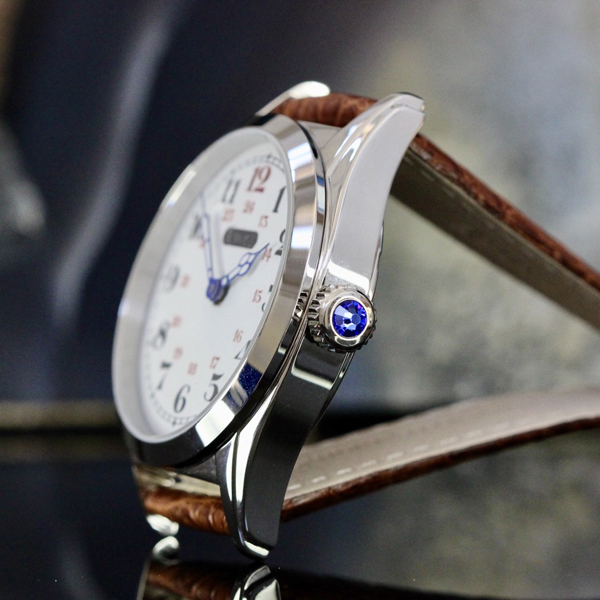 As a final touch, the JukeBox is presented on a brown genuine alligator strap, with brown stitching and steel buckle. Price: $1,400.