And look for seven full-line references in two sizes (43mm and 36mm) in the new collection. All but one of the new Aquaracer 300 Professional models will be cased in steel (with blue, black or silver dials) while one collection (with a green-dial) will be made using a titanium case. 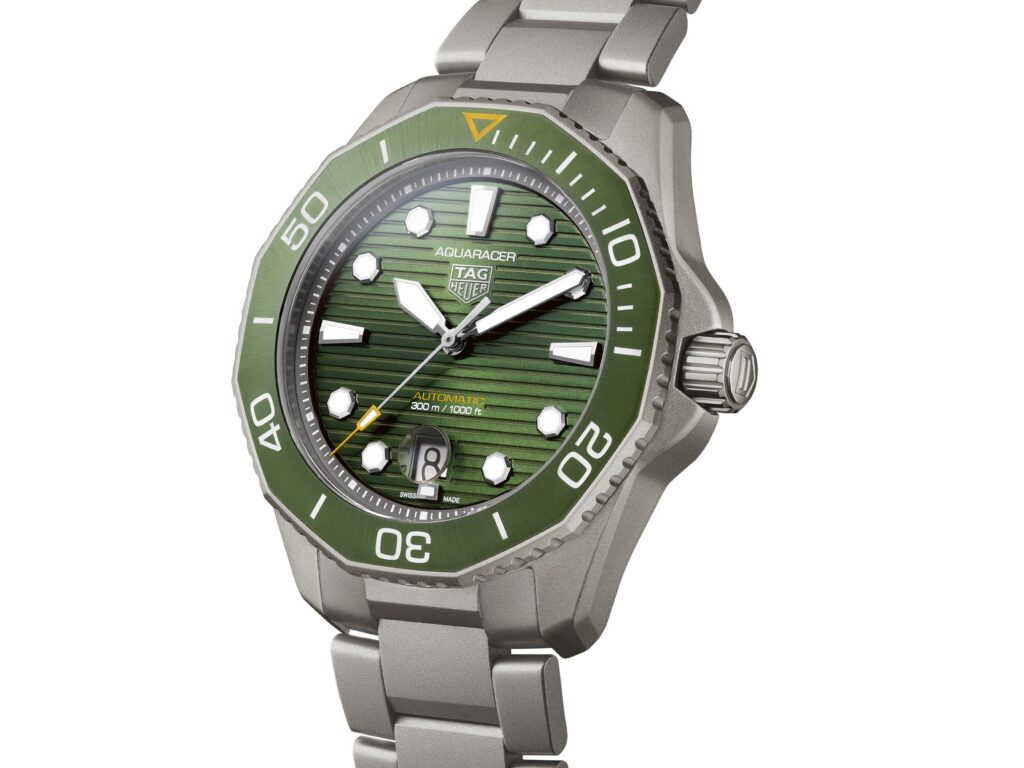 All told, four of the new references will have a 43mm case diameter, and three will feature a case measuring 36mm, with one of the smaller size models sporting diamond hour markers.  An eight model is a titanium-cased limited edition celebrating the 1978 watch that led to the Aquaracer collection.

TAG Heuer has updated nearly all the characteristics that TAG Heuer has deemed essential for every Aquaracer since 1983. Since that year watches in the collection have included a unidirectional rotating bezel, a screw-down crown, water resistance to at least 200 meters, luminous markings, a sapphire glass and a double safety clasp. 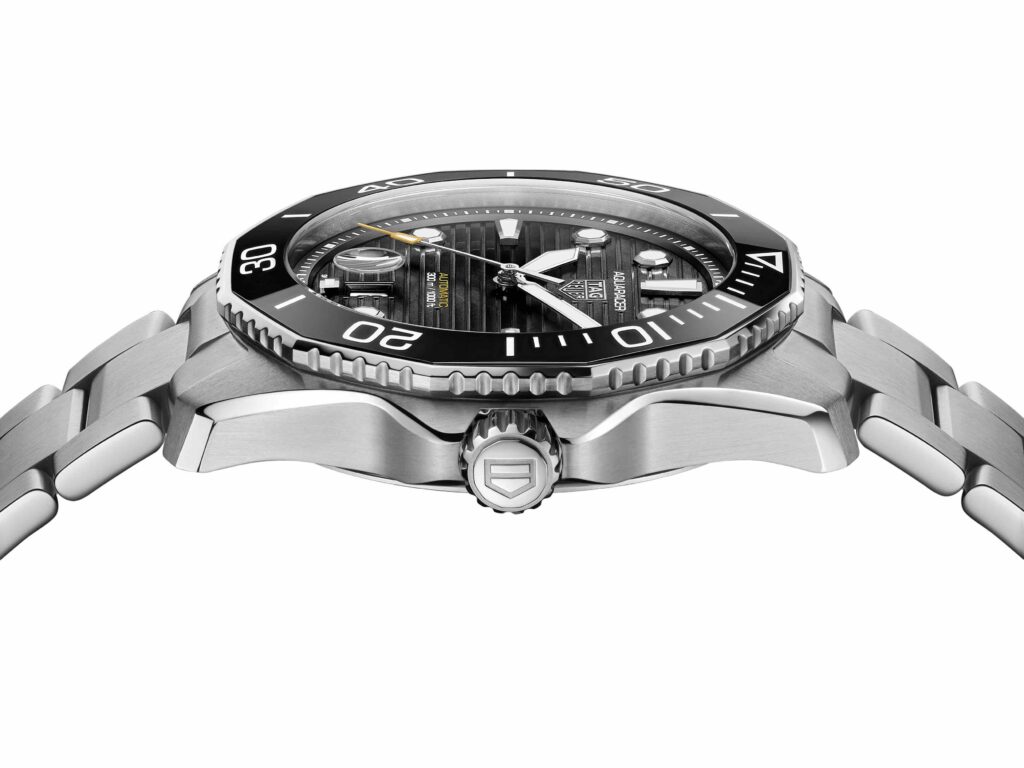 In addition to adding scratch-resistant ceramic inserts in the bezel, as noted above, TAG Heuer has fluted the bezel’s trademark twelve facets for a quicker grip when the bezel needs to be turned. When turning the bezel, the user might note smoother action because TAG Heuer has also re-engineered the bezel’s internal teeth so they mesh with less resistance. Also note the new engraved minutes scale just inside the bezel.

Also new is an integrated magnifier, now positioned into the underside of the glass, over the date at 6 o’clock. Not only does the new position maintain an uninterrupted, flat sapphire crystal, but it also makes the date easier to read from wider angles. 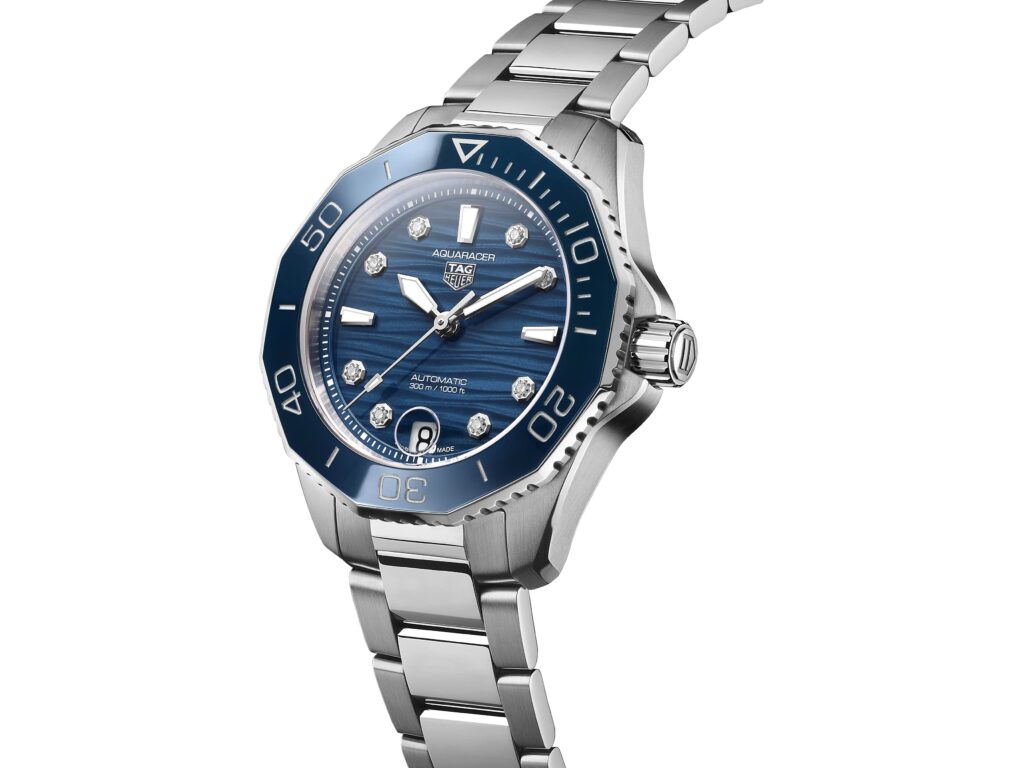 TAG Heuer has also taken the shape of the bezel directly onto the dial. All eight hour markers are now actually lume-filled octagons. Similarly, a new twelve-sided crown has been added, matching the twelve-sided bezel. This helps maintain a design consistency, and confers a pleasing symmetry to the new Aquaracer.

But TAG Heuer didn’t stop at the markers. Note that the hour hand is wider with a more distinctive sword shape. Longtime fans might recognize it from the last of the TAG Heuer 2000 Series from 2004. However, TAG Heuer has narrowed, very slightly, the width of the minute hand to create a clearer distinction between the two hands.

The hands are further differentiated by luminosity hue, with green SuperLumiNova on the hour hand (and hour markers) and blue SuperLumiNova for the minute and seconds hands. The crown protection has been re-made as well. It’s now more rounded, echoing that first Ref. 844 from 1978.

If the central section of the dial looks familiar, it is. But it’s also different. TAG Heuer has kept Aquaracer’s familiar engraved dials with horizontal lines, but on the 43mm models those lines are set a bit further apart. The blue 36 mm model also has eight diamond hour markers and polished central bracelet links 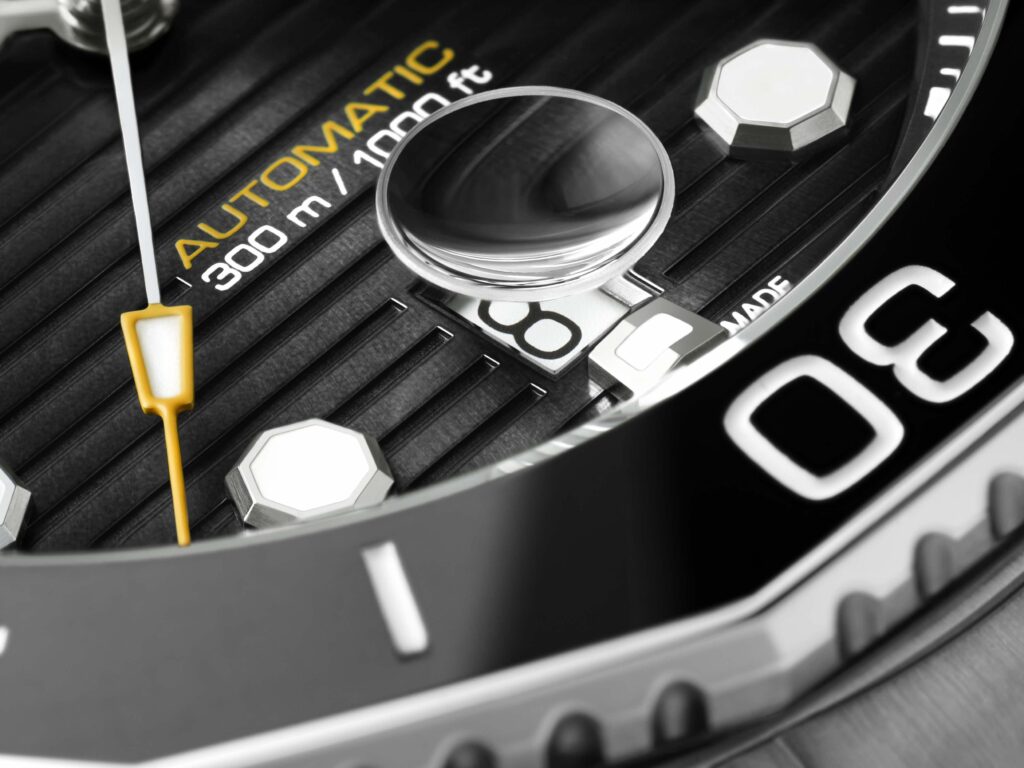 Finally, as noted earlier, TAG Heuer has slimmed the case, bezel and metal bracelet, and shortened the lugs, without affecting the watch’s essential utility and performance. All models will maintain their full 300 meters of water resistance.

On the back of the new Aquaracer Professional 300 TAG Heuer again portrays an image of the same diving suit that first appeared on the Aquaracer caseback in 2004, but with a slight update. The helmet is more angular on the new collection, and the faceplate is twelve-sided, echoing the watch’s bezel shape.

Finally, each new reference features a new integrated metal bracelet equipped with a newer fine adjustment system that can extend or reduce the bracelet length by up to 1.5 centimeters. 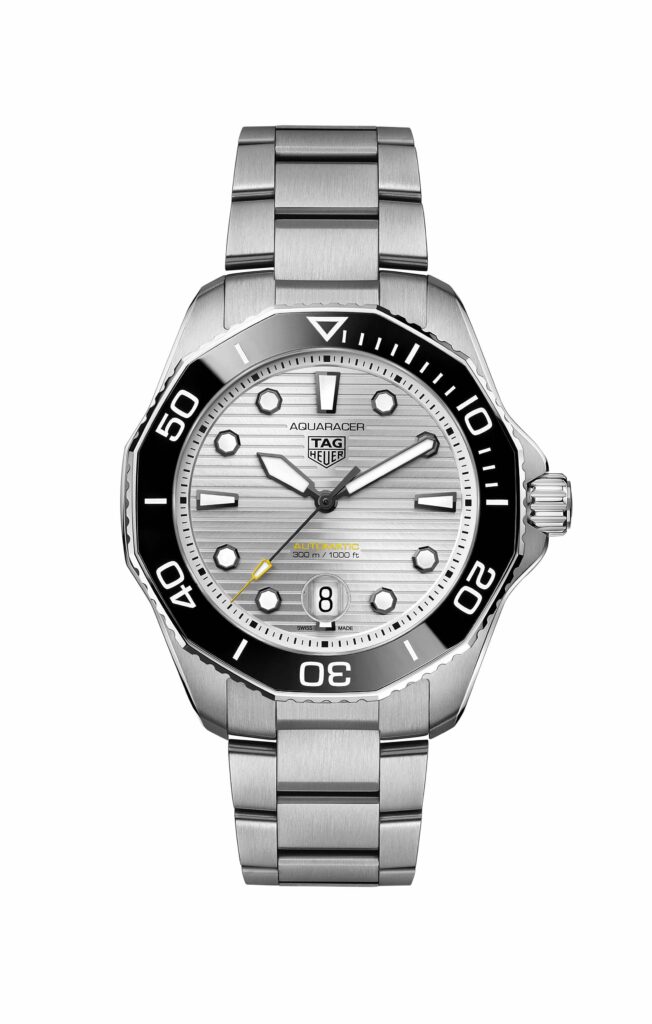 In addition to launching seven new ongoing models within the Aquaracer Professional 300 collection, TAG Heuer is adding a limited edition titanium-cased watch in tribute to the Heuer Ref. 844, a diver’s watch released in 1978 that presaged the Aquaracer collection.

That watch featured a dial design with a red 24-hour scale, prominent lume-filled hour markers and a rotating divers’ bezel with a minutes scale. The new tribute, called the Aquaracer Professional 300 Tribute to Ref. 844, is cased in Grade 5 titanium with visual elements from the archive piece. These include a flat black dial and a red 24-hour scale, originally intended as a quick conversion chart for divers.

The tribute watch also features vintage-hued luminescent material on its dial and arrives with a black perforated rubber strap that echoes the strap sold on the original. But here, TAG Heuer has made the perforations octagonal to maintain the new Aquaracer design code. 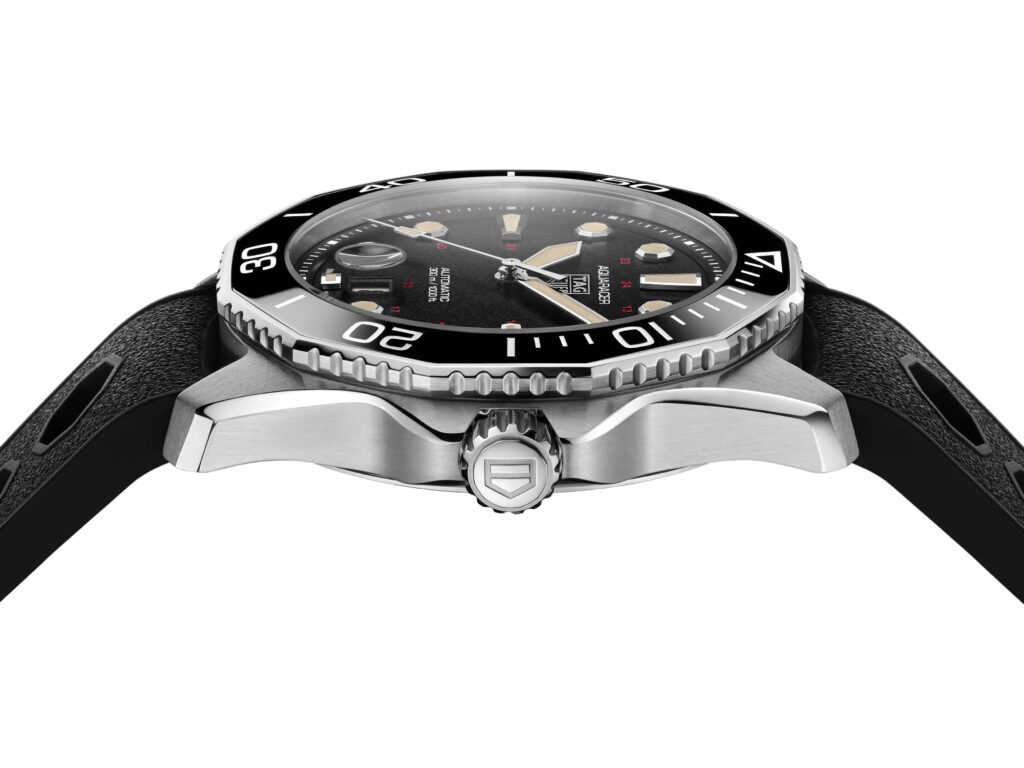