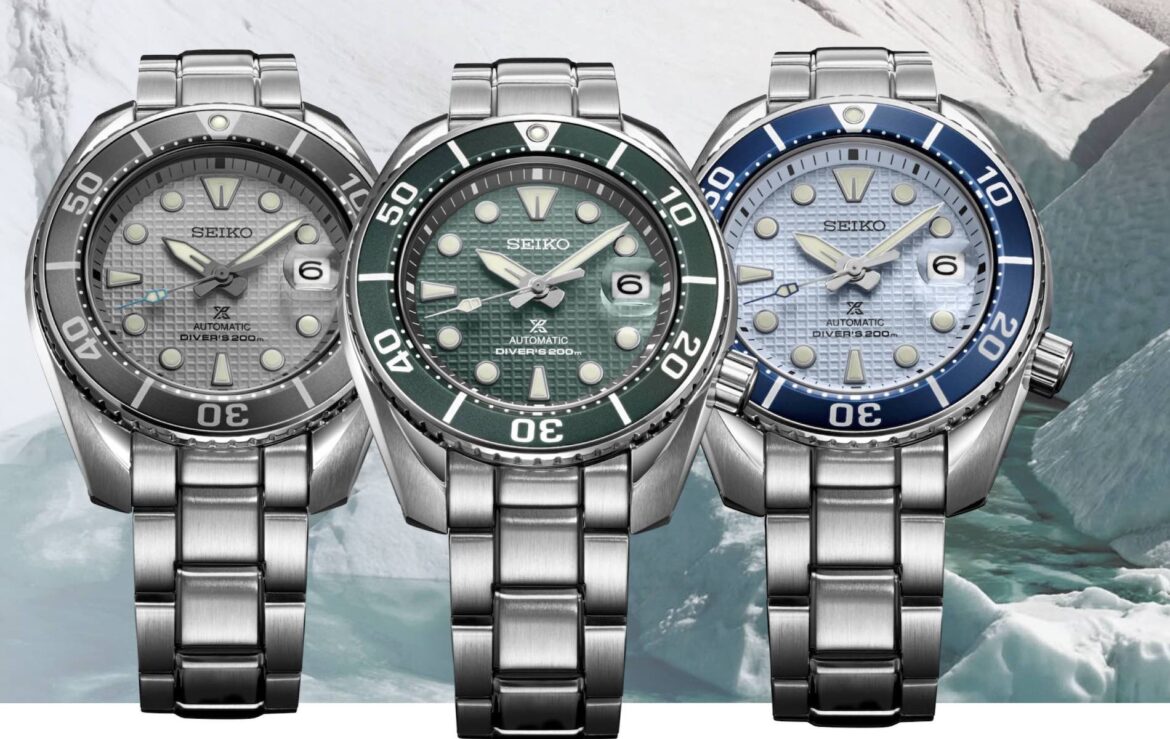 Seiko’s rich legacy of products that represent absolute real estate in the rich tapestry of wristwatch history lend themselves to recreations and homages, with 2020 delivering a singular treat in the release of a three-watch edition that charts the story of Seiko’s indelible mark on adventure, diving and outdoor sports.

Released this September, Seiko’s Prospex “Built for the Ice Diver” collection represents a material homage to Seiko’s 55-year history of producing sports diving watches, beginning in 1965 with the release of Japan’s first dive watch, the 62MAS.

The new collection is comprised of recreations of highly desirable classics that represent modern technology brought to bear on a vintage subject.

“Built for the Ice Diver” is a reference to Seiko’s position as Japan’s watch for the adventurer, tested in extreme conditions both underwater and as a companion to high mountaineers. The 62MAS set the standard for many subsequent Seiko dive watches, with an automatic movement, quickset date and 37mm stainless steel case capped with a plexiglass crystal and rectangular tritium minute markers, ratcheted bezel and broad hands. Vintage examples sell for more than $4,000.

This particular watch, of the many, many variations of Seiko’s developed across multiple markets, grew to prominence because of two men, one real and one fictional. The first, acclaimed Japanese Adventurer Naomi Uemura, chose the original Seiko 62MAS because it was a robust, waterproof watch, and made in Japan to boot.

Sure, he could have picked a Rolex Explorer or Blancpain Fifty Fathoms, like any other run-of-the-mill international adventurer, but Uemura was a standard bearer for his country and selected that most Japanese of all brands, Seiko. He (probably) wore the watch throughout many of his treks, which included a one-man dog sled run from Greenland to Alaska, the first solo walk to the North Pole and ascension of the North American Denali Mountain, which marked his last adventure. He disappeared on the Denali hike, presumably with a Seiko on his wrist.

The second man in the Seiko storybook is the legendary “Captain Willard” from Francis Coppola’s film, “Apocalypse Now.” Willard, played by Martin Sheen, wore a Seiko in the same dive watch family, which gave rise to the watch’s status among collectors, (we love our little tribute names, don’t we), and its value on the secondary vintage watch market.

Seiko has re-issued this watch in several variants over the years, and at varying price points, creating secondary and tertiary collectors’ markets for the multiple iterations of this product.

For the uninitiated collector, deciphering the complicated soup of Seiko designations, per market, is itself a treasure hunt and the stuff many lengthy Seiko forum discussions. Suffice to say, the current Prospex Ice collection is alluring enough to satisfy anyone interested in wearing a tough watch that looks like a classic from the analogue era. So, let’s get on with now.

The Ice Diver collection is comprised of three watches, each with its own twist on our theme. Shop for SKUs SPB175 (grey dial/bezel), SPB177 (green dial/bezel) and SPB179 (blue dial/bezel), packaged in the Seiko Sumo case, released exclusively in the North American market and priced at a very competitive $900.

The Sumo variant is a wide (44mm), thin (12mm) all stainless watch case and signed bracelet, powered by a Seiko automatic caliber 6R35 movement, beating at a frequency of 21,600 BPH, pivoting on 24 jewels, with a 70-hour power reserve. It’s water resistant to 600 feet and has a dual curved sapphire crystal. It has a date indicator, rotating bezel, Lumibrite hands and markers and a three-year manufacturer’s warranty.

And if that’s not enough, it’s supplied to the Japanese Antarctic Research Expedition (JARE), which means that the homage on an homage on an homage is now itself a bona fide collectible with its own nascent back story. Face it folks, for $900 this is one hell of a watch – and by the time you read this it will probably be sold out anyway, and headed to become a $1,500 watch on the collector’s market. And so it goes with Seiko.

Prospex is Seiko’s mid-range sports watch brand, with its own higher end LX series. It’s fascinating to watch Seiko grow and prune their brands into unique shapes, like an artistic gardener tending to a Bonsai tree.

With the chain-sawing of brands across many U.S. distribution points in 2019, Seiko drew a line in the sand: cut broad distribution, cut SKU’s, focus heavily on retailers and educate the consumer on the products to create new demand.

This release reflects that tactic in action. The Ice Diver collection plays off the perception of heritage, coupled with limited availability, backed by a lot of watch for the money. Instant collectible equals increased market desire for subsequent releases. Hats off to the company for delivering sales during a time period when we’re seeing other companies disappear into the vanity fueled, limited edition, lofty priced abyss.

For those seeking a classic-looking Seiko homage with all the attributes of current issue Seiko technology, take a look at the GPHG-award-winning Seiko Prospex LX SNR029.

This watch literally straddles both of our planet’s unknown universes: space and water. At a list price of $6,000, this watch gives its Grand Seiko cousin a run for the money. This Prospex LX is titanium, with a case developed by Porsche designer Ken Okuyama and powered by Seiko’s 5R65 Spring Drive movement that is less susceptible to atmospheric deviations than a standard automatic watch. 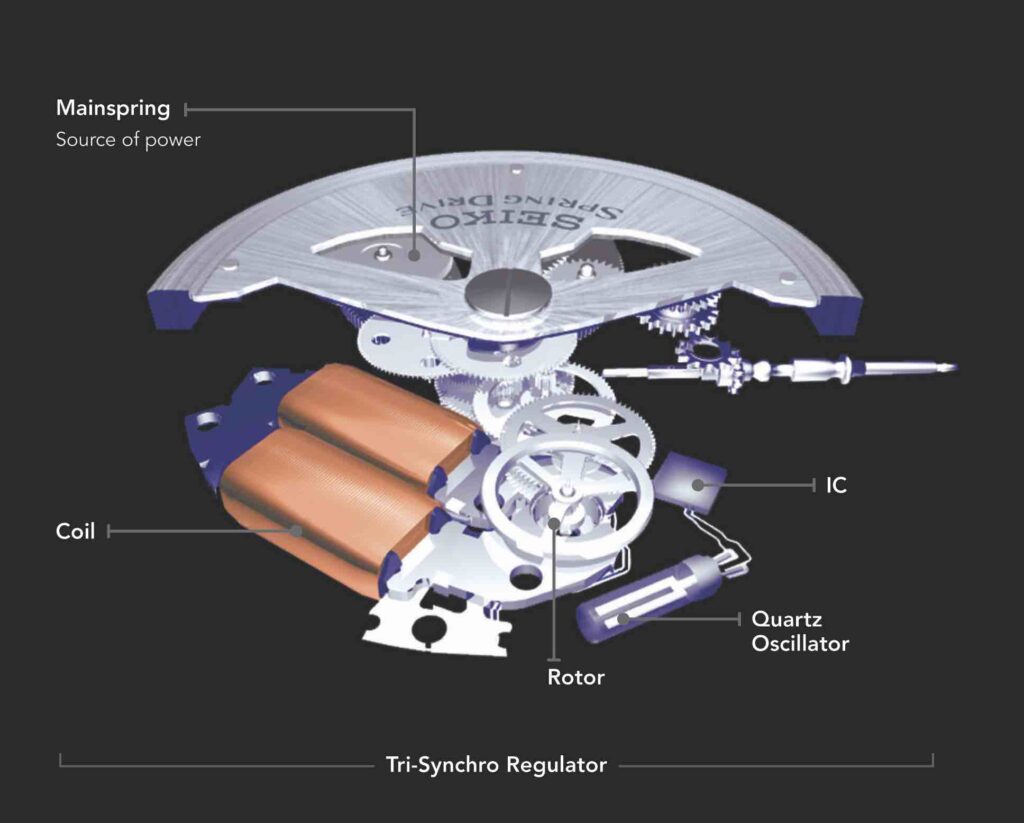 The movement is found in Grand Seiko models and was actually worn in space by video game designer Richard Garriott, a citizen who paid the Russians to make him the sixth non-astronaut to travel to space. Needless to say, he wore a Seiko Spring Drive watch (whaddya think about that, Omega, Breitling, Casio, Rolex and Fortis). If you can get your hands on this classic – grab it!