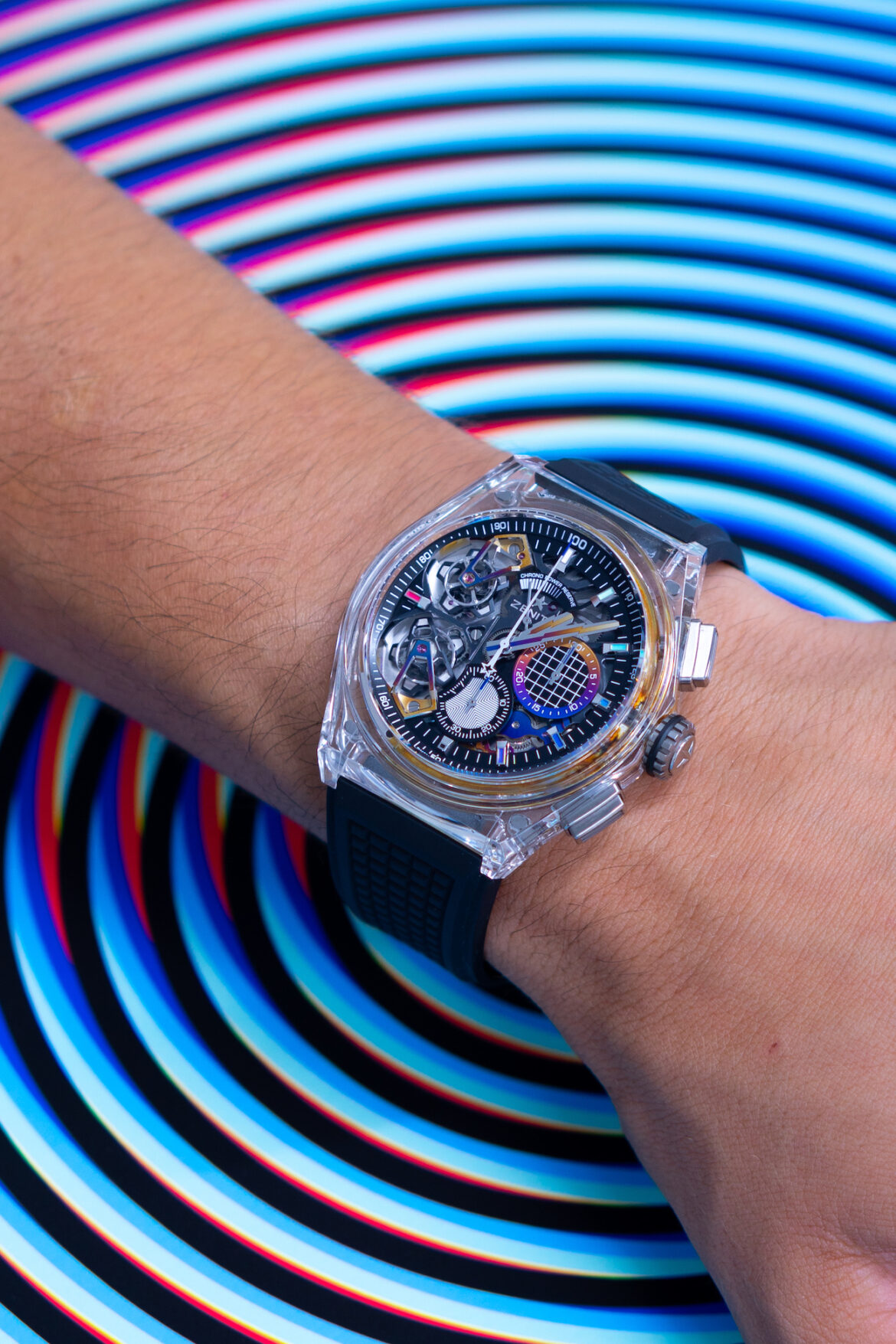 We continue to highlight a few of our favorite watches from among the more than fifty watchmakers that have created timepieces for the Only Watch charity auction, which commences Saturday, November 6, in Geneva. Christie’s will auction these incredible watches to raise funds that benefit research in the battle against Duchenne Muscular Dystrophy.

Click here for details about the Only Watch world tour, which begins September 22. 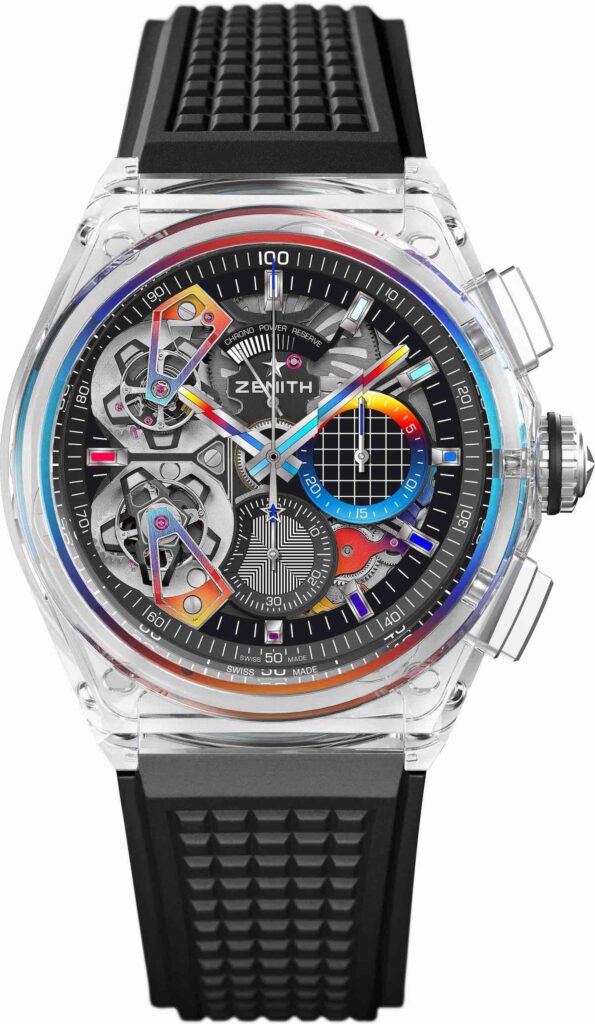 Today, we highlight the offering from Zenith, which has teamed with artist Felipe Pantone for a spectacular special edition of its Defy 21 Double Tourbillon, which here is cased entirely of transparent sapphire crystal ­– a first for any watch in the Zenith Defy collection.

This watch, based on one of Zenith’s most complicated chronographs, is regulated by two independent tourbillons. They operate at five hertz (for the timekeeping function) and fifty hertz (for the 1/100th of a second chronograph). Pantone has transferred his own style to Zenith’s movement’s decoration and the open dial. 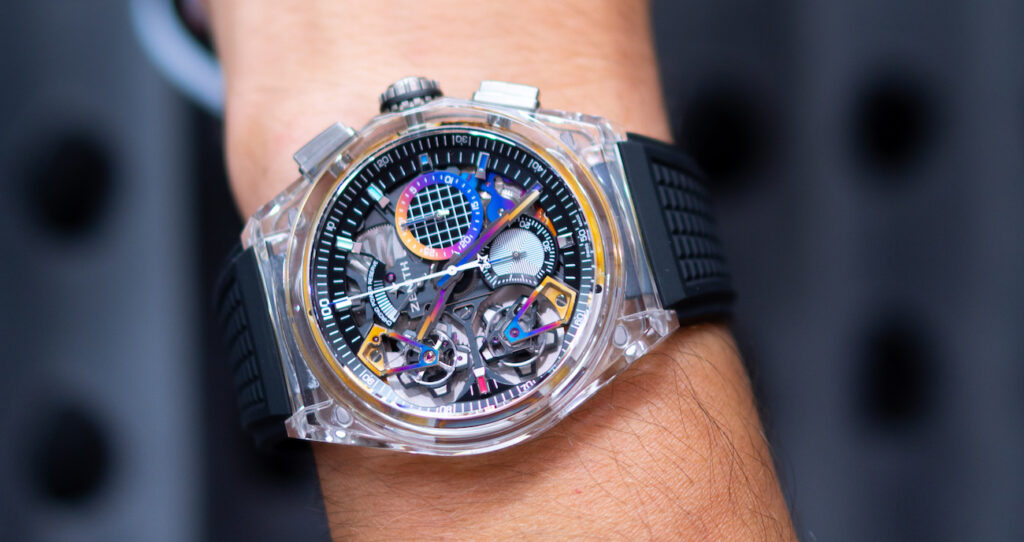 As Zenith explains, it has coated the bridges to reflect a gradient of metallic rainbow tones, marking the first time we’ve seen three-dimensional PVD with silicon particles as a surface treatment on a tourbillon chronograph movement. This produces an-eye-catching spectrum of colors. Zenith then fixes its movement within a case given the same rainbow effect. The caseback sports a similar rainbow PVD coating on the bridges, where “Unique Piece” is engraved on one of them under the blackened star-shaped winding rotor. 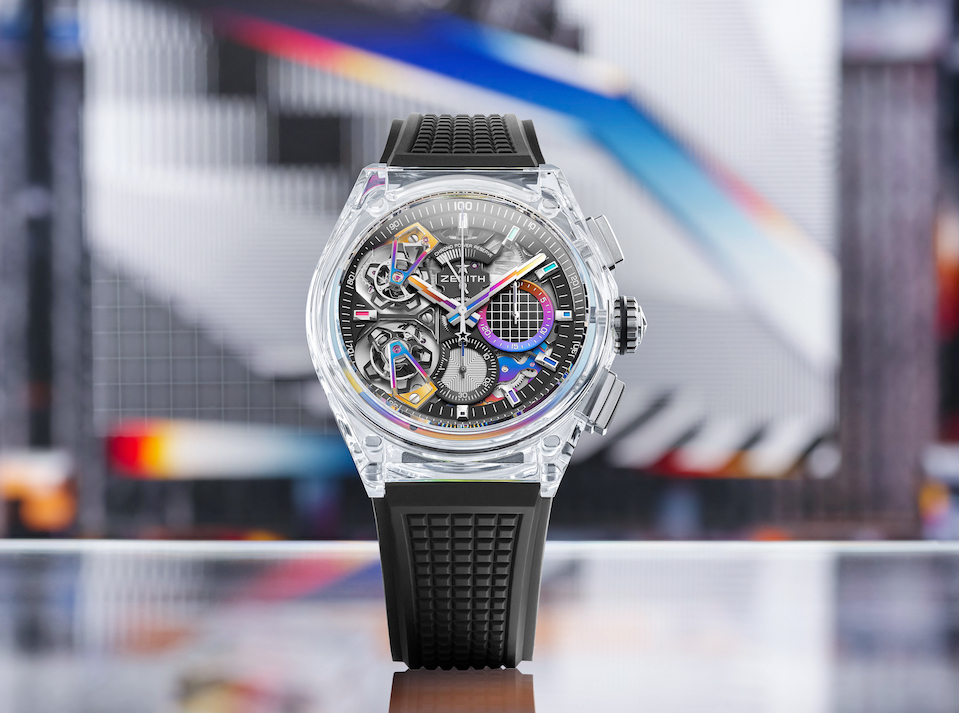 Pantone then distorts the central hour and minute hands to resemble lightning bolts. Echoing the movement, Zenith applies a rainbow gradient of colors in PVD to the hands, while each of the applied hour markers is filled with a different color. Zenith and Pantone create a crazy moiré optical effect on the dial, produced by thin alternating white and black using fine laser-engraving and precise lacquering techniques.

Finally, Zenith will package the watch in a special box resembling an art book and add an original signed artwork by Felipe Pantone.