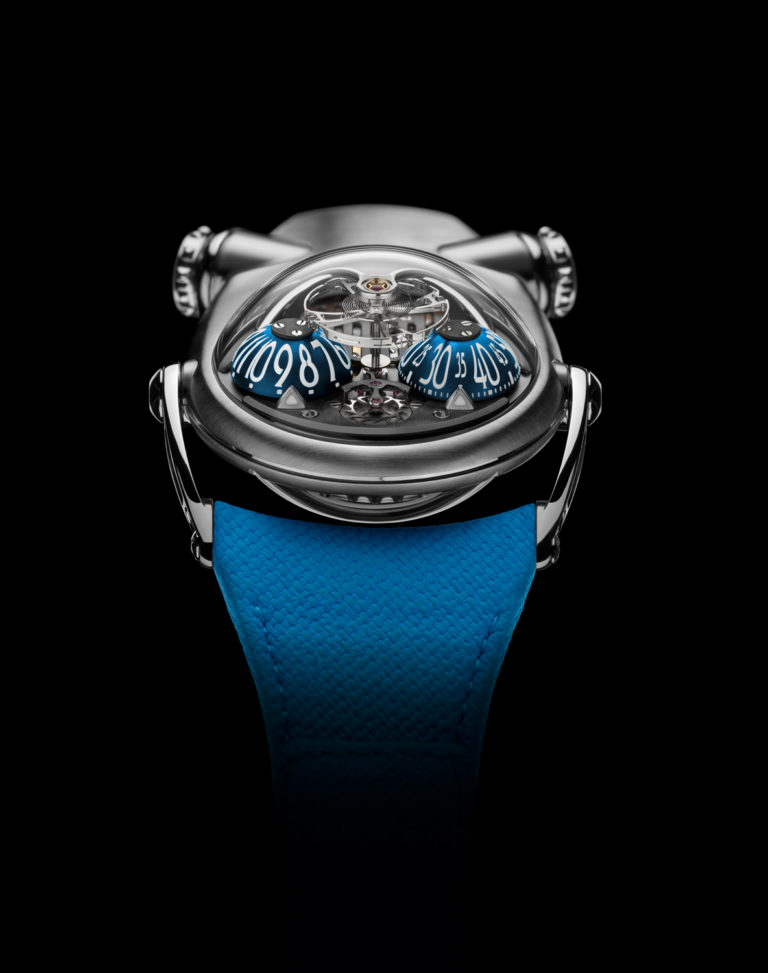 Underneath a familiar sapphire dome, a dramatic suspended balance rotates to and fro over rounded minute and hour time domes (the Bulldog’s ‘eyes’) in the most biomorphic version of this pairing we’ve yet seen from the mind of MB&F founder Maximilian Busser.

Just below the ultra-lightweight time domes, however, MB&F’s design genius then takes another bite out of tradition by devising a power reserve indicator unlike any other. True to its name, the HM10 Bulldog’s power reserve indicator displays its function in the form of a metallic set of hinged jaws that shut to indicate your time is up. When the jaws are open, the HM10 Bulldog shows his teeth and is ready to attack the time, backed by forty-five hours of reserve power.

You may recall another unusual power reserve in a past MB&F machine. The LM1 Xia Hang from 2014 featured a small human figure that bowed to indicate the watch’s reduction in power reserve.

And of course the suspended balance, which we first saw in the Legacy Machine N°1 in 2011, continues here to beat at its leisurely 18,000 vph ­– and still enthralls. This balance has since appeared in most MB&F Legacy Machines, in Horological Machine N°9, and now takes it place at the center of the new HM10 Bulldog.

Another feature here that recalls earlier MB&F designs is the ribbed grille and logo just below the balance. This ribbing motif echoes those found on the auto-inspired HM8, HMX and HM5. The automotive echoing continues with the beautifully brushed case, which is shaped as much like a vintage racecar as a four-legged English canine. And as noted earlier, those ultra-light aluminum domes, first seen in the HM3 Frog, and refined in 2014’s HM6, double as the bulldog’s ‘eyes’ and serve as reminders of MB&F’s history of showing the time using unusual displays.

In yet another canine analogy, the strap attaches to case here thanks to a sprung strap attachment, which could be seen as the Bulldog’s legs, connecting snugly to the wrist. Finally, the calf-leather strap recalls a serious dog-walker’s leash and is fastened with either a folding buckle or using Velcro.