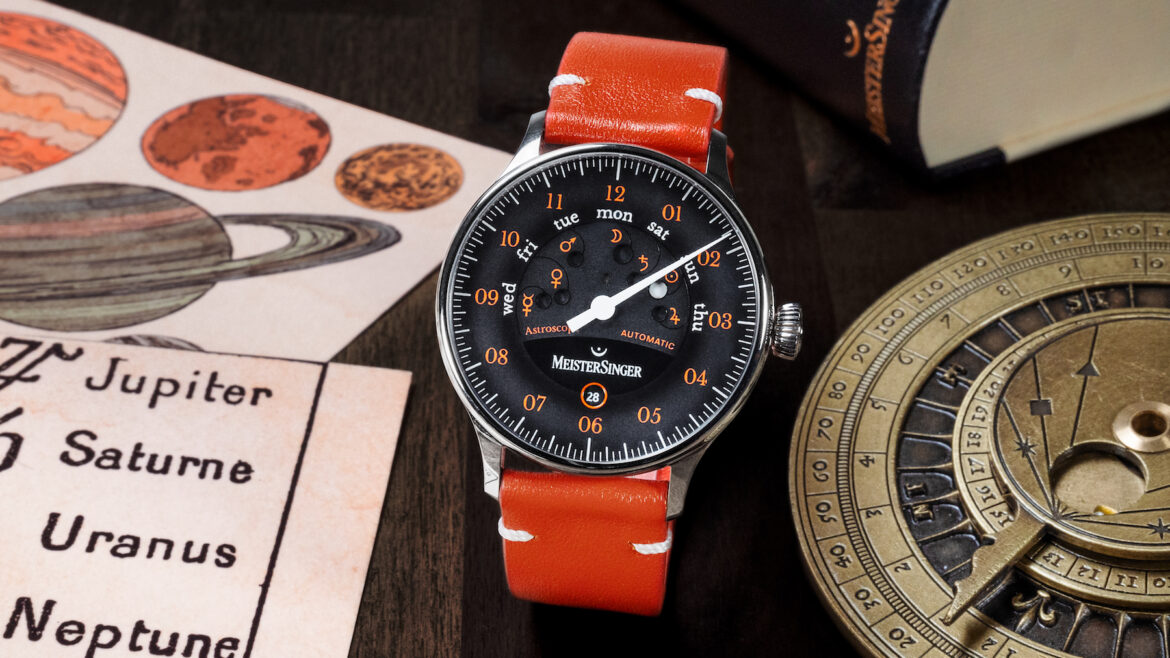 Collectors already know the German-based Meistersinger for its unusual focus on one-handed time displays. But quite frequently the company underscores its rebellious nature with displays and dials that delight the eye with edgy contemporary designs, bold indicators and bright colors.

One such design, the Meistersinger Astroscope, indicates the weekdays quite unlike any other watch. Rather than highlighting each day within a traditional aperture or around the dial in their expected calendar order, the Astroscope denotes the days with a series of bright white dots next to both the abbreviation and celestial symbol. Even more unusually, the days are arranged in an apparently random pattern across the dial, from the 9 o’clock position to the 3 o’clock position.

Meistersinger explains that the Astroscope’s weekday celestial symbols are derived from ancient mythology, which don’t follow the current calendar.

The method most likely dates back to the Babylonians, who connected the days to seven celestial bodies: The Sun, the Moon, Mars, Mercury, Jupiter, Venus, and Saturn.

Meistersinger spreads the days across the dial as if along the horizon, with Monday at the top of the sky. Meistersinger then displays the appropriate celestial bodies and classical symbols next to the day, all of which seem to wander to and fro. The daily dots, imprinted on a rotating disc below the dial,  ‘jump’ across the dial rather than appear in traditional calendar order. 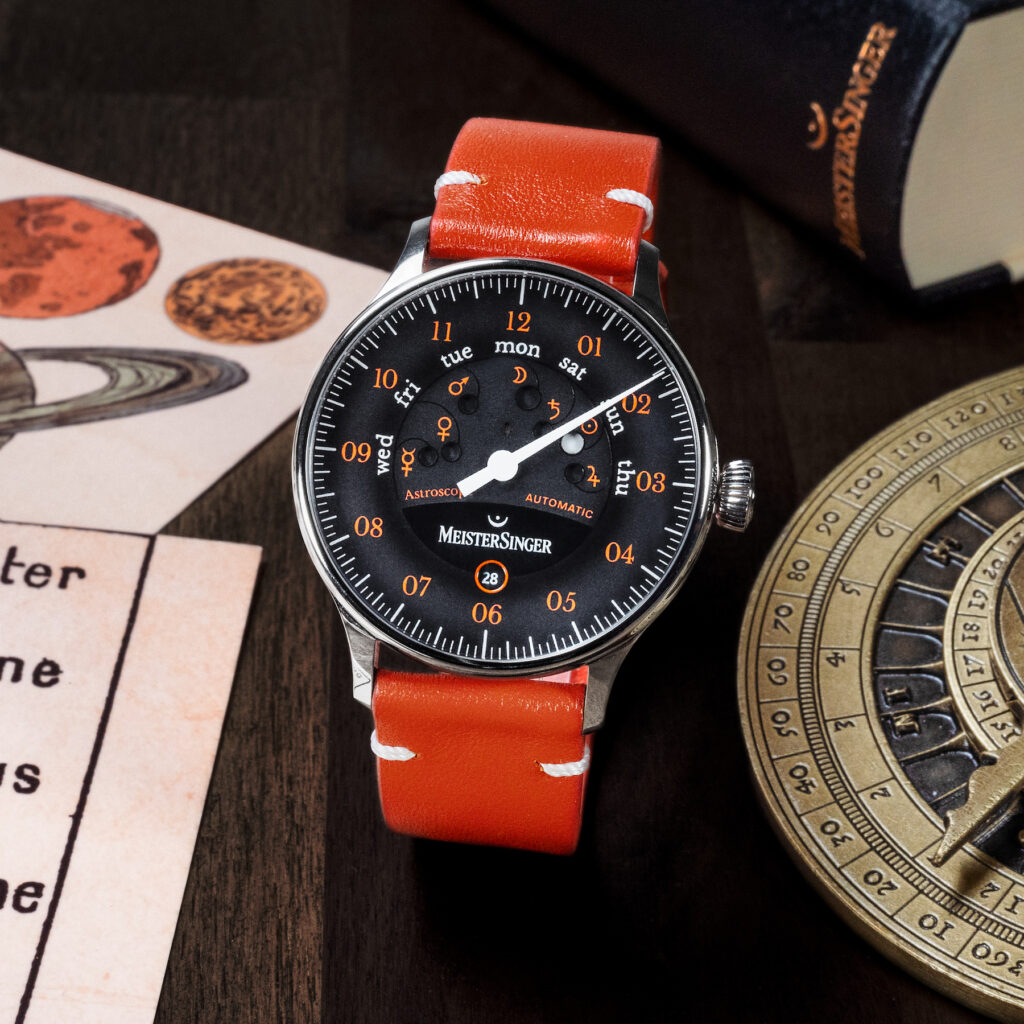 Thus, the week’s displays begin on Monday with a white dot at 12 o’clock (next to the moon symbol), followed the next day just to the left at the Mars symbol. On Wednesday the day dot appears next to Mercury near 9 o’clock. And so on.

Apparently there is a pattern here, according to the brand. It has placed the seven day apertures in a layout that mimics a constellation only seen every ten to twelve years in the southern night sky of the northern hemisphere. Meistersinger doesn’t name the constellation. 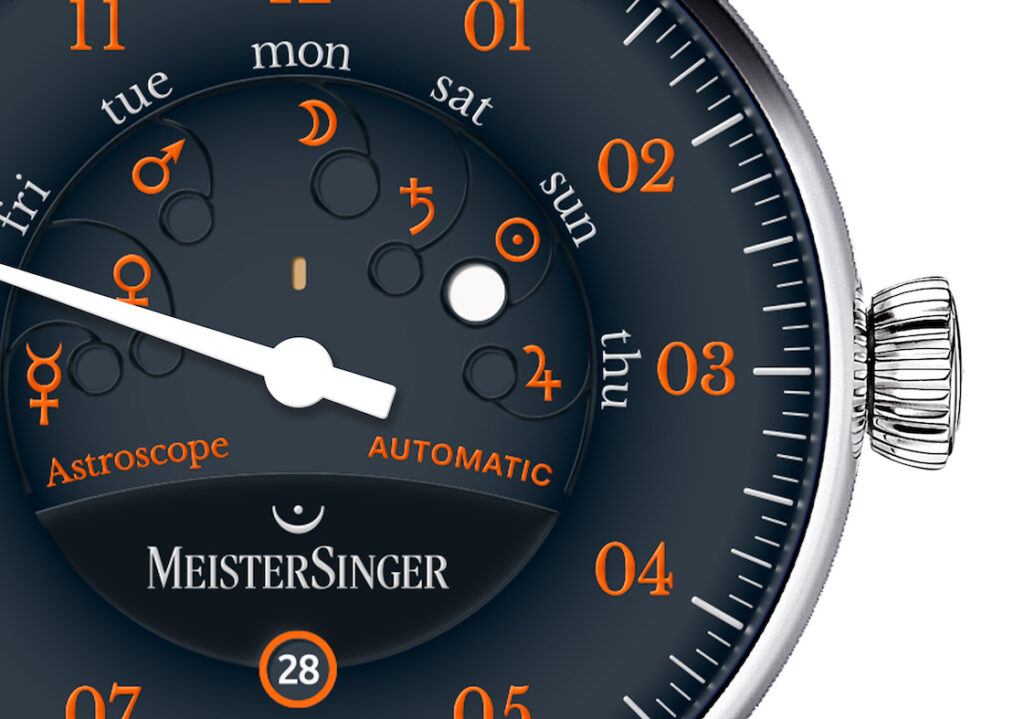 The unusual day display, as well as the single-hand time indicator and the date display, are powered by an automatic Sellita movement, which Meistersinger displays through a sapphire caseback. 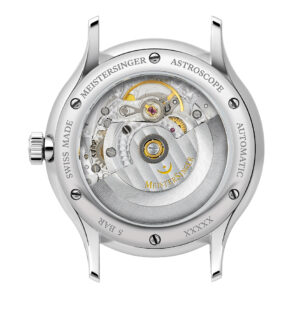 Meistersinger debuted the 40mm steel-cased Astroscope last year with a black or blue dial and white luminous markers. As noted, this newest edition, limited to 100 units, glows with orange markers and symbols atop a dégradé black dial. Even the calfskin strap is orange, nicely matching the dial accents.