Hegid watches are built around the concept of interchangeability. Buyers receive a capsule, the core of the watch itself, and can customize with different bezels and bands, changing the basic look of the watch while retaining the fundamental style.

In this second part of our interview with Hegid founders Henrick Gauche, Grégory Gauche and Emeric Delalandre, we learn more about the France-based brand’s design sense, it’s technical specifications and its plans for distribution in North America.

How does Hegid reflect a French design sensibility?

Hegid claims a French touch in high-end watchmaking. First, Hegid EVOL invention can be related to the freedom approach of fashion by enabling enthusiasts to complete their watch collection more frequently, for less investment. Watchmaking is also often associated with social status. Hegid’s customers express their independence through their watch creations. Hegid is proudly made in France, a singularity that stands out in watchmaking. France, which is the country of luxury, is unfortunately underrated in horology. Only the connoisseurs know that, more than being the country of freedom and of fashion (both being Hegid’s values), France is the home of some of the best artisans working for the most prestigious and unique brands of the industry.

It is with this savoir-faire, which recently joined the UNESCO cultural patrimony, that Hegid is producing its timepieces. Like every luxury creative brand, Hegid has an art director who manages all the brand’s public communications and prepares the future collaborations. Jerôme Coste was once the founder of the haute couture helmet brand Ruby, which allowed him to become a figure of the Parisian creative scene. He then collaborated with major designers in the international fashion industry. 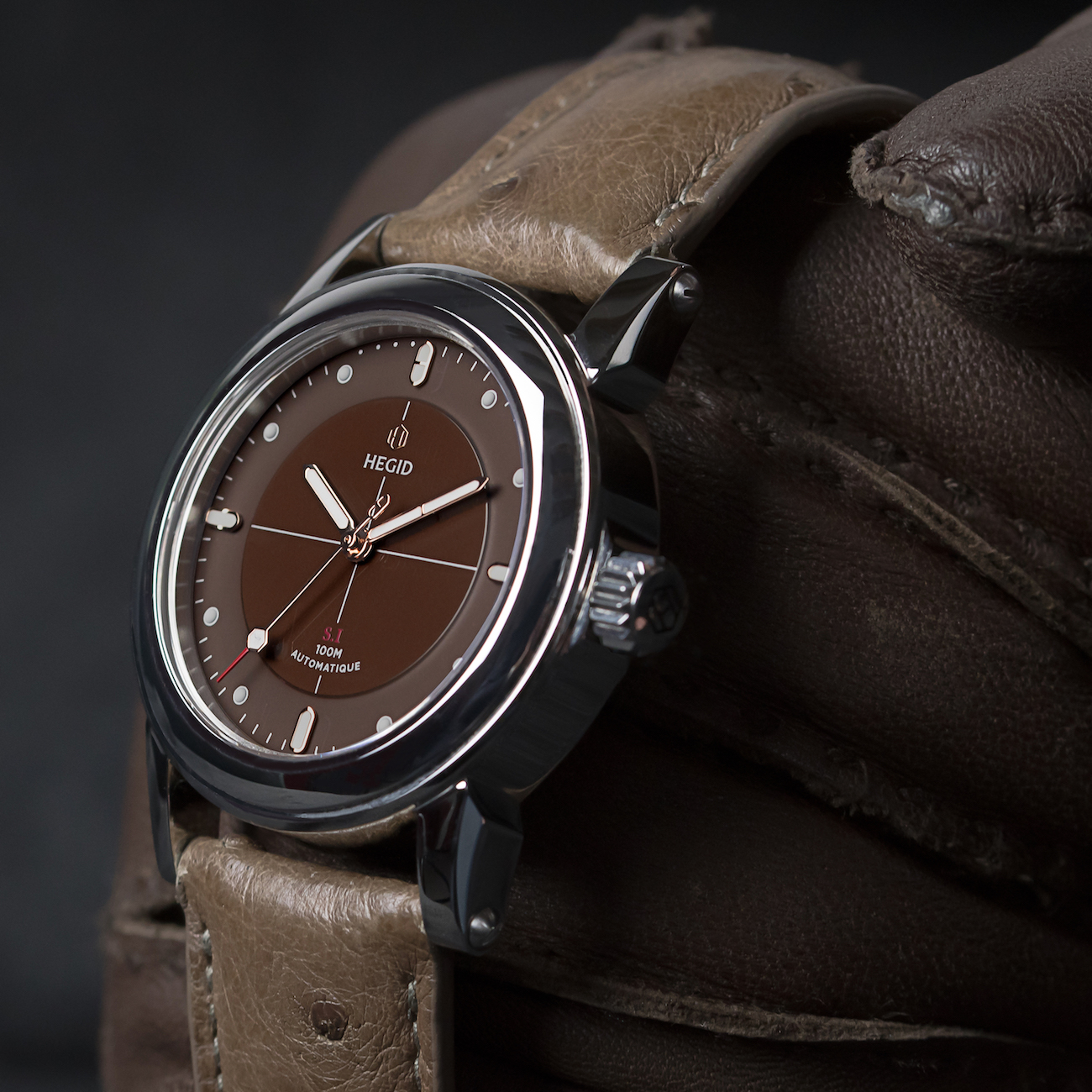 Hegid believes that creativity is essential to make a watch brand appealing in the long-term and that is why his role is key in the company’s decision-making process, which is not traditional in horology. “Make your evolution” is Hegid’s tagline. At a time when everything is changing, the Maison invites you to “Make your Evolution”. Make your Evolution, whether in your imagination or on the wrist.

Tell us about the movements.

On Hegid’s capsules, there are movements that we ask Sellita to specially produce for us. They are made in La Chaux-de-Fonds, at the French-Swiss border. They are SW200-H, based on their famous Top Grade model (the high-end finish of this line) with additional specifications that makes our movements different from the others. We decided to select only the very finest individual components to create the SW200-H for Hegid timepieces. Thus, the creation of the ultimate version of this caliber. Every brand using Sellita movements has its secret sauce. Hegid’s is to make them hard to unsettle and stronger to be more durable. Our movement can change in the future when we will bring more features but will always have the same durability-reparably dual approach.

In terms of specifications, our movements are delivered to our customers with a special and precise regulation.

All the setting operations are made by a renowned French expert watchmaking atelier in Morteau, in the Doubs area of France. Even if a lot of people tend to say that Sellita can be less than ideal, we want to claim that Sellita’s movement are globally awesome, very qualitative and reliable if you choose the high finishes and new movements. This needs to be highlighted.

Sellita has existed for years, and some of the most prestigious brands use their base-movement in their new watches.

Last but not least, Hegid’s promise being the durability for customers, we had to choose a movement that was both reliable and easy to be serviced or repaired by most qualified watchmakers all around the world. 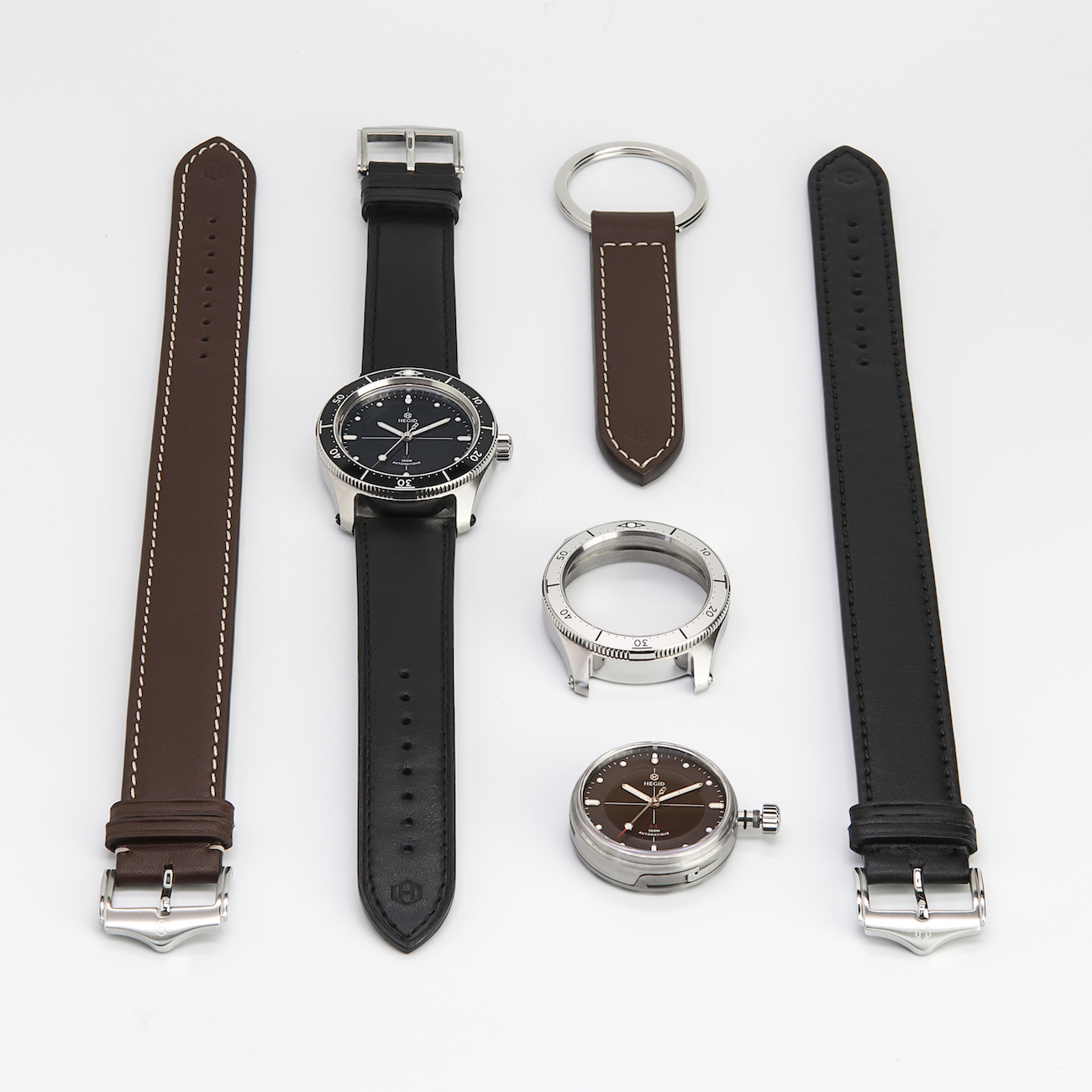 Sellita being independent, they can deliver parts to every registered watchmaker on demand. This makes a big difference at a time when, for most brands, you must go to their after-sale service, and then they send the watches to the global after-sales service center, and you sometimes wait several months for your watch.

This helped us to choose Sellita instead of ETA. ETA, as a part of the Swatch Group, with the ComCo affair, will be obliged to stop the delivery of parts of their movements to companies outside of their group at some point, which means that our watches wouldn’t be repairable if Hegid doesn’t joint the Swatch group. We didn’t want this. The SW200-H movement made in collaboration with Sellita is therefore the best choice for our customers in terms of quality and durability.

Except the movement, the dial and the hands of the watches (which come from Switzerland) the rest of a Hegid timepiece (85%) is mostly made in France by cutting-edge artisans. From Paris to Morteau, the creativity and the rigor of artists, designers, manufacturers, and even French leather craftsmen (Sibra) proudly enable the manufacture of Hegid watches.

All of the brand’s collaborators are at the forefront of their respective arts, by operating in a respectful and sustainable way in their environment. The geographic proximity of production and regular monitoring of everyone’s work, allows Hegid to ensure the excellence of its timepieces. When it comes to high-end objects made to last for decades, there can be no concession in their manufacture. 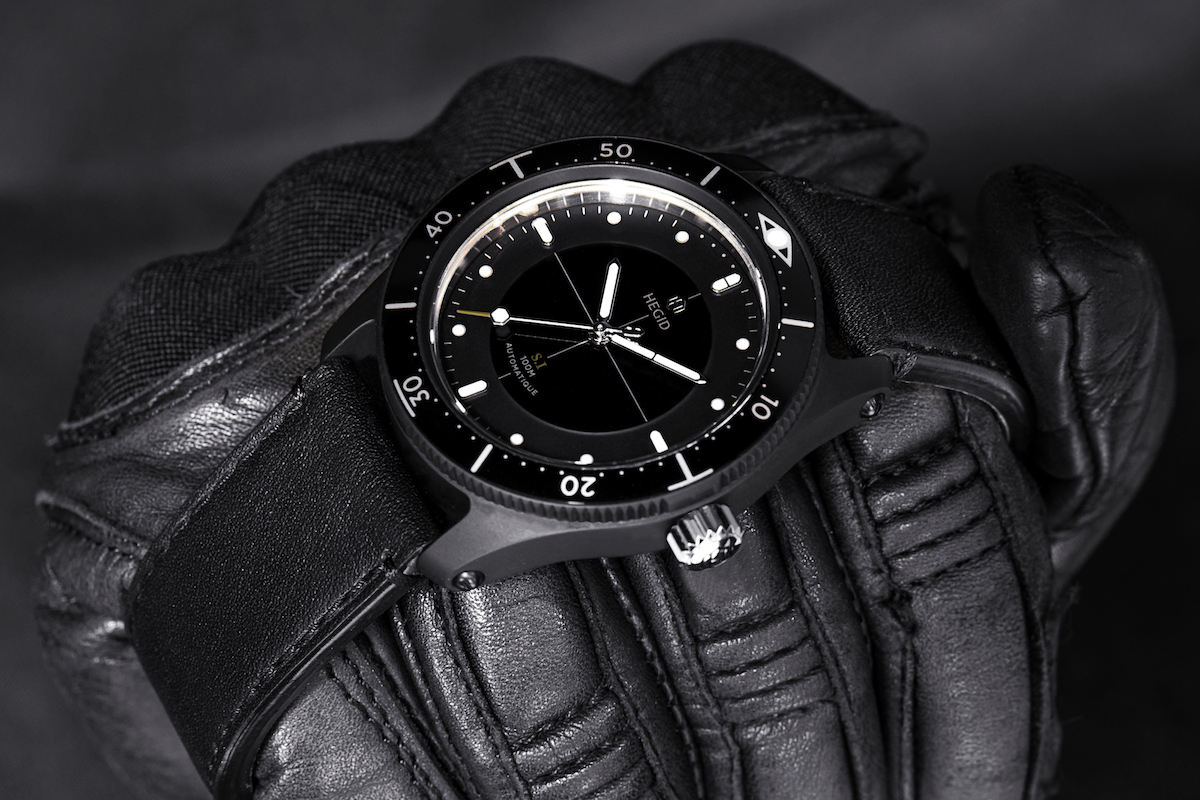 What’s in the works for line expansion and will there be any changes forthcoming?

The most diverse inspirations follow one another in the brand’s creations, which are released at the rhythm of the fashion seasons. Hegid seeks to regularly nurture the creative minds of its current and future customers. By offering the possibility of transforming its watch to always be in tune with the present moment, Hegid invites everyone to evolve more regularly. There will be new cases and new straps, some designed by Hegid, others in collaboration with artisans and brands.

Hegid is also developing accessories, which complete the brand universe of its wristwatches. In the pipeline, the current 34mm capsule will soon be the medium size of Hegid watches and will be complemented by another capsule that will be smaller and thinner small size. Later, a larger collection designed to allow more complications for the capsule should also arrive. All these lines will, of course, be equipped with the EVOL system and will continue to offer the possibility to evolve over time. How are you marketing these products?

Hegid is a global brand for the creative souls, inspired by the Artisans of Change (the new master craftsmen reinterpreting the traditional savoir-faire and the entrepreneurs exploring new virtuous models).

While most brands target a specific audience (diving, aviation, business, fashion enthusiasts, etc.), Hegid believes that anyone can mix and match elements from different influences in their very own way to create a unique watch for any occasion. The brand universe attracts individuals that embrace the future, that like to be unique, and who don’t need to be reassured by a logo or a recognizable model. 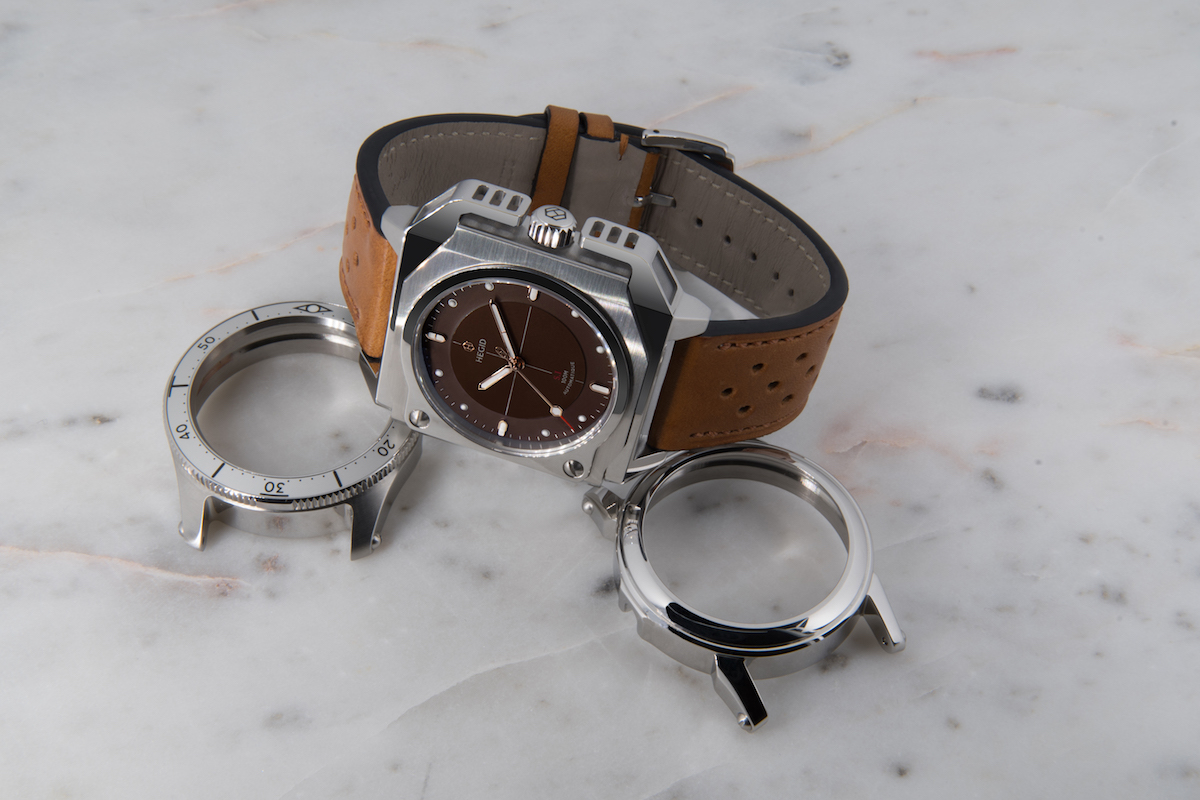 What are the plans regarding awareness and a dealer network in the United States?

Hegid already has hundreds of customers with a satisfactory rate of 94%, and the concept of recurring purchases allowed by the EVOL invention is being proved by the 1.8 cases and 2.4 straps purchased per year per capsule owner figures. As a result, some of the brand’s collections are already sold out.

Hegid convinced the most prestigious retailers of its local market and is distributed by leading stores like Printemps Haussmann or La Samaritaine (DFS) in Paris. The brand recently arrived in the United States, starting with Manfredi in Connecticut, and will continue to expand with cutting-edge watchmaking boutiques and department stores throughout the Americas in the coming months. The French, Swiss and American press considers Hegid as one of the most promising brands of the future. The Hegid team is experiencing growth to facilitate the coming exciting projects and products.

Liken this watch to others in the space – why is it unique?

Hegid stands for a creative, durable and evolutionary approach of horology by offering watches with fine automatic movements that will last for decades. The designs can be changed in seconds with only two fingers. With the EVOL system, consumers don’t need to change of watch anymore, they just need a new case or strap to have a new style on their wrists. Additionally, the entire team behind Hegid is dedicated and has the long-term vision to implement a new standard in high-end watchmaking: the modular watch. 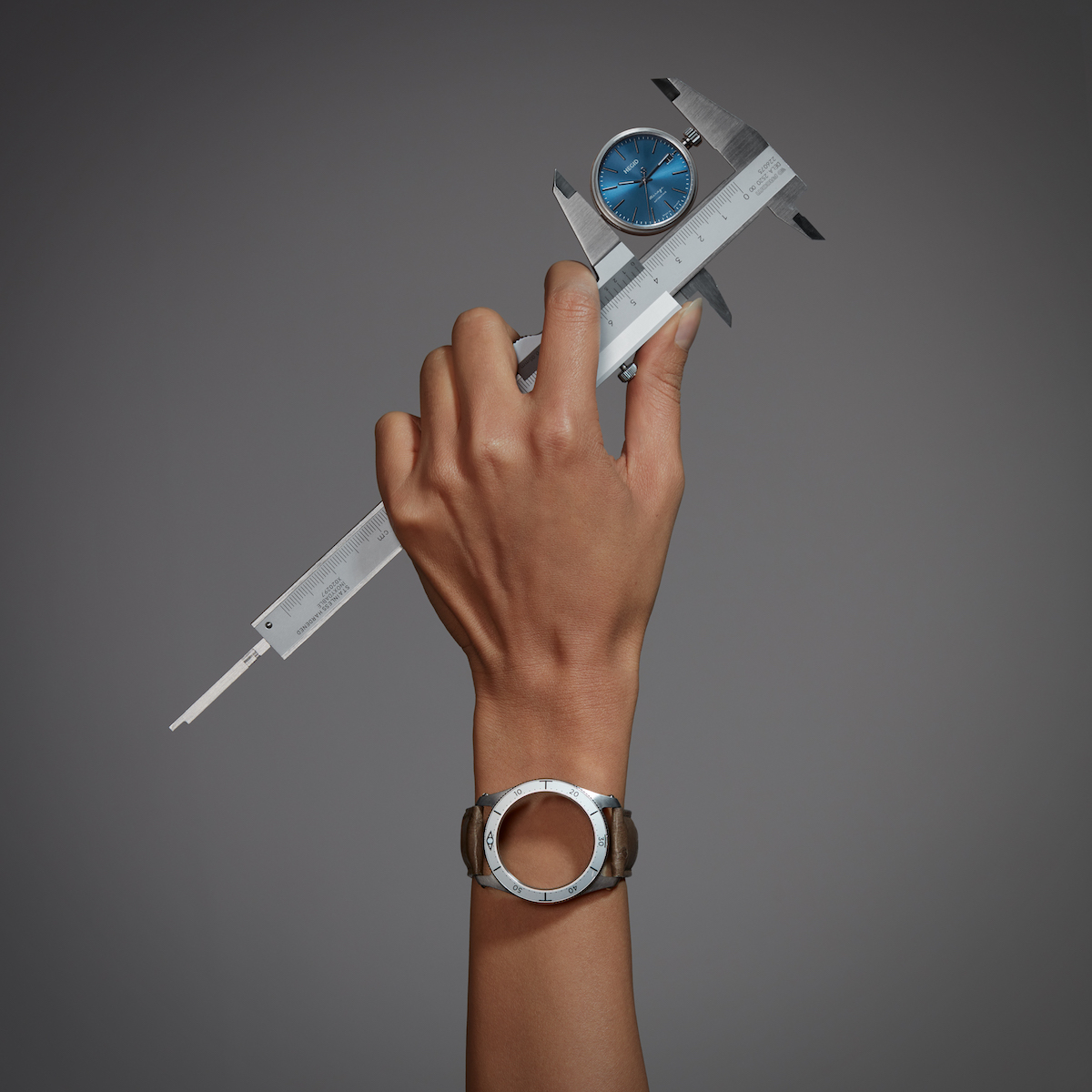 If this watch had a brand ambassador who would that person be?

Usually, a brand ambassador reflects the target consumer of the brand. Hegid is not exclusive in its customer approach, so it is a hard question for which we do not have the answer.

The early adopters of the Maison’s products are the young generation (twenty to fifty years old) of luxury consumers, looking for more creative styles and an intelligent acquisition of mechanical watches. They love the traditional idea of the timepiece made to last for a lifetime and they appreciate the ability to change it whenever they desire. The fact that they are the architect of their individual daily styles make them consider Hegid at their timepiece of choice.

As mentioned before, Hegid is inspired by the Artisans of Change (the new master craftsmen reinterpreting the traditional savoir-faire and the entrepreneurs exploring new virtuous models) and will first collaborate with some of them, which will indirectly be the ambassadors of Hegid.

Again, who would the ultimate brand ambassador be?