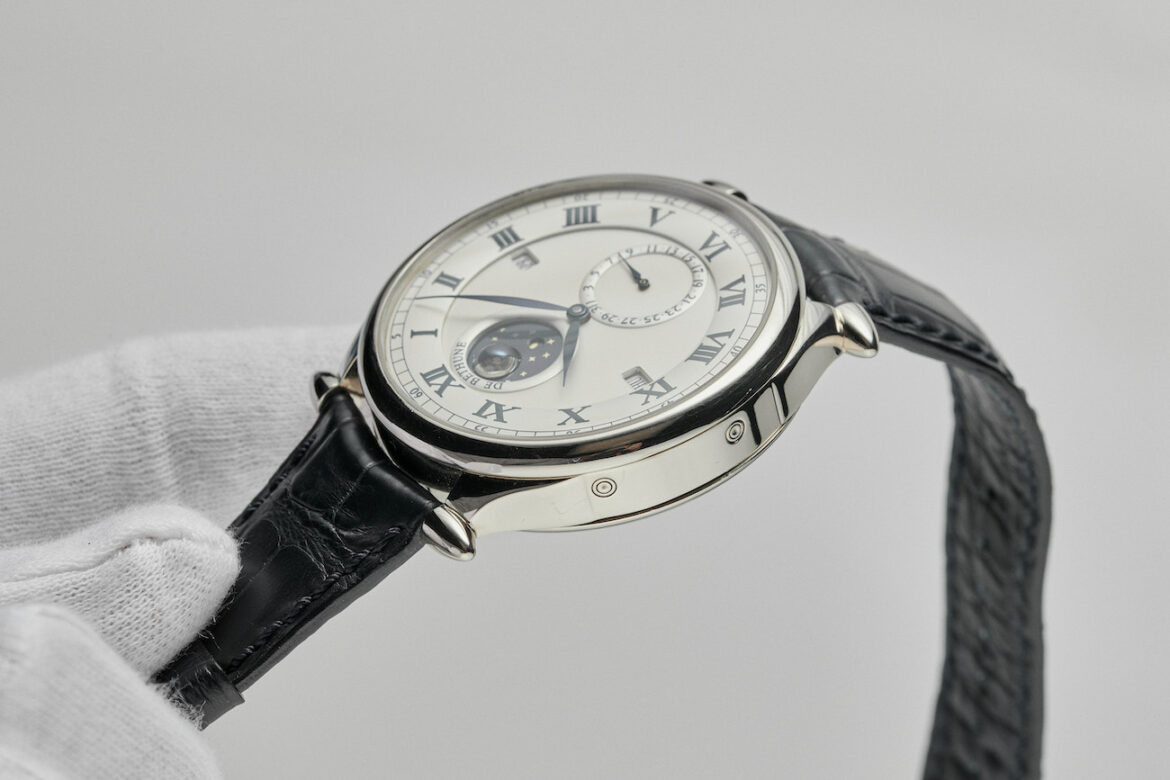 The upcoming auction is the second part of a series that began with the October 29 sale of watches with tourbillons and skeleton movements.

Here is a brief look at the auction’s top lots. 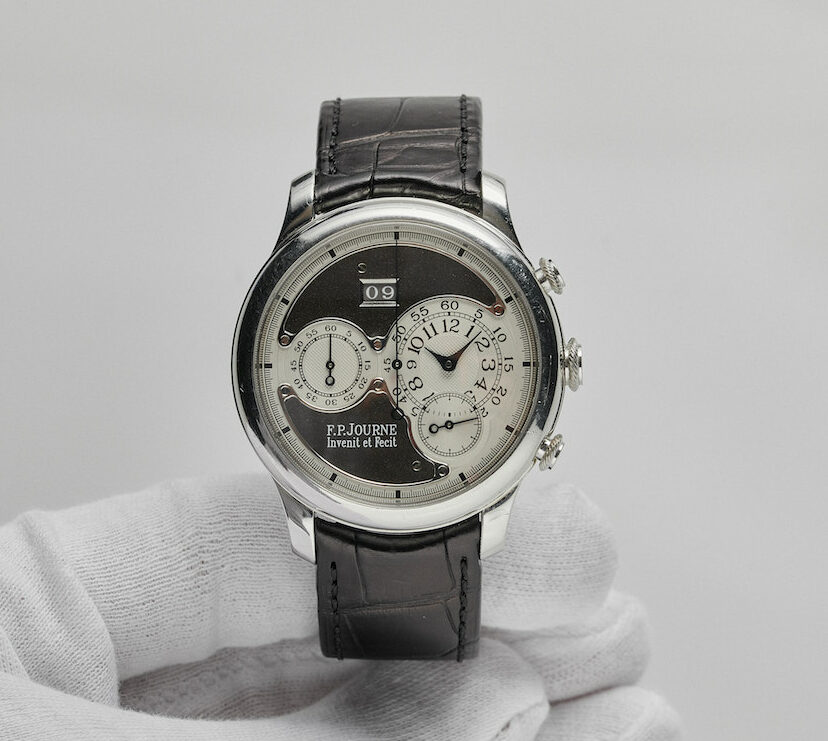 The F.P.Journe Octa Chrono 33/99-02C is a highly collectible chronograph limited to 99 pieces. It was launched with the Ruthénium Collection between 2001 and 2003. This was the first limited edition collection by F.P.Journe, who was one of the few watchmakers to have developed a wristwatch with its own interpretation of a classic chronograph complication. 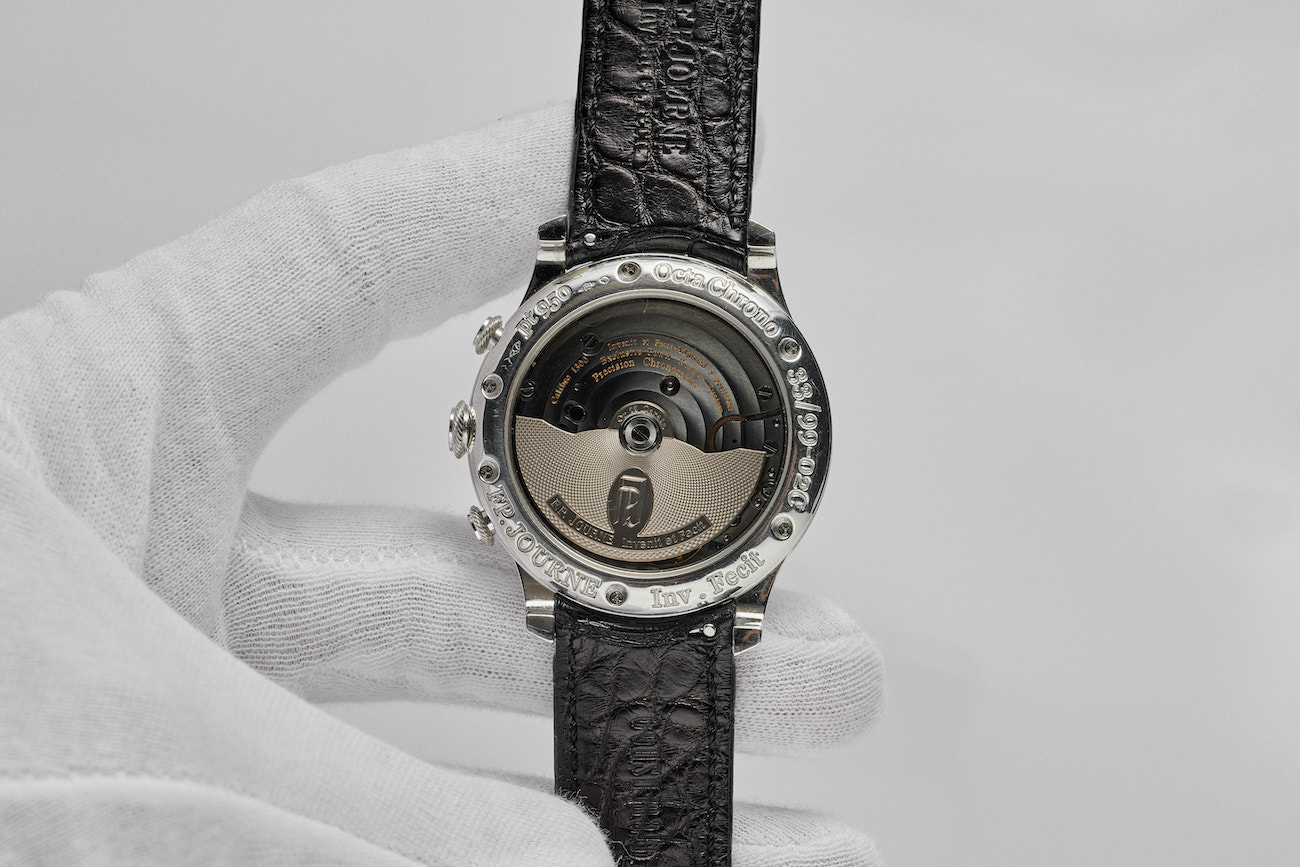 The watch completed the Swiss watch brand’s production of watches with movements traditionally made from brass with galvanic coatings. In this instance, he used a 40mm case for the first time, incorporating a thin, self-winding caliber 1300, mainplate and bridges in brass with dark grey ruthenium coating, gilt engravings, a rotor in 22-karat rose gold with grain d’orge guilloché pattern and a power reserve of up to 160 hours. Estimate: CHF 150,000-200,000. 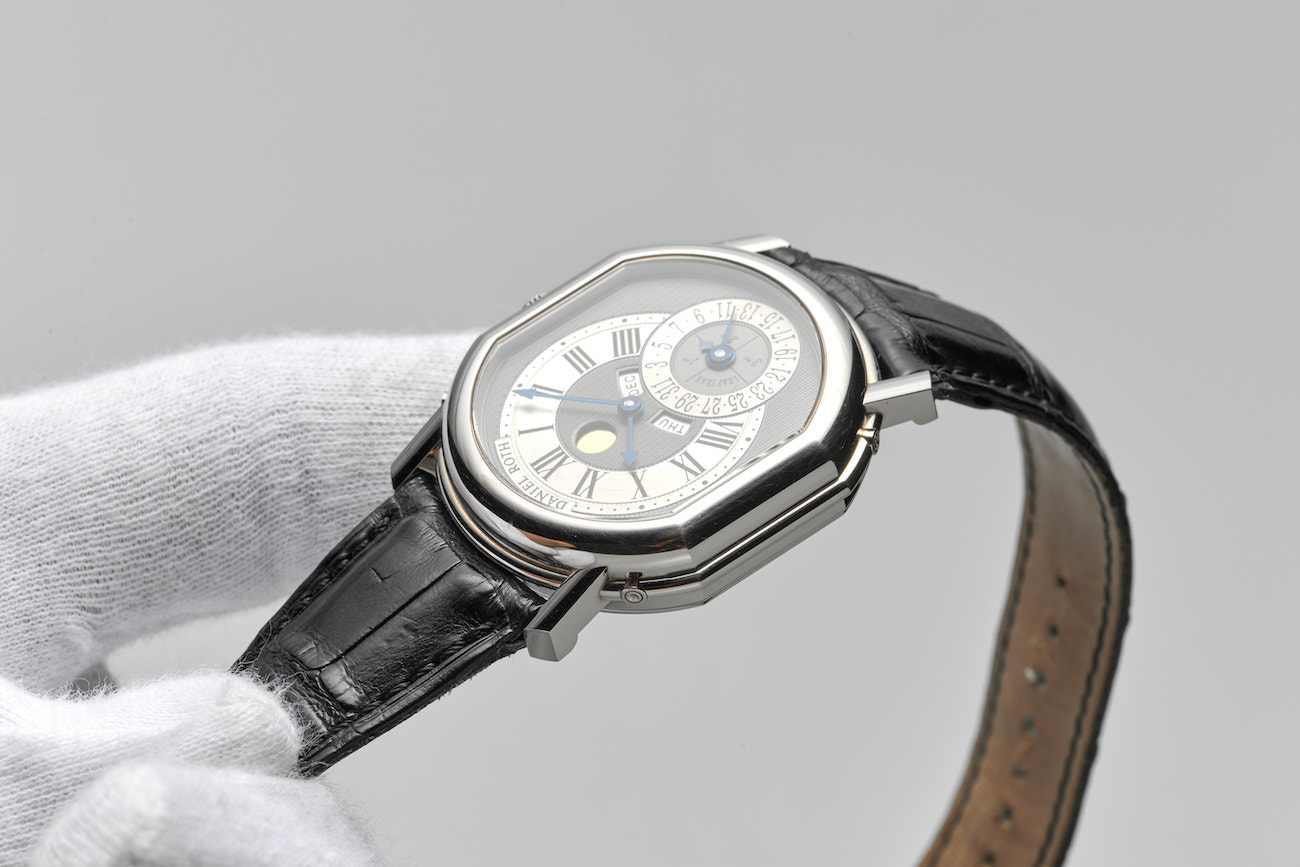 This numbered edition of a perpetual calendar is presented in a double ellipse- shaped case in 18-karat white gold, measuring 35mm x 38mm and 9.8mm.. Roth was the head watchmaker at Breguet for fifteen years, where he recreated the classic Breguet style and developed some iconic watches, including tourbillon, chronograph, perpetual calendar pieces, as well as Ref. 3130, inspired by Breguet’s pocket watch No. 5 of 1794. 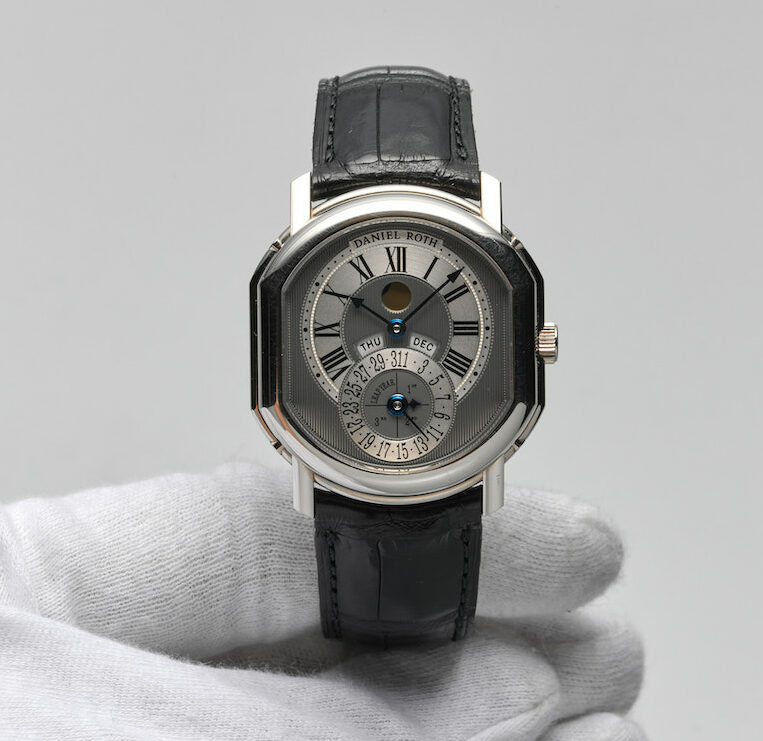 For his own brand, founded in 1989 and active until 2010, Roth developed a kind of late-20th century Breguet style with a double ellipse-shaped Ellipsocurvex case design, ruthenium-plated guilloché dials, and blued steel arrow hands. 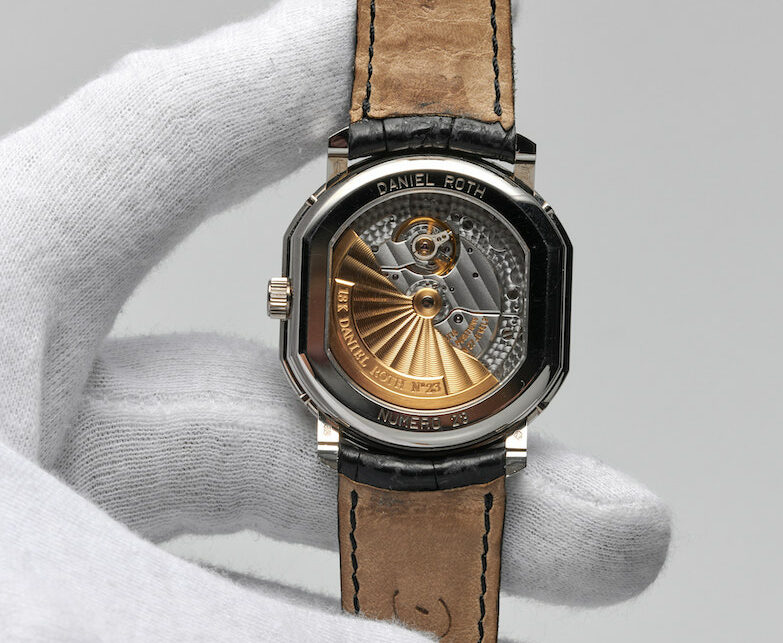 This lot offers a unique configuration of complications, a finely elaborated dial design, and haute horlogerie movement finishings. Seldom seen on the secondary market and believed to be very limited in production, available references do not seem to exceed serial number 39. The model belongs to a series of semi-instantaneous perpetual calendars powered by the self-winding caliber DR114 and does not have a moonphase display. This appeared later in a more complicated version of the watch. Estimate: CHF 20,000-25,000. 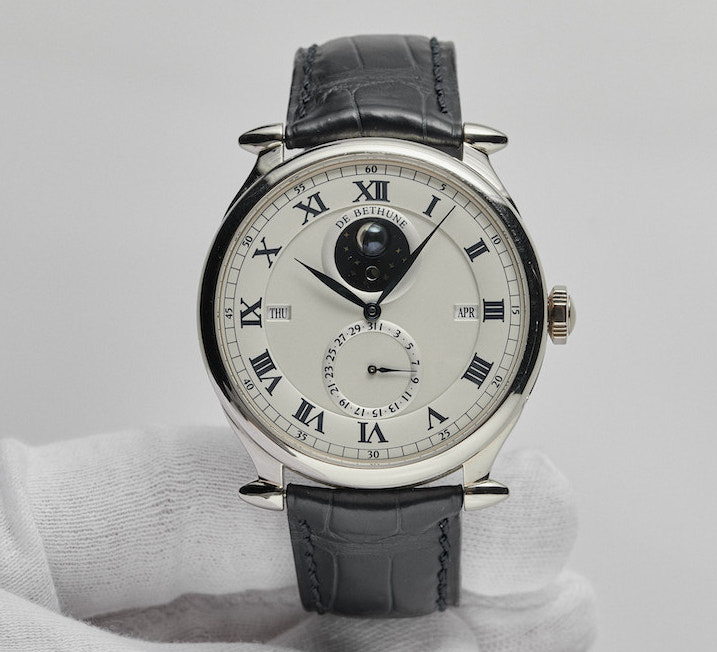 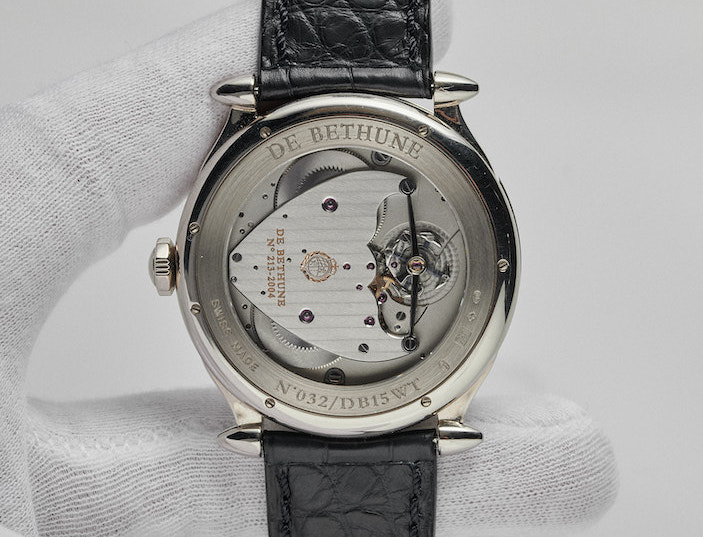 Inside is Caliber DB2004, a manual-winding movement with De Bethune patented 3-spoke titanium balance with platinum ogival weights, De Bethune patented self-compensating free sprung hairspring with a flat end-curve, double barrel, power reserve up to 5 days. Functions include indication of time in hours and minutes, perpetual calendar indicating date at 6 o’clock, days of the week in an aperture at 9 o’clock, months in an aperture at 3 o’clock and leap-year in an aperture at 12 o’clock, De Bethune spherical moonphase indicator at 12 o’clock.  This reference is discontinued, the present example in 18k white gold with a solid-gold silvered dial is one of only 45 pieces ever produced by the brand. 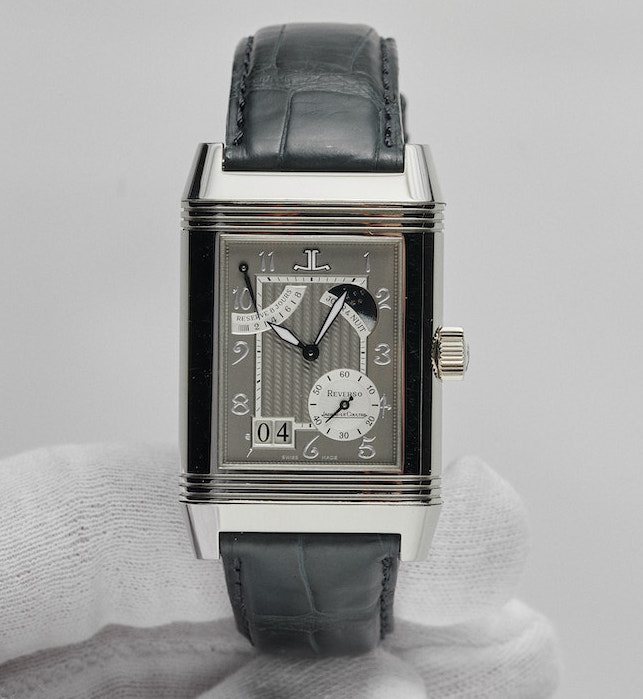 This unusual platinum complicated wristwatch was part of a limited collection launched to commemorate the 70th anniversary of the Reverso in 2002. Limited to 500 pieces, the watch tracks hours and minutes.

The platinum Reverso has been an exclusive offering of the brand since the early 2000s. Almost all of them are equipped with complicated calibers, often offering a unique set of complications, such as the present reference. It was the first Reverso to be powered by an eight-day caliber, to use white gold for producing the caliber’s mainplate and bridges, to have a large Reverso XGT-sized case in platinum, and to have a big date indicator. 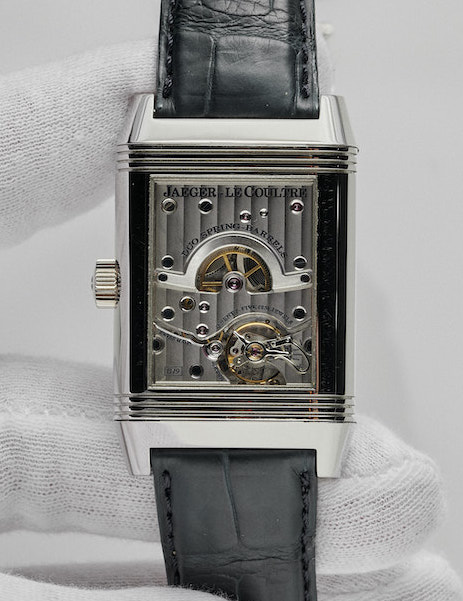 It is likely that this is the only one with a caliber that uses a swan neck index regulator. Caliber 879 was designed solely for two Reverso Septantième limited editions and is used nowhere else. 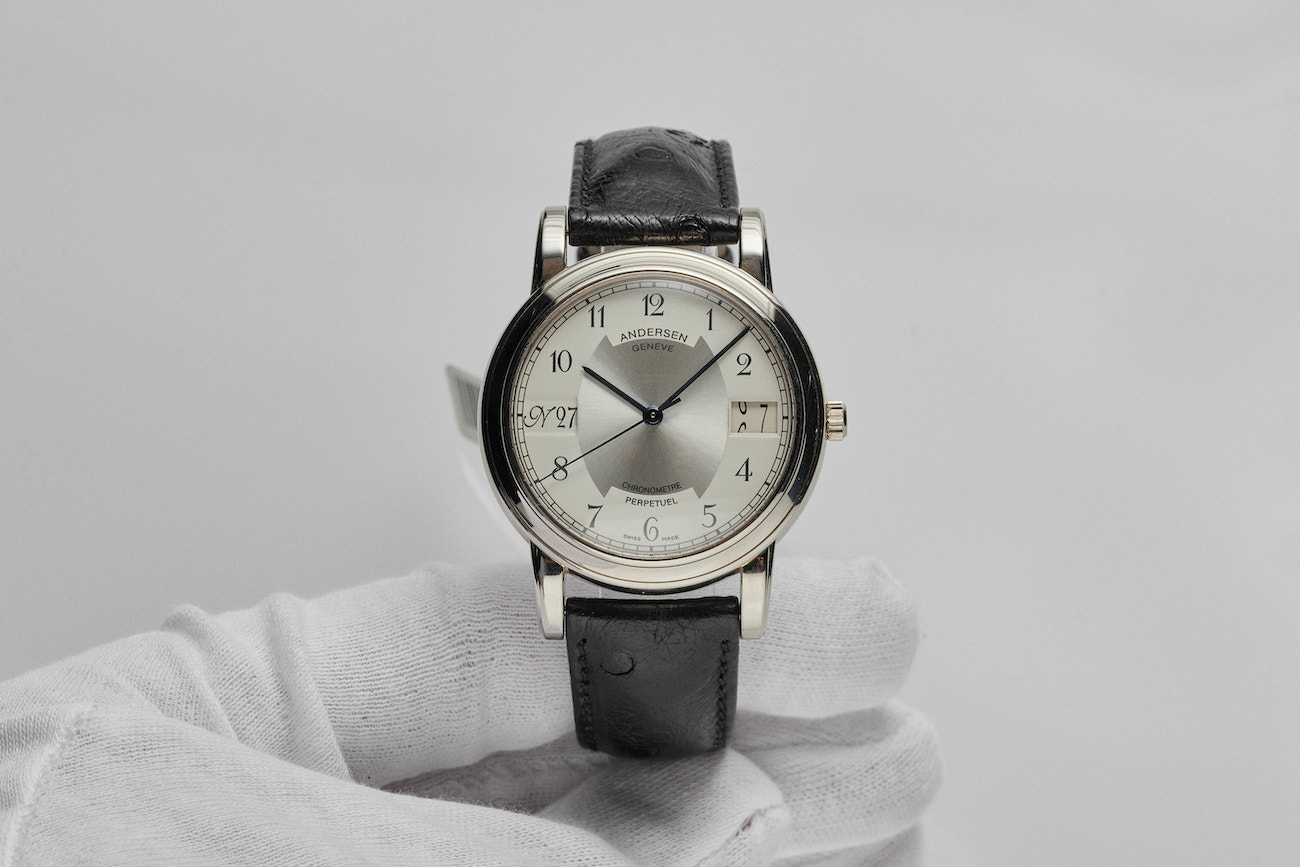 Svend Andersen was a founding father of the Academy of Independent Watchmakers (Académie Horlogère des Créateurs Indépendant, AHCI) in 1985. Prior to that, from 1969, he worked for nine years in the Atelier des Complications of Patek Philippe. 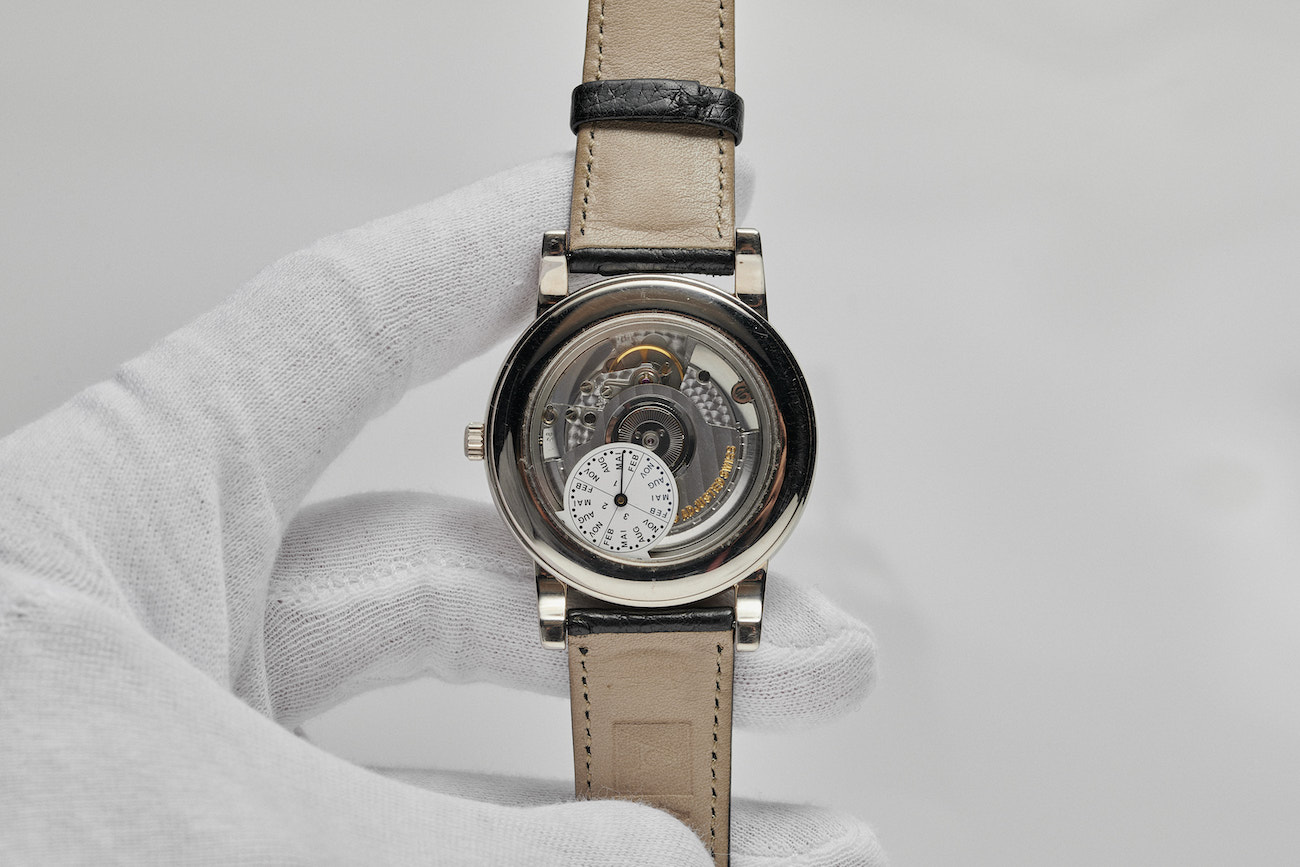 The Chronometre Perpetual was produced in very small quantities and rarely appears on the secondary market. A masterpiece of complicated mechanics and design, the Andersen Genève Chronometre Perpetual No. 27 represents one of the watchmaker’s extraordinary developments for the perpetual calendar, which is double-sided in this instance. He favored unexpected and paradoxical decisions, achieved by the contrast of this minimalist design with the apparent complexity of the perpetual calendar mechanism that has only a single date display on the dial.