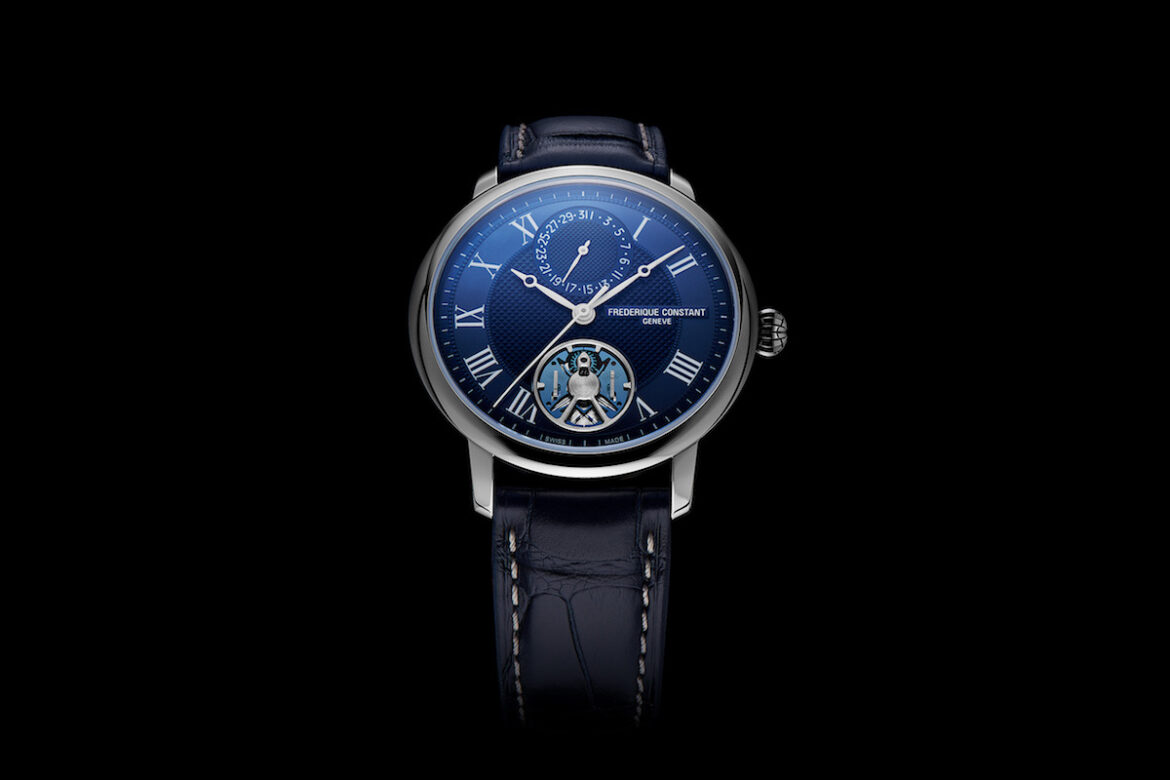 Debuted after three years of research and development, Geneva-based Frederique Constant’s new oscillator beats at the ultra-high rate of 288,000 vibrations per hour, or 40 Hz, about ten times faster than traditional mechanical movement oscillators. And since it is created as a single friction-free, anti-magnetic, lightweight component, both the oscillator and the movement demonstrate ultra high efficiency.

As a result, when teamed with a standard winding spring in the new movement, watches in the new Slimline Monolithic Manufacture collection realize a full eighty-hours of power reserve. 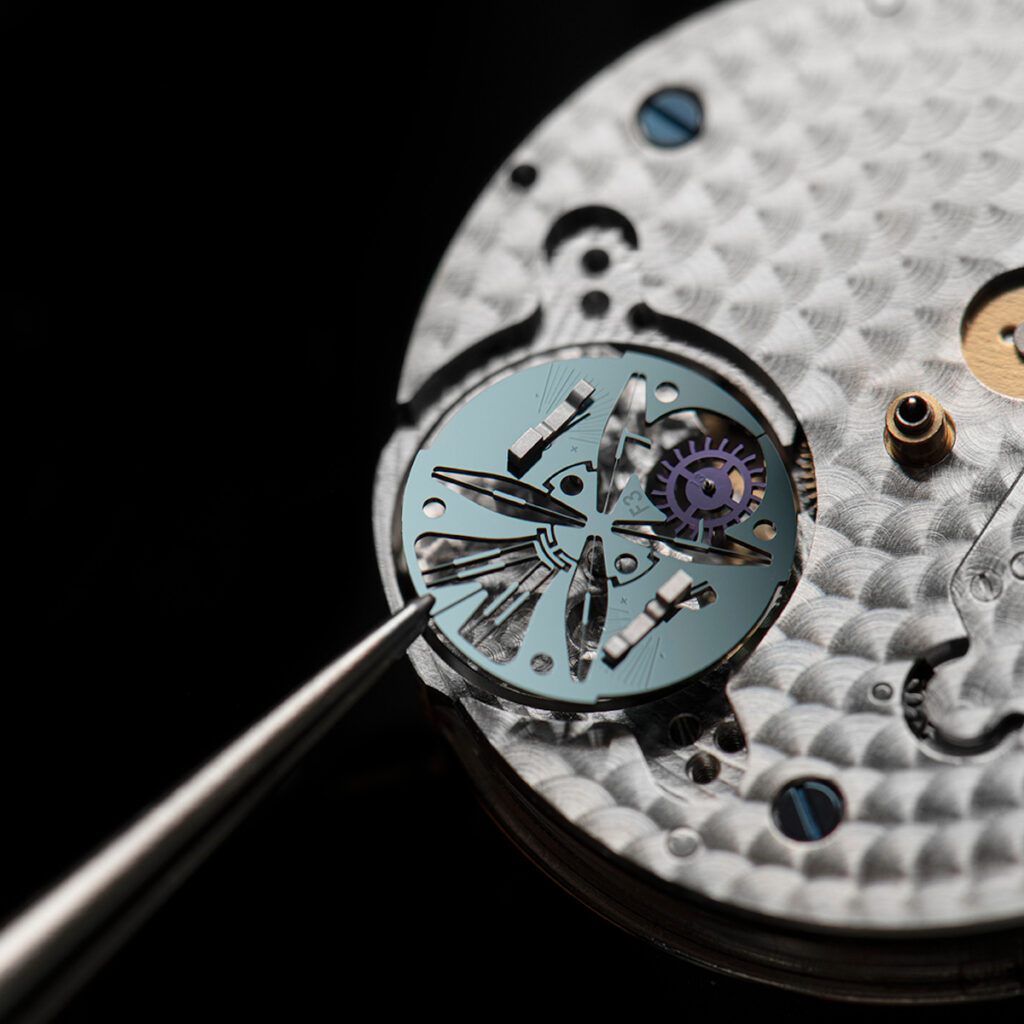 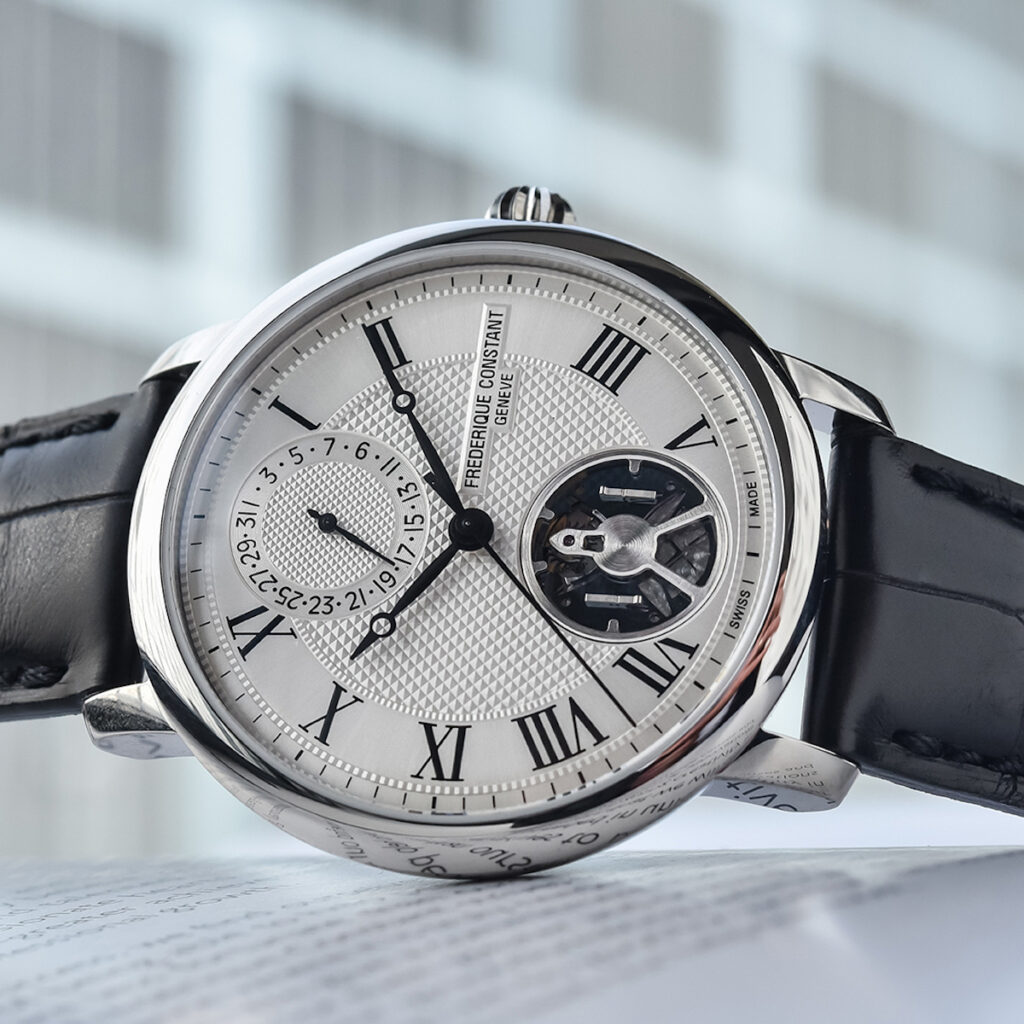 Flexous met the requests, devising a component that measures 9.8mm in diameter and 0.3mm thick, approximately the size of a conventional regulator. As noted above, the new oscillator incorporates all twenty-six components that make up the typical assortment, including the traditional balance, spring, anchor and rubies. And, echoing the traditional escapement, the new oscillator’s frequency can be fine-tuned by adjusting two tiny weights. 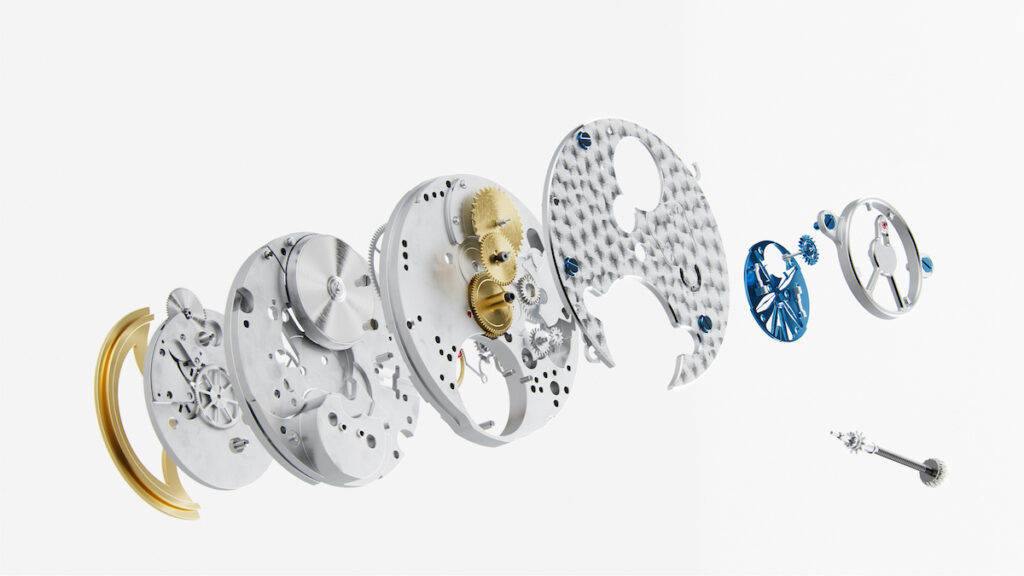 The first collection Frederique Constant is fitting with the new movement is the Slimline Monolithic Manufacture, a three-hand watch with a pointer date. The 40mm round watch offers a classic Swiss dress dial with a central guilloché hobnail pattern, printed Roman numerals and Breguet-style hands.

The design of the Slimline Monolithic Manufacture echoes the brand’s pioneering use of open dials that expose portions of the movement. When it debuted in 1994, the Frederique Constant Heart Beat was the only serially produced non-skeleton Swiss-made collection that boasted an open dial. 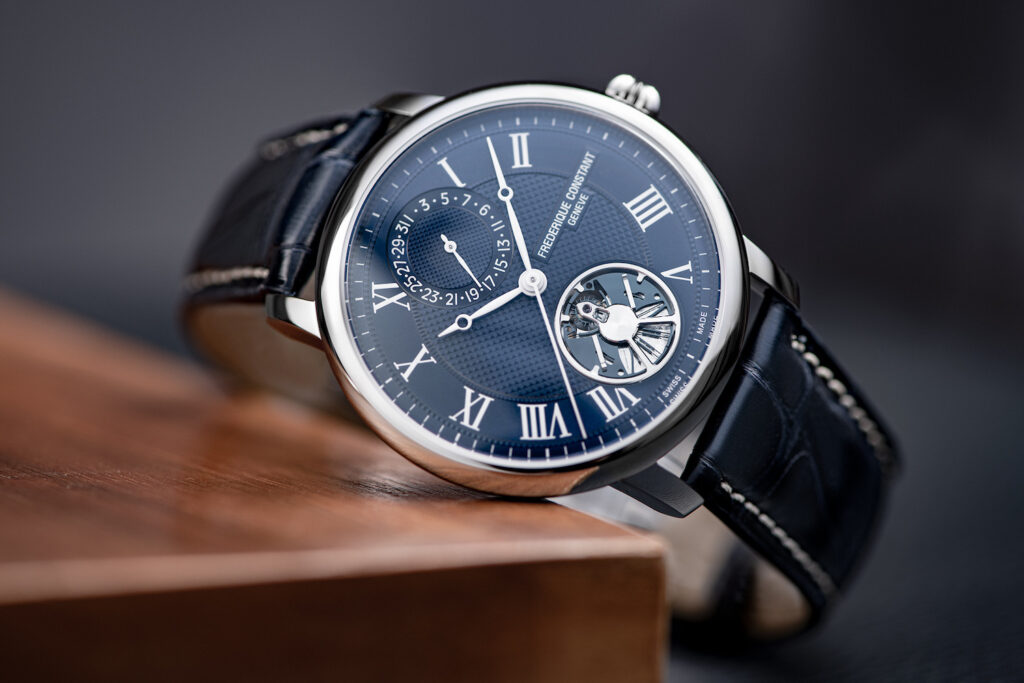 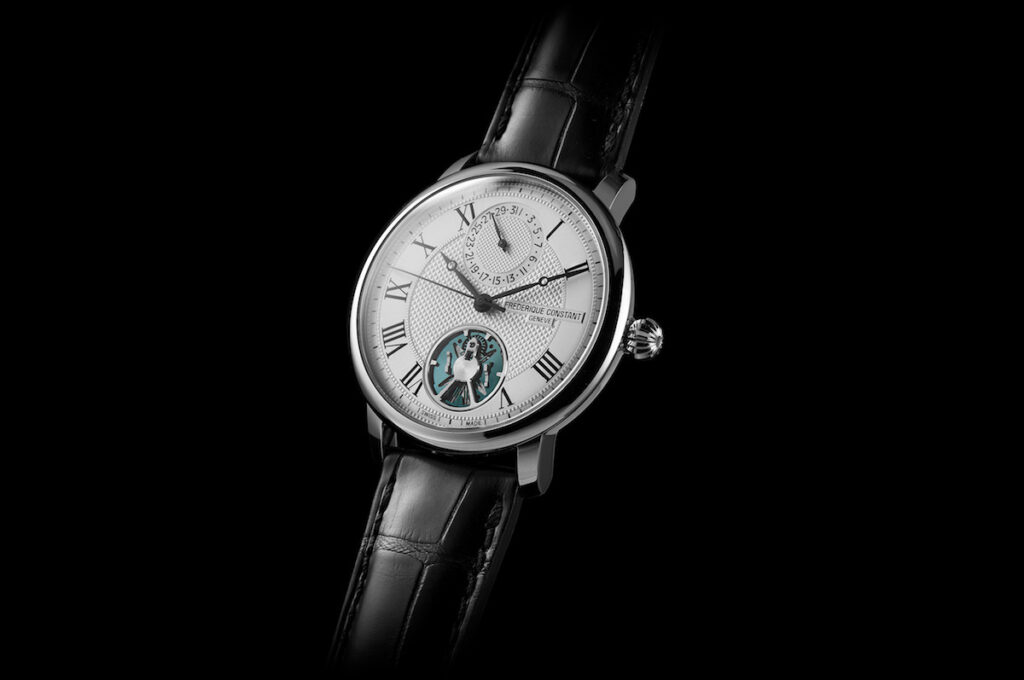 On the reverse side, a clear sapphire caseback offers an unimpeded view of the automatic FC-810 caliber, which is Frederique Constant’s thirtieth in-house movement. The brand decorates the movement with traditional Geneva stripes with perlage; the oscillating weight is open worked. 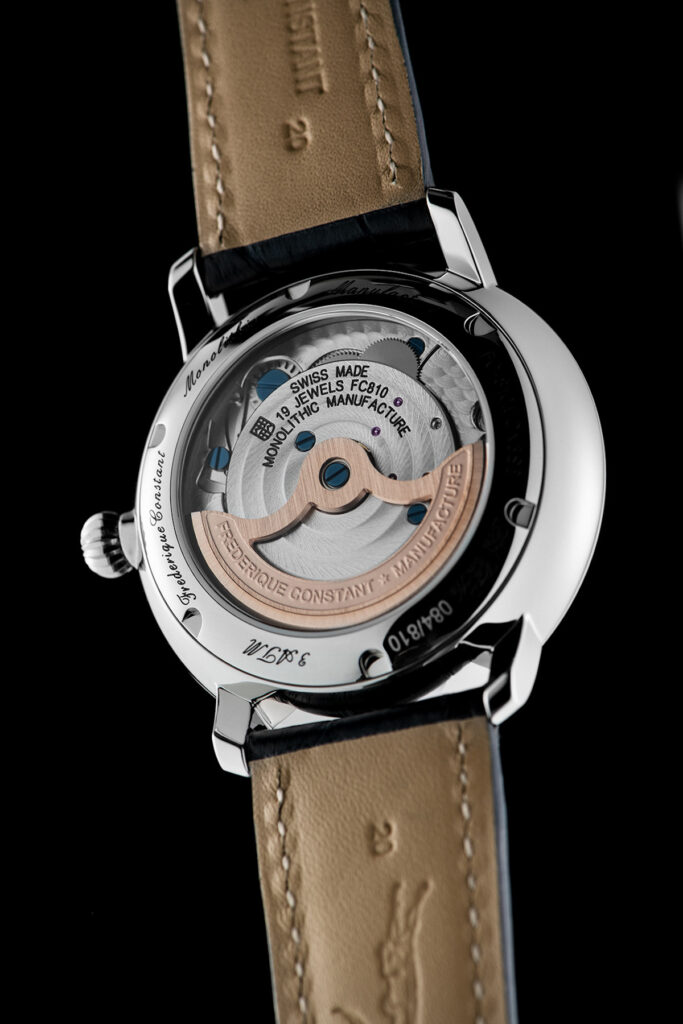 Frederique Constant will make the Slimline Monolithic Manufacture in three limited editions, projected to be shipped starting in September. The editions include 810 pieces in stainless steel with a blue dial ($4,795) and 810 pieces in a steel case with a silver color dial ($4,795). Also, an 18-karat gold model with a silver-colored dial will be made as a limited edition of 81 pieces ($15,995).