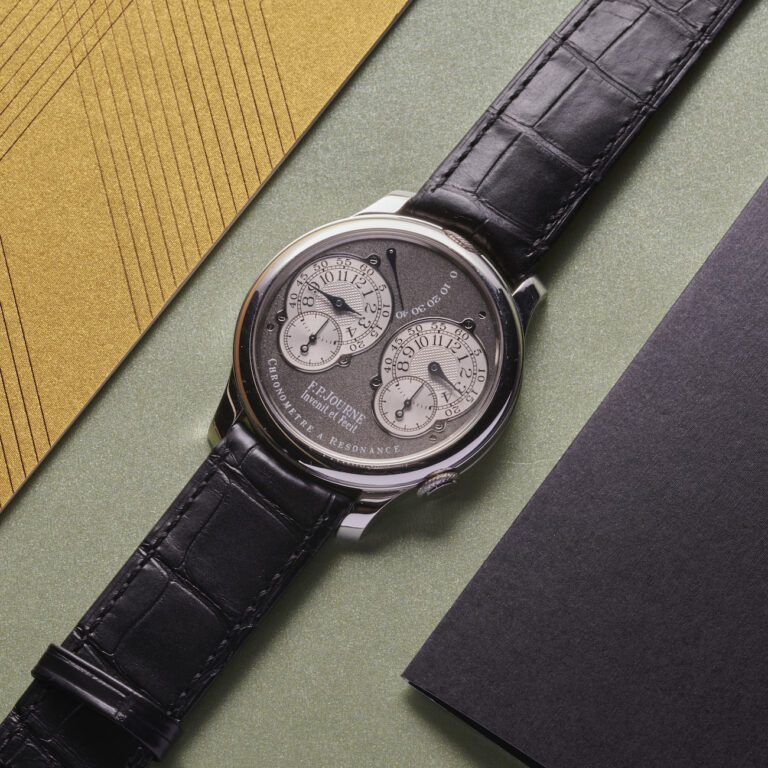 This F. P. Journe Chronomètre à Résonance Ruthenium is just one of the three rare watches made by pioneering independent watchmaker F.P. Journe set to be auctioned this weekend, November 20-21,  by Ineichen Auctioneers in Zurich.

The platinum watch, with an estimate between CHF 200,000 and CHF 250,000, was purchased in 2002 and features a solid gold dial with dark grey ruthenium coating and Journe’s famed hand-wound Résonance caliber 1499.3.

The auction, titled 17 Shades of Grey, will feature timepieces produced in tantalum, platinum and steel. Other watchmakers with watches in the auction include Audemars Piguet, Patek Philippe, Breguet, F.P. Journe, Vianney Halter, Konstantin Chaykin, and Urwerk.

After its primary auction of vintage watches and pocket watches, Ineichen will also host a second specialized auction called Alchemy of Gold that features wristwatches in yellow metals.

One highlight in this specialized auction is a set of twin Vianney Halter pieces. These are the Antiqua Yellow Gold and the Antiqua White Gold (each estimated at $53,800 to $107,600) which drew much collector attention when Halter revealed them in 1998.

These interpretations of the perpetual calendar allow the wearer to read the hour and minutes, month/ leap year, day of the week and the date via four riveted portholes in order of decreasing diameter.

Other highlights of Alchemy of Gold include watches from Audemars Piguet, A. Lange & Söhne, Patek Philippe, Girard-Perregaux, Tissot, Daniel Roth, and Vacheron Constantin.

Here is a look at a few highlights from the Ineichen Auctioneers auction this weekend.

The F. P. Journe Tourbillon Souverain Ruthenium Collection (estimate $107,600 to $215,150) is numbered and limited to 99 pieces. This one features the caliber 1498, the movement that helped the brand make its mark in watchmaking in 1999. No more than 520 Tourbillon Souverain watches were ever produced, and that includes those in the Ruthenium Collection.

This F. P. Journe Chronomètre Souverain de Boulle (estimate $53,800 to $107,600) is among the rarest versions of this model. At that time, only eight watches were supplied to the authorized Dallas retailer, de Boulle Diamond & Jewelry, in the US in 2007, with two more delivered for owner Denis de Boulle and a director. This piece belonged to the owner.

The Audemars Piguet Royal Oak Perpetual Calendar Ref. 25820TP (estimate $107,600 to $215,150) in platinum and tantalum is the rarest version of this model, which forms part of a limited edition of fifteen pieces. A characteristic feature is its design with a matte non-Tapisserie dial.

Also from Audemars Piguet is the Ref. 25720 from a collection that featured dials mostly decorated with a guilloché plate. Hand- engraved dials were less common, especially like this one in platinum, ranking this Audemars Piguet Star Wheel Automatic Ref. 25720PT (estimate $10,800 to $21,550) among the most rare of this kind. It was released in a limited edition of only nine pieces, which is indicated at the bottom of the dial (9/9).

Check out the Ineichen auctions here.