De Bethune marks the tenth anniversary of its DB28 by re-interpreting the 43mm titanium-cased, top-crown watch in three extra-thin versions. All three timepieces re-imagine the DB28 in slightly different ways, but all utilize a new, thinner case with newly designed – but still floating – lugs.

One of the three celebratory DB28XP debuts flouts a highly polished example of the new ultra-thin case with the prominent De Bethune delta mainplate, one presents a De Bethune Starry Sky design on its dial and the third is equipped with a De Bethune ultra-light tourbillon set in a stunning hand-engraved “barley grain” guilloche pattern. 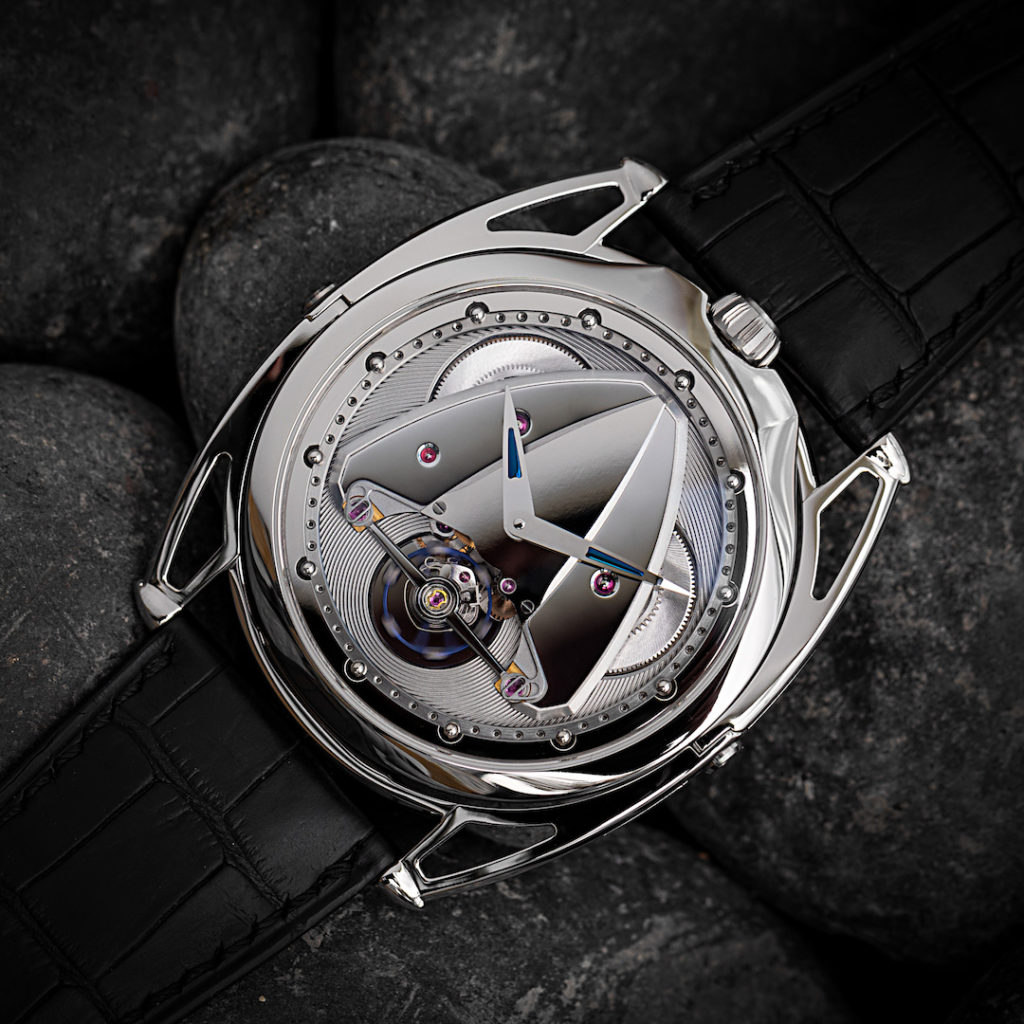 To create this ultra-thin (measuring 7.2mm compared to 9.3mm in previous models) evolution of the DB28, De Bethune re-designed the case, lugs and the case band, adding a more pronounced curvature. 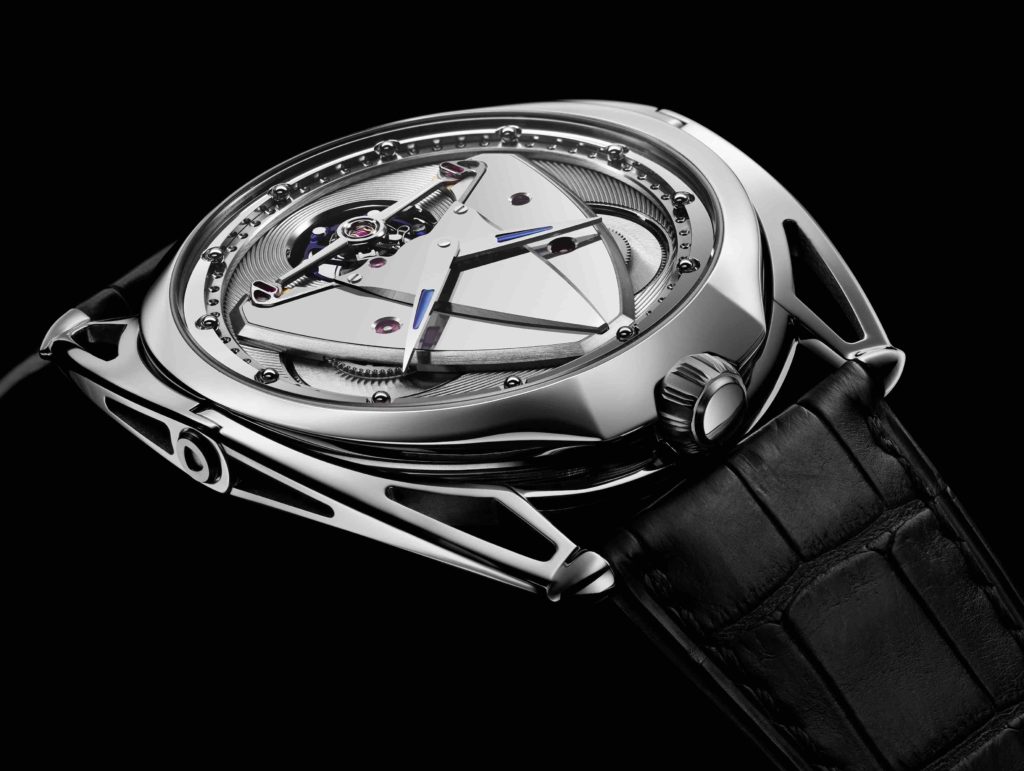 New finishing needed to reflect the new, thinner profile, according to De Bethune, which is why the new model features highly polished titanium bridges and satin-finished bevels, a visual treat that enhances the thinness of the new watch. Likewise, De Bethune mirror-finishes the emblematic delta-shaped mainplate and with its dial offers a modern take on traditional guilloche technique.

De Bethune of course fits the watch with its own balance-spring with a flat terminal curve, silicon escape wheel and De Bethune triple pare-chute shock-absorbing system. De Bethune has also increased the efficiency (by twenty percent) of its self-regulating twin-barrels to ensure that the hand-wound movement delivers a full six days of power reserve. 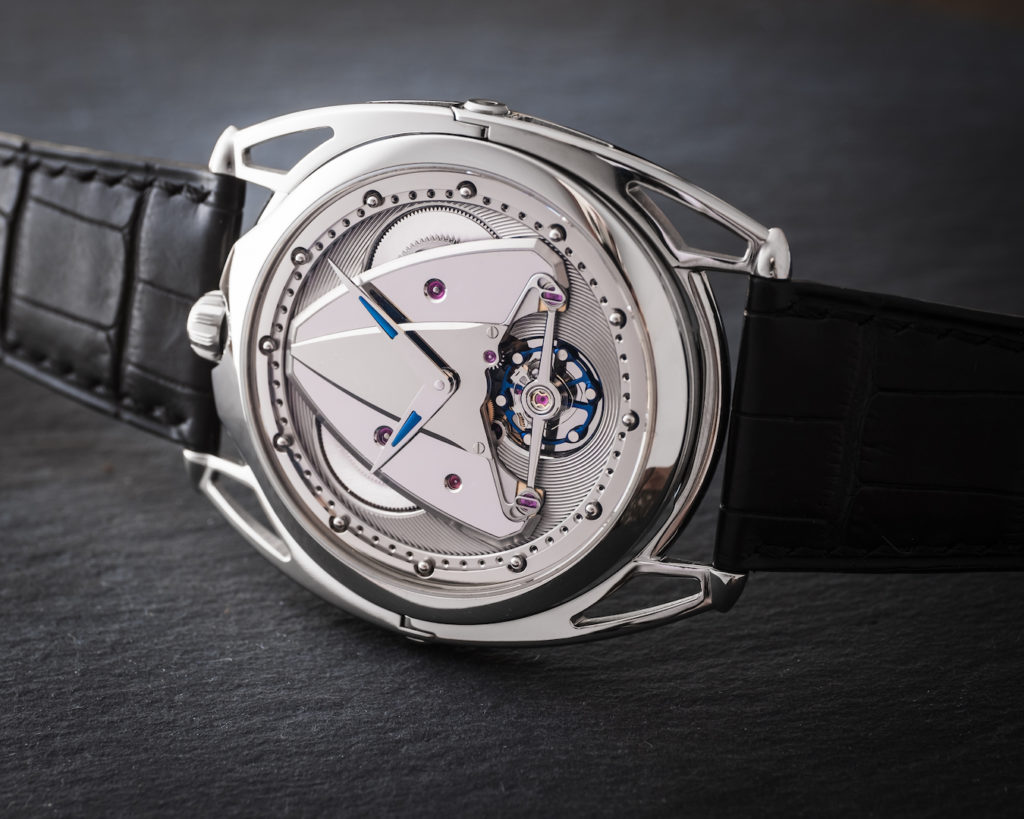 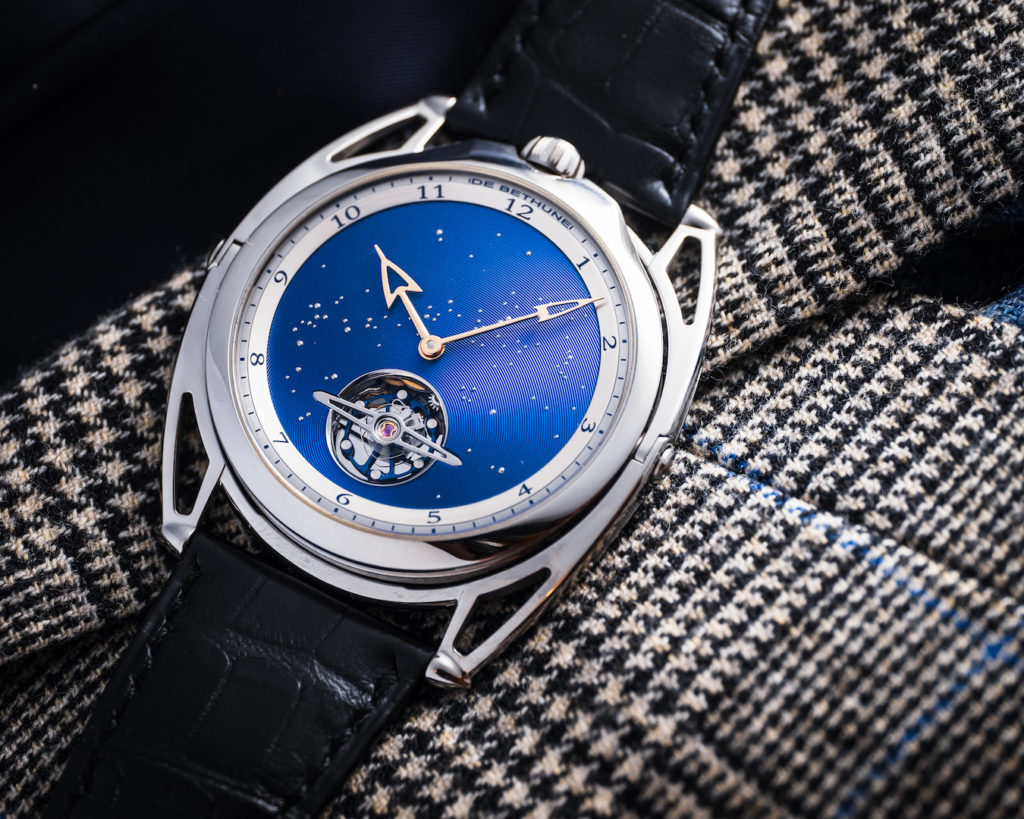 Here, De Bethune creates its first-ever blued Microlight dial, comprised of a blue titanium base with applied microgrooves, to deliver a celestial dial show. Those ‘stars’ on the dial are actually white gold pins placed with precision and as requested by the customer. 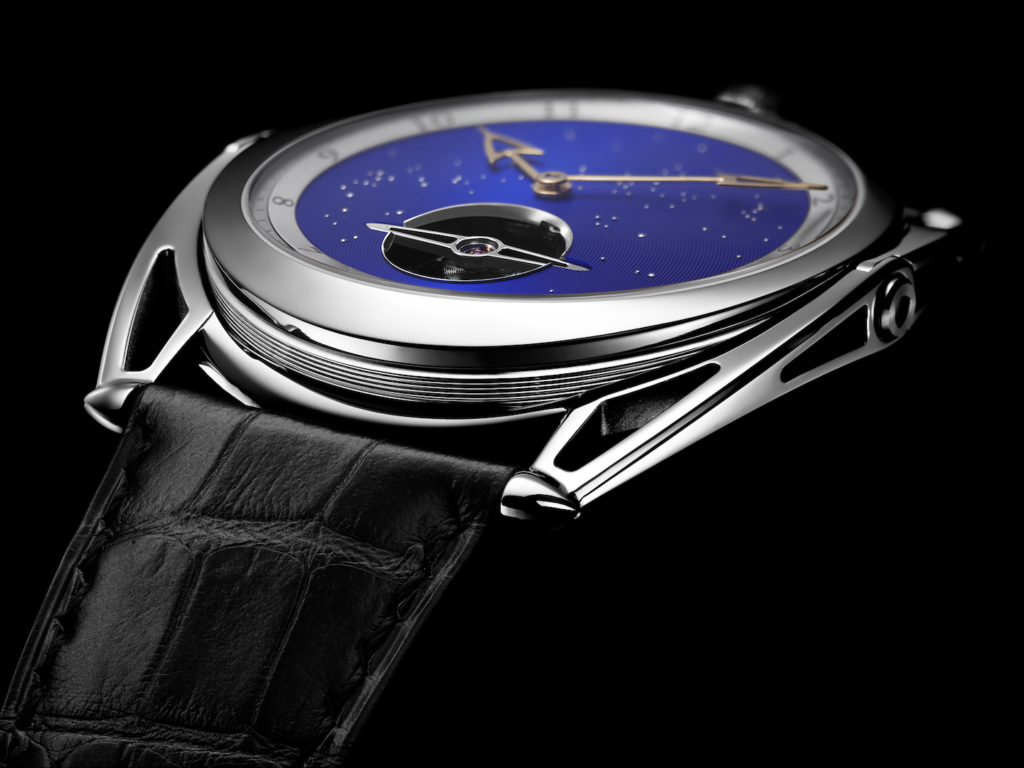 As you may know, De Bethune allows the customer to select a date, hour and location so that it can create a night sky exactly as desired by the watch’s owner.

The DB28XP Starry Sky features the hour circle in silver, the minutes in Arabic numerals, the De Bethune signature at 12 o’clock and rose gold hands designed especially for the new watch. 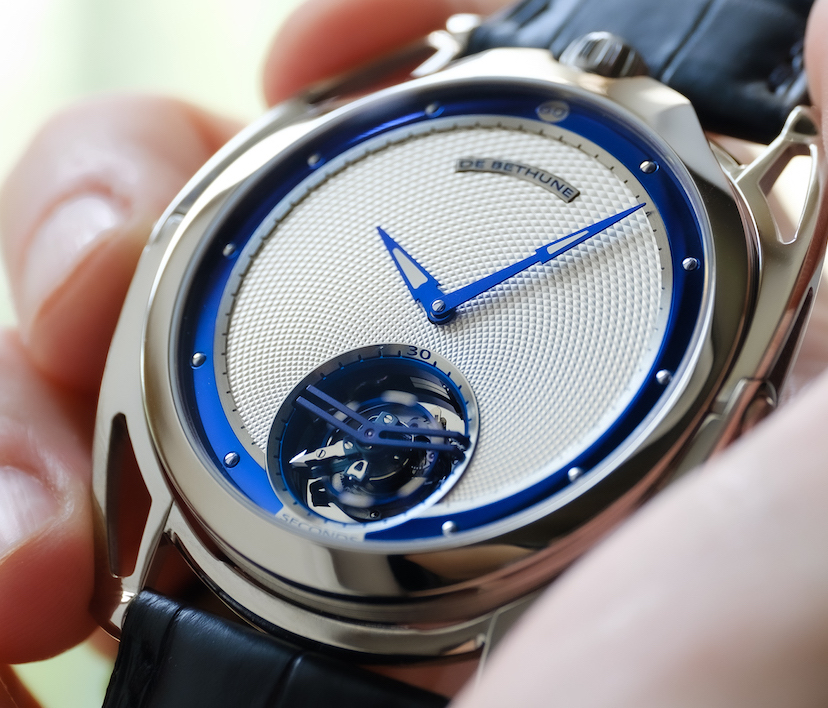 With this third interpretation of the DB28 theme, De Bethune rearranges the movement’s architecture by placing an exceedingly lightweight (0.18 grams-which De Bethune calls “the lightest ever”) 30-second, 36,000-bph tourbillon at 6 o’clock. De Bethune notes that the dial of the DB28 Digitale inspired the new design. 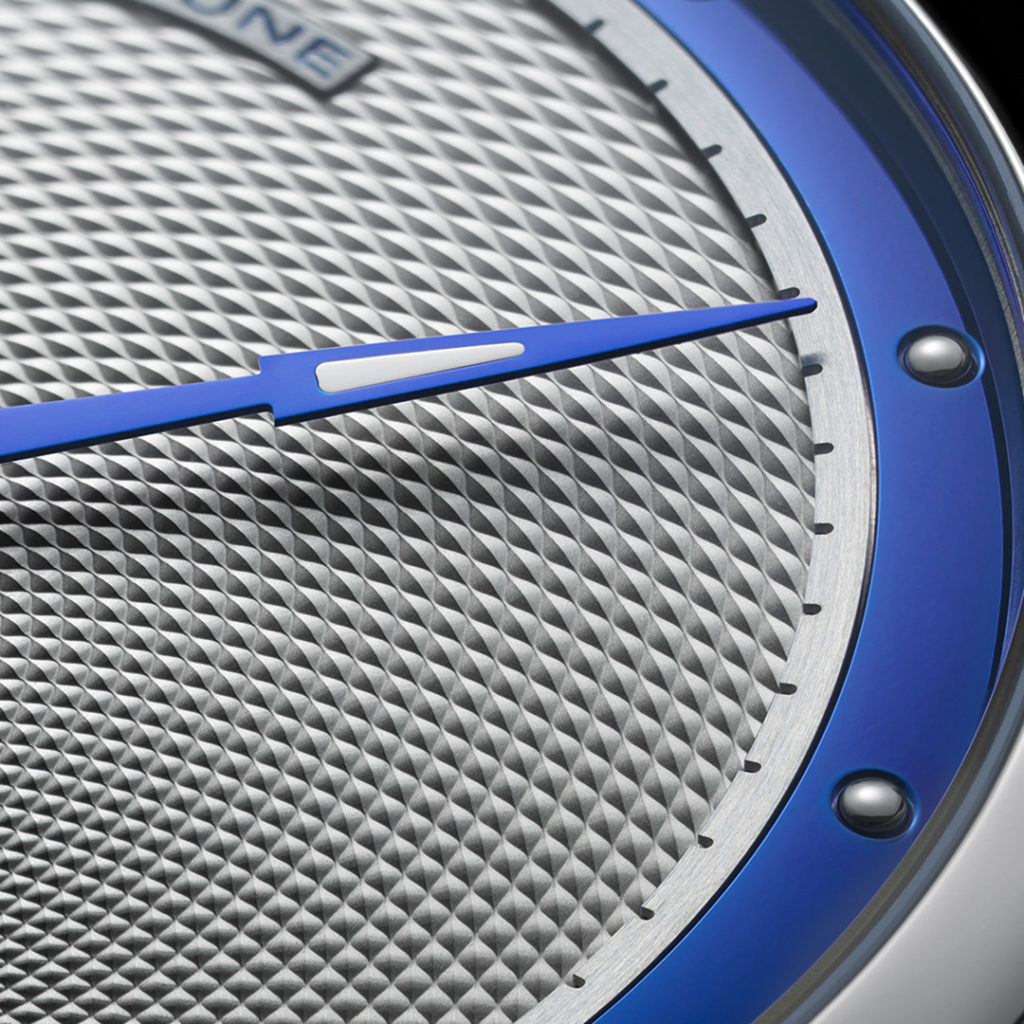 If you can bear to turn the watch to its caseback, there’s another reward to viewing the DB28XP Tourbillon: a representation of our solar system that references the Aiguille d’Or – the highest distinction of the Grand Prix d’Horlogerie de Genève (GPHG) – awarded to the first DB28. The position of the planets is that of the evening sky over Geneva when the prize was presented on November 19, 2011.

From Dash to Wrist