Citizen has updated and expanded its Series 8 collection, a popularly priced set of sporty steel watches previously sold only in Japan, and will offer them in the U.S. market.

While Citizen has a long history as a manufacturer of mechanical movements, the company in recent years has focused much of its marketing and distribution efforts on its light-powered Eco-Drive technology. For U.S. buyers, Citizen’s Miyota mechanical movements are more likely found powering watches made elsewhere than within Citizen’s current U.S. lineup. For instance, Bulova, owned by Citizen, and many independent bands utilize Citizen-manufactured automatic movements.

Look for Citizen to draw new attention to its own extensive history as a manufacturer of mechanical watches as it launches Series 8 and The Citizen within the United States.

Citizen will offer two models within Series 8 this fall. One, the 870 Mechanical, is a sporty round watch with a two-part bezel, which sets it apart from the second model, the 831 Mechanical, which features an octagonal case and one-piece bezel.

The 870’s case is finished using both hairline and mirror finishes, and its dial is set with larger hands and markers than the 831 models. As a result, it’s the cleanest of the new Series 8 designs, with a focus on high visibility and casual sportiness, especially with its steel bracelet integrated directly into the steel case. 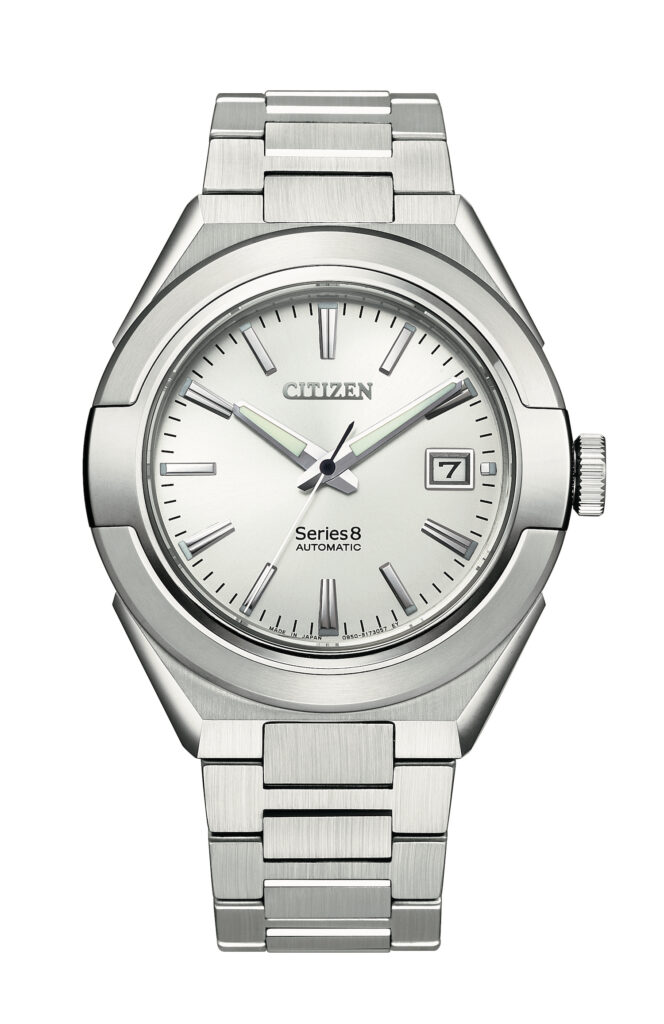 The automatic Citizen Caliber 0950 that powers this model offers the stronger specifications of the two Series 8 movements. It is rated to -5 /+10 seconds per day, and will operate for fifty hours on a full wind. Look for the 870 with either a black or a white dial.

The 831 Mechanical offers a somewhat thinner octagonal case with crown protector, and a blue-dialed option.

The latter, in a gold-tone steel case, arrives on a more leisurely blue calf leather strap. The automatic Citizen Caliber 9051 that powers this model is rated to -10 /+20 seconds per day, and will operate for forty-two hours on a full wind. Both watches are rated water resistant to 100 meters.

A third Series 8 model, the 830 Mechanical, is not scheduled to be offered by Citizen in the United States. This model adds a more complex dial to the same octagonal case used by the 831. It features a new sandwich-style dial with mother-of-pearl, mesh and metal layers.

If the 830 appeals to your sense of style, you’ll have to search your overseas sources to purchase one. Thus far, the Citizen’s U.S. division has announced that it will only bring the Model 831 and 870 to the domestic U.S. market.

Citizen notes that both the movements in the Series 8 offerings have been upgraded recently to provide enhanced magnetic resistance, and both are significantly thinner than earlier versions, even with the anti-magnetic upgrade.

Citizen explains “the watches also have enhanced magnetic resistance essential for our modern digital lives by providing protection against magnetic fields generated by smartphones, tablets, and other devices that can affect the accuracy of the watch.”