With Bulgari’s contemporary style clearly evident throughout its record-setting Octo Finissimo collection, the Italian-Swiss watchmaker’s modernist approach to timepiece design is hardly in doubt. This week, Bulgari underscored that approach beyond its ultra-thin family with the new Octo Roma Carillon Tourbillon, a surprising cutting-edge addition to its Haute Horlogerie collection.

The new watch represents an extension of Bulgari’s well-known mastery of the chiming watch, seeded to a large degree twenty years ago years ago when it purchased Gerald Genta and Daniel Roth, two horological ateliers well versed in complicated watchmaking. That deep knowledge, nurtured and enhanced within Bulgari’s workshops over the years, is the underpinning of the brand’s rise to prominence within the world of haute horology. 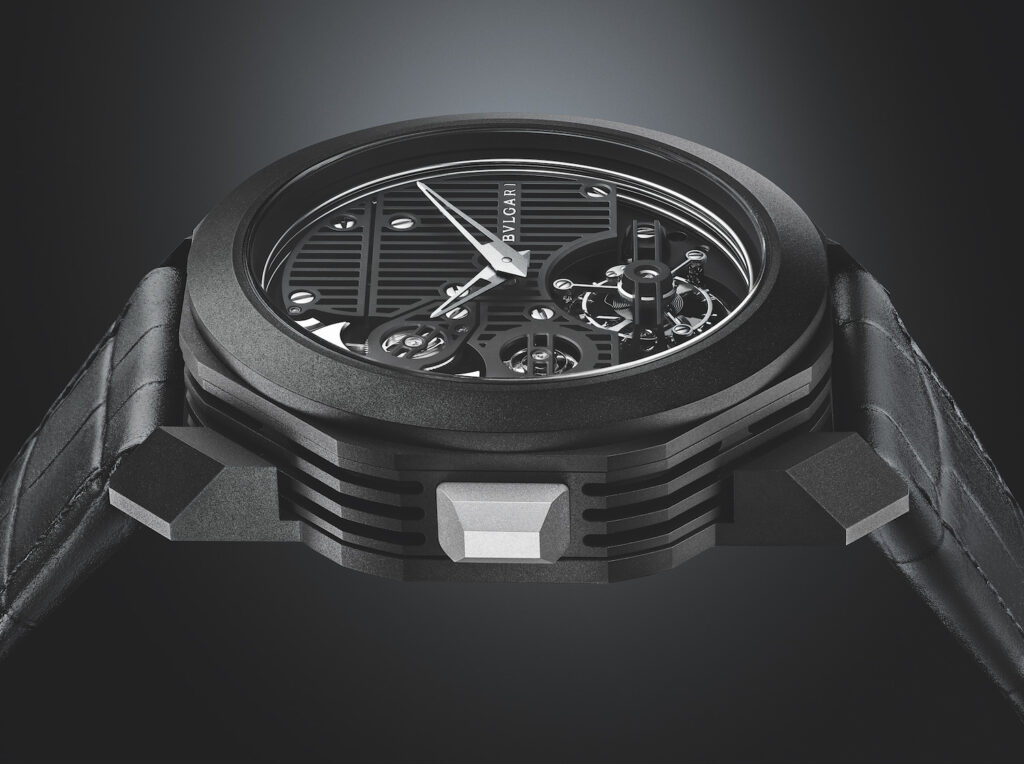 In contrast to the brand’s Octo Roma Grande Sonnerie from a few years back, this newest chiming model betrays few classical design elements on its dial. Rather than a solid dial with markers and numerals, the wearer sees a black titanium grid open to show the watch’s tourbillon and its chimes in action. 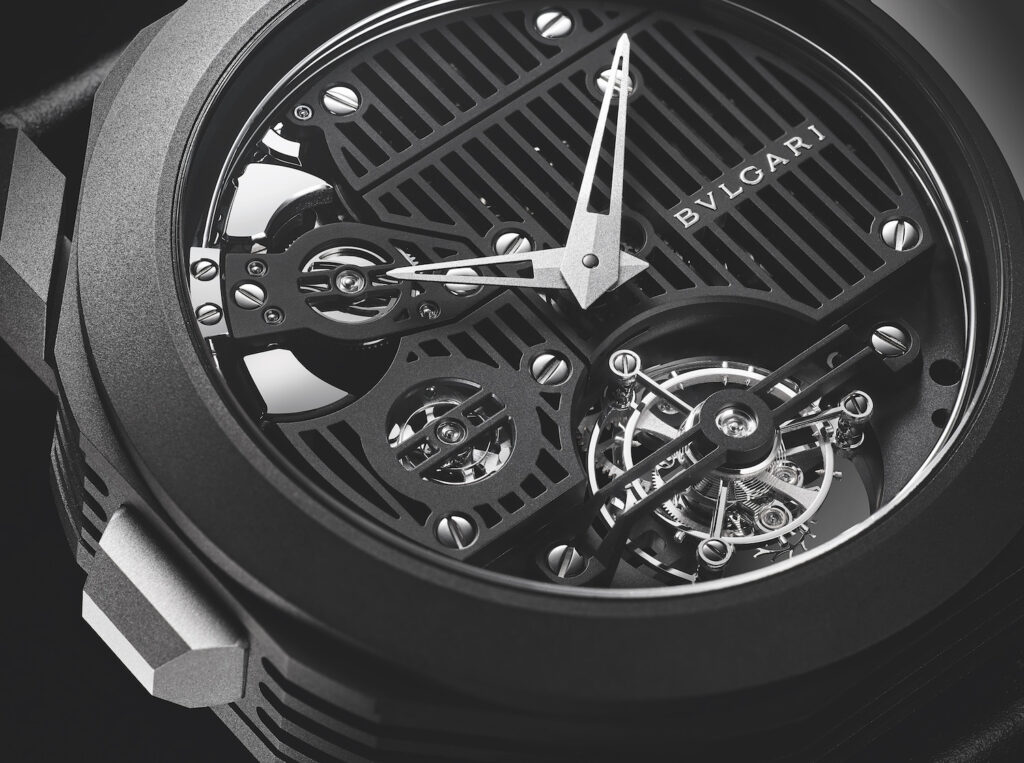 And while the three hammers and gongs appear traditional in shape and function, their placement on the dial side is still fairly unusual among chiming watches.

Bulgari says it has hollowed out the titanium case in order to reduce the amount of metal between the inside and the outside, thus enhancing the transmission of sound. The new case design includes three openings, each of which corresponds to a chime. 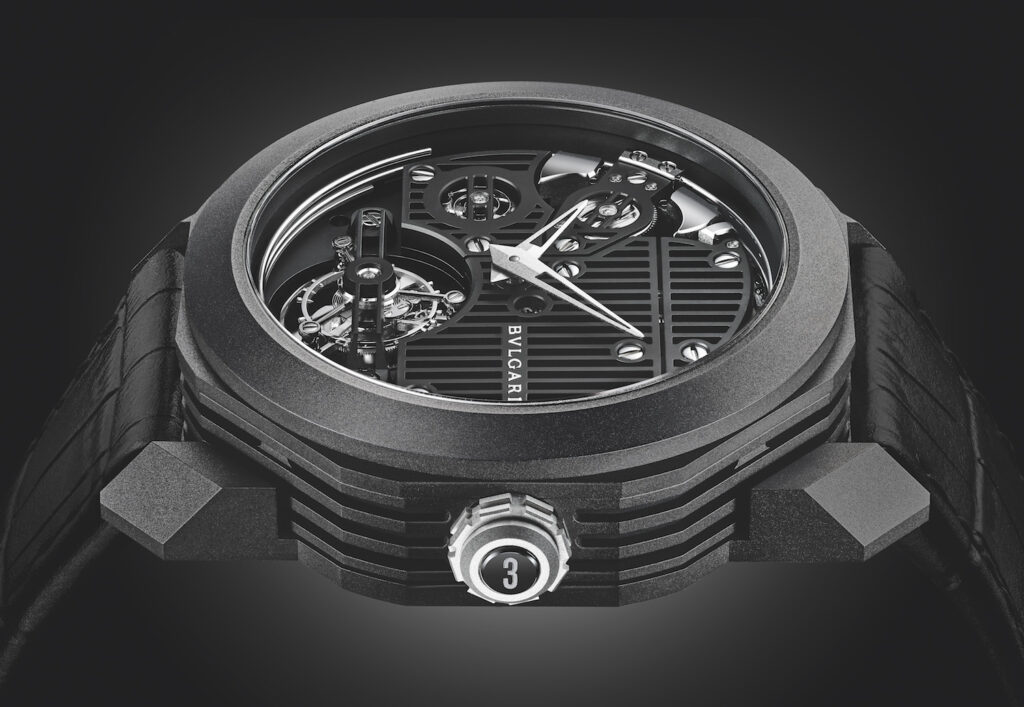 As Bulgari explains, “Chimes are fixed directly on to the case body for most effective transmission of sound and the case is crafted in titanium to ensure the clearest possible diffusion of sound. The back is also hollowed and revamped with a meticulously crafted titanium grid that protect this resonance zone and allow sound to be transmitted to the outside.”

Bulgari’s new, manually wound Caliber BVL428, which includes 432 components, features hand crafted gongs that Bulgari artisans harden at high temperatures, which gives the metal a bright sound. The melody of the Carillon plays the note C for the hours, the mid-re-C notes in sequence for the quarters, and the mid note for the minutes.

Listening the Bulgari Octo Roma Carillon digitally, and not in person, is pleasing, even uplifting. Given Bulgari’s history of making exceptional chiming watches, I strongly suspect a live performance of the chime will live up to the brand’s grand descriptions.

Bulgari has equipped the movement with one classical barrel ensuring a power reserve of at least seventy-five hours for the movement at full charge. The functioning of the sound mechanism is ensured by a spring that the watchmaker has placed into a barrel-shaped container drilled directly in the bridge. 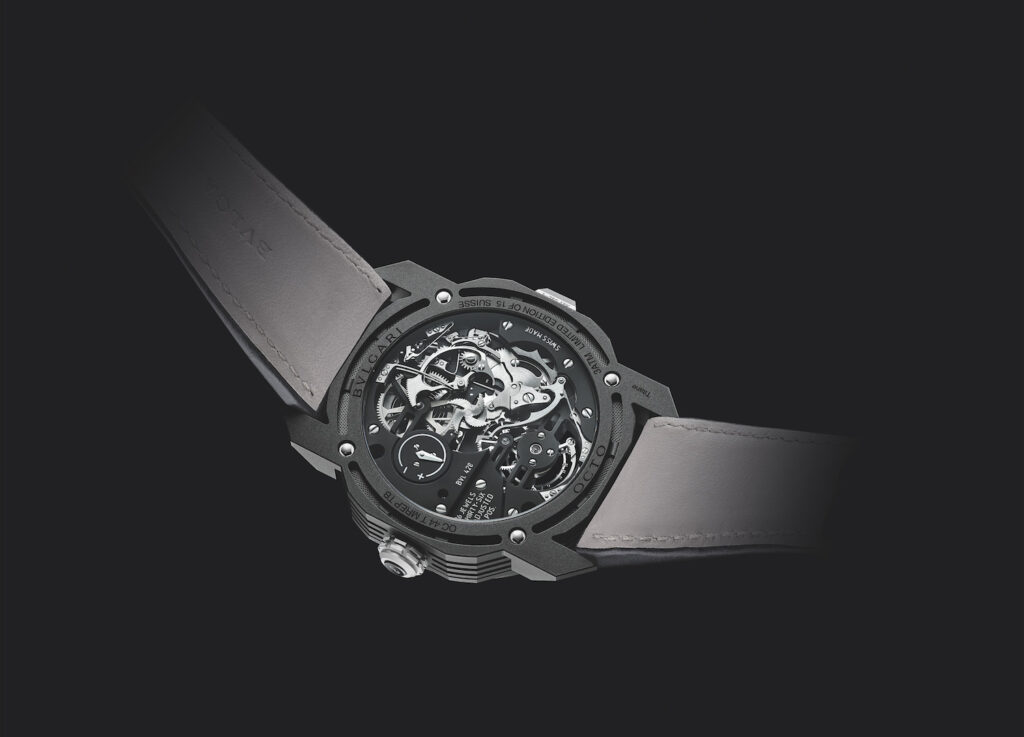 The watch comes on a black alligator leather strap with a three-blade folding clasp treated with DLC Titanium. Bulgari will offer the Octo Roma Carillon available as a limited edition of fifteen, with each piece engraved individually on the crown. Price: $259,000. 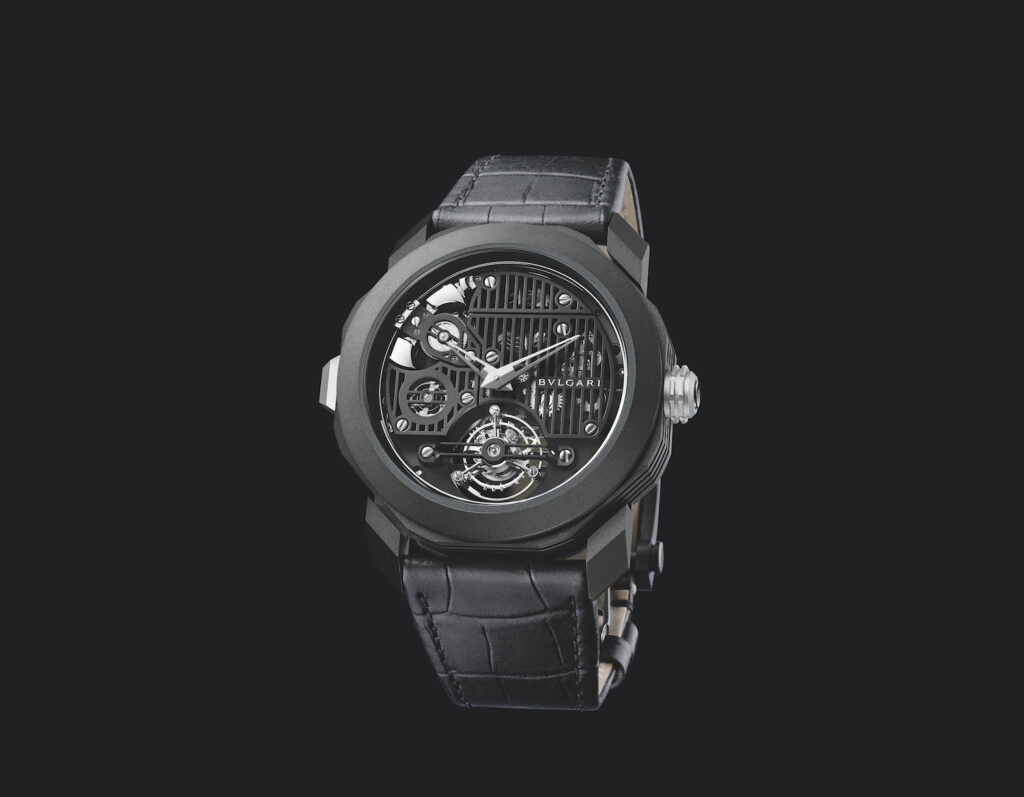